T
wihards, are you ready? I am beside myself over Stephenie Meyer deciding to finish Midnight Sun and release it 10 years later. I have always wanted to host a Twilight party but never got around to it, and now I have every excuse in the book, literally – ANOTHER TWILIGHT BOOK IS COMING AUGUST 4!

I’m so excited I could cry tears joy. But instead, I’ll throw a Twilight Midnight Sun themed party the night the book comes out. I’m hosting it with a very small group of friends (COVID law approved), smaller than some family sizes. I’m currently planning it and I wanted to share the items I’ve purchased with you so you can start planning yours!

I met a Twilight Cast Member

I received Twilight as a birthday gift from an old college girlfriend, Jess. I was going through some rough times in my life (love life to be exactly, an exhausting on and off again relationship) and I remember being mentally exhausted and looking over at my nightstand and picked it up. As soon as I picked it up, I was hooked and I was up late in the night and tired the next day at work and couldn’t stop talking about it with my coworkers. It really was such an incredibly fun exciting escape for me mentally and emotionally and I am so grateful for the books and movies coming out when they did. Side note: Jess’ birthday is coming up and I text her asking her if I could pre-order the Midnight Sun book for her since she was the one who introduced me to the series. She is excited to get it! It’s like I’m paying her back for the life change favor haha!

I would take the day off of work to see the first showing every time a new movie was released. I was also able to meet one of the actors, Kiowa Gordon who is from the Phoenix area, he played Embry in Twilight.

Here I am at JW Marriott at a Volvo Twilight event with my best friend Meagan. Meagan’s husband’s family owns a Ford dealership in the Valley and well, Volvo was a sponsor for the movies – you remember Edward drove a Volvo! And at the time Ford owned Volvo and they had this event and Meagan brought me and I was in Twilight heaven. I was going through a tough time again (hence why I was so frail looking in this photo) and Twilight again to the rescue! 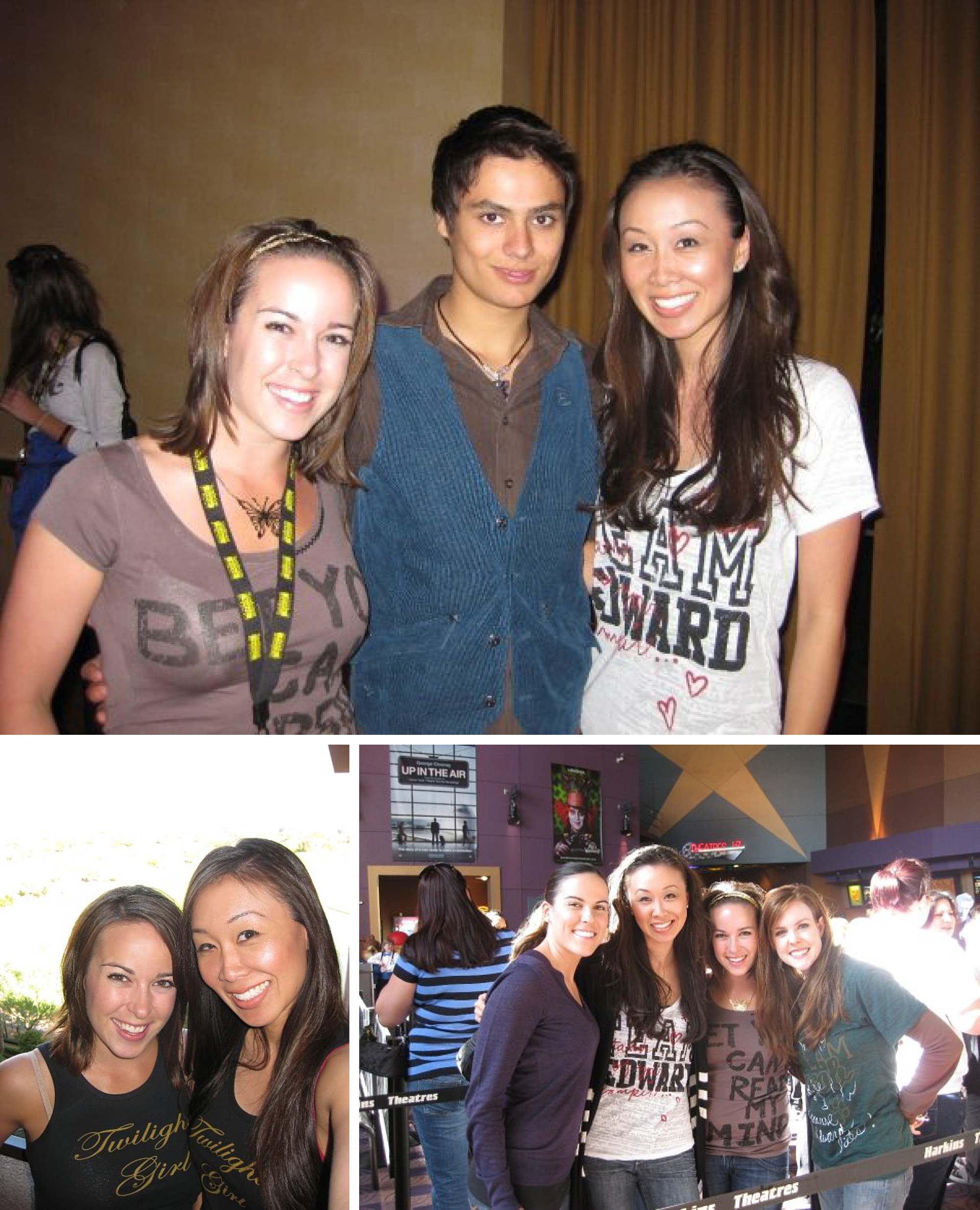 I mean how cute are we with our Team shirts at the first showing, and our gifted Twilight Girl tanks that were in our swag bag? I don’t have any of my shirts anymore – I mean it’s been FOREVER, but I sure wouldn’t mind having one right now.

I wish I had visited Forks during the peak of the movie popularity with friends because that would have been amazing. But, since the newest release of Midnight Sun, perhaps the hype is back and someone can go with me? Last summer I was in WA and we drove past signs of Twilight locations like the high school last summer in WA on the way to the airport and I was devastated we didn’t stop to stop by the high school to take photos (if I had been driving I would have turned the car around!). It made me realize that I really would enjoy those fun spots, so maybe one day.

Here are the items I’ll be using as I decorate for my Twilight Midnight Sun dinner party. I’ll be serving Italian since that is where Bella and Edward had their first date! I’ll also have a ring light set up with a black backdrop and red gel over a light (for hair light) for portraits. I want this to be so much fun for my friends! I asked them to come dressed up and do their makeup and hair in a Twilight beauty style, I cannot wait to see how they look!

Here is a link to the fonts of the characters handwriting for place cards, invites, etc. Make sure you subscribe to my newsletter so you don’t miss my upcoming Twilight posts! There’s still so much to talk about!

Leave me a comment if you are buying the book! Are you Team Edward or Team Jacob?

Diana Elizabeth has three things that excite her to the point of screaming and heart racing teenage excitement – John Mayer, Mariah Carey and Twilight. Life is so short and it’s important to celebrate, pour in and lean into those things that make you giddy – don’t let them go, it’s fun and embrace them, it’s FUN!