Categories Menu
I
am so excited to share these images with you – I knew I’d take some photos as a Twilight vampire but I thought a trial run would be good and I could dedicate more time to the look. Little did I know I was going down the rabbit hole! A few nights later I thought, why wouldn’t I try to look like a member of the Wolf Pack too? Sure I’m a Team Edward girl, but come on, who wouldn’t want to run with those shirtless wolf pack members. *wink* Once I told my girlfriend about my ideas, she told me, Volturi next! And well,  I already had the red contacts anyway, if you saw in this last Twilight post where I made myself into a GIF!

I have to admit that doing these fun creative projects has fueled me. It is something different that I’m genuinely enjoying with the anticipation of Twilight’s latest book, Midnight Sun and being able to be creative in a different way. I am LOVING it and I am glad you are here for the ride too! My Twihards, if you are as excited as I am, I sure would love and appreciate if you shared this blog post with your audience, Facebook, Pinterest, Twitter, anywhere! 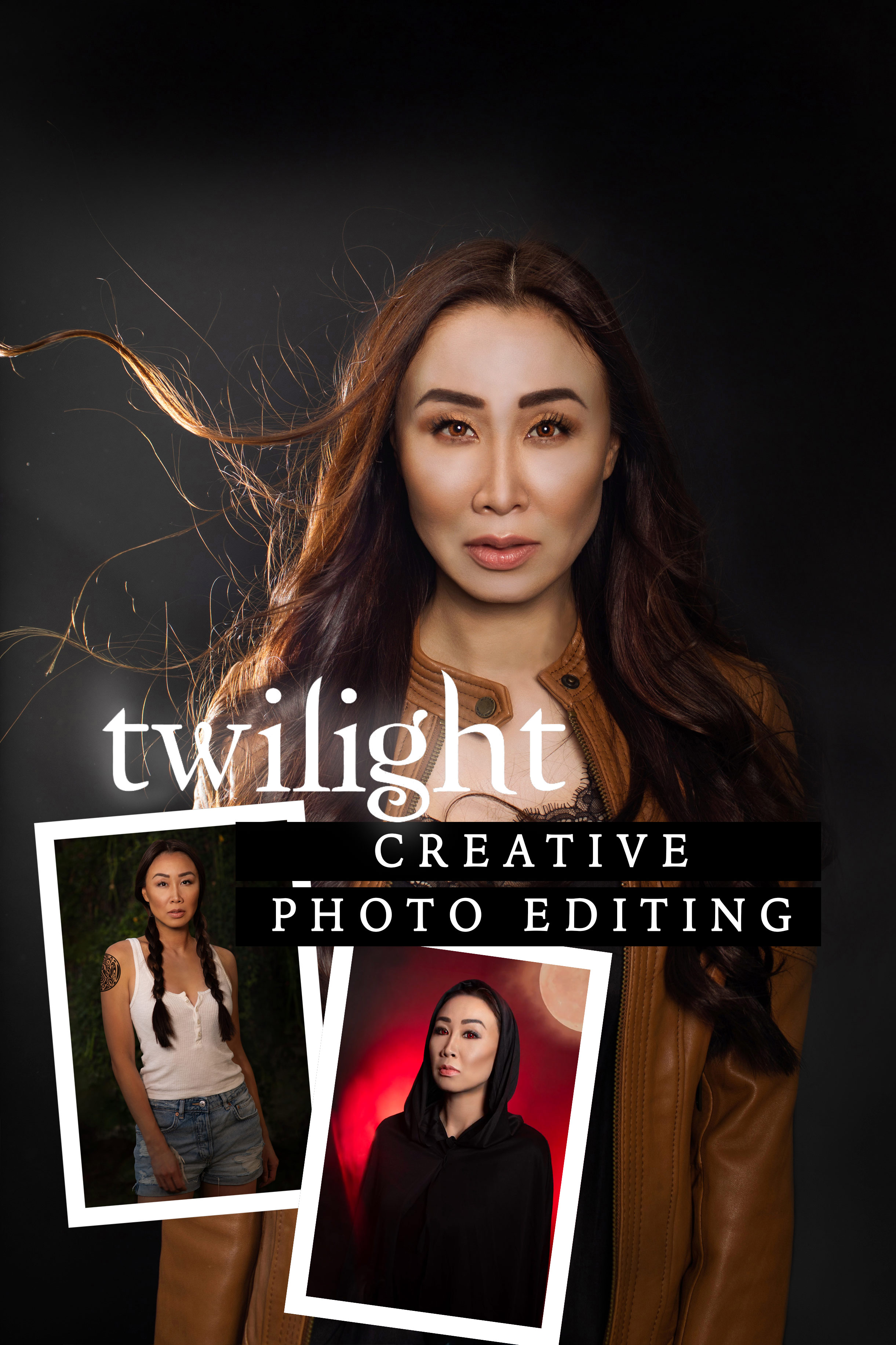 I have used Photoshop for over 20 years, I know what you’re thinking, you knew how to use Photoshop as a baby? Ha-ha. Anyway, I never think all images are complete out of the camera – sometimes they are, they really can be, but most of the time, they are not. Wrinkles, makeup coverage, lighting, all of it. Not everything you see in magazines or advertisements are 100% as is – and if we can be honest, sometimes that’s a good thing. I know there are pros and cons to both, and it also depends on your photography, but I’m not going to get into that.

I want to emphasize the importance of creative editing for images that can be taken to next level. Movie posters, magazine covers, music albums, images that tell a story, editing can do that! Also creative photo editing doesn’t always have to be completely out there, you can do minor to major edits in Photoshop that can make your images next level, and stand out from other images. I suggest everyone look into it, and knowing these skills will absolutely take you next level with your photography and pricing. There are brands and media who look for these specific skills so if it’s an interest to you, learn them and have so much fun with it!

These images were taken in my studio or backyard. 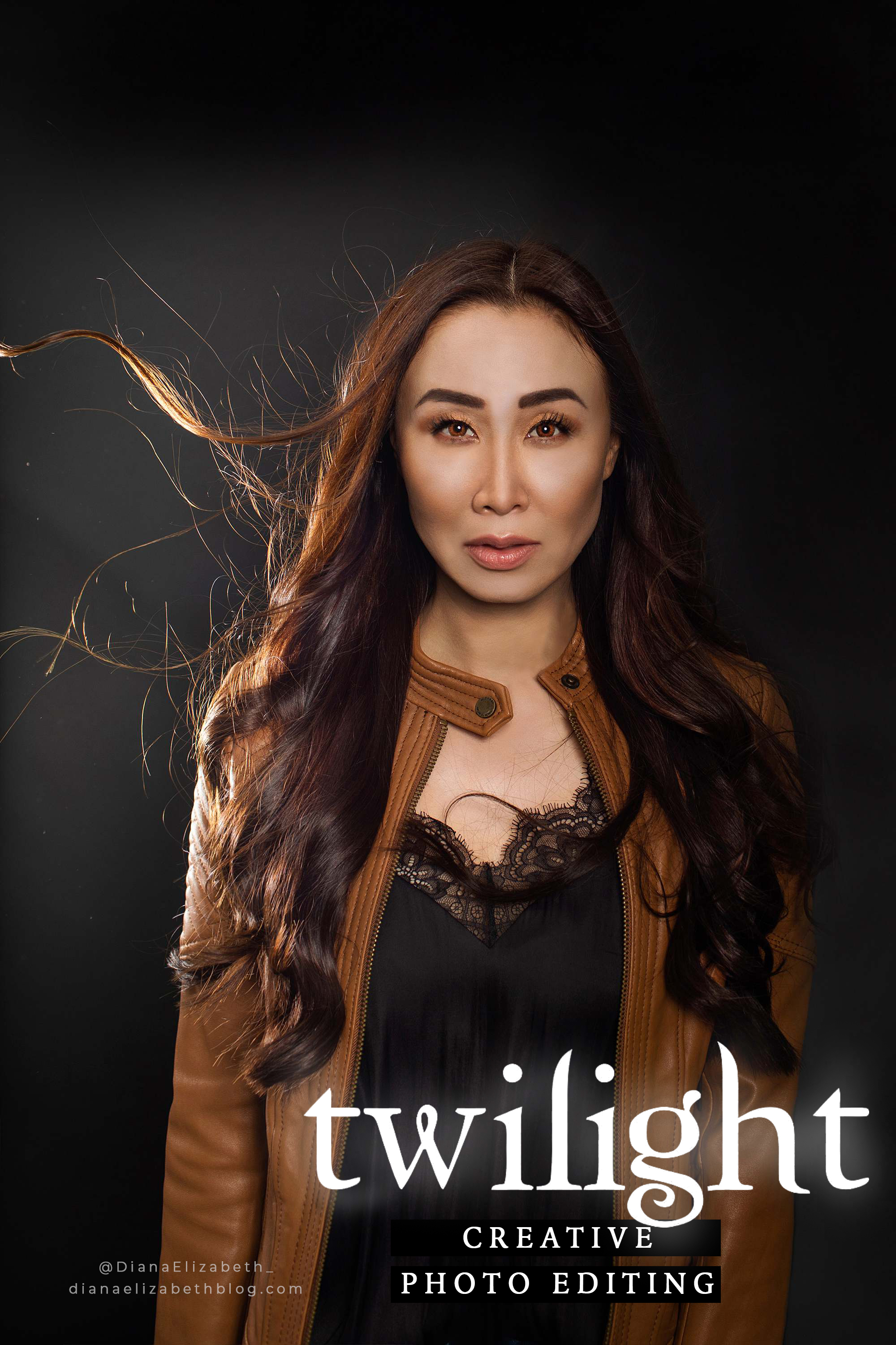 Perhaps my favorite because I always wanted to know what I’d look like as Edward’s girlfriend. Haha!

I used a beauty dish with a 30 degree grid on a strobe to get that light right on my face. The back right of me I set up another strobe because I wanted some hair light. I had Benjamin use a scrim to blow the wind in my hair as he triggered the flash with a remote. I used the 35 mm for this since I wanted more of my body to show.

Of course makeup was a big factor because I needed that lighter base and then I edited out the redness and color to desaturate my skin tone more. Oh the blooper videos are coming.

The hair makes it if you ask me. Oh, and the golden honey contacts.

Now going to ask my agent if I can use these as my acting headshots…will they cast for another Twilight? I need a role with very little speaking though. 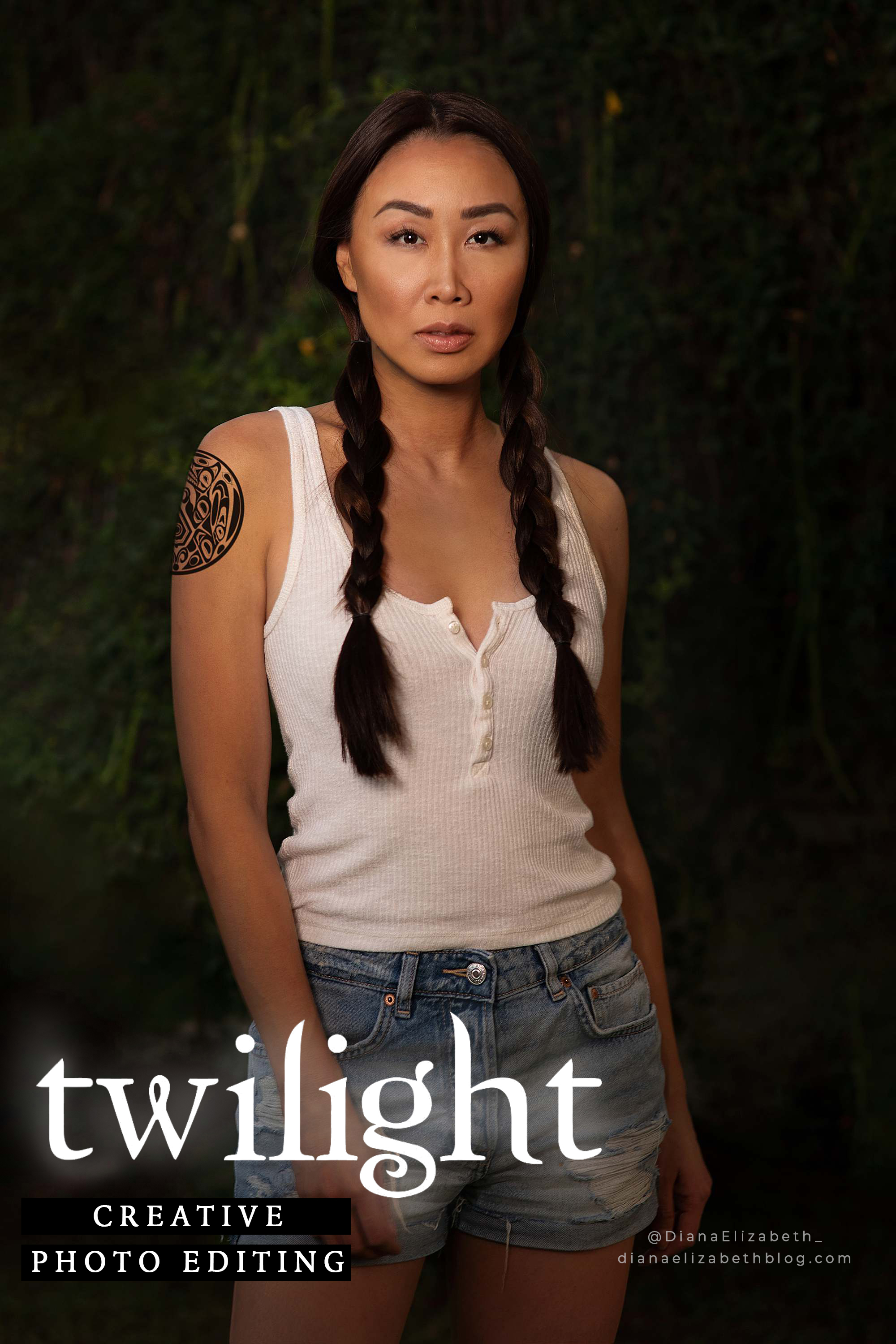 I’m so glad I did this look! It was 7 pm in the evening and I said I didn’t want to be in a studio again because it just looked too dark and not personal. I wanted something else, so we decided the greenery against the backyard fence would work – it’s covered with old cats claw vines (I don’t recommend but sometimes I am grateful it’s there). I had 10 minutes to get ready but thankfully the wolf pack isn’t all glammed up, it’s very natural.

However, I haven’t been outside much because it’s so hot in Phoenix so I’m pretty much a vampire skin tone staying inside. I put on some instant tanner (washable) and threw on my best wolf pack outfit and we went outside.

We plugged in one strobe with the beauty dish, I stood a few feet away from the greenery for some depth of field since I don’t recommend standing right up against backgrounds or walls if you want depth of field (sometimes it works, this time not). I’m thankful for Benjamin jumping in and knowing what to do and how to set up, he’s a great photo assistant. Now I look like I’m in La Push, right? 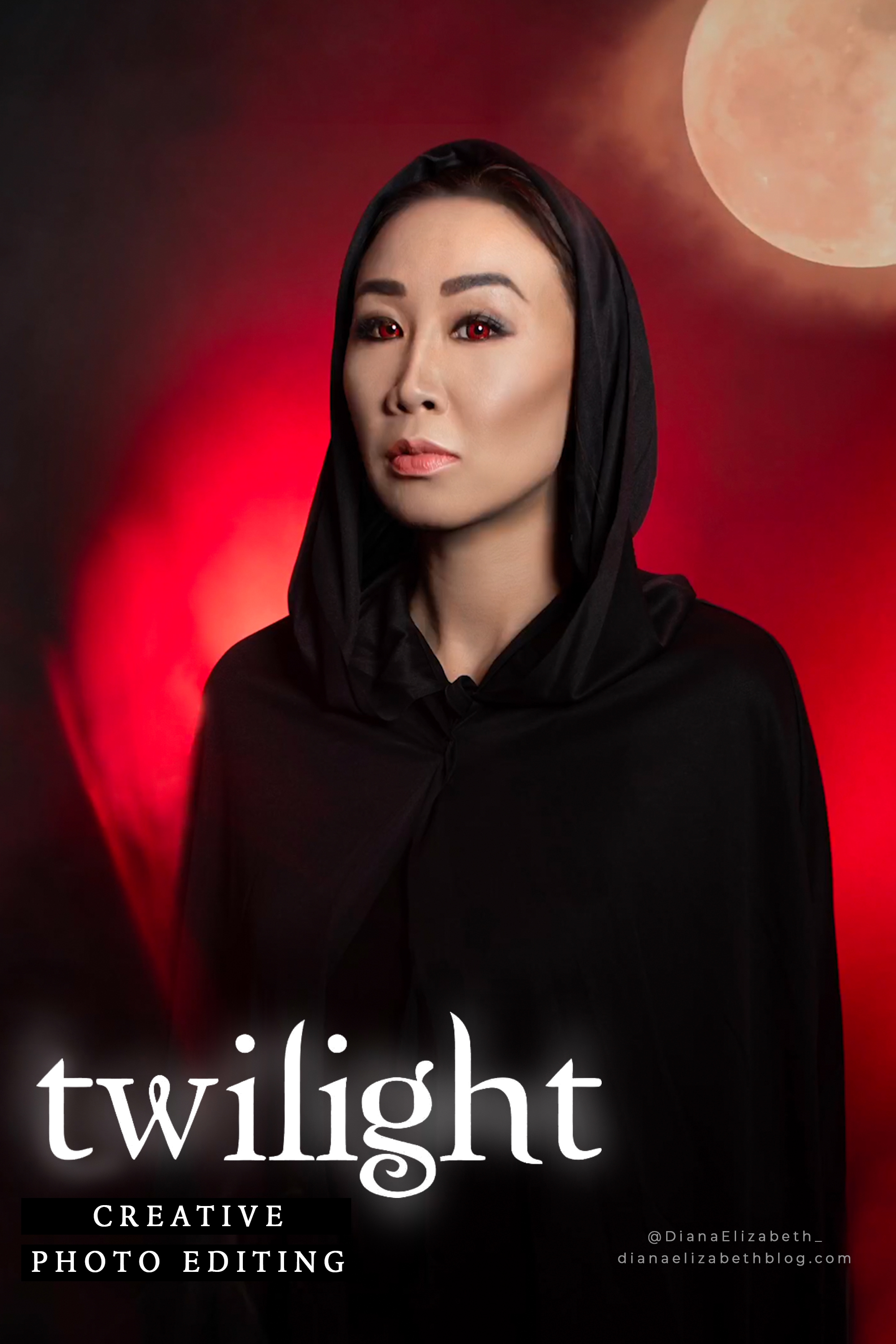 My girlfriend Jennifer told me to do the Volturi next. I thought, why not! I already had those red contacts and I hopped on Amazon to find a $11 black cape. I was going to be cheap and try to find alternative ways to make a cloak but when it’s $11 and can be delivered the next day why even waste time?

I lightened up my foundation base, did a smokey eye and contoured my cheekbones. Have to remember – no blush with vampires! There cannot be any signs of warm blood or life going through those vampire veins.

I set up a strobe behind me with a red gel overlay, for some hair light and to pop from the black background. Gotta go, Aro needs me.

Diana Elizabeth isn’t one who really do the costume thing for a while, she used to love Halloween but then it’s been a few years of laziness for her – and suddenly she puts on three costumes and she’s like, who is she? But it’s so fun, and she’s pretty sure she’ll be a little tired after this, but she gets to dress up like a vampire again for her dinner party August 4!

There are 1 comment on Twilight: Creative Photo Editing + Video.