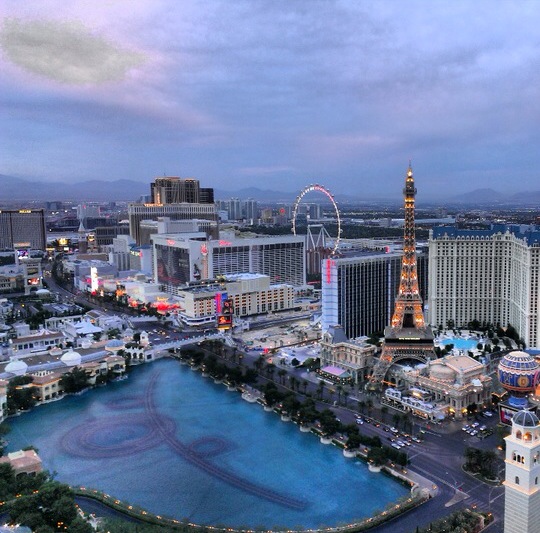 Oh Vegas, I probably need more fingers and toes if I had to count how many times I’ve been.  I’ve seen it in every way possible, and always, there’s something great to find depending on the occasion and where you are in life.  If you follow me on Instagram, you probably saw me posting like crazy this past weekend.  In fact, all of us were blowing up social media – we’re such natural marketers.

First, a few drinks as we pick up one girl at a time.  A 4.5 hour drive from Phoenix, five of us drove and one flew from the OC. 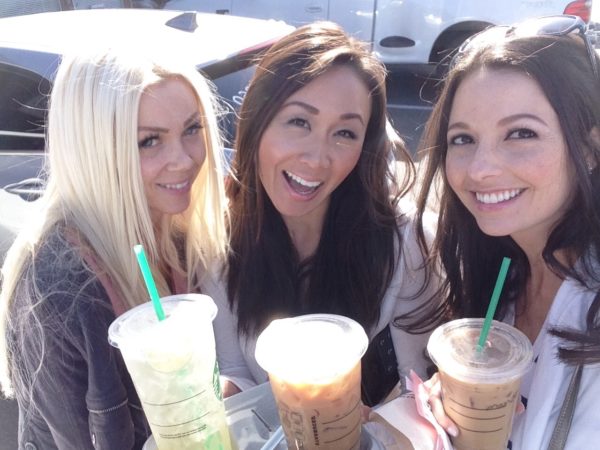 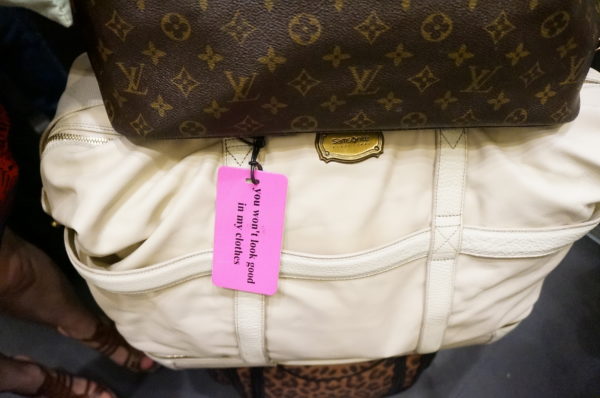 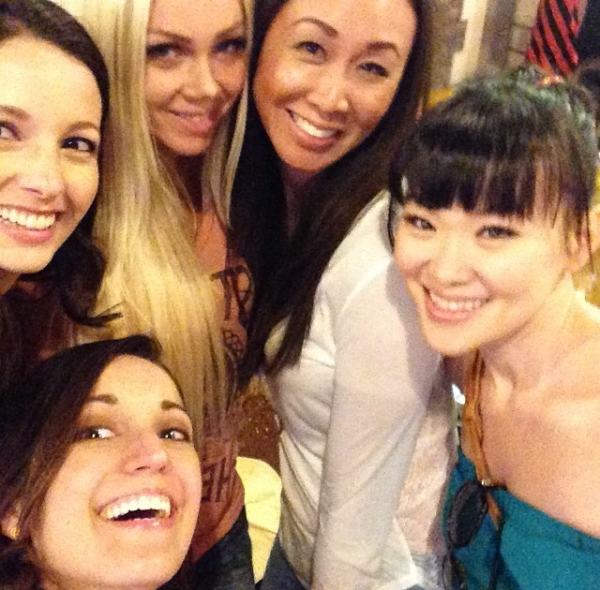 We don’t wait in lines. I mean, Jennifer doesn’t because she’s VIP and had the hook up for our rooms with included food expense.  Nice! 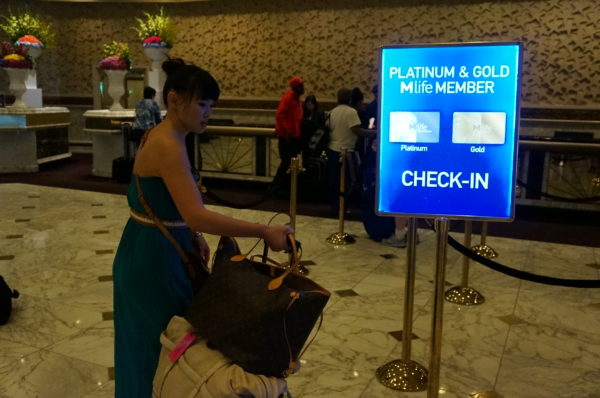 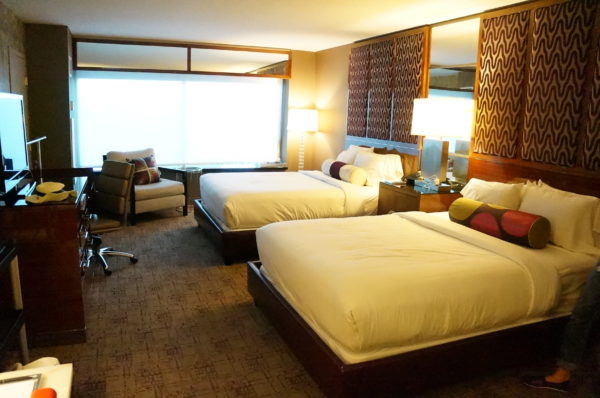 I also loved the lighting.  I’ll call this square ring lighting since the mirror had light around it.  Makes your eyes look pretty! 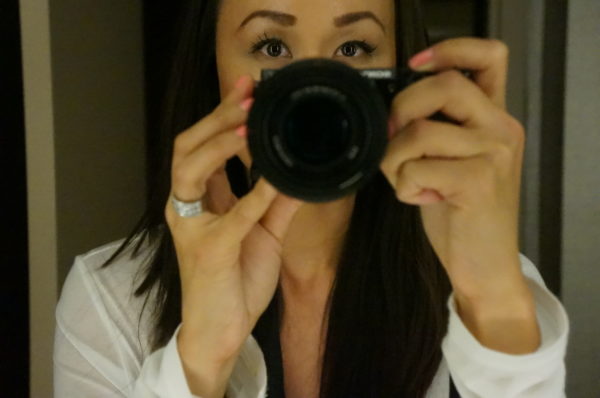 Okay, #6 has arrived.  First stop, Wolfgang Puck Bar and Grill which has always been one of my favorite places.  Good choices: Chionois Chicken Salad, and the White Pizza. 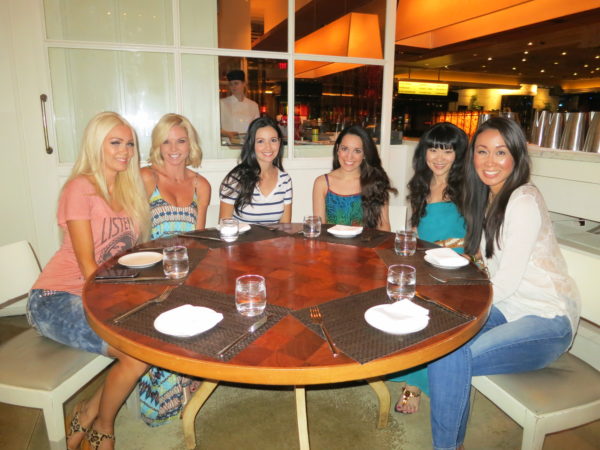 When you travel with a group, what we found was it was much easier to do family style – we don’t eat much, and for 6, a bill might be around $100 or less. 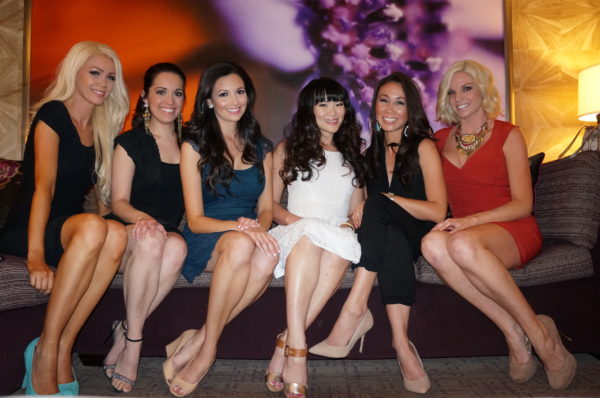 Then, off to Honey Salt Restaurant, a farm to table restaurant (you must make a reservation) in Summerlin, just 25 minutes off the strip, so worth it.  Isn’t it adorbs? 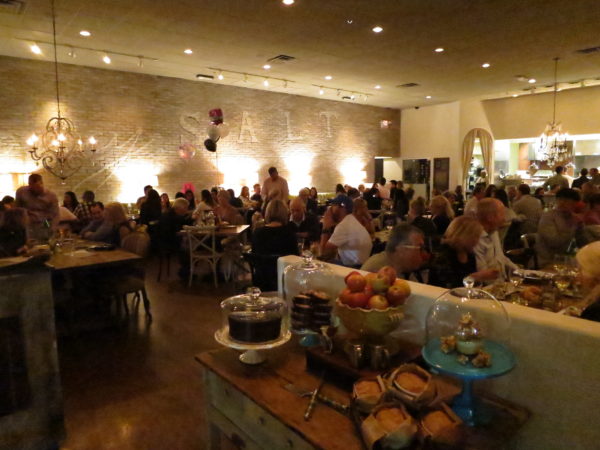 Our 8 p.m. reservation was a little behind – and I told the girls it was for 7:45 because I just knew we’d run late.  I’m so smart because we arrived on time!  So even though we had to wait, they came out and gave us complimentary champagne!

Toast to 8 years of friendship! 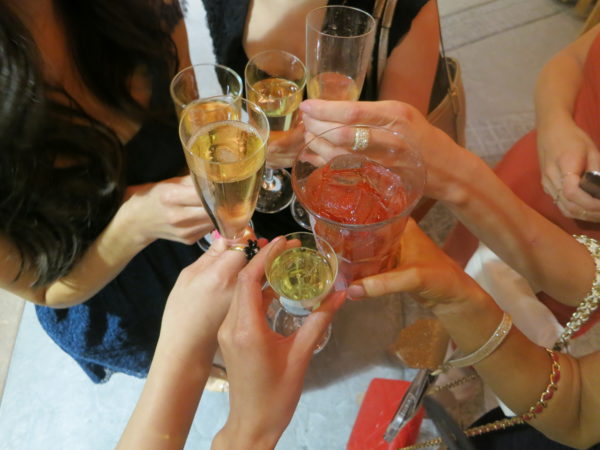 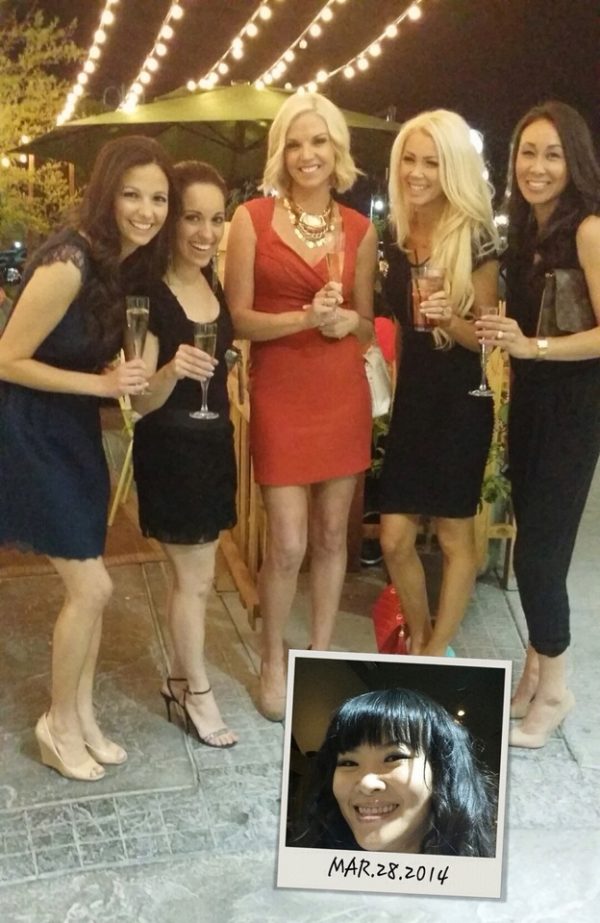 Jennifer’s Samsung has this adorable App where it takes a pic and of the person taking the pic to include them.  Hilarious.  It’s also a good thing we can easily entertain ourselves by taking pictures of each other. 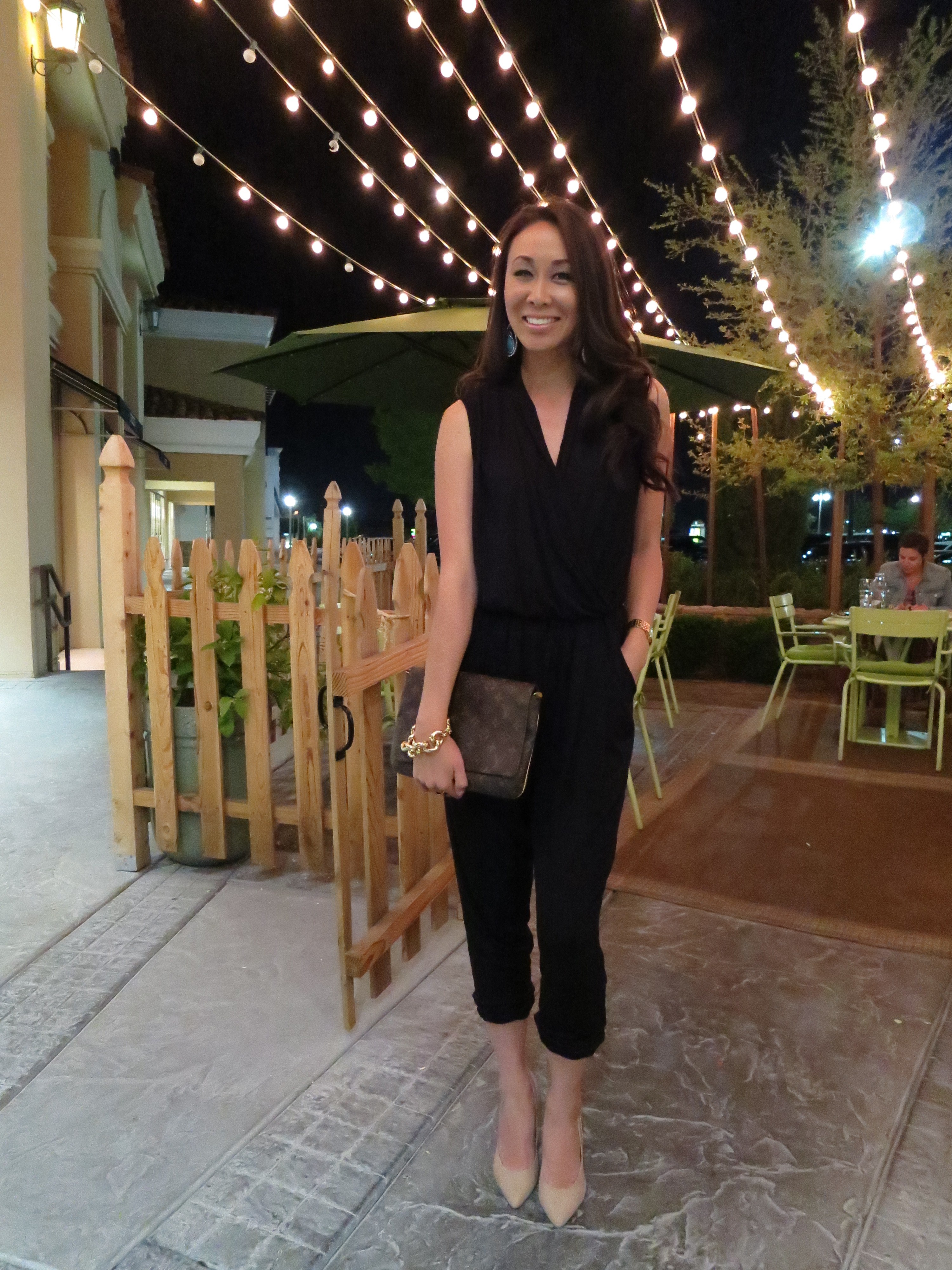 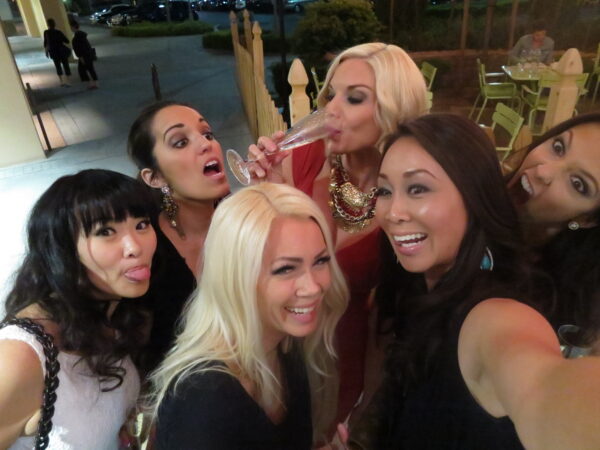 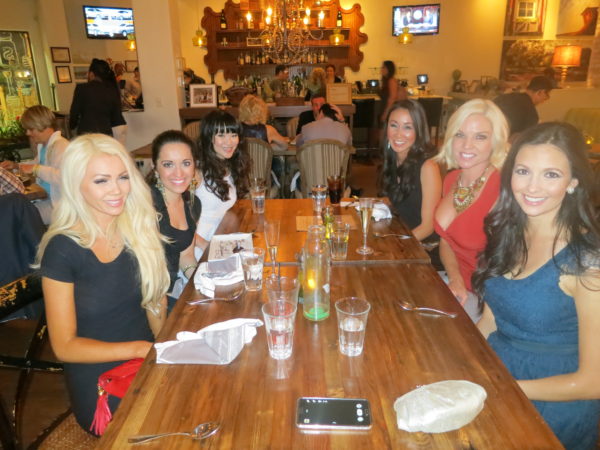 To try: Shrimp & Linguini, Free Range Oven Chicken, Mac n’ Cheese.  I could have licked the butter that came with the bread.

If you’ve never been to Vegas and you’re a girl, well expect every guy who reps some club to convince you and your girlfriends to go to that club.  If you’re lucky, they’ll comp you a table and a $200 bottle of alcohol.  Ironically none of us are drinkers, but we’ll take at table at the new MGM Grand club Hakkasan to check it out!

You know the scene in Knocked Up club scene? (Sorry there’s a lot of bad F words in that scene).  If you haven’t seen it, she gets denied because she’s old then she sits on the curb depressed with her pregnant sister and says, “I just wanted to dance!”  We laughed because we felt so old in comparison to those newly 21 somethings.  Well, we just want to dance!

Us old ladies got to the front of the line and free table service.  Guess we’re not that old.

You can find cool souvenirs on the tables like so. 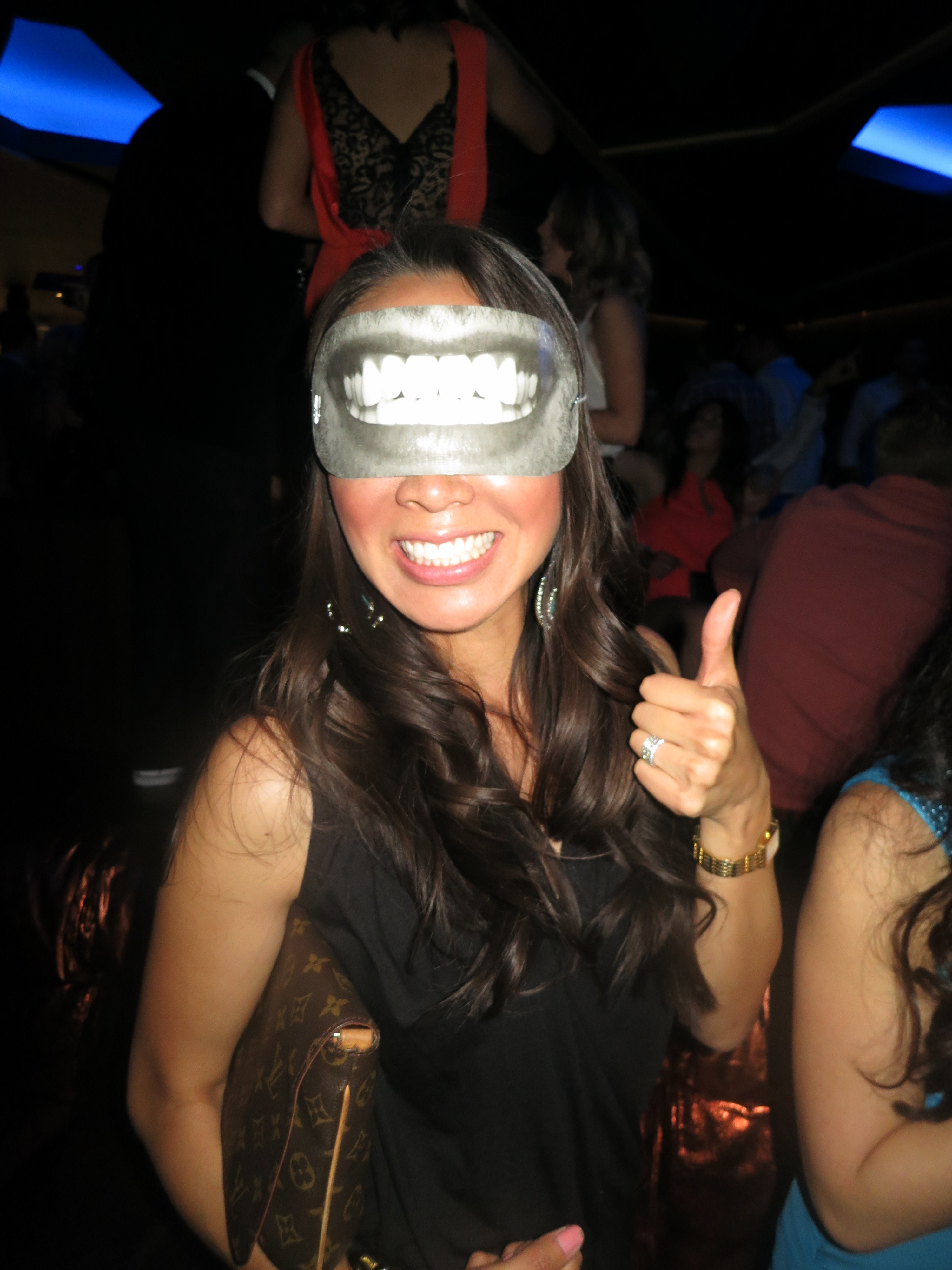 After a little bit three of us had some issues with the smoke (I have a bad sinus issue and always get sick if exposed too long to it) so we took off  a little earlier than the rest while the others stayed up into the wee hours – Vegas style!

Next day, pool time of course! 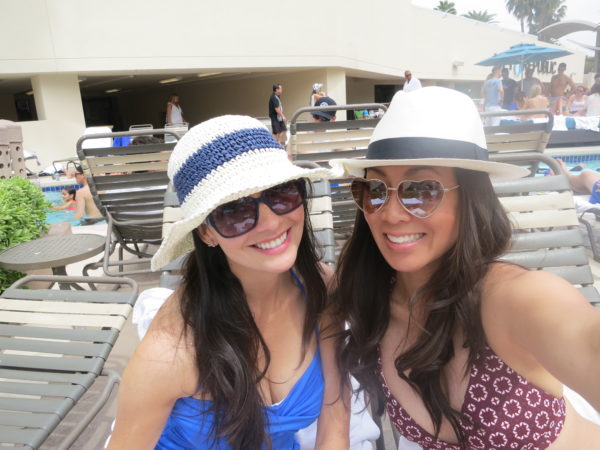 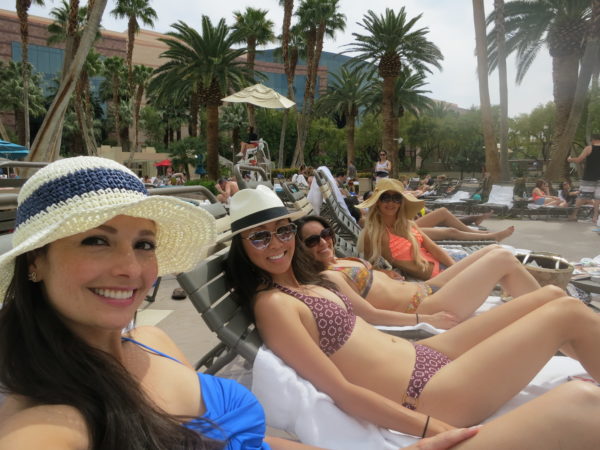 Now, off to see a show!  This room had all the on time girls so we took pictures to kill time, as always. 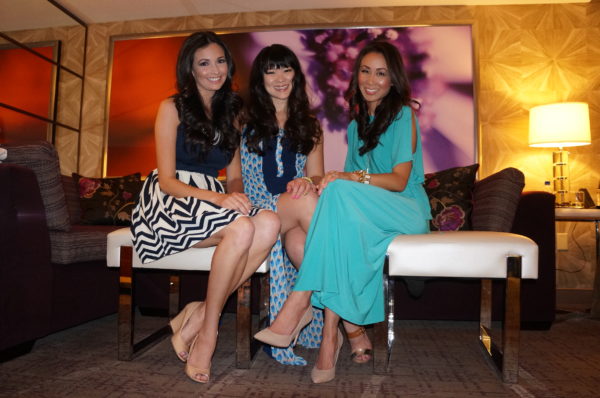 I love shows in Las Vegas, they are so worth checking out if you’ve never been.  I love the Cirque shows of course (Ka is my favorite), but we decided to head to The Wynn and check out Le Reve, which has been voted the best show three years in a row.  Sommer’s friend from high school is one of the cast members! 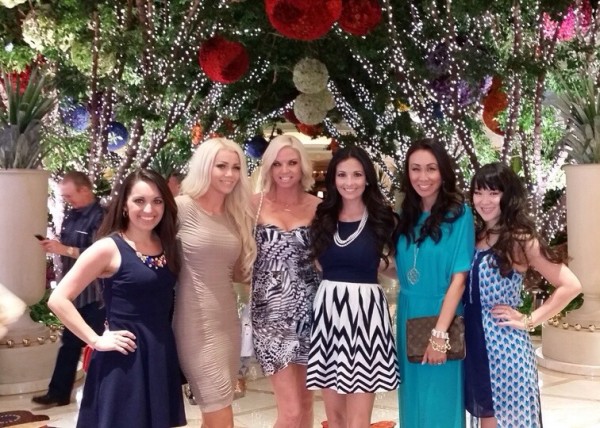 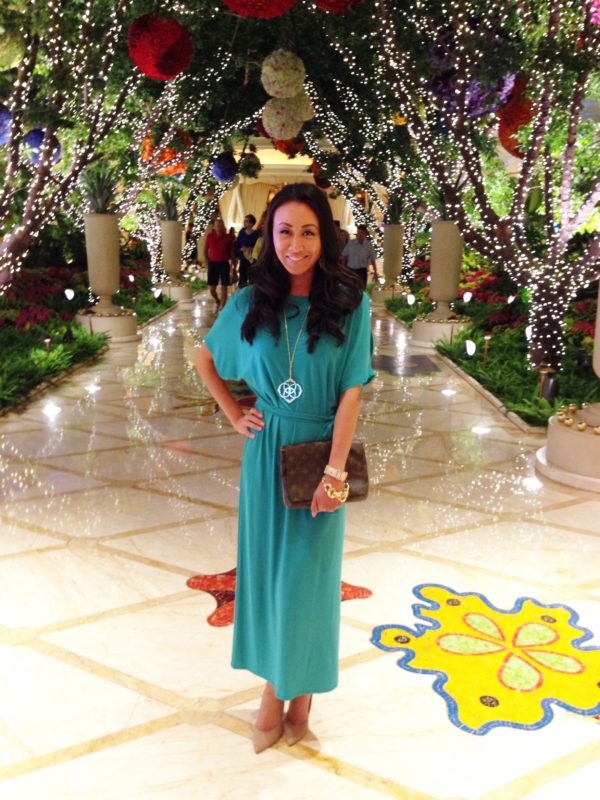 Don’t worry, I didn’t break any rules.  You’re allowed to take pictures and there’s no bad seats since the auditorium is a circle.  So incredible! 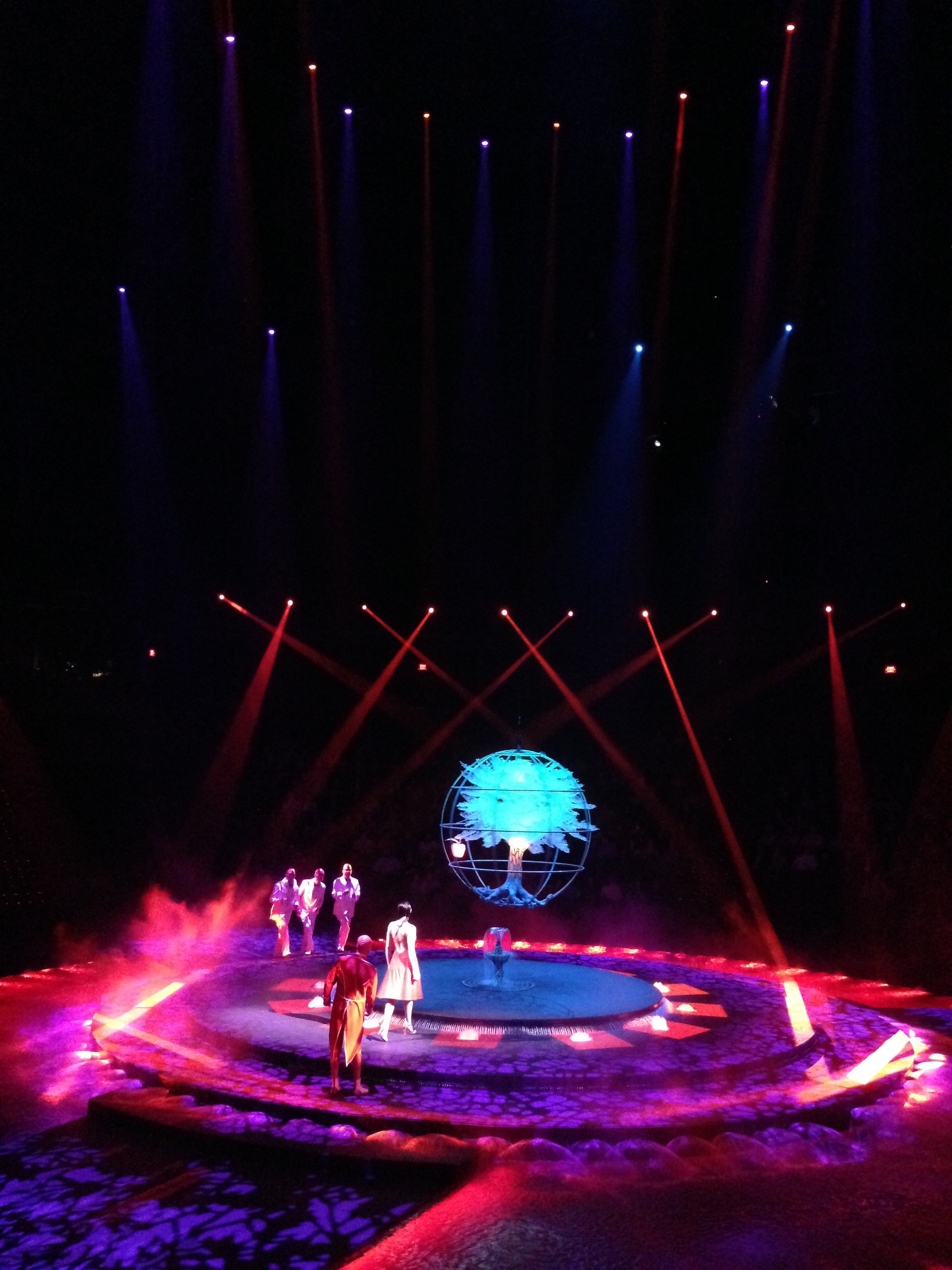 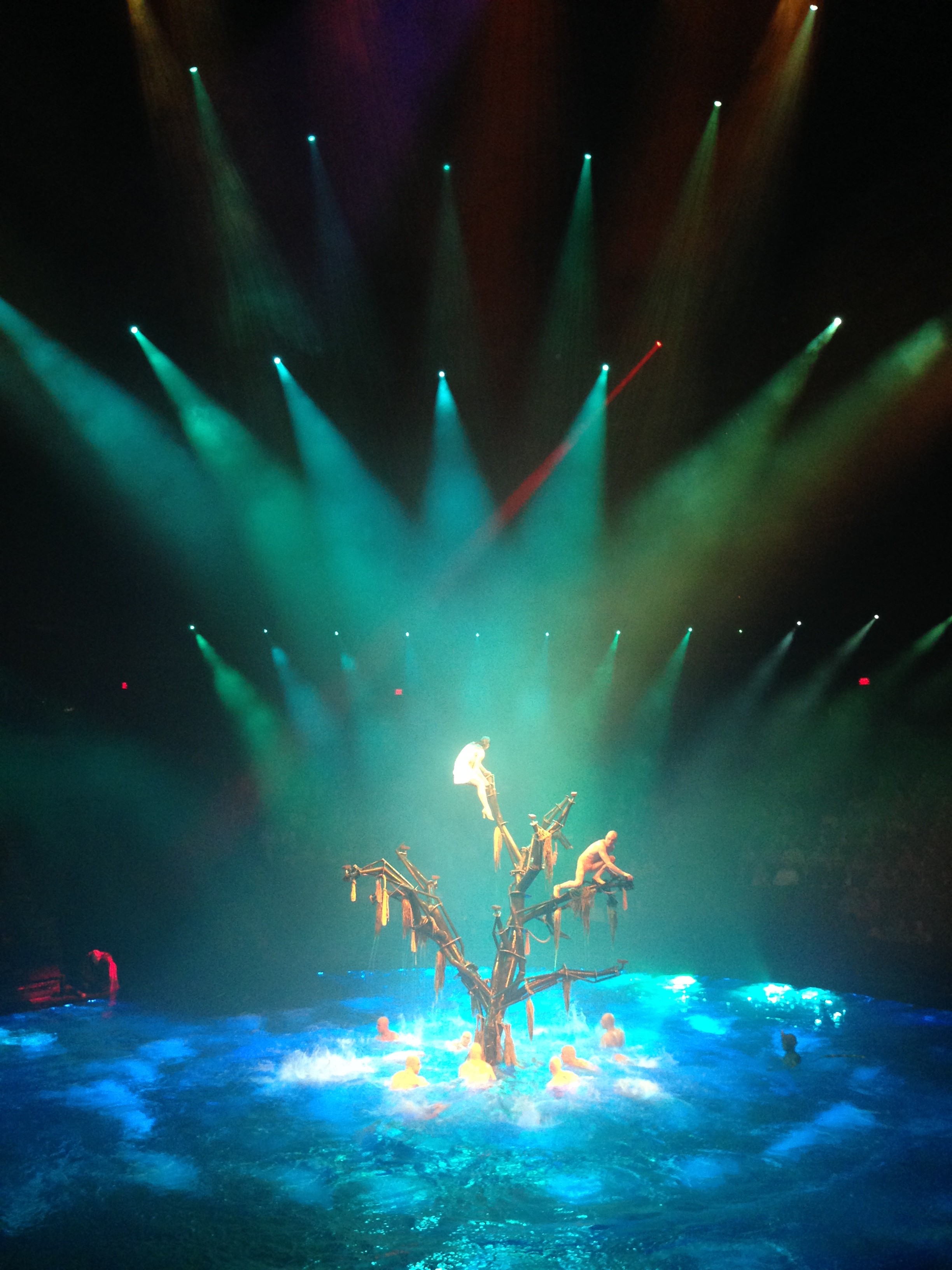 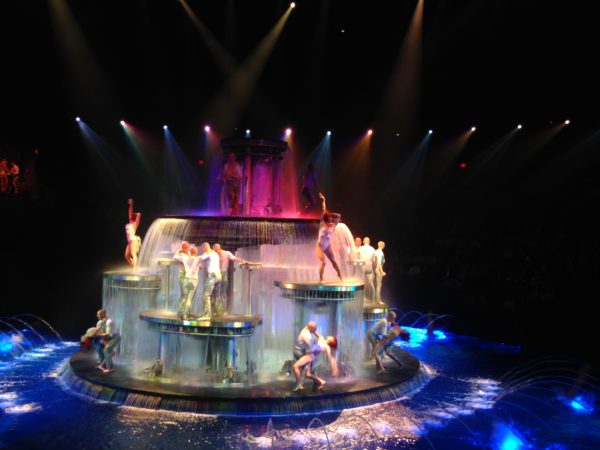 We got to meet up with Chelsea and she gave us a backstage tour!  We had so many questions – and she answered them all.  She’s been dancing in the show for 7 years! 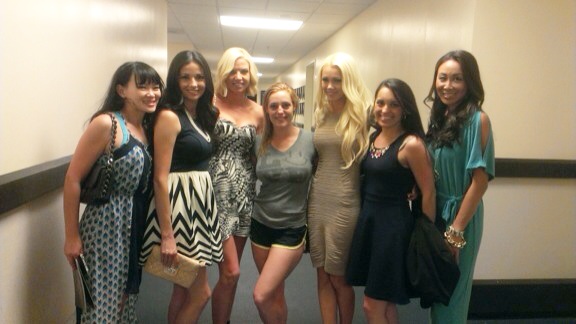 What a show, I’d highly recommend it!  And then, we ordered room service in our pj’s and fell asleep.

The next morning we were a bit slow.  It seems like everyone was in Vegas for March Madness and a good time.  So we lolly gagged outta there said goodbye to our gf Melayne (my Ireland travel buddy) who left to head back to the OC.  One last stop – Dairy Queen! 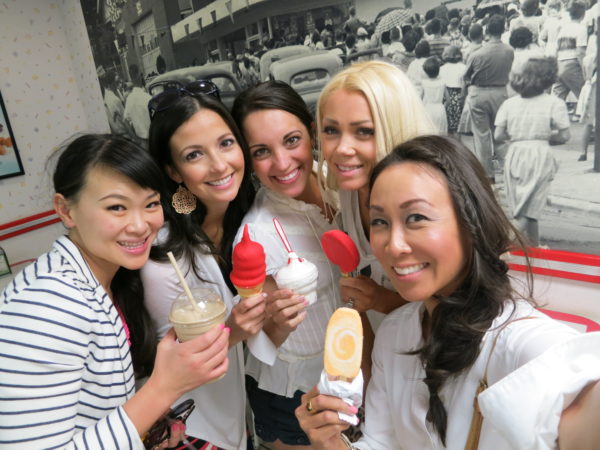 We all met doing pageants and been friends for a long time.  There’s been so much growth, appreciation, and I wish I could elaborate in depth what these girls mean to me.  Time makes you change, life stages, ups and downs but to have the same friends by your side consistently who knew you back when who know your core and who can be there for each other, there’s something to be said about those kinds of friendships.  There are many people who come in and out for whatever reasons but what’s most important are the ones who stand the test of time, and these gals are ones that I’ll be happy to stand by, up for, or sit on the curb for when that night comes when we are denied for being too old to be allowed in a club – even though we are already have old souls and we stopped clubbing years ago.

Until next time Vegas!

Diana Elizabeth says it is possible to travel with that many girls – but you must be relaxed and not have too much of an agenda.  And if you know your girlfriends may run late, always bump up the time by 15-30 minutes, for their own good, and yours too.

There are 9 comments on Viva Las Vegas!.