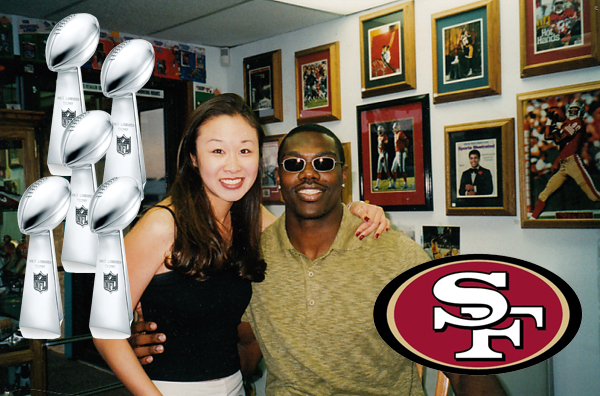 With Terrell Owens in 1999, my senior year in high school

I insist, there’s nothing finer than a 49er.  When I was in high school I was once asked, “What’s the sexiest uniform?” Instead of saying a firefighter or marine officer, I answered, “A 49er uniform.”

I had a huge crush on the kicker, Wade Richey (LSU) who was a phenomenal kicker with phenomenal youth and good looks. I wrote him a funny letter and told him I was a huge fan and that we should get married on the 50 yard line at Candlestick.  I was 17. He wrote me back two pages on 49er Super Bowl Paper.  That’s what I’ll call it.  He sent an autographed card and photo and they’re still displayed in my room at home.

I was born a Niner fan, you see, my dad was born in San Francisco.  When I wanted to ask him anything, if there was a Niner game on the rule was – we couldn’t ask questions, have a conversation, nothing.  You either had to ask for homework help before or after the game.  And if you came down to find the TV was turned off but the game was still going on, well, that was just bad news and you might want to wait a few more hours before you ask dad anything.

I wish I had a ton of dough and pull that I could fly my family out to New Orleans to watch the Niners play the Ravens.  My dad would have a blast, but he insists he has the best seat in the house, in the comfort of his own living room.  No rowdy fans, no crazy traffic to deal with.

Ironically now retired kicker Wade Richey was a free agent and moved from the Niners to the Ravens.  I wonder who he’s rooting for this Super Bowl.

There are no comments on Go NINERS!.