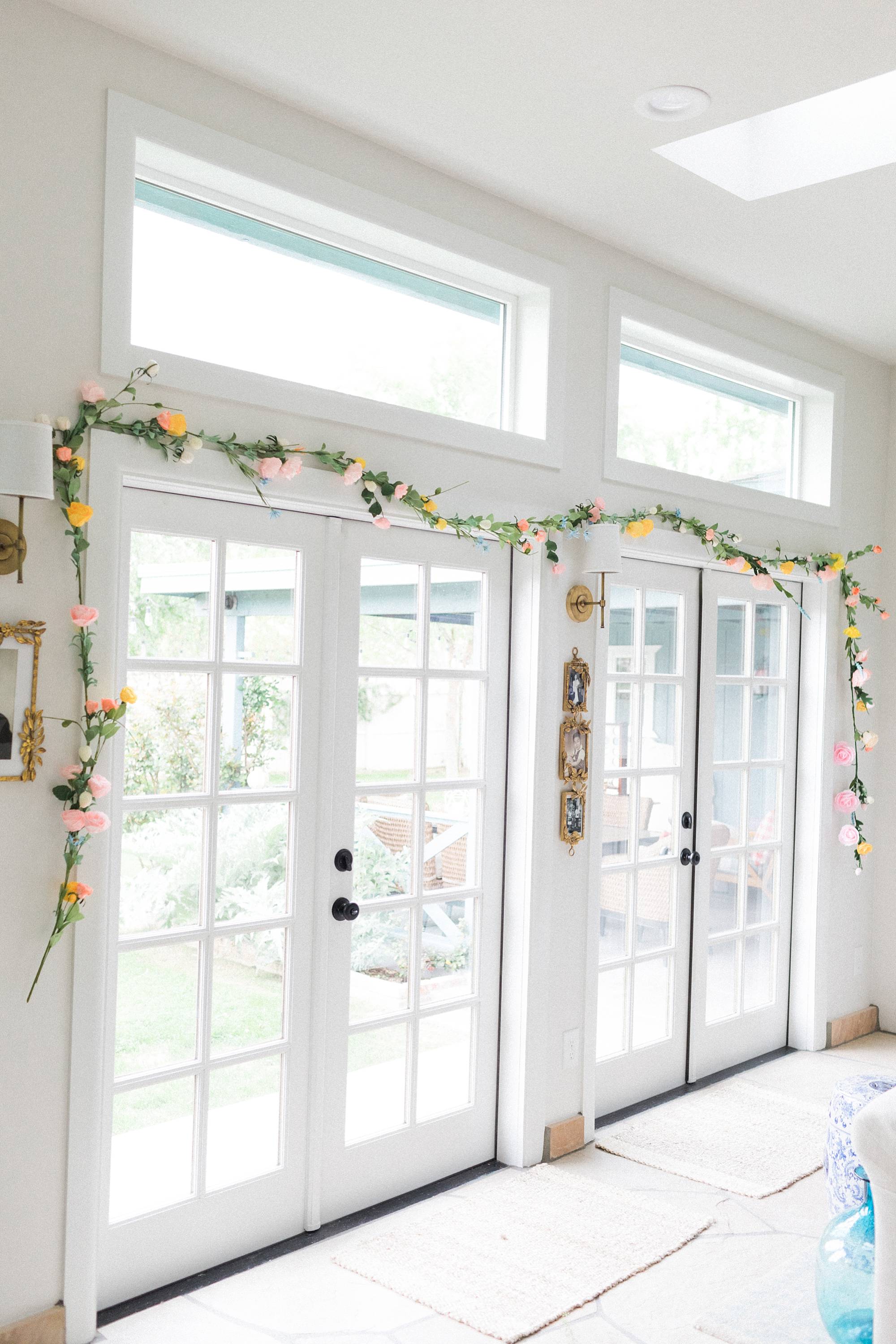 After working on a campaign with the 99 Cent Only Stores last fall, it reignited my love for bargains and also made me rethink the way I spend money. For instance, I was at Target browsing the dollar bin which is hardly a dollar bin as they put in cute objects that are priced at $3 or $5 but then you’re suckered into it because you’re like, meh, what’s $3 for highlighters? OK! I bought just that recently and walked to my car and thought, DOH! I should’ve gone to the 99 Cents store and got highlighters instead.

So with this new mentality I have for certain objects – and party supplies are truly a steal (just wait for my Easter party) every time I went to the 99 I would just pick up some of these rubber foam-like florals. It probably took me about three trips to feel like I got enough to start my project. 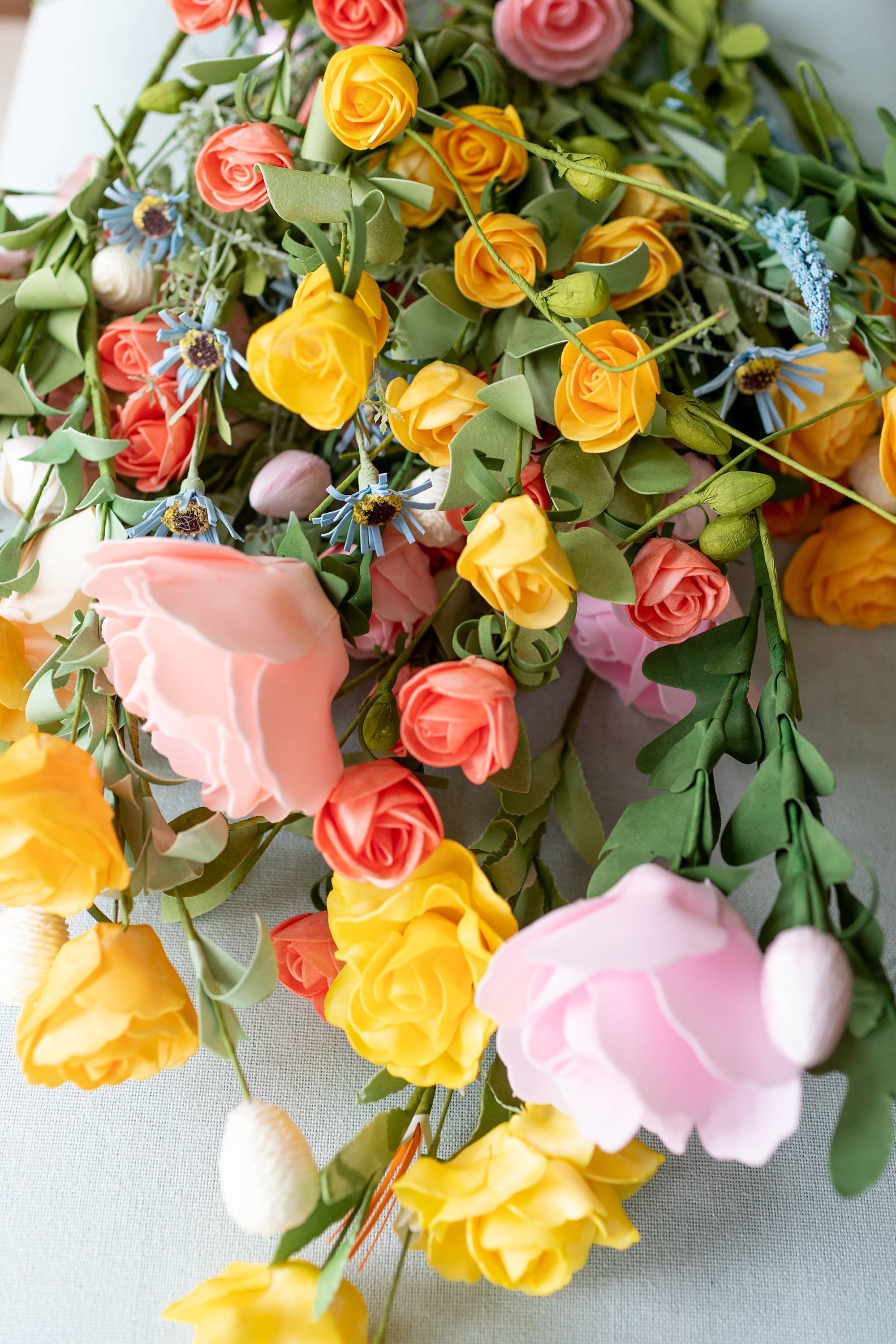 I had so many visions for using these – primarily for Easter and especially after seeing the new Mary Poppins movie. The Up song at the end, that park theme is exactly what I wanted to recreate for Easter (I mean I won’t because I’m not holding a fair but I was truly inspired by it!).

Aren’t the florals beautiful? And not cheesy too fake looking florals, it’s obvious they are fake but in a crafty way. After I shared a glimpse of it and some of you on IG said, Yes, blog about it! Here we are, just for you. 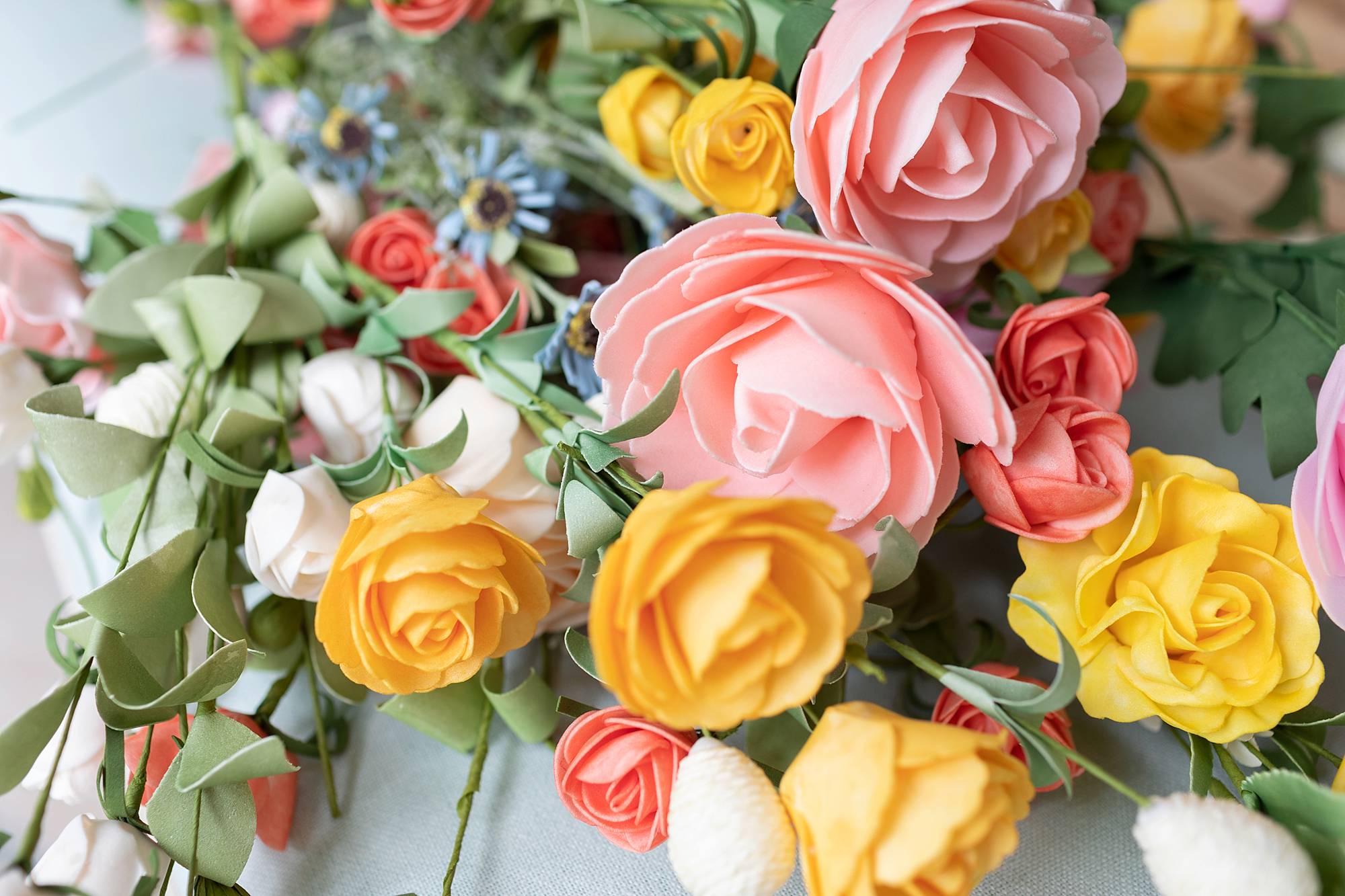 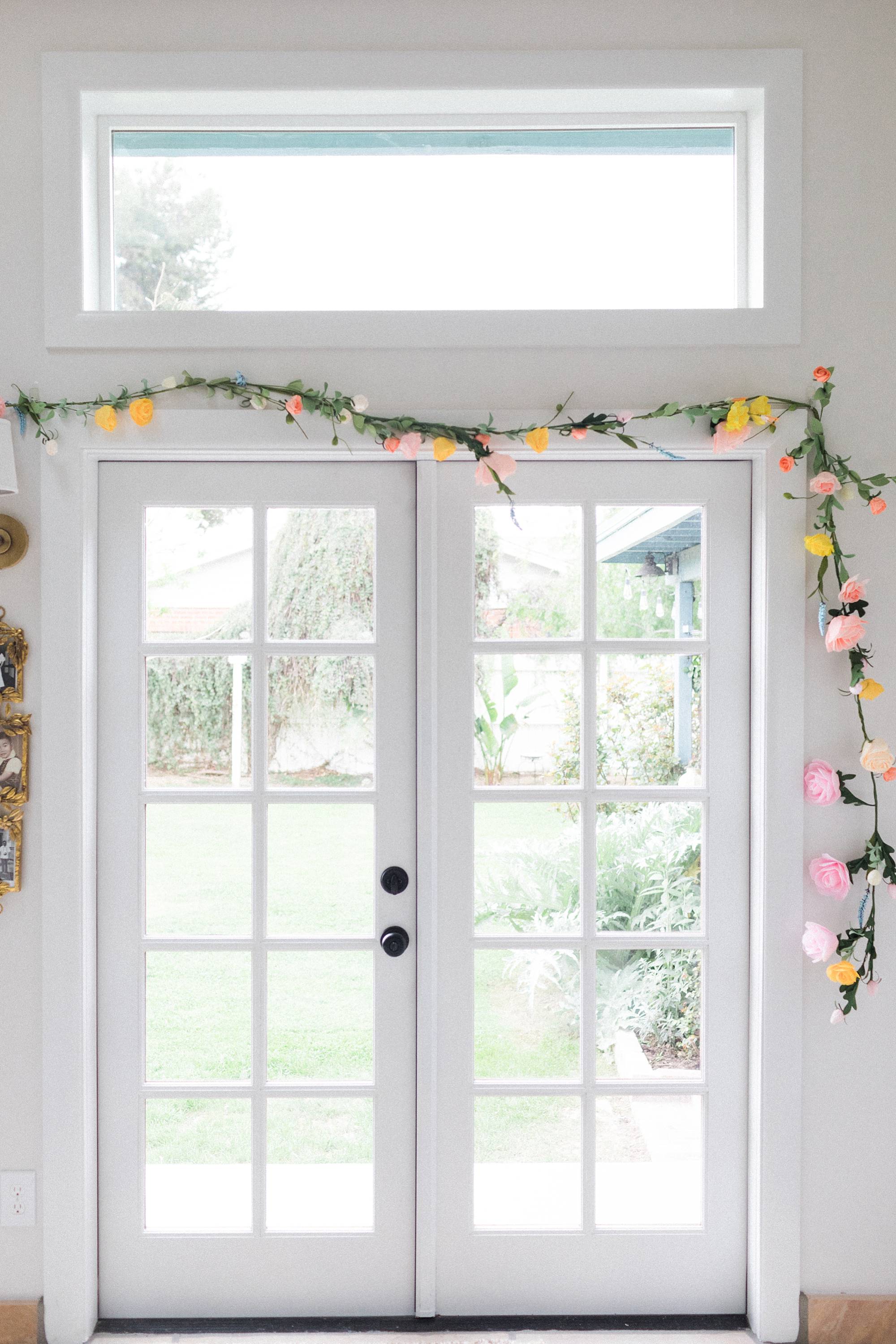 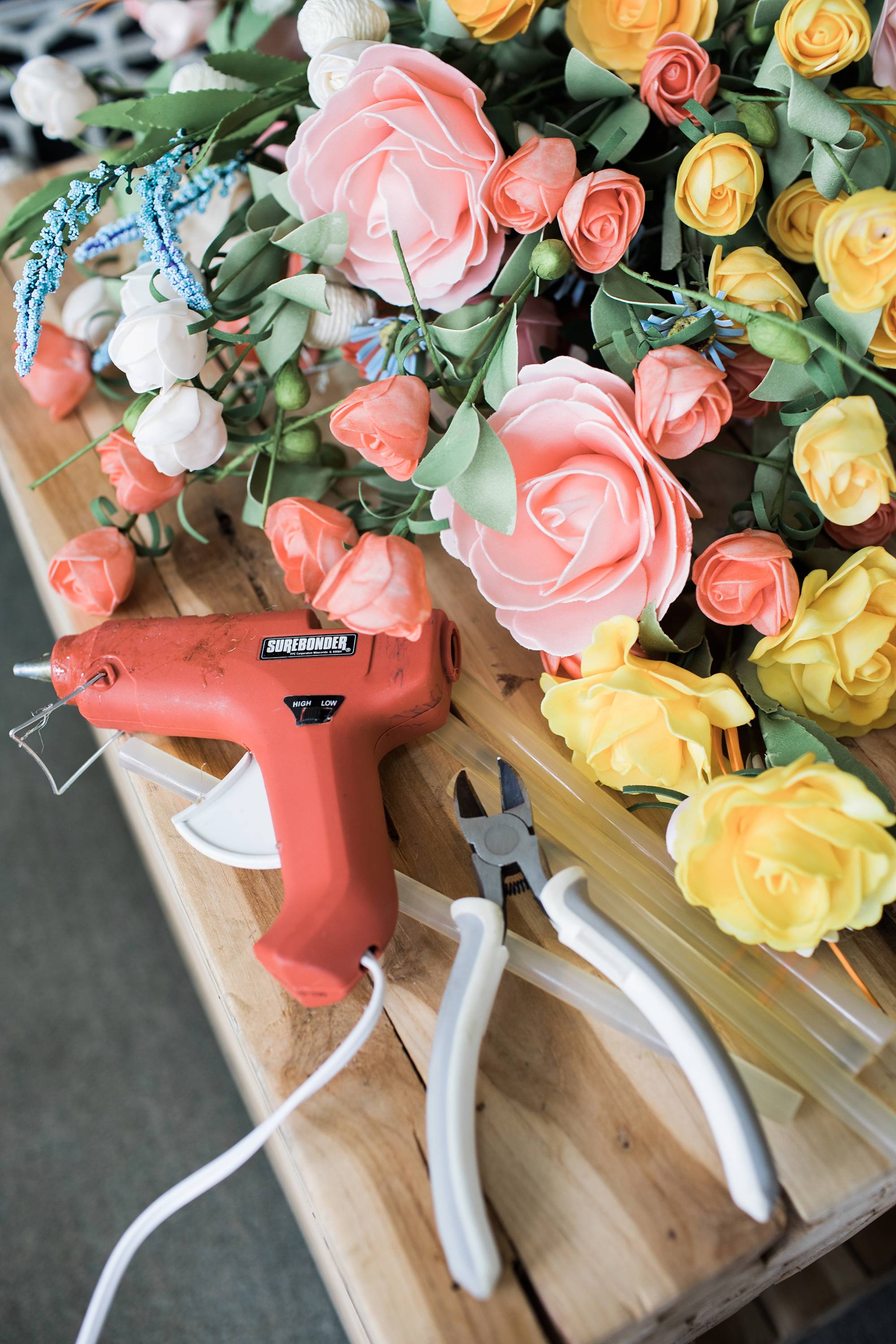 Ok so there are two options you can go down – a super quick option I realized halfway into it which is just don’t do much but just keep glue gunning stems together in an ombre color, or you do what I did and mix them which will take time. 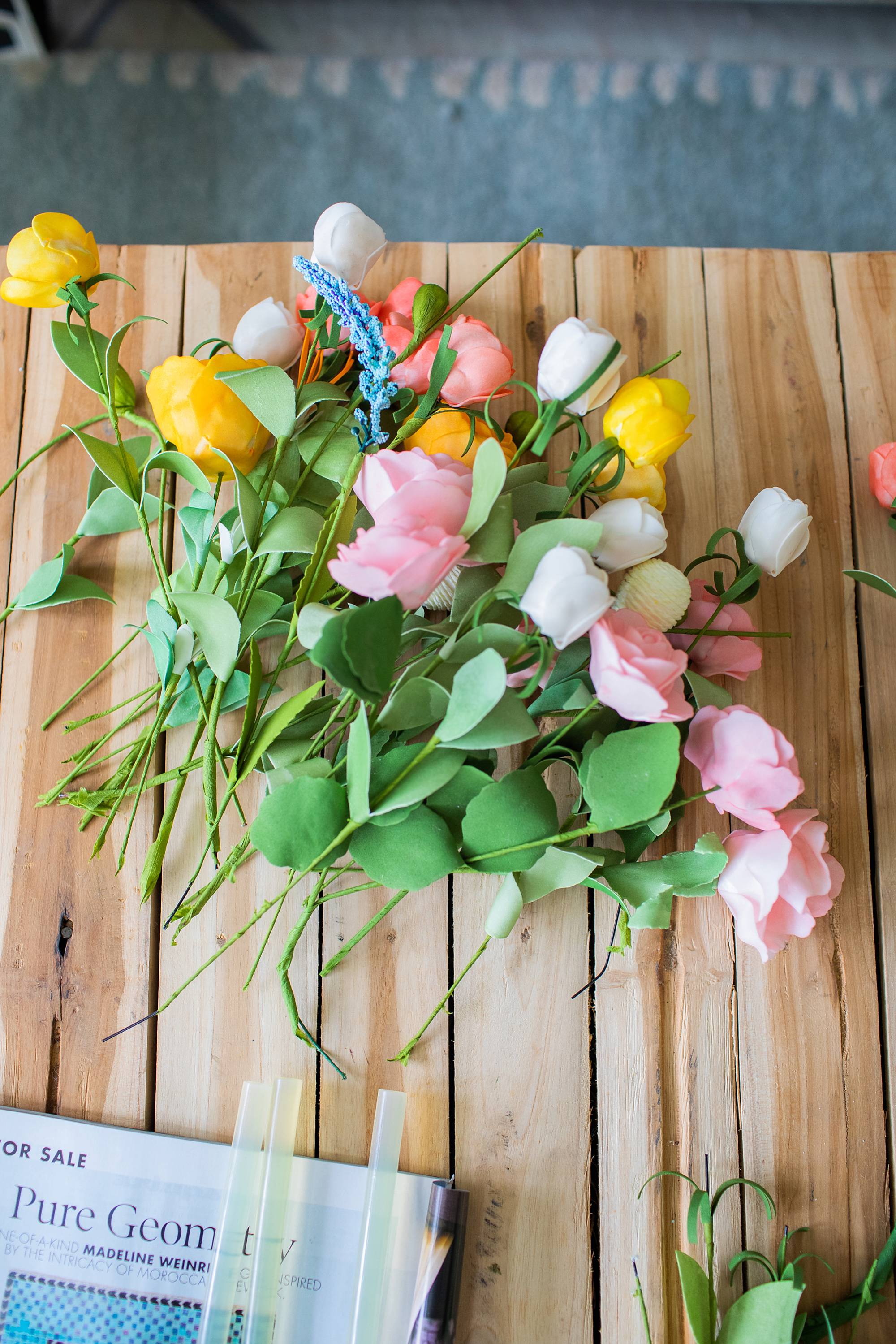 You start to glue gun the thicker stems together in the same direction. Just thick tip to the thickest top tip of the floral so you create a one line.

Then you add in the smaller florals (ones you had yanked out) and glue them along. Take some leaves and hide any flaws if necessary but don’t worry, no one is looking closely especially if you are hanging them up. 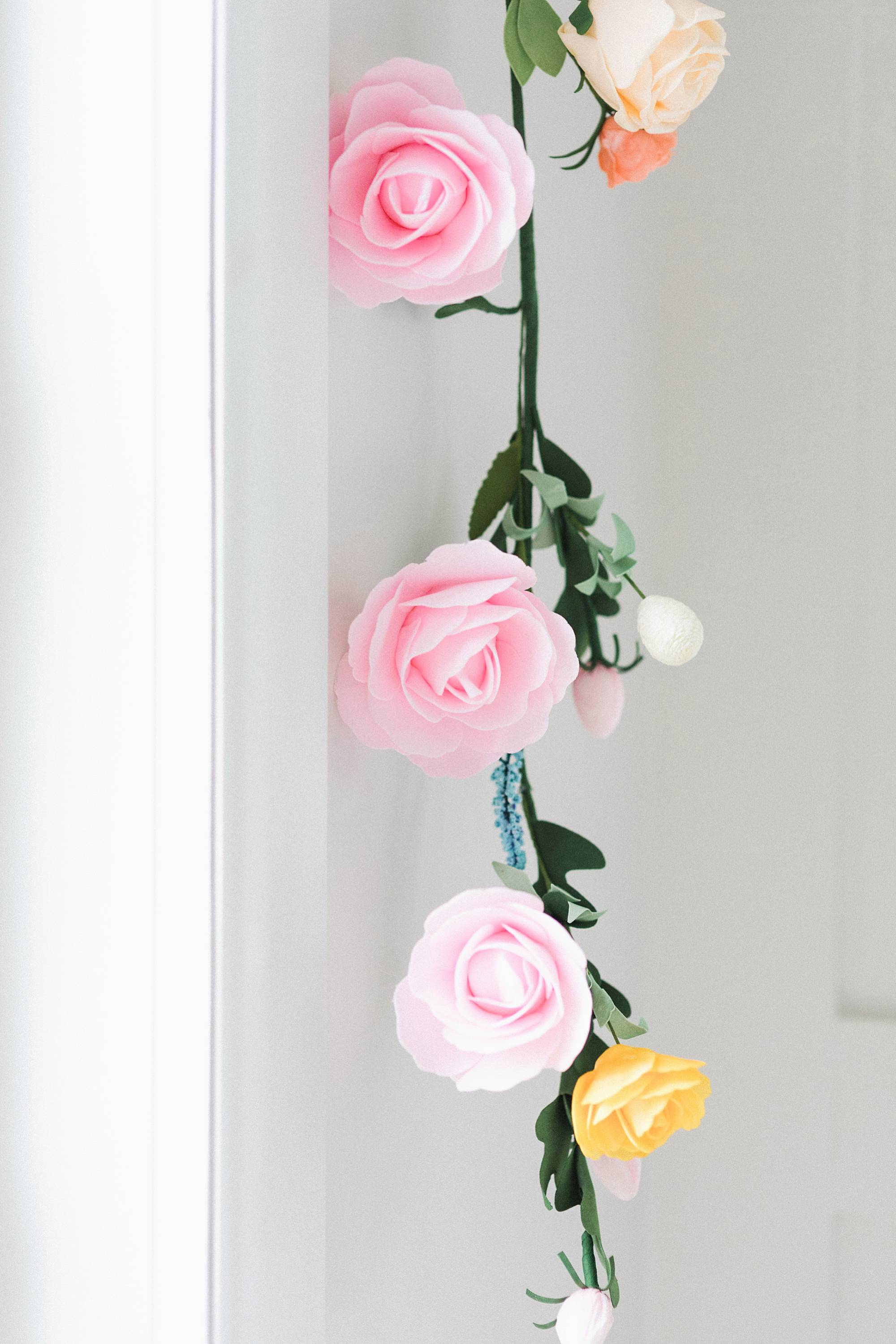 I also hung it not complete over my French doors and had a step stool to fill it in. I had my glue gun on an extension cord so I could reach it. 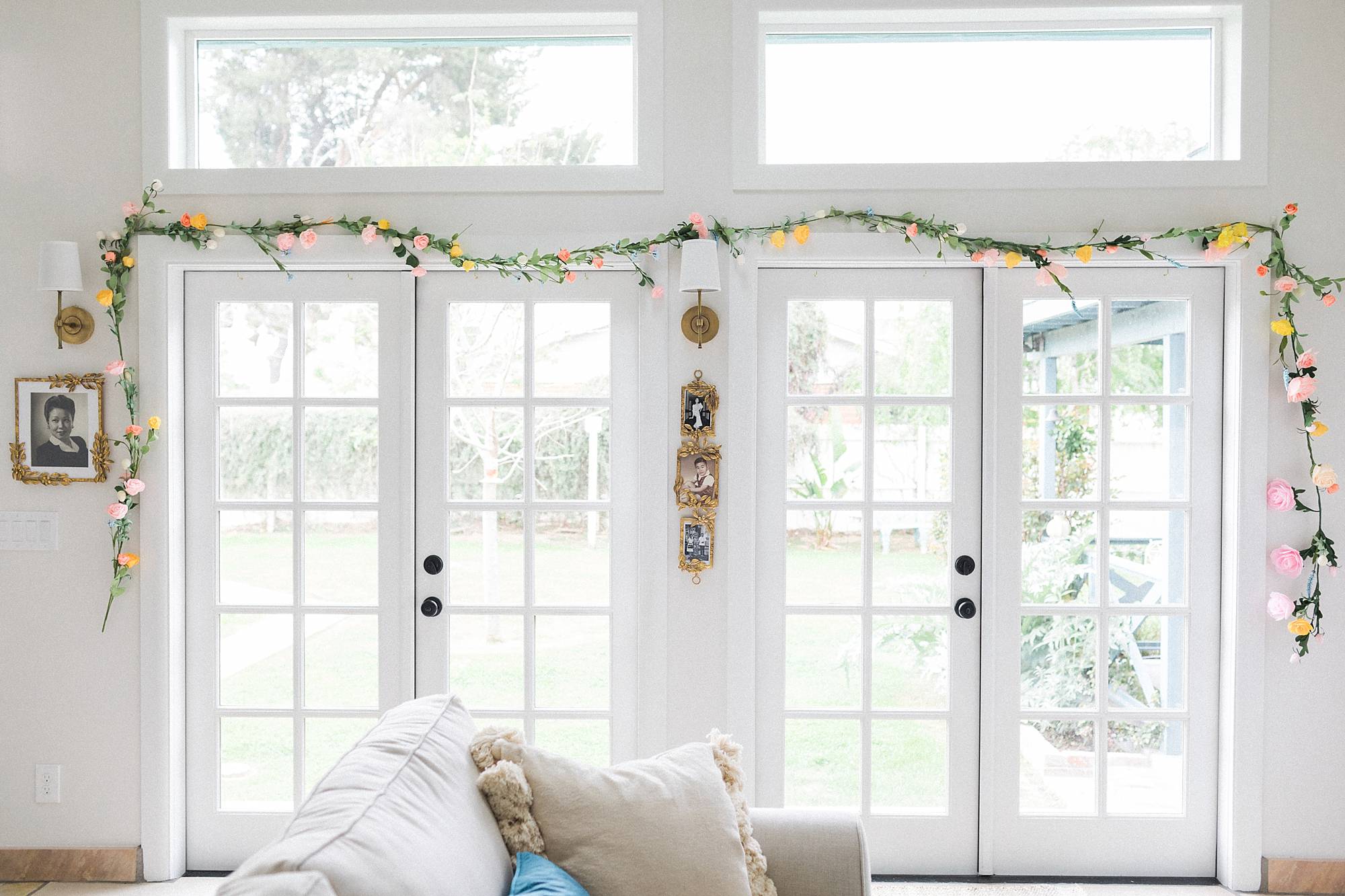 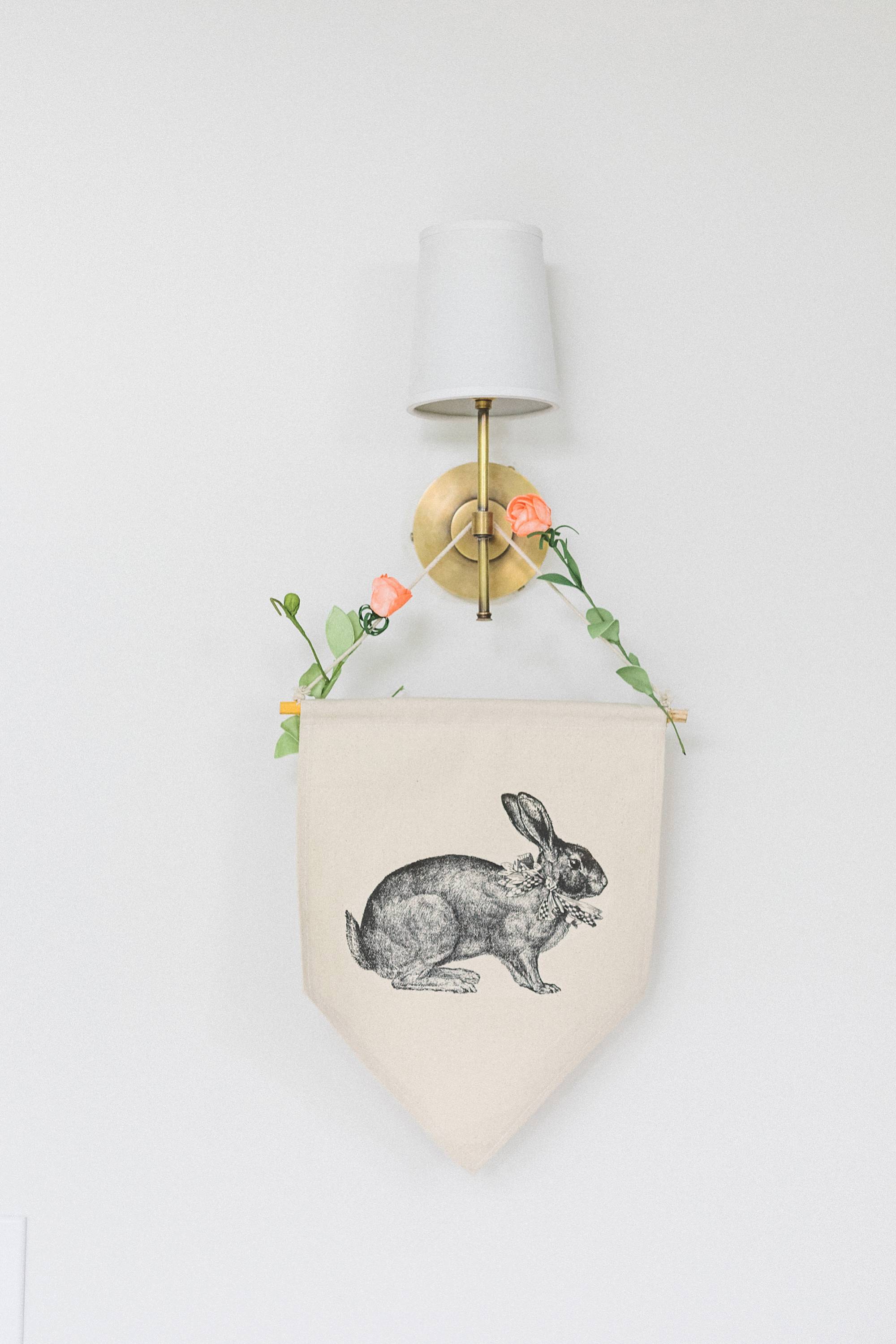 You really can just use these florals for anything, cute touches around the home. And of course if you don’t want to make one, there are some cute ones on sale I spotted at Michael’s here. This one looks pretty close to what I created. 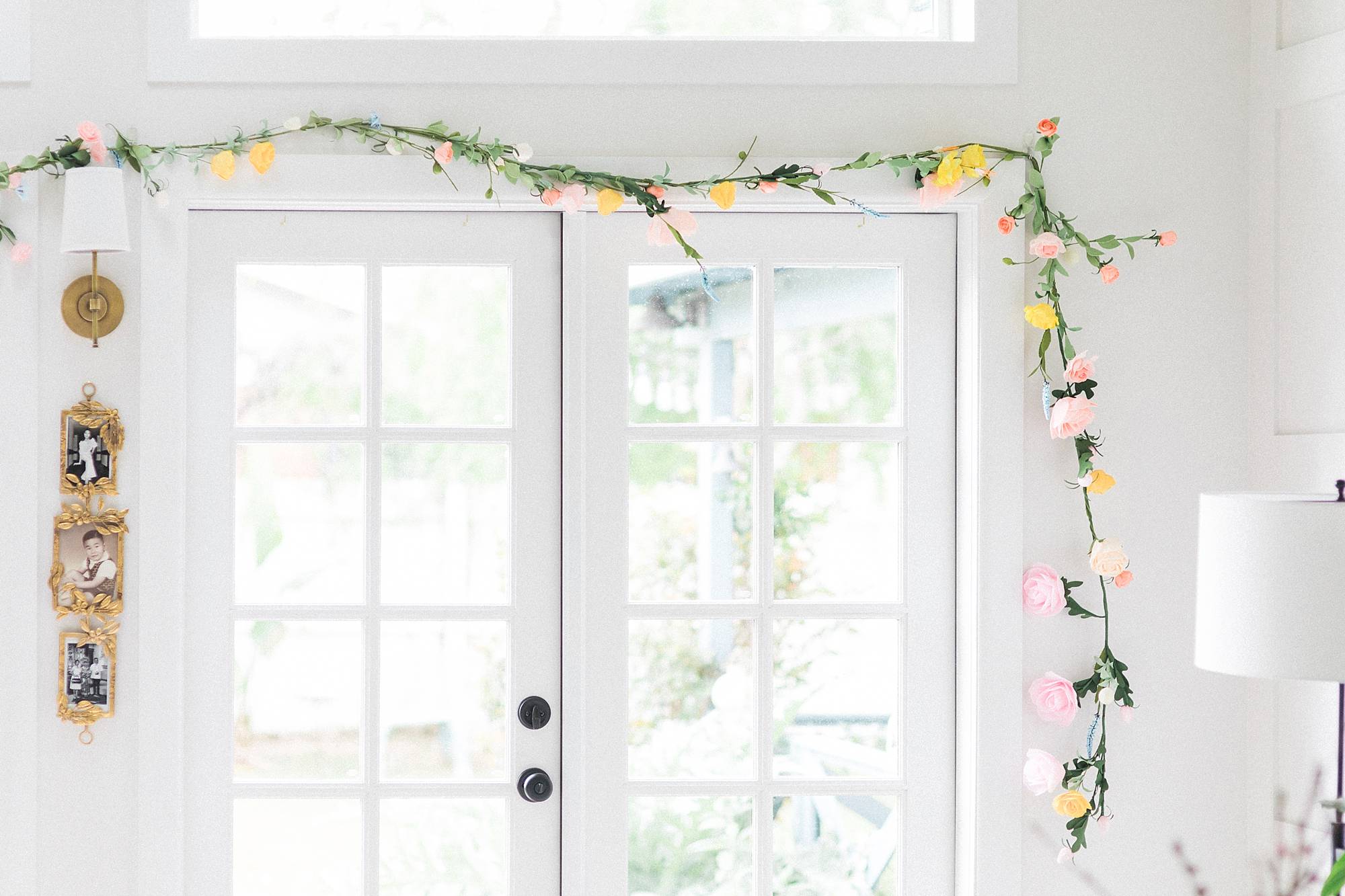 Later that night I also decided to wallpaper the back of the Murphy bed wall. I went a little nuts with my crafting but that’s what I do when Benjamin isn’t home. I get a little bored and super productive – or I can get totally lazy and binge watch shows. It just depends on my mood and to-do list.

For now, the to-do list is on going as we make this space more comfortable for our needs and continue to figure out what we need to make this space fit our lifestyle. It’s not to be rushed but we are getting there!

There are 1 comment on DIY Floral Garland for Spring.

Do you have silhouettes? Here's a closer look at o

I have had two telemedicine visits in the past yea

#ad Our (forever) home was the second home I purch