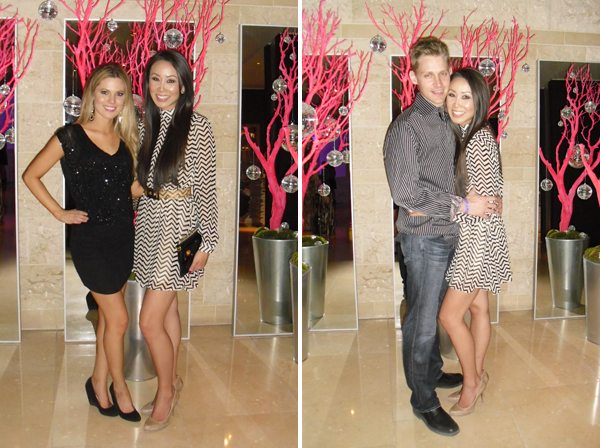 Last week FORD/RBA had their 25th Anniversary celebration at the W Hotel in Scottsdale and all talent and clients were invited.  Thanks to Lizzy Marsh for doing my makeup for the night!  It was the latest Mr. Wonderful and I have stayed out in like, forever.  Actually, probably the first that we’ve ever stayed out late, ever.  We had a blast because some of my bests are signed with FORD as well – I’m on the print and acting board, and their husbands/boyfriends attended which made Mr. Wonderful very happy.  I was also happy to see my fellow colleagues who I work with in the past, known for many years, and new ones that I have recently photographed as well.

So here’s my background of being a model and actress and probably the only time I’ll ever reference it for a while.  As a teen, like most girls, I wanted to model.  I went to model searches (which I do not recommend) and “modeling schools” (which I also do not recommend), but my mom who was a professional model and singer overseas was convinced I shouldn’t have to pay to be a model.  So, then went to college to move on with life.

In college during my sophomore year, I signed with a SAG/AFTRA licensed agency (that’s an agency that is union licensed) in Phoenix, while I attended The University of Arizona in Tucson.  I had no experience whatsoever other than a few test shots (that means free) by a San Francisco photographer.  I remember getting the call for the meeting when my future agent said, “I’m not signing you because of this (as she showed my pathetic resume of experience), I’m signing you because of this (as she pointed at my photos).”  And she took a chance on me and as a college student, I worked quite a bit between classes.  I took no acting classes at the time but learned as I auditioned and did improv which was super scary at first, but then you just don’t care and just act to get the job.

Then I moved to LA with my college degree to work in the television industry and before I got my job at E! as a reporter (see I did use my journalism degree), I tried to find an agency to represent me. I figured being 5’8″ and full Chinese it’d be easy.  That wasn’t the case since LA is saturated with 10,000 people who look like you. “I have another girl who looks just like you,” was my constant response as I got shut down over and over again.  Then finally, it took one agency to come back and say, “I have another Asian girl, but you look nothing like her,” and I was signed.  I still traveled back to Phoenix with my other agency for jobs (you can have more than one agency represent you in different states.  In California however, you can have many agencies represent you but from different counties).

Then after 10 years with the agency who represented me since I was 20, I decided to move to another agency just for business reasons – I wanted to do more print work in addition to my acting and join my friends Rachelle and Brenna (in the photos above) who were at FORD/RBA.  I already had so many friends at this agency and working with them as I photographed them for PHOENIX magazine has been so wonderful.  I am honestly part of a family that I love.

Speaking of modeling and acting, I have two jobs coming up, one involves an infomercial and a classic cars calendar – always tasteful, come on.

So with all of this said, guess the modeling experience that I have and having friends in the industry has most definitely helped me when it comes to photographing my clients.  The poses, the expressions, it took practice and I’m still learning as I go, but it’s definitely been advantageous!  I’ll write another blog post about how to get into modeling for those who are interested later this month.  xx

Diana Elizabeth was worried some one else would show up in her chevron print dress.  Funny, she had also said she’d never wear chevron.  Many things that she said she would never do, she has done.  Never say never.

There are 2 comments on ‎’Cause I’m a model, ya know what I mean.