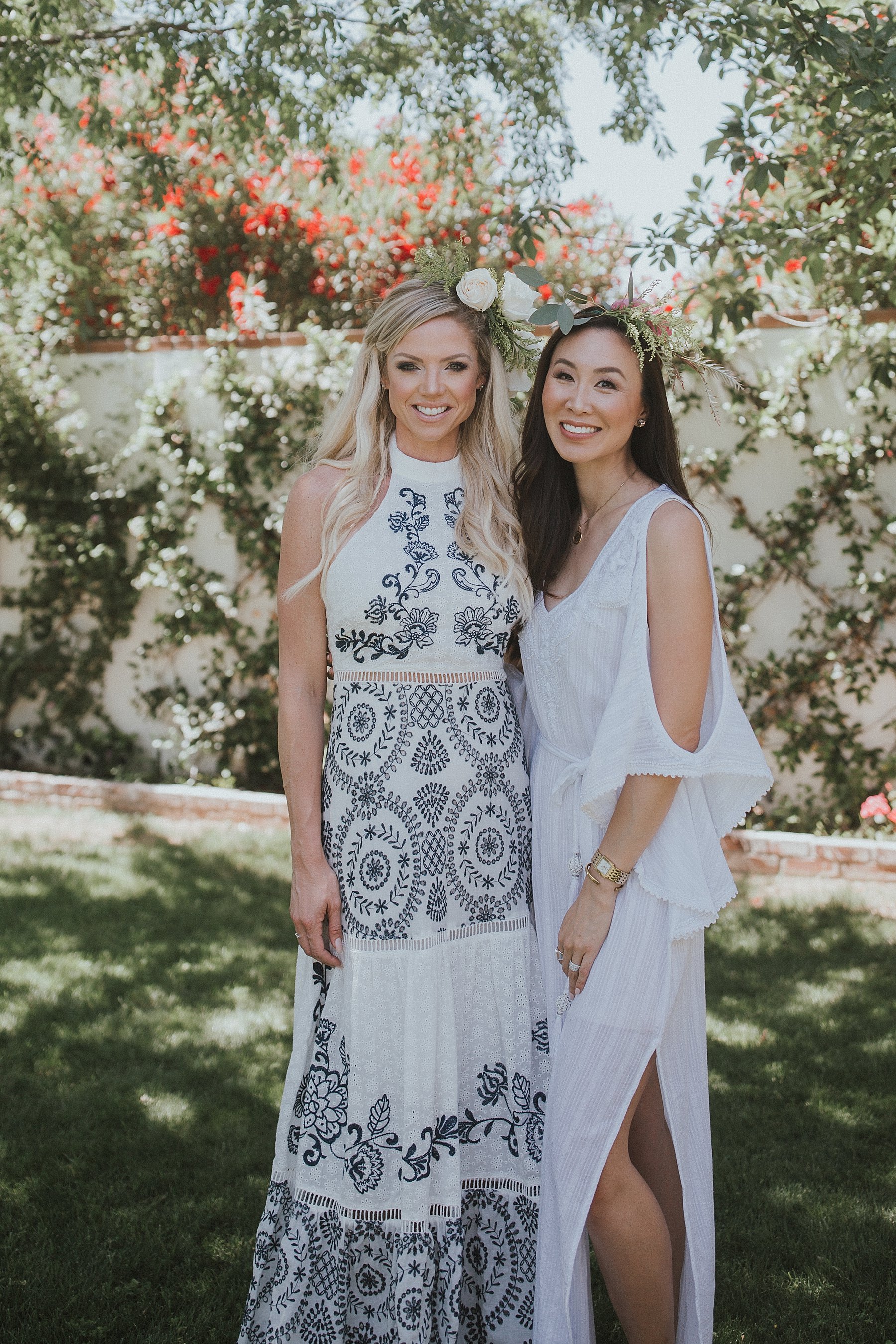 Today I’m sharing some moments from Melayne’s boho bridal shower I co-hosted with Melayne’s niece who is like a sister to her. These images were captured by her longtime family friend Susie Marie who will also be her wedding photographer! I took Melayne and Drew’s engagement session in the desert you can see here. A long time ago, we’re talking years ago before Melayne ever met Drew, I told Melayne I couldn’t photograph her wedding because I just wanted to enjoy it *wink* Some weddings as a friend you just want to be a guest because it’s so important you are there to enjoy it with your friends. Anyway, last weekend I was happy to host her shower and I’m super excited to enjoy the wedding day with our best friends this fall.

It was nice to focus on hosting and not think about about taking photos so thanks so much Susie for sharing these and taking some pics while you were also a guest! I wanted to share this shower because it was a cute boho theme with a DIY flower crown bar and also wanted to give an idea of what to feed a group of 25 for brunch, especially went bride has a gluten allergy. Melayne found out she had a gluten allergy after taking the 23andMe DNA test!

Though Melayne’s niece Savannah and I were the main visionaries with budgeting and co-hosting, we also had help from Melayne’s family, her mama and sister and our friends bringing things for set up. It was a team effort! 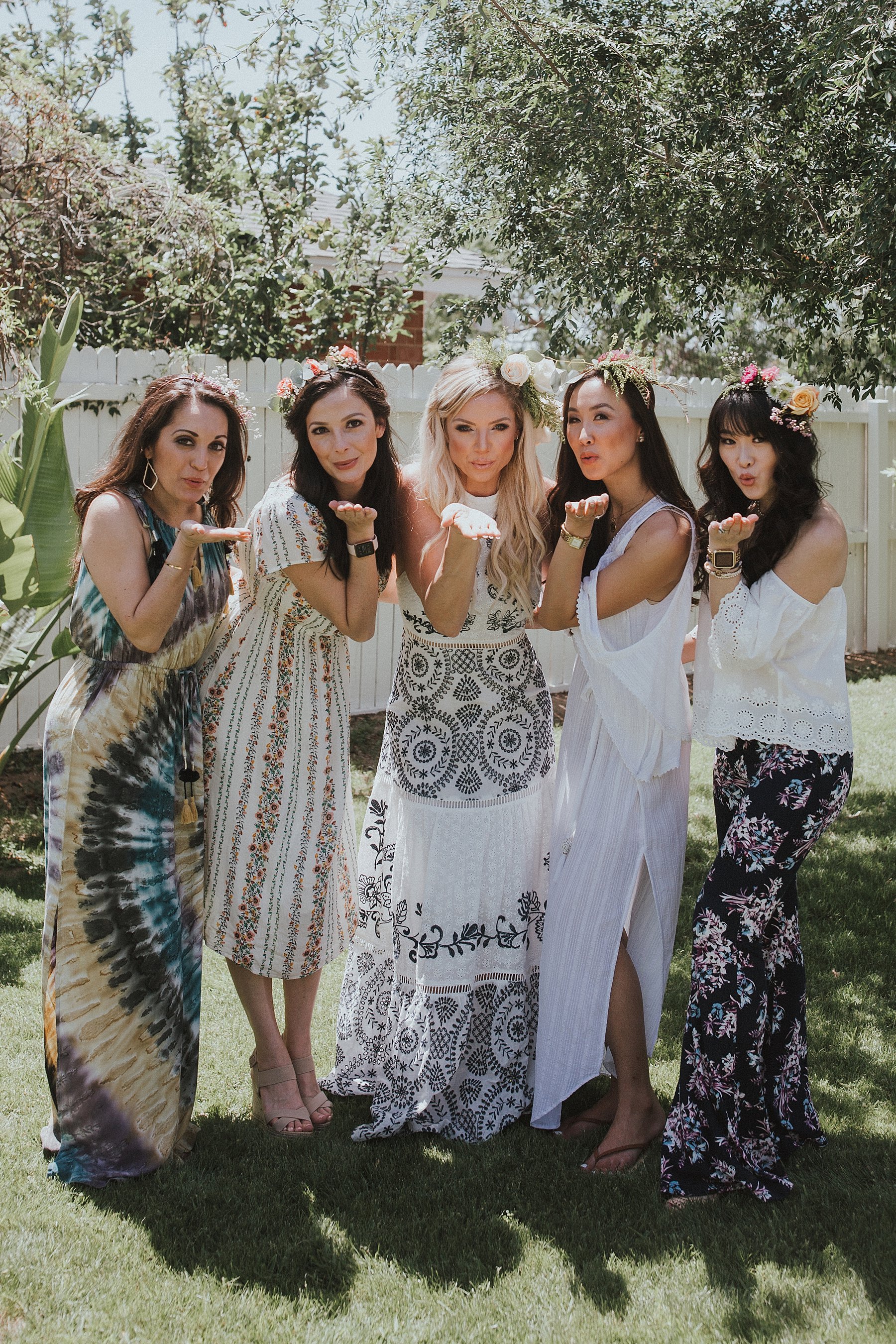 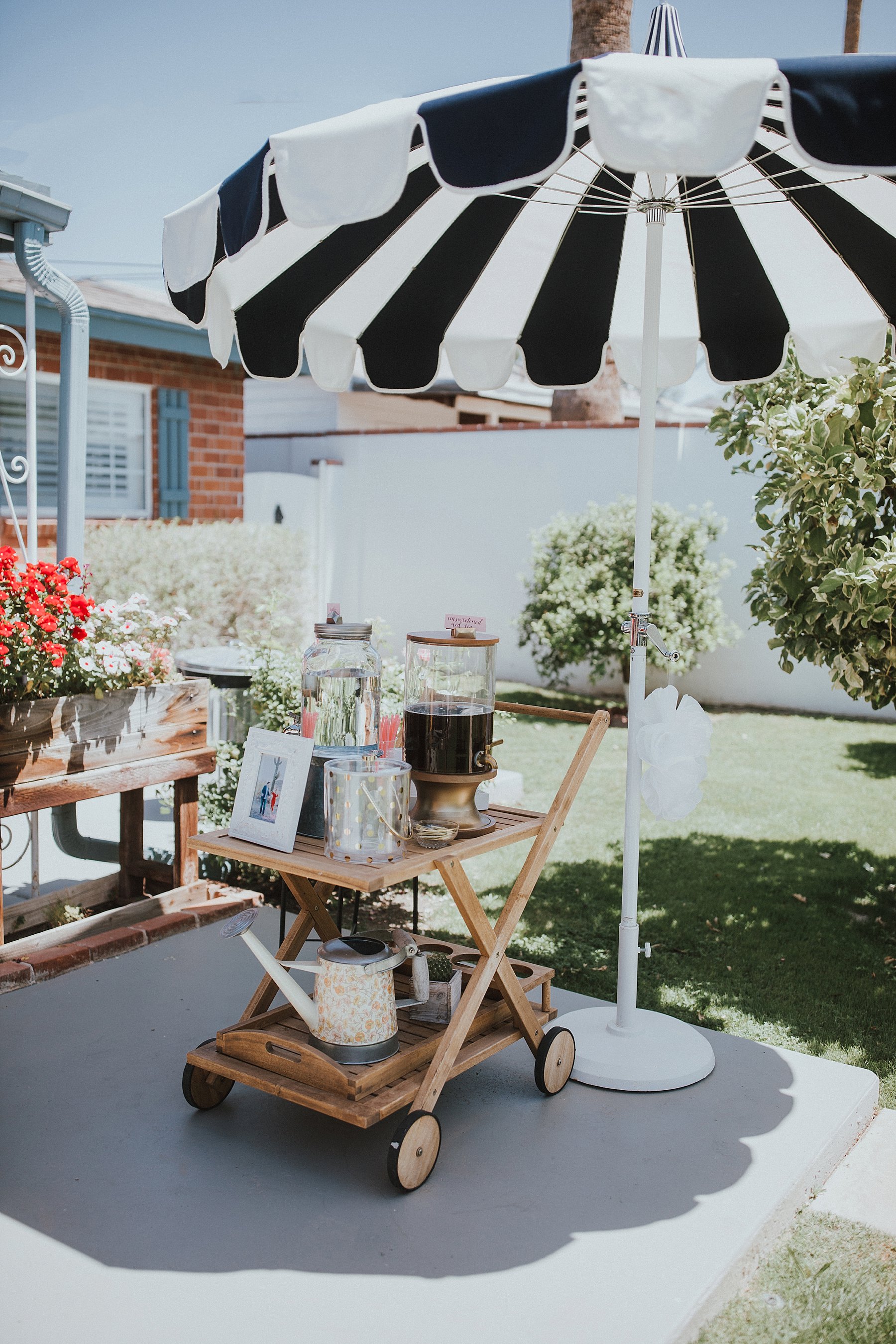 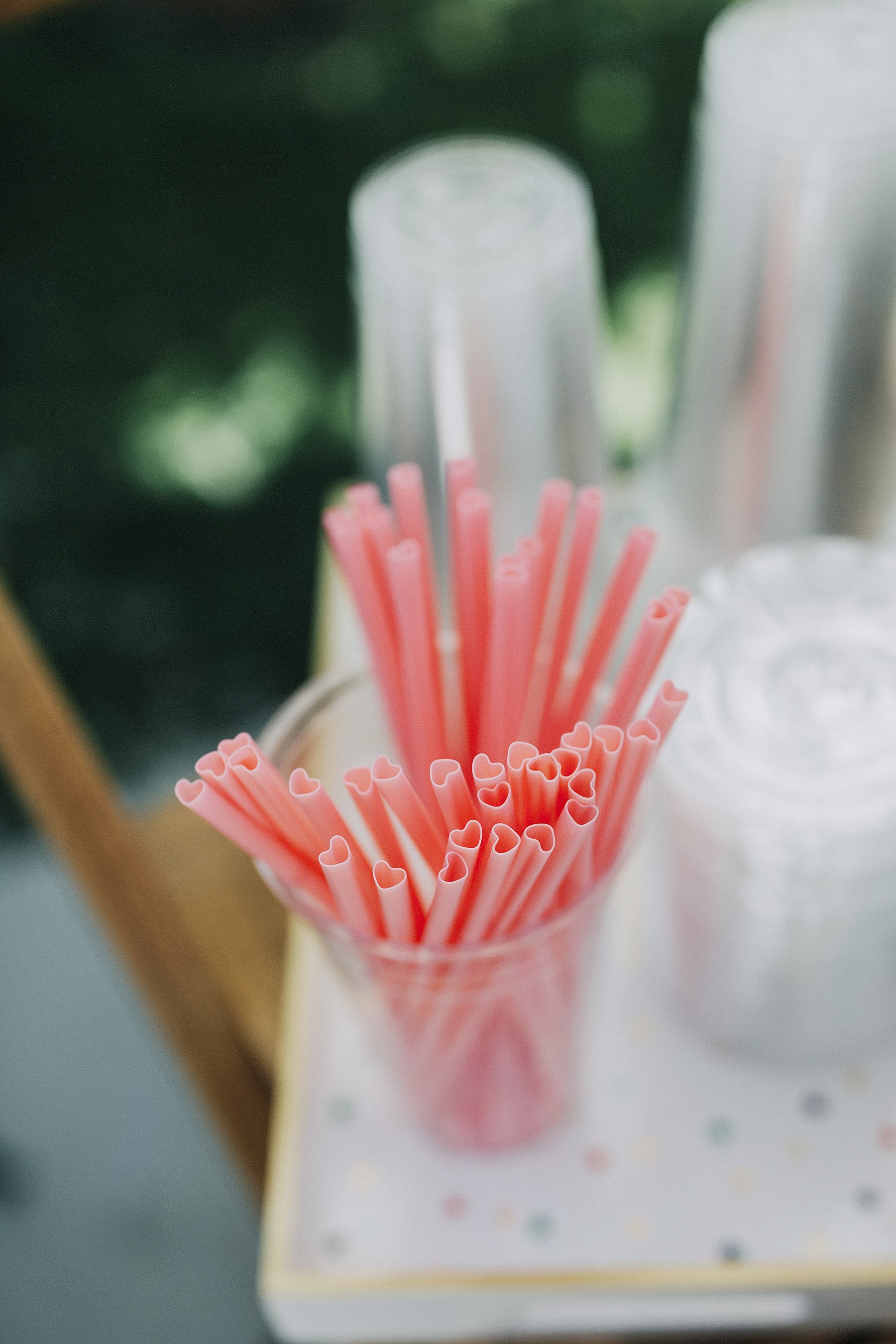 The items with an asterisk* were the things we actually made from scratch, like recipe. I can’t count fruit salad because well, you just cut it up!

While everything was store bought aside from the gluten-free cookies made by Savannah and the tater tot frittatas which I made from a recipe I found on Pinterest, I had to add some sweets like donut holes and coffee cake. I’m addicted to raspberry coffee cake.

The heart shaped plastic straws were a hit, so many compliments and from Amazon (links below)! I use them daily when I make myself coffee – I believe in having cute things for every day use – not just special occasions, everything you need in life, just get the cuter version haha! 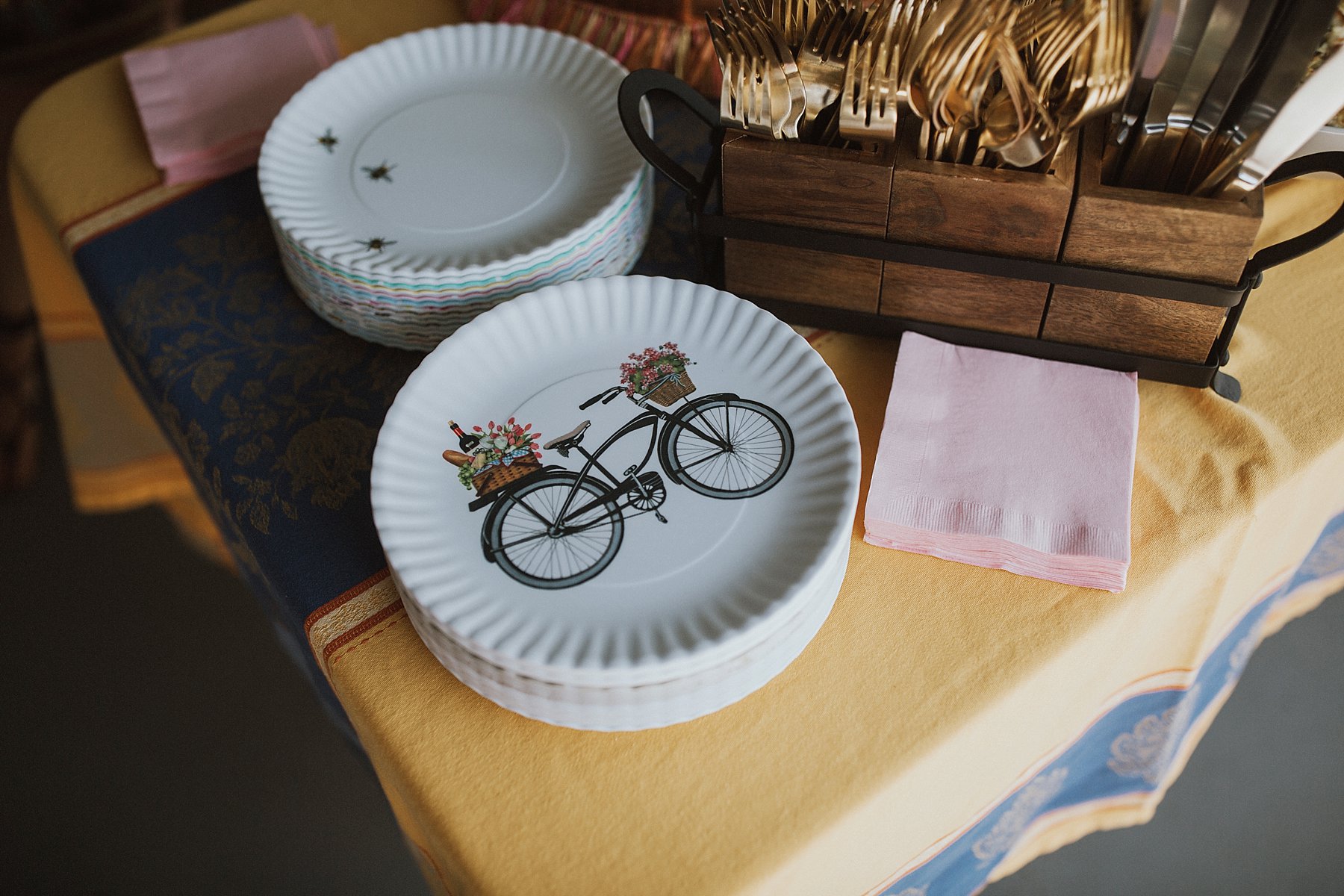 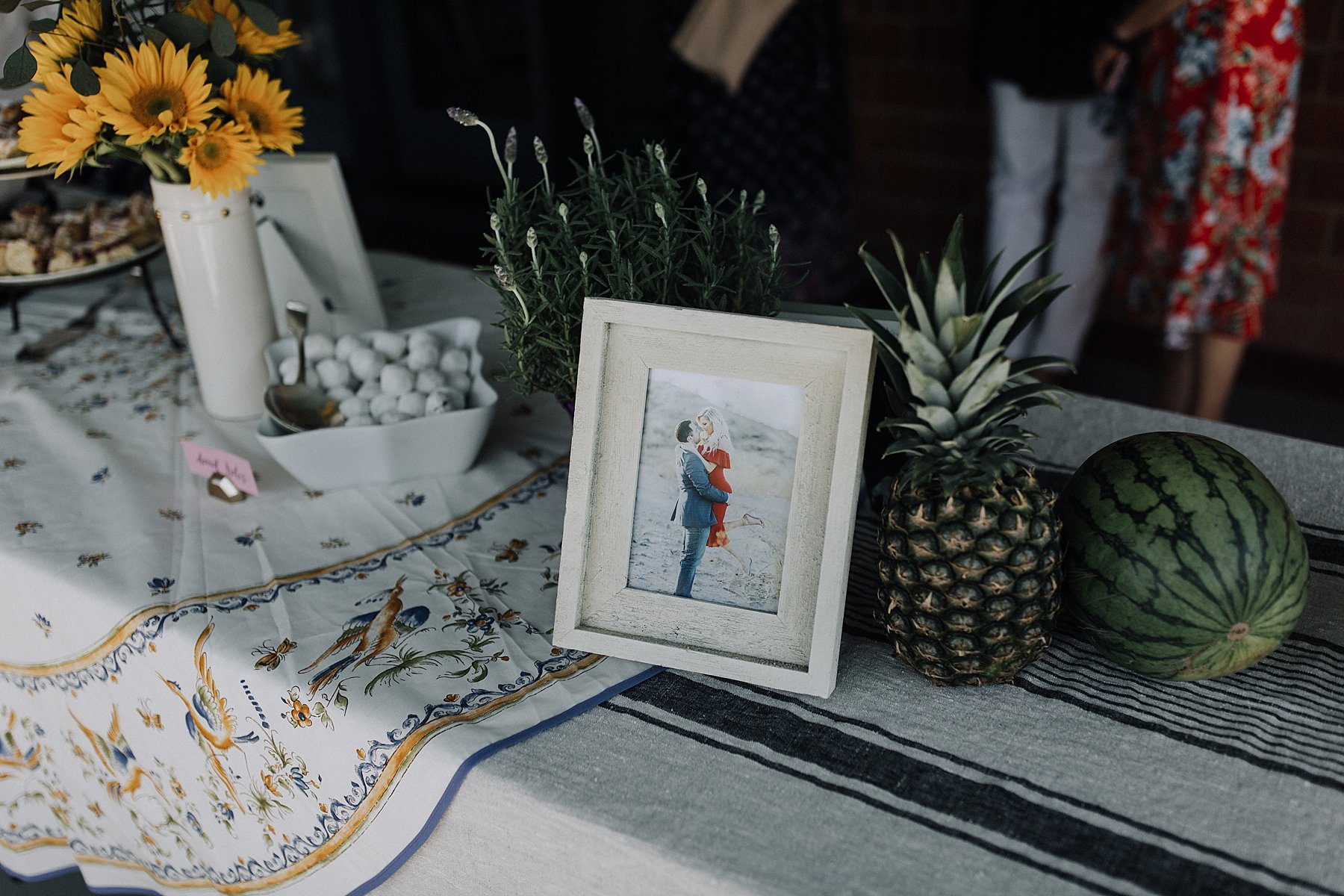 Not everything was GF on the menu, but most of it. I also got a lot of compliments on my melamine plates. Some are from Horchow (same), others were gifted (I often trade house decor with my girlfriend Jennifer) and I also ordered more off Amazon (bikes, bees and more bees, pastel dots and Paris flea market) so I have a mixture of 24 melamine plates! I love them for outdoor parties and not worrying about them breaking.

They are also quite small, just 9″ which helps with portion control if you don’t want people to over eat and you just want to have them sample a lot of different dishes. Like for Thanksgiving I wouldn’t use these!

I layered linens on the half folding tables that Brenna brought over, they were so needed for lots of food and a big party like this!. 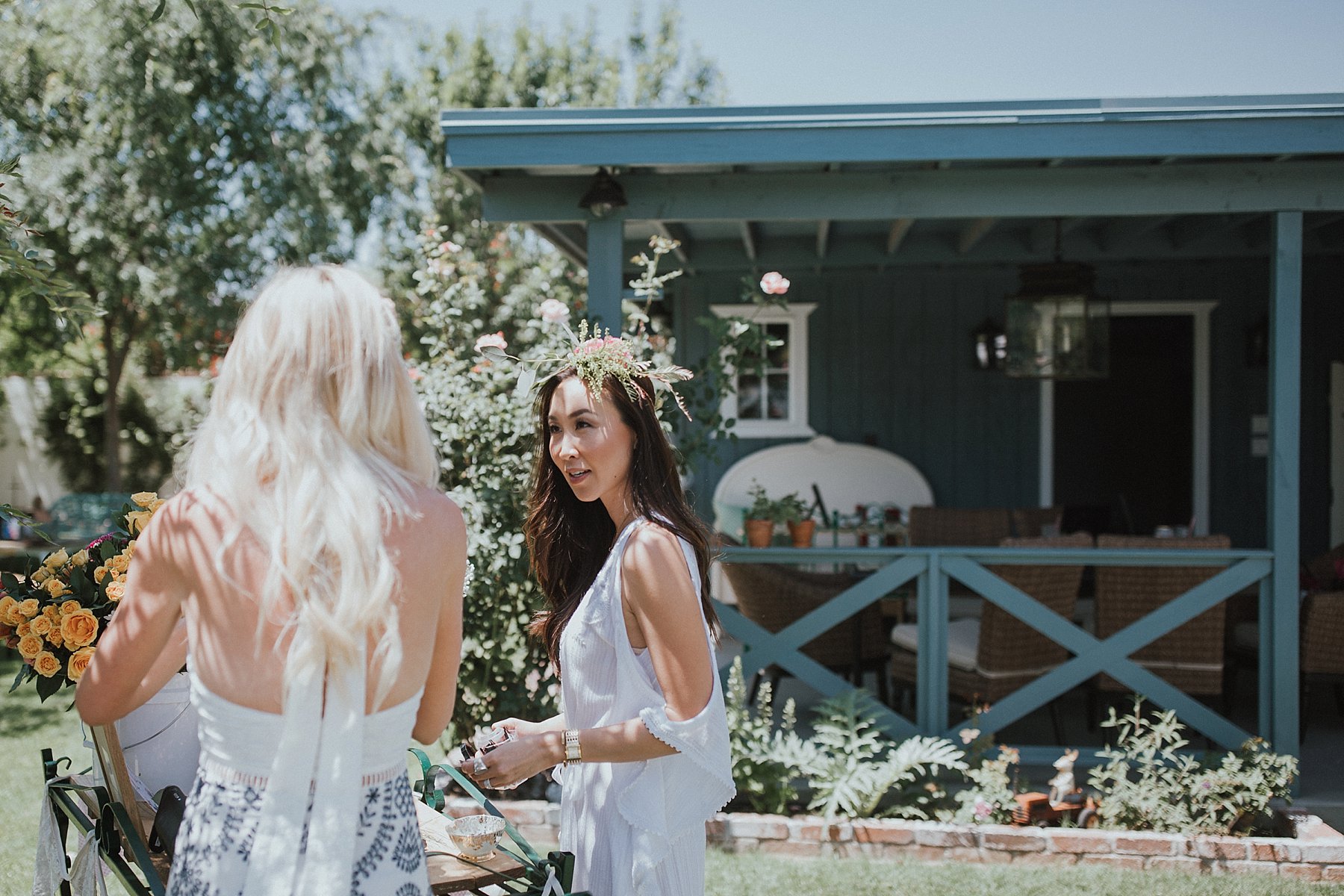 A DIY flower crown bar was an idea I had, since it was a boho bridal shower you know you had to have some fresh flower crowns! I went to Trader Joe’s at 8 am on Friday morning, the day before the shower and took my two white paint buckets from The Home Depot in with me. I should’ve gotten bigger pails but it’s OK!

The flower crown bar was a huge hit and every person made one! I also have to thank Fiskars for sending over some new scissors for the occasion. 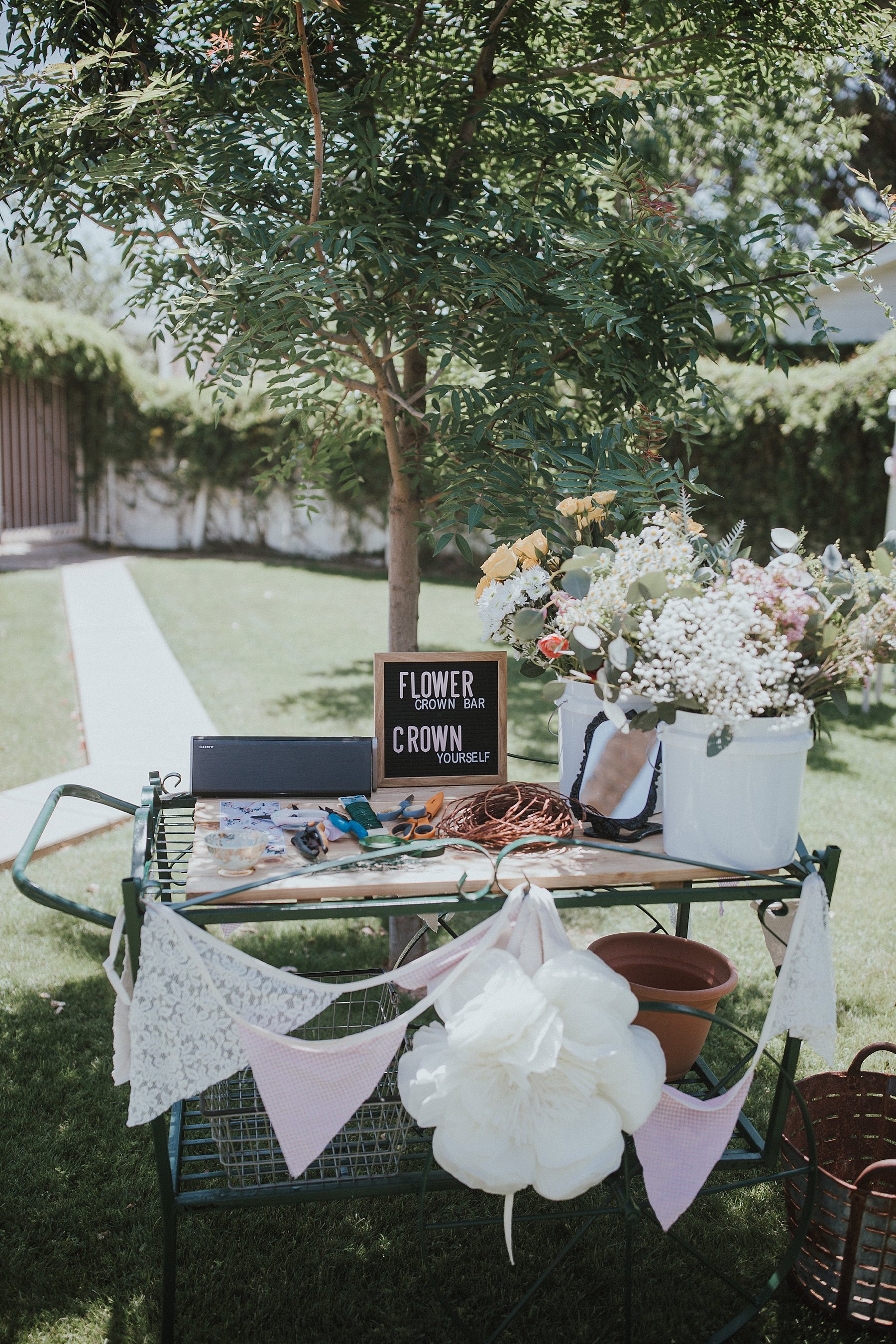 For 25 women I bought about 7 dozen roses and a ton of fillers, like at least 10 variety of greenery, eucalyptus, baby’s breath, I just figured you could never have too much! 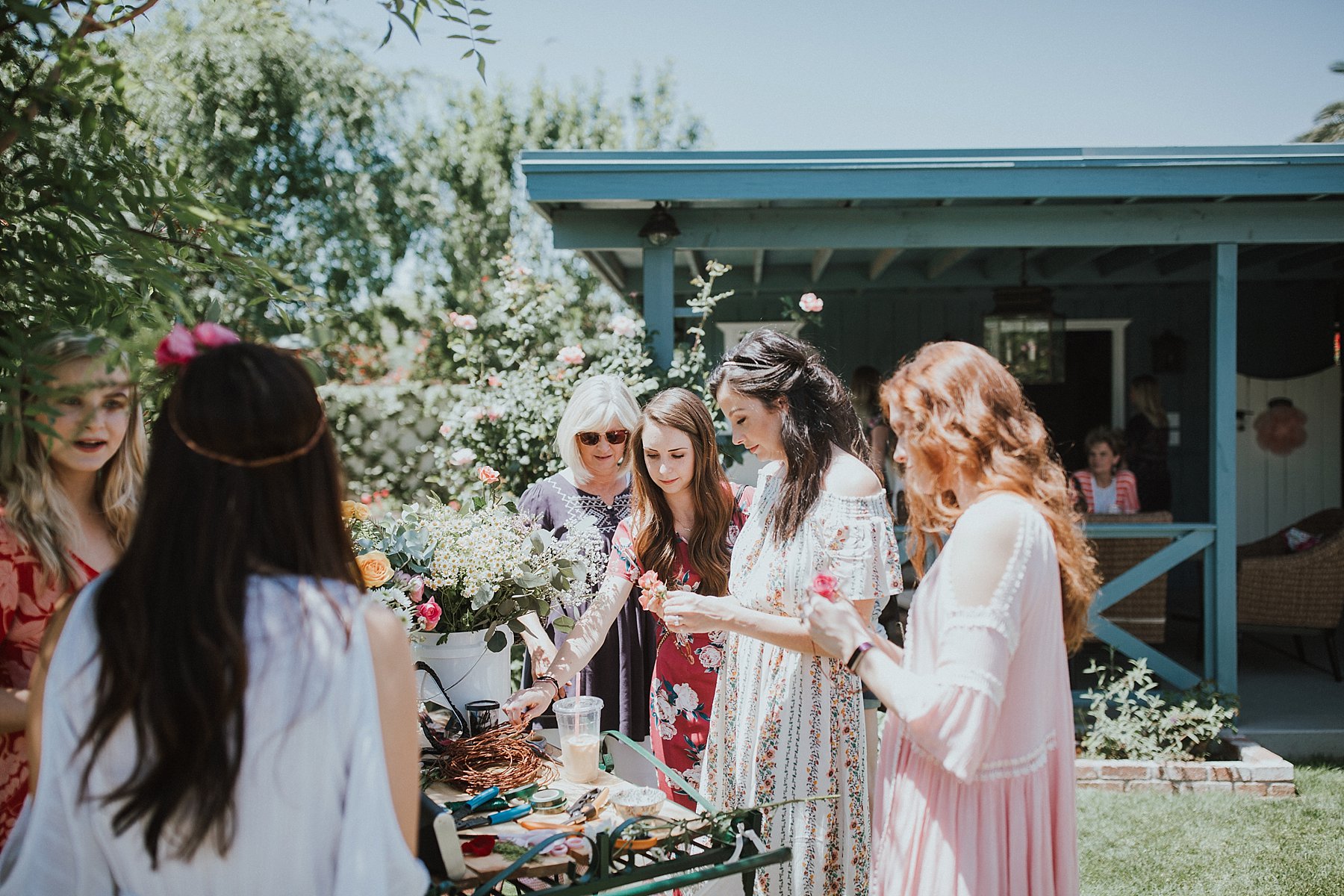 I played some music and put the florals on the flower cart (just realized the irony!) and let the girls take turns making their floral crowns. Make sure there’s enough water in the buckets because lots of flowers suck the water out so quickly especially if you get them the day before, and if it’s a hot day which was our case. A wee bit warm at 95.

If I were do do it again I’d have a bigger and longer because we had so many guests.

I also printed off photo directions I found Pinterest (here). as a visual and left it on the table. 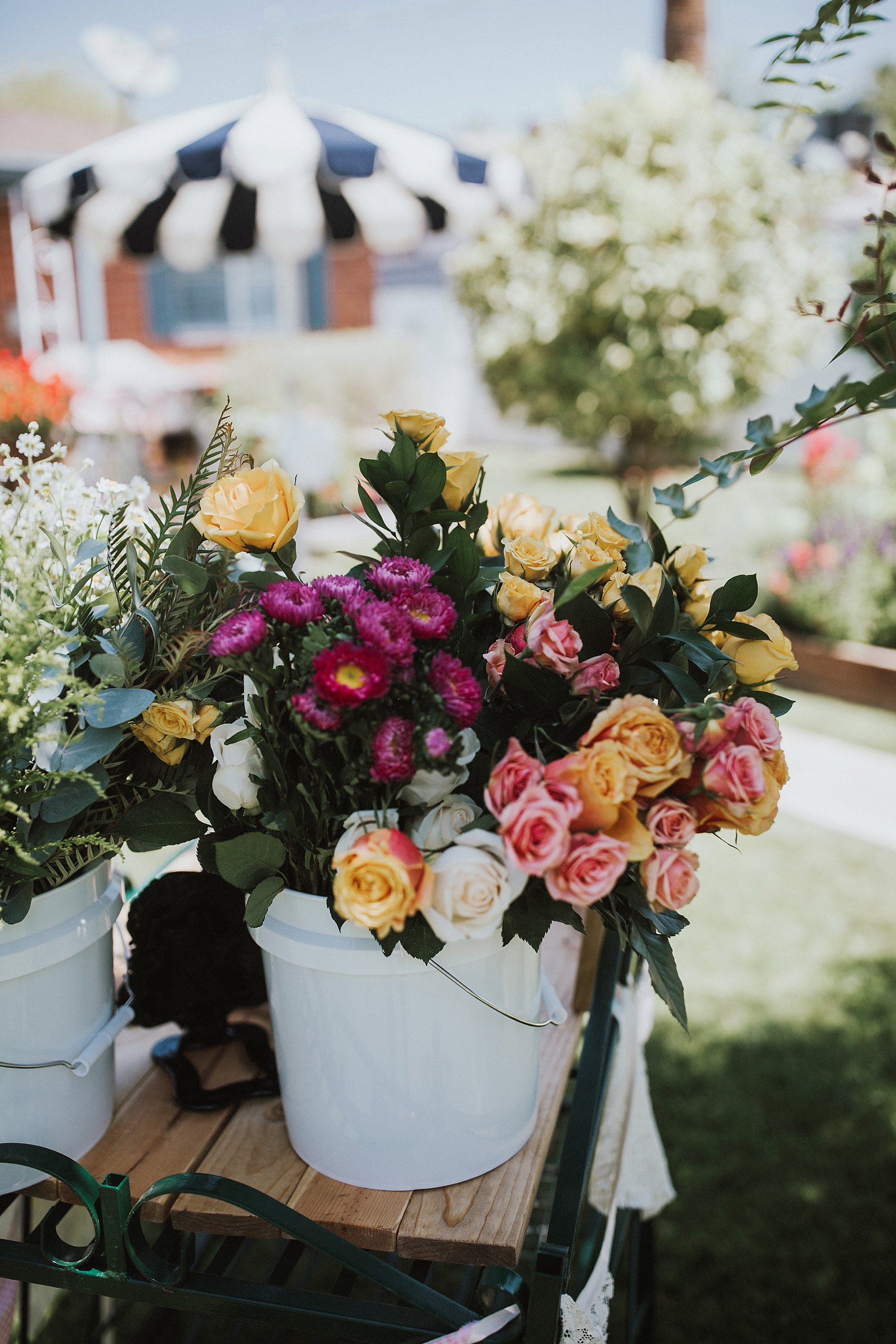 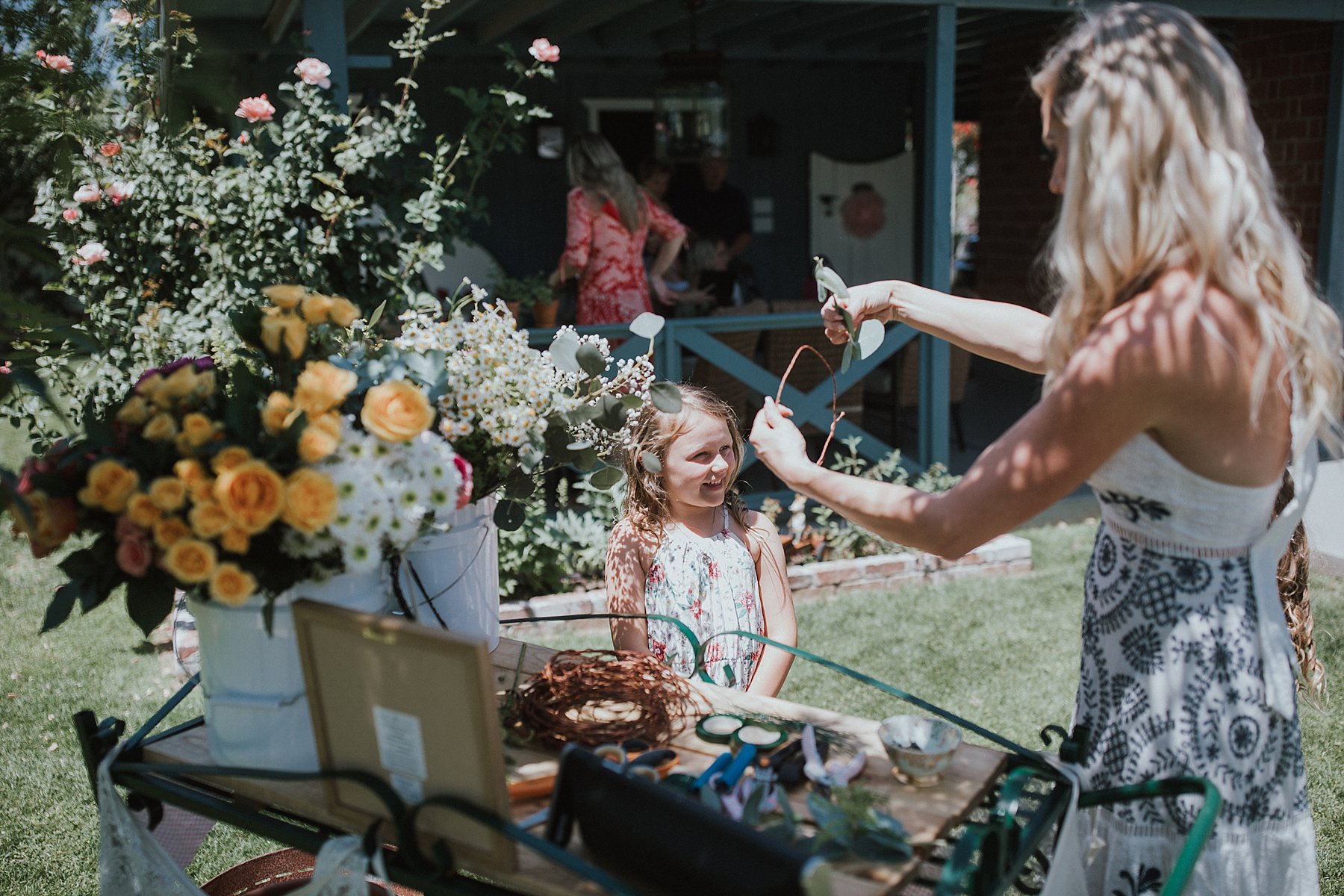 For seating I just huddled all of my outdoor garden furniture around under our shady trees. I would have loved to have rented furniture but the reality with budgeting doesn’t work and I am glad I already have so much seating for occasions like this.

Sometimes Benjamin asks why we own certain chairs – the heavy cast iron blue ones especially since he dislikes moving them and I tell him because they were $150 on Craigslist, that’s why. 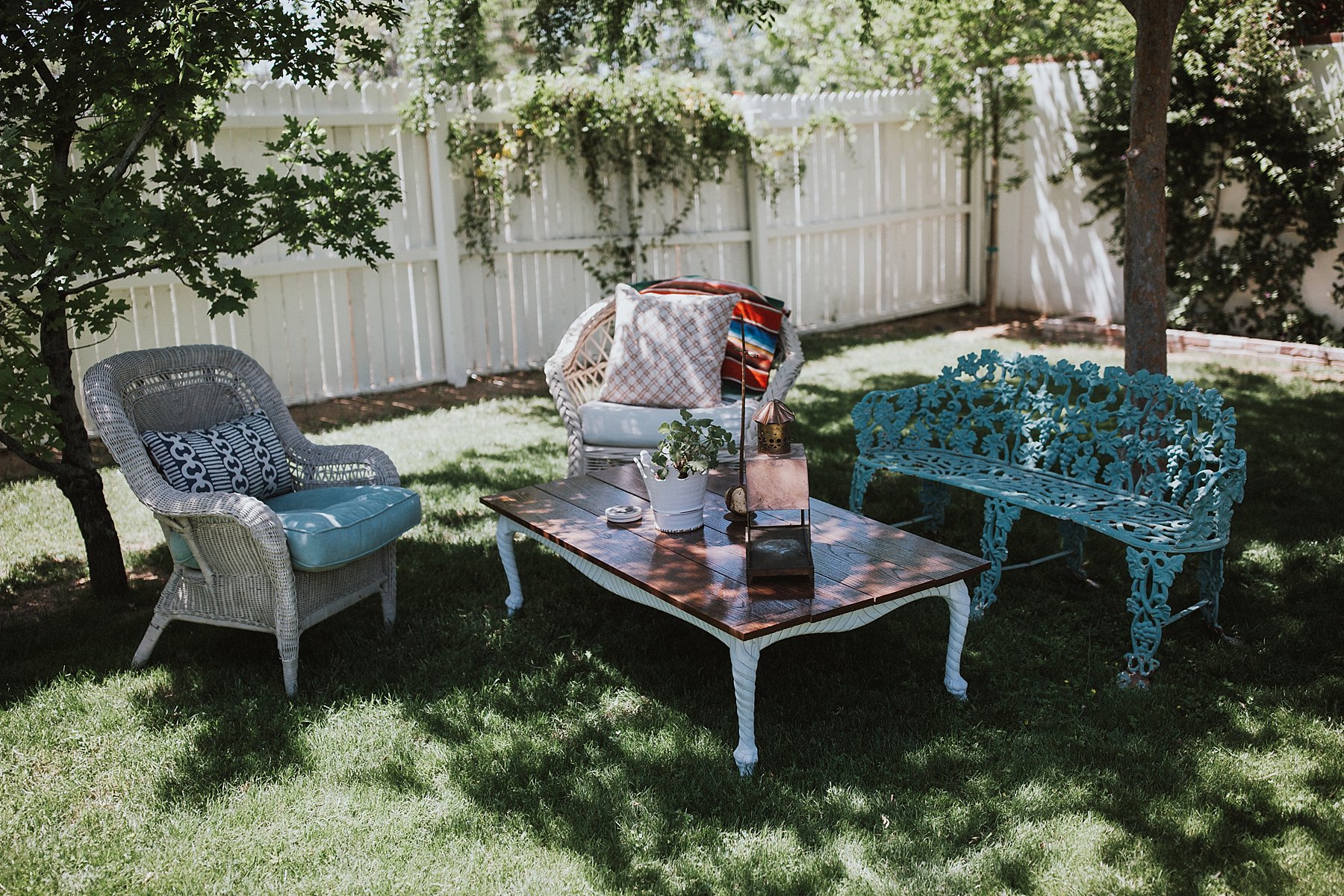 I did buy a new 3-piece folding picnic table online, it was on sale for $130 and I bought it from Walmart – although it’s sold everywhere, you just have to find the best deal.

I knew I’d use it again and we did for the Cinco de Mayo party I hosted a few days later. We are hotel/hosting central, party house, not really, but kind of. 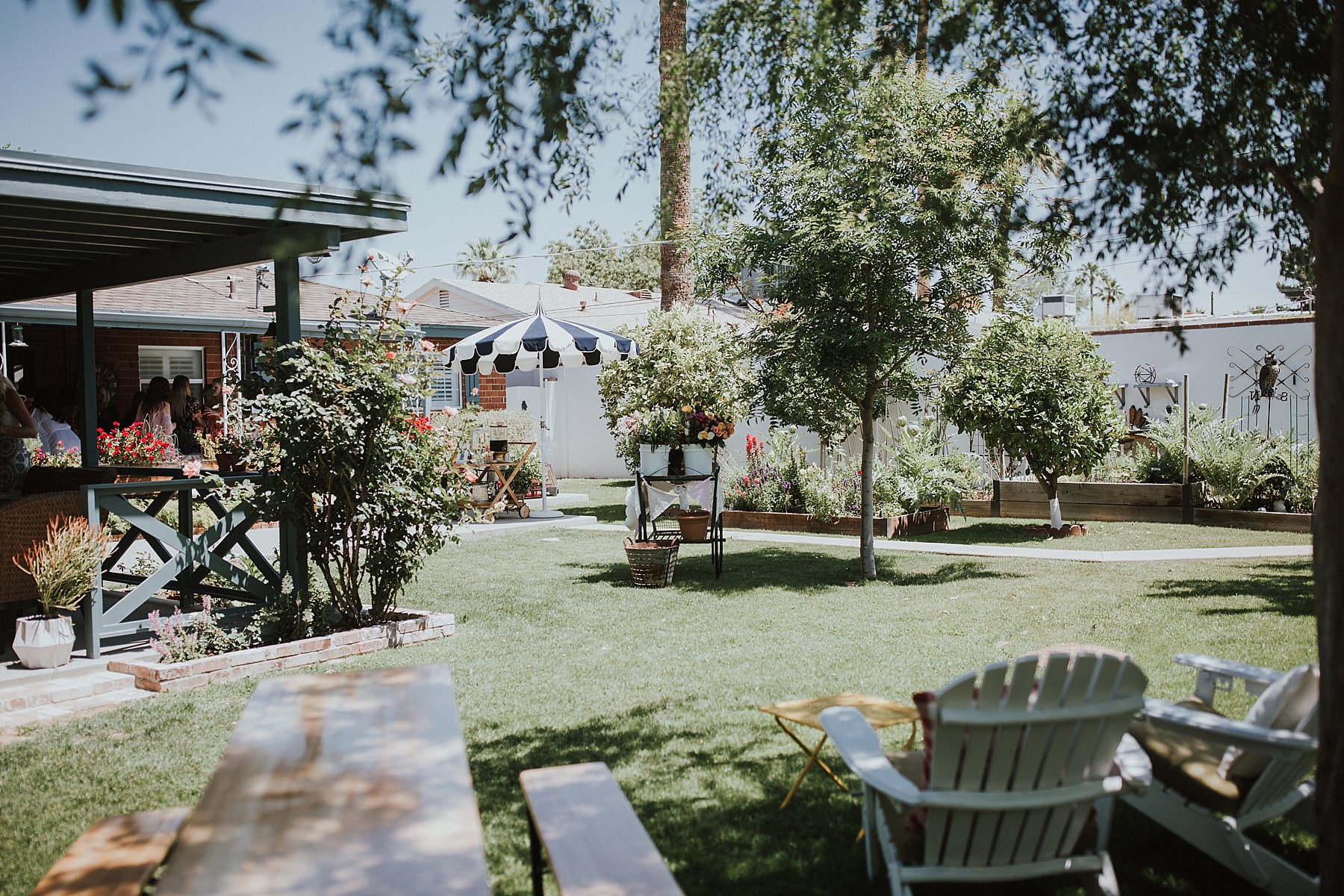 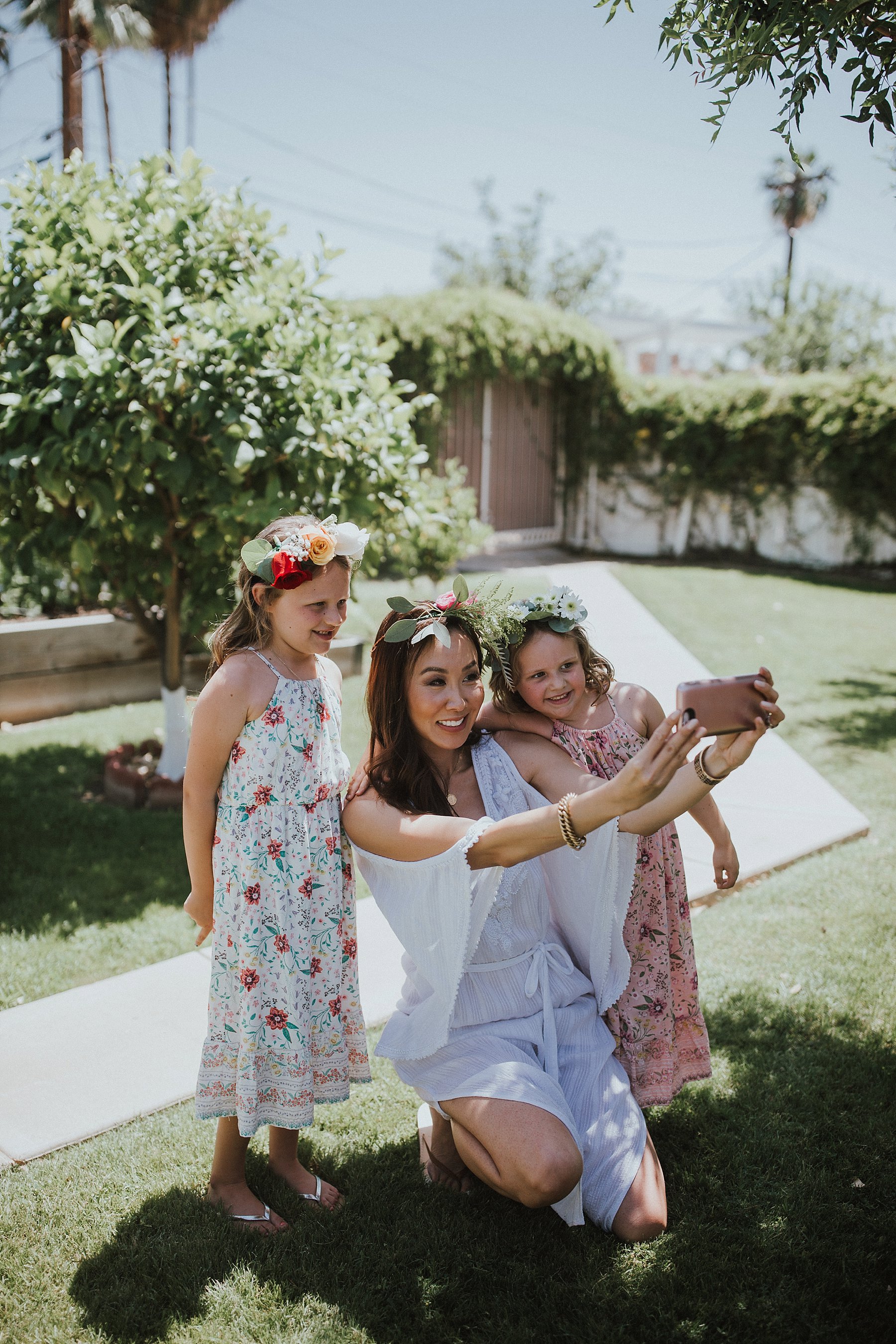 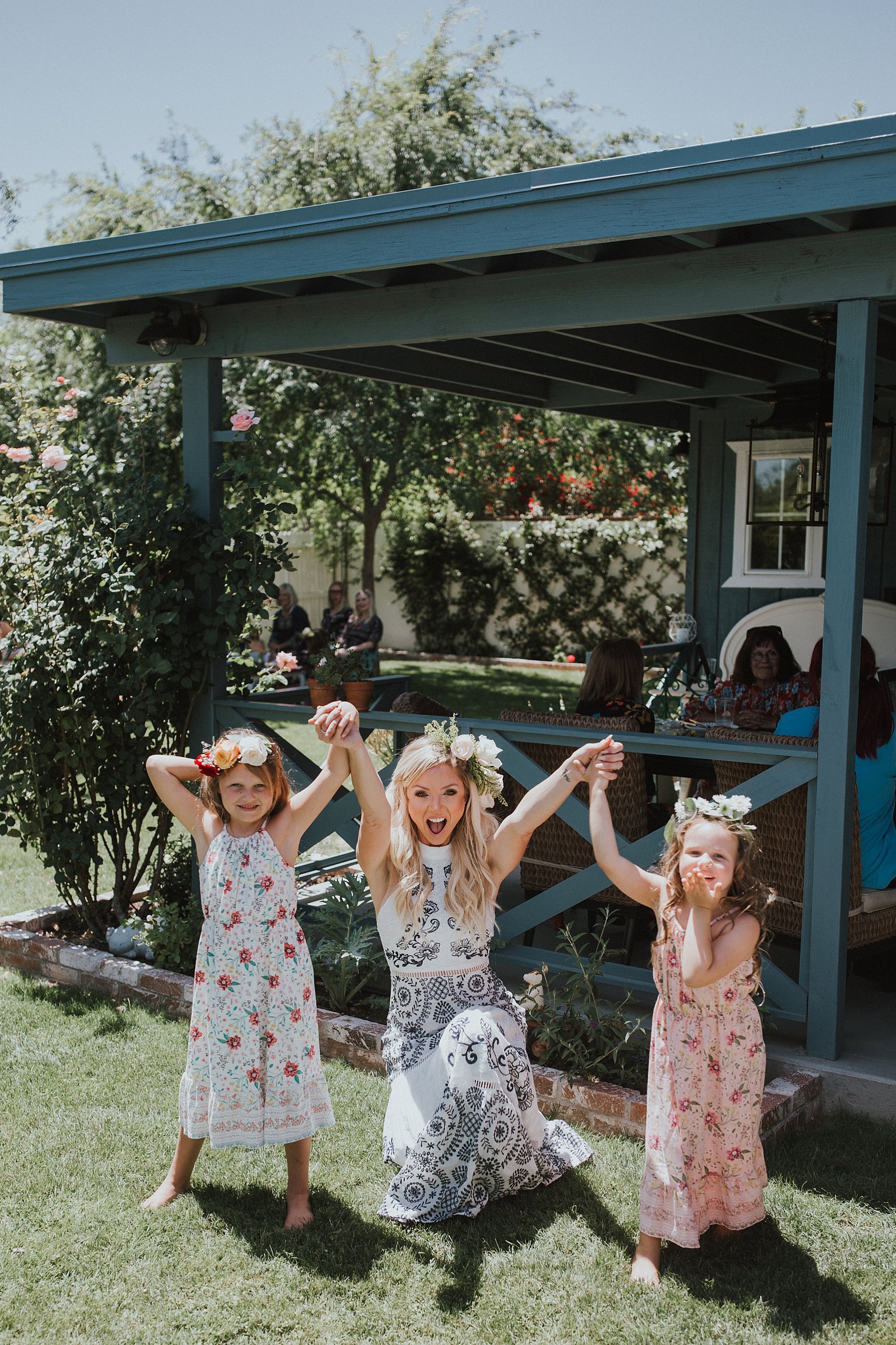 How cute are Melayne’s little nieces? They are so sassy and adorable, I just love Melayne’s entire family.

I’m now getting a glimpse into what Melayne’s future children are going to look like. 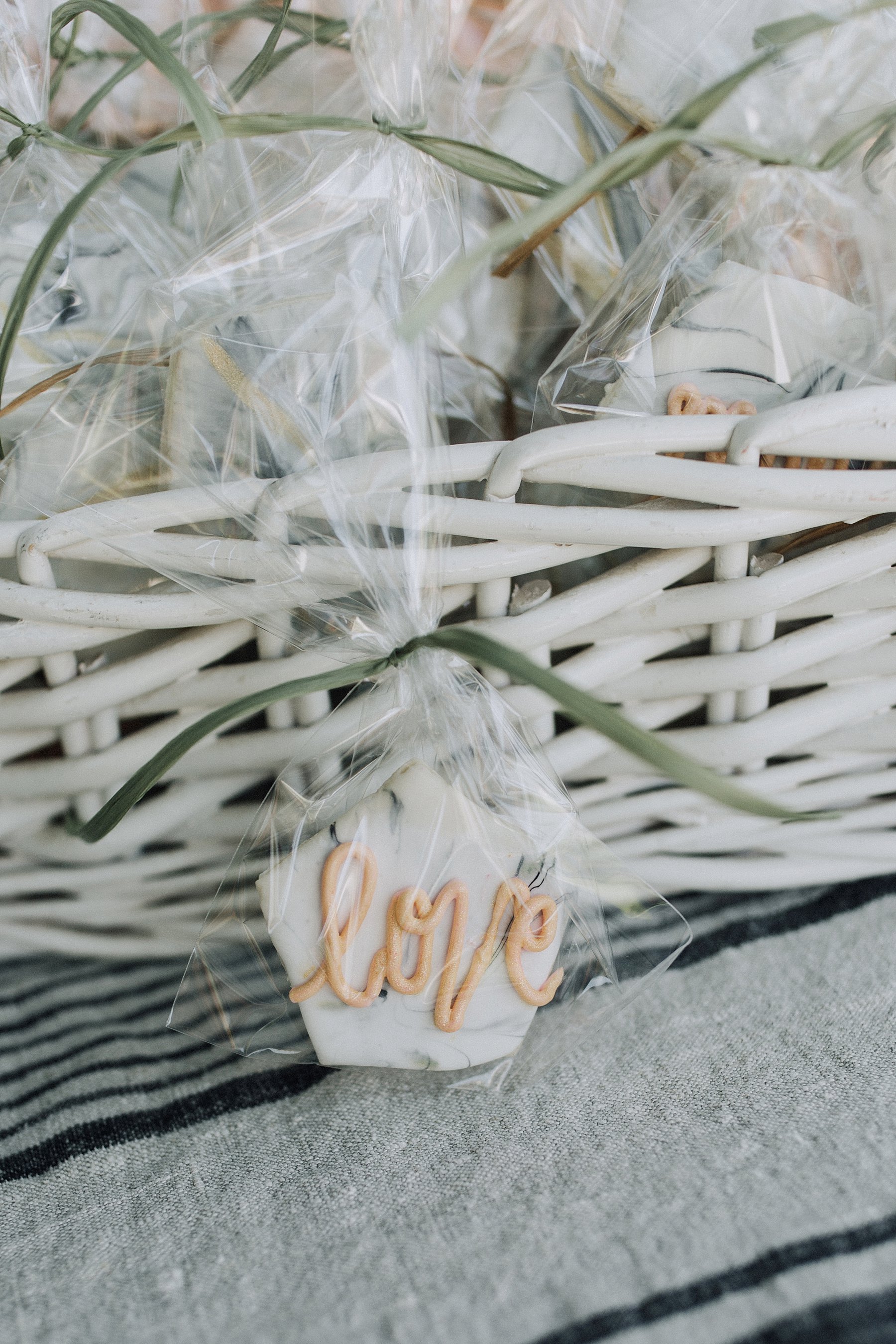 Savannah made these pretty gluten free cookies, they were not only beautiful with a marbleized frosted look, they also had cute sayings written on them like – Mrs., XOXO and love. They were delicious!

She’s graduating from my alma mater UofA from a full-ride scholarship this year, (way to go girly) and already has a job at Nike secured up from an internship she had with them last summer. I just had to brag about her because she’s so talented and sweet. She was also so organized for this shower that I was impressed (and if I can say kind of reminded me of myself, haha!)

Giving guests dessert as a goodie is a pretty good idea, hitting two birds with one stone.

Of course Betty had to make an appearance with Drew at the end of the shower. And that was our memorable time! We played the toilet paper bride game and said thank you’d and goodbyes. I had so much help with cleanup it was amazing, I’ve never had to not clean up after hosting, ever, and this shower I didn’t have anything to do because there were so many helping hands. I’m so grateful. 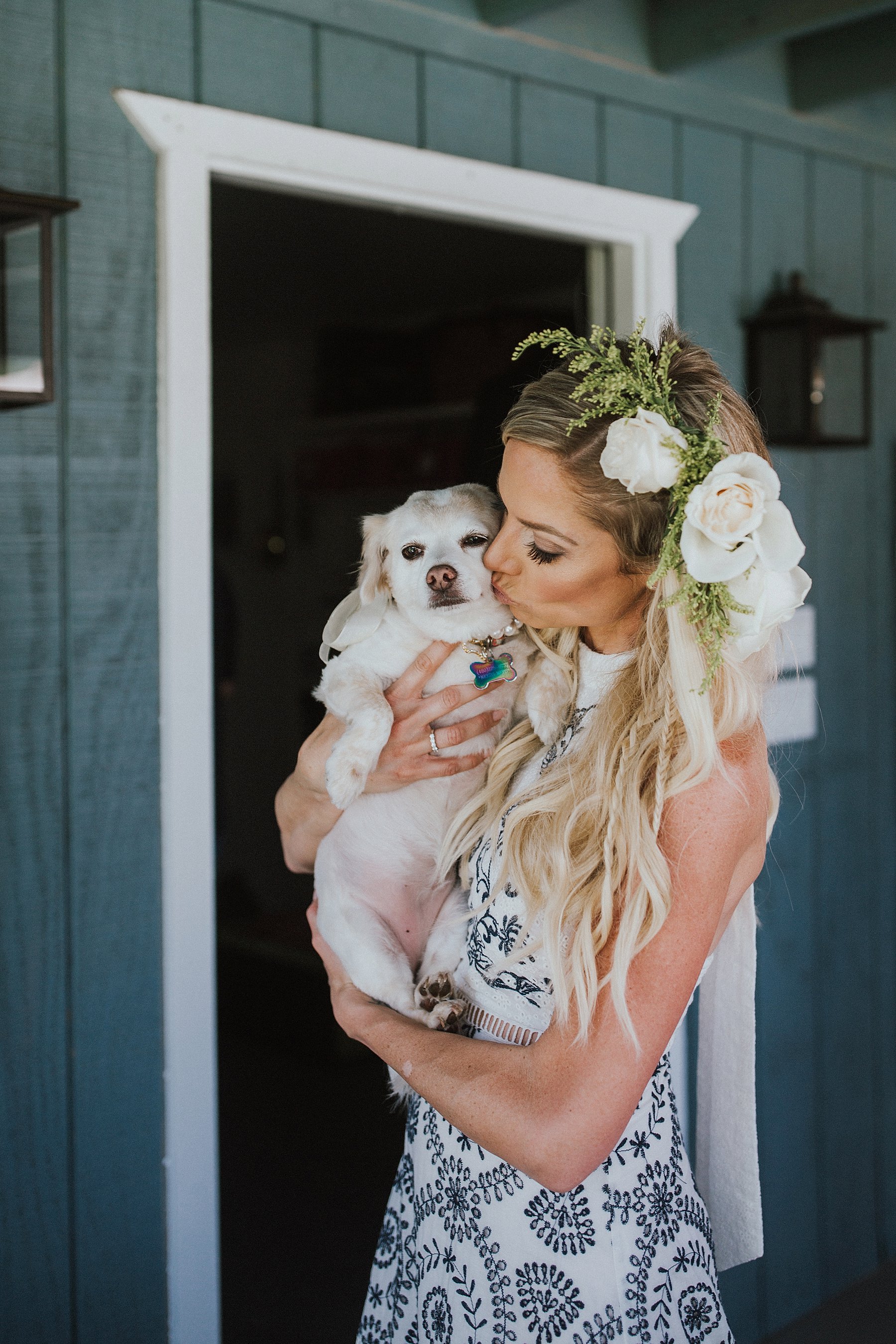 Melayne opened her gifts in the living room with Drew and family and a few friends. Make sure you check out their engagement session! Oh and can I just say I made Melayne’s flower crown, it was the first one I ever made and I was pretty proud of myself ;) so easy and a huge hit – do it for any shower or party, gals will love them!

There are 3 comments on Bohemian Bridal Shower Brunch.