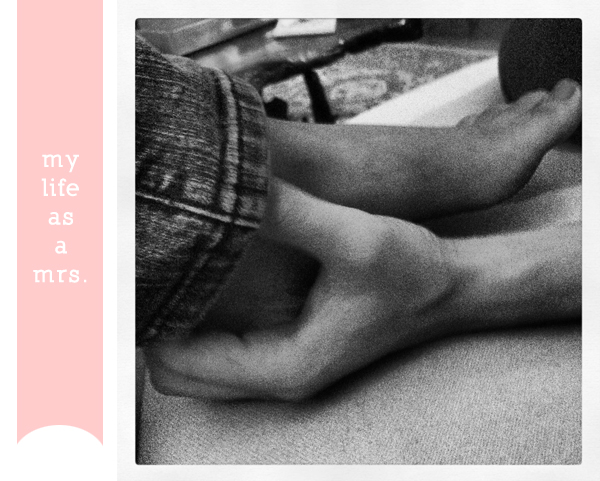 I swear I have poor circulations in my hands and feet – they’re always freezing.  Then again, I’m a girl so I think this is just a female characteristic.  When I crawl into bed sometimes I teasingly put my feet on Mr. Wonderful’s legs, sometimes his back, just to get a squeal out of him before he warms them up for me.  I am the only one who finds it funny I later find.

We have a large Pottery Barn sectional and I often sit in the corner with an iPad or magazine while Mr. Wonderful sits in the spot right between two cushions at the other end because that’s aligned with the television – clearly the best seat in the house.

On opposite ends of the couch, he holds my foot, kind of like we’re holding hands.  The act of affection warms up my foot and only when he reaches for the remote to change from commercials on ESPN to HGTV (after I plead), I realize that my feet quickly turn cold.

I recently had a dream or rather, nightmare, that was filled with ex boyfriends.  Oh the terror.  They were trying to convince me that I was to be with them, or for some unknown reason, I was stuck with this and that ex.  Remember, I married Mr. Wonderful after I turned 30 so I have quite a few exes which meant, it was a pretty long nightmare.  While going through the dream, my heart was telling me it was wrong, I felt uneasy, and was in a state of extreme dislike – like cold feet, I just couldn’t commit.  Then my heart, in the middle of this nightmare, knew there was some one and something else – a better feeling.  Like my heart just knew, even in this crazy dream.  Then Benjamin appears, as if he was in my thoughts all along, just waiting for me to find him.  And so, I search for him, find him, and then suddenly, I wake up.

The dream ends in a happy ending, just like real life.  I lay awake, heart pounding from all the Mr. Wonderful searching, and stare at the ceiling thanking God for the man who lays beside me, always making sure my feet are never cold.

Diana Elizabeth will be watching her beloved Twilight in theaters tomorrow night.  It was all she really wanted for her birthday.  She will proudly wear her Team Edward t-shirt one last time in public as the series comes to a close.  You know what she’ll be asking for her birthday next year – the movie on DVD.