Ask any of my best friends and I’d be the horrible person who’d actually put the word “hate” and “Disneyland” in the same sentence.  I know. This is why I don’t have babies yet.

But, it’s true.  I don’t like amusement parks or rides that make me feel like my brain is rattling in my skull.  Did I just insult myself?

My younger brother Blake, who I named after Blake from Aaron Spelling’s Dynasty when I was nearly three years old, attended Cal Poly San Luis Obispo.  He’s a fancy smarty pants engineer for the Navy.  He’s totally into the way cities run, operate, and layouts of things.  And, he got this special Disneyland tour back in his college day and since he lives close to LA, he has been to Disneyland nearly 20 times.  Seriously.

So for our wedding gift, my little brother decided to take the family to Disneyland!  And despite my reluctant behavior, I decided to open up my eyes since it’s been almost 10 years since I’ve been and let Blake give us the grand tour based upon wait times, show times, fast passes, and all.  I loved not thinking the whole weekend and it was Benjamin’s first time at Disneyland (he had only been to Disney World). 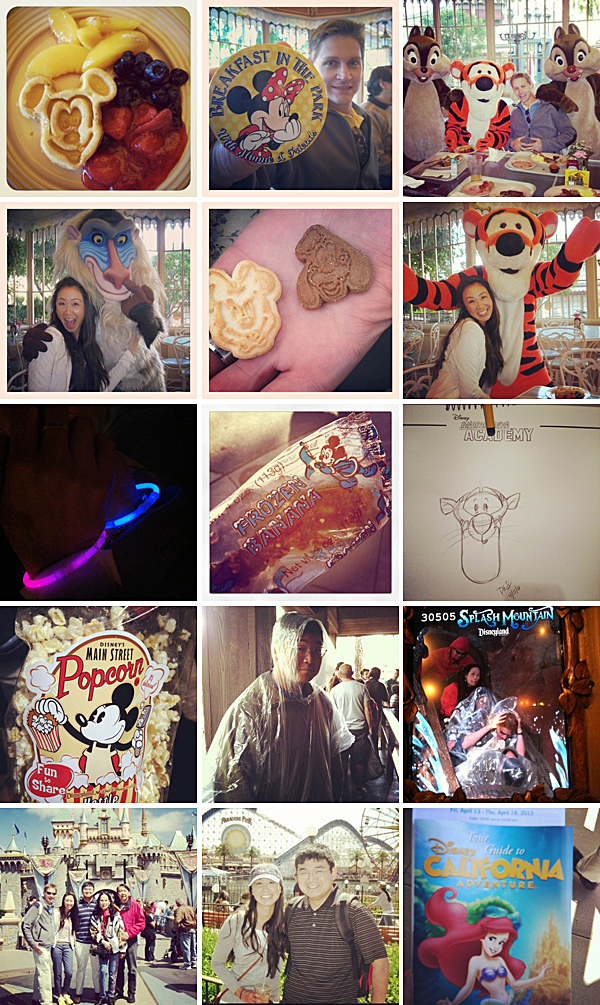 Yes, that baboon has his finger in his nose!  Bad monkey!

A machine told me I’m most like Cinderella and Mr. Wonderful is most like Jiminy Cricket.  We rode pretty much every single ride, our first day was 16 hours starting at 7 am with the Character Breakfast – Breakfast with Minnie Mouse which was a riot.  At first I ignored the characters when I arrived after all, it had been years since I’ve been around a stuffed human so I wasn’t sure how to react.  Then, after my dad got into it and started talking to them I thought, heck.  Let’s just go with it.  Minnie Mouse’s mannerisms are just adorable, those actors are so good.

It was freezing on Saturday and I didn’t want to get wet on Splash Mountain.  And I also didn’t want to look like a dork and wear a poncho like Blake is clearly demonstrating.  So, I snuck under Benjamin’s poncho during the ride.  Hahahahhaaaa.  He got wet the most.  He didn’t know why until he saw this photo.  Marriage is about sharing and taking it for the team!

Day two we headed to Disney California Adventure which I hadn’t been to for maybe 12 years or so.  It’s a nice slow pace – it’s smaller, there are more shows and relaxed rides and far less people.  It was perfect to start the day later and just show watch.

I do have to say that I’ve changed my mind about Disney.

Things I’ve observed from this past weekend:

On the tram on the way back after our last day, the driver quietly sang the closing song to the Mickey Mouse Club.  Now’s time to say goodbye to all our company.  M-I-C, (See you real soon), K-E-Y (Why?  Because we like you!) M-O-U-S-E.  It was darling, every one sang along and it was once sweet ending to a fantastic weekend.

Diana Elizabeth walked a ton, ate a lot, and had a super fun time.  Ok, Disney, you’ve got a pretty good thing going.

There are 3 comments on 16 Hour Disneyland Day.