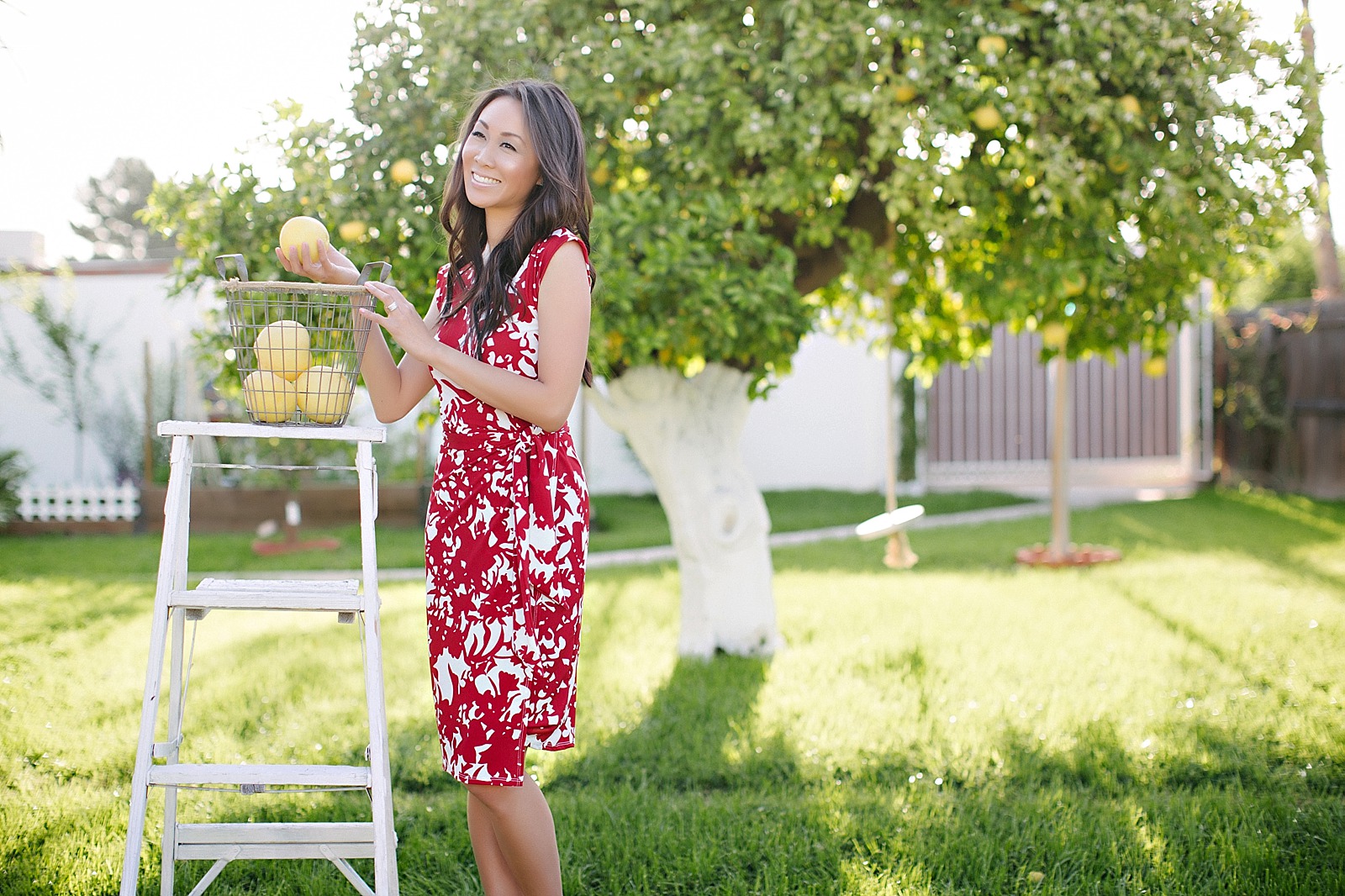 Five years ago I was house shopping with my friend and realtor, Kat. I drove around this particular neighborhood so often I was afraid someone would call me for cruising! I had my eye on this very house but it had a sign on it that it was market pending, which seemed for like, ever.

Then, the night before an appointment with Kat to see probably the 50th house, my parents were in town from California, and I logged onto my computer and up popped THE house on MLS. It had JUST hit the market that night and the next day was it’s first full day that it people could tour it.

We were one of the first people to walk through the home the next morning. I found the inside workable, but when we stepped outside, that’s when I fell in love – look at this beauty. 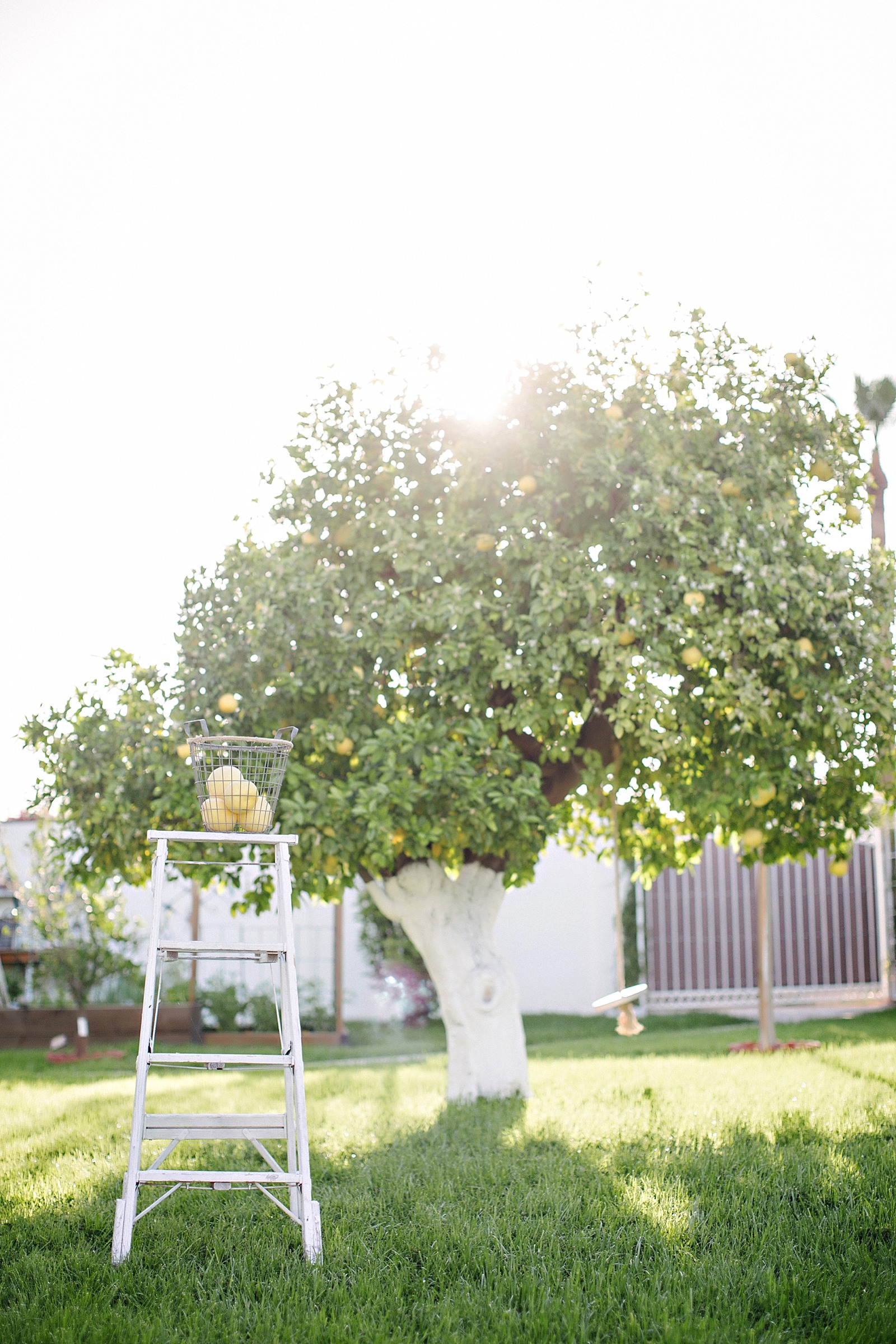 A citrus tree! I had seen them throughout the previous homes, it was a huge desire. On our way out, another realtor was on her way in, and I knew the house was going to be a hard one to snag.

And so, the bidding war began. 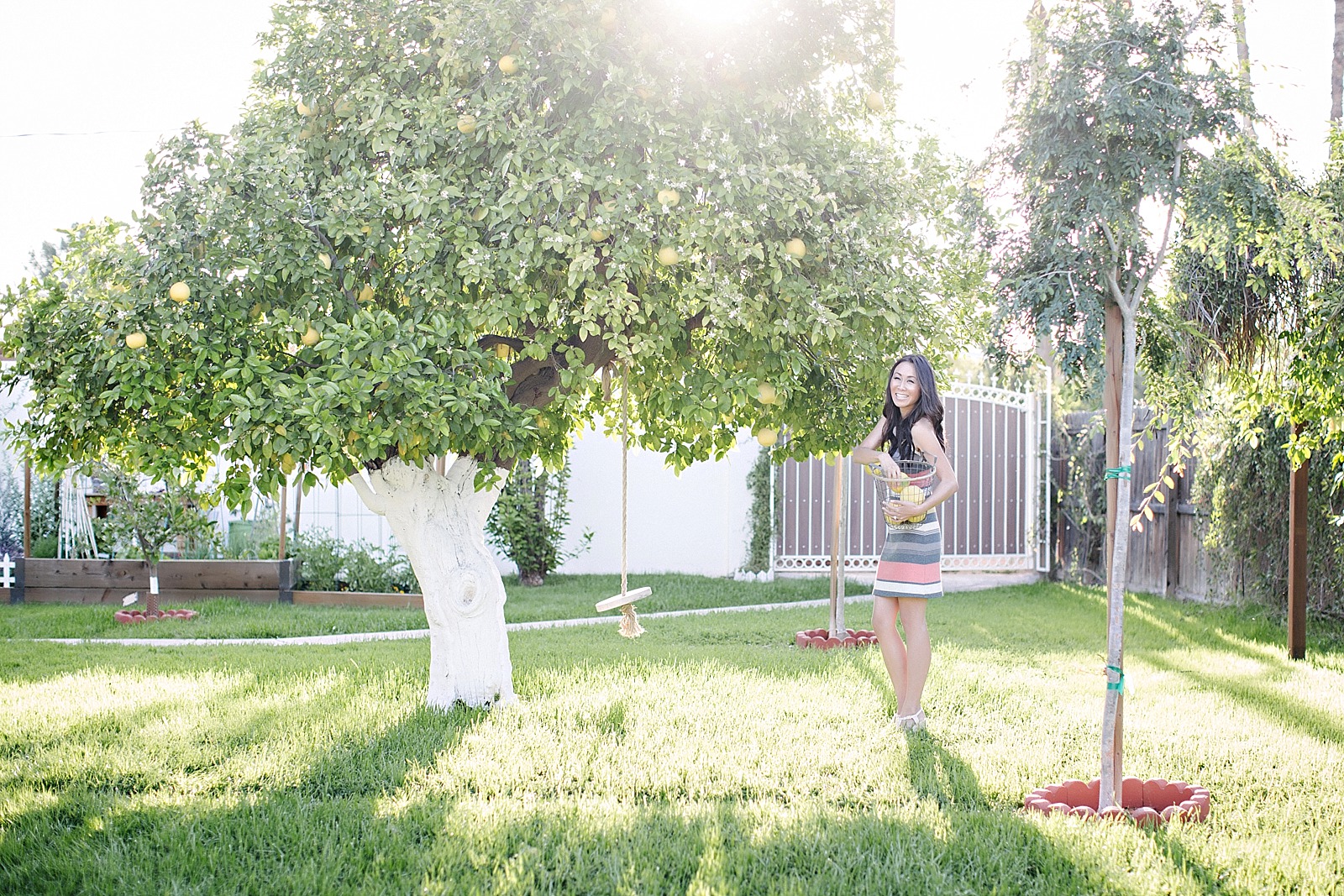 I obviously won, and I swear no one could have ever loved this house more – just ask my husband and any of my girlfriends. It’s not just the 1952 brick home, but the 65+ year old grapefruit tree – it could perhaps older, who knows. (We just guess since we know before the homes were built in the 195o’s, these citrus trees were all over, it was a former citrus grove.)

I realized the trees were dying off in our neighborhood. I soon learned fruit trees don’t live as long as normal trees.

I also told my dad I had a hybrid tree – it was a lime/lemon tree! I later realized those were baby grapefruits that were green and the current yellow grapefruits were old ones left on the tree.

“Who told you that it was a hybrid tree?” asked my dad, when I told him.
“I told myself that,” I answered.
“Well that’s your problem right there,” he said. 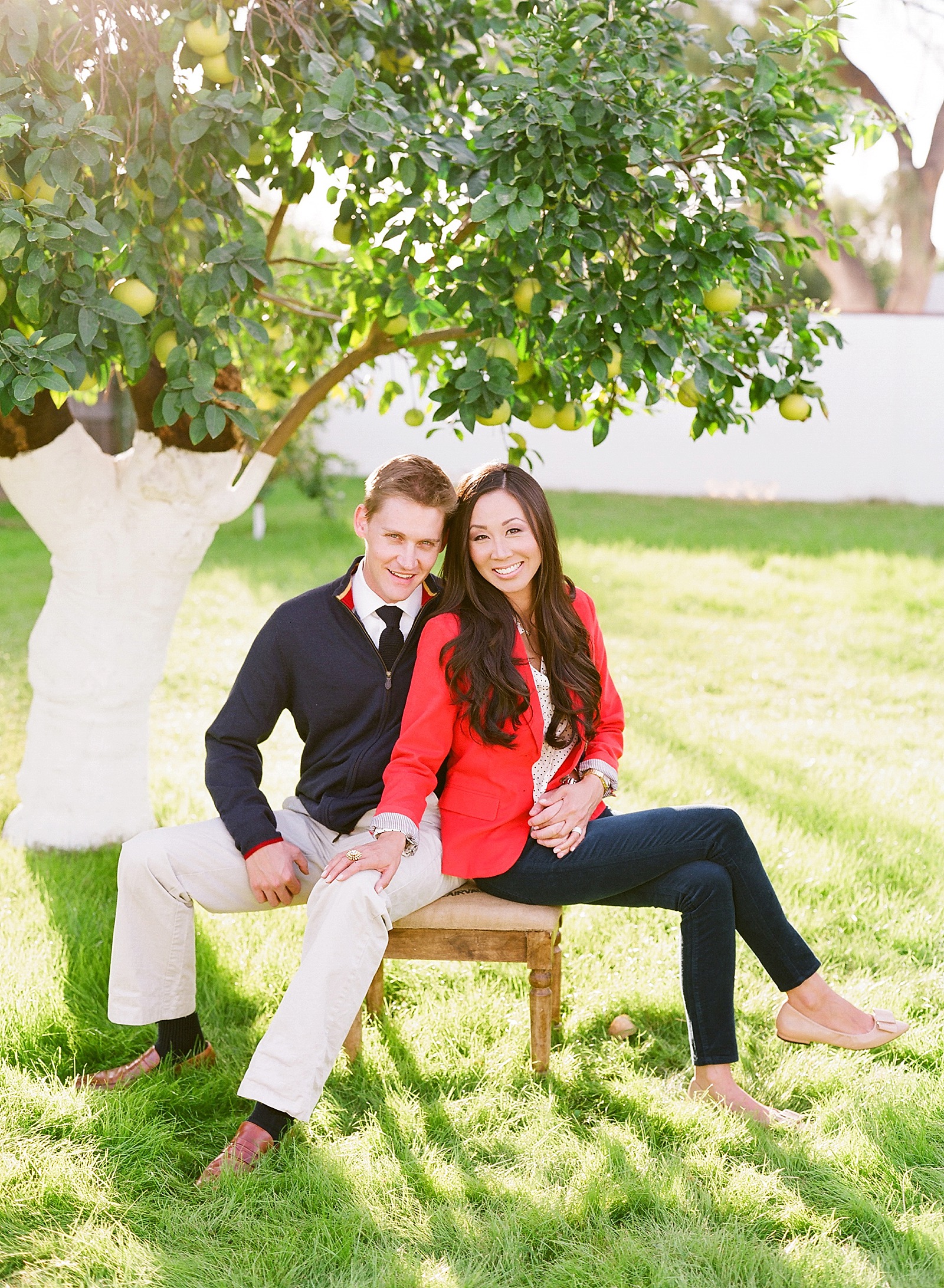 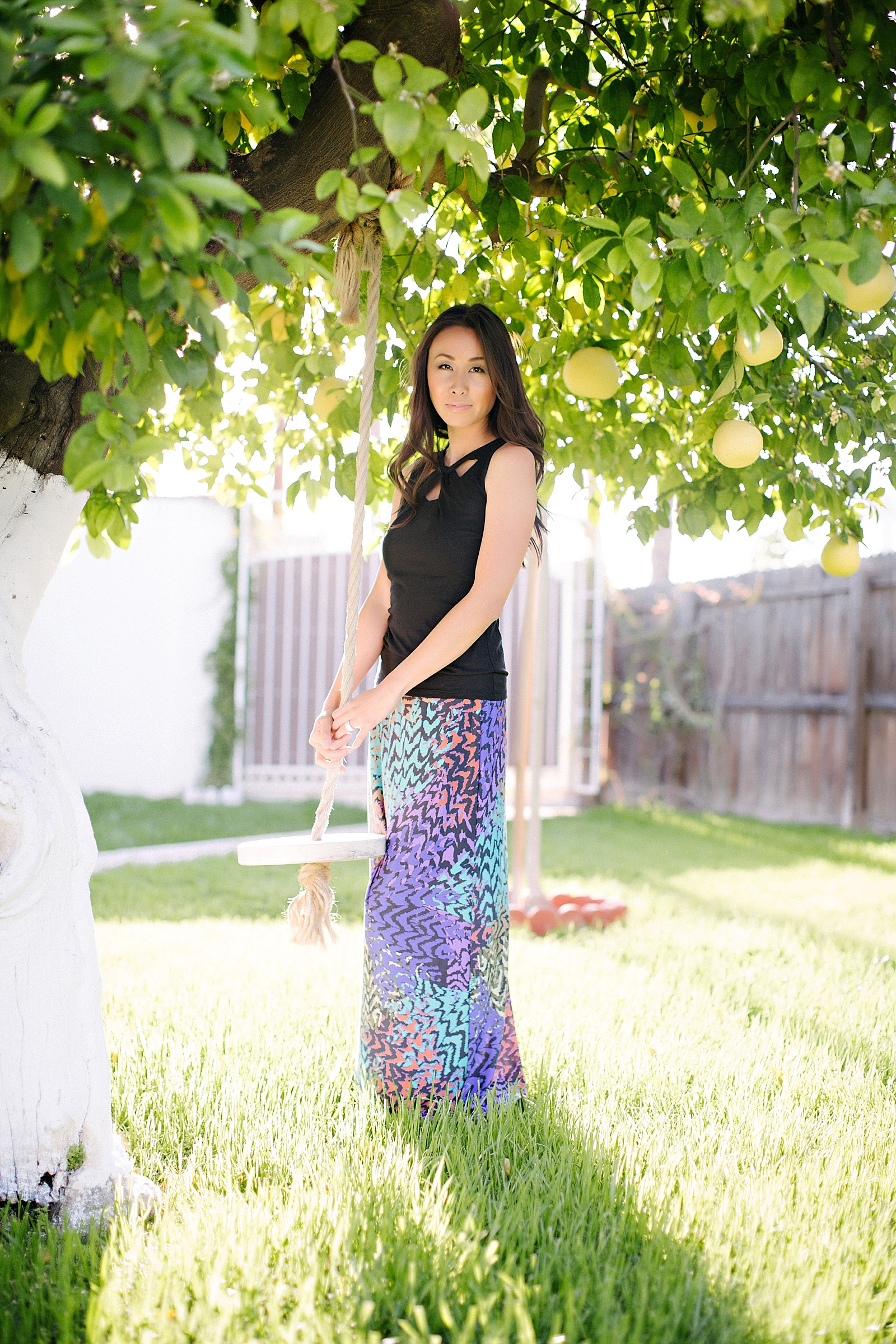 We had parties around her, celebrations with my best friends, photoshoots with clients, she made her debut in all our memories and photos over the years. I loved her so much I put a swing on her. Friends pulled up picnic blankets under her and held their babies, this was the giving tree – shade and grapefruits! 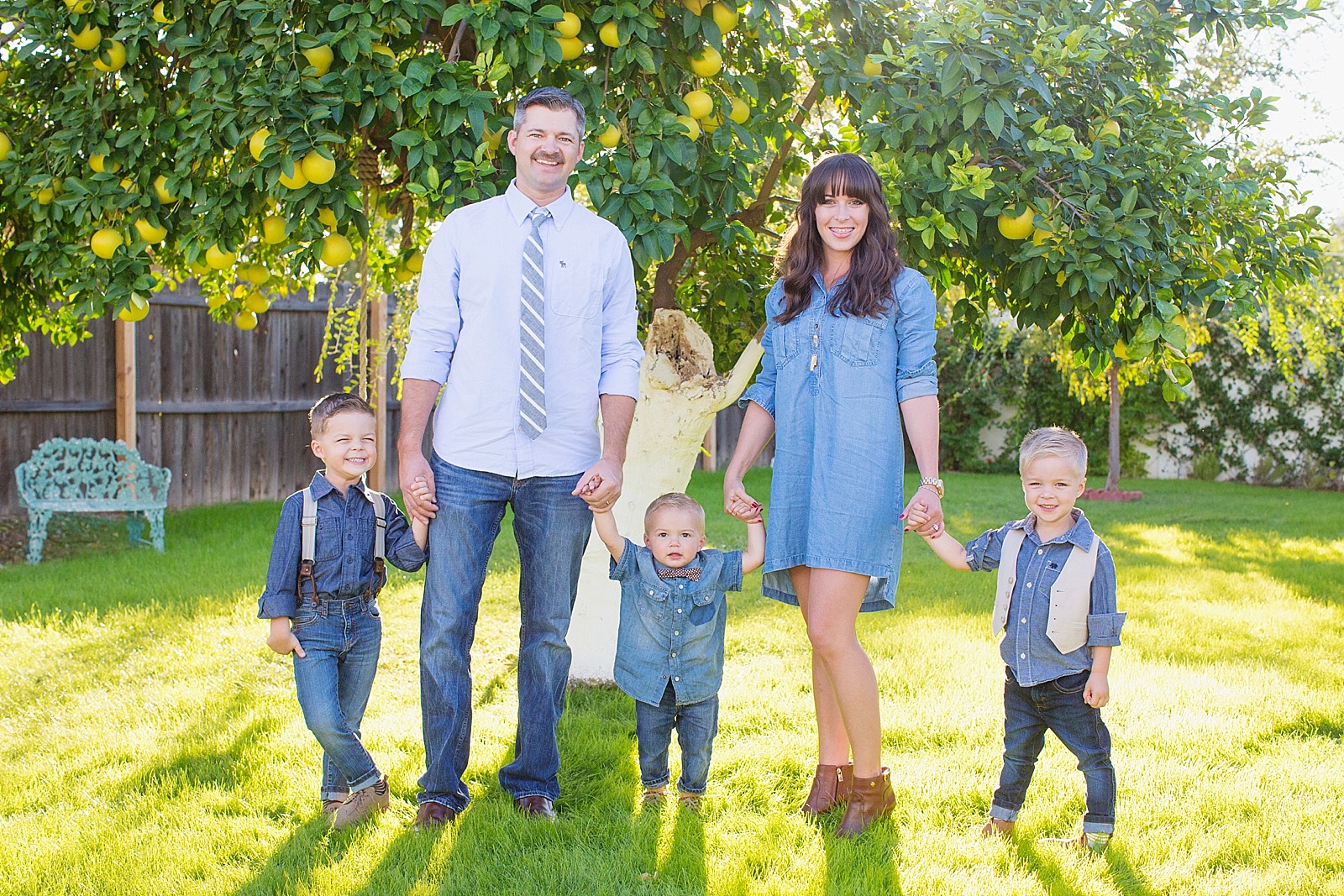 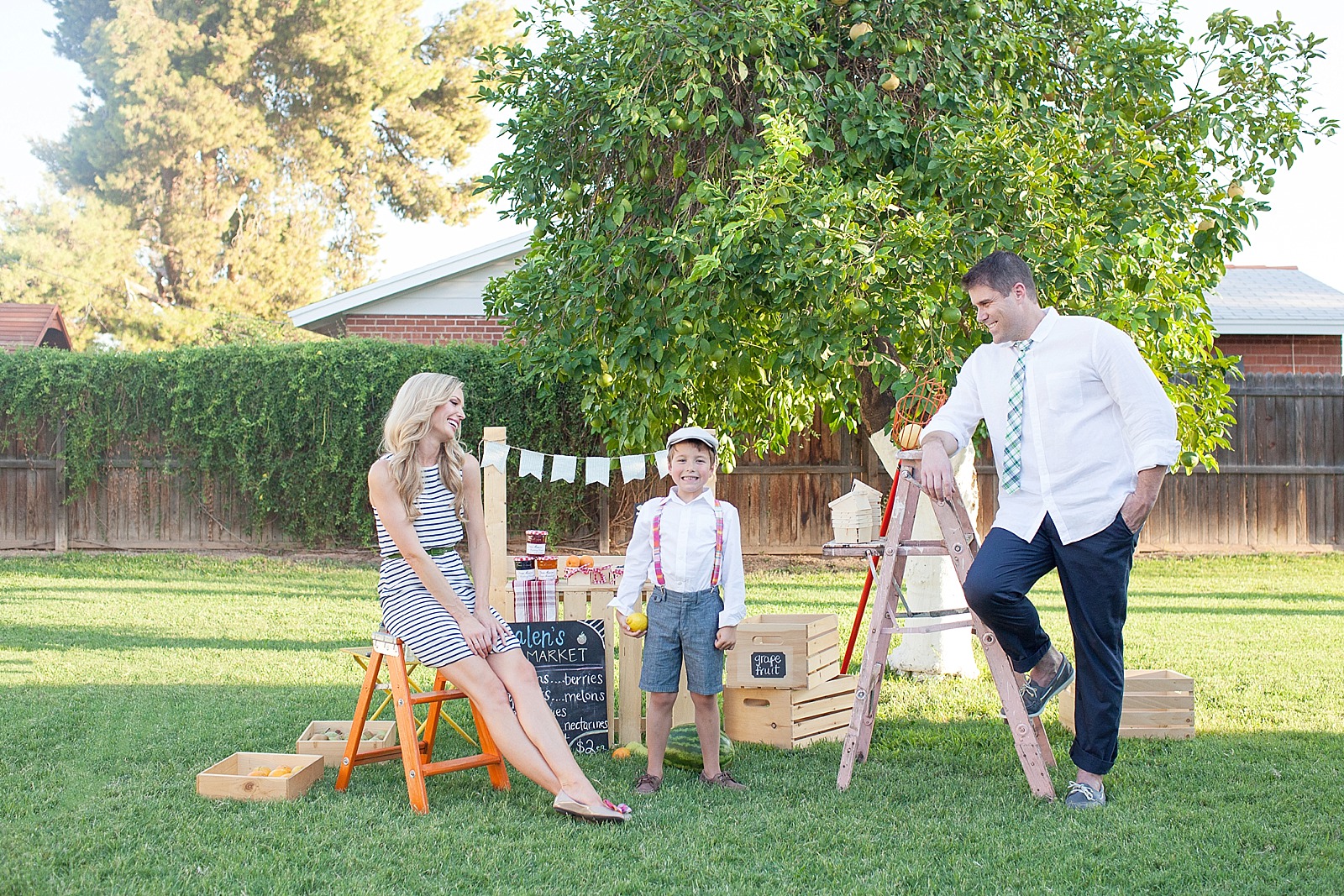 Last week we ordered an oak tree, one that changes colors from green to red in the fall. A worker from the nursery came out to our home to help advise us where it should go, before our delivery and planting date.

We talked about our grapefruit tree and discussed she’d probably make her exit in 5 or so years, so we should prepare for her departure – you know, plant a tree so by the time she passed away, the new tree would be significant enough to give us shade. We even discussed pruning one of her limbs to make room for the new tree.

We settled on a very large California Sycamore tree to put almost right in front of her, to time it just right. In 5 years she’d be gone, and in 5 years we’d have a very large shaded tree that would be the new center of our backyard.

Later that night, Benjamin called me outside alarmed of a smell of smoke – we never figured it out.

As always, even in the dark, I peeked to see the tree, out of habit –  every time I walked by the window I would sneak a peek look at her, she was my scene of comfort. But that night, in the darkness, I saw something strange.

The middle of the tree is gone, as if a dinosaur, a T-Rex, took a large bite out of the top of my tree. A big chunk of her was on the ground, and it was significant I that I thought, oh no, this could be the end. 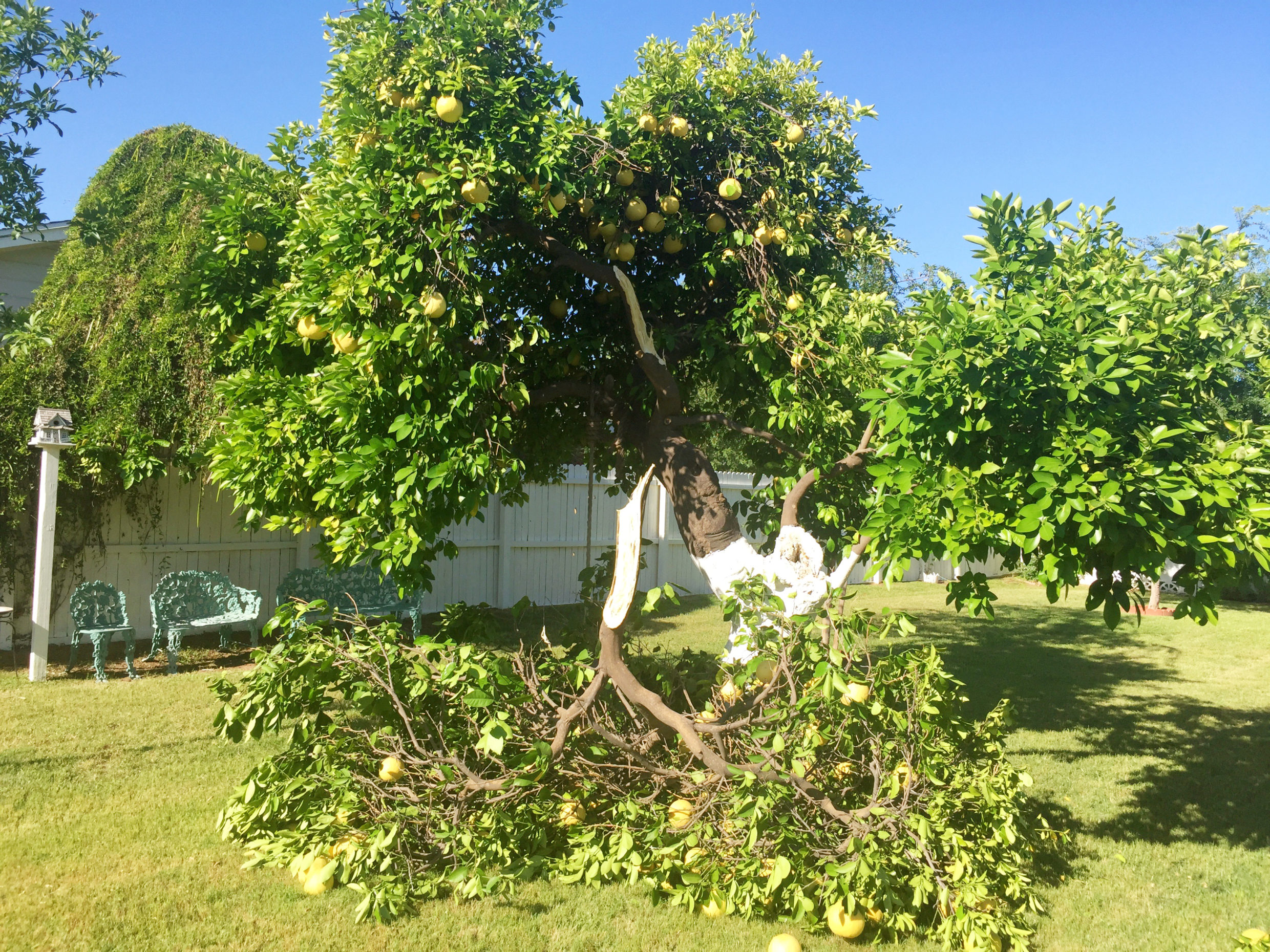 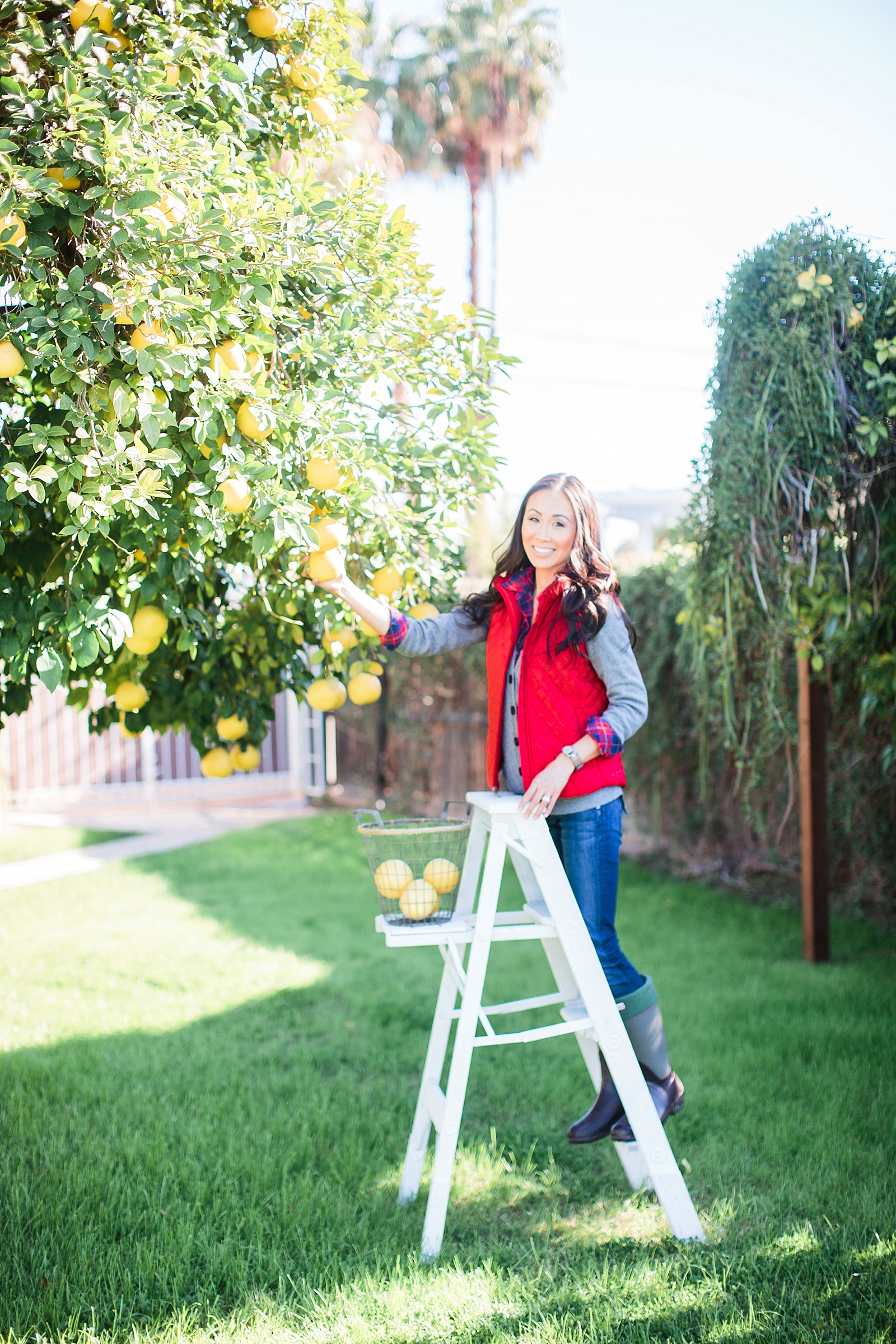 Do you think she heard us that morning about cutting off one of her limbs that it hurt her feelings and she immediately just started to give up? It’s like she tried to commit suicide!

Now I’m not a tree hugger, though I might be becoming one. When you want to spend time with something, give it care, take photos with it creates memories, it’s difficult to not fall in love with something that brings you happiness and be sad when you realize the memories stop – this can be a person, thing, chapter in life.

I have a hard time letting go and moving onto new chapters, especially when the previous chapter was just so good I wanted to stay in it.

My dad and mother-in-law think the tree can be kept, for a little while longer anyway. Until I’m ready to let it go, or she’s calling it quits, who knows which will come first. I can still photograph parts around her, she’s just – Getting older. Losing it. Her body is changing. 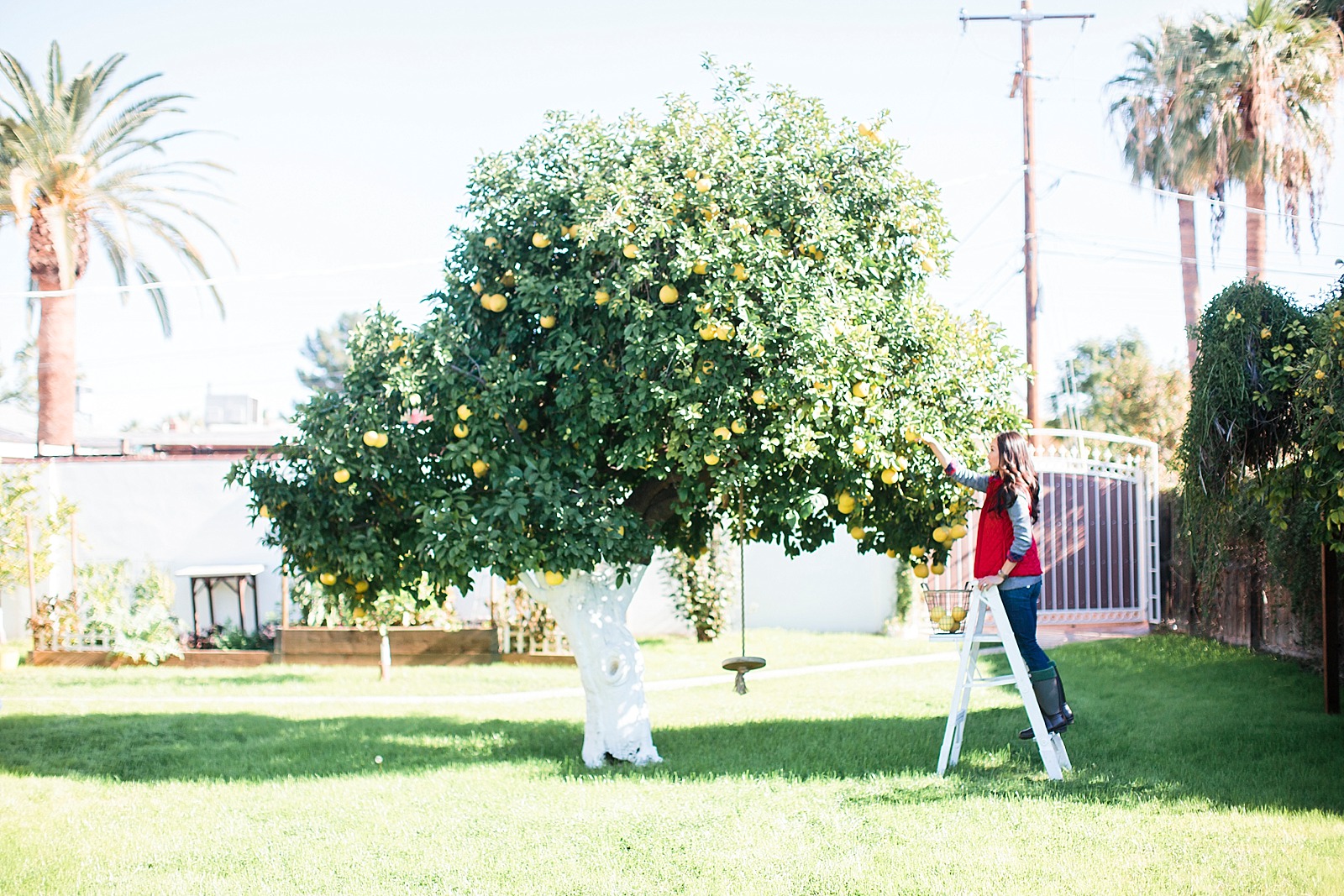 On my to-do list this week was to film a backyard tour. I know, I should stop going on because I’m twisting the knife. I should’ve pruned the branches, picked more grapefruits to disperse the weight. Shoulda-woulda-coulda. How can one gain a life lesson from the dissolve of a senior grapefruit tree? Let me tell you.

You learn that it’s OK to admit a tree/said thing could bring you joy. You recognize you can fall in love with everyday scenery and even a zillion photos doesn’t feel like it was enough when it’s gone. Then you wish you laid under the tree more, enjoyed the shade, spent more time outdoors, ate more grapefruits, the list of feelings goes on – and regret comes, as it always does in life when good things start to come to an end. Suddenly the tree lesson seems interchangeable with the way we feel about people, and other things that hold significant value in our life.

Then, you give yourself permission to cry a little because you realize it’s OK to be sad because you’re just not ready for tomorrow to be the start of a new chapter, but you know, that’s life and sometimes an even greater chapter awaits. 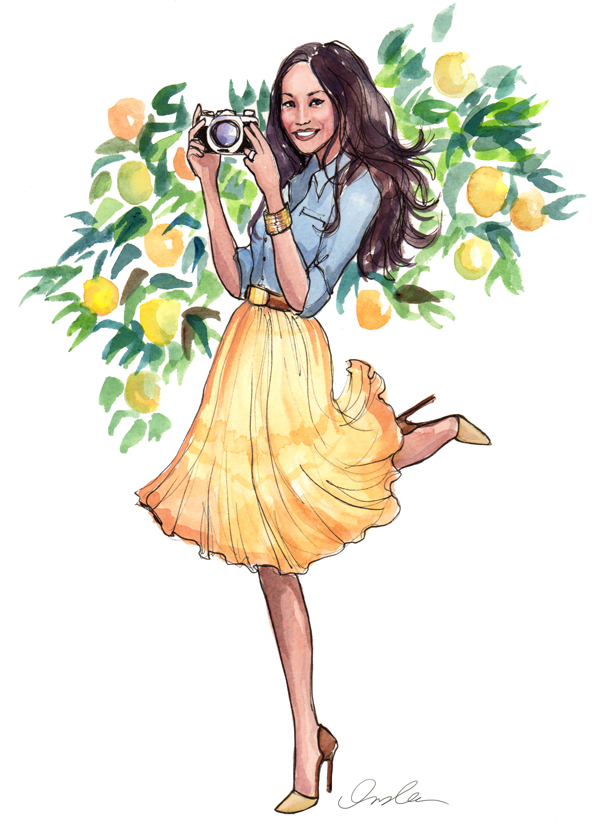 I’m so thankful for photos – these taken by my dearest friend Melissa Schollaert, and the fashion shots Kokoon by Melissa Louise. With that said, go on and hug your favorite tree – and talk nice to her, they’re listening.

There are 2 comments on My giving tree.