All photos by Ryan Ray. 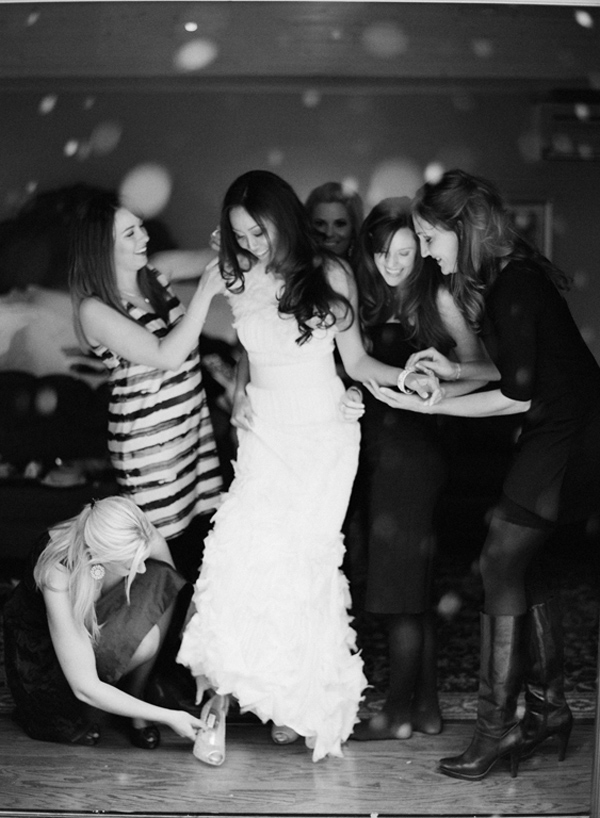 I didn’t find it necessary to have a bridal party with our wedding being small.  My girlfriends who were there in attendance are my best friends, the ones I talk to regularly, who have been by my side through thick and then, prayed for me and with me, and those who I want to be more like.  They all got ready in the same room as I did and though I was fairly quiet, I enjoyed hearing their laughter, dialogue, and just having their presence with me that morning.  It was such a peaceful and calm time for me as I watched the snow fall and reflected on so much happiness while Lizzy did my makeup.

The series of these shots of me getting ready with my girls that has been getting all the attention was actually in front of a sliding glass door that Ryan Ray opened up so the cool air was coming in as the snow fell.  It was magical! 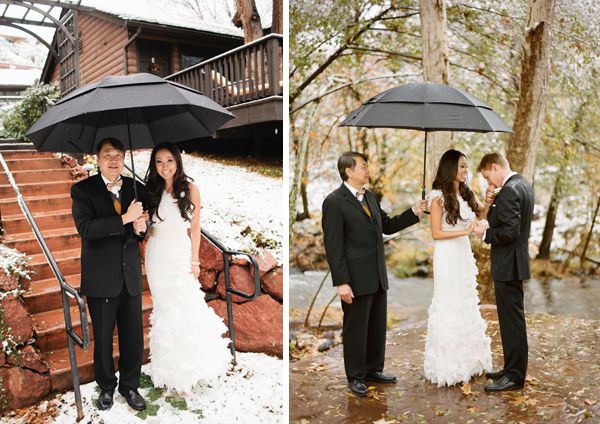 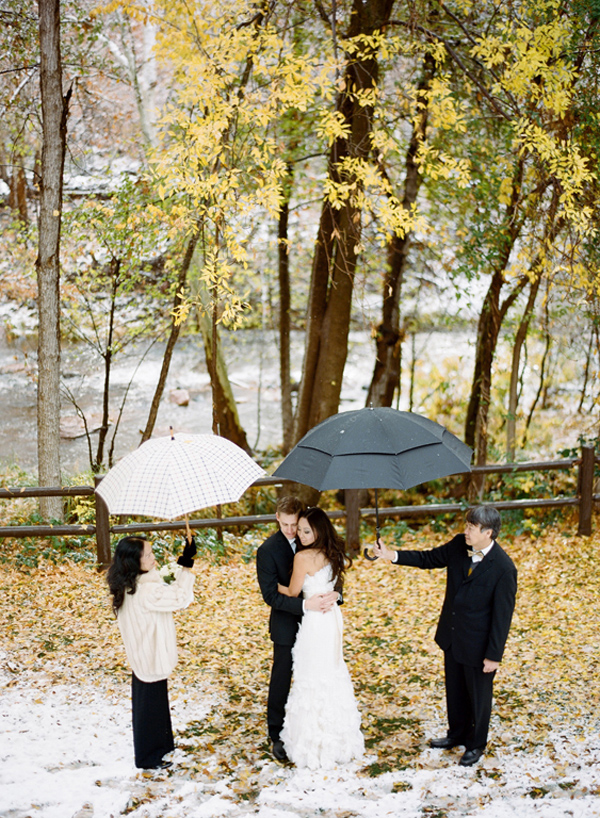 I’m a wedding photographer, of course I did a first look.  However, this was a bit modified. Because I wouldn’t be walking down an aisle to any music and our guests would see me for the first time as they circled around us, standing for the ceremony, I wanted my dad to walk me to my first look with Benjamin. The above photo is one of my absolute favorites.  Umbrellas are from Brooks Brothers, of course.  I think the Phoenix store wasn’t quite sure why I needed three umbrellas, it was probably the most they’ve sold all season.  But, I knew there was a chance for rain or snow, and I wanted to be prepared in style. 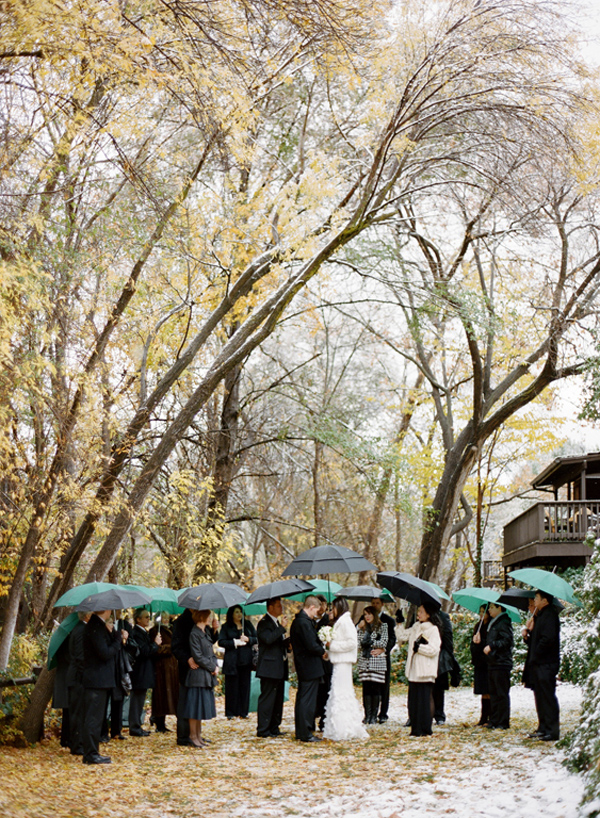 Ryan Ray said it perfectly on his blog when he described our ceremony as, “You couldn’t tell a friend from family.  The support was that great.”  That was exactly how we envisioned it.  The decision wasn’t easy when it came to the guest list, when we thought it would just be our parents.  As we started to plan, we decided to extend it to the friends who really were like family.  We also didn’t want to deal with a big wedding, wanted to honor a budget, but most of all, we didn’t want to do anything for show.  And I especially didn’t want to turn into a bridezilla who was still managing wedding details the week of.   I wanted my sights to be on the fact that I was marrying my best friend, not wedding details, so the smaller the wedding and guest list and details, the calmer the both of us would be.  Our wedding was about us getting married in front of God who brought us together, and our family and closest friends who have supported us individually, and together, rain or shine, or snow.

Our resolution was having a fun, and larger casual reception with all of our wonderful friends a few months later. 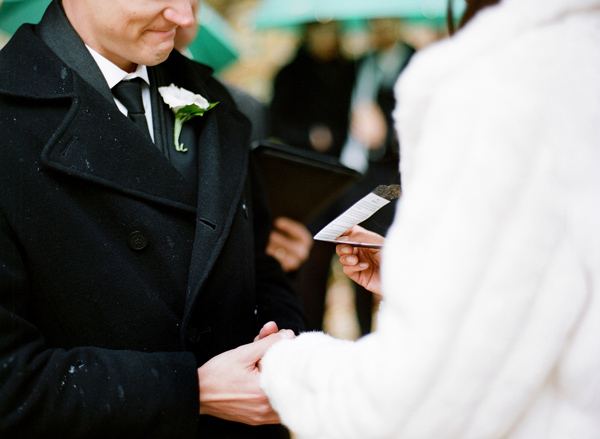 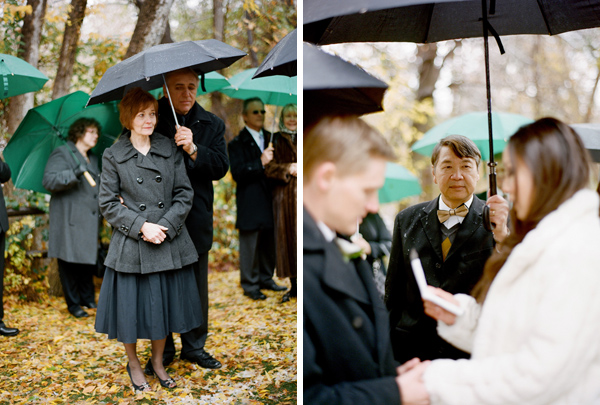 We wrote our own vows in an almost identical format.  I’ve heard a few vows here as I’ve shot weddings but I never thought what my own vows would be like. If you come to our house, you can read them as they are proudly framed and titled “Our Promise.”  And yes, those are my vows above typed out, matching the invitation.  Benjamin wrote his on a post-it, and every one laughed when I pulled mine out and then he pulled his out.  I love him for it.  Benjamin cried a lot and he would only occasionally look up at me.

How adorable is my mother-in-law in her cute outfit?  And I know you’ve already seen this photo of my dad but I just love it.  He was right up there in the action holding the umbrella over Benjamin and me. 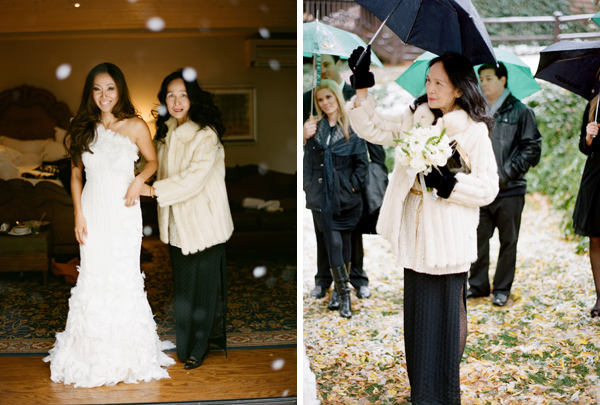 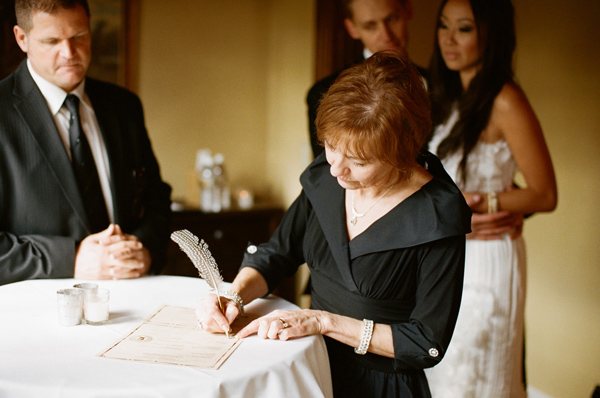 I’ve captured some beautiful weddings.  The wedding of Jillian and Patrick really moved me when they had their moms heavily involved.  It was Jillian’s mom who zipped up her dress, and their moms who signed their marriage license.  After I saw that, I thought, I’m definitely going to do that at my wedding.  And since we didn’t have the traditional bridal party, we had our moms do the honor.  Benjamin’s mom held our rings, my mom held my vows and bouquet, zipped up my dress, and our mothers were our witnesses for our marriage license.  It’s so special to look at it and see our moms signature.

You can probably tell by now that Benjamin and I hold a high priority for family.  Our fathers gave toasts as we cozied up by the fireplace, and my dad started off with saying, “I’ve waited 10 years for this,” in which my initial thought was, sheesh Dad, way to rub it in that it took me a long time.  But what immediately followed was a story that began 10 years ago when he was diagnosed with terminal brain cancer (Lymphoma) and while he didn’t know the Lord yet, he asked God to save him so he could see his kids get married.  He explained that he was thrilled that the day came, and God gave him what he asked for.  You can say that Benjamin and I both cried, a lot.

Benjamin’s dad gave a sweet toast, he mentioned Benjamin’s grandfather who I never head the pleasure of meeting but I know really molded Benjamin.  He passed along his blessing and though we had met for the first time the night before, he called me, “refreshing.”  I liked that.  We felt so honored to have our dads give toasts to those around us and we felt so loved and so very blessed to have been raised by such amazing fathers.

Diana Elizabeth says she’s so glad she did a first look especially with the weather – by the end of the ceremony her hair was sopping wet!

There are 6 comments on My Wedding Details. Part Three..