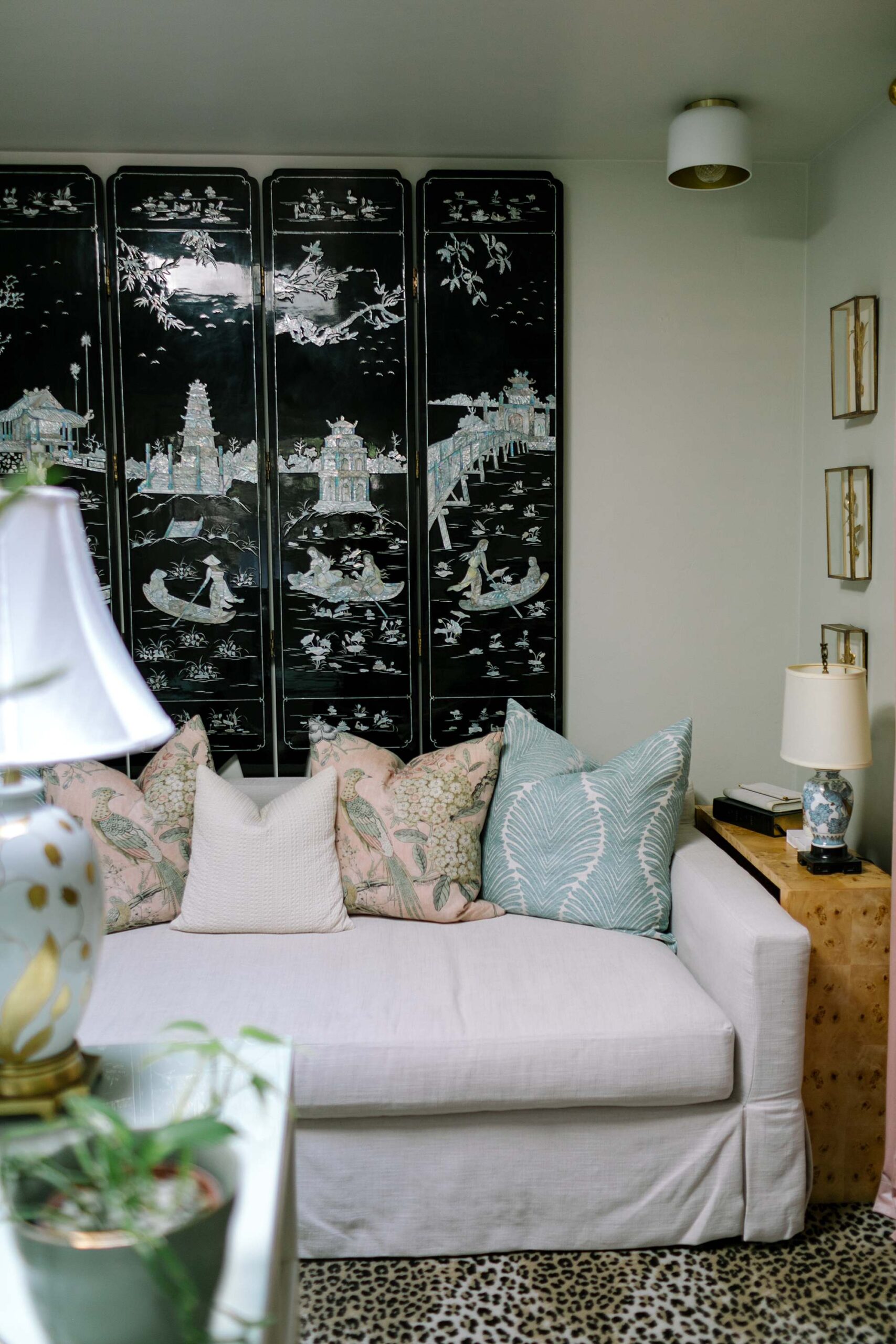 I felt like I needed a change in my office and a wool leopard print carpet was just what I needed! It’s bold and soft and it has transformed this space, take a look! 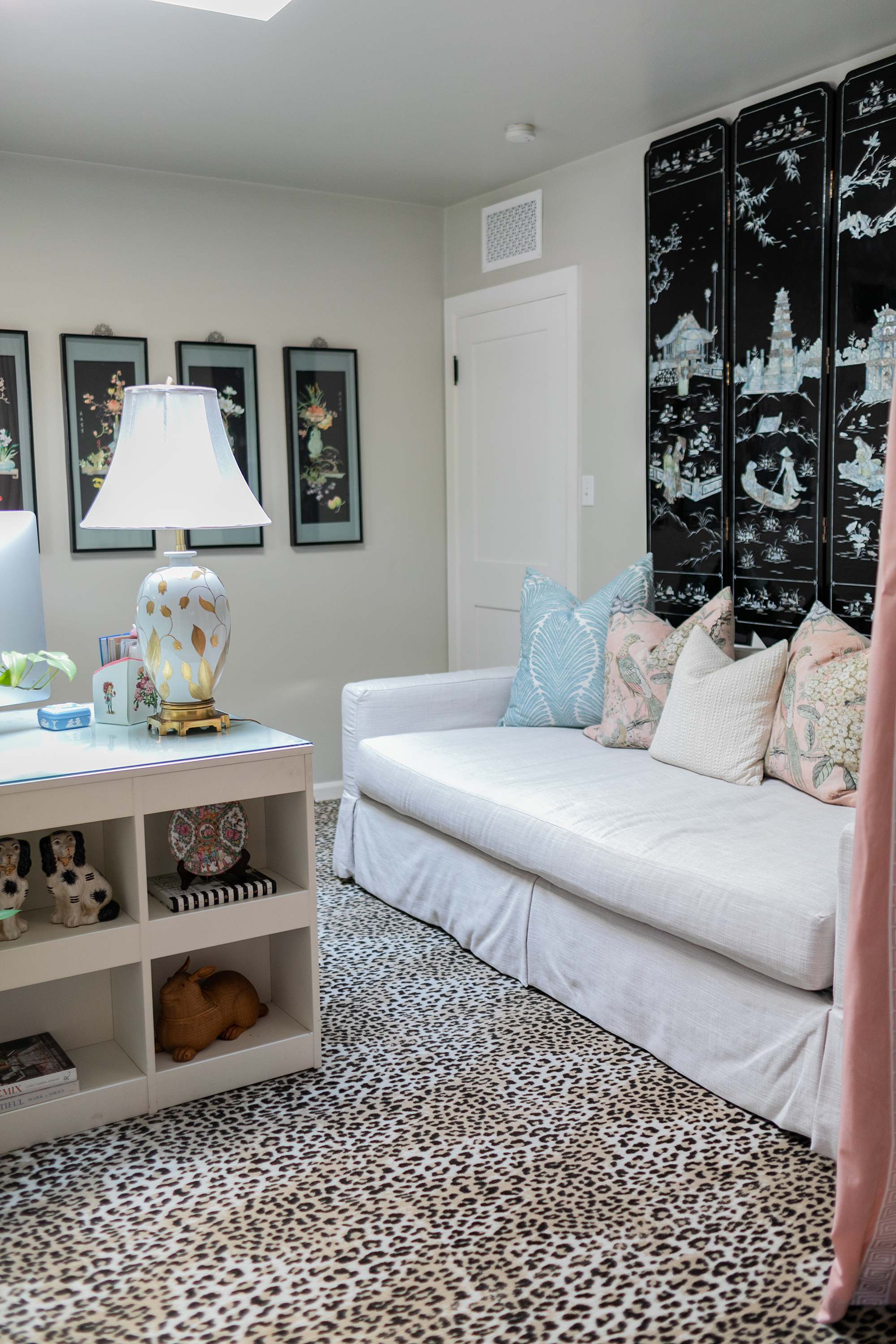 I
‘m going to blame all the changes on quarantine and sitting at home looking at my walls, ha! I started with swapping out the velvet pleated curtains with tape trim, to then wanting a leopard wall to wall carpet installed to finding an eBay vintage oriental mother of pearl screen!

It’s been since 2018 I showed an office reveal (here). Here’s a reminder and this post goes back to all the years before.

The most recent photo I have of the before – there was a PB jute rug on the painted concrete. 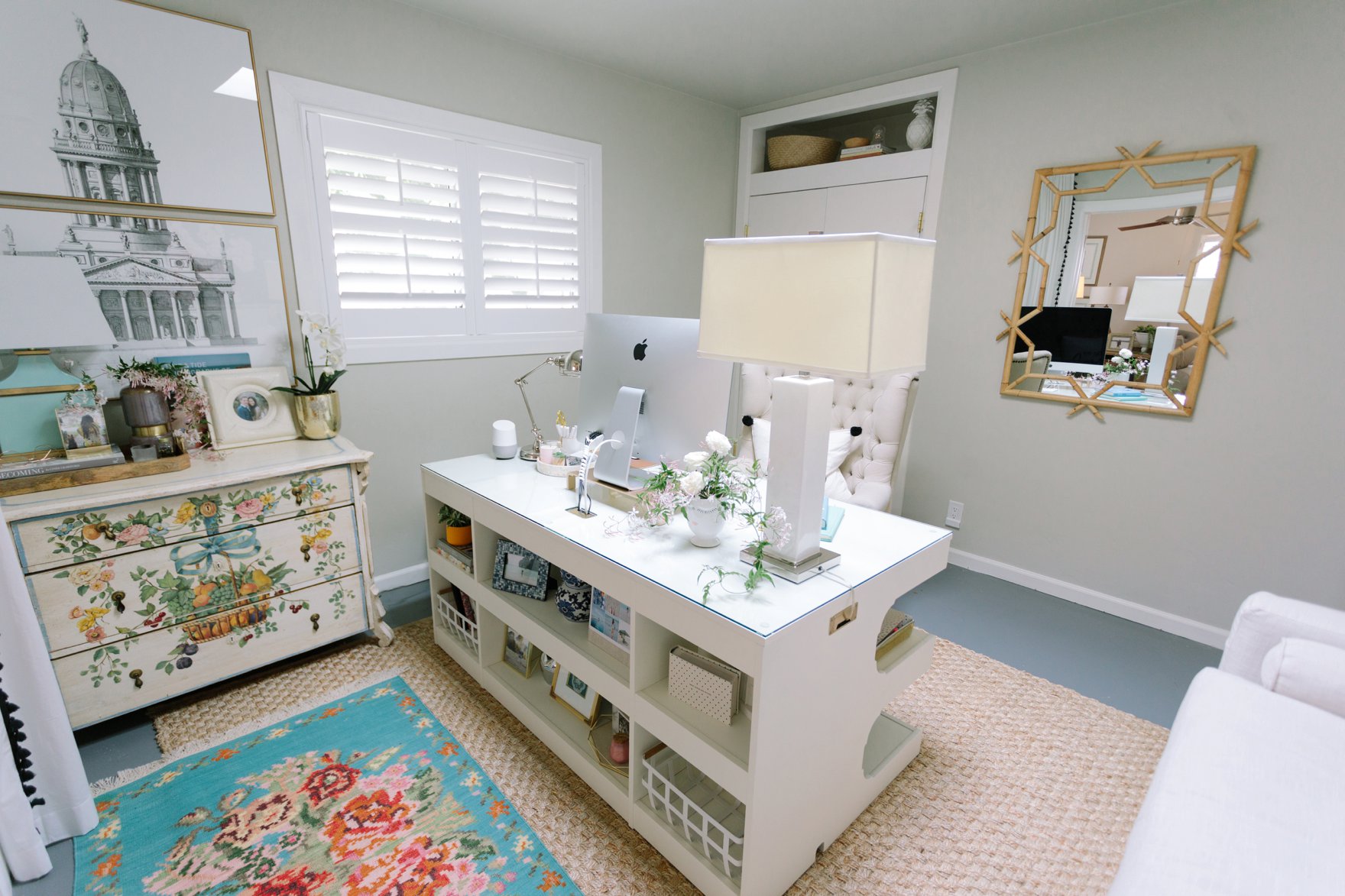 Here are the after photos of the space now! 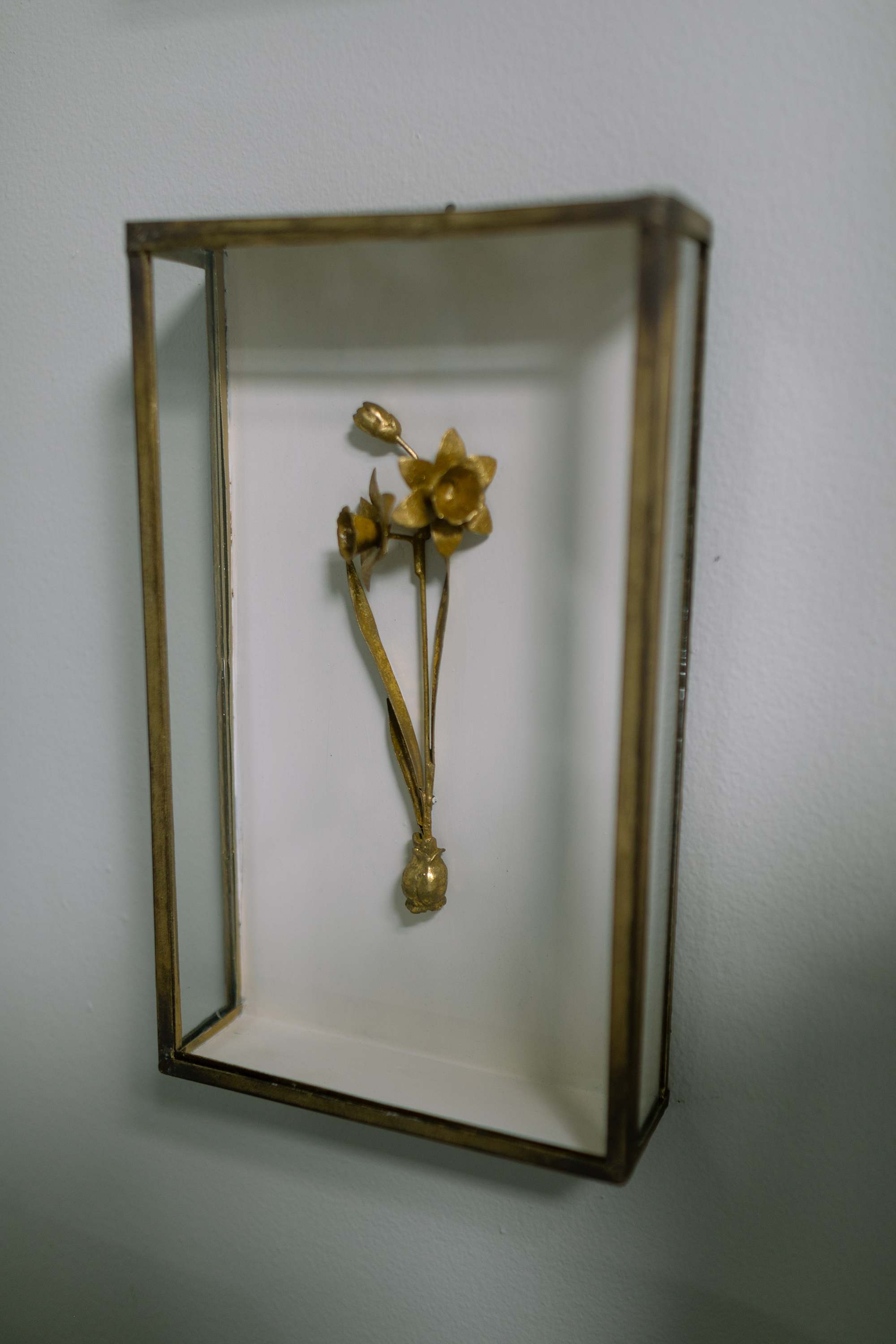 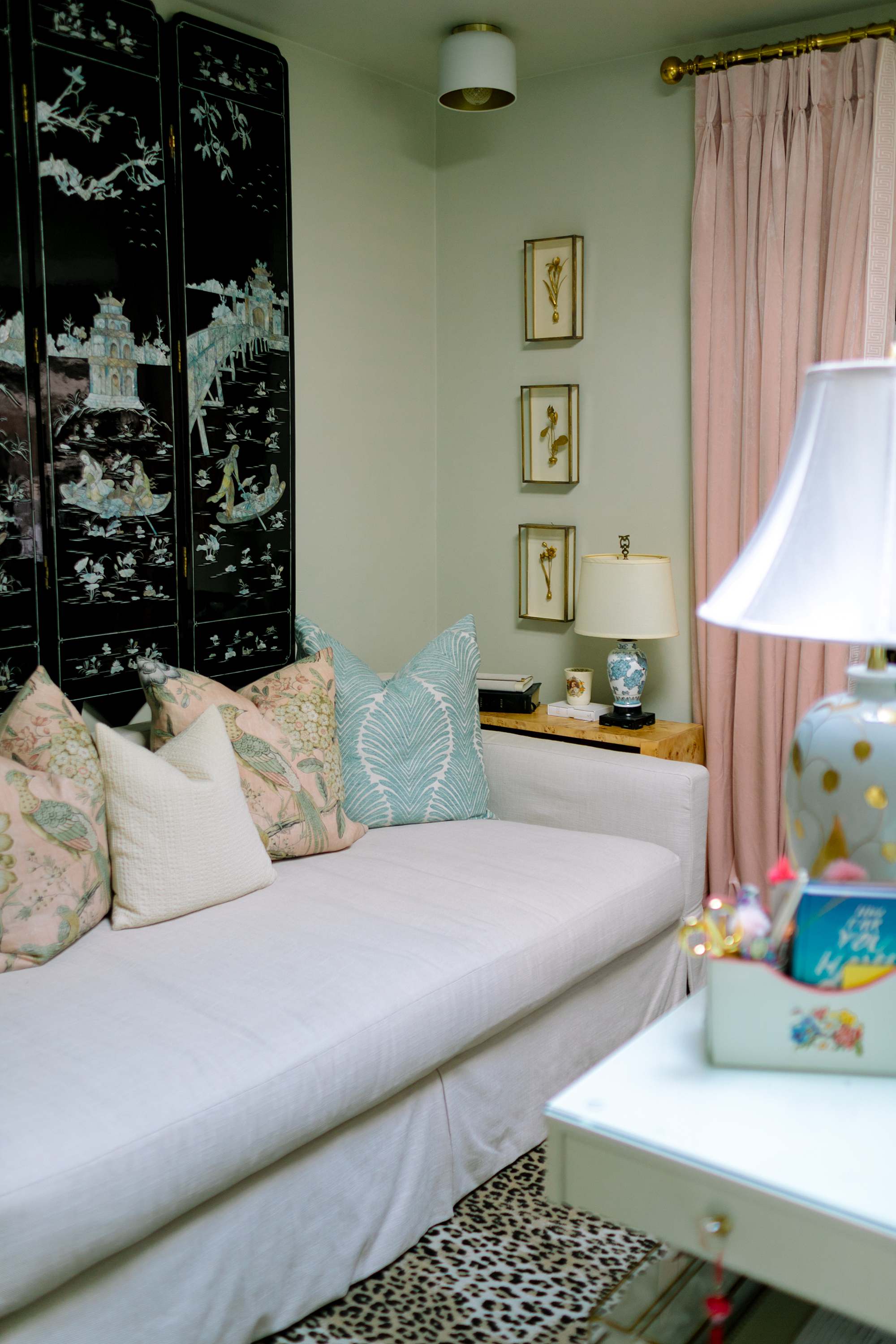 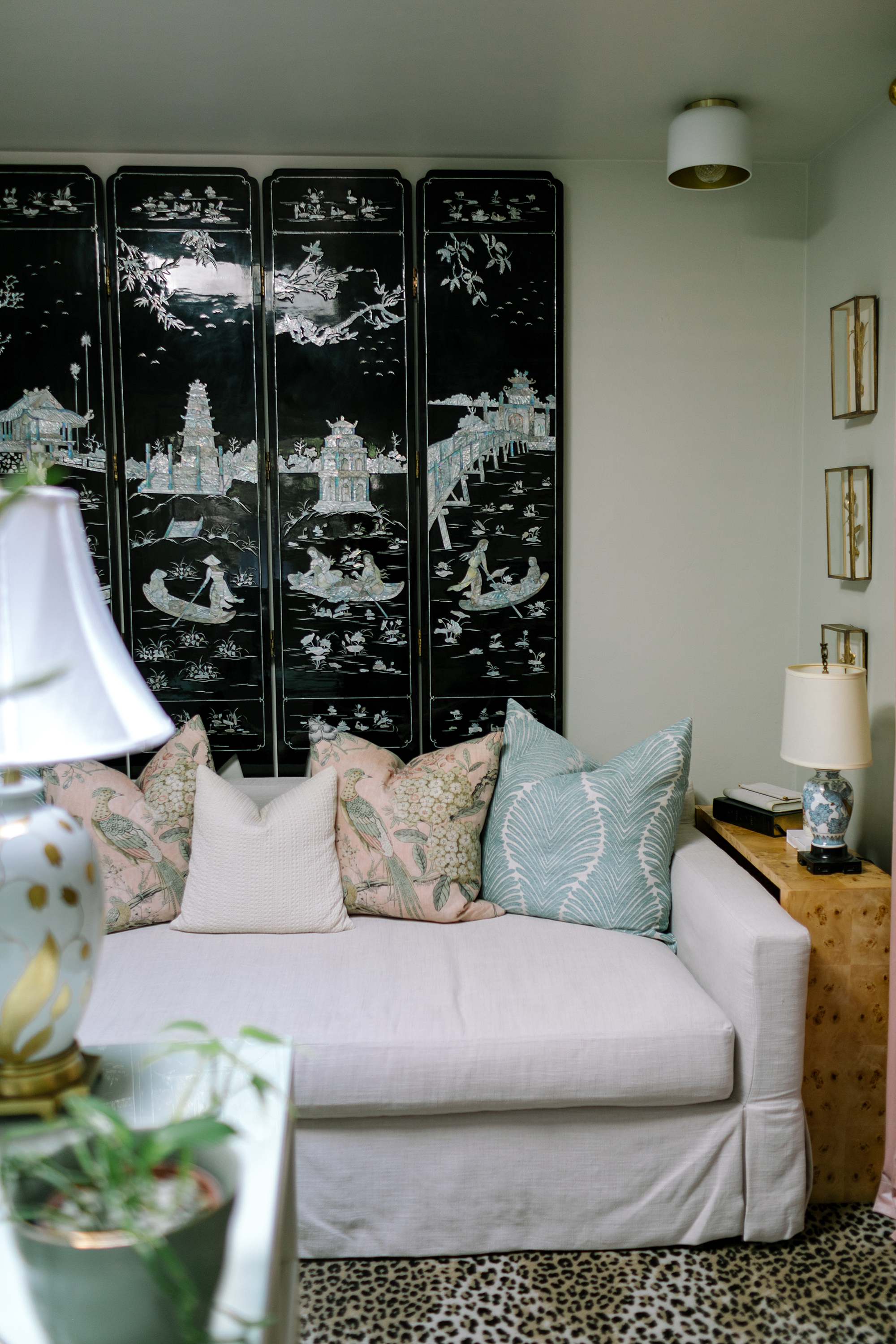 The burl wood console table finally arrived from CB2, but earlier than the anticipated September delivery date! It’s been what I’ve been waiting for so I could take photos and show you – although truth be told I’m not sure if I feel this space is done, hahahahaha ok no really, it’s complete. For now.

The pillow covers are custom from Etsy, one is Thibaut’s Villeneuve in Blush. You can type that in Etsy and find some seller I bought them from no longer has it. Here’s a link, and I love a contrast piping!  This one is double sided and um, cheaper than what I paid, but I’ll let that go. Want blue? 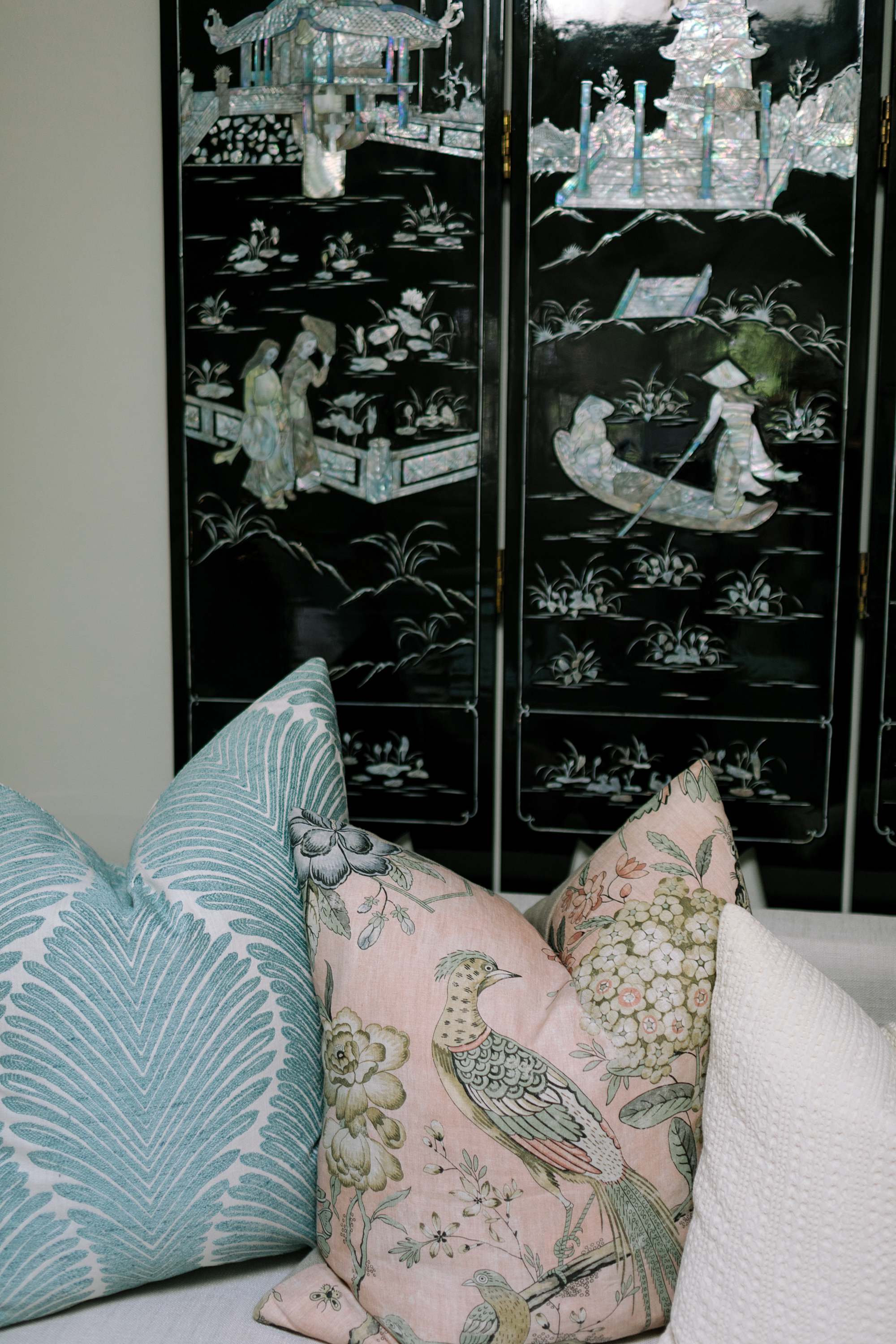 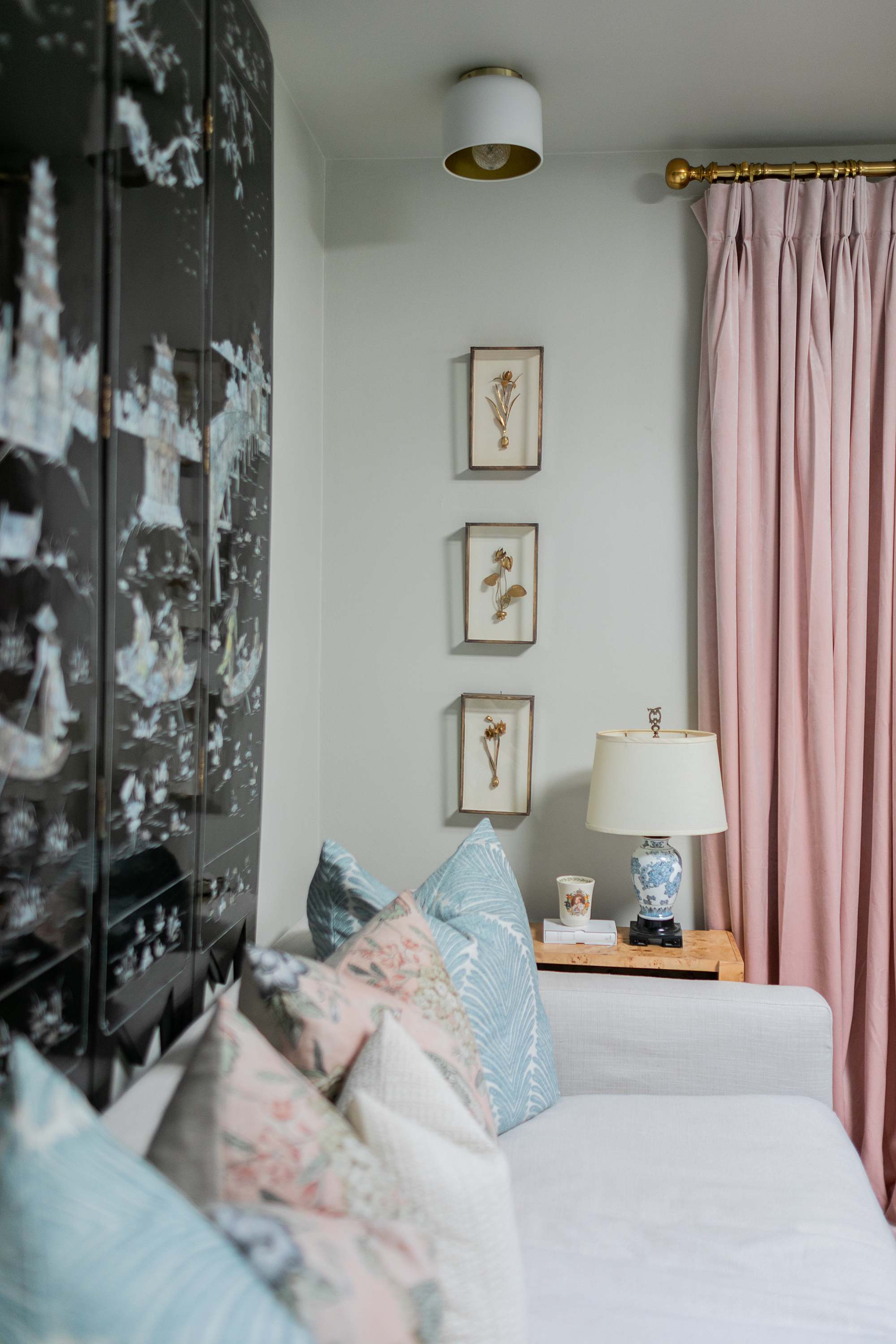 ^^ The metal florals are from Ballard Designs and were supposed to be a set of 4, I ordered all 4 last year but the last one that was on backorder kept coming as a duplicate and the same one was sent THREE TIMES! I was like ok something is tagged incorrectly, I am done. So I just returned it and let it be 3. It works just fine here!

I also heard the best way to display photos if you don’t want them all over the house is to put them all in the same spot so I decided to do that on the English painted chest I bought many years ago. This piece has been with me for almost 10 years and I realize if you just splurge and buy what you love, chances are high you won’t replace it. My dining room is a perfect example of that! 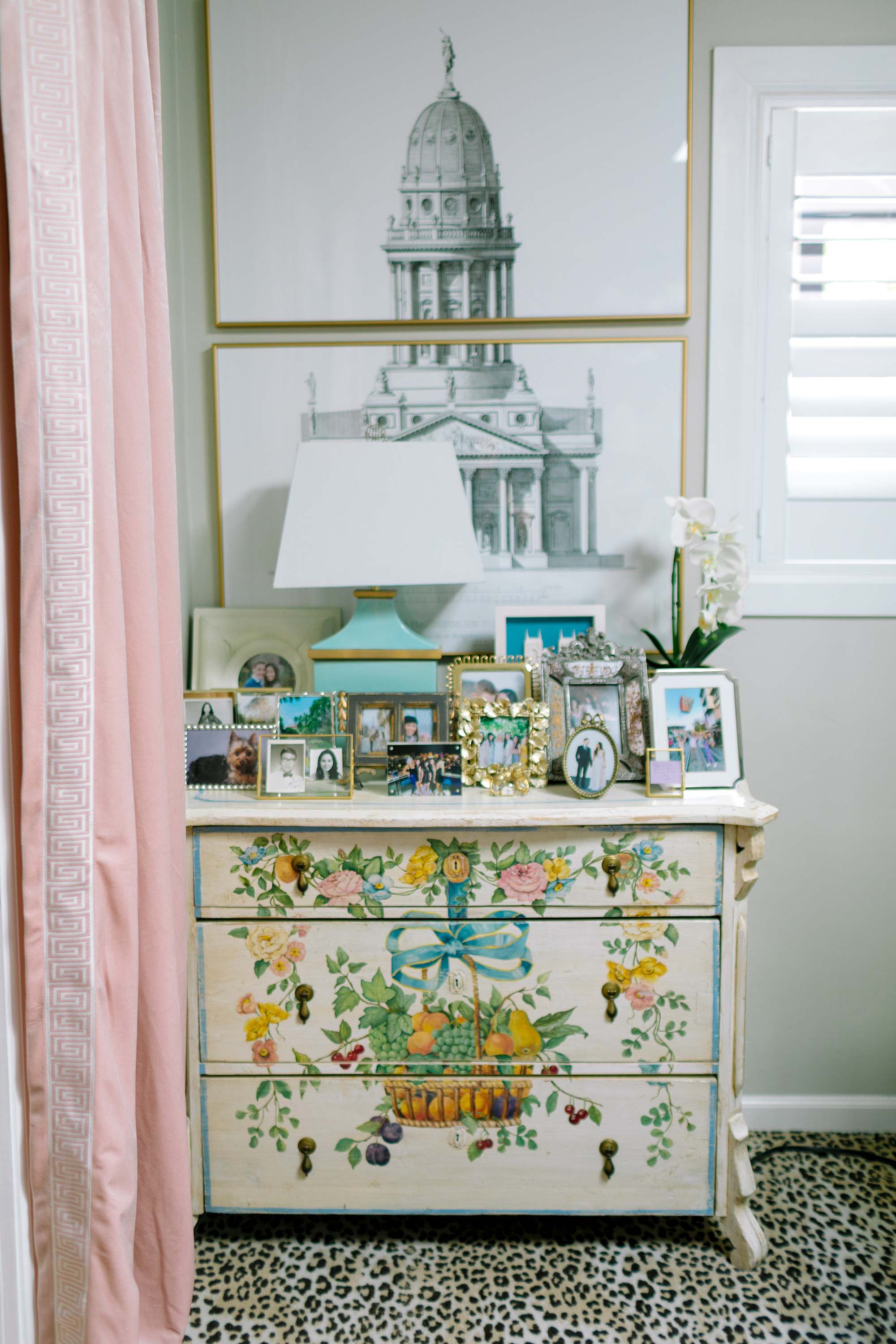 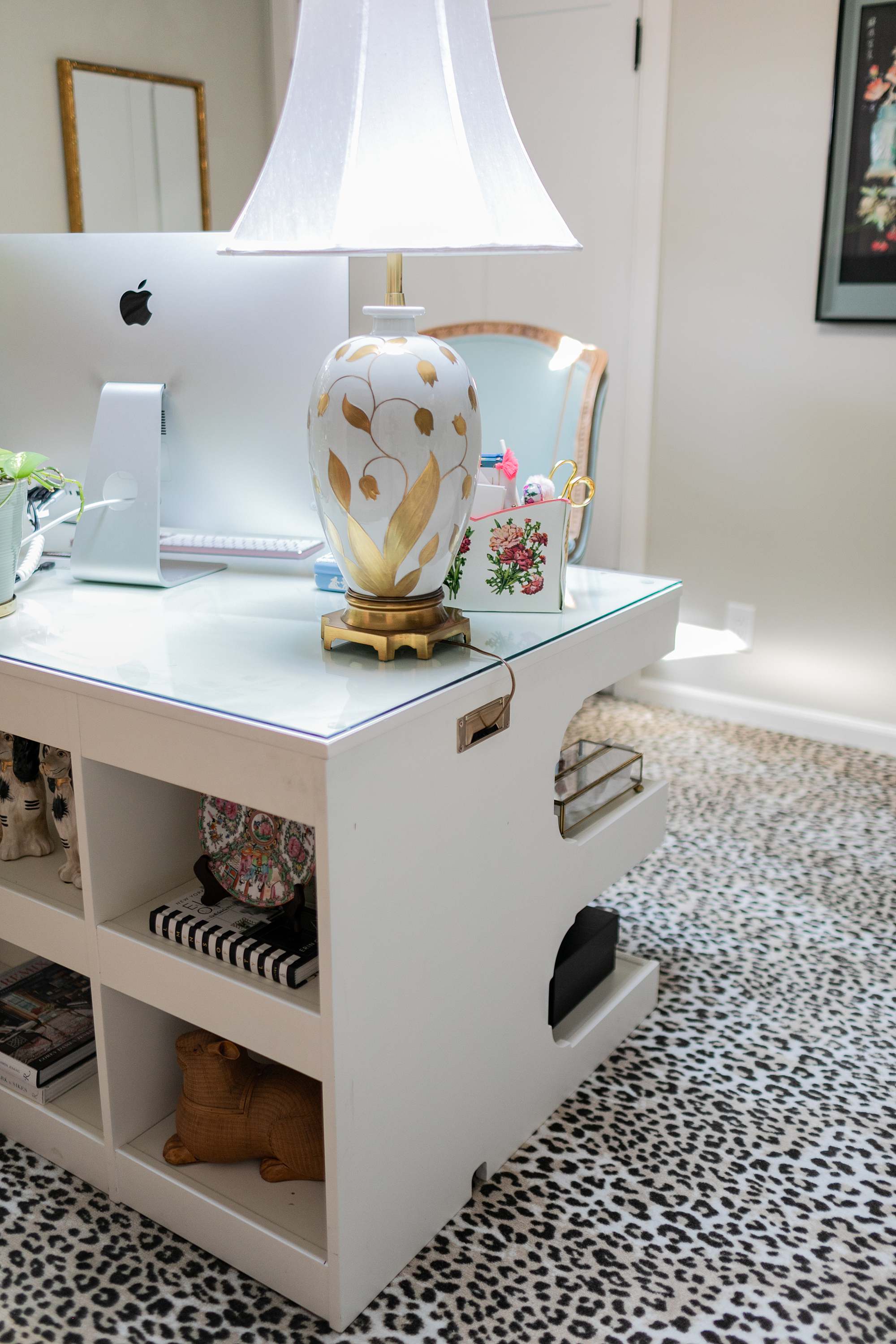 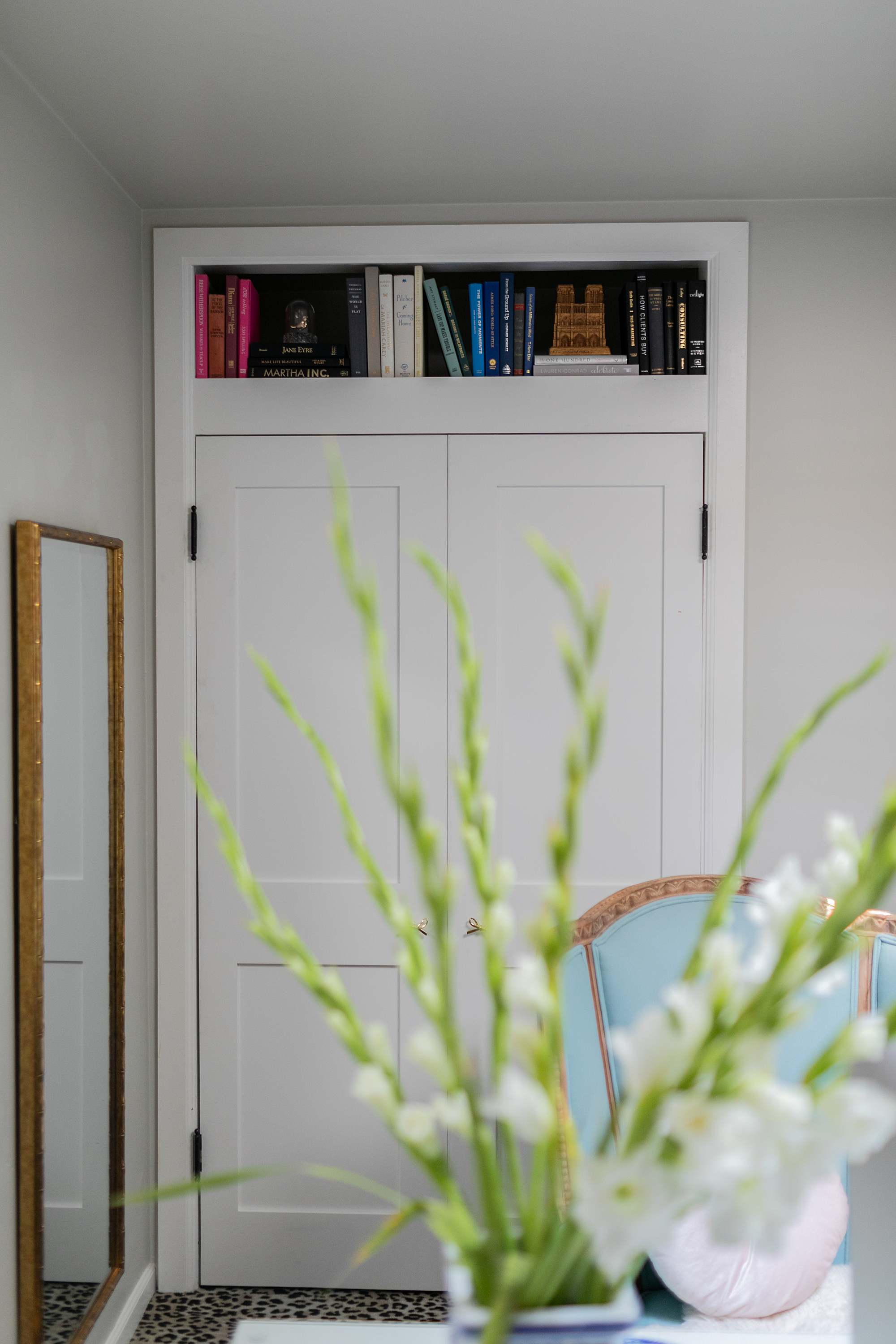 ^^I got around to styling the top of the office closet. The carpet goes into the closet too. Have you seen it? Here’s the post. I would’ve taken more photos but that would have meant I had to tidy it up and well, not everything is in photoshoot shape. :)

The set of four Asian flowers and fruit panels were a gift from a friend. They belonged to her late grandmother and I felt so special to be gifted them! What a treasure, I have her information on the back and the story of her grandparents – her grandfather spent time in Japan in the service and her grandmother was influenced by oriental furniture. So unique, thanks Shayla!

Funny enough a week later I was like I need to give Shayla this French bookkeepers shelf I had bought from Wisteria (but I had a hard time letting it go) and I had been to her house to pick up these panels so I knew her farmhouse style so I text her and asked if she wanted it and she came to pick it up and was also able to see the panels on the wall. It made me feel so great giving her that bookcase, it was like a nice trade! 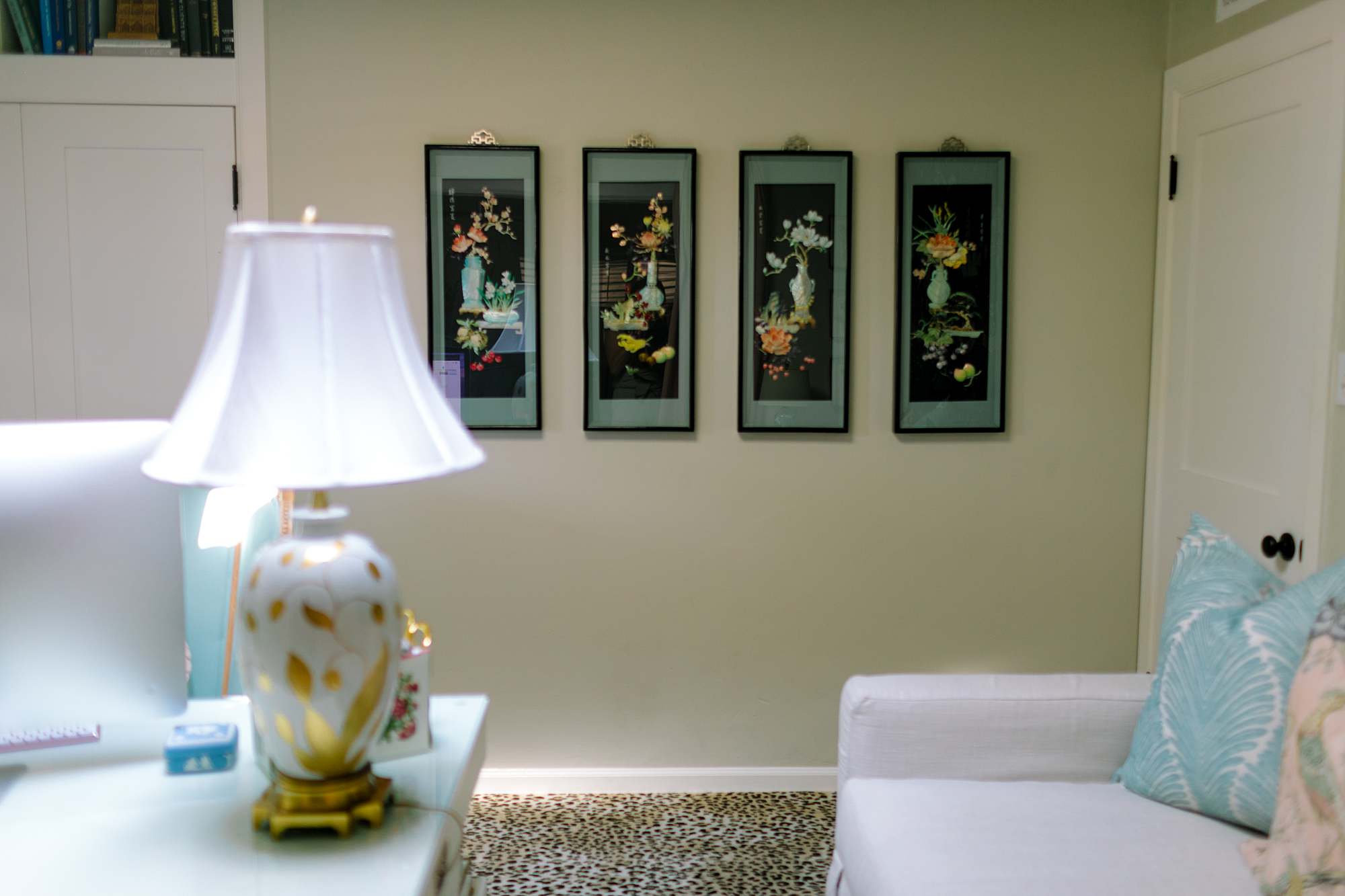 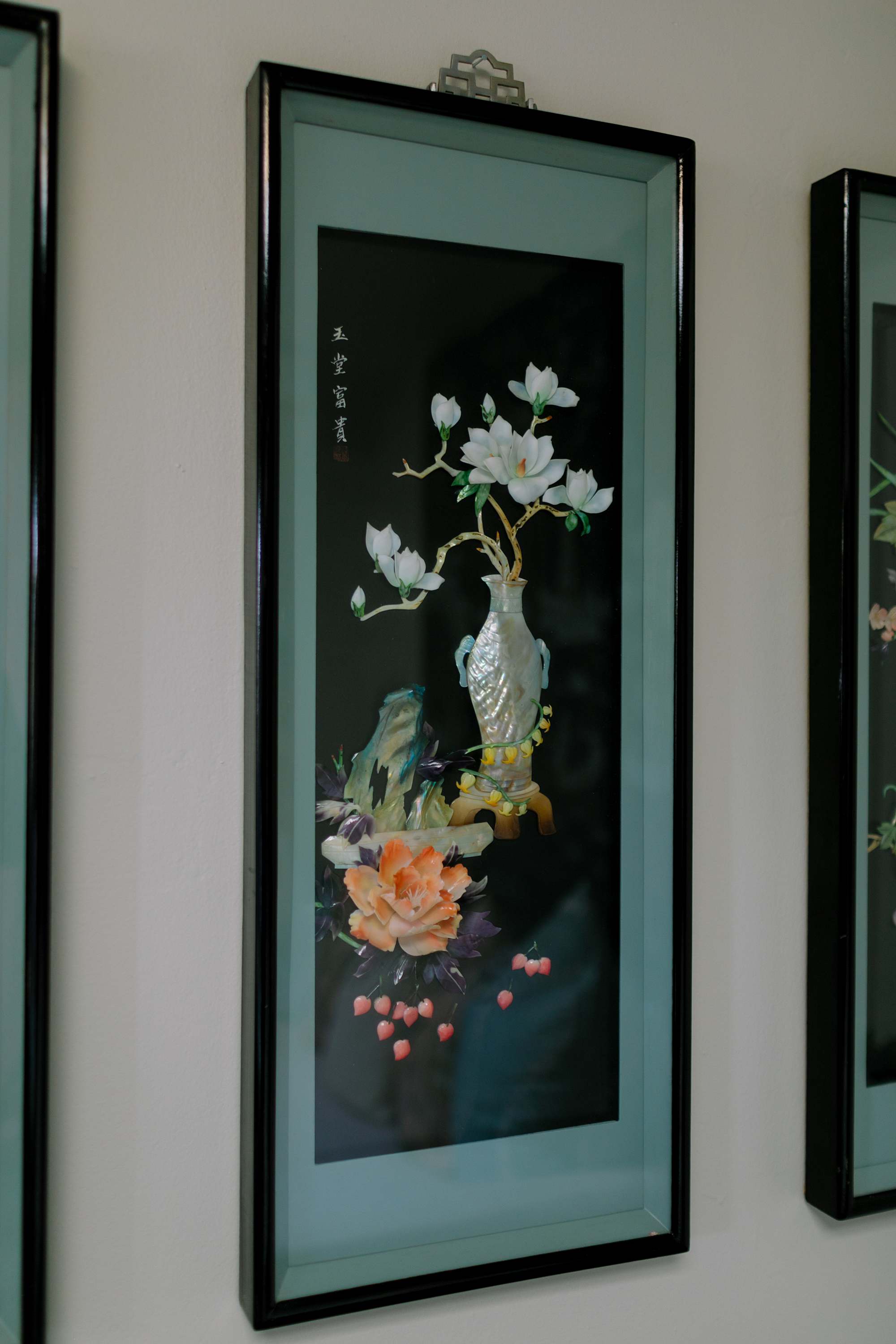 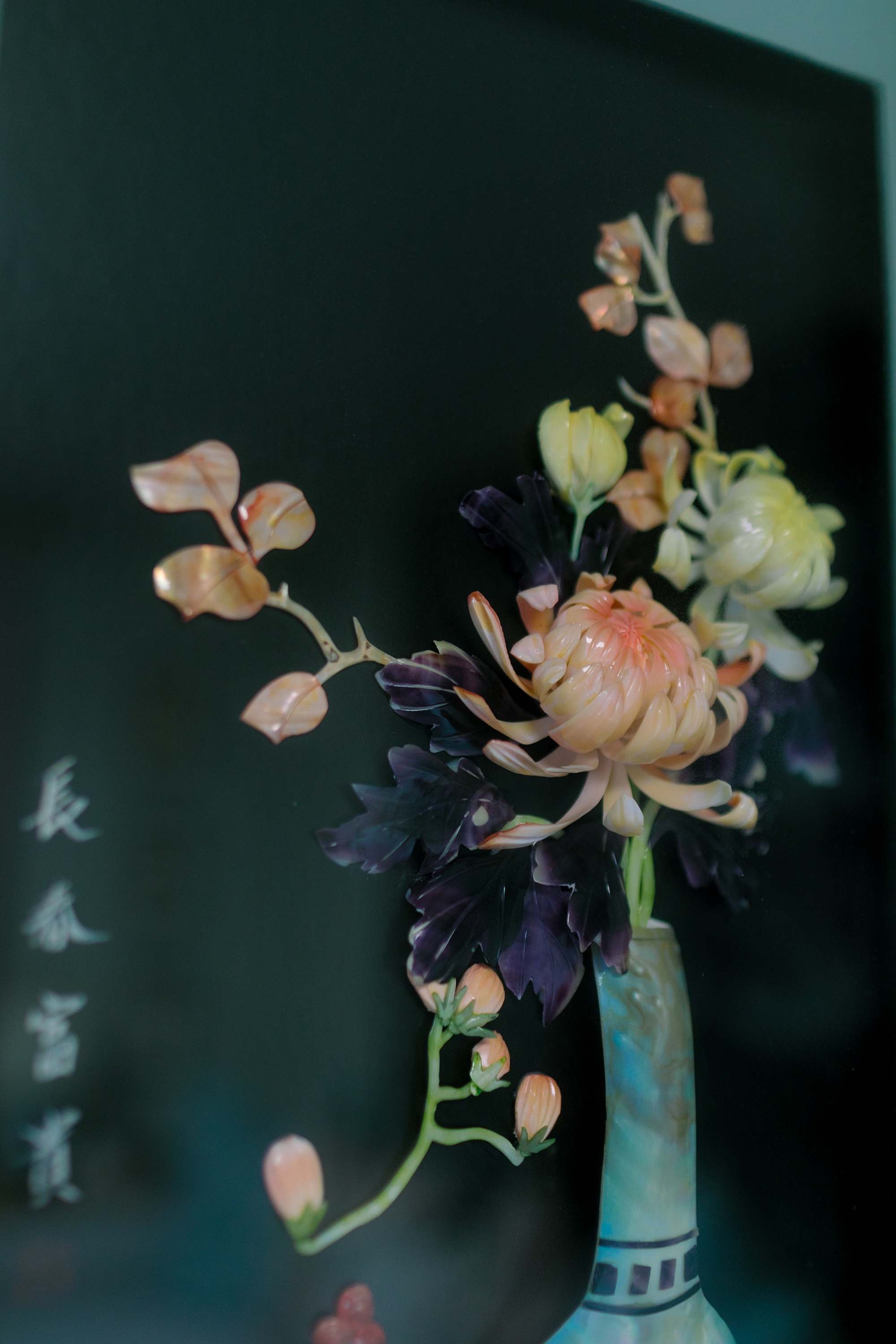 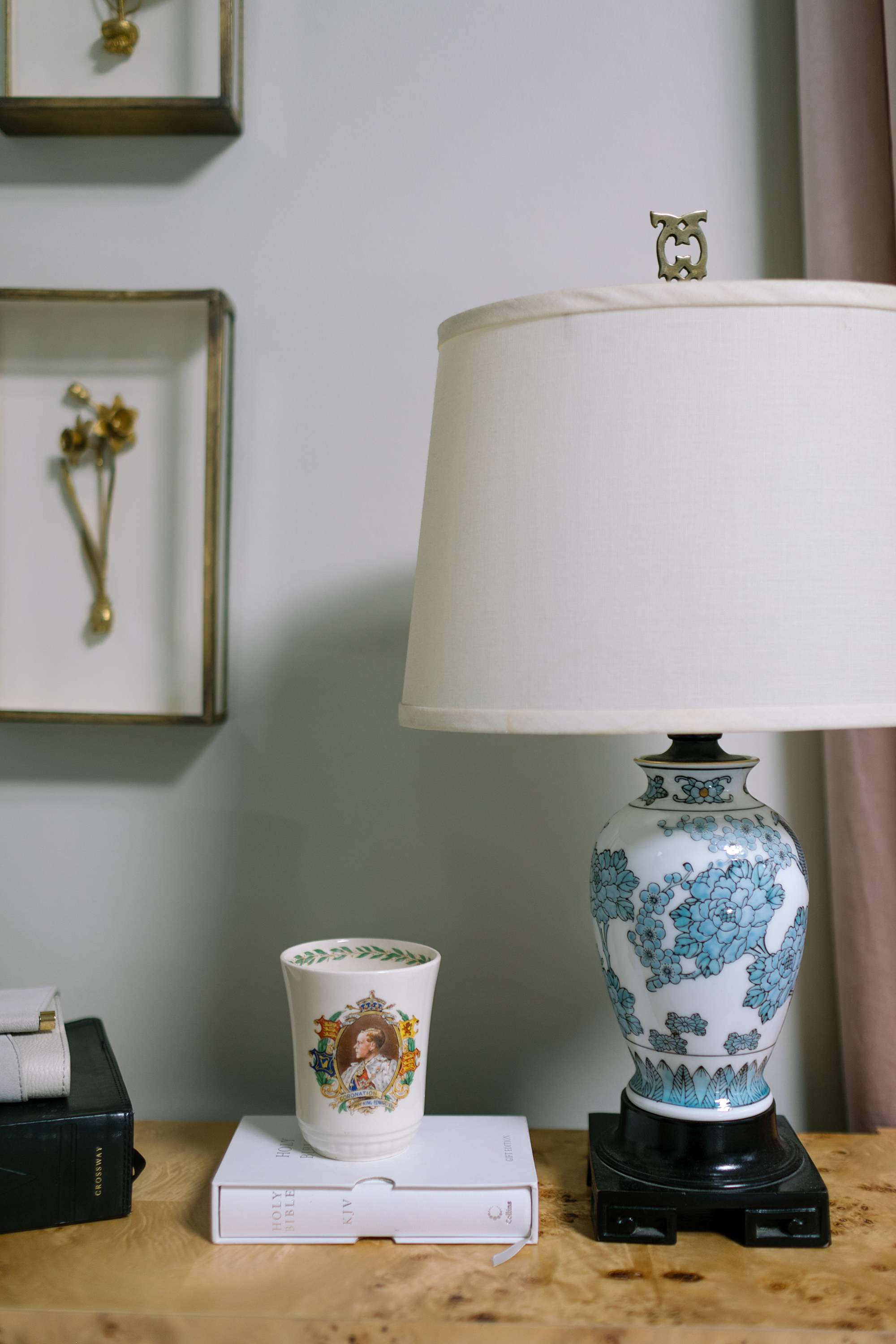 ^^ Have you watched The Crown on Netflix? Or if you know the British royalty, that is Prince Edward and a cup from his coronation! It’s a gift from my friend Pammy! He was the king who gave up his crown to marry the American and Queen Elizabeth’s dad had to become king instead and then she had to become Queen. What a unique piece to own, I collect British royalty because well, we know who I was named after, both of them ;)

The white bible is something I picked up at the Westminster Abbey gift shop the last time I was in London. I am overdue for a visit. 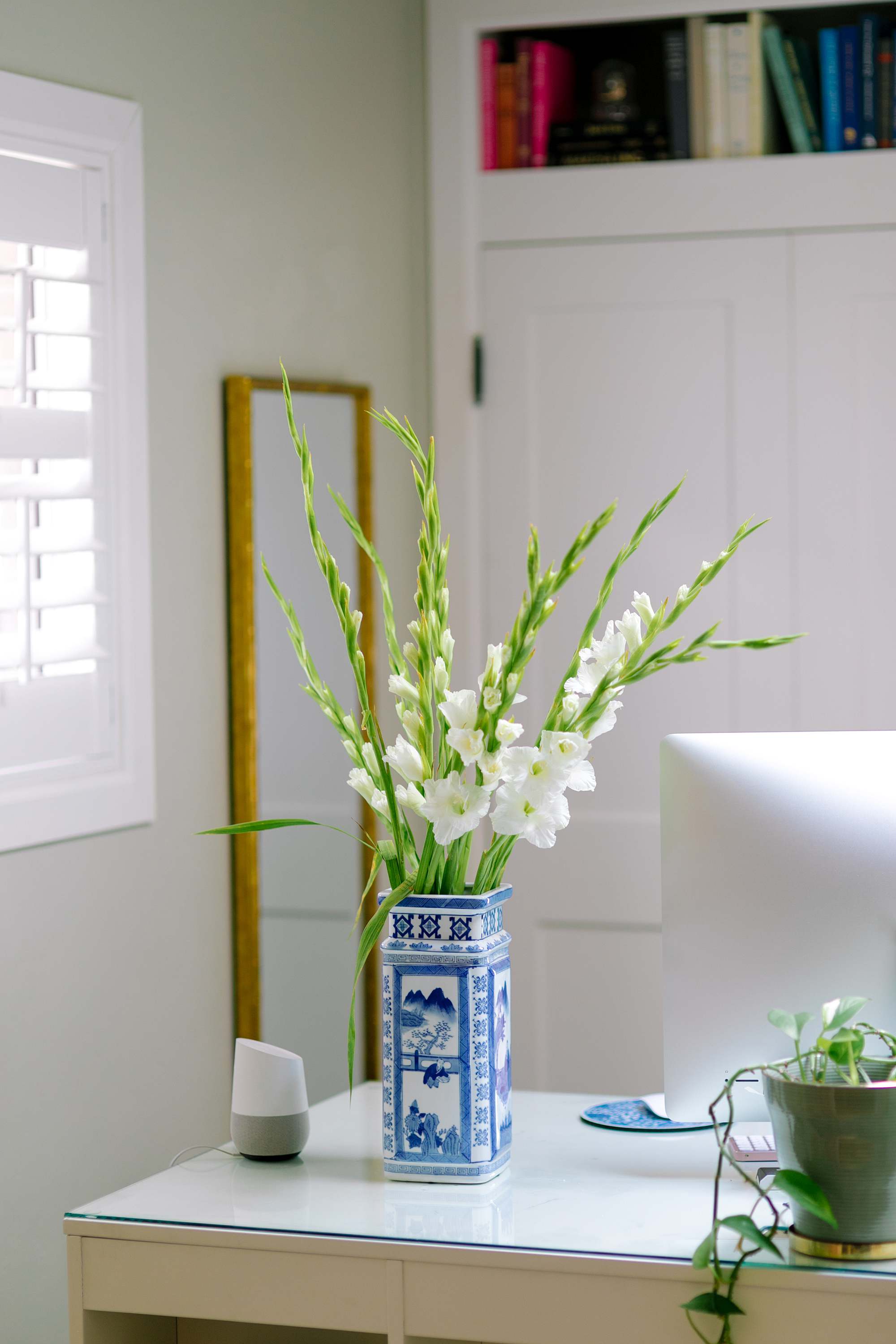 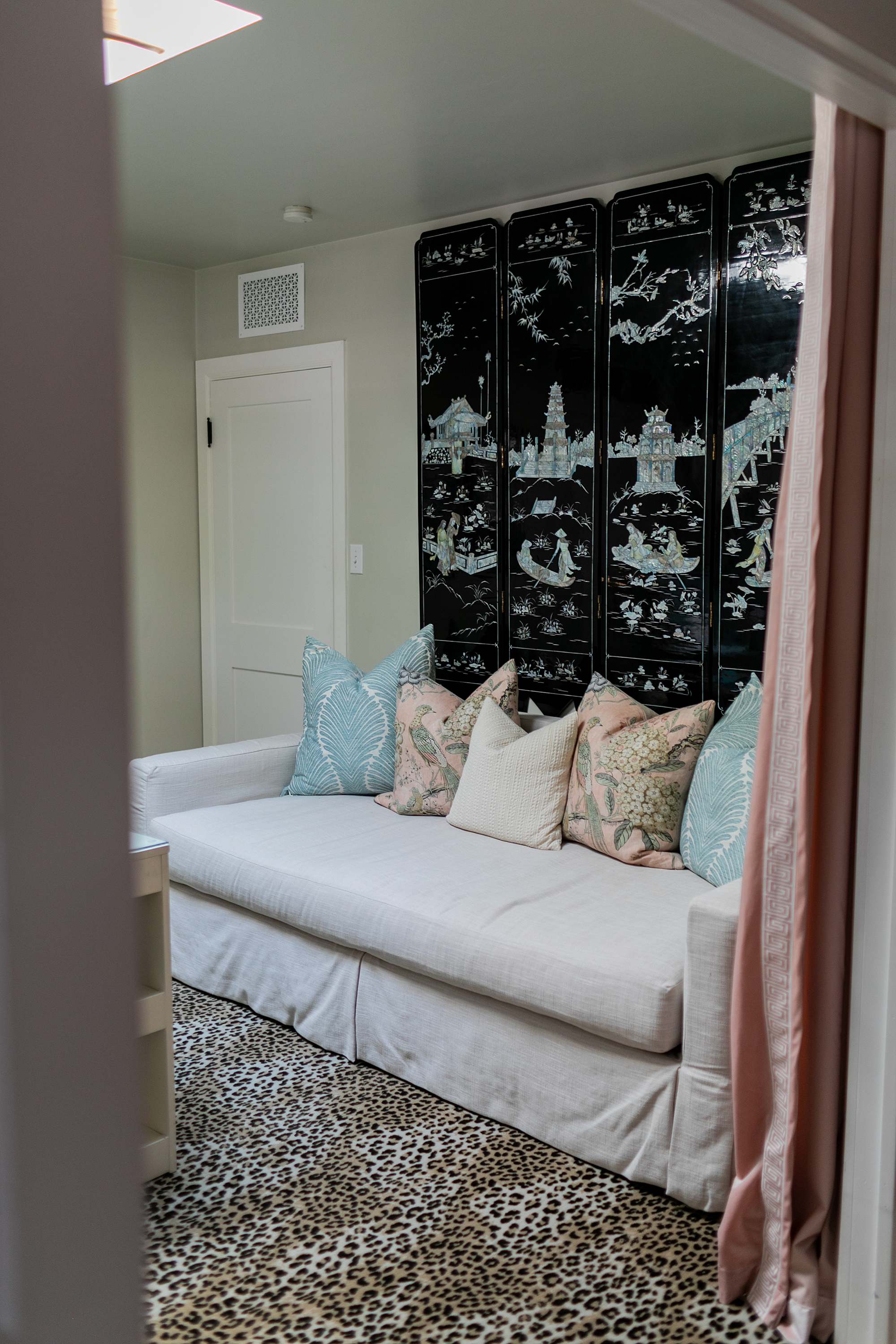 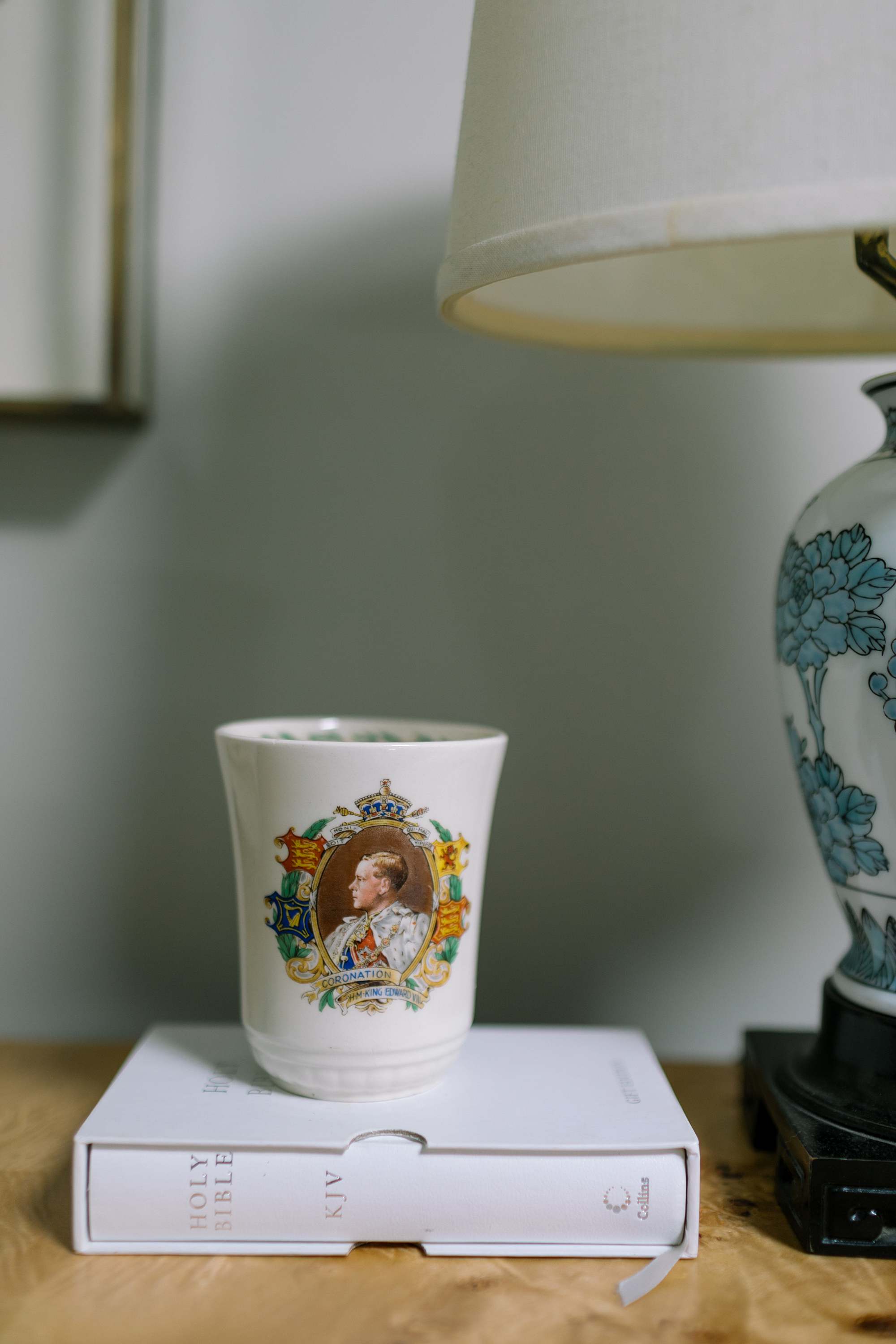 And that’s a glimpse of my new office space! Lamps are vintage finds and the ceiling flush mount light is CB2.

Diana Elizabeth almost wallpapered her office…but this before the panel went up but she debated colors and textures and decided this was best and also better – and the leopard wool carpet pretty much is like wallpaper but on the ground!