In addition to acting as project manager for the backyard renovation, I thought I’d share some progression and other things around here.

To recap, here’s no trees, with the sprinklers going in without the bushes against the back wall — 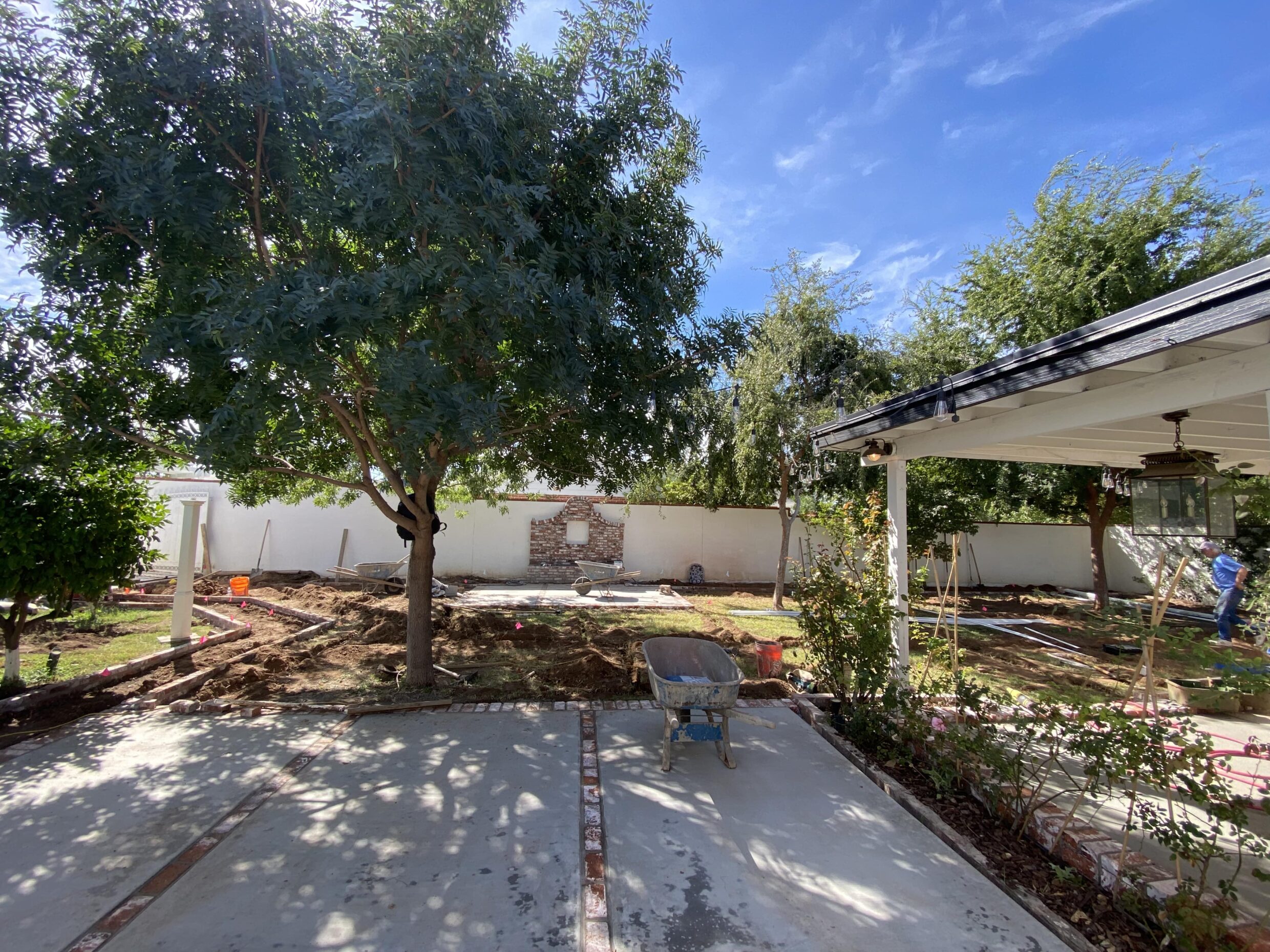 And after Whitfill arrived and delivered the 11 ficus bushes along the wall. I spaced them 5 feet on the left side and 5.5 feet on the right side. One of them wasn’t placed correctly due to a sprinkler pipe so I went out to ask and they showed me why and I explained it was an unused old pipe they could smash so they did and moved it over! 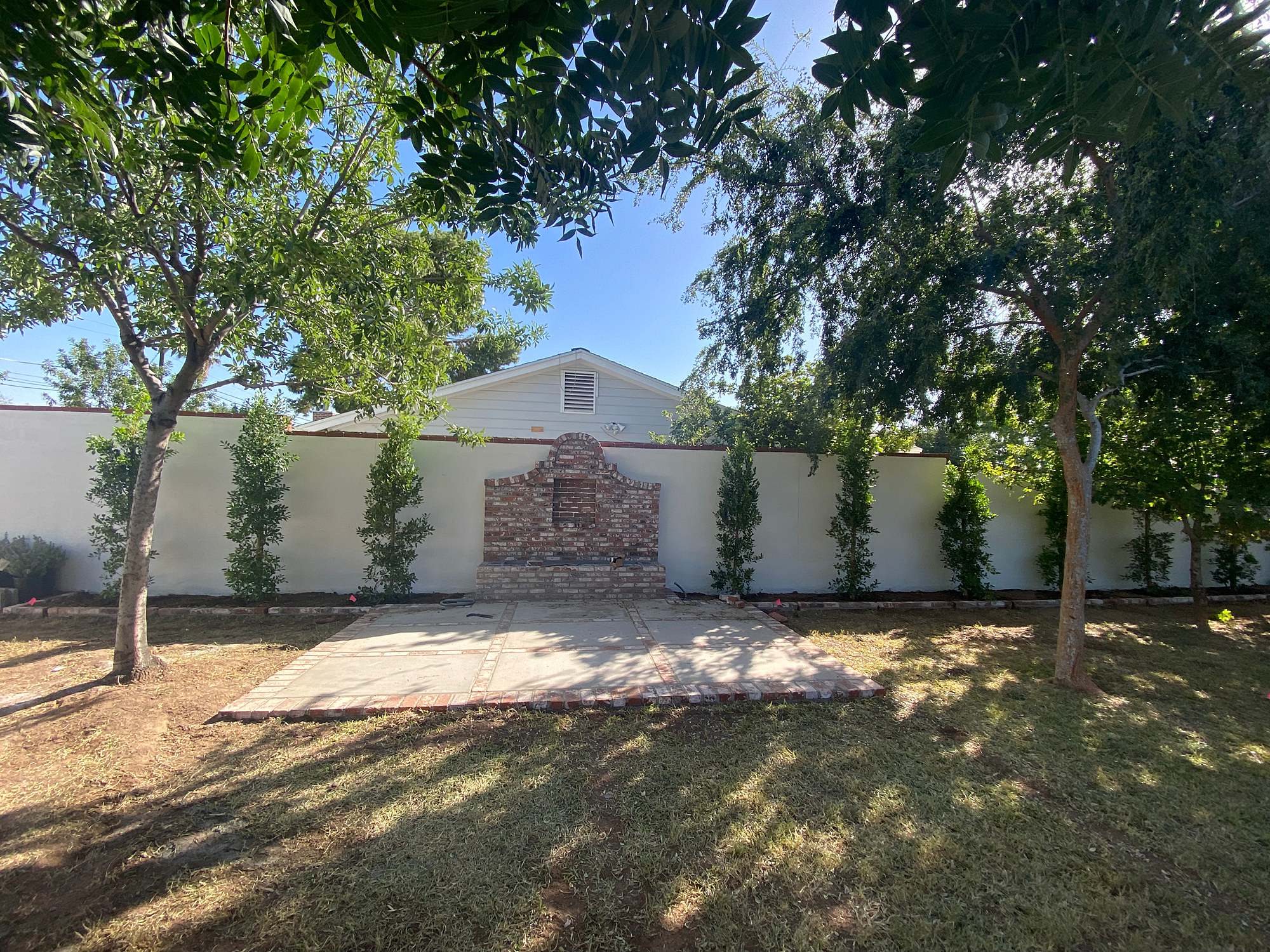 The irony that the seating area lines up with my neighbor’s vent LOL. I guess that works out even better because it might have drove me nuts if it didn’t! Look at those pretty focus bushes. Benjamin has been begging for them and well, he got them. I just told him he can’t say I don’t give him anything he asks for – yes he seriously pouts around and says this when he doesn’t get his way LOL. He has definitely gotten his way a handful of times so don’t believe him.

A blue and white basin bin will go in there. I just drilled a hole into it using a diamond cut something I found on YouTube. We didn’t want water to sit in there because – mosquitoes.

Below you might see the oak tree, it’s small and crosses with one of the ficus bushes if you look carefully. We had to remove it. I was all for it until I saw its branches on the floor when Benjamin began cutting and it hurt my heart a little. We aren’t in a tree shortage and thankfully we have nurseries that continue to plant trees and LOTS of people buying them every day, trust me, I pretty much live at the nursery. Everything returns back into the Earth like us, but sometimes it can be a little sad! Other times when the tree is invasive like a Sissoo (don’t plant those, the roots will ruin everything around it, pipes and concrete) then you’re like BYYYYYEEEEE. 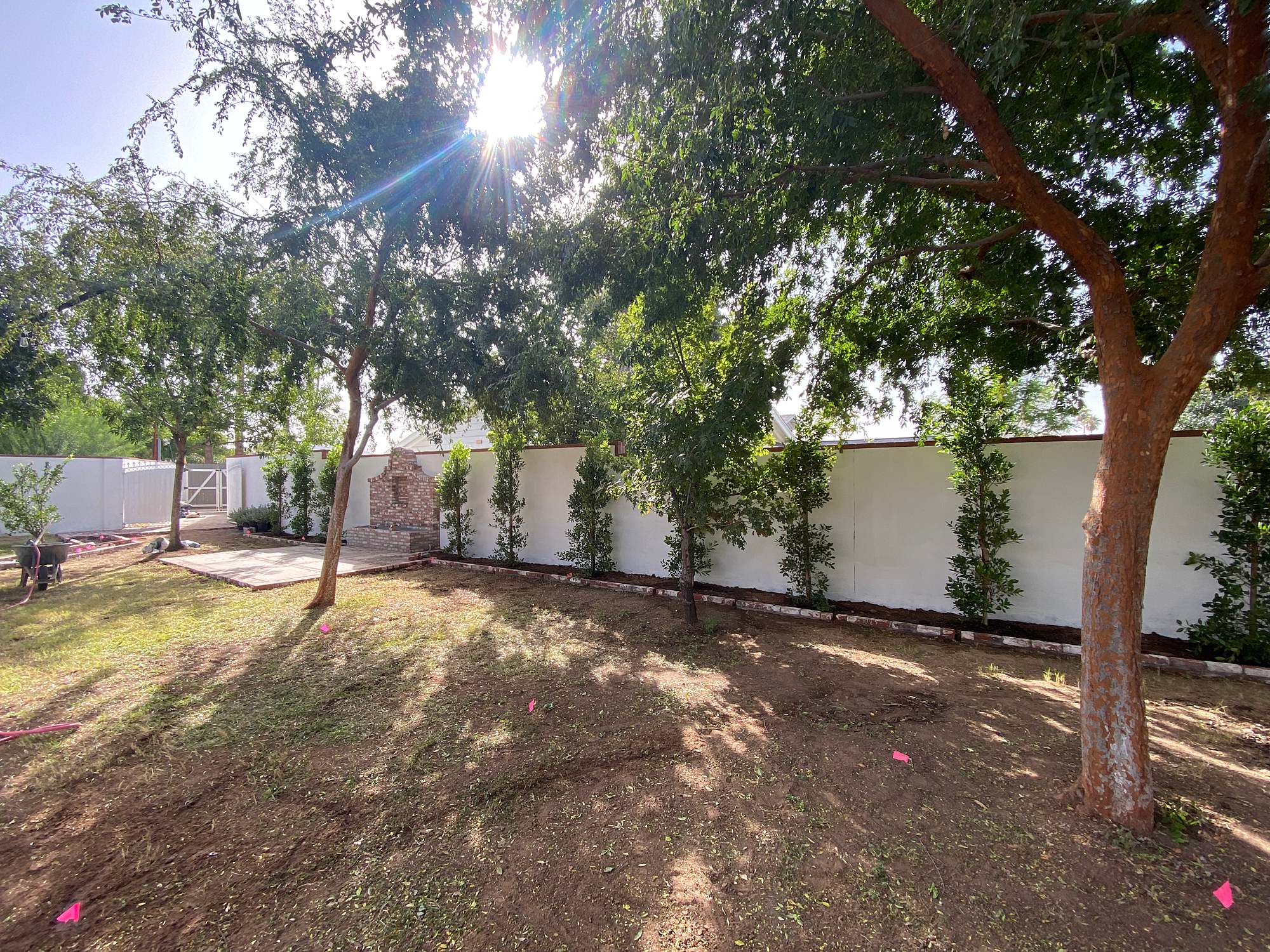 Here’s the orchard area, it seems so fun to call it that because it used to be the garden area with beds if you remember. See this post. By the time this posts, I will have fencing up by Hill Farm Design who also built our open air garage. 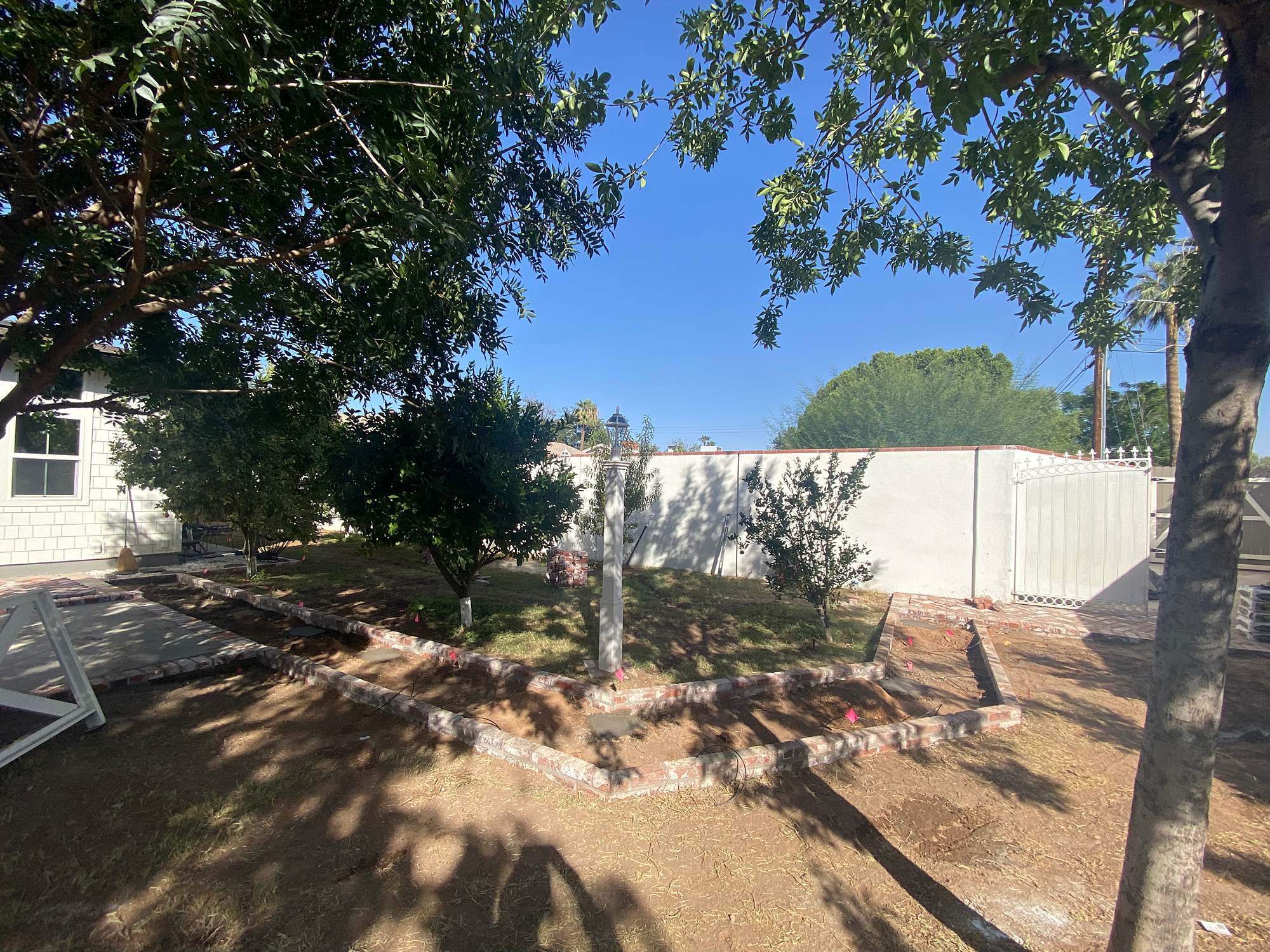 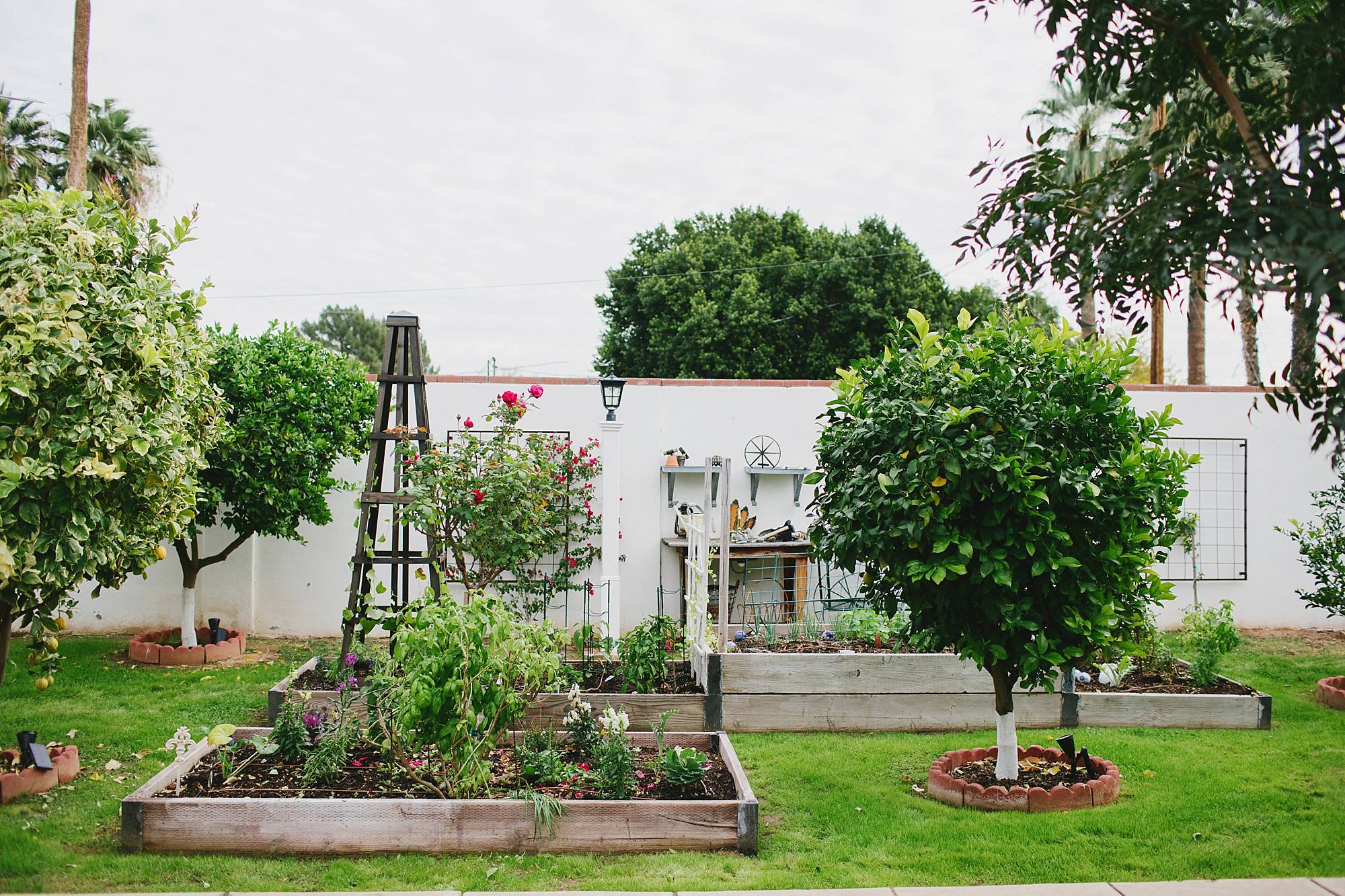 ^^ Thankful to my friend Jill Green who also helps with trimming and she had recommended I get rid of this area and make it just orchard and make my kitchen garden just what I need to maintain. What a life changer!

The patio is getting brick – just as Benjamin has wanted over the years (again, he’s getting his want) and it’s looking nice! It’s been a bit challenging for the guys with the herringbone pattern but we’re getting there and I’m glad it’s all slowly coming to an end and then we get seed and the magic happens – also the leaves will all begin to drop here for that dreamy winter sun. 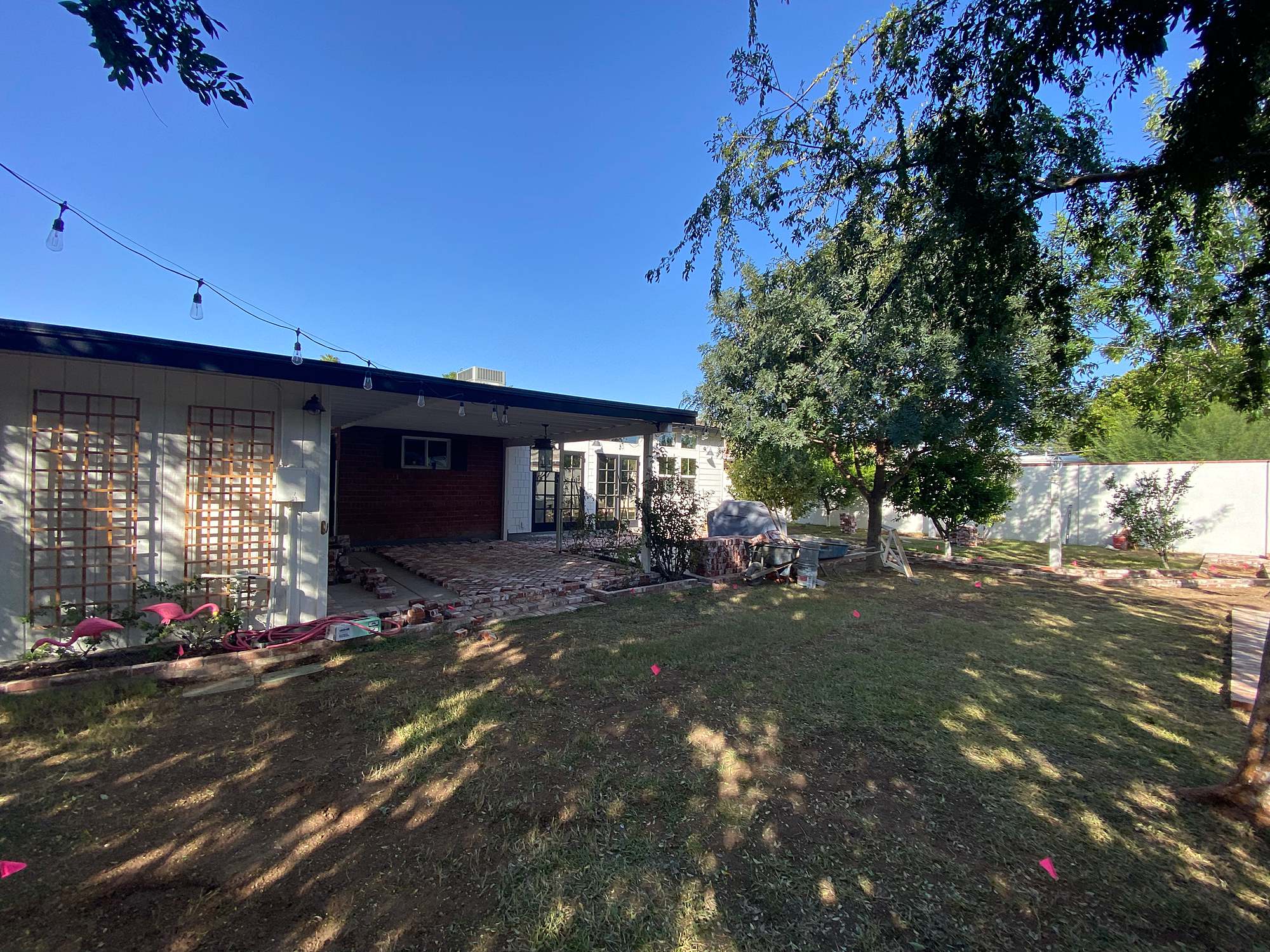 And now onto other things, it’s Breast Cancer awareness month – I worked on a fun reels campaign with Carpet One they have 6 doormats and 25% of proceeds go toward the Breast Cancer Foundation Research. They have done this for a while and have given almost 1 million! 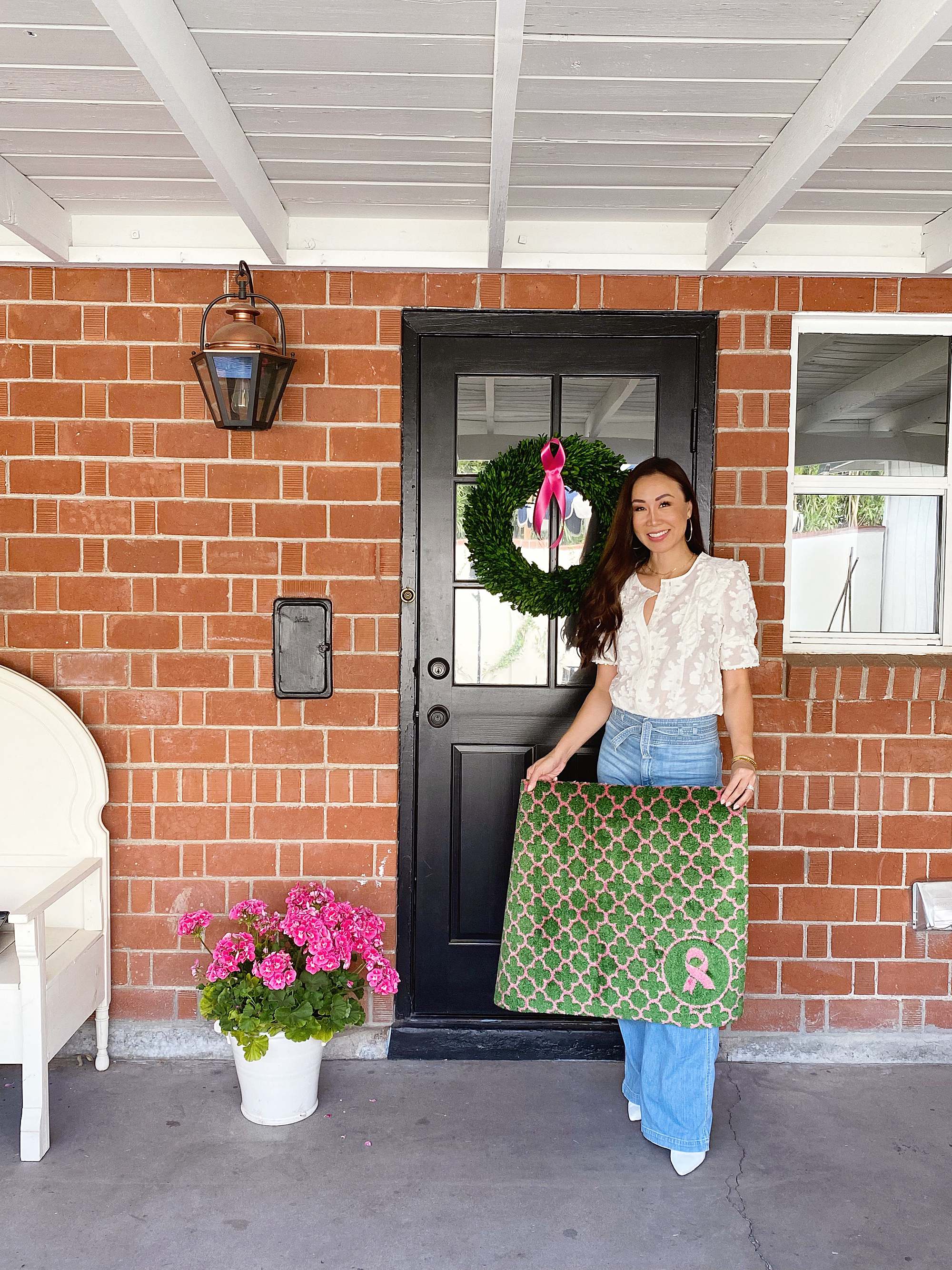 The poppy teak chairs but I call them rose chairs were looking worn from the sun so I needed to refresh them with some teak cleaner. It kind of moisturized it but I think I’ll have to try something else next year. 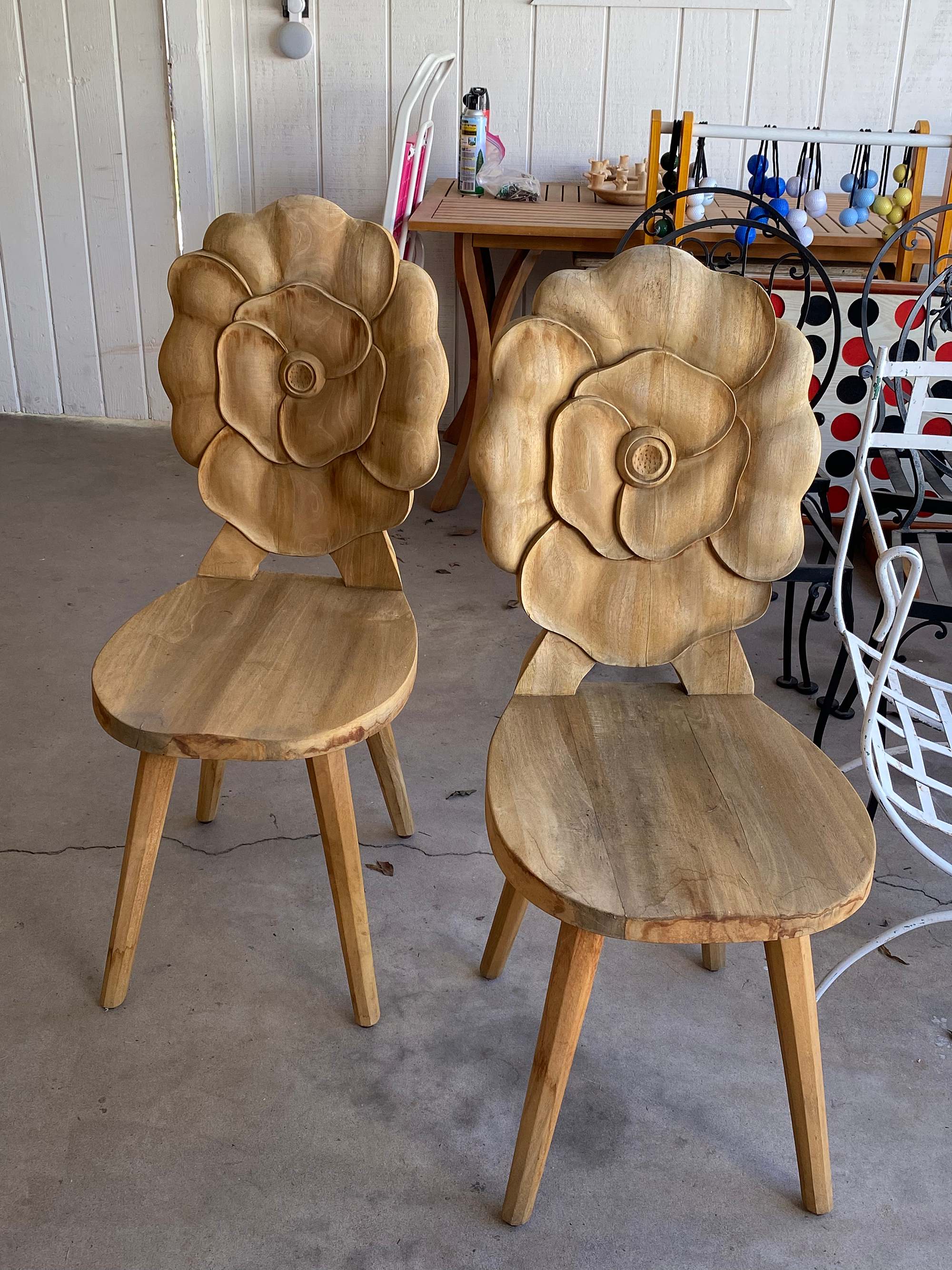 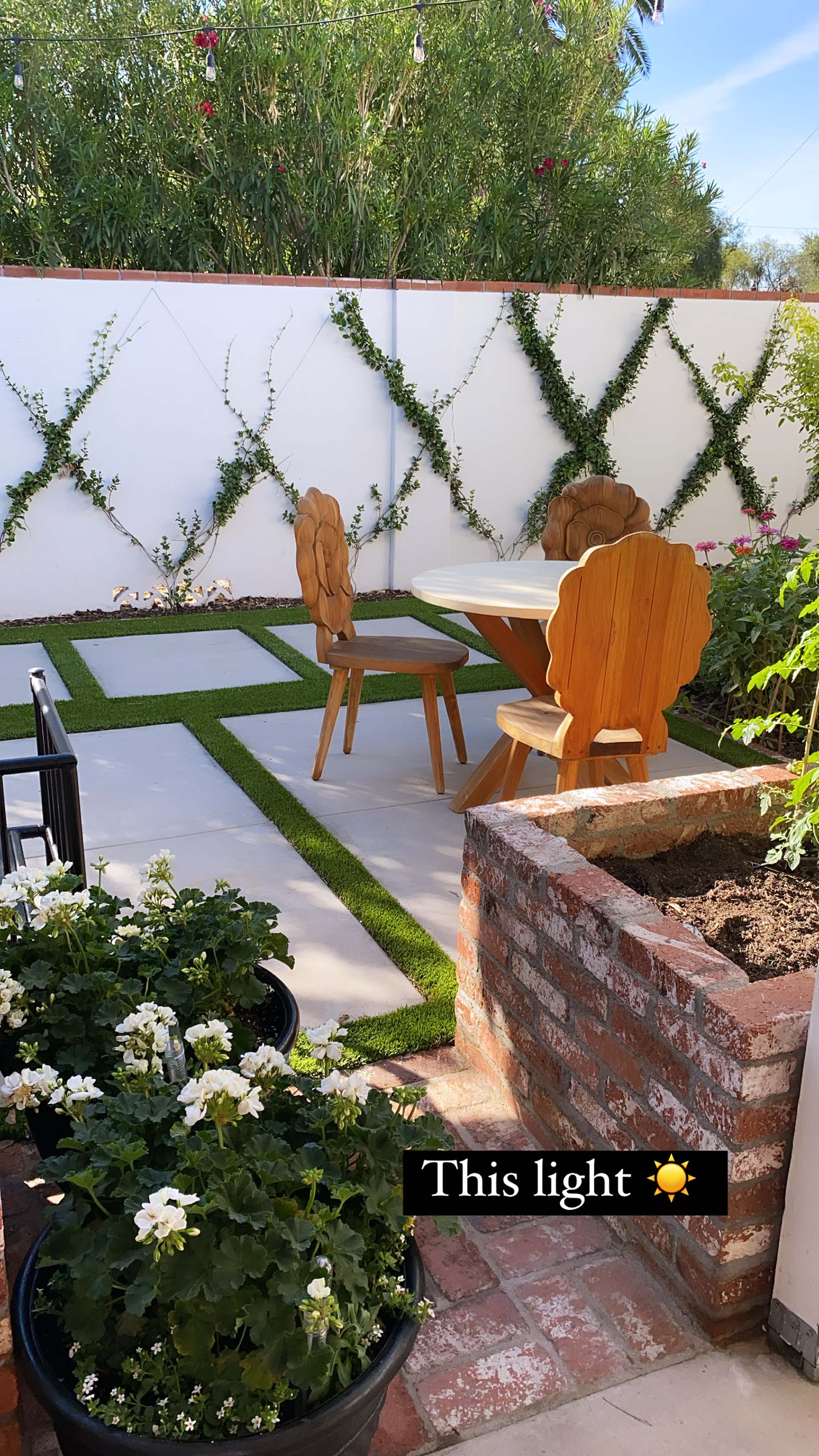 But they do look a bit better right? And those black planters I moved to the new backyard area but it sure makes me want something here now too.

I also worked on spray painting these chair I bought at auction for a total of $40 for both! I was patting myself on the back when I saw a similar new version going for way out of my budget. 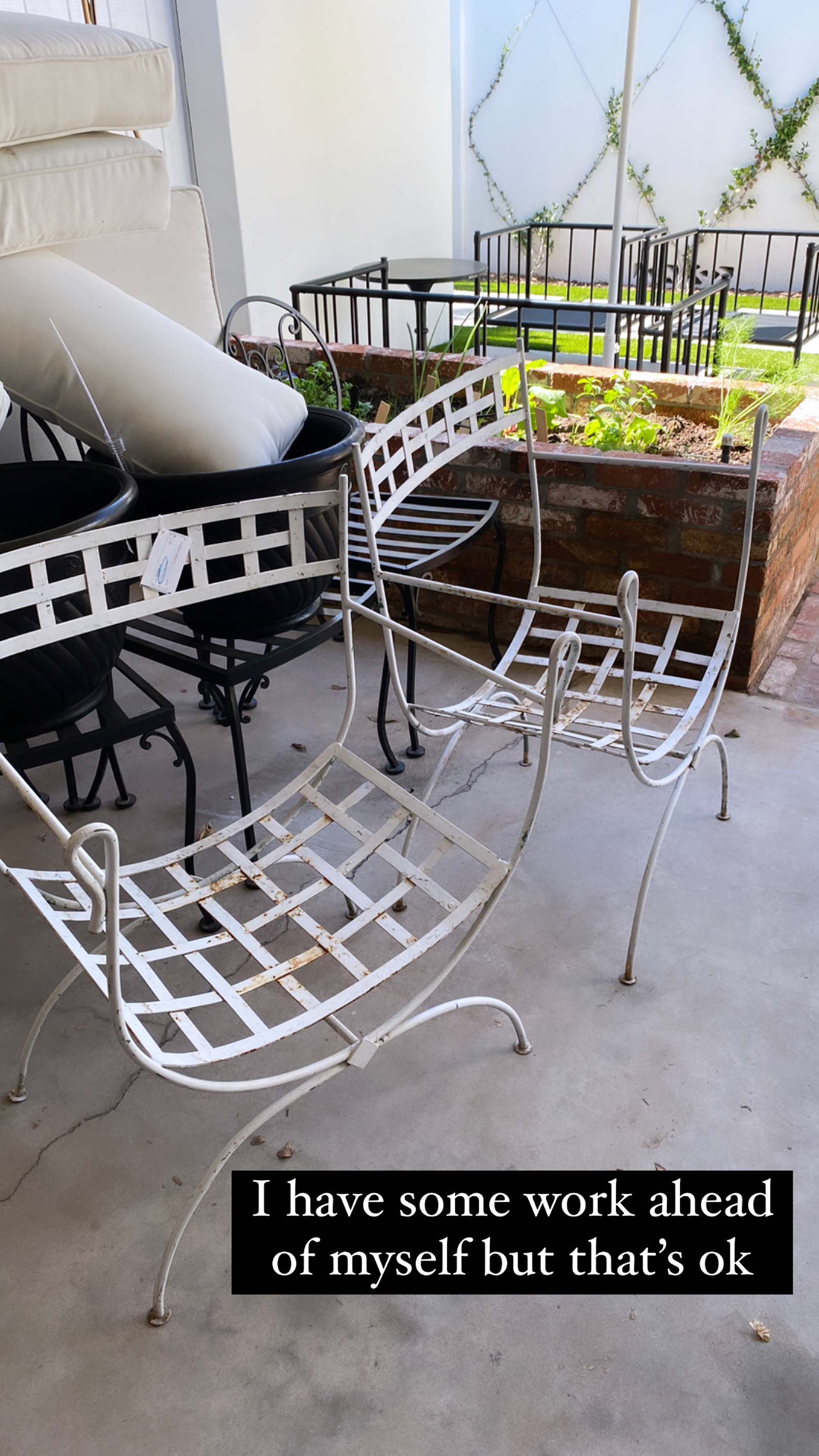 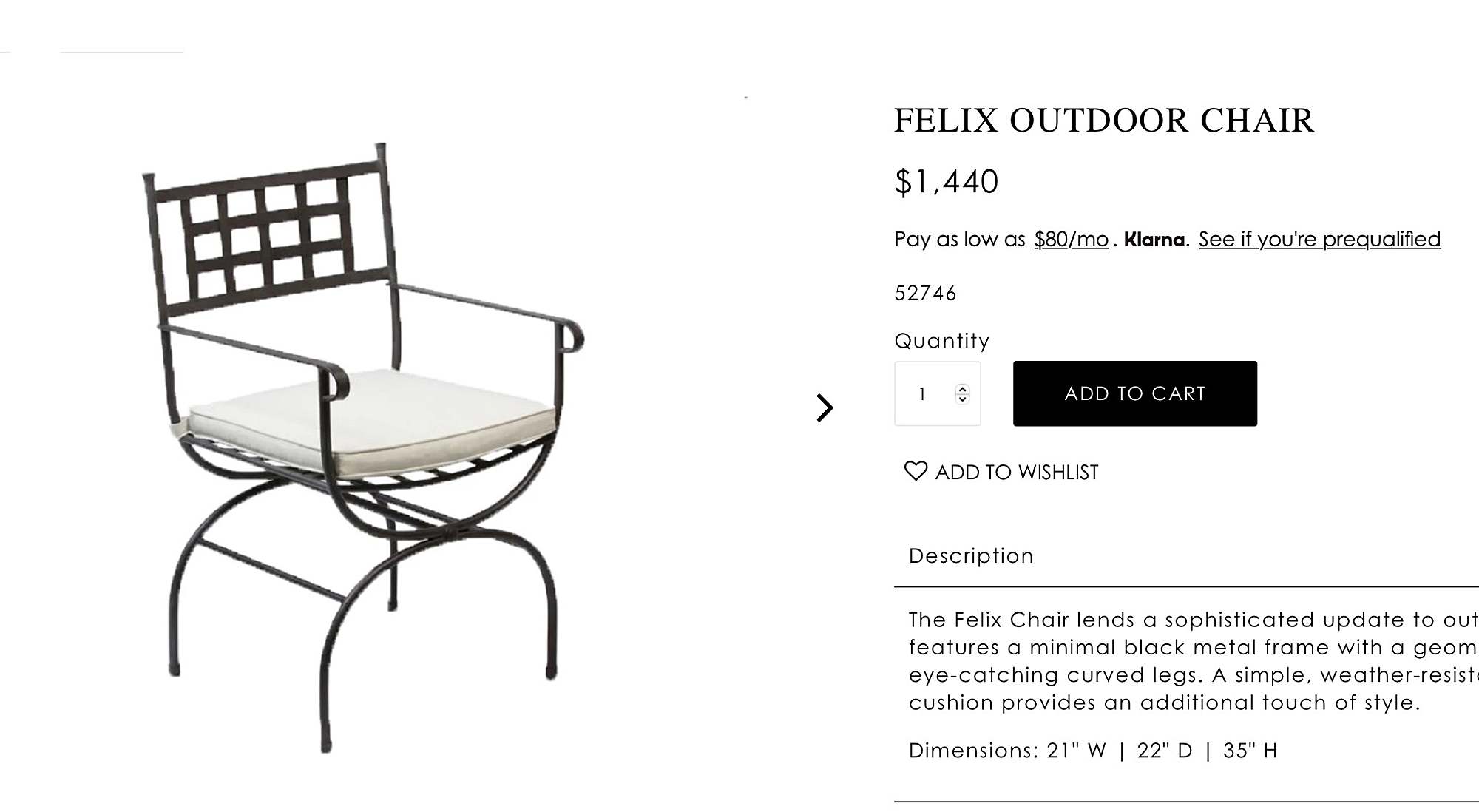 Now did I really put in that much work into it? Kinda I scraped off some paint with a wire brush and started to spray paint and call it done. I’d like to fix it up in some other ways with bending the iron back in a better position but right now, whatever. It’s old, and it’s still cuter than the new stuff out there from the big box stores.

Gotta run, off to make sure things are going OK outside!

There are no comments on Suddenly we have plants! And other things around here….