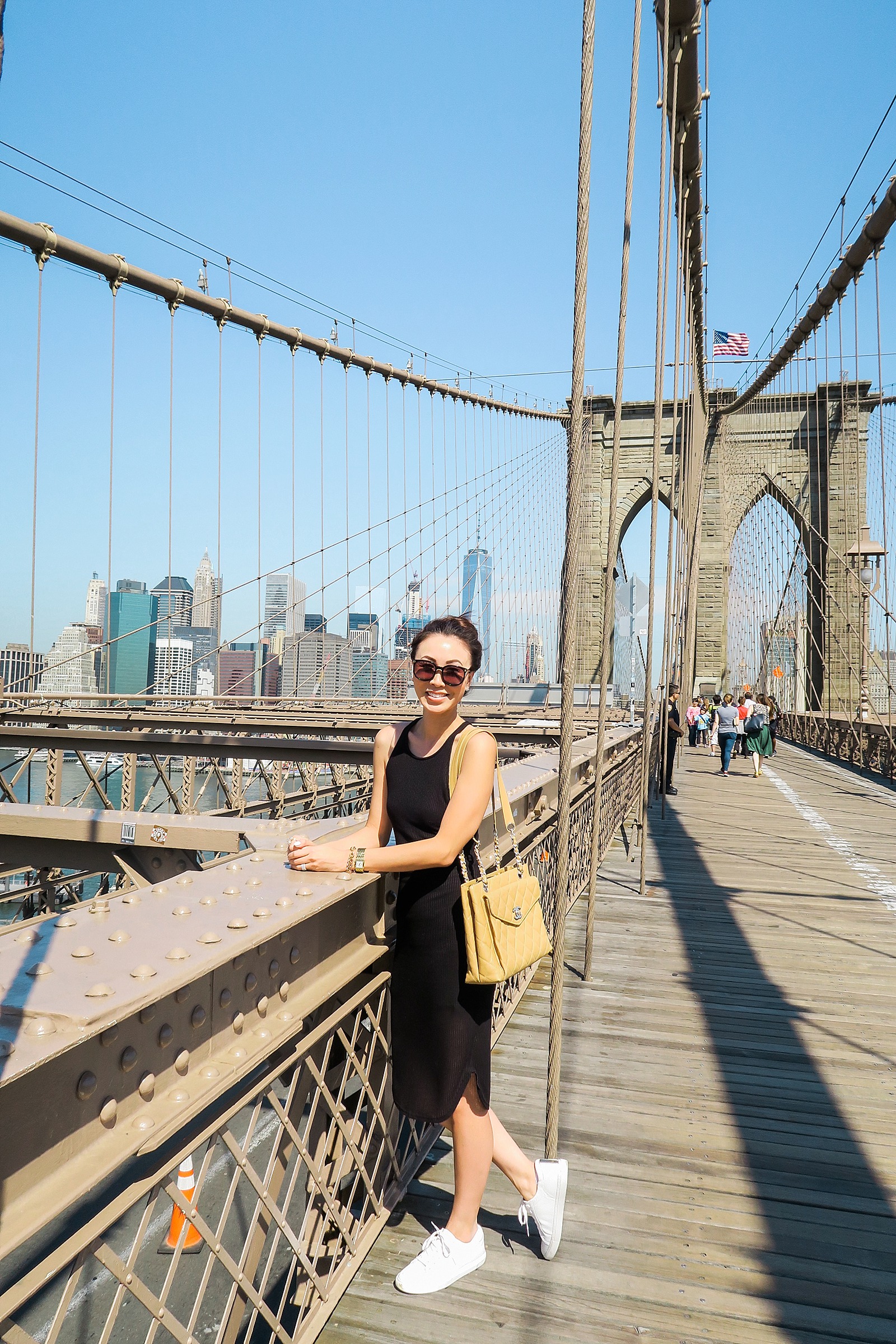 I had a little different agenda for the short trip to NY, a place I’ve been a handful of times – first was meetings and second was exploring or revisiting places just because.

I was happy to stay in Brooklyn, it’s very up and coming and has already come a long way over the past 10 years – more affordable and I was told many people who work in the city move there because it’s less expensive and not far from Manhattan.

I told Meagan I wanted to walk the Brooklyn Bridge – like when Miranda and Steve met in the middle. 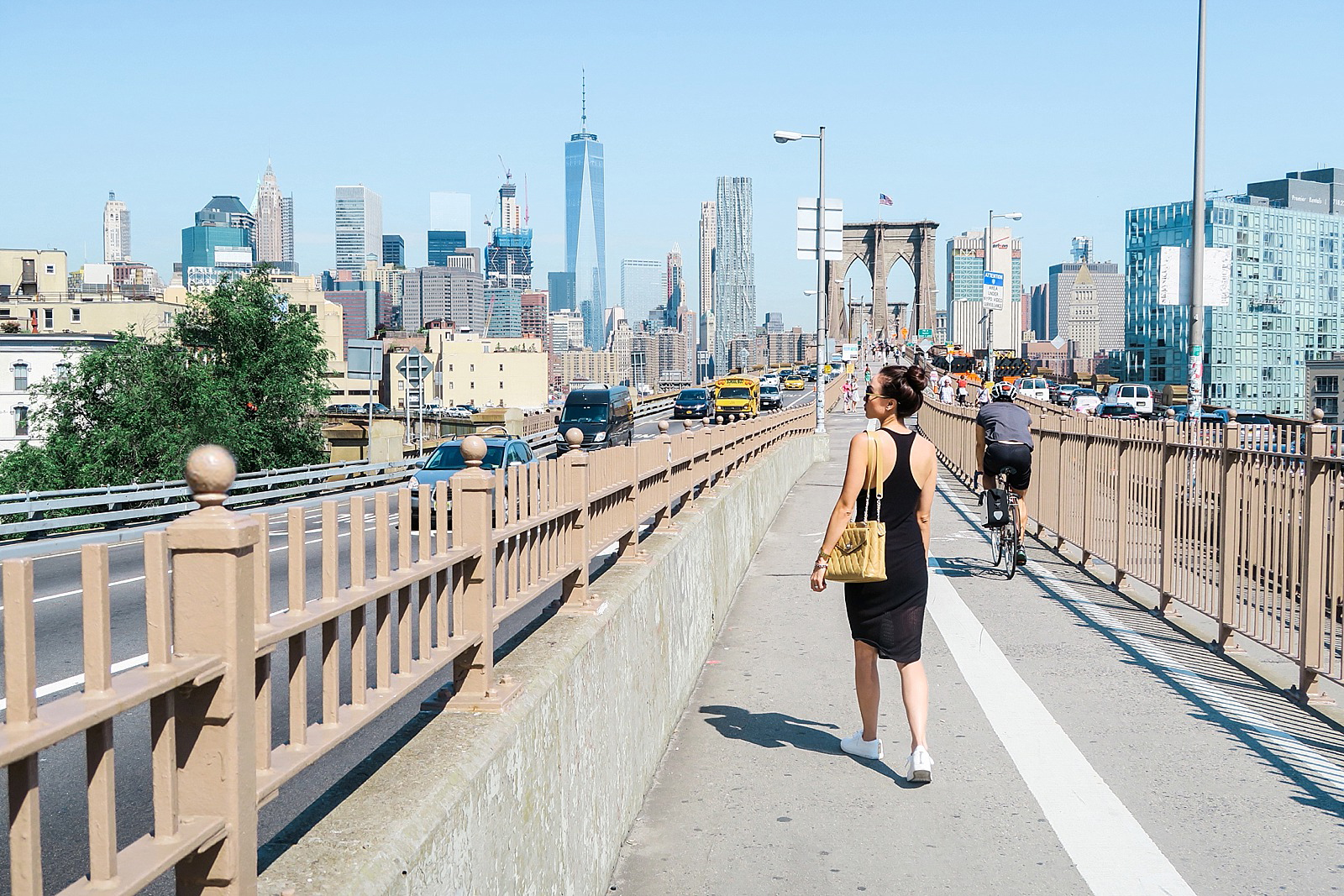 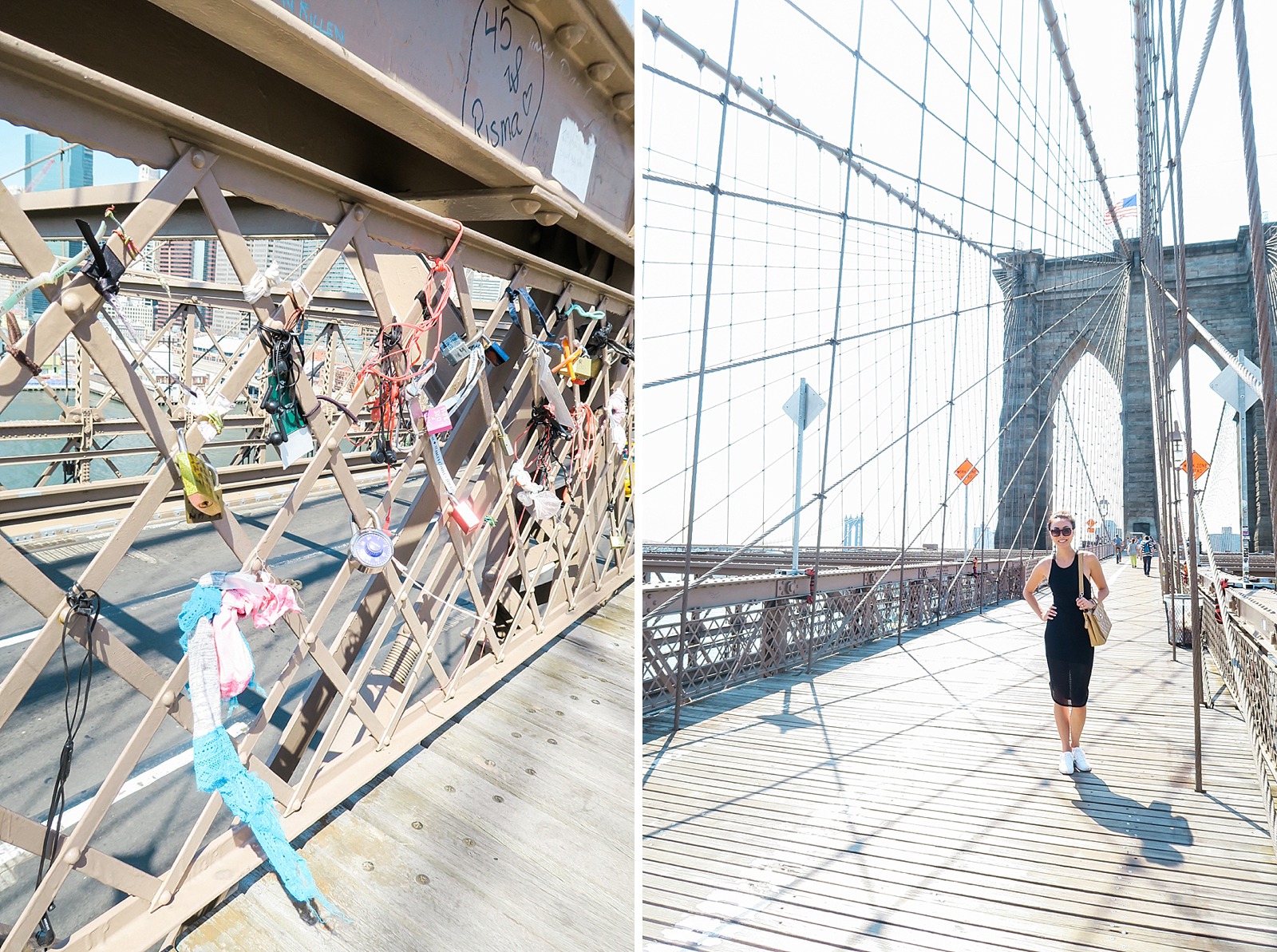 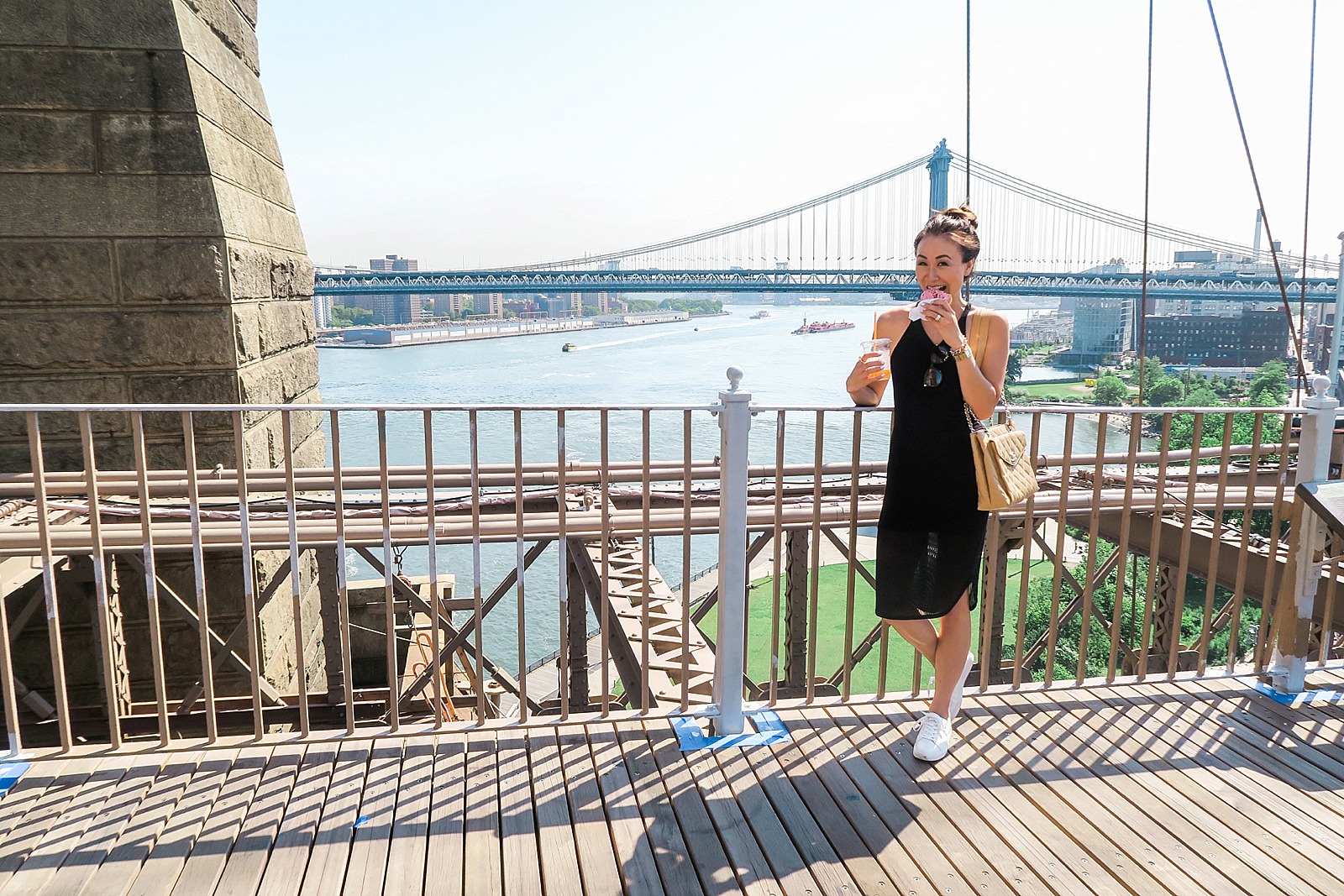 I also enjoyed my Dunkin’ Donuts – pink with sprinkles! I think you all know I am obsessed with Dunkin’.

The last time I owned white sneakers for walking around (not Nike) was high school, maybe they were K-Swiss or Adidas. I’m loving that they are back in style and you can pair them with almost anything and turn your outfit into an acceptable sporty look – and still look good while being comfortable in your travel photos.

I found the best no show sneaker socks, and I mean it. These socks actually cover the top of your foot so you don’t feel it rub at the top and is hidden enough below the ankle.

One of the times I visited New York was the year after 9/11. I was in college. I saw them digging and remembered that I would be back one day to see the memorial and here I was. 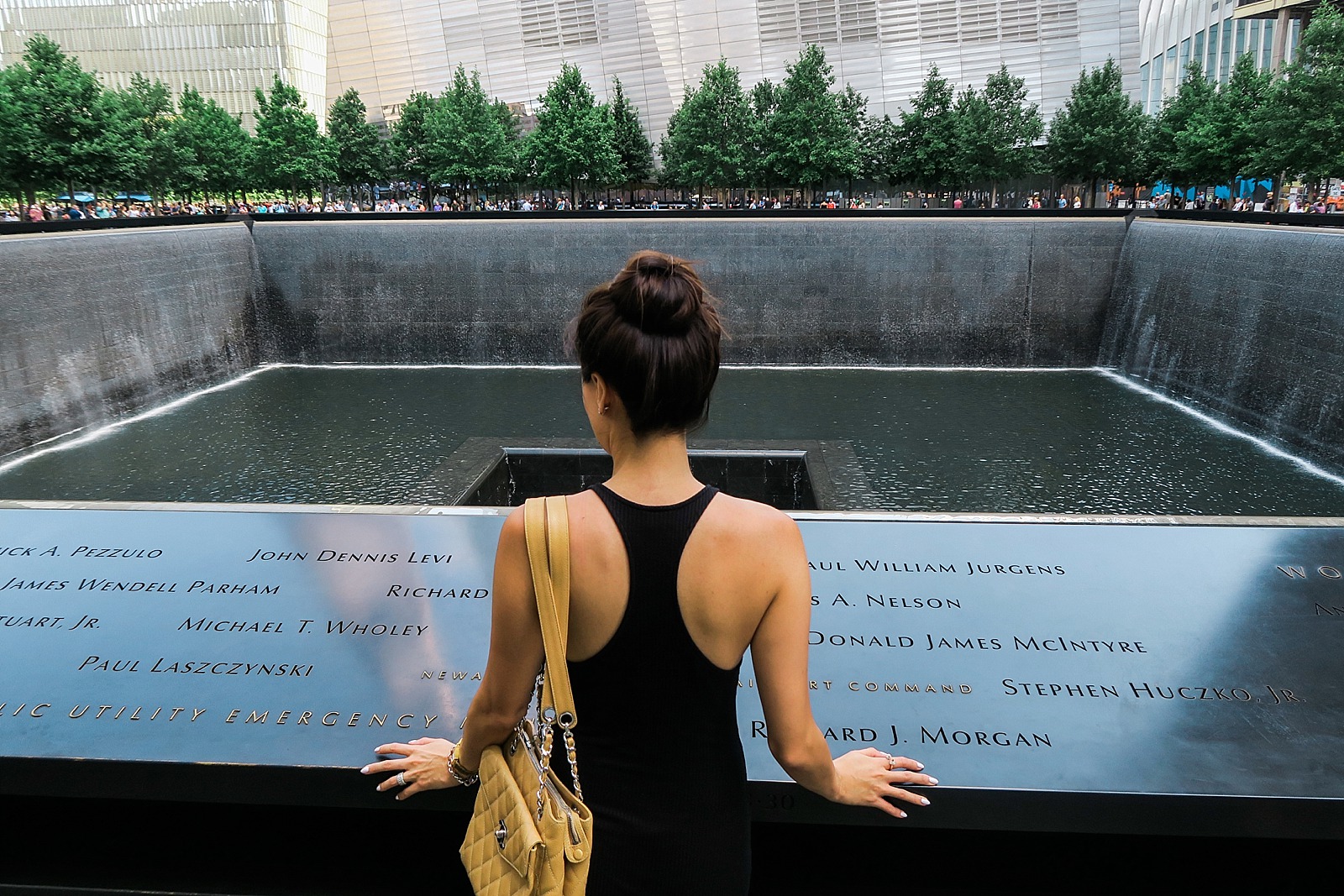 Here’s an idea of what it looks like – where both towers were are now pools, with names honoring the lives lost. It’s very emotional to be there, remembering where you were when you first heard or witnessed it. 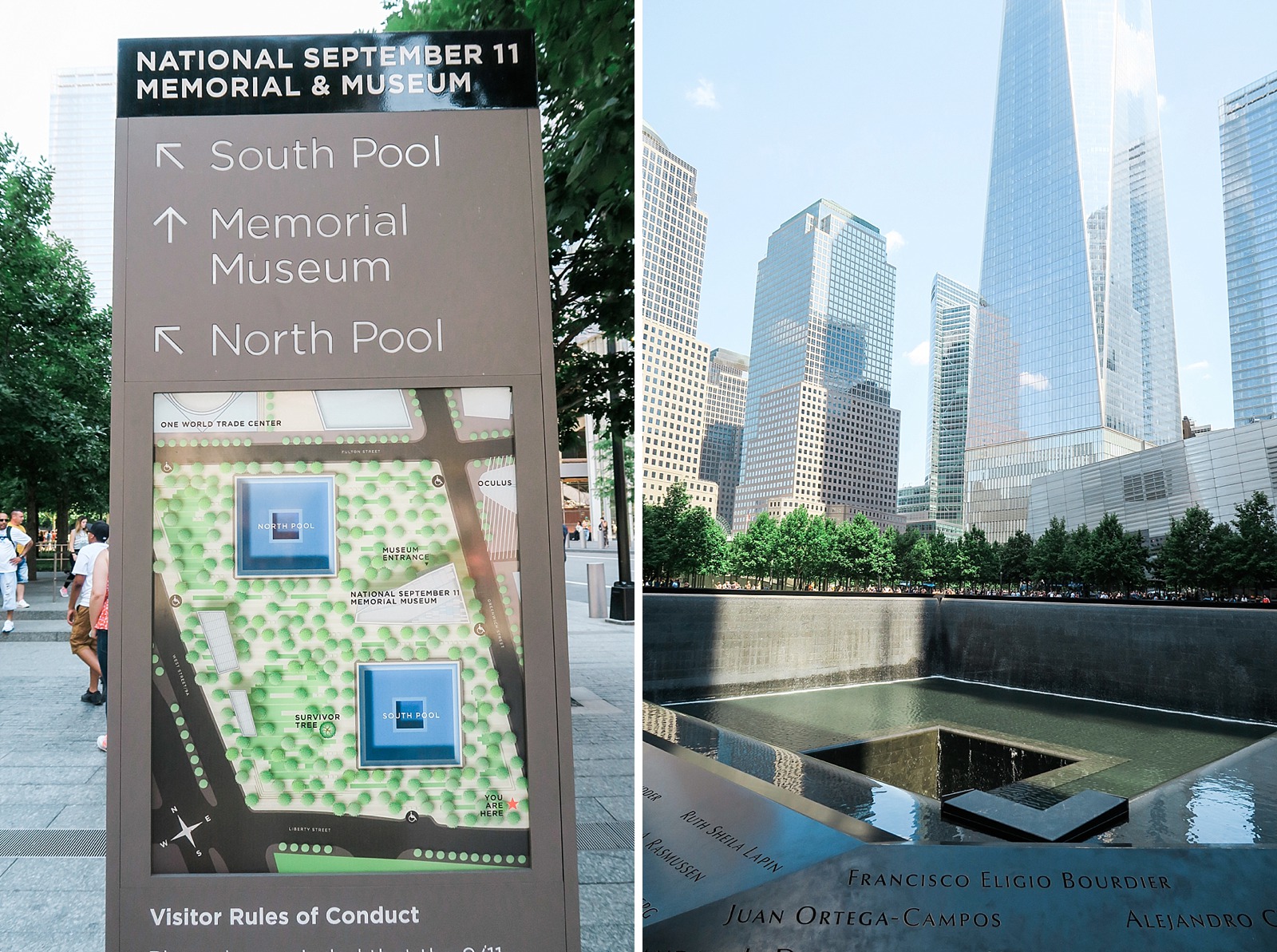 The day I was in meetings Meagan toured the city more on her own and shared a story – she asked an Uber driver where he was when it happened and he said he had just come out of the subway for a meeting at the park by the Twin Towers and he saw people running and screaming. He looked up and saw the second plane hit.

And now I am crying at my computer thinking about it. 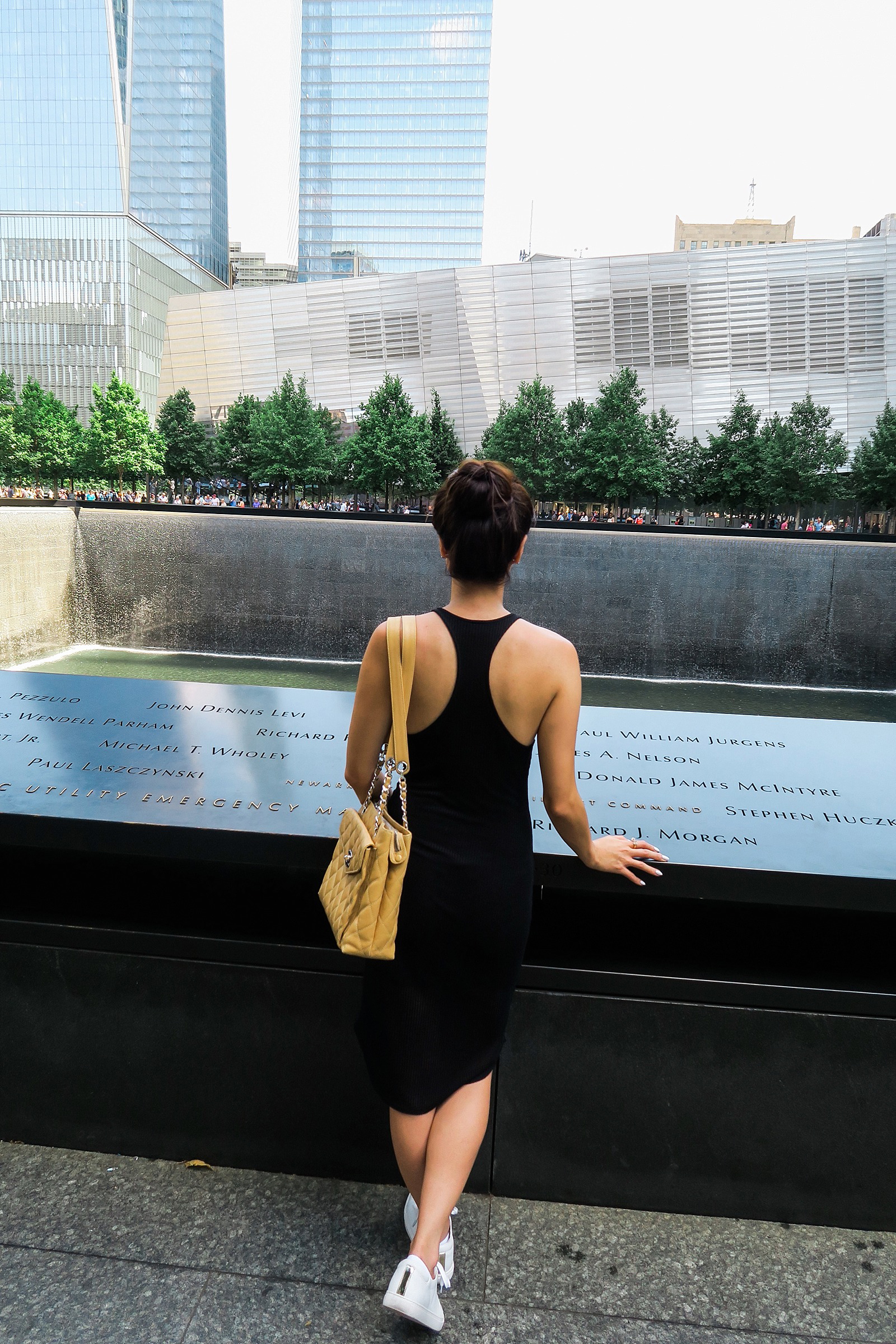 Visiting this is a must do – the museum is now open and we thought about checking it out but then conversations with locals (the best thing to do) lead us to another location we didn’t think of!

Thankful for my tennis – I’m a little crazy about the gold stripe on the heel of the sneaker  – it’s a touch of glam and there’s support in the soles – so hurrah! It’s the perfect travel shoe – it’s not a workout shoe, and it can go with normal outfits – a dress, jeans, and leggings!

Our Uber driver, and a police officer mentioned the tramway car to Roosevelt Island for the view – it’s suspended in the air! You get off at 59th Street and Lexington and take the green line. Then you walk a few blocks and find the tram.

The cost one way is the same as a one way subway ride – $3. The subway also stops at Roosevelt Island station (F trains) which means it’s below sea level. So cool! 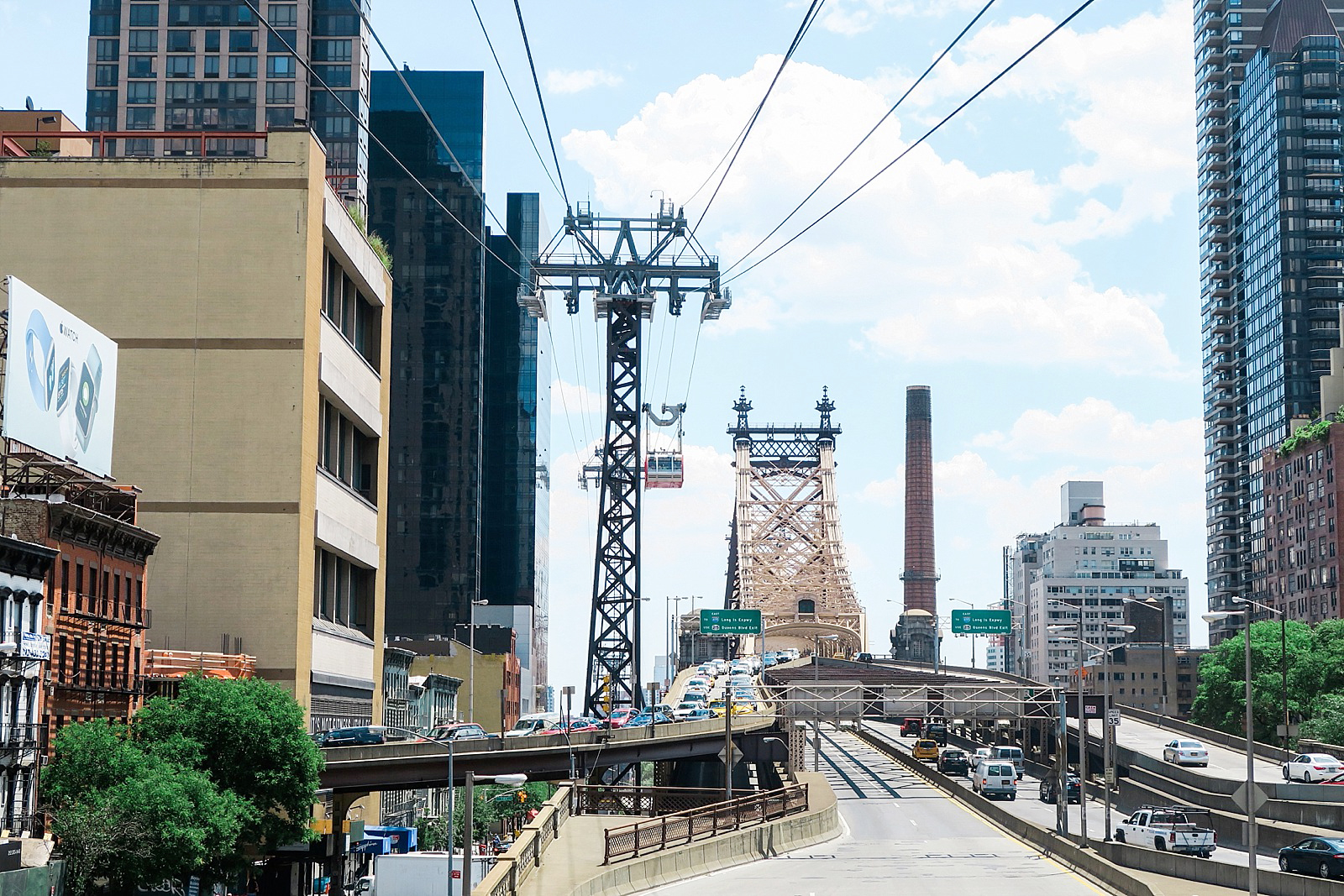 And the view is so fun! That’s Roosevelt Island – only 2 miles long. Mainly residential. 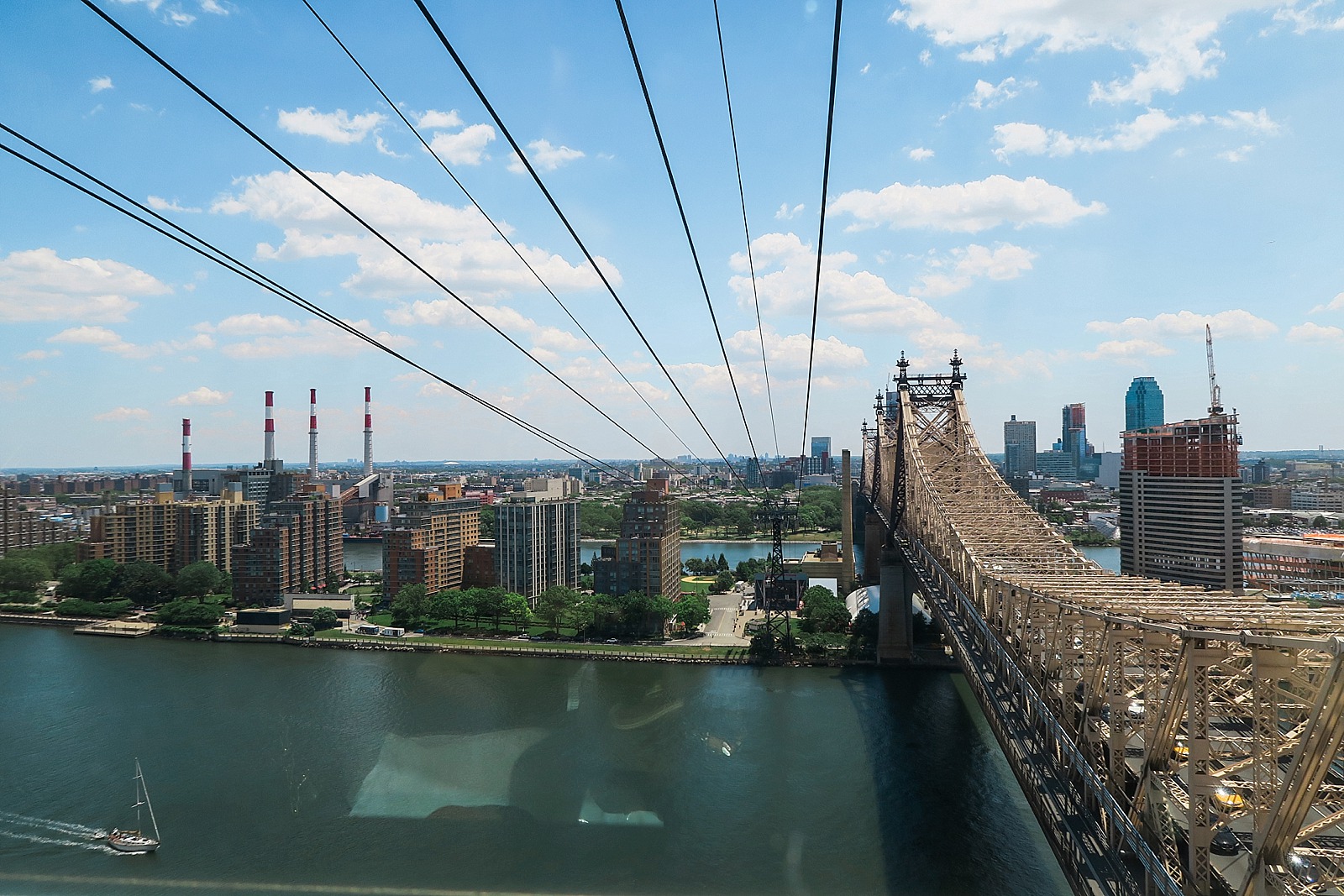 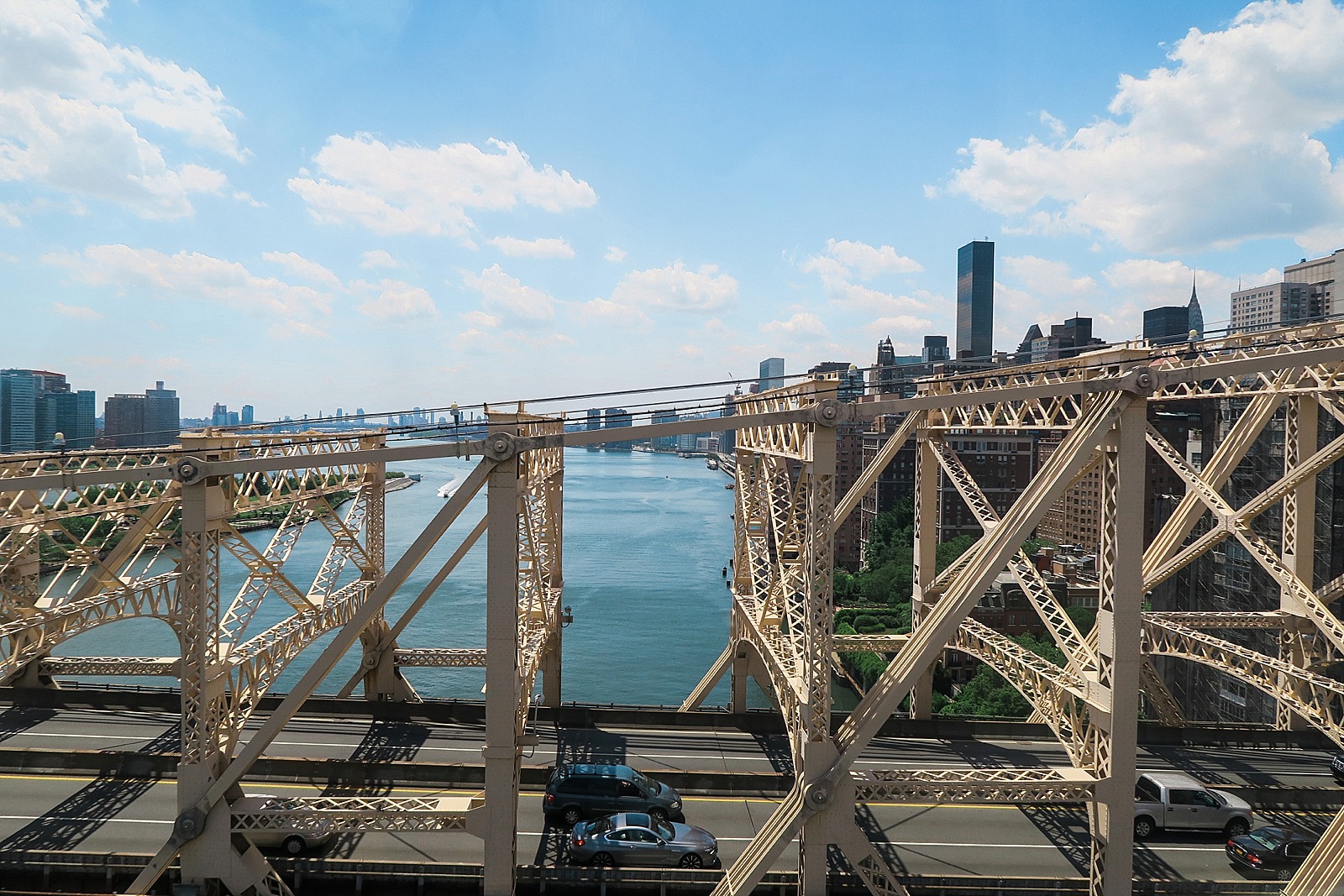 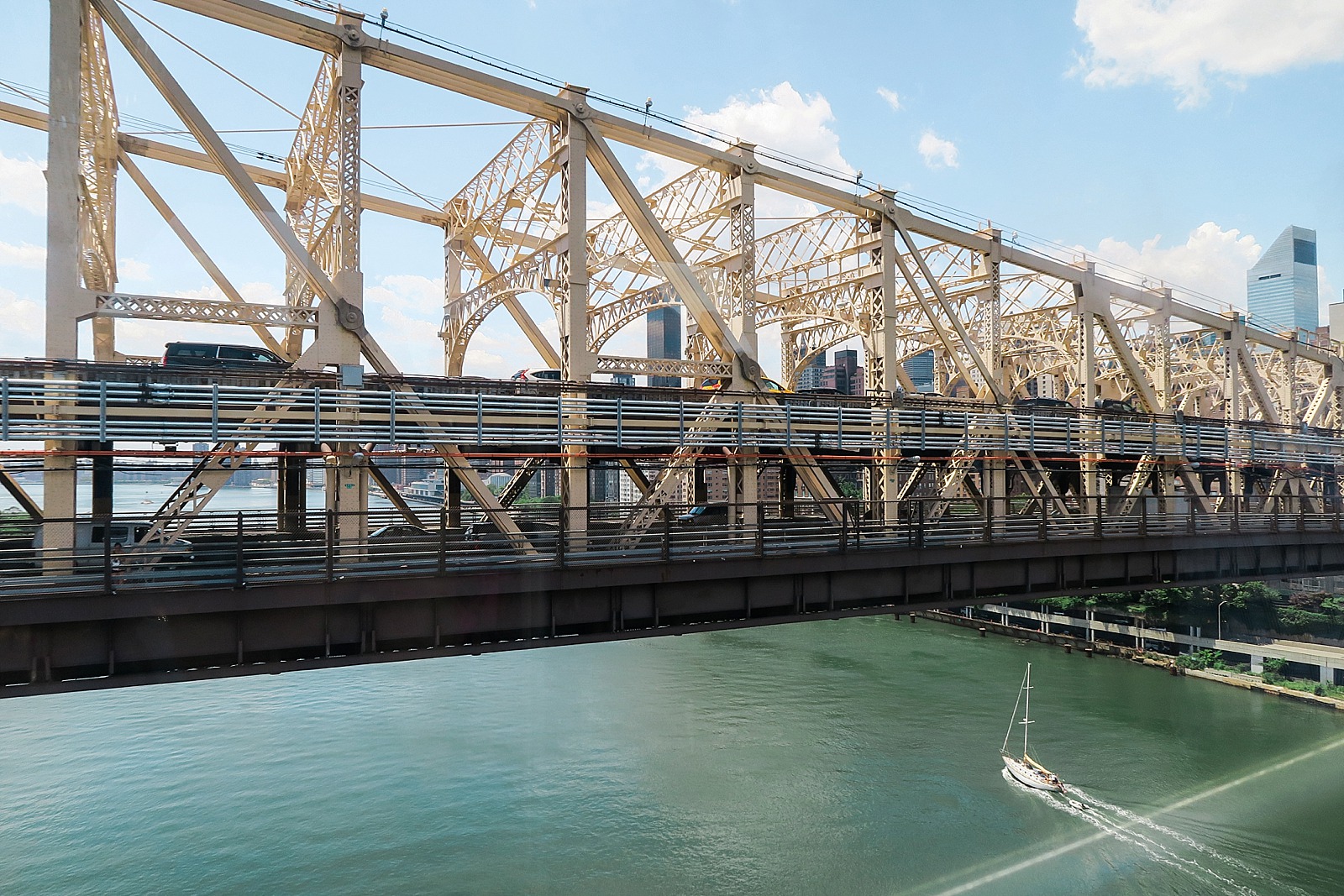 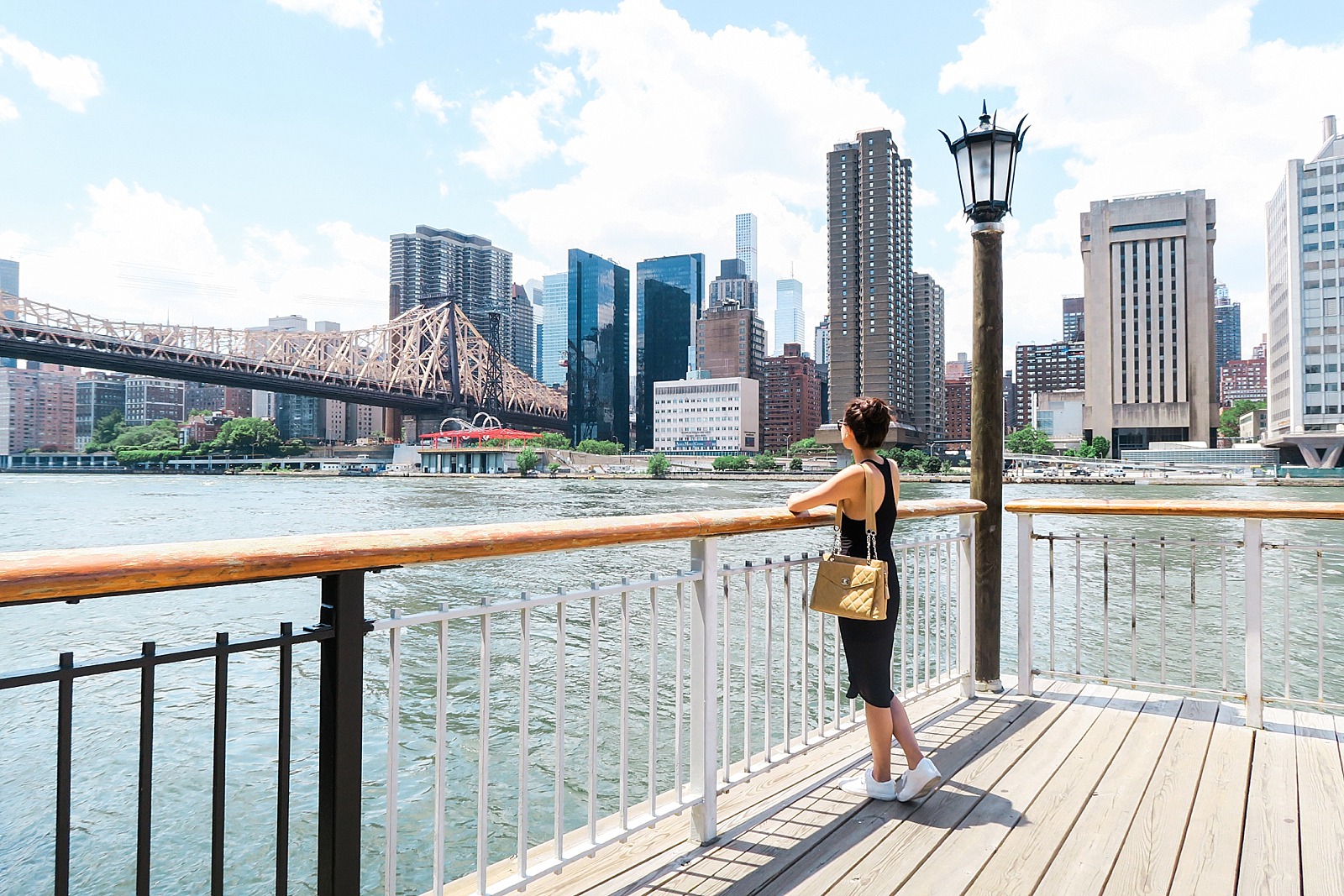 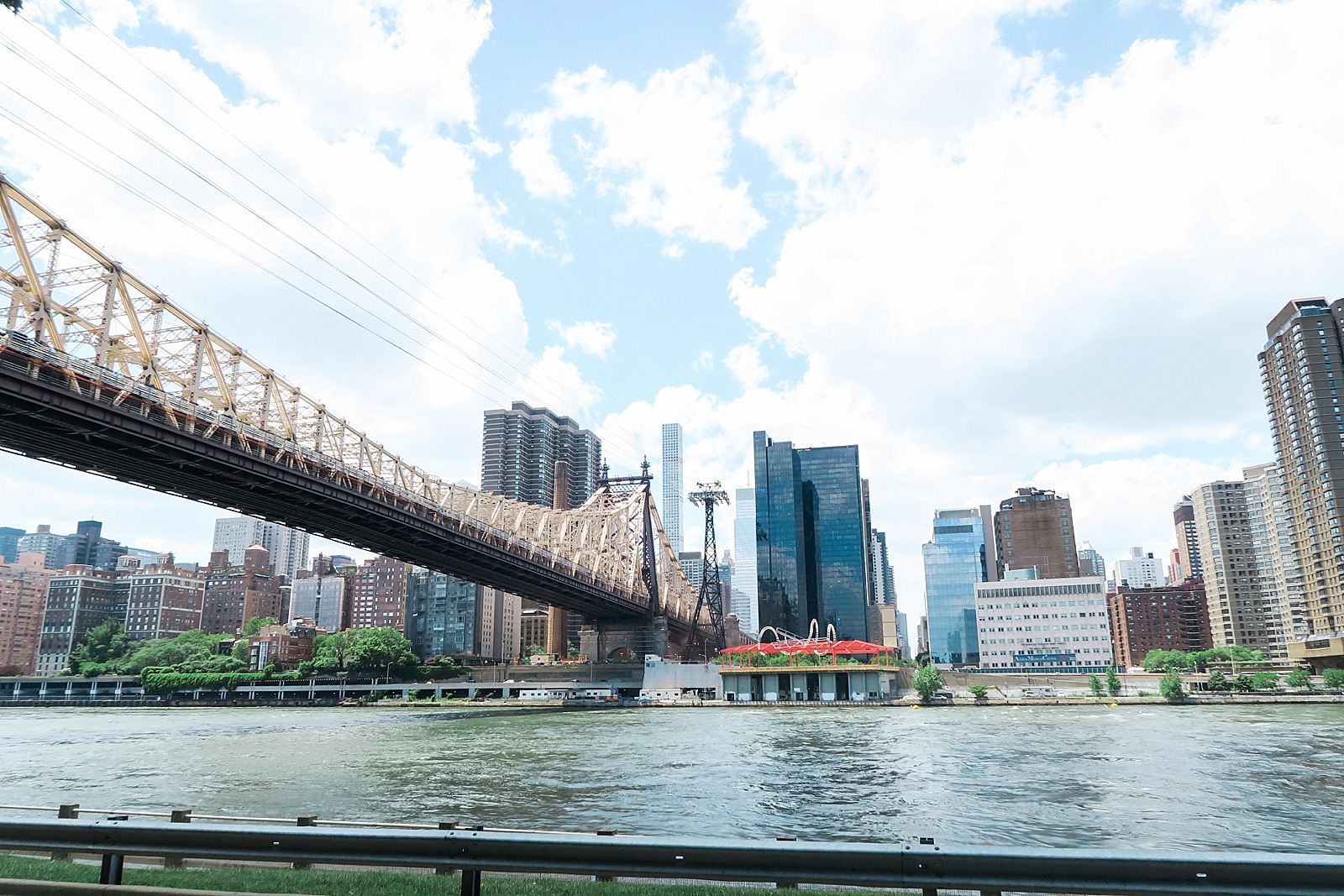 We had some pizza of course, shared a salad and walked around to take in the city views from a little island before seeing Central Park.

I love Central Park – we had an hour left to check it out – it’s very close to Roosevelt Island so as soon as we got out, we walked a few blocks and made it!

Did you know Central Park is all manmade? It was created in 1857 by a landscape architect. All the trees were imported and planted. It’s about six miles long. 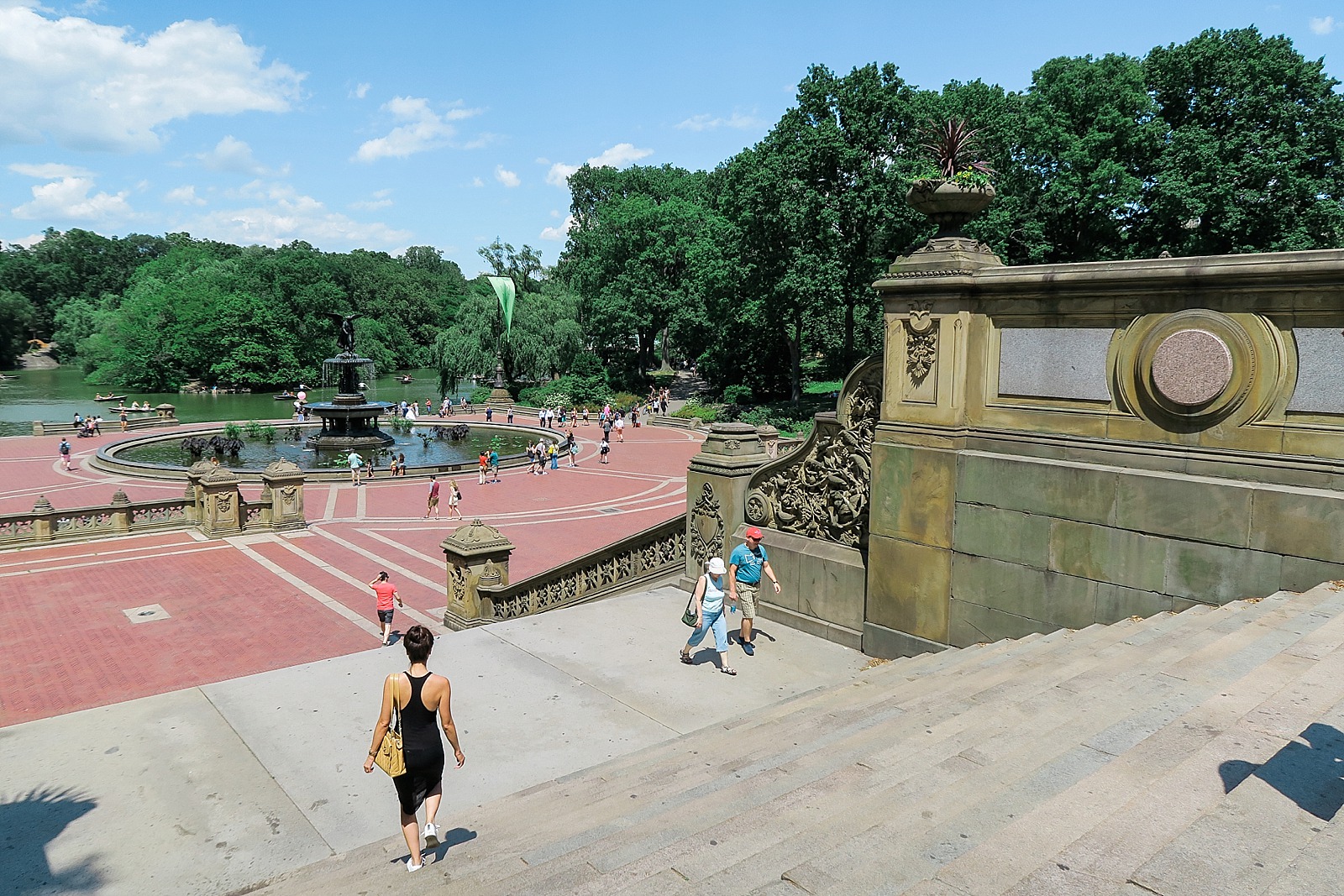 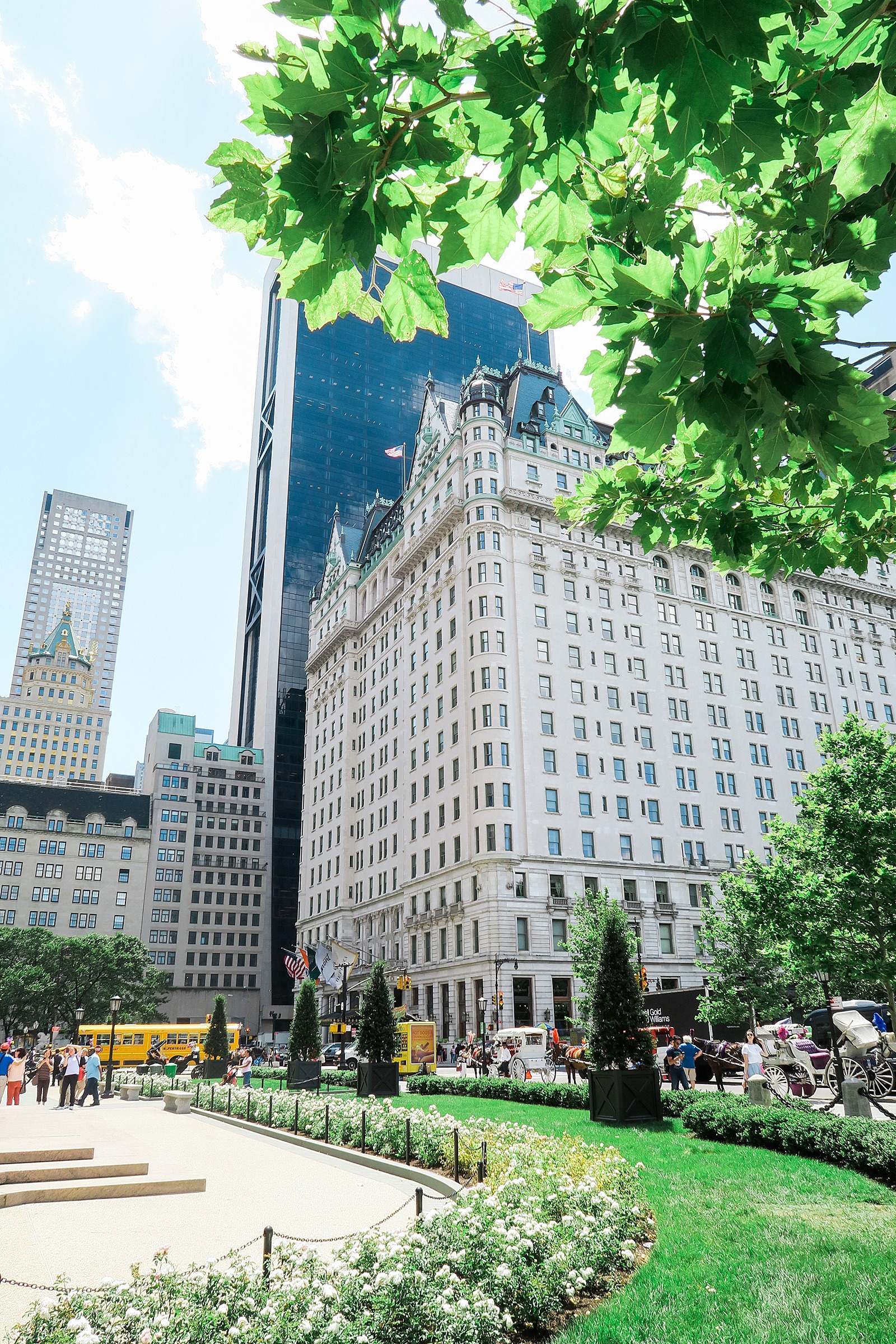 This is The Plaza!

We decided to take a guided bike tour of Central Park since we had little time and just wanted to enjoy it. Our cost was $80 for an hour and worth it! Our happy tour guide was Smiley and he told us fun facts and stopped at good spots and took our photos for us. 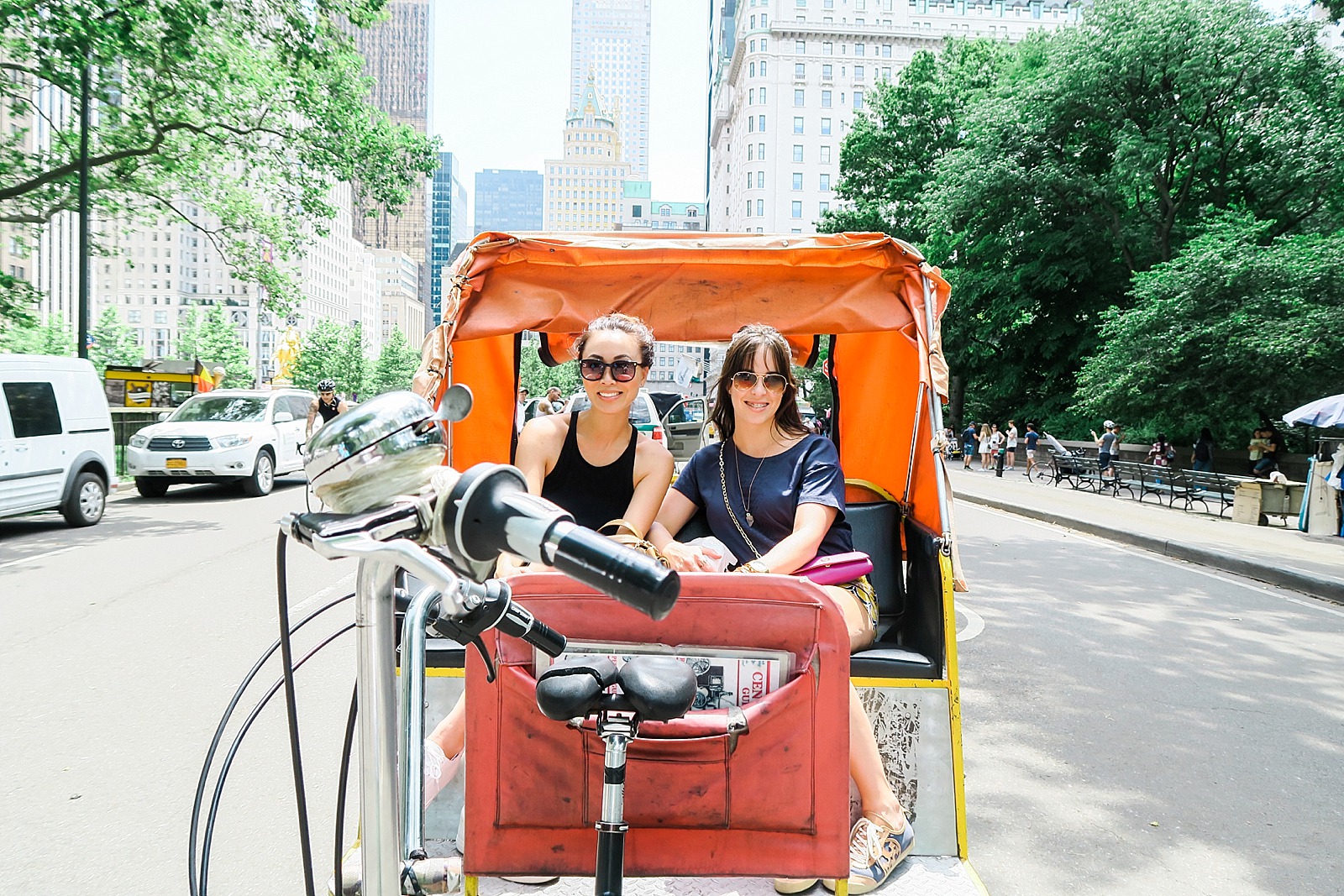 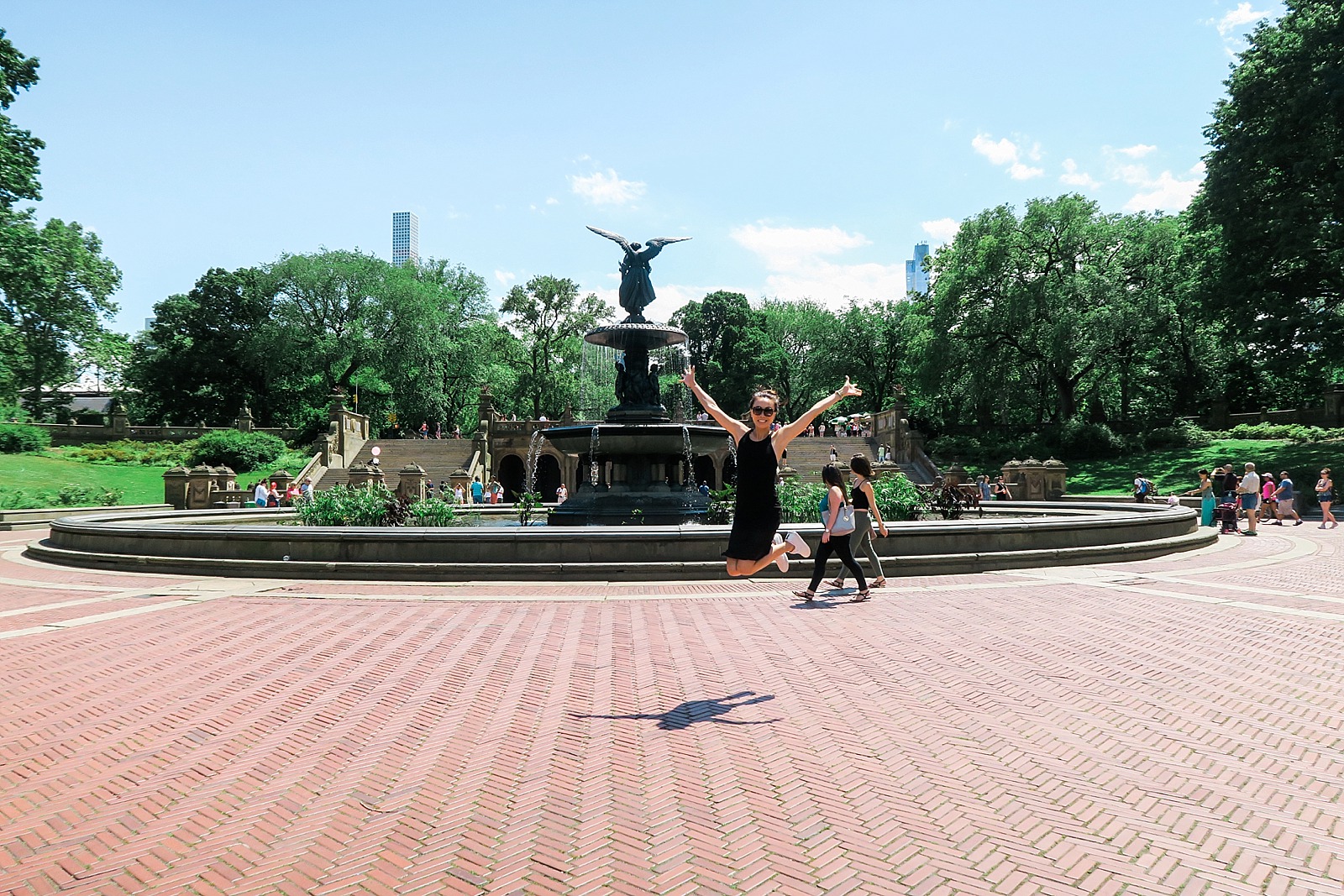 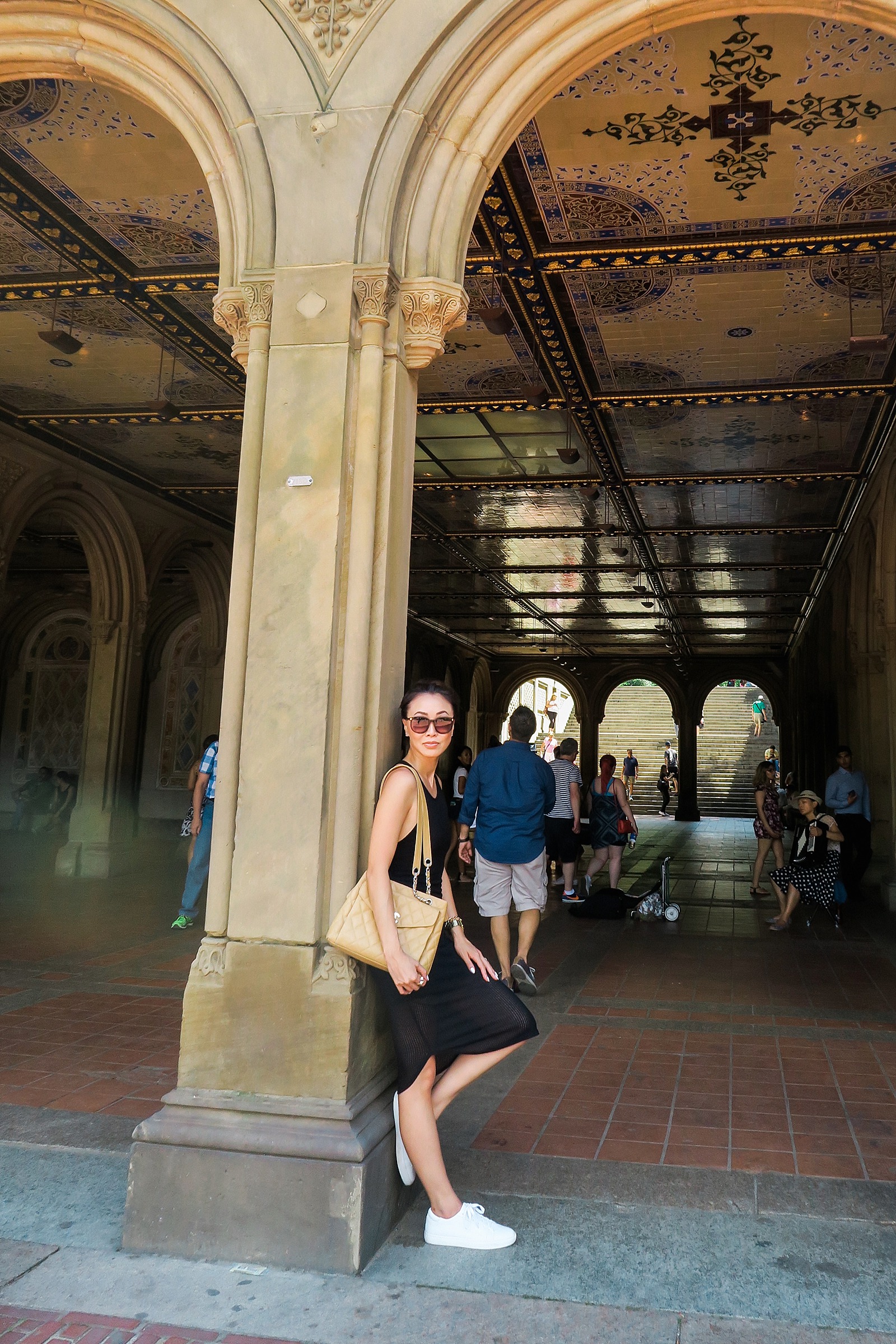 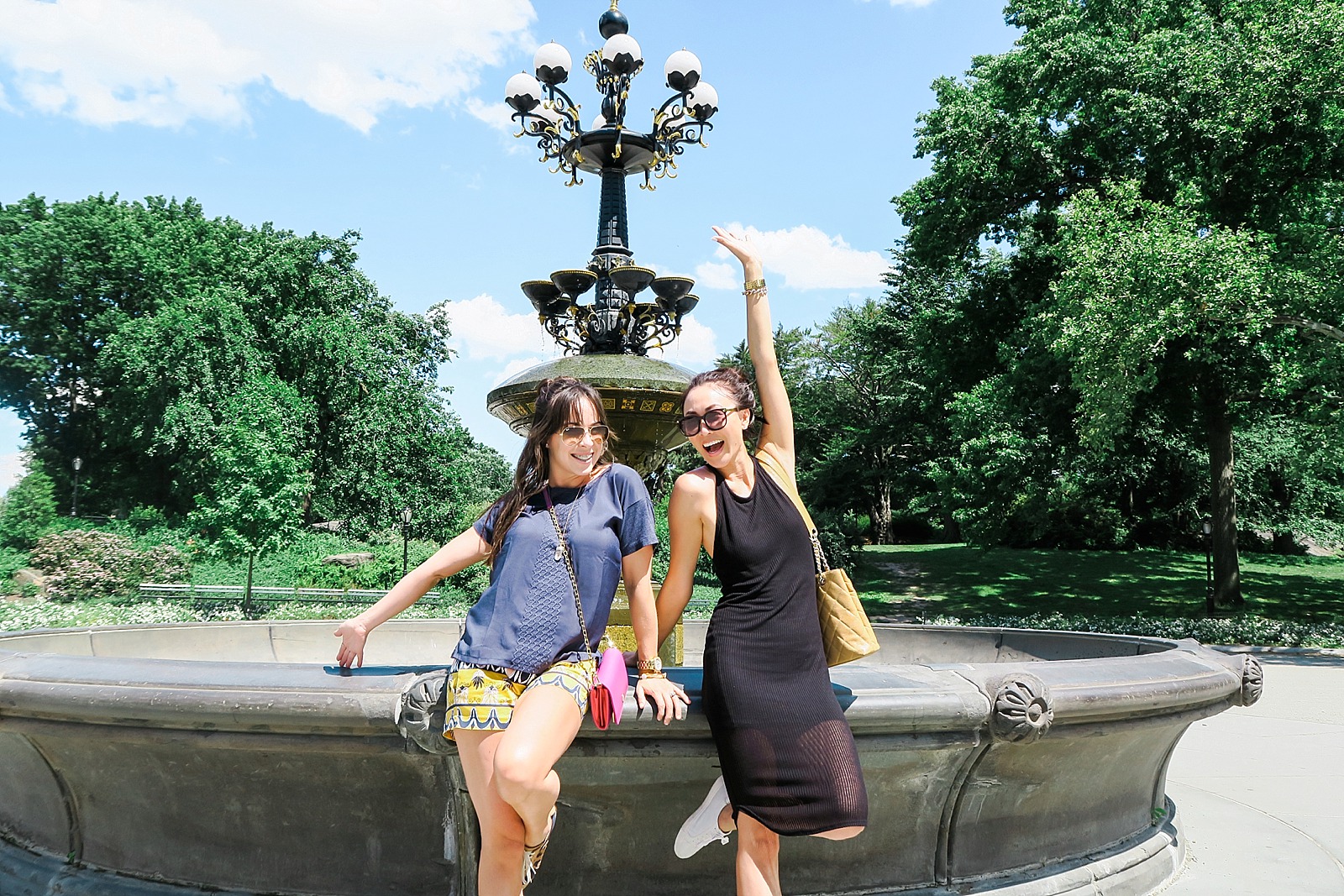 Besties at the Friends fountain! What a perfect spot for us.

The second day after all my meetings while Meagan was doing her own fun city exploring, we met in Times Square. I thought – why not, let’s go at night, find a spot to eat and do the total New York tourist thing.

Broadway is close by. Many years ago, my first time in NYC on a family trip in the 90s, my dad took us to see Lion King (the animation when it came out) at Radio City and that’s when I decided being a Rockette would be my backup career – as if it was just so easy to be a Rockette, haha!

On another trip I also saw Wicked with the original cast on Broadway which was fantastic – that was in February when I thought my face was going to freeze off my body. 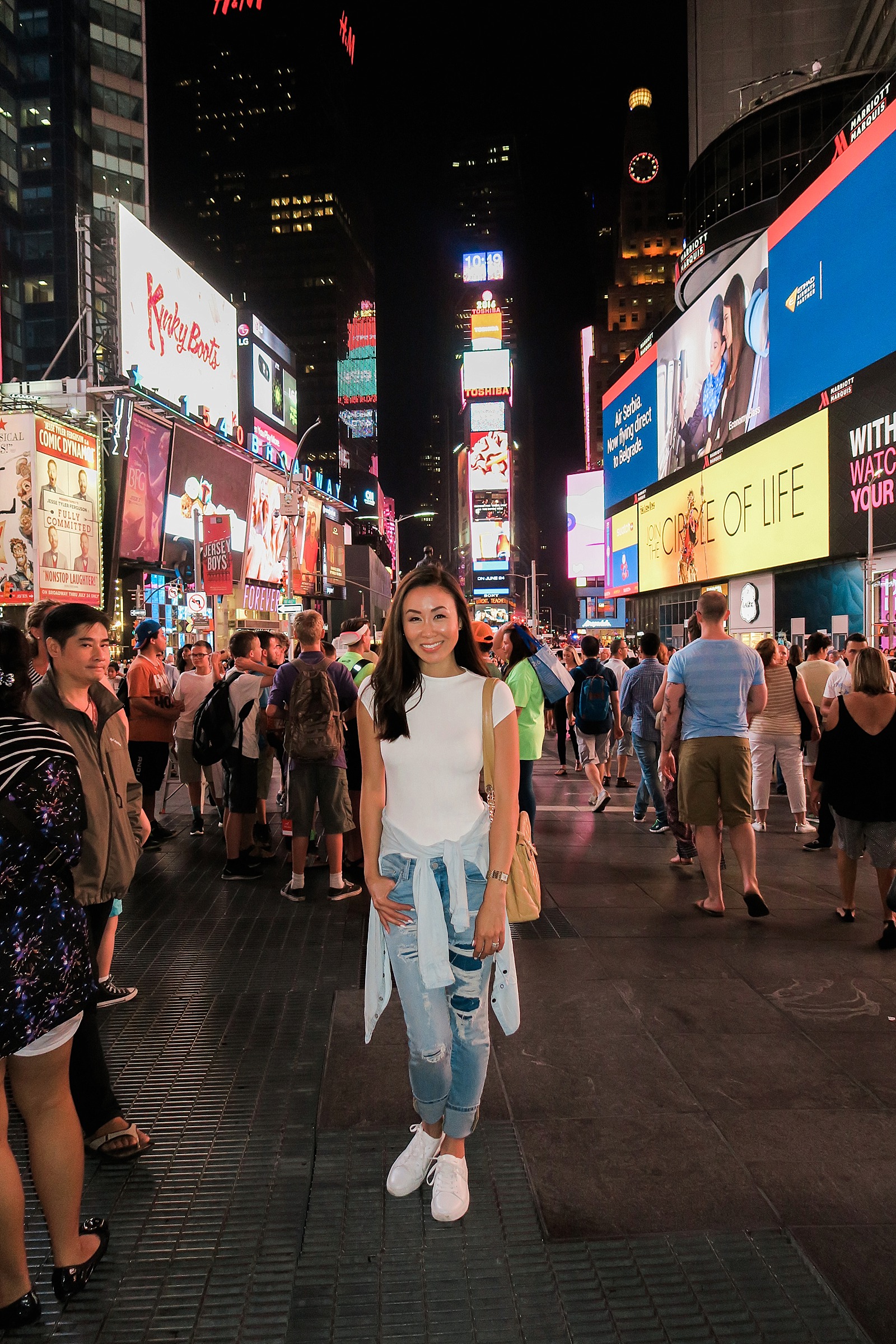 We found Junior’s and decided to grab dinner there – they are famous for their cheesecake and I love cheesecake just as much as I love a good donut. 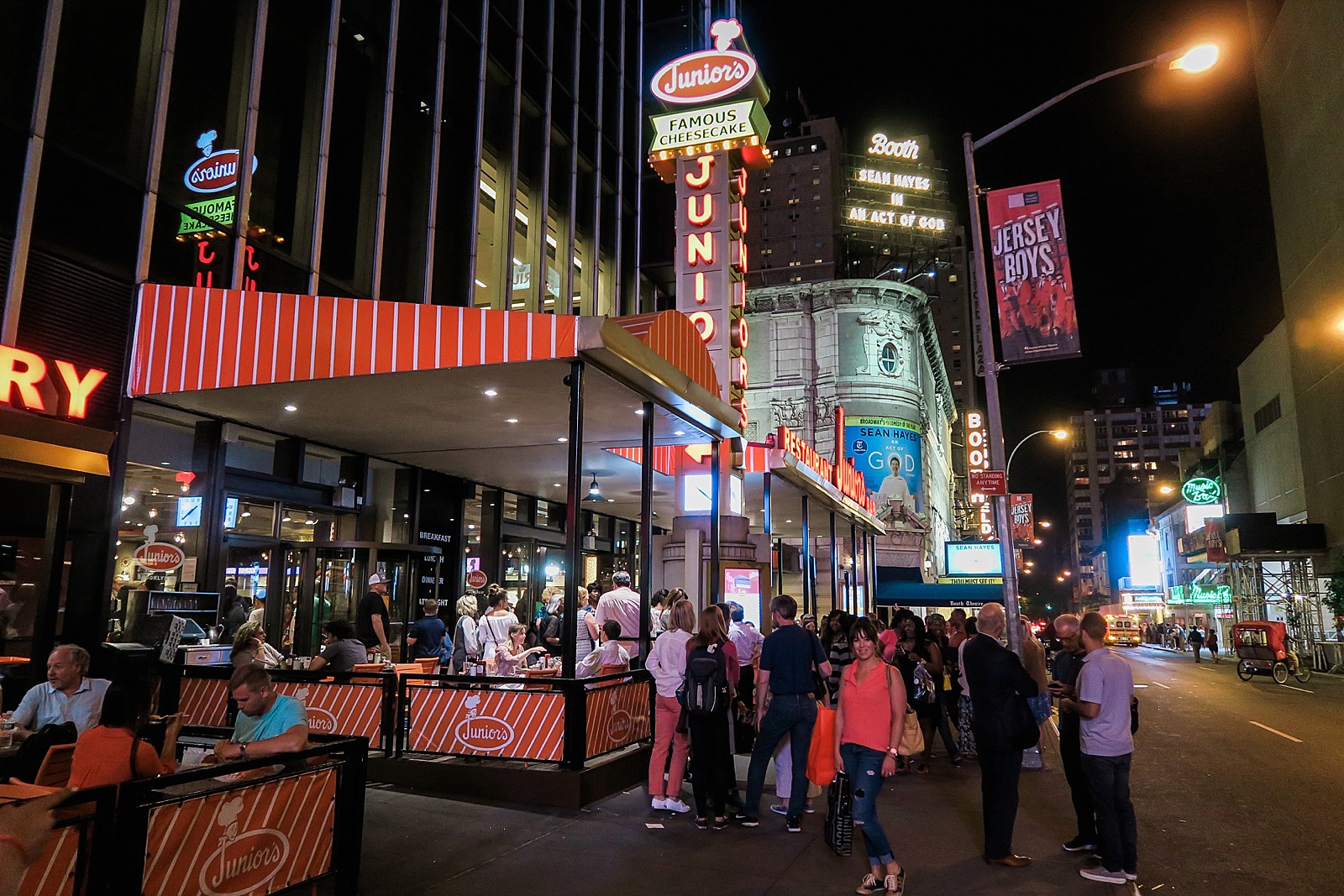 After this Times Square visit I can say I’ve seen it enough times to last me a lifetime. I would compare it to walking the strip in Las Vegas or more like Old Las Vegas – what do you think?

I sure love a city that never sleeps!

I took a 1 hour nap before we headed downstairs from our stay at Holiday Inn Downtown Brooklyn to catch our 6:20 am La Guardia flight. (I recommend it – the hotel not the early flight).

I had to buy another I heart NY shirt – every time I visit – my fifth one now? This is an XL size! I look forward to buying my sixth hopefully soon! *wink*

Come back tomorrow for epic shots taken by the Brooklyn Bridge, I’m so excited to share! 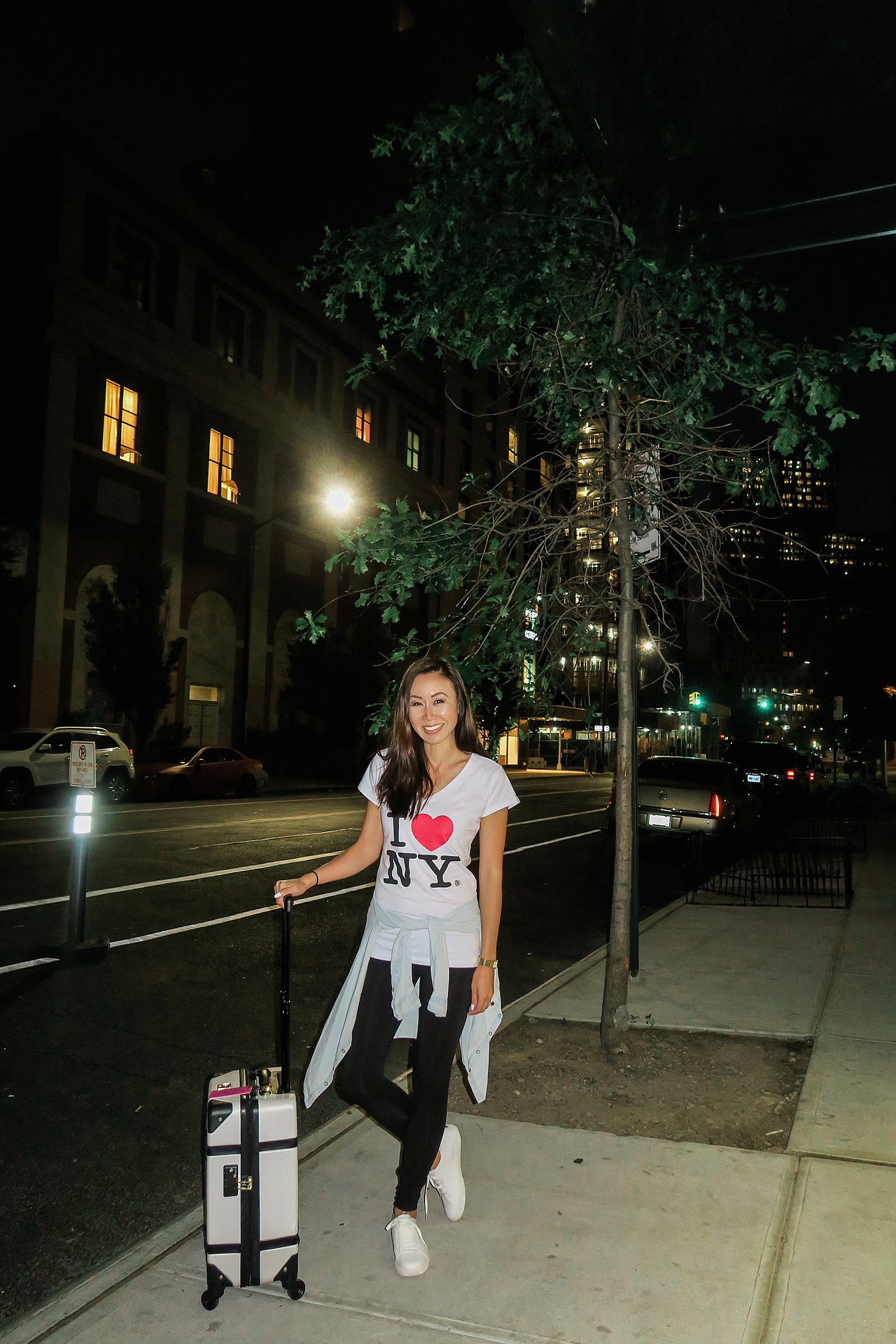 There are 6 comments on Sneakin’ around New York.