Categories Menu
I
have been wanting new kitchen barstools for a few months – our previous backless metal barstools were fine and served us well for nearly 8 years. It was more of a cosmetic change and once I saw Ballard was having a 30% off sale for a holiday the urgency really hit me. I just felt like I needed these Ballard Designs stools when I saw this months earlier and so when they were on sale I thought, now or never. I bought them during a weekend sale, Benjamin wasn’t thrilled but I did it anyway and after I set them up he said, “Good job, honey.”

This the way it always goes in our house. I wanted to buy something new, Benjamin is reluctant and says nothing is wrong with what we have (which is typically true, it’s not broken per say), but I replace it with something nicer, and he likes it. 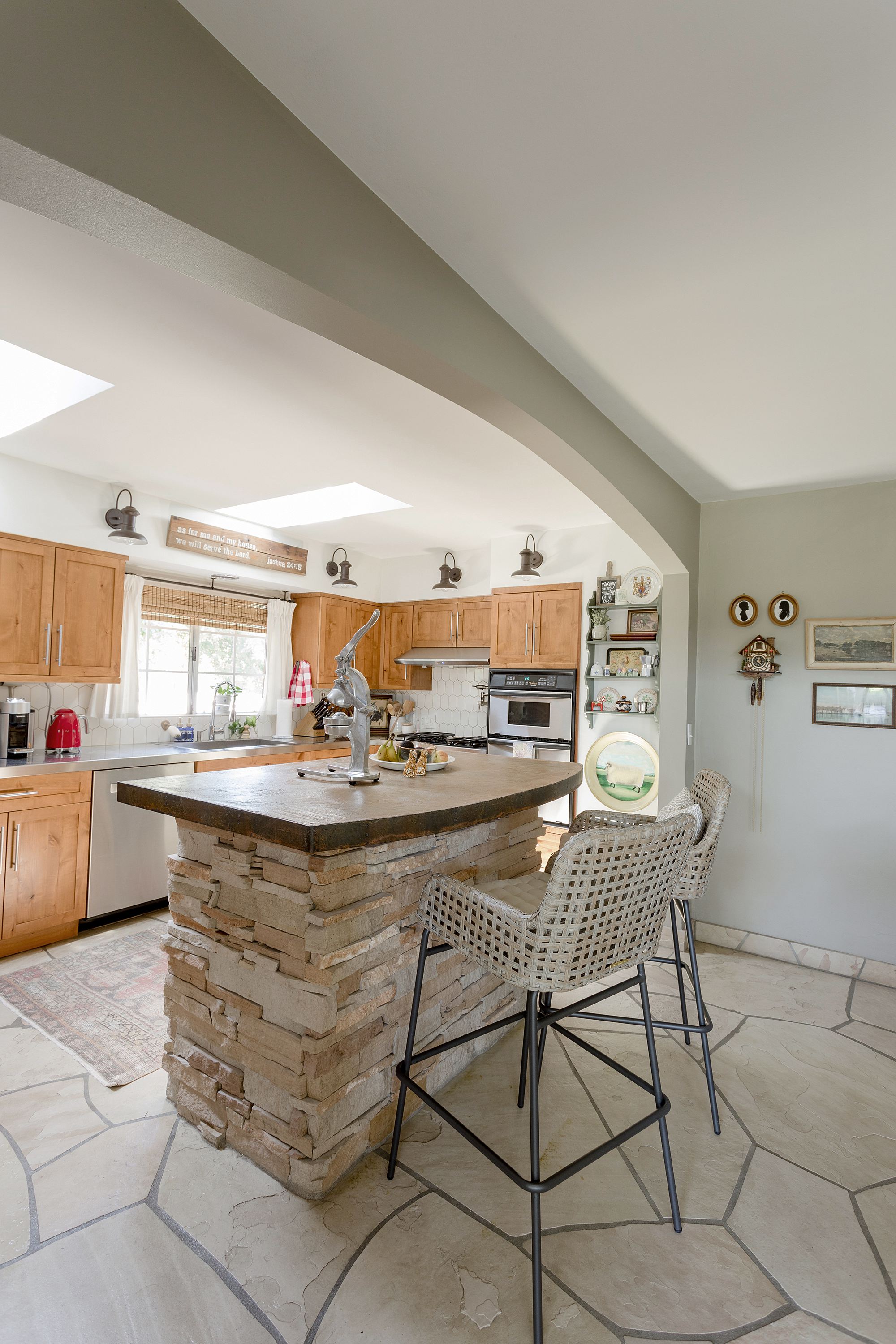 I love our skylights in the kitchen, so glad we did that! I had wanted them closer to the kitchen island but with the roof pitch that wouldn’t work, dang I always forget about those small things, but I still love them. I am also glad we removed the fan in the kitchen. It was already there and it was truthfully odd because you would be cooking something hot and the fan’s on and then your meal is cold.

In the middle of shooting closets and cabinets, I thought I’d share the kitchen in its current state. I ordered custom pillow covers. I order a lot of our pillow covers from Etsy because of their amazing textiles the seamstresses have access to that are unlike big box retailers. I kind of wish I went bigger with the pillows so they were taller than the backs, but I think it would feel like your tush didn’t have enough room on the barstool. If it bothers me in another year I’ll consider replacing it. We’ve got other things going on – like the garage project.

I moved some of my treasures to this shelf that I had painted a long time ago. It’s oil paint based and that was crazy to paint and cure! I found the Prince Charles and Princess Diana wedding plate at a hospice thrift store. Herb pot from London, trinkets from Mexico, Sweden, Benjamin’s little baby cup I need to fill with bamboo toothpicks. 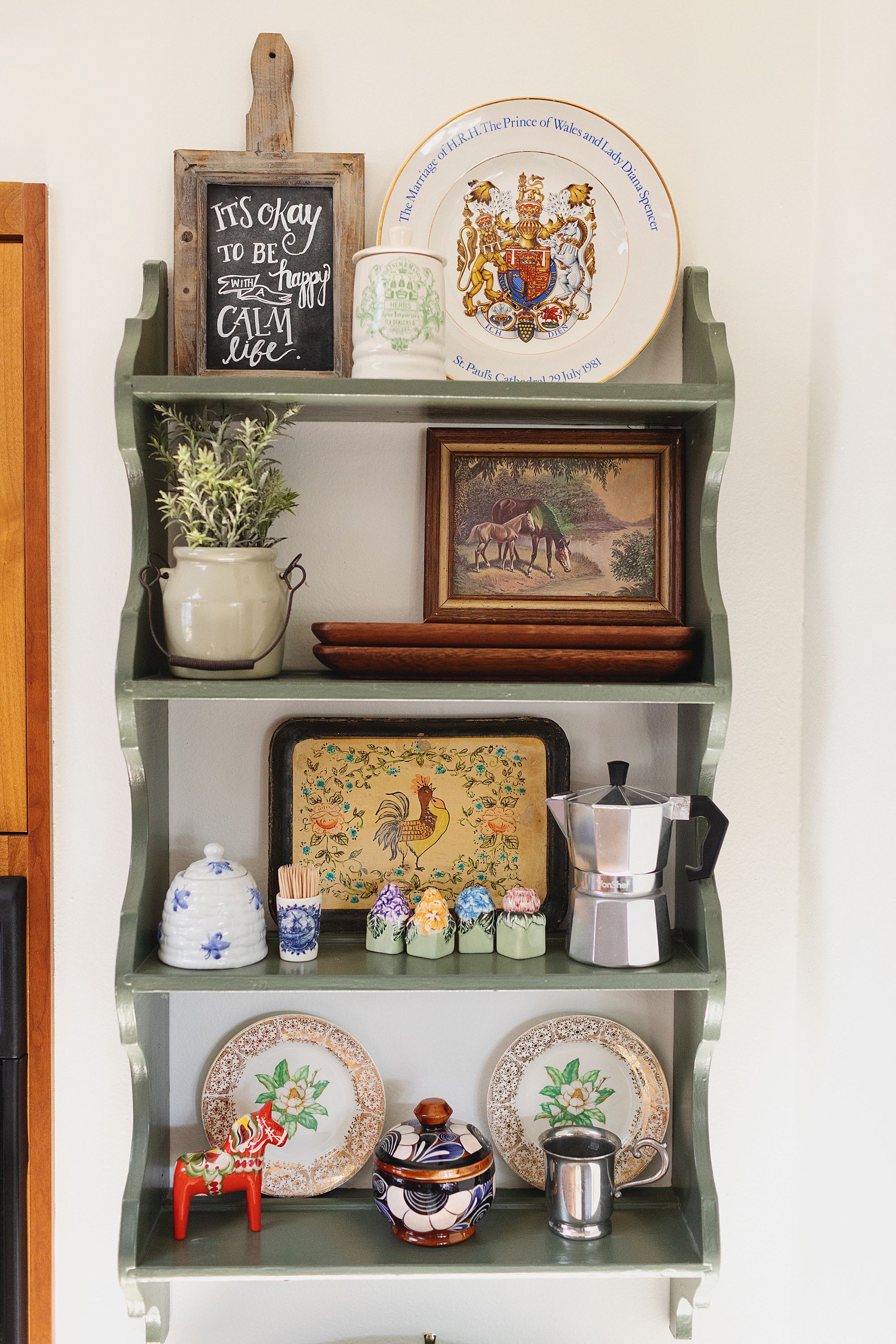 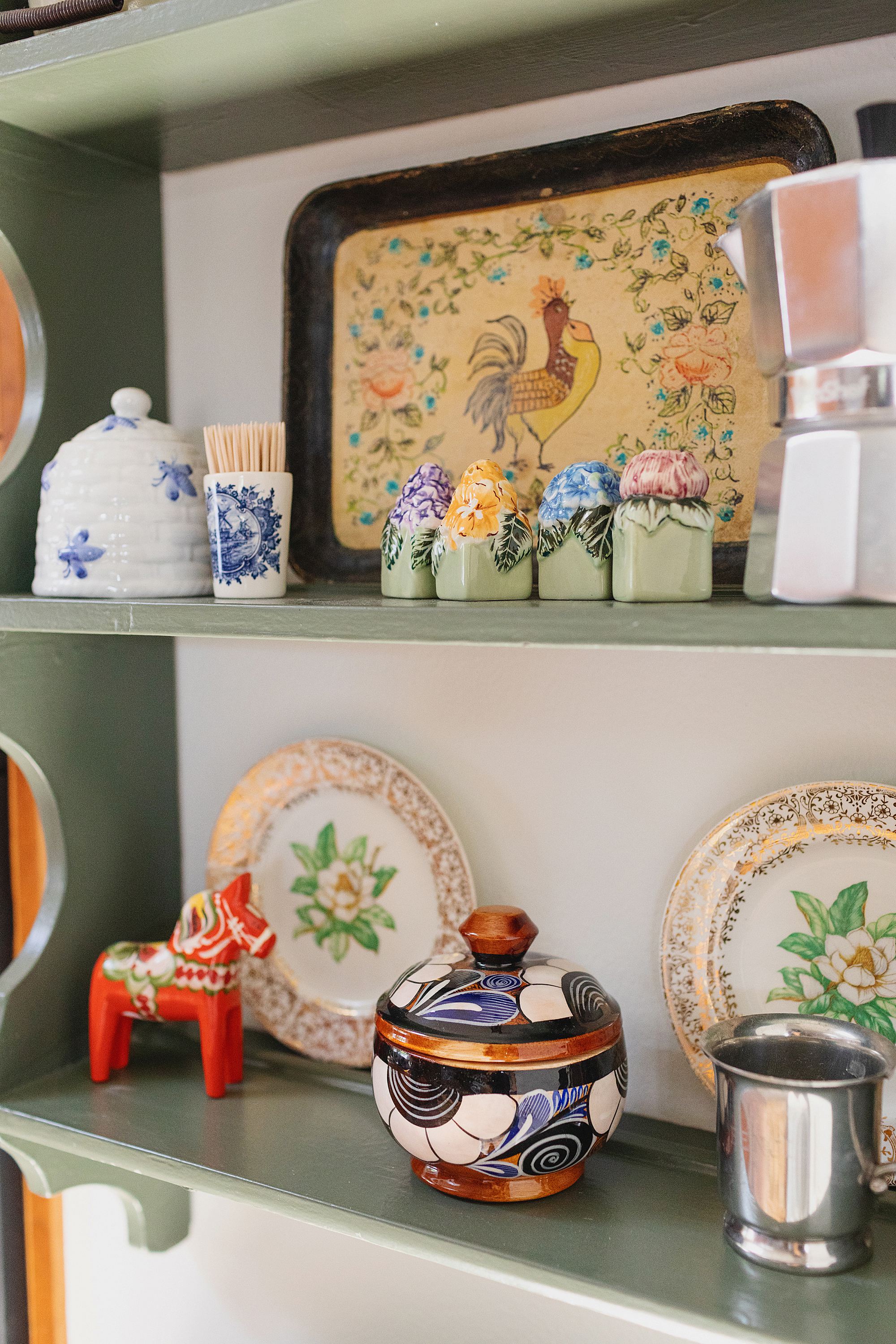 I found the floral salt and pepper shakers for $2 each at the thrift store. I’m into SP shakers now. I’ve officially crossed the line to maturity – like matuuuuuurity.

And there’s the Cuckoo clock from Switzerland that I left a pair of shoes behind so I could tuck it in my luggage. Worth it. 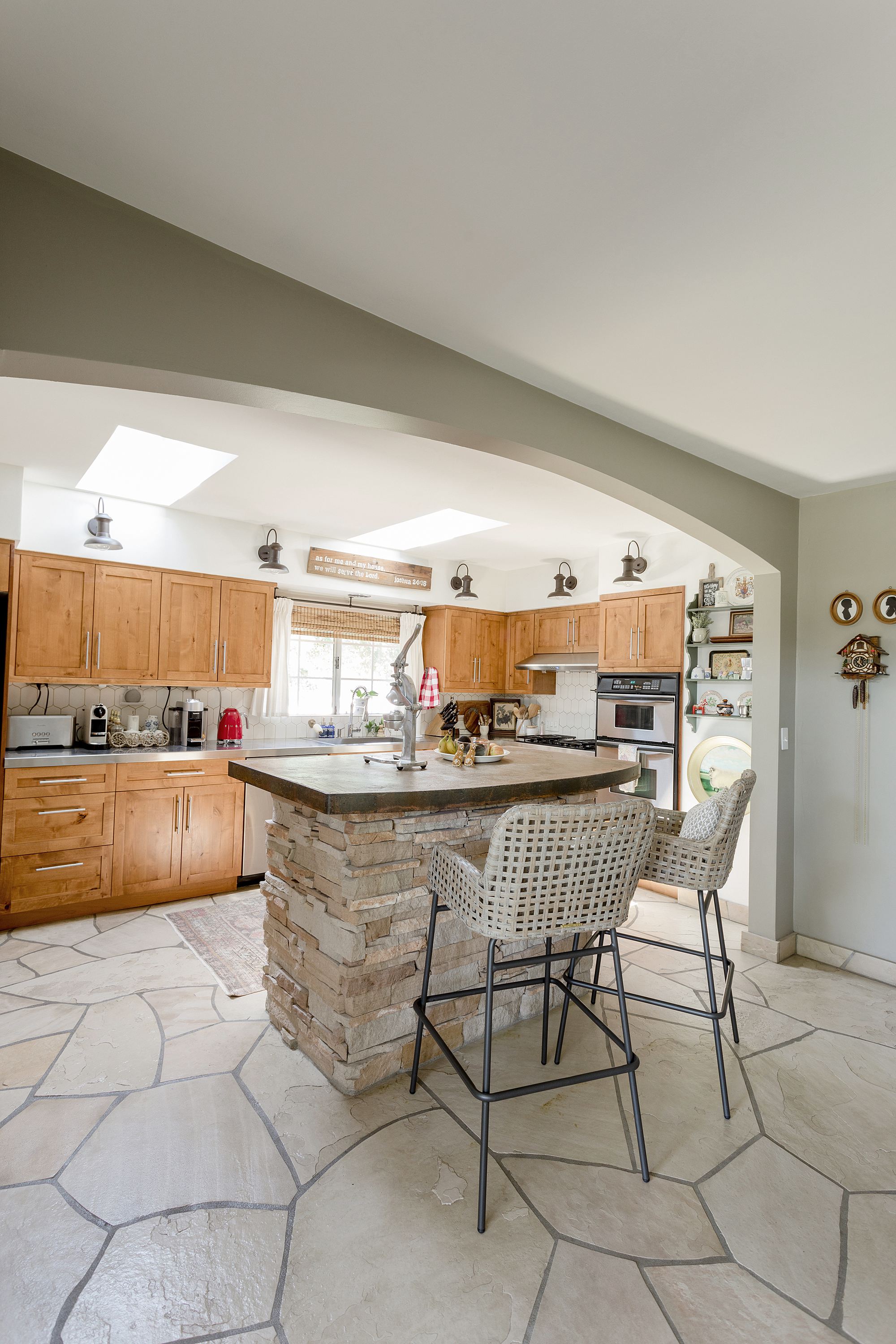 Anyway, these are the scenes around a clean kitchen. I’ve been drinking tea with milk a lot more often – it’s lighter on my tummy. I add a lavender sugar blend I made so it’s like an iced London Fog. It’s funny to think when I first bought this place I thought I’d paint the cabinets green (similar to the shelving display) and build something around the island.

Here are some more barstool ideas if you’re looking to upgrade: 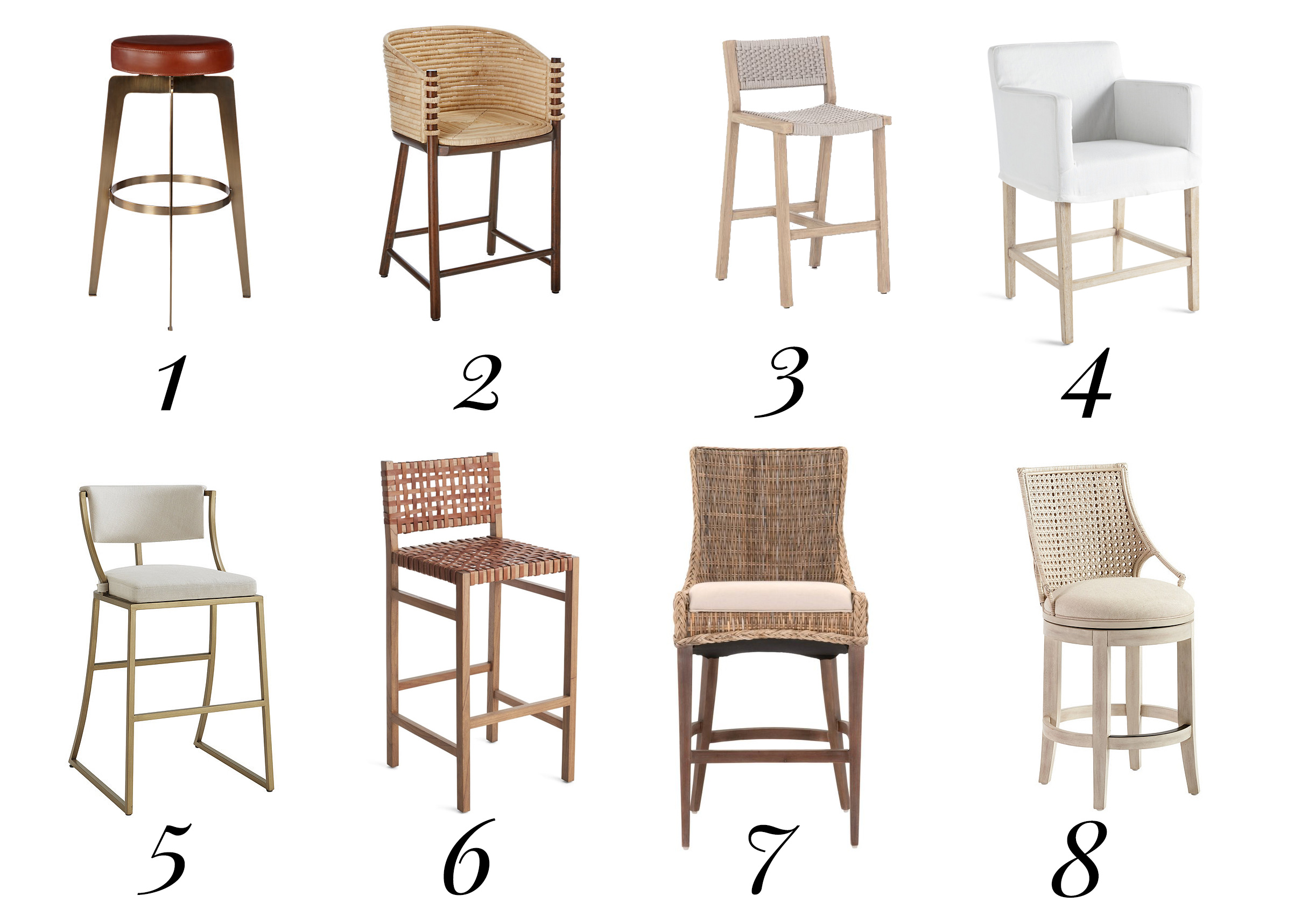 I really like the uniqueness of our kitchen, again, nothing like you see everywhere else. We’ve really grown into loving our home’s unique characteristics that give it an updated English cottage vibe. Sometimes I think your home just tells you what it wants to be. What do you think?

Diana Elizabeth realized the garage and landscape project is a reality and now she’s on a super savings spree again. Which is a good thing – because that’s what got them here to begin with. Time to get back to work!

There are no comments on Kitchen Barstools.