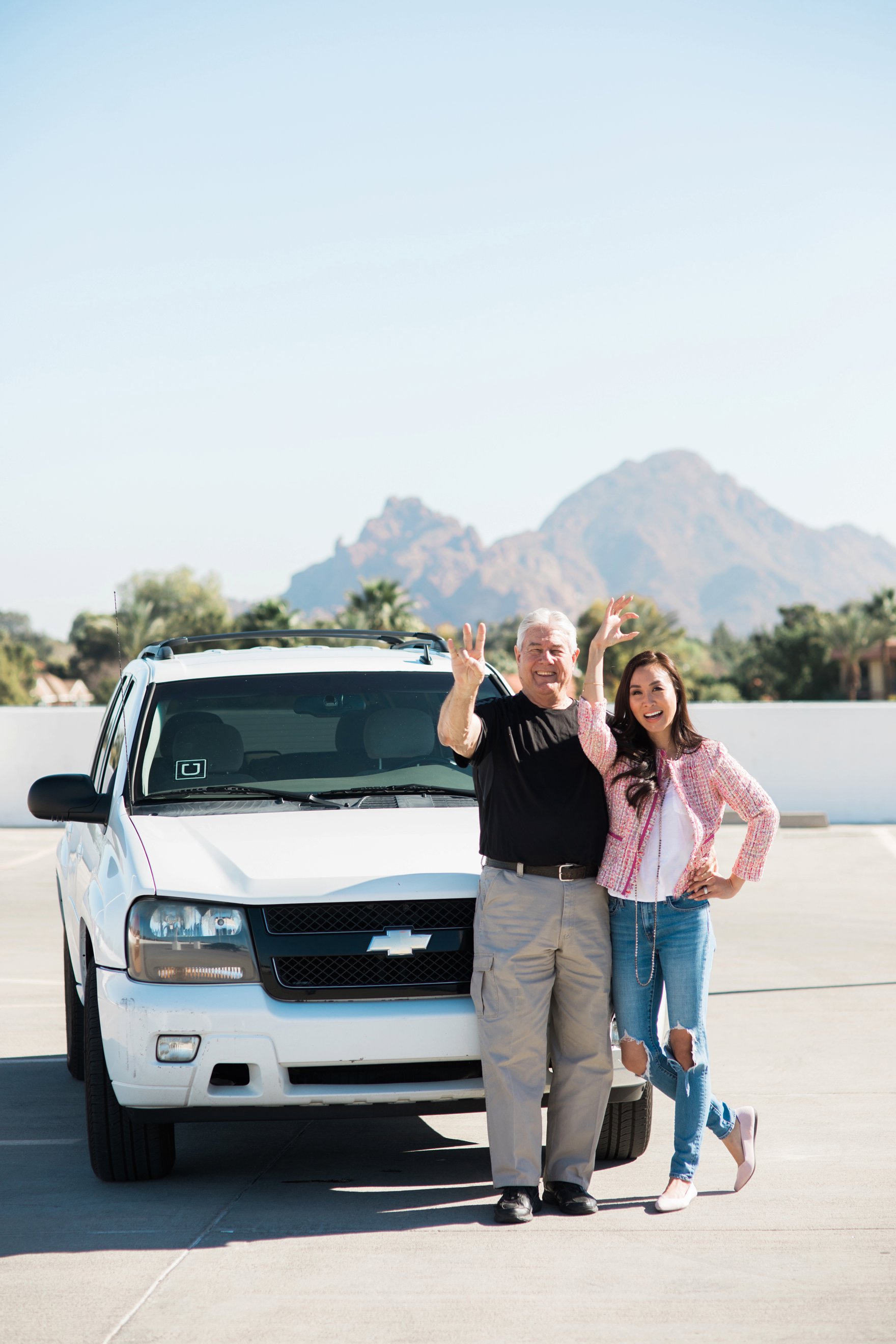 ASU Sun Devil and a UofA Wildcat posing together like buddies – your eyes aren’t deceiving you!  Meet Phillip, my new friend with the sweetest soul and a fantastic story about why he decided to become an Uber driver-partner at age 73!

He shares why he loves being an Uber driver (he completes this first year this April) and what he does with his cash tips to help others. And as you may be able to tell, we shared some laughs because we got along so well.

If you aren’t familiar with Uber, it’s a ride request app. It’s available in over 500 cities around the world – and I’ve used it this past fall in Stockholm when I had a day to myself to tour around. I was so thankful for its existence. I’ve used it in Vegas, Boston – I really have used it around the world. 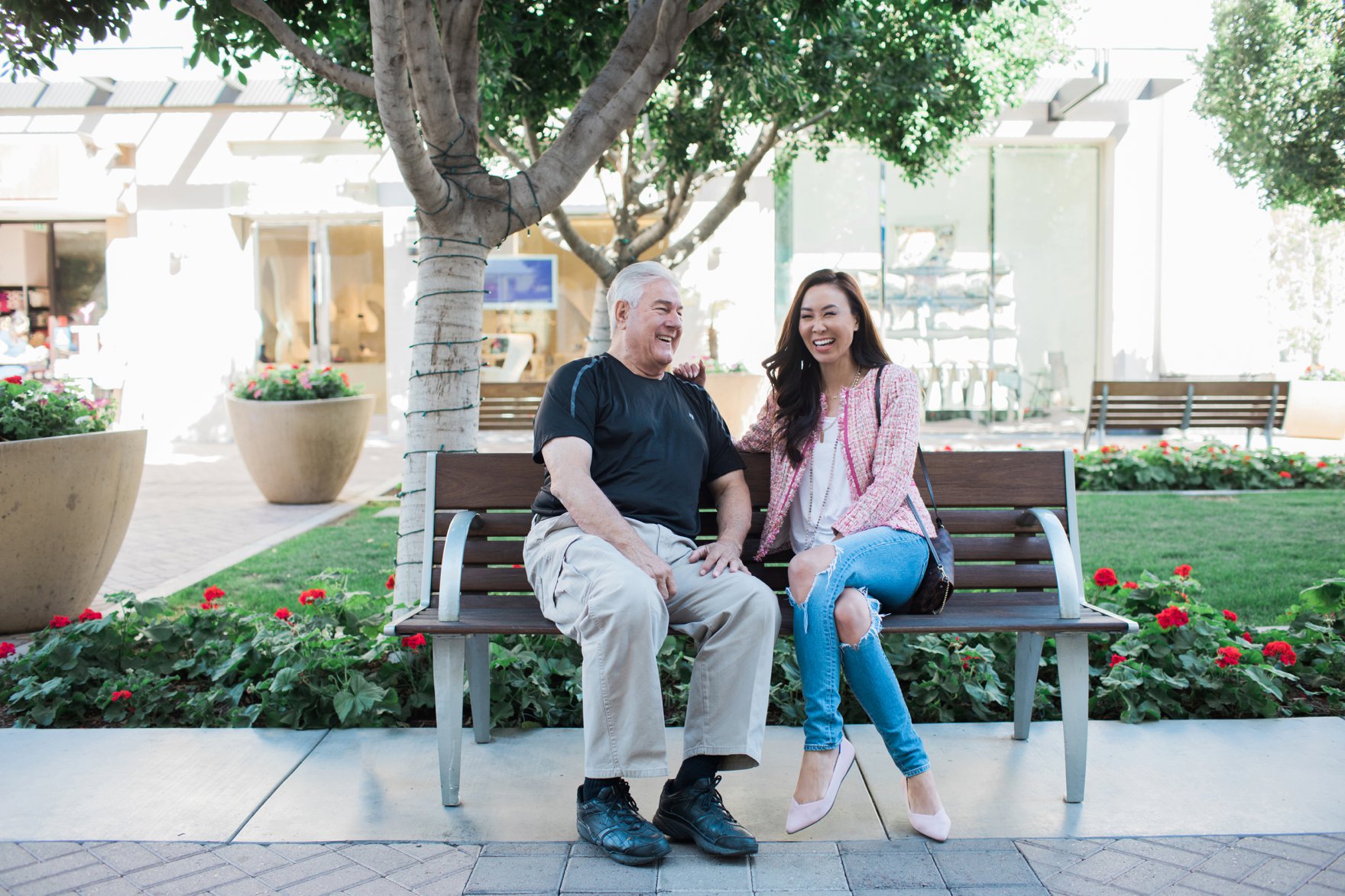 Every Uber driver-partner has a story, really we all have stories no matter what we do. I’ve often found I ask drivers how long they’ve been driving, how much they love it, and hearing their stories so I’m excited to share with you Phillip’s story with you.

Phillip was born and raised in Baton Rouge, Louisiana – with a voice that should be a movie narrator. When he was 12 he moved to San Fernando Valley, Burbank area and came to ASU to play football for coach Frank Kush. He played for two years at ASU then went back to So Cal for 40 years and worked as a Hollywood movie stunt man – he’s worked with Tom Selleck and even his son has followed in his footsteps and has been in over 200 movies including Pirates of the Caribbean.

In 2000, he moved to Arizona for his wife’s job. Phillip got a job for America West as an operations manager and retired in 2014. Once realizing retirement wasn’t for him, after 90 days he was restless and decided to go back to work for the City of Phoenix working in the aviation department for FAA certification procedures for airlines. But a few years later after turning 72 last March, he suddenly found himself forced into retirement. And since we know Phillip wasn’t a fan of retiring, he was a bit discouraged, not again! 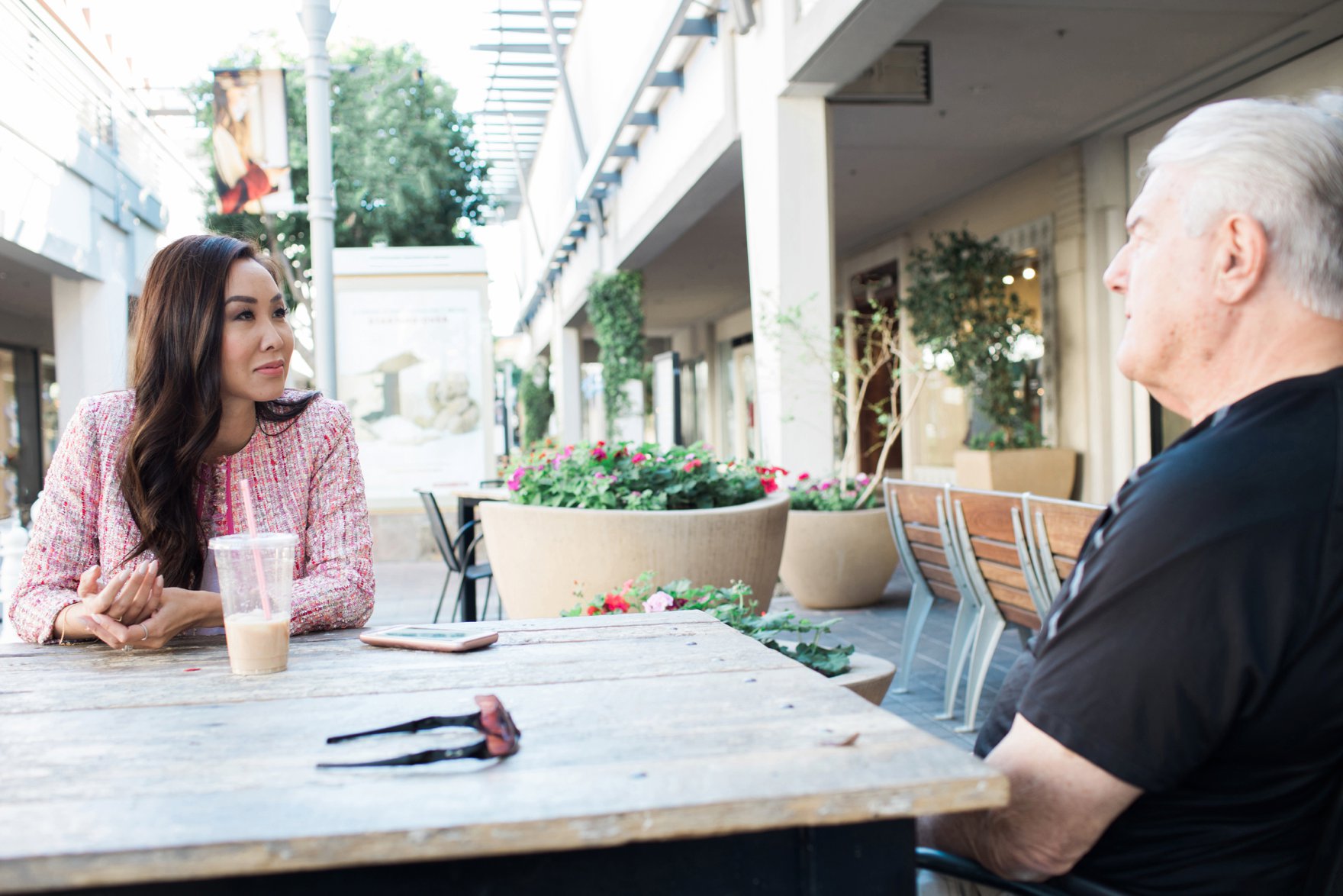 That weekend his wife asked if he’d considered driving for Uber. “(My wife) showed me the (Uber) app on Sunday afternoon  and I then thought it was an incredibly interesting application,” said Phillip. “It is the most perfect entrepreneurial application I’ve ever seen. They provide me an opportunity to be my own boss and run my own business. I have total autonomy. I can make as much money as I want to or as little money as I want to. I can determine when I work and when I don’t work. If you need to make more money, tap on longer. To me it was perfect.”

Uber is the most perfect entrepreneurial application I’ve ever seen. They provide me an opportunity to be my own boss and run my own business. I have total autonomy. I can make as much money as I want to or as little money as I want to.

“Monday morning I got up, took my car and had it detailed. On Tuesday I went down with my insurance, drivers license, and got a background check – and on Wednesday I was driving for Uber.”

By Wednesday he felt good to go and was excited about going. He said they have great customer service; they are great with offering training programs, answering questions and being a great support for drivers.

“I’m excited about getting up every morning.” He loves meeting interesting people – he says everyone has a story. People give him cash tips and when he sees people who hold signs who need help on the side of the corner, he takes $2 out of that tip money and he gives it to them. Explaining the reasons he quoted scripture, “Freely I receive, freely I give.” 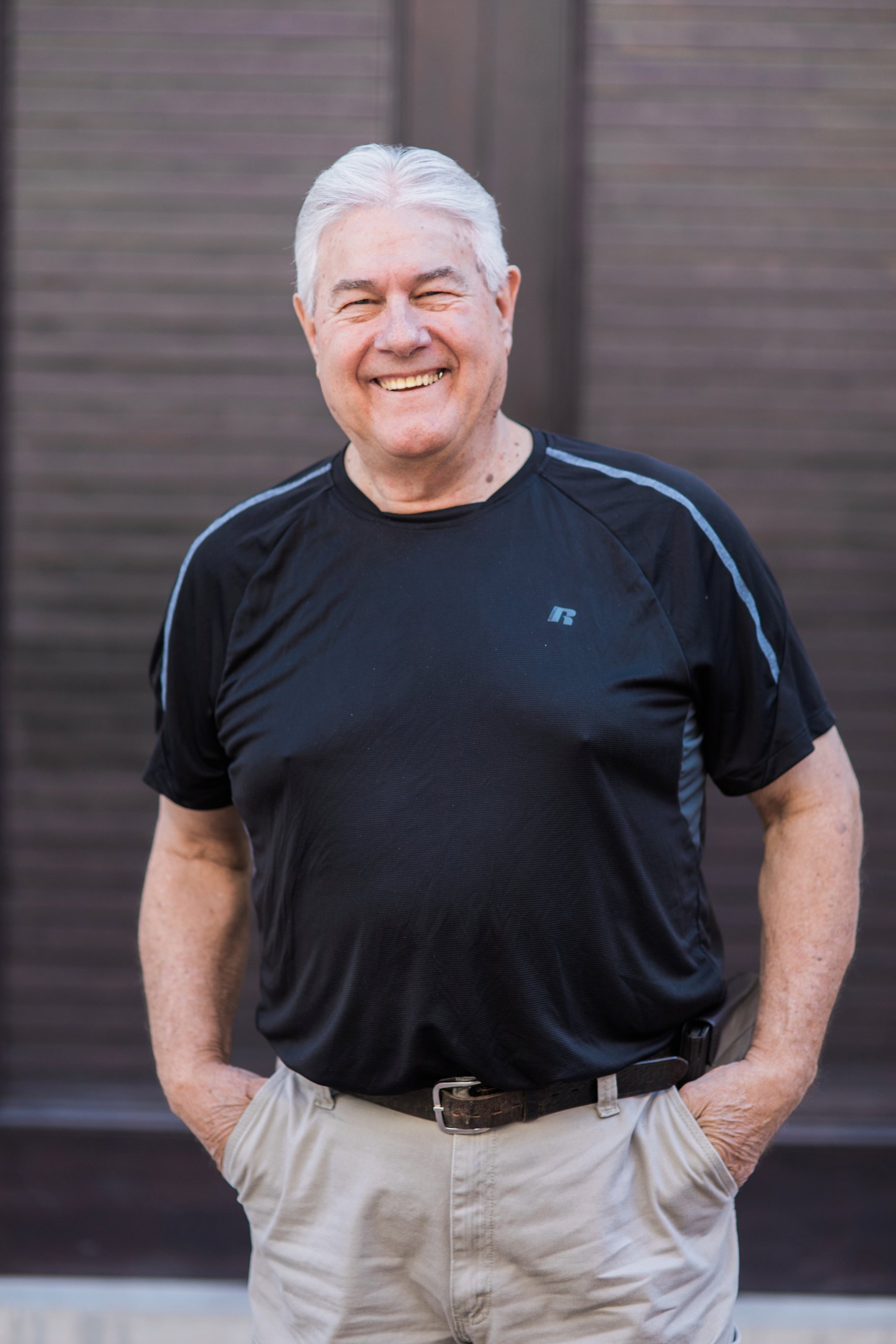 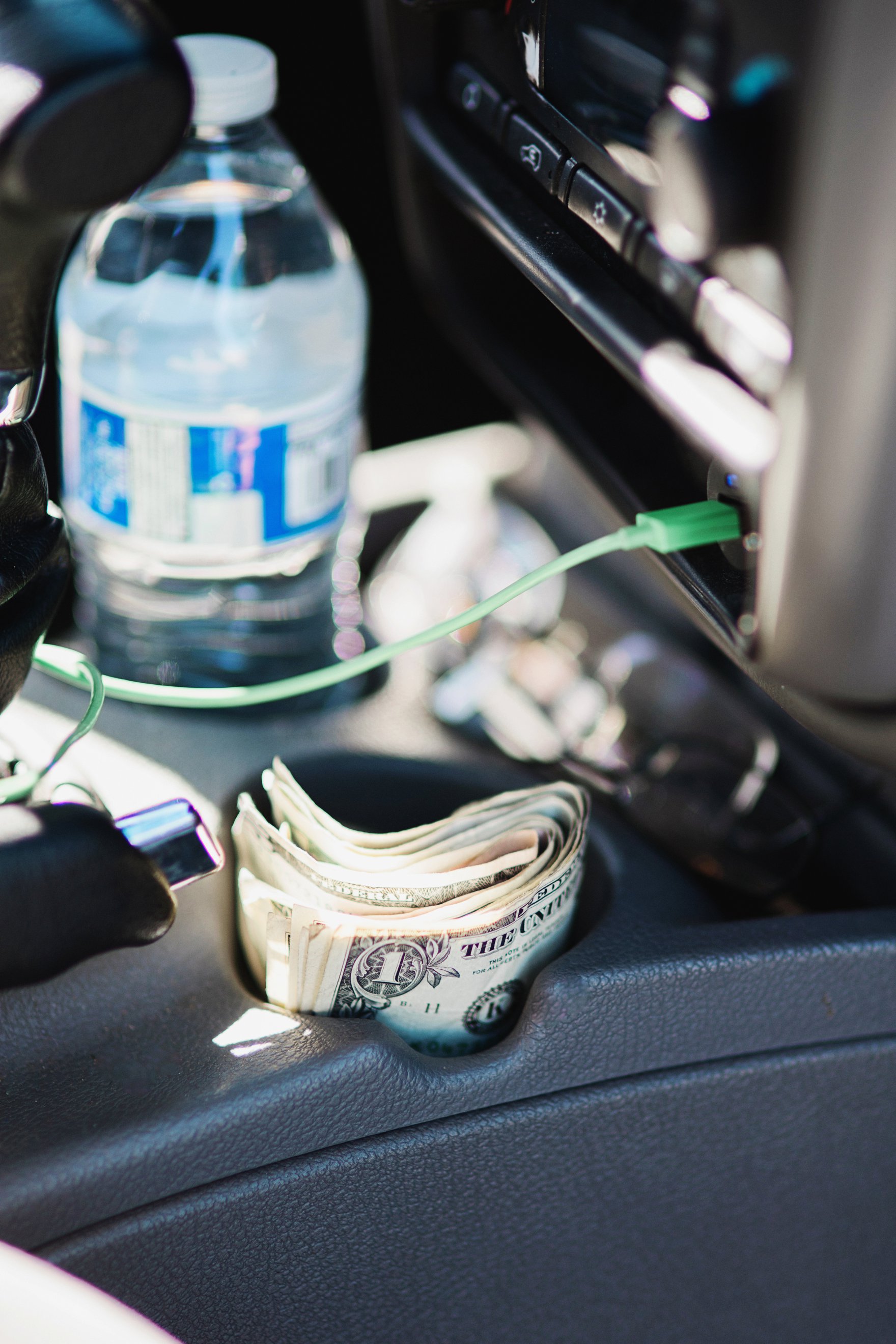 That’s Phillip’s cash tips which he gives out to those in need as he drives by.

If you’re interested in signing up to be an Uber driver-partner, Phillip has some advice.

Advice from Phillip for Uber driver-partners 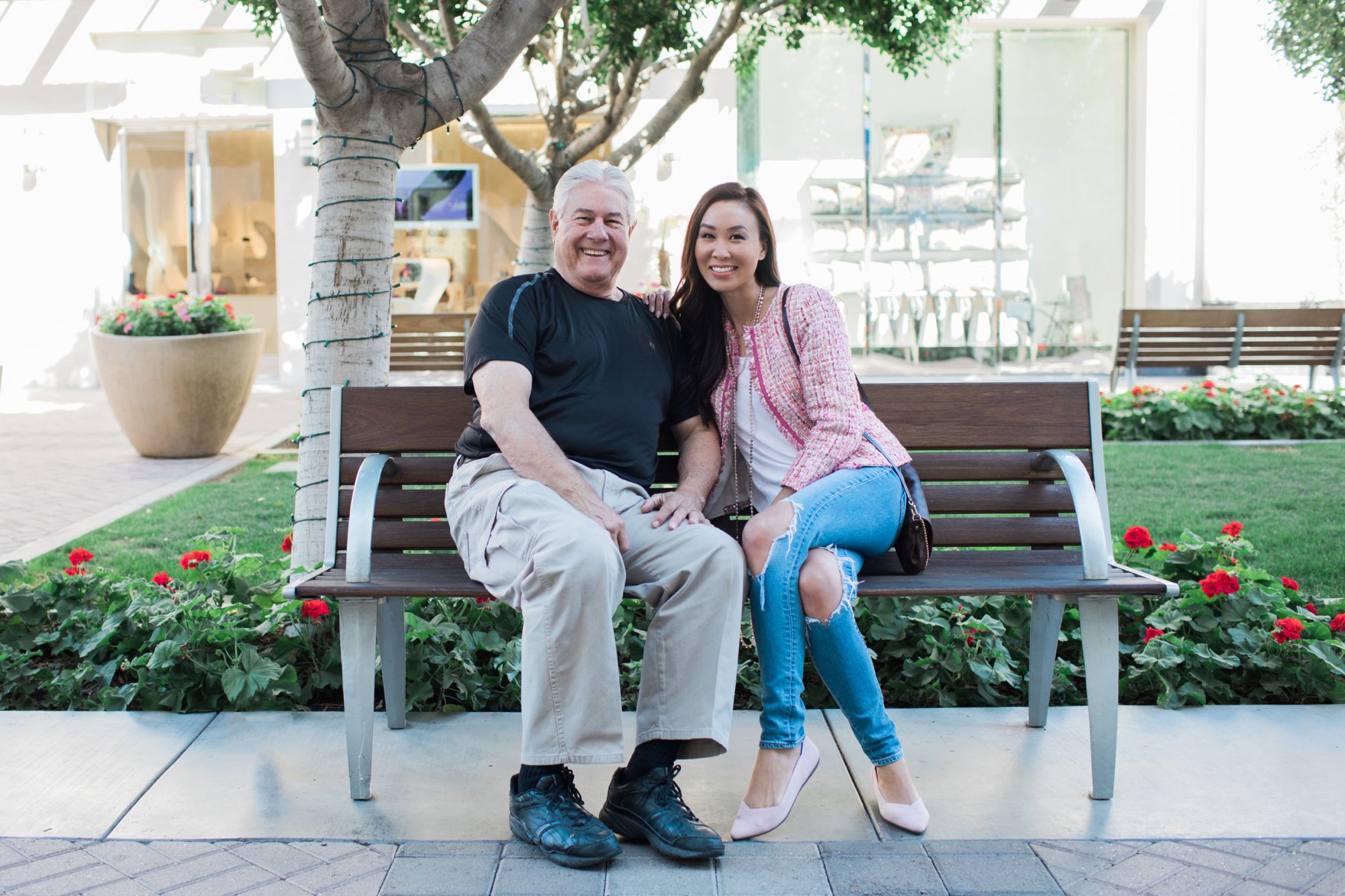 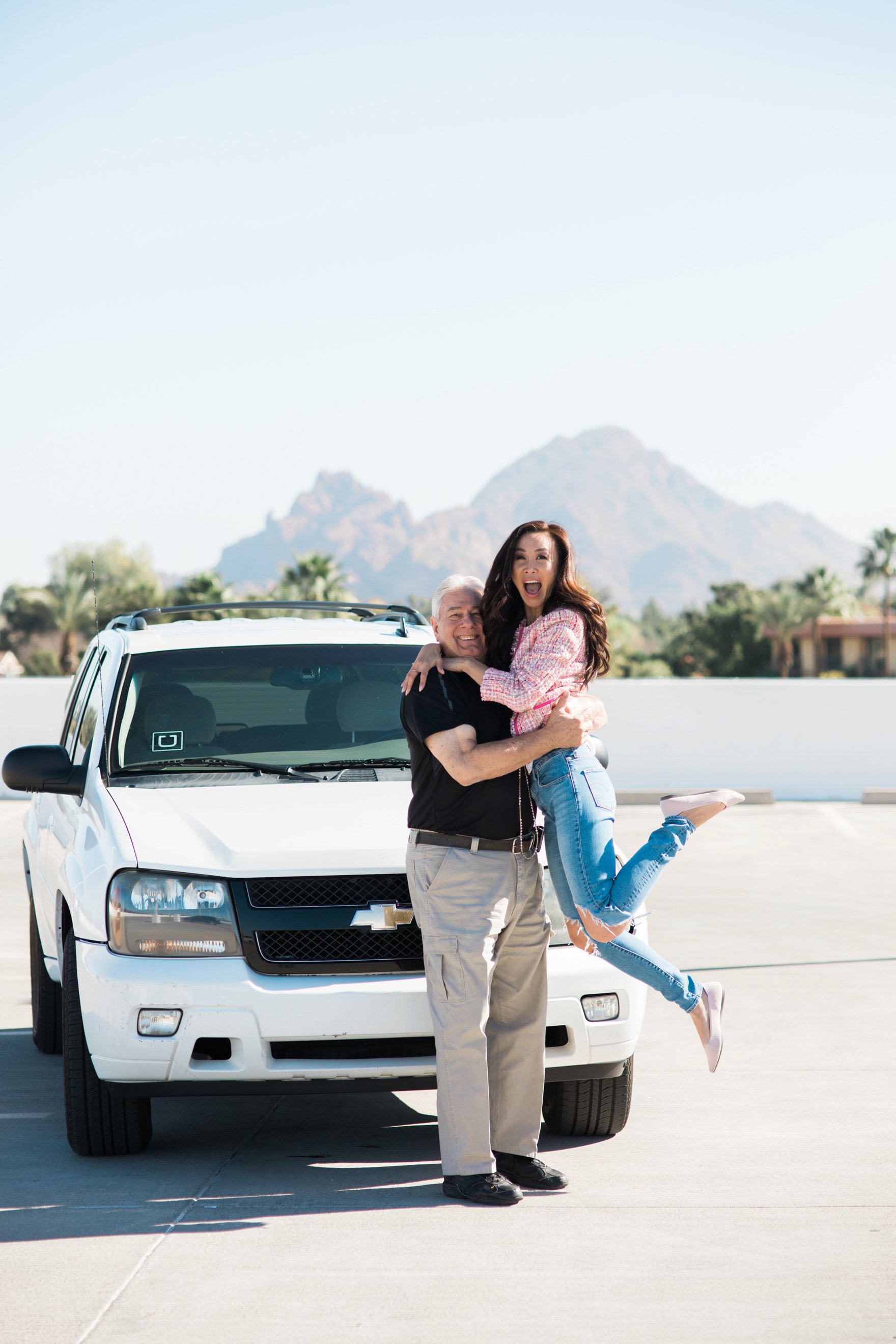 As you can tell Phillip and I had a fun time chatting over coffee. It was difficult to say goodbye but I know that it wasn’t goodbye forever, Benjamin had a blast too! I think these photos before we parted speak for themselves!

I hope you all have a wonderful day and the next time you get in an Uber have fun getting to know your driver-partner and their story!