Last Saturday’s garage sale was decent.  The same gal always makes the most because she brings the designer stuff in, and she is a purse hoarder, it cracks us all up.  Then there’s another gal who always prices her stuff just right to get that good amount in.  And then there’s me who announces everything is a buck and I only  made a little over $100.  Womp womp.

Mr. Wonderful said, “Wasn’t the goal just to get rid of your stuff?”  Yeah, but I really wanted more money because gosh darn it, I’ve got things to buy.   On the other hand, I got to hang out with my girlfriends on a Saturday which is always fun.

After the sale was done, I loaded up the car and donated the rest of the gal’s things that didn’t sell – about seven bags and boxes to Hospice’s White Dove Thrift Shoppe.  I love their store – I love it because I love the organization and what they do.  It’s guilt free donating and buying because you’re giving to a cause that we might all one day need.

Hey, guess what I finally finished? My first knitting project! 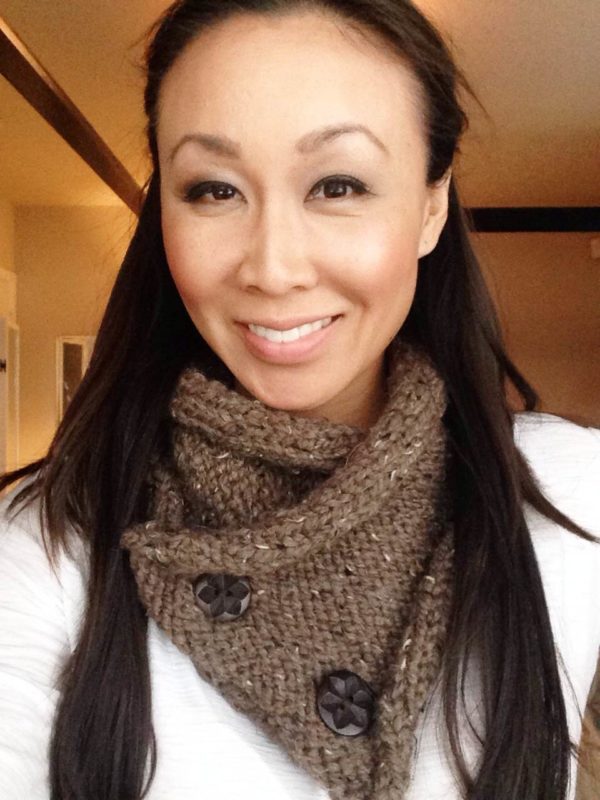 I don’t deserve to many oohs and ahhs because its fruition was somewhat accidental.   I was doing the stockinette stitch (like little hearts) and my scarf kept rolling.  No one told me that stitch causes that.  So, I decided a cowl was better.  I did knit button holes after watching a YouTube video several times.  Then buttons from Etsy, ta-da!

I think that’s what you do with creativeness, you somewhat improvise or try to see what else you can do with what you have already created.  Nothing always turns out really the way we want at all, does it?

On another note, I’ve been pruning and planting in the backyard.  I fell over in a garden bed, like hard core that it left a big dirt mark on my knee that I frantically looked around to see if anyone saw.  I hope to show you the progress soon but more details on what I’m doing will be on The Heirloom Home.

Another week gone by, can you believe it?  Tomorrow’s March! I hope you find time to relax!

Diana Elizabeth is now onto her second knitting project.  She then discovered a new way to slip a stitch to make the ends look prettier.  This is after she completed 20 rows of seed stitching that she now wants to rip it all apart and start over.  So typical.

There are 5 comments on This week.