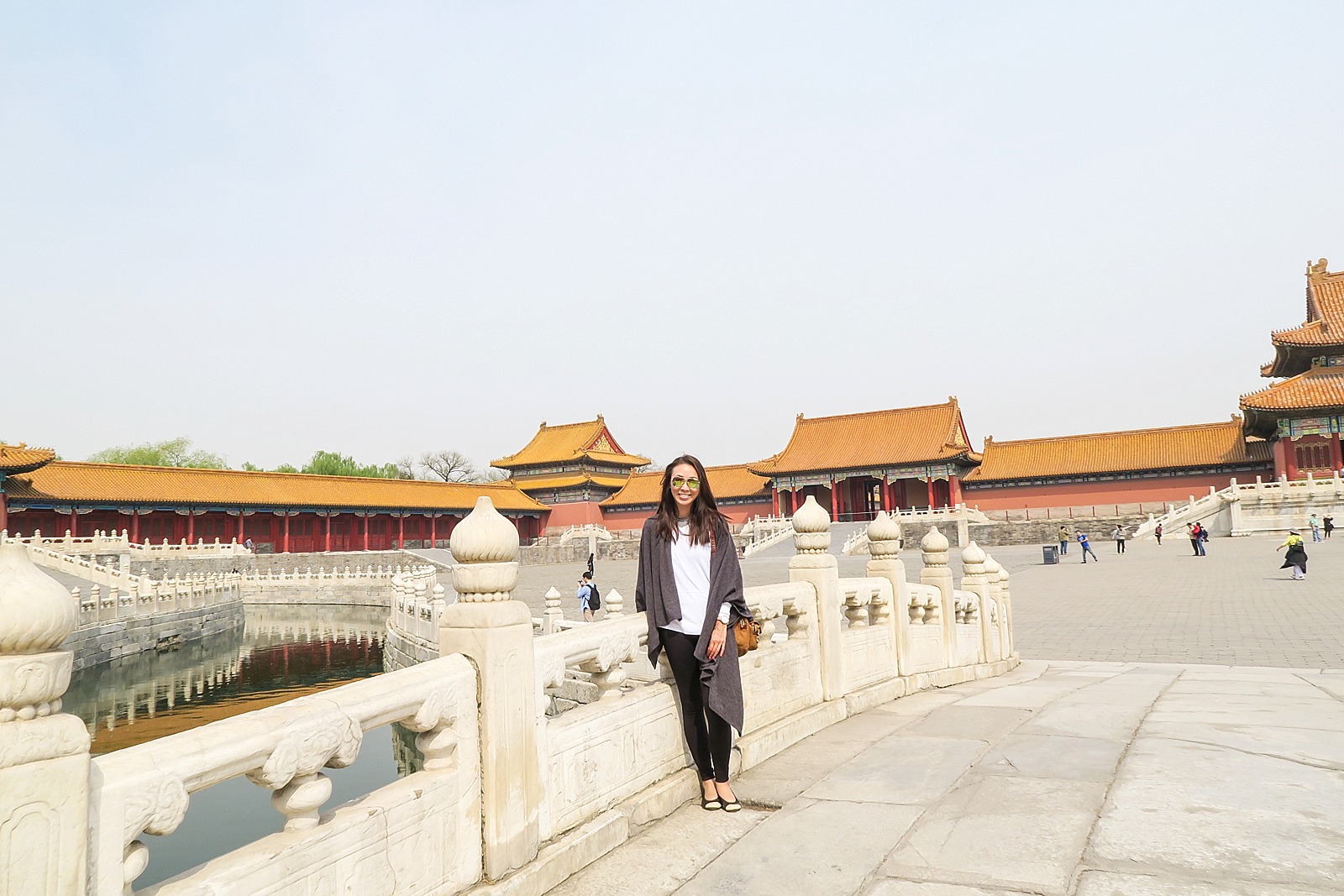 After Thailand, we had a layover in Beijing for 8.5 hours. To me, that’s really like 4 hours considering the time it takes to get in and out of customs. Rachel and I discussed what we wanted to do during that time – do we chance it and go somewhere? Where do we go?

Visiting the Forbidden City meant a lot to me because my great grandfather on my dad’s side was one of the tutors for the Last Emperor of China.

Have you seen the movie The Last Emperor? It’s a fantastic movie about the final Emperor of China, sad but a great drama and I highly recommend it, it is almost a 3 hour movie just FYI.

If you stop in China, you have a free 72 hour Visa. You don’t have to apply for it, you just need to show you have an outbound ticket within the 72 hours. 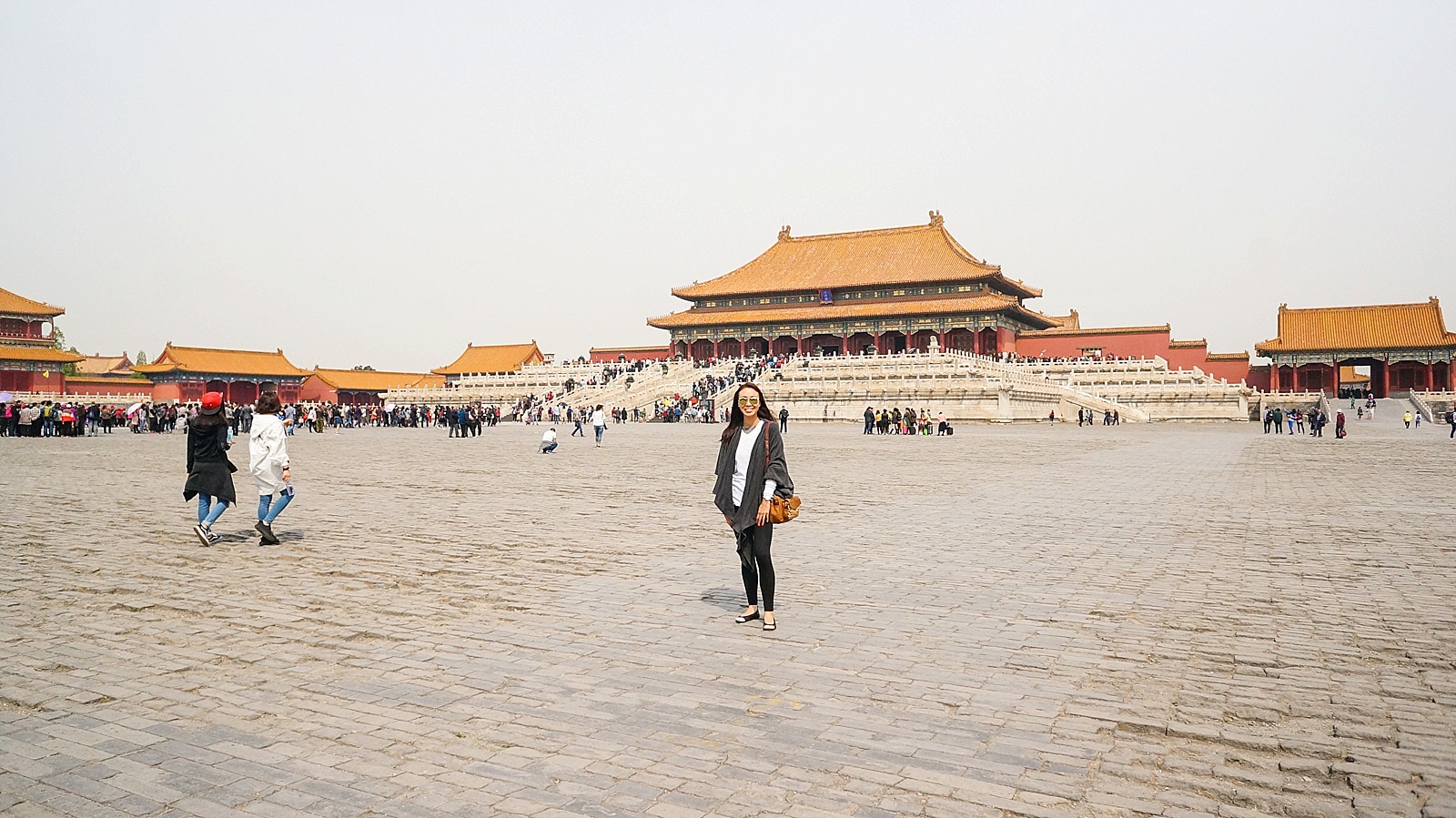 When we made friends during our Thailand trip, we head about Beijing Layover Tours and people were going to the Great Wall. I would suggest doing a tour after what Rachel and I experienced – getting ripped off by our taxi who wasn’t really a taxi with a real meter, and mass confusion. I suggest going with a legit taxi with a taxi sign and meter or a desk that offers taxis – do not go with any man with a sign or printed card with his rate, you will overpay at least 3x, like we did.

I’d like to brag that my child level Mandarin got us places, and it did for a good while. Rachel said there was no way she could have gone anywhere or survived if she were alone – but remember, we decided to do this with no help. If you have a tour, you’ll be fine. There was an opening to the Great Wall (we truly didn’t believe they would get back in time and in fact many of them had to run to the gate but they all made it!). Rachel said the choice was up to me, go with the group or go on our own to see the Forbidden City and when I didn’t know what to answer, she said, “Let’s go to the Forbidden City, I know that means more to you,” and I am so thankful for her willingness to do that because I know she really wanted to see the Great Wall.

We were dropped off at Tiananmen Square – a large city square in the center of Beijing. 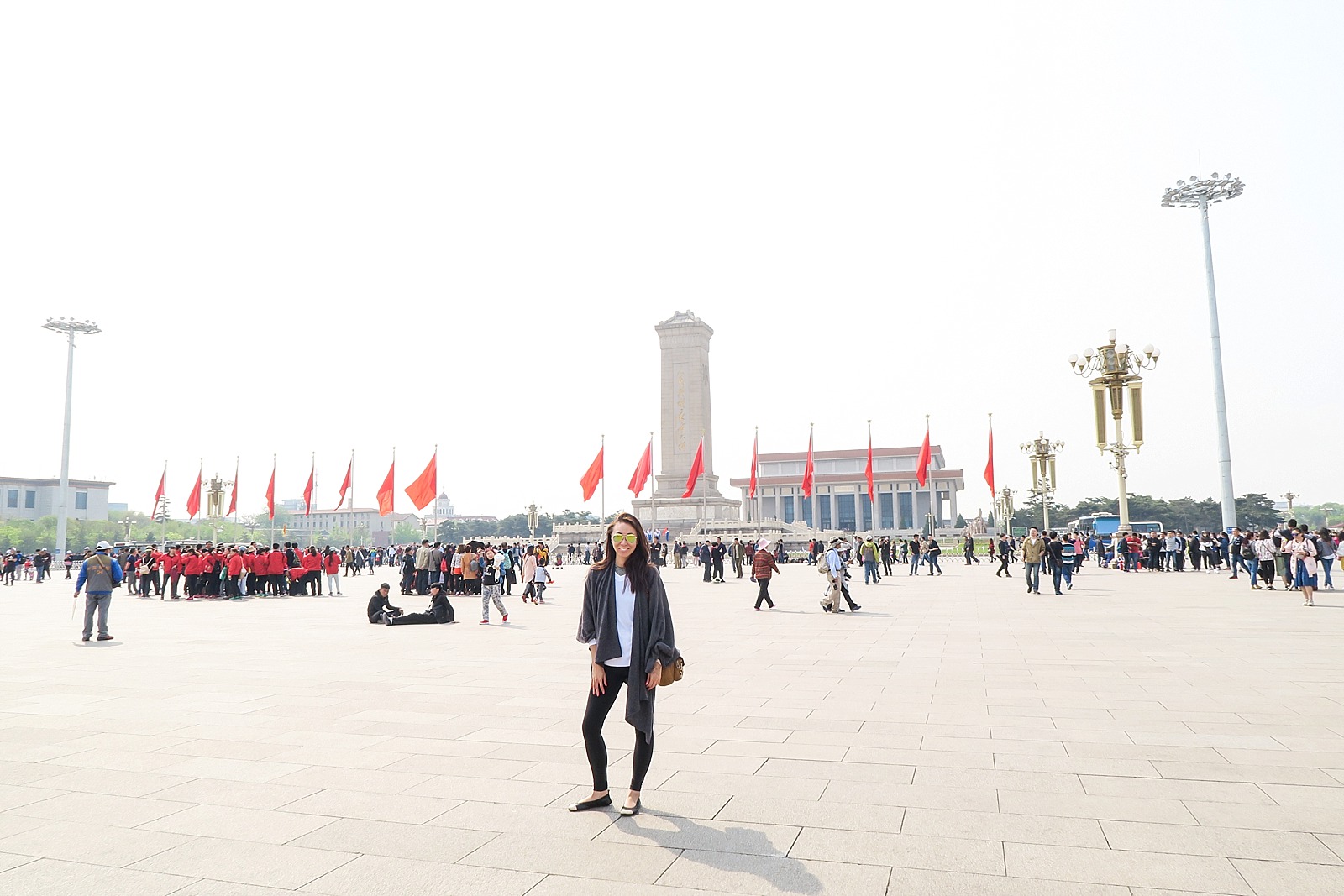 We weren’t quite sure where we were going, so we just continued to walk toward the Forbidden City – 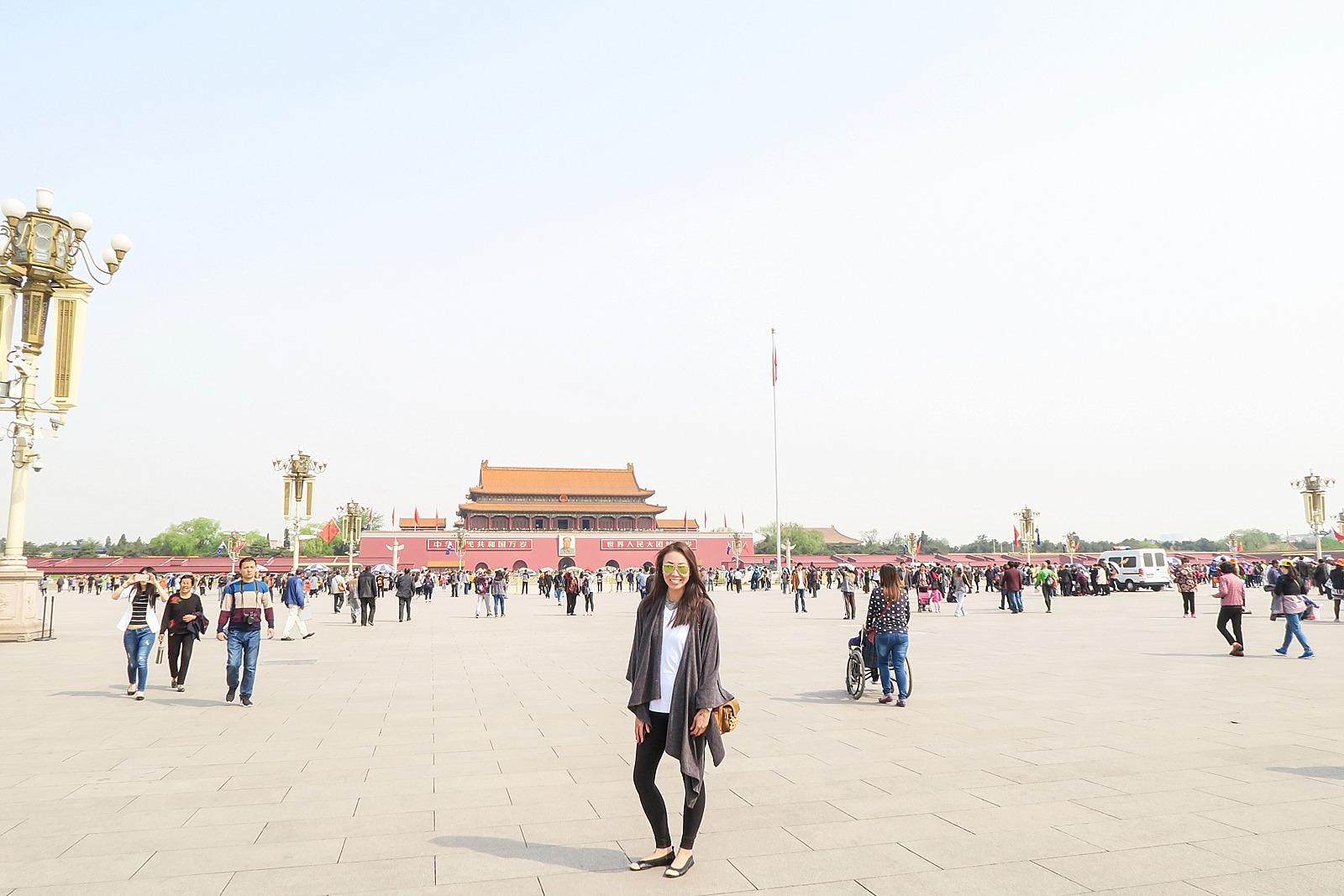 We just kept walking with the crowd not know where to get tickets, and then we went in, and then saw the ticket line, there were many open windows which was great – short lines. Cost was $10. 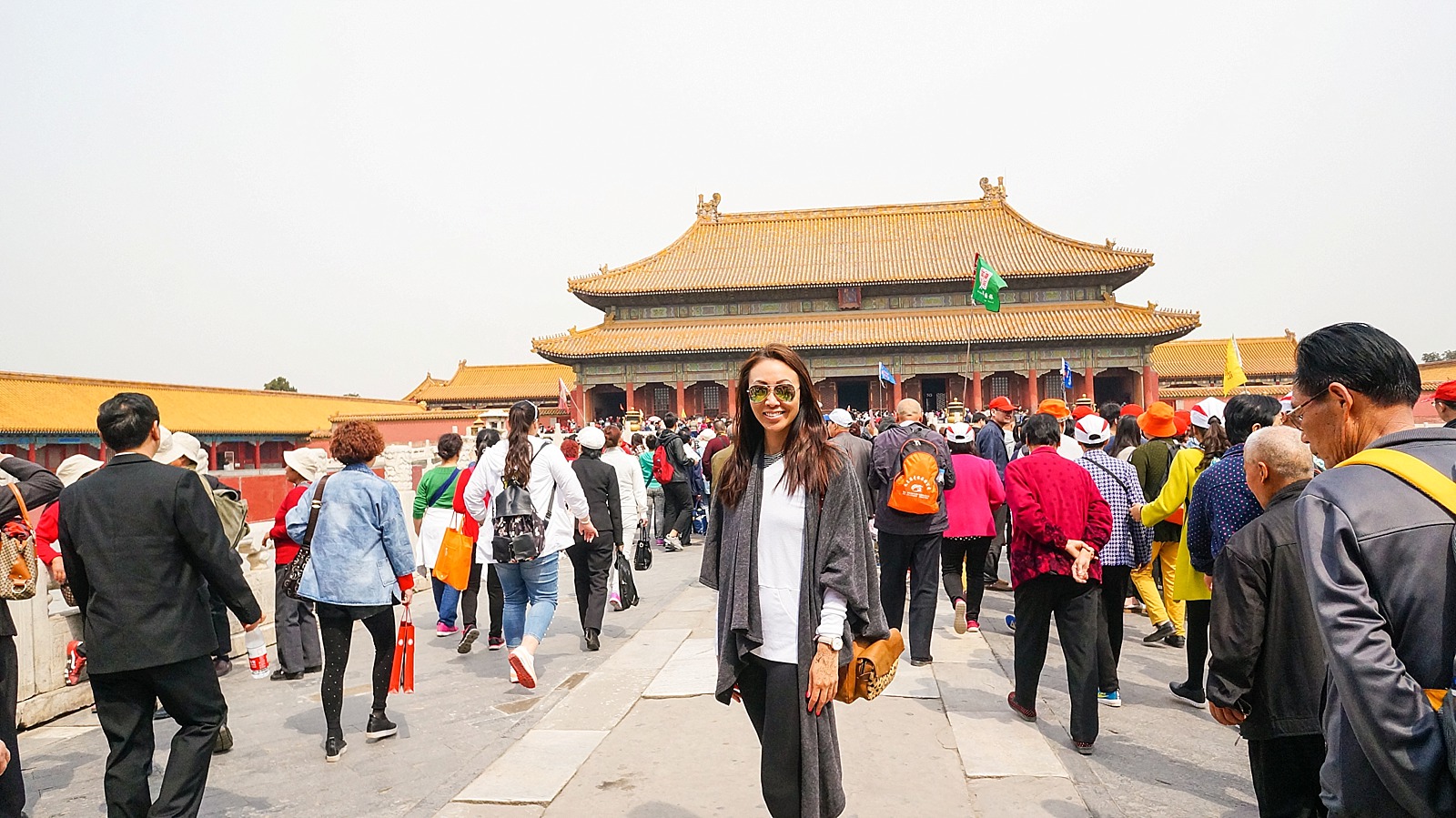 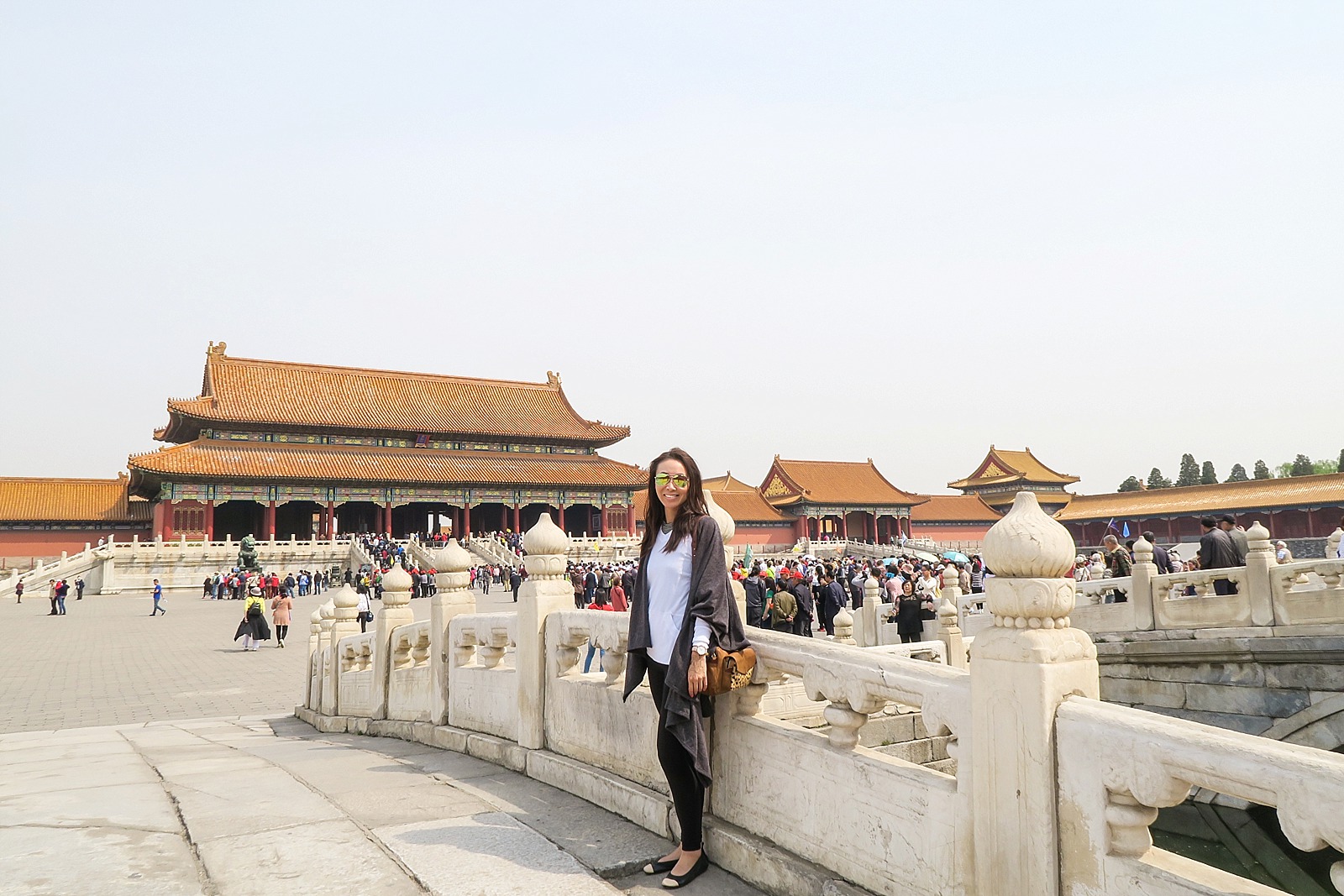 I was so excited and happy to be here, I had so much wonder and just love knowing more about the culture of my ancestors. I’m sad to say that I didn’t embrace who I was until I was in college and since then I’ve never been ashamed to say – I’m full Chinese! I love my roots and I’m proud to have the Chinese traits of hard work, efficiency and being ageless. Haha!

Of course the actual culture in China is very different than America, it’s just different – it’s Asia after all and it’s a different country and people have different life experiences here. If you can’t accept that everywhere outside of America isn’t America, you might be uncomfortable traveling.

Here’s the first really big entrance of the Forbidden City. 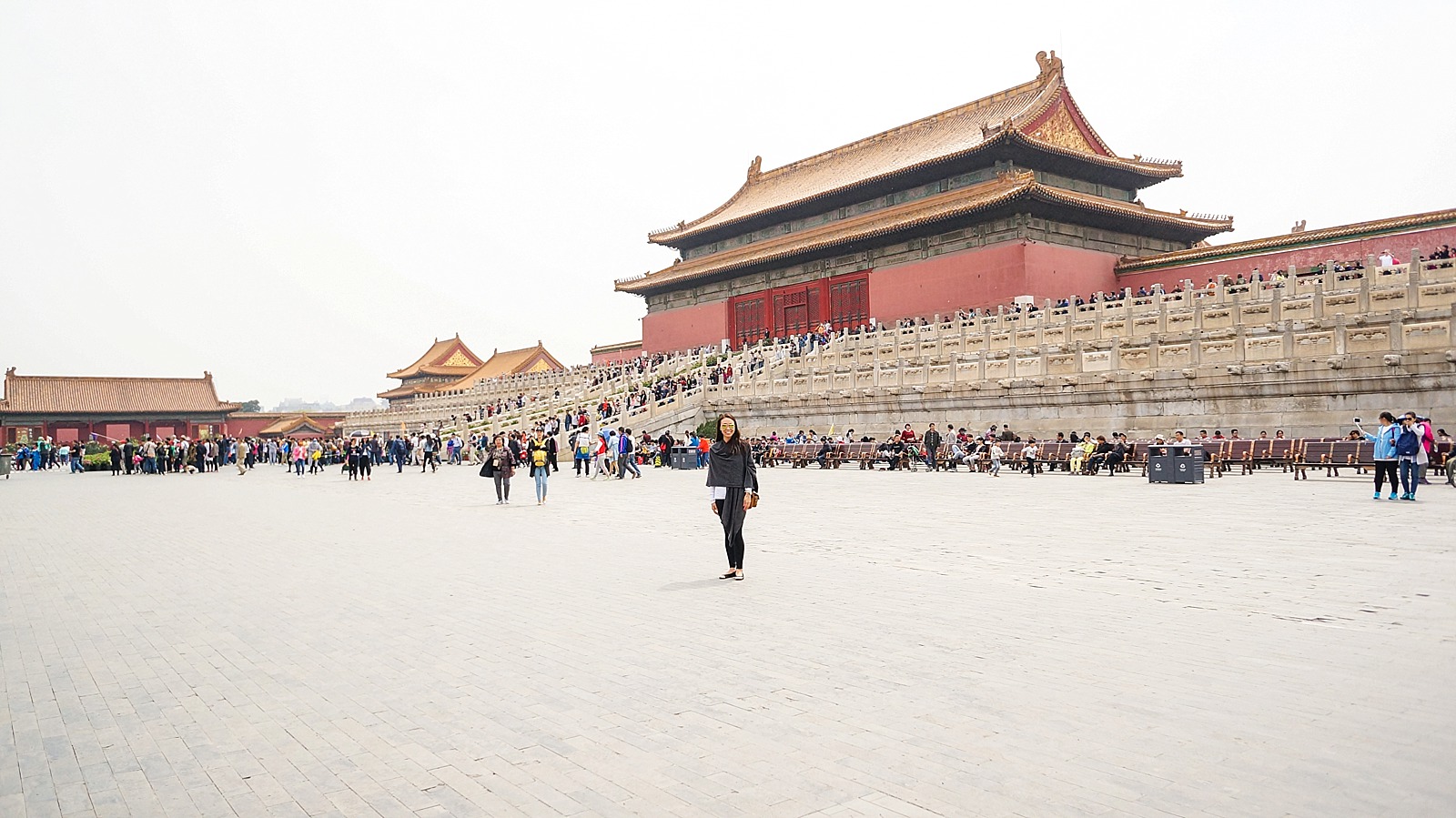 You actually couldn’t go through it, you could only see this – 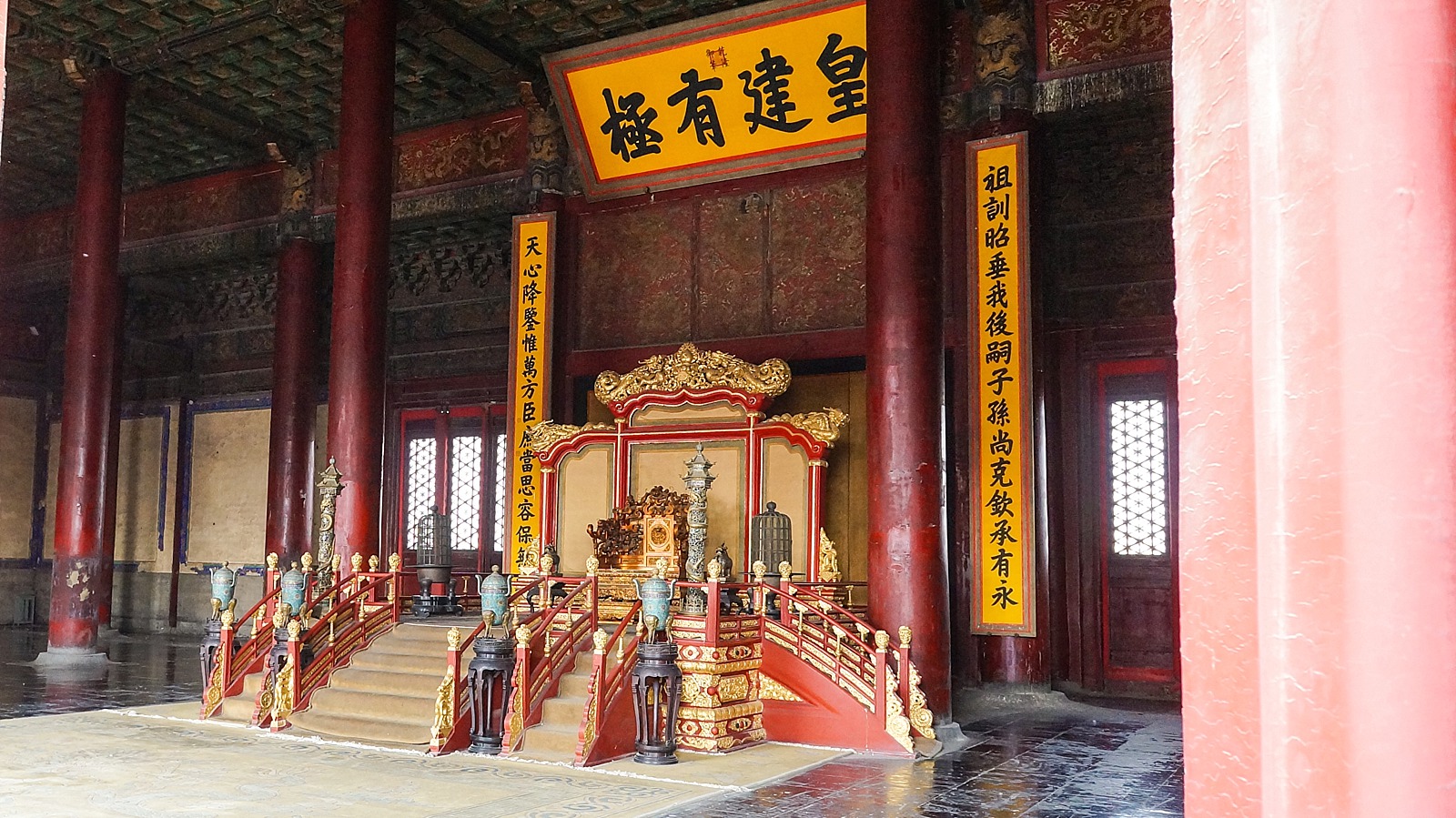 A throne – in the Hall of Preserving Harmony.

Let me just show you how big the Forbidden City is – 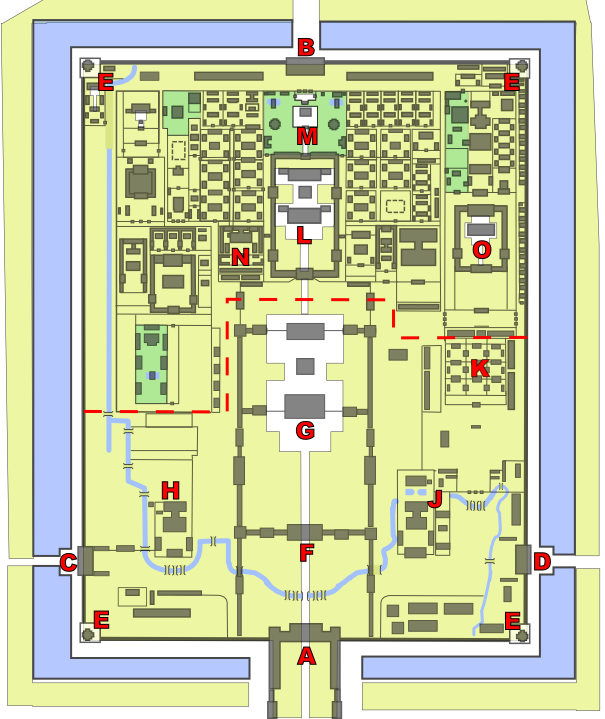 Here I am in the garden, had to take a picture of course! 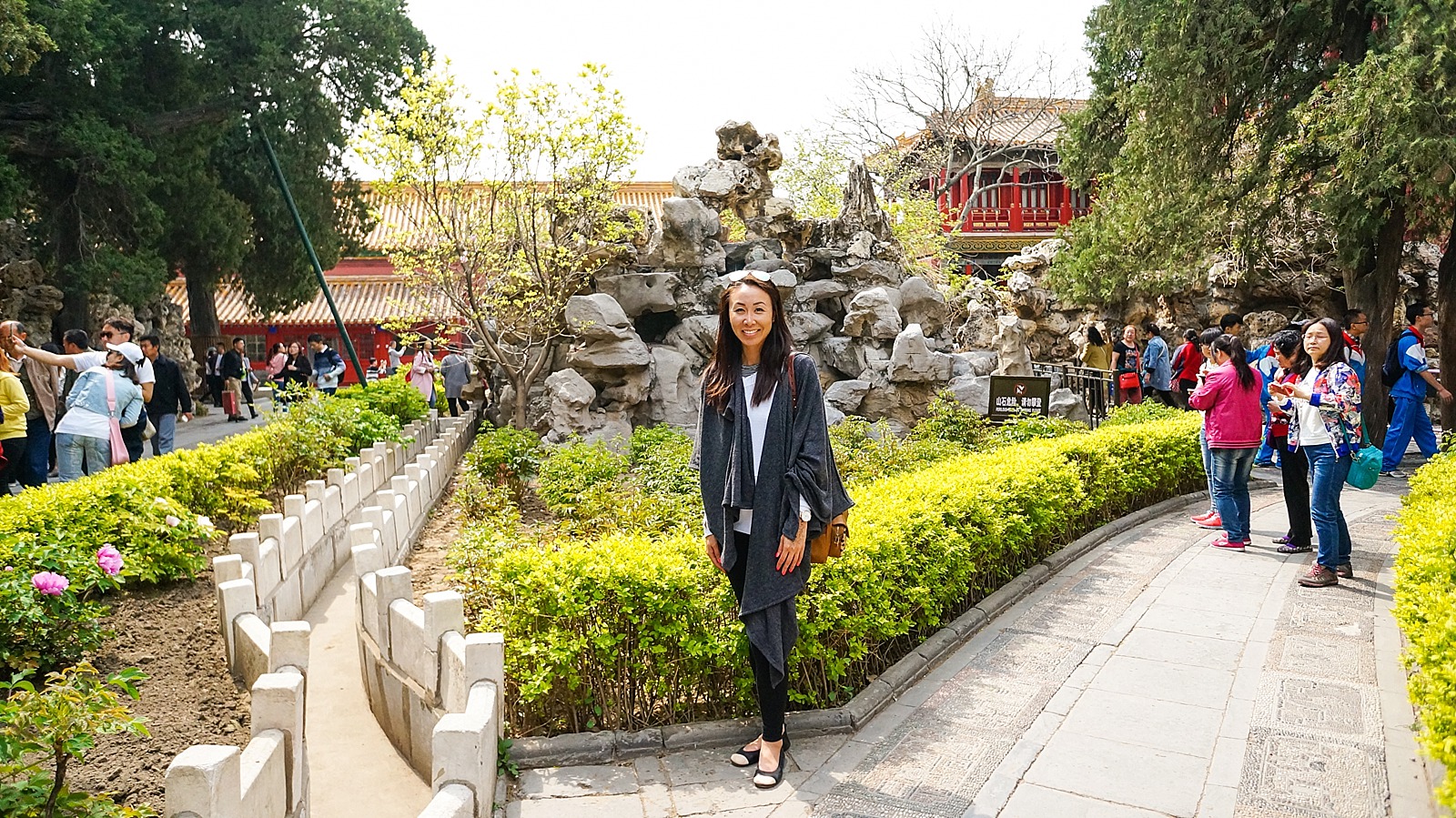 Then I found a gift shop – there are many on the grounds, there have to be when you think about it.

I came across an artist who paints inside glass jars and beads! A large vase like the goldfish one you see below on the right can take 20 days! 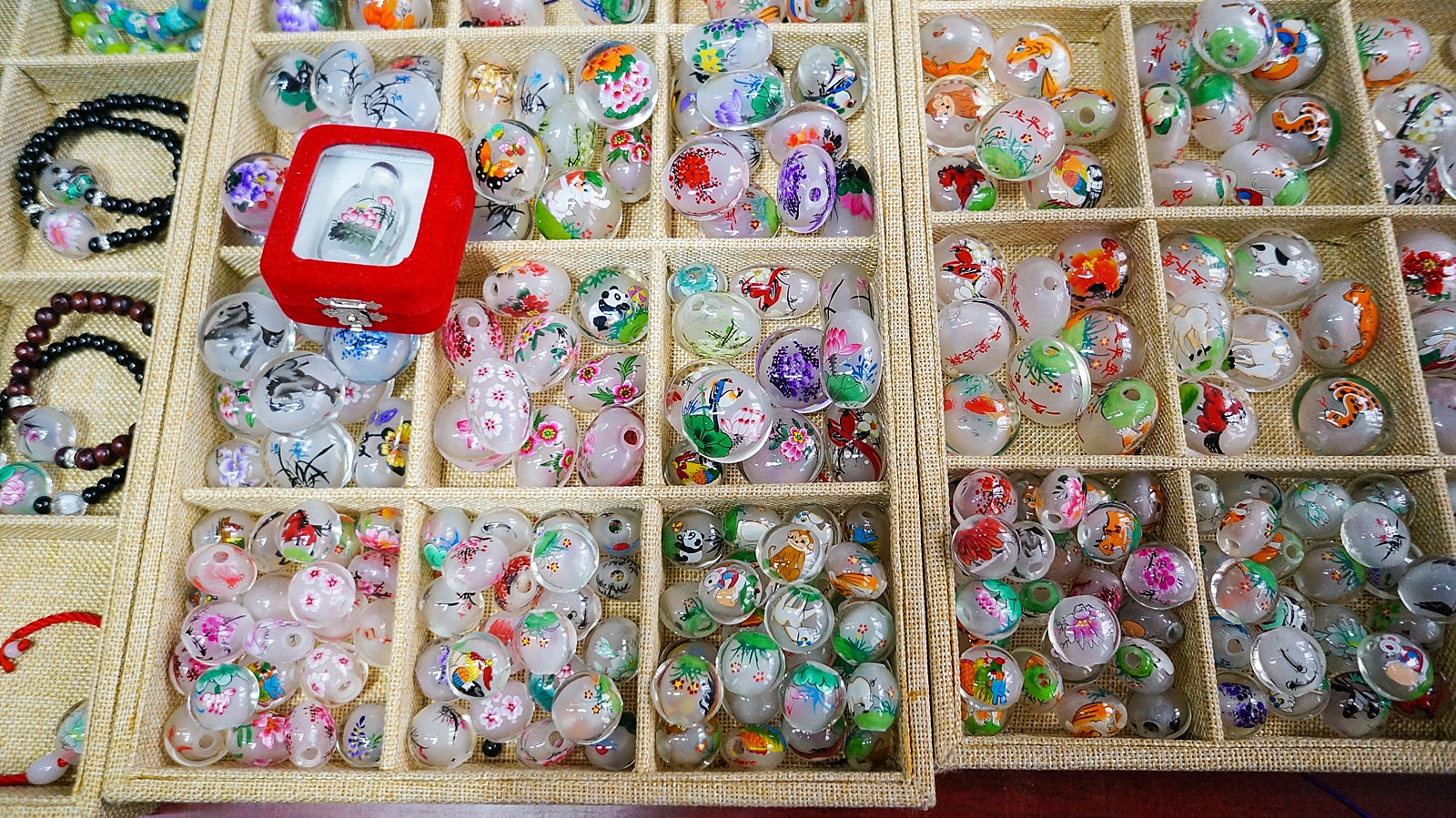 I had him make an ornament with a dragon and rooster since that’s Benjamin and my Chinese zodiac sign and write our names on them. I love gifts made by local artisans, they are perhaps my most favorite gifts to purchase.

We spent two hours in the Forbidden City and had to head back. 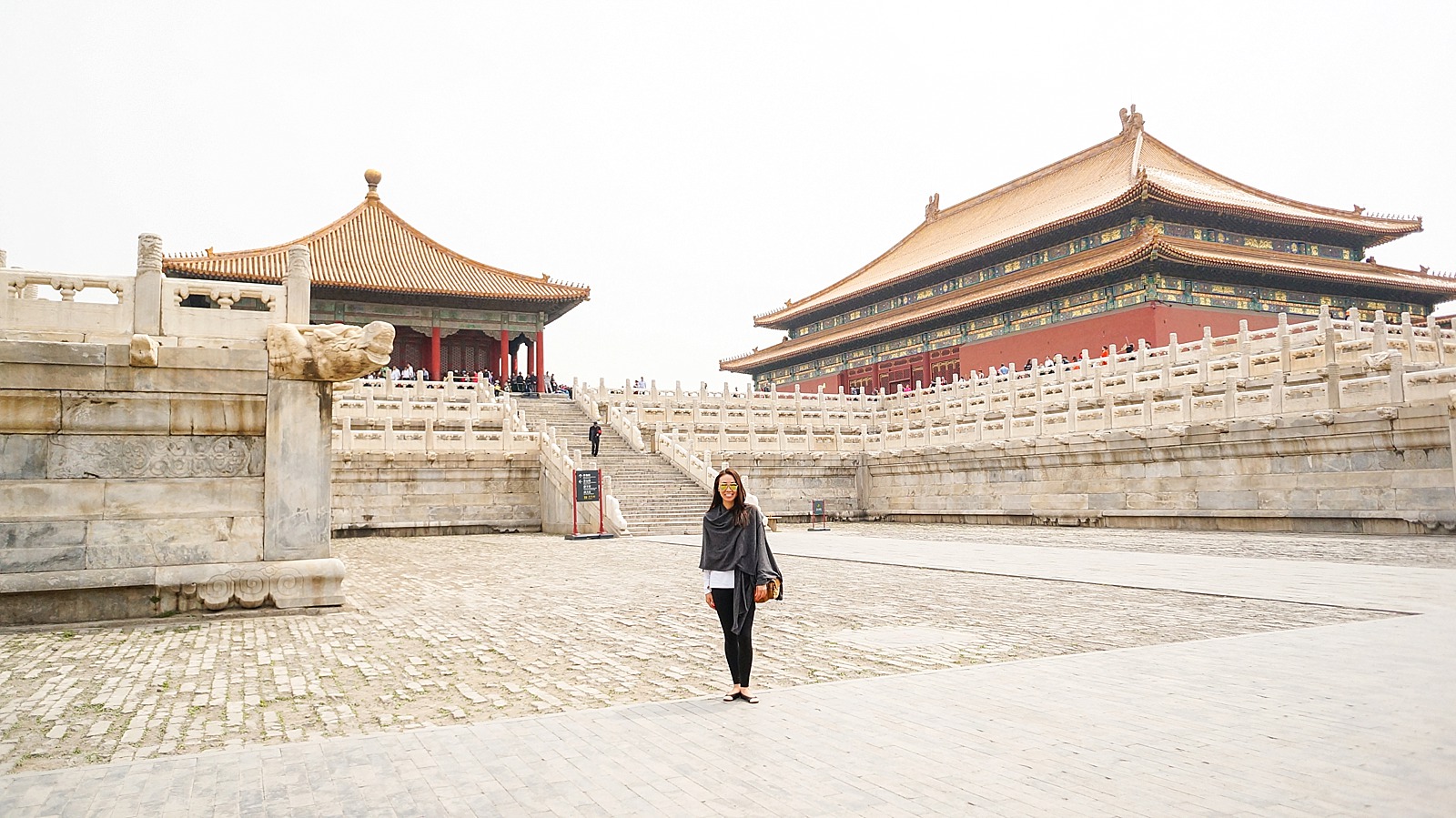 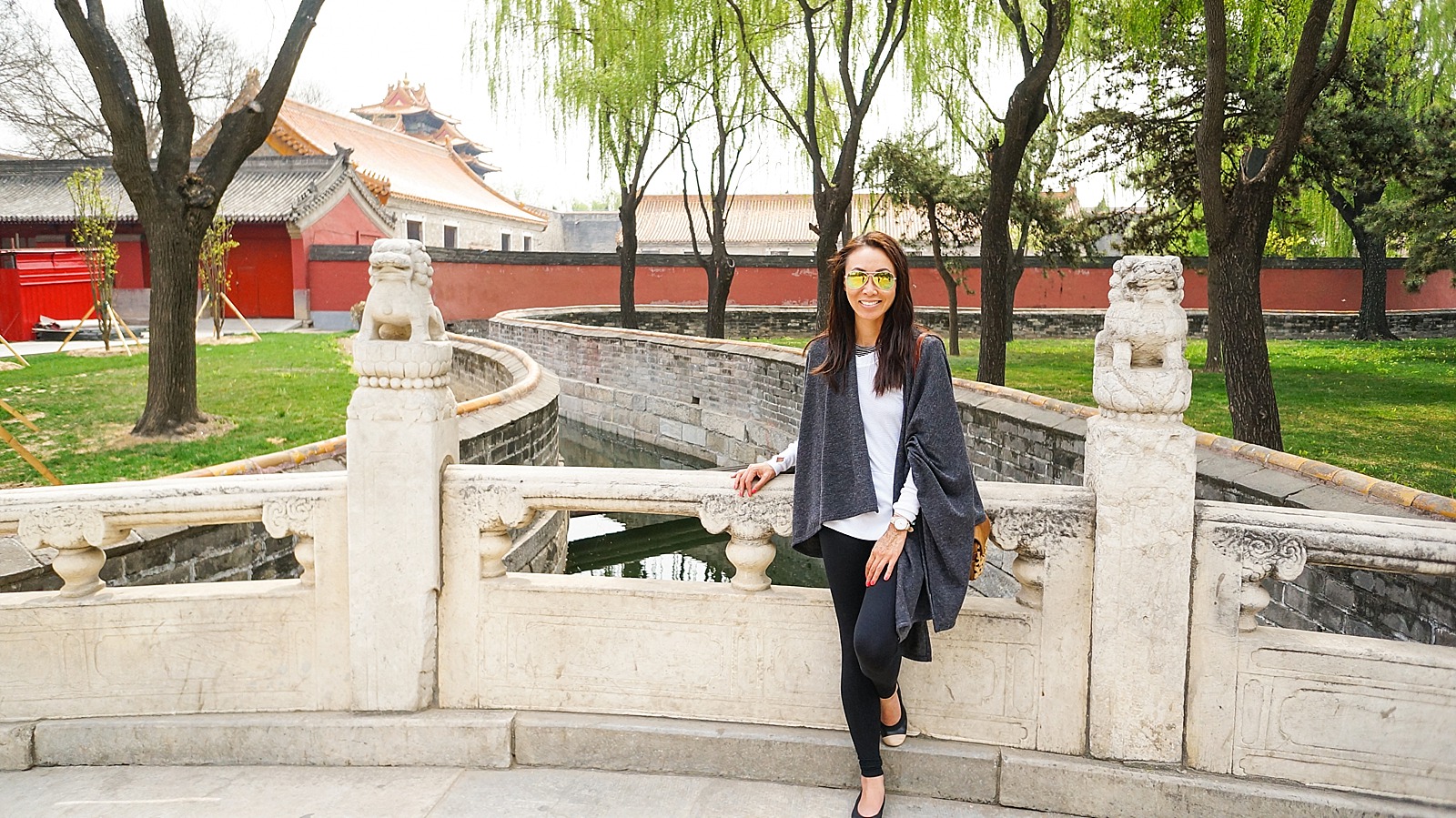 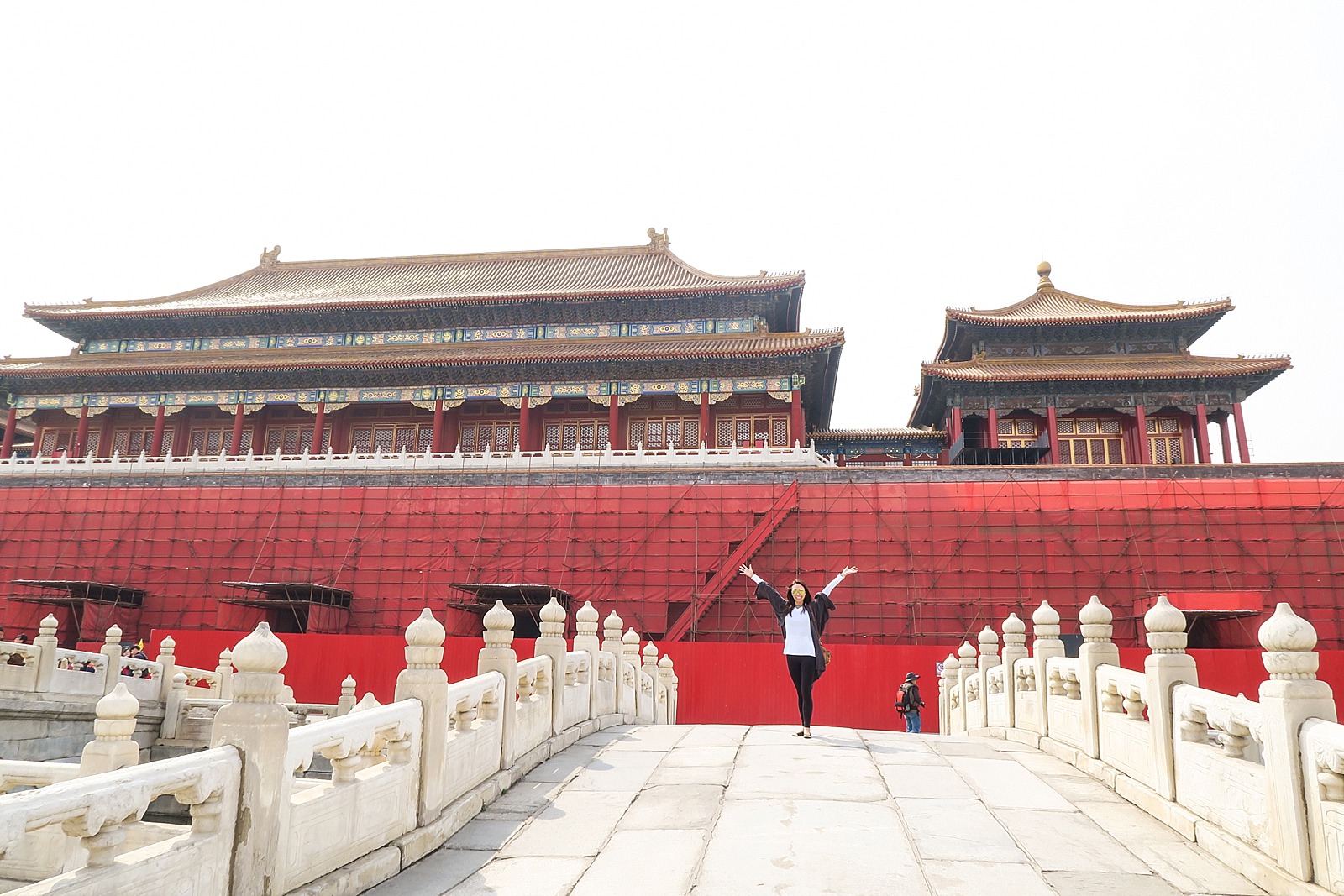 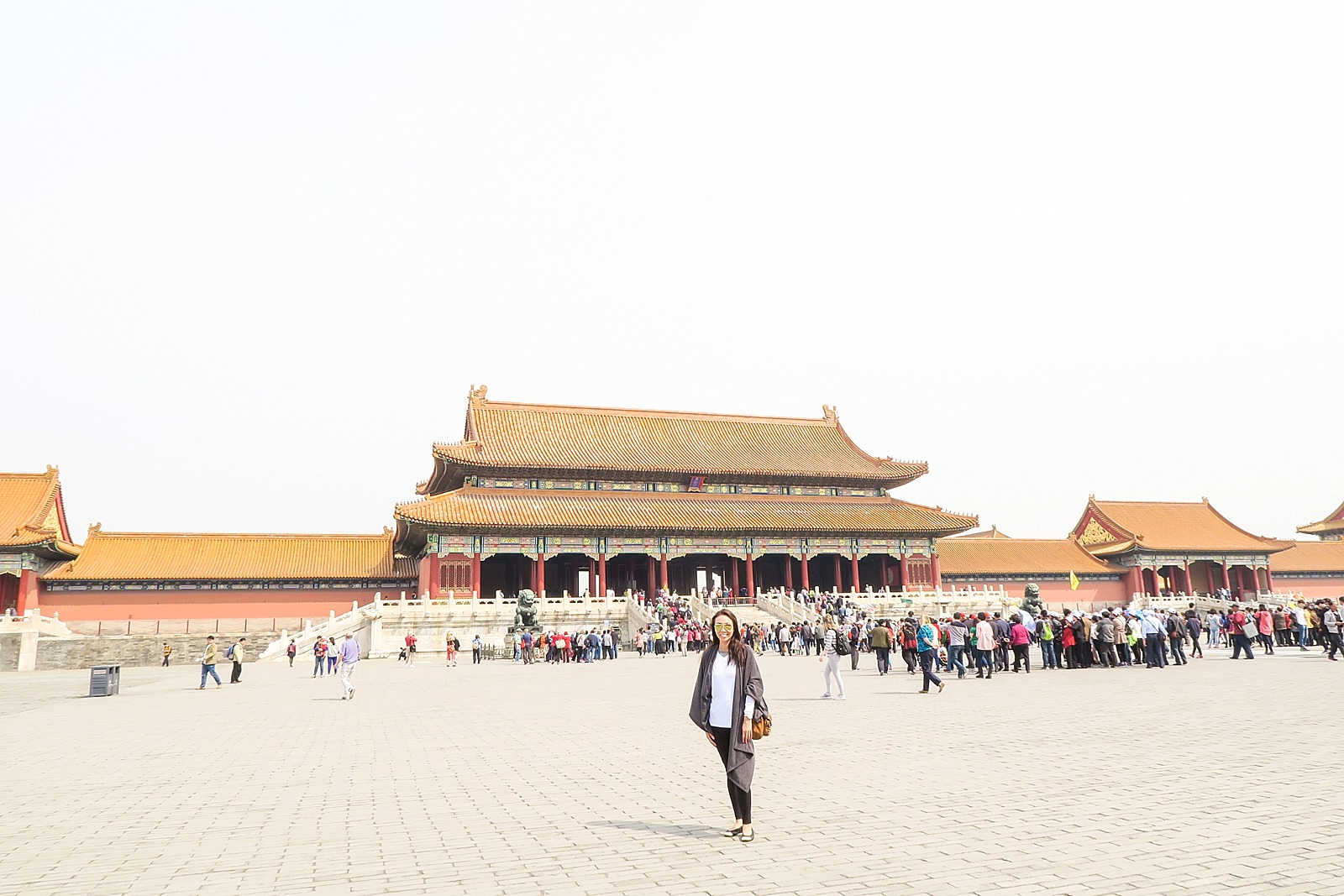 A taxi from the airport to the Forbidden City should cost you around 120 yuan. If there’s one offered for 180 by a private taxi with an English speaking driver, just go for it, if it’s at one of those trust worthy booths with people and you pay ahead of time. It’s worth the layover trip – or book it through the layover tours site – our friends made it to the Great Wall and back, but I’d suggest you have more layover time if you can help it (10+ hours).

Thanks for coming along with me on my 8-hour layover excursion!

There are no comments on The Forbidden City + Tiananmen Square – Beijing.