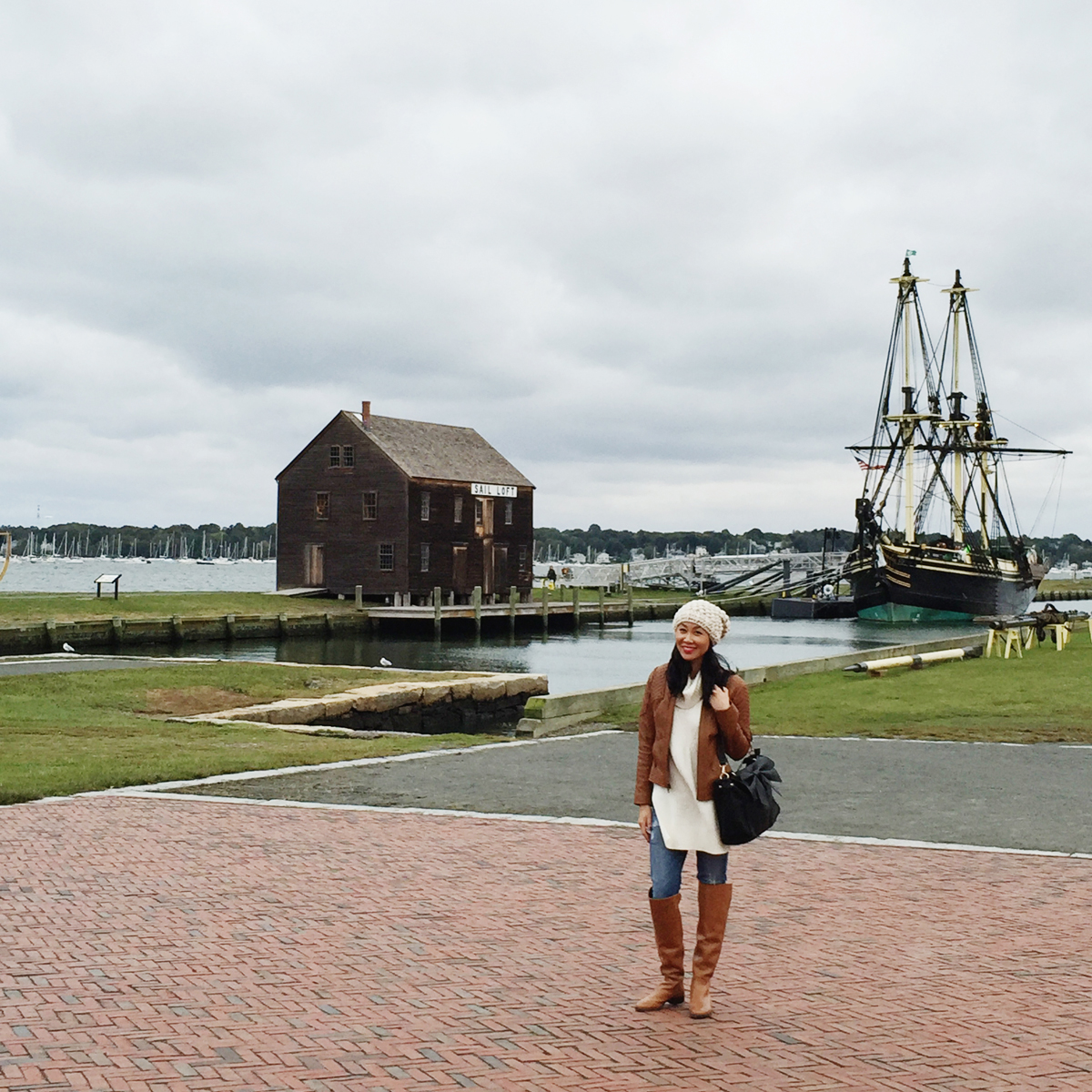 Picking back up from last week’s Boston post about my recent/first time visit for the Wayfair Heart Home Conference, my travel babe Sommer wanted to take me to Salem.

I realized I am terribly uneducated about the history about the Salem Witch Trials. I assumed the area had some bad juju, assumed everyone who died was actually a witch, and realized I knew nothing about anything when it came to Salem. Hey, I never claimed to be a history buff, I’m a creative. So this was some education eye opening visit!

After Sommer and I walked the Freedom Trail in Boston, we caught a train to Salem.

By train (commuter /outbound train, not the T), it’s less than a 30 minute ride – check the schedule closely for outbound and inbound from Salem to Boston. By car, it’s roughly 45 minutes. How do I know the distance by car? Oh, because we misread the train schedule and had to Uber it back to Boston at 11:30 PM. Thank God for Uber and the driver who was willing to drive us back to our hotel. 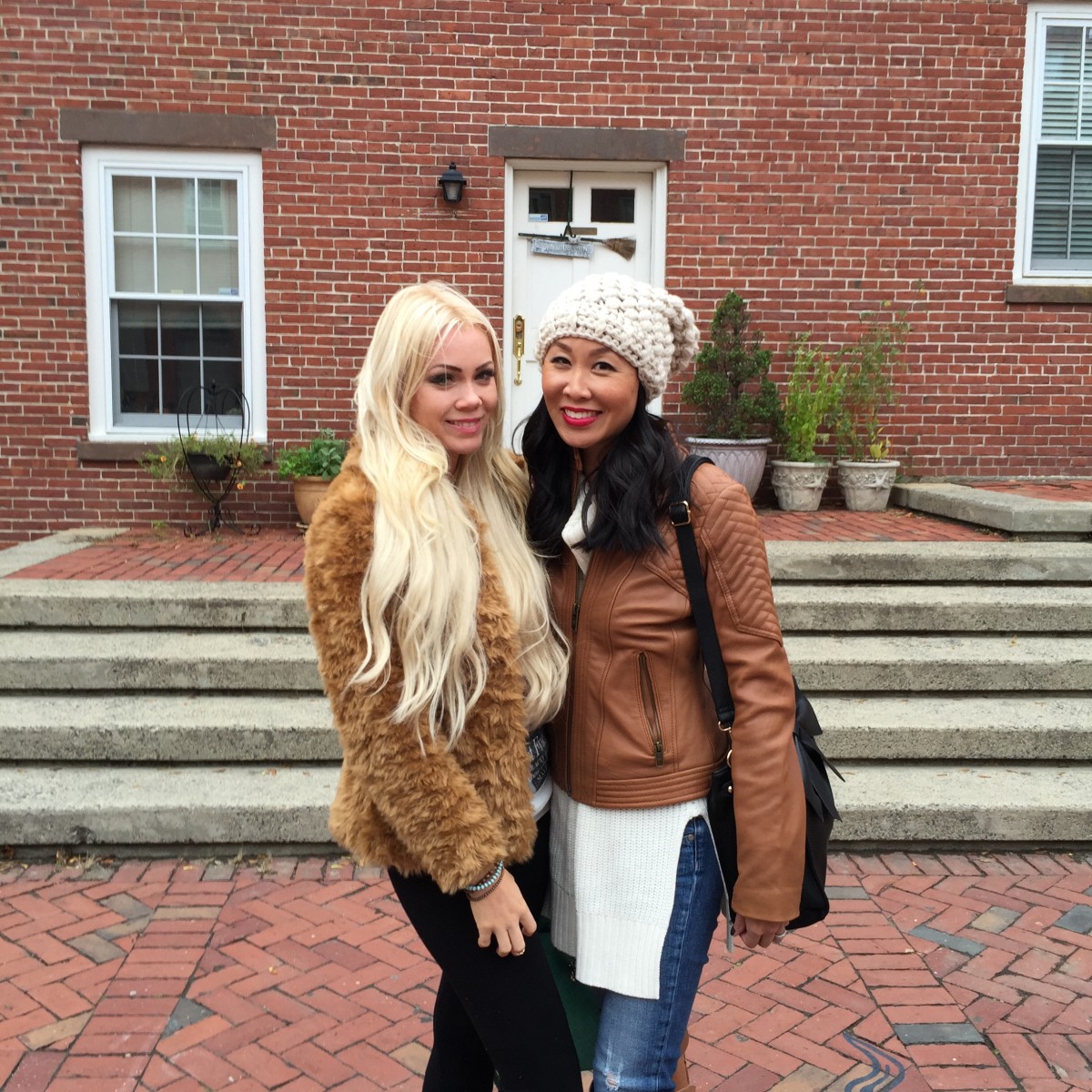 Here we are in Salem around 5 pm, in the courtyard of the city hall area from the movie Hocus Pocus. The city hall was to my left.

October is the time to visit Salem

Halloween, witches, festivities, you get it – we heard Dakota Fanning was in town for who knows what, just for fun? If you’re going to visit Salem at all, the time to go is the month of October so you can go on a candlelit tours, see Haunted Houses (if getting chased by a dude in a costume and chainsaw is your thing), and enjoy the market festivities.

The entire town is celebrating during October and utilizing the tourism – like giant cockroaches on the house wall, eeek! 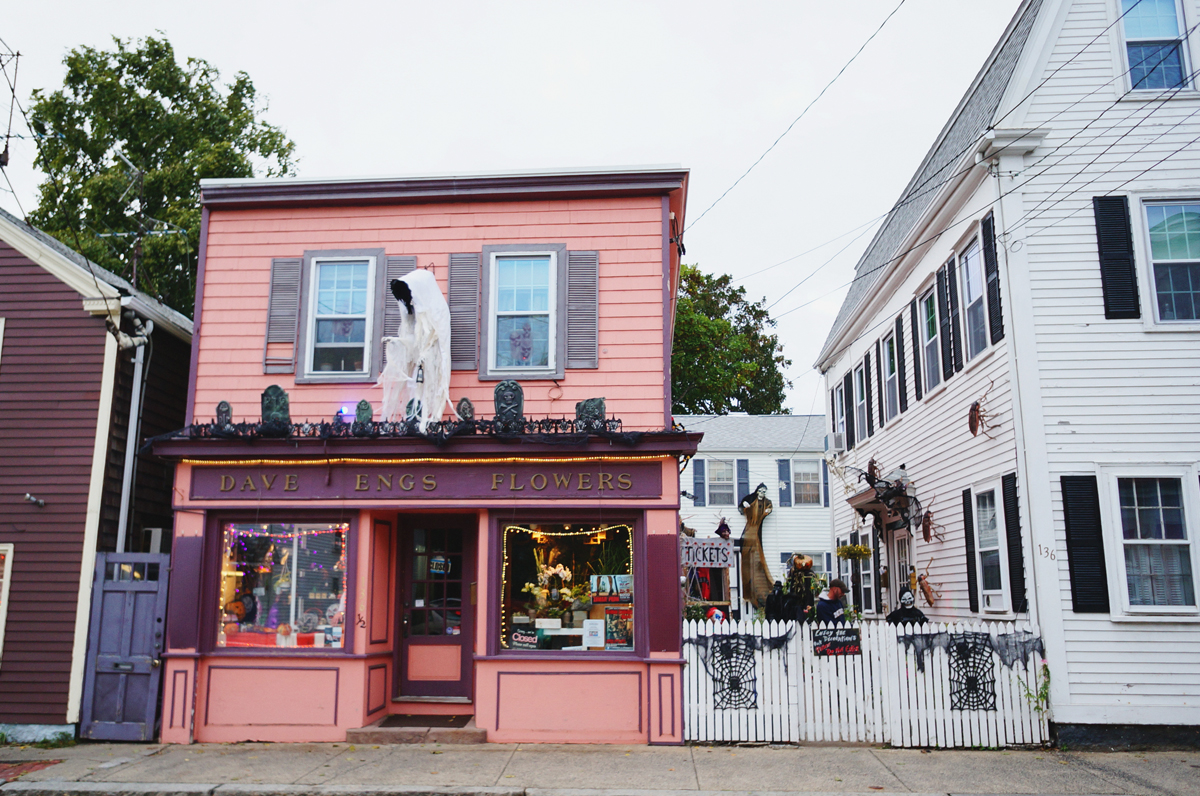 So back to the witches thing – I was super hesitant about going but Sommer swore it was beautiful and one of her favorite places. A place where there were witch trials? What?!

So aside from the actual factual history – let’s talk about Salem. It really is cute. There’s water. 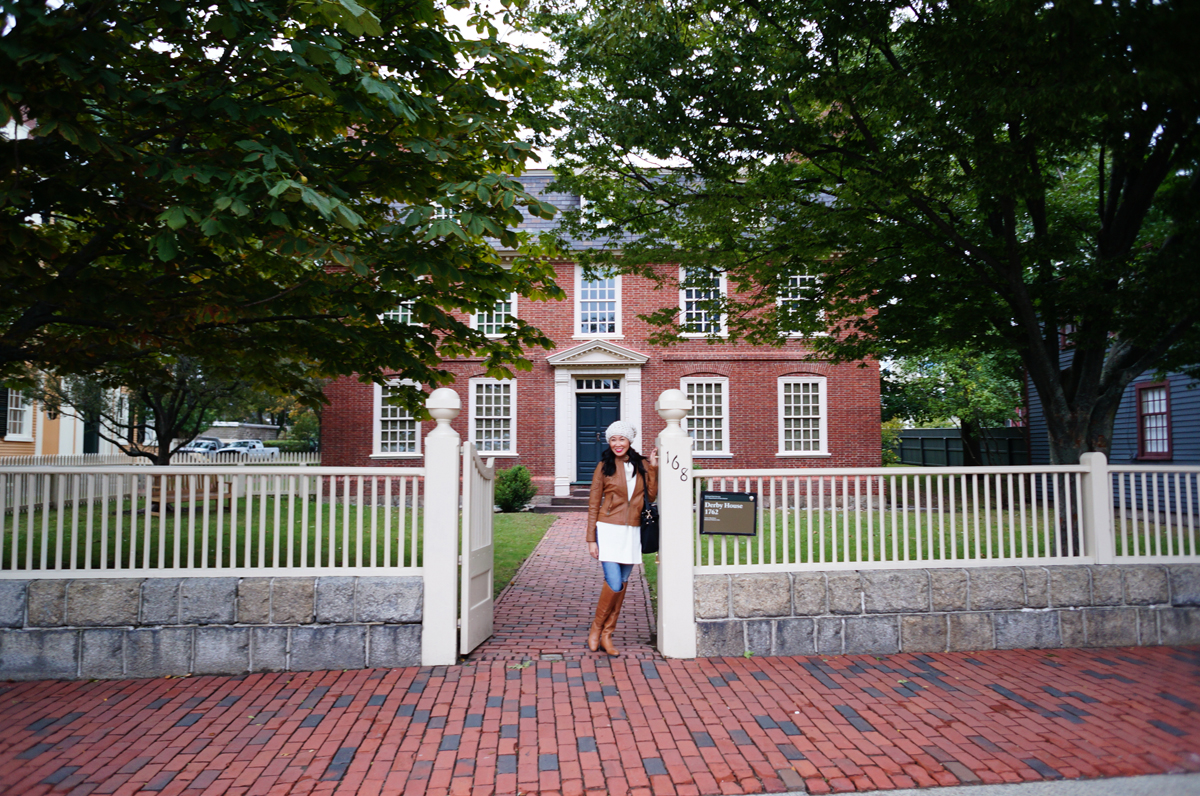 The House of the Seven Gables

The House of the Seven Gables is the black house you see in the back – it was a 1668 colonial mansion. It was the house that inspired Nathaniel to write a book about it – and now I need to buy the book. 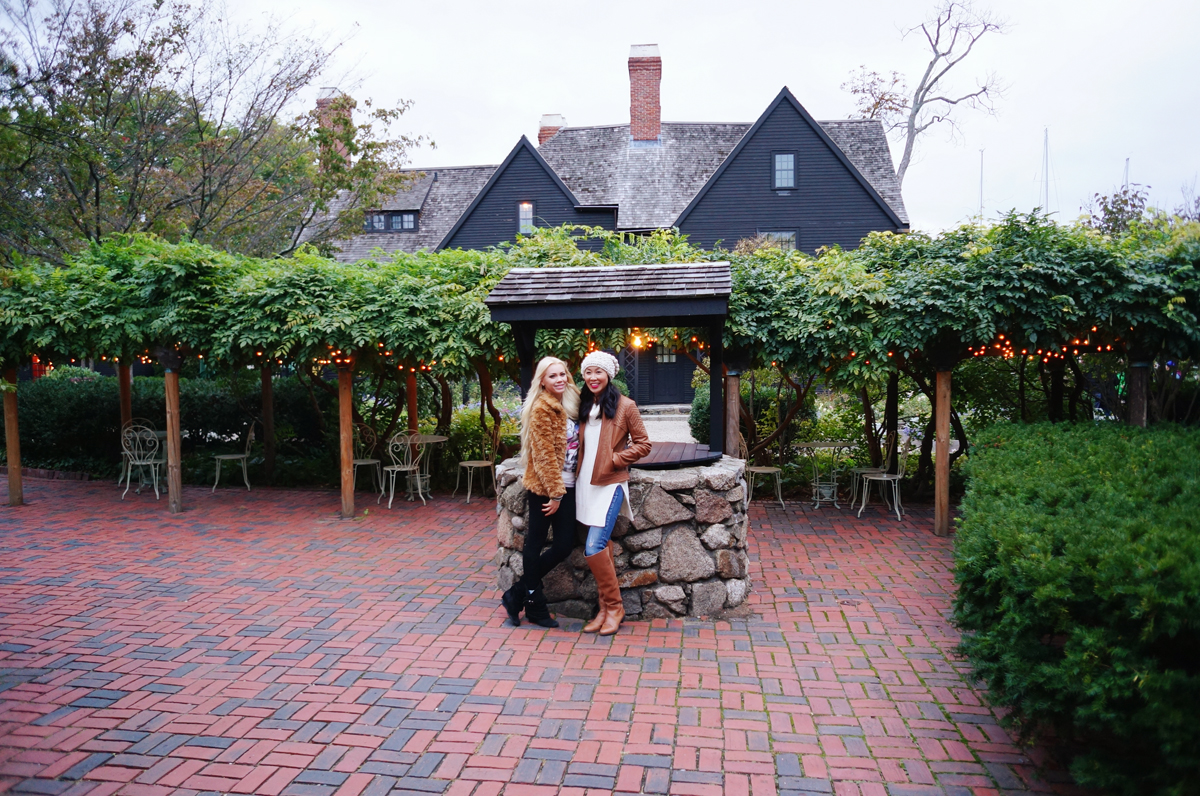 There was this dreamy garden too… 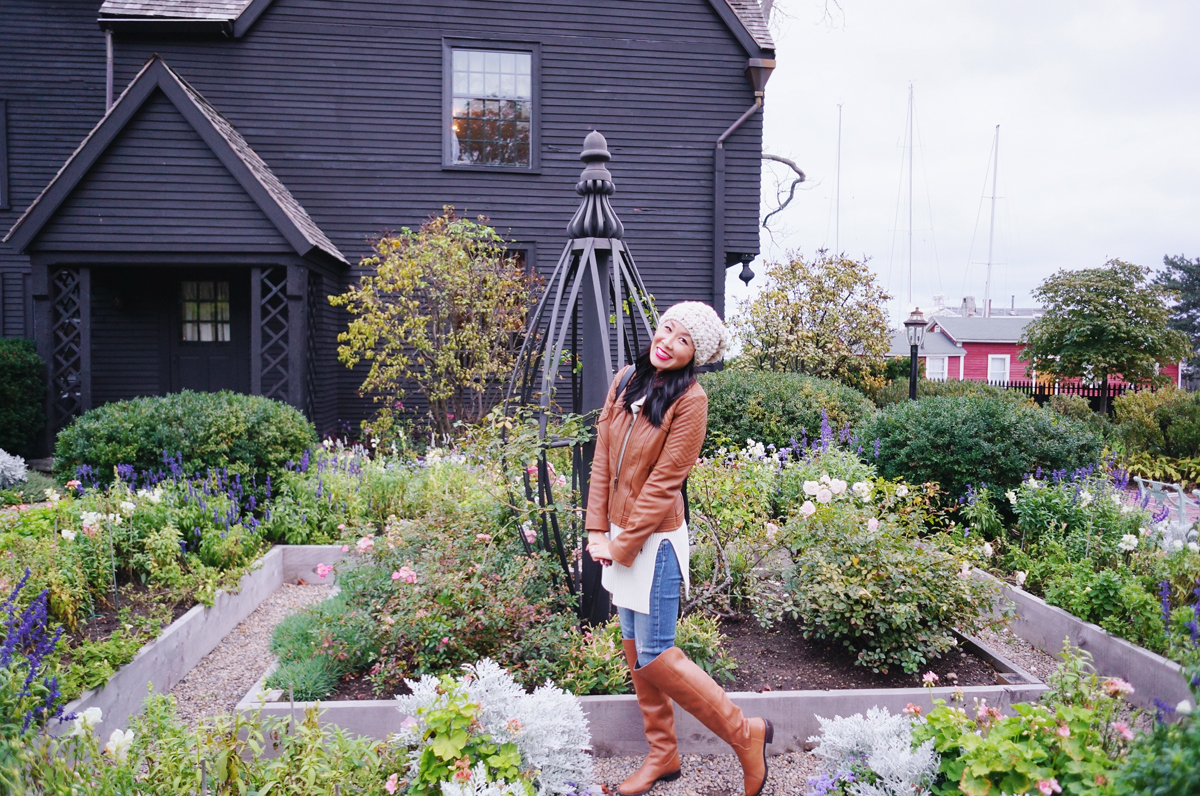 Then as it got dark, we decided it was time to catch our candle lit tour through Salem.

During this tour we walked around the historic buildings, heard about the history, ghost stories, the bad sheriff who accused people of being witches and saw the cemetery. It wasn’t scary at all, it was really interesting to find out historic facts – we even passed the building where Alexander Graham Bell made the first telephone call! It’s now a popular seafood restaurant. 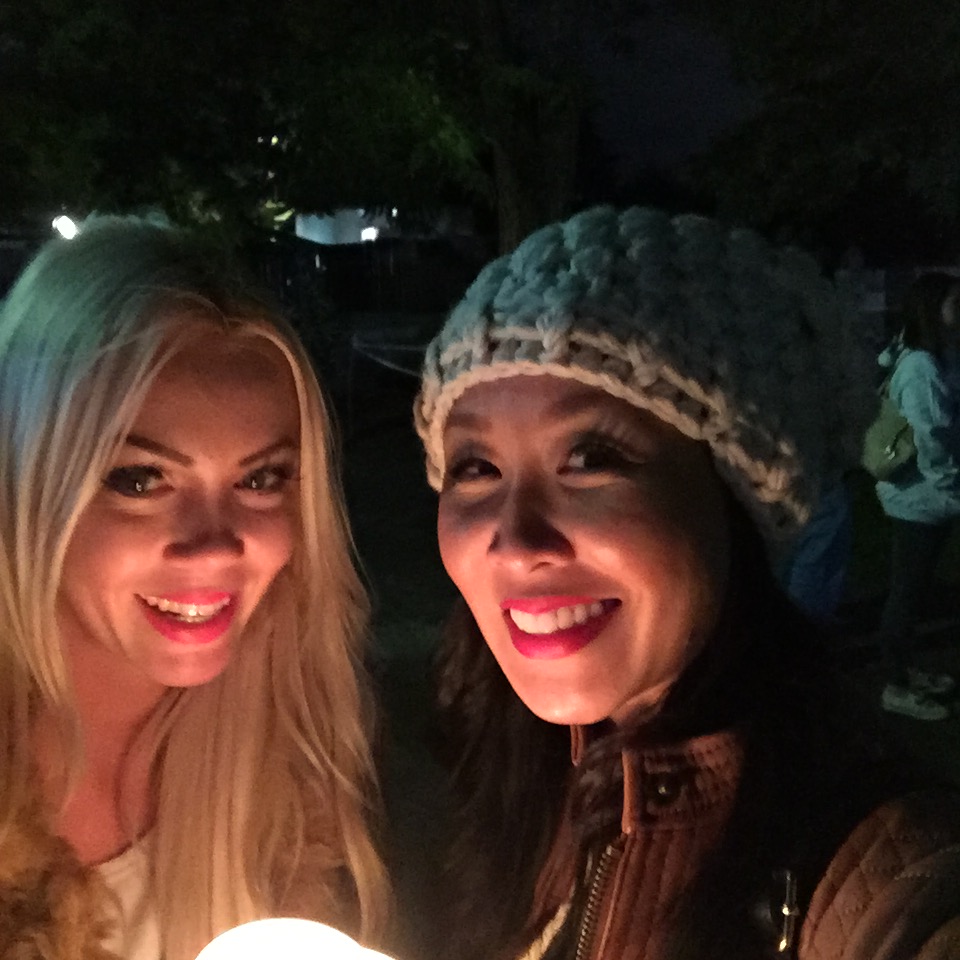 I caught my plastic cup on fire that was protecting my flame due to not paying attention and Instagramming.  So I blew out my candle/cup that was on fire and I decided to not have candle light – it was windy that day. Flame cup fail.

Here’s a new memorial of stones for the 12 who were killed during the Salem Witch Trials. There is a stone wall on the side of the cemetery with a few large stones jetting out with their names engraved. Those executed never had a proper burial or marked grave, so this is a memorial. Pennies are on there because of the tradition of leaving pennies on graves through history – for many reasons, you’ll have to Google why people leave pennies for the dead. 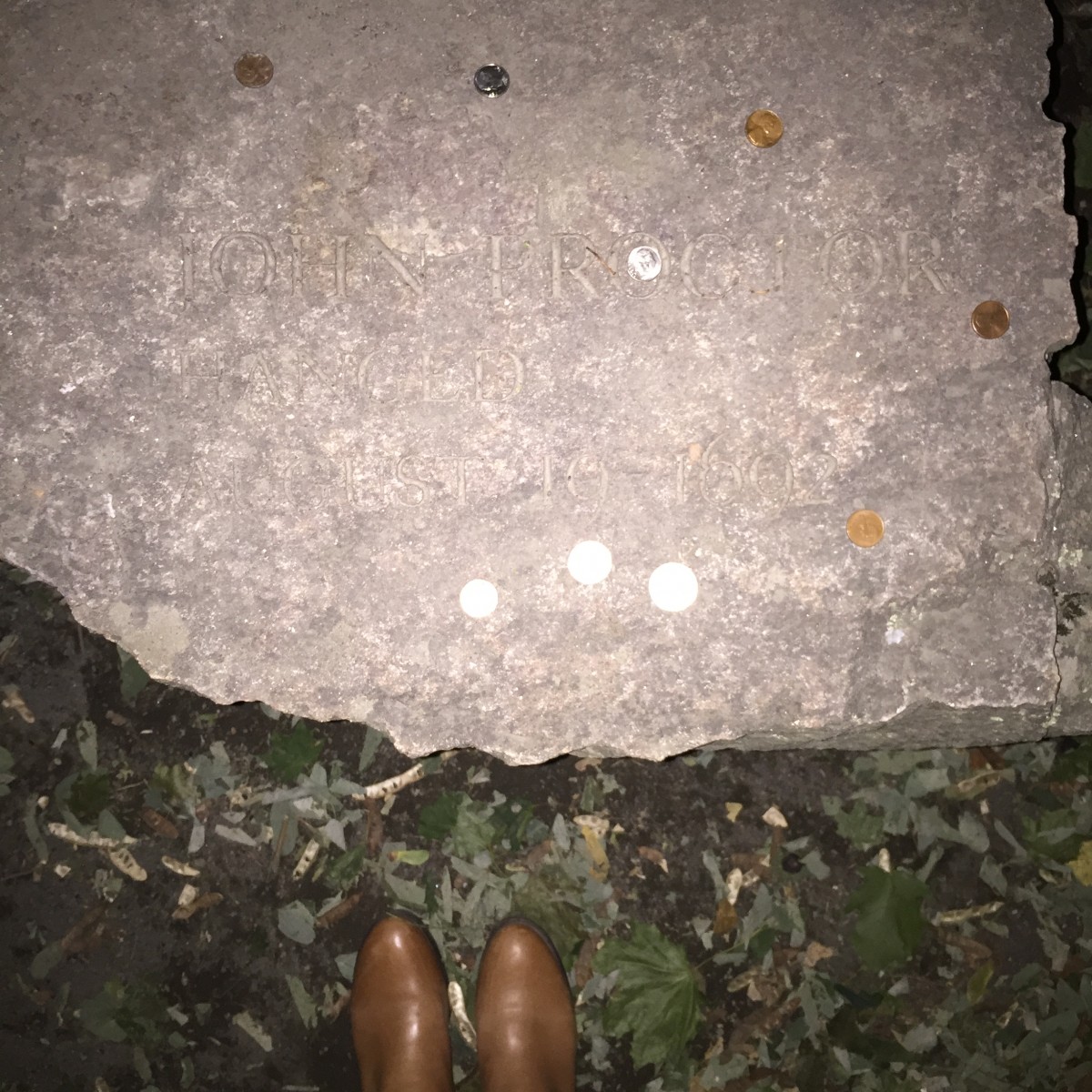 Sommer was a good sport about going to the Salem Witch Museum even though she had already been. I really wanted to go – and then I didn’t realize it was like a Chuck E. Cheese with the characters only not as interactive – the figurines light up in corners of the room, but they don’t move. 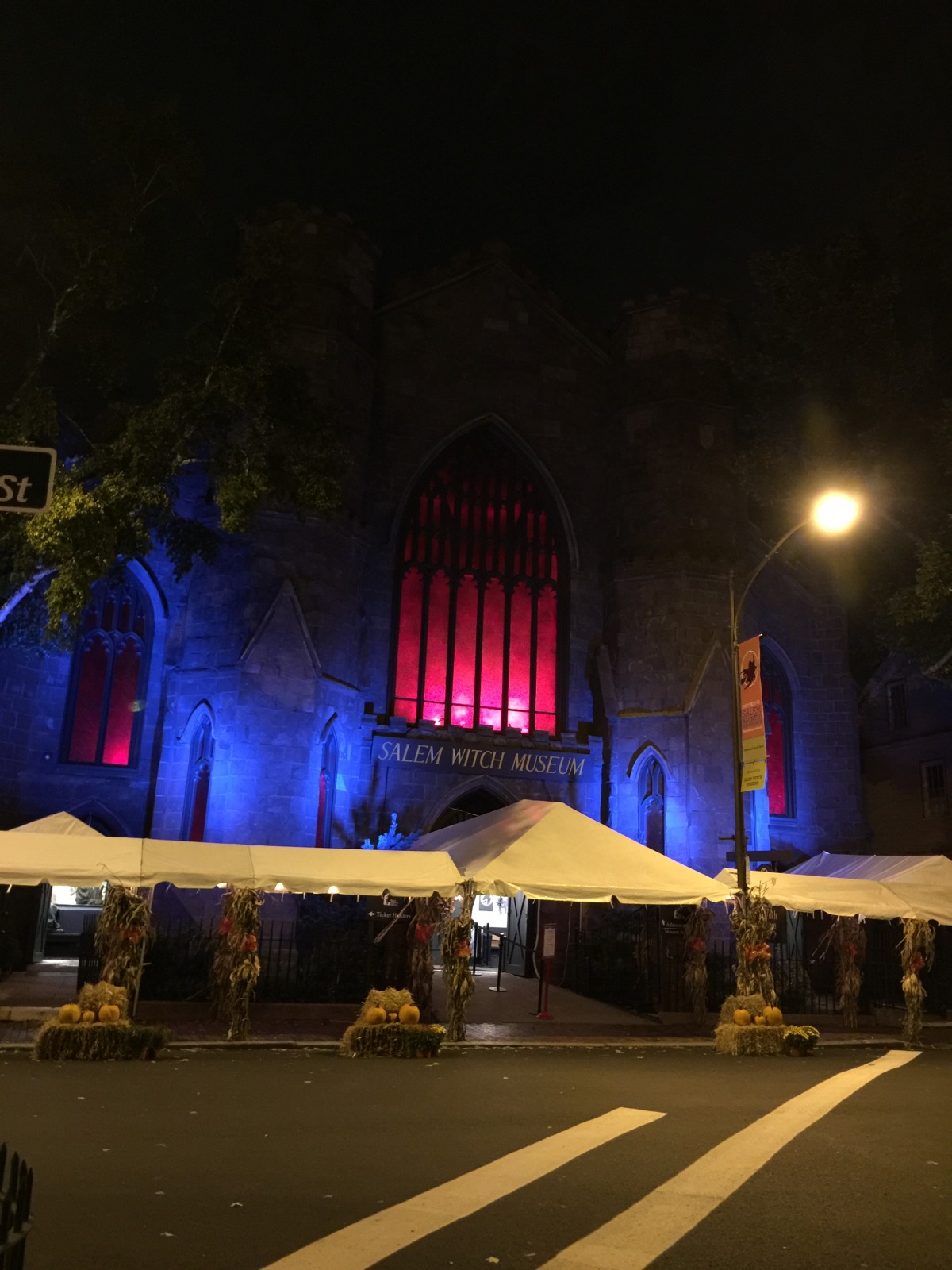 I’m not ripping on it at all – because for $10, it was worth the educational value to find out how the Salem Witch Trials started and how some little scrappy crazy girl started it all for fun and ended up killing innocent people and ruining many lives.

I’m not saying I’m saying witchery is OK, because it’s not, but if they really were innocent, that’s just plain terrible, right?

But, the museum isn’t what you think – there are no artifacts and it’s more of a visual with voices. I do learn better that way, so it worked, but just be aware of that. 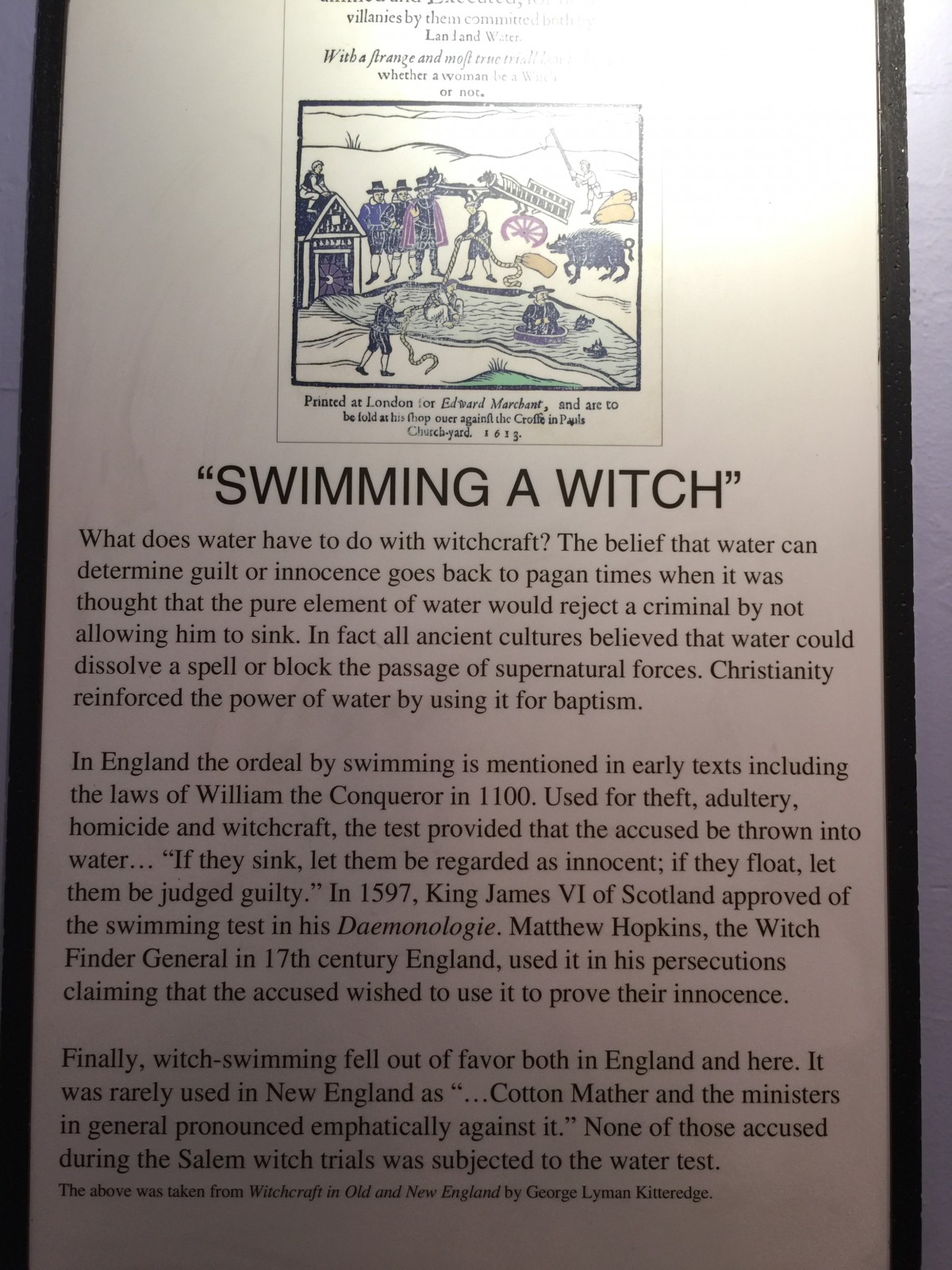 I think you’re pretty much screwed either way if I’m reading that correctly.

Then there are names of people accused of witchcraft and who died. One guy got crushed under weight because he wouldn’t give a confession if he was or wasn’t (either apparently meant all your goods were given away and not to your family). Giles Cory knew this and was pressed to death, but his family got to keep his wealth, what a brave man.

Oh, and anyone could accuse anyone of being a witch and whether you were or not, that was too bad – your valuable were taken away and your innocence was for others to decide. 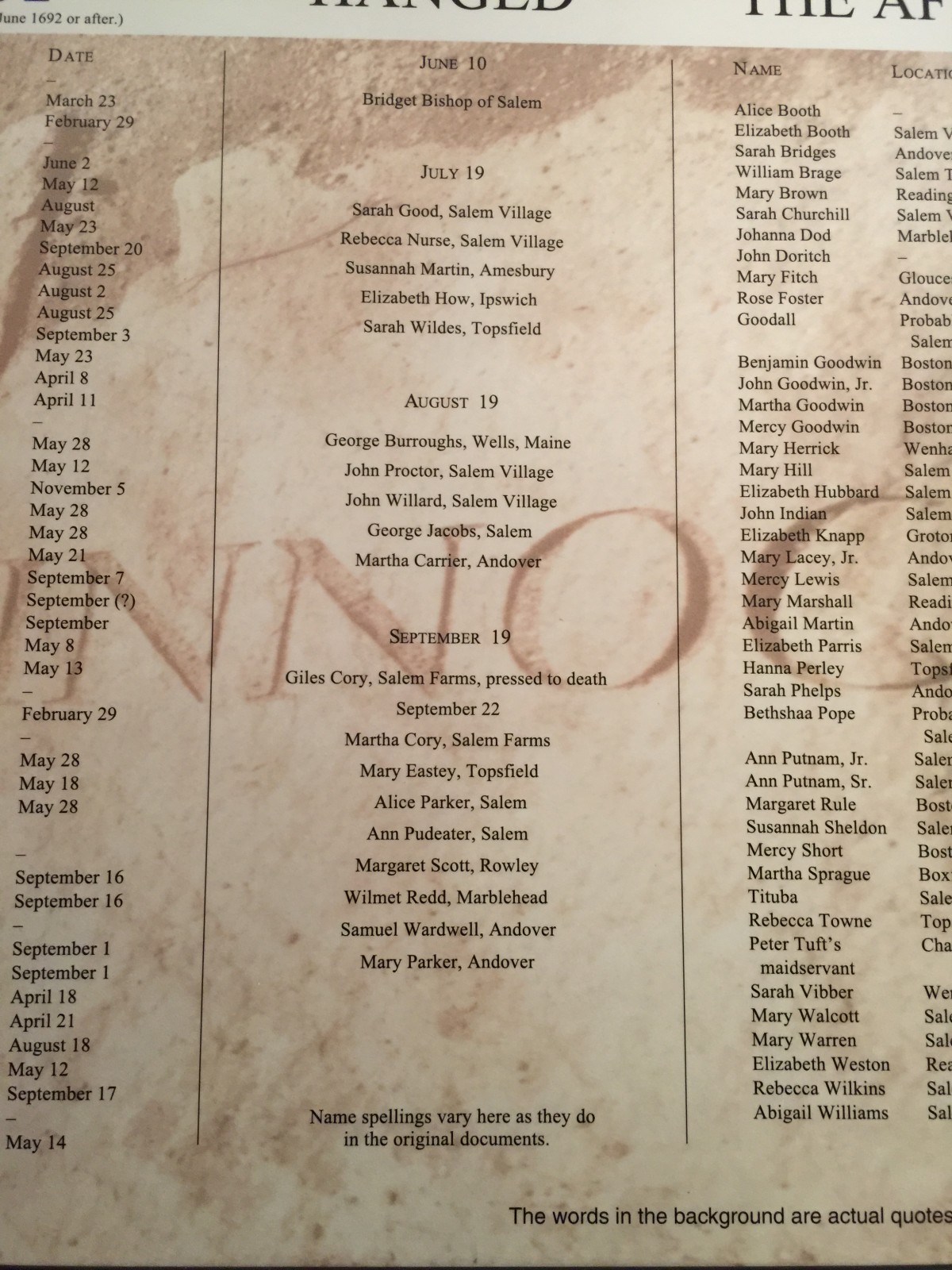 In 2001, more than 300 years later all the names of those not previously listed were added to the resolution (from 1992) honoring those who had died – so all were finally proclaimed innocent! Read more about the Salem Witch Trials.

I definitely learned something new and got my refresher on history – this time I paid attention so I have my history facts straight! Maybe they should have taught that lesson like they did in this 45 minute statue museum.

The best part of exploring a spot is to ask the locals where they recommend you go next – whether it’s a museum, site, or restaurant! After checking out the Salem Witch Museum, we were starving and it was 9 PM – we were recommended to head to Sea Level, down by the water.

Due to JMar’s recommendation to eat a lobster roll, I ordered one after I had the most amazing calamari of my life. 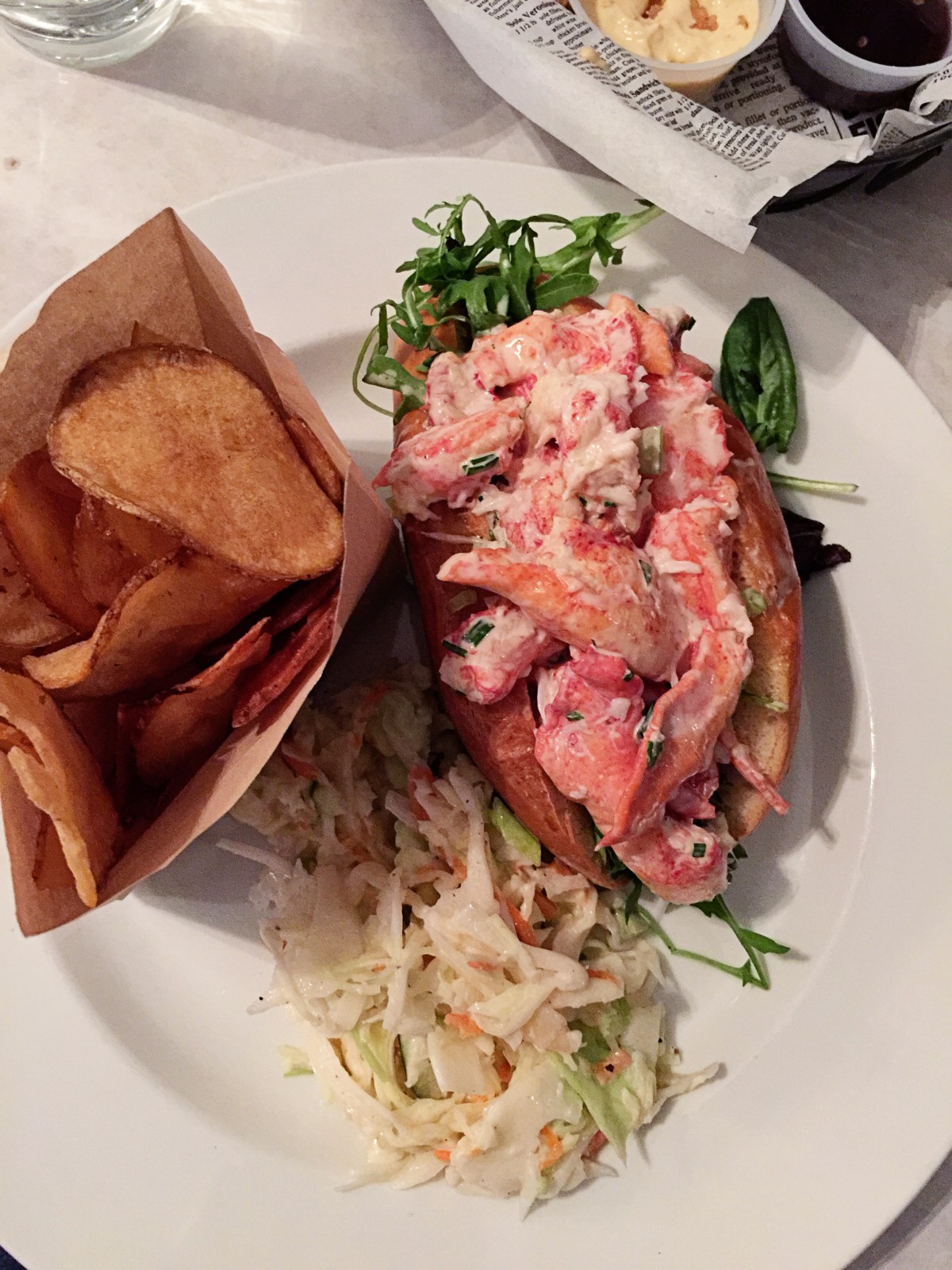 I wish I ate more of that so I wouldn’t be craving it now looking at it.

Around 11 PM we headed back to the train station to find we missed the last train which was 9:20 PM, and so we had Uber pick us up and take us back to our Boston hotel – it only cost $45 so not terribly bad, and we had some good jams in the car.

Use Uber discount code dianas1645ue for a free ride on Uber up to $20. Thanks Uber for taking us back!

I’d love to revisit Salem one day and spend more time there, perhaps a few days. I also want to read more about the witch trials and watch the movie The Crucible (1996).

So that was our Salem trip! What did you think? Have you been?

There are no comments on Salem – Witch Trials.