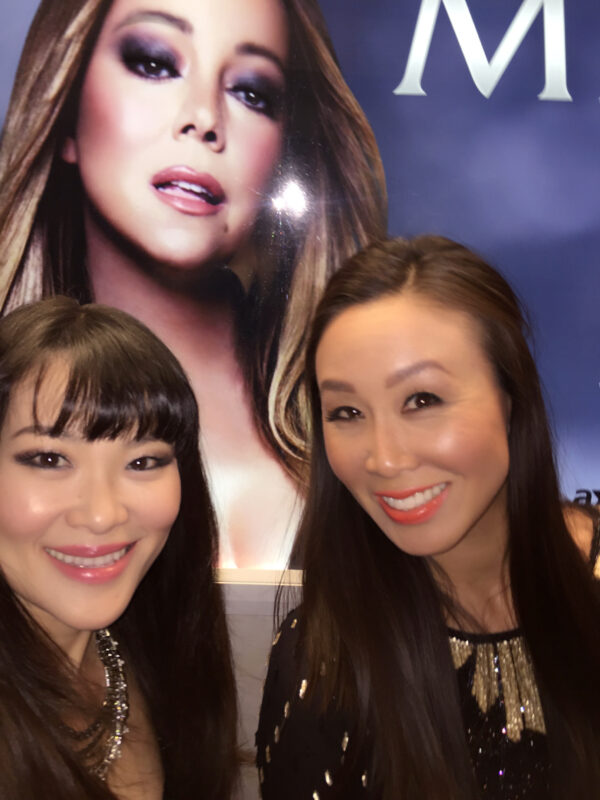 I wanted to share some tips and a Mariah Carey Las Vegas concert review if you’re thinking about catching her show.

One of my longtime and best girlfriends Jennifer and I saw Mariah back in 2006 in Phoenix and I saw her previously in Seattle around 2004 around Christmas time which was a real treat. We hoped in the car to see her again – a trip booked within 1 hour after texting asking if she’d be interested in going – Asian efficiency my friends, paired with crazy Mariah Carey fans. Jennifer is always up for anything I suggest doing – at least it seems that way because we like to do all the same things which is a great girlfriend to have through life!

Where to sit at the Mariah Carey Concert

We sat dead center, level 2, paid $175 for our seats dead center! The upper level areas is where everyone sits during the concert.

If you want to stand and shake your booty all concert, 18 songs I believe, the lower level it is! It’s small so I would say no matter where you sit you’ll have a pretty good view.

If you buy a package where you can get an aisle seat and in the first seven rows or so, you might be able to see Mariah walk by you like so – and she might put the mic in your face so you can sing a lyric! The Beautiful Package with a few perks and somewhere in the first 7 rows will cost you $750, I already checked. If you want to meet her after the concert and take a photo, you can pay $1,500 – $3,500 for a ticket depending on the additional perks you’d like. 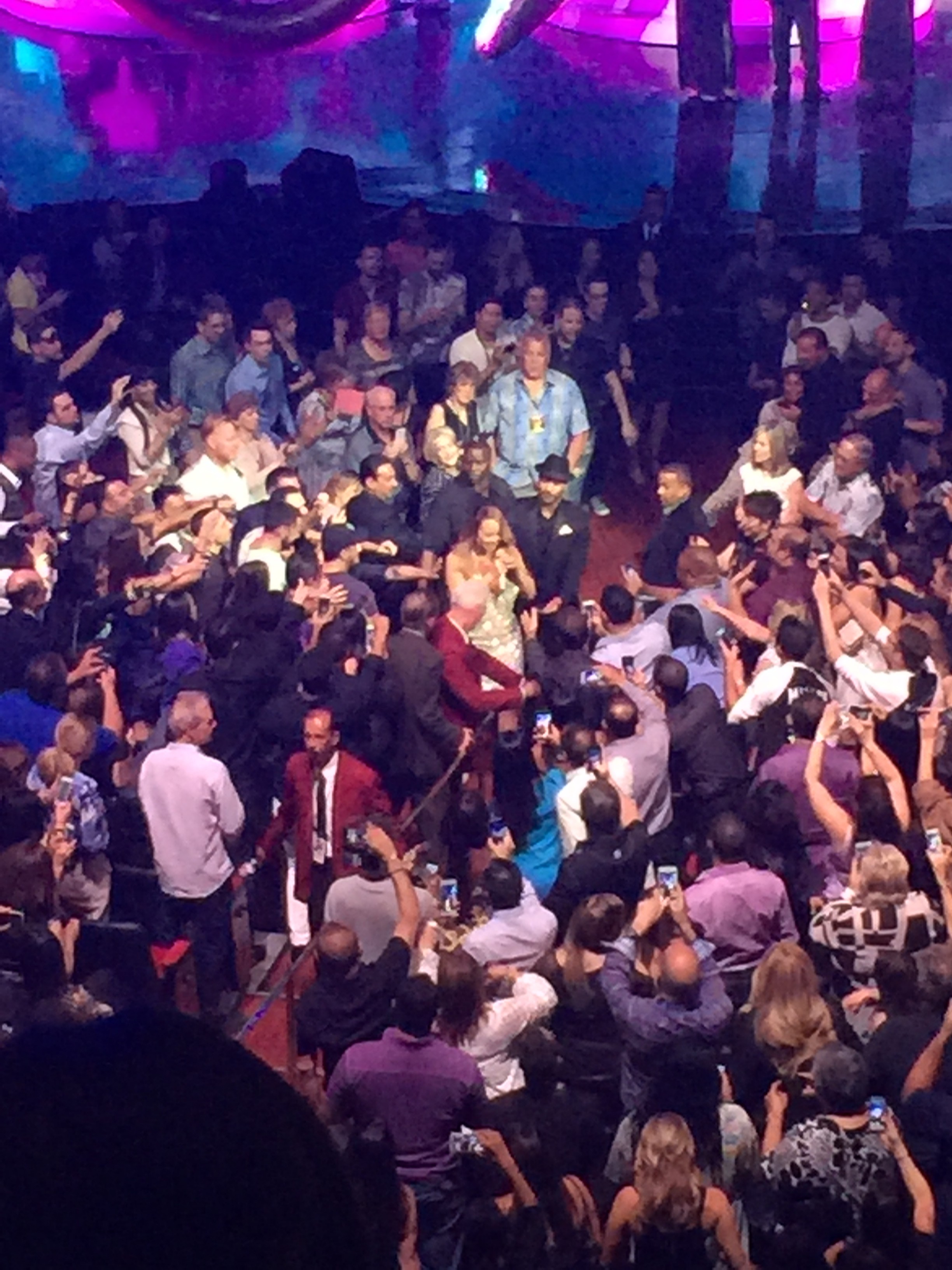 I was pretty much dying witnessing this and thinking how I’d love to be that close to her! Mariah interacts with her fans quite a bit during the concert, talking to fans, walking through the small colosseum, and even picking an audience member for one of her songs which was so hilarious!

The scene for “Touch my body” – 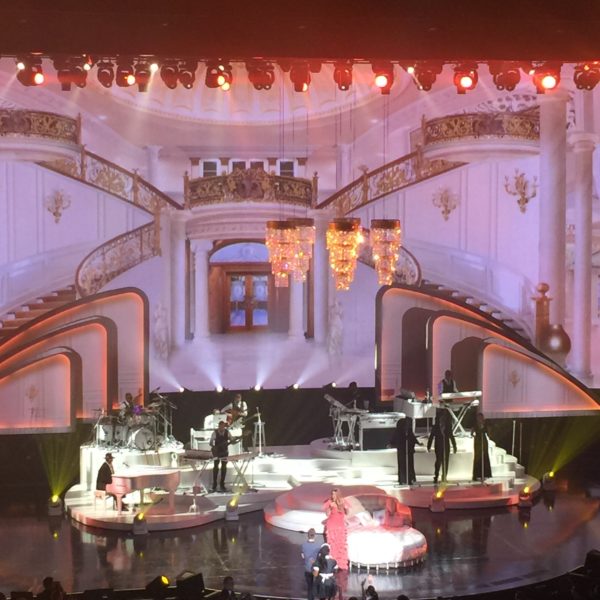 She opened up the concert with her first No. 1 hit “Vision of Love.” The track recently celebrated 25 years last week! Feeling old now? Yeah, me too.

When the concert began (she started on time), I got goosebumps when the curtains pulled back and I saw Mariah’s silhouette – I don’t know if anyone feels as crazy as I do about her, but she’s a legend, so that moment was a true internal freak out bubbling through my veins erupting to screaming, clapping and cheering mega fan. 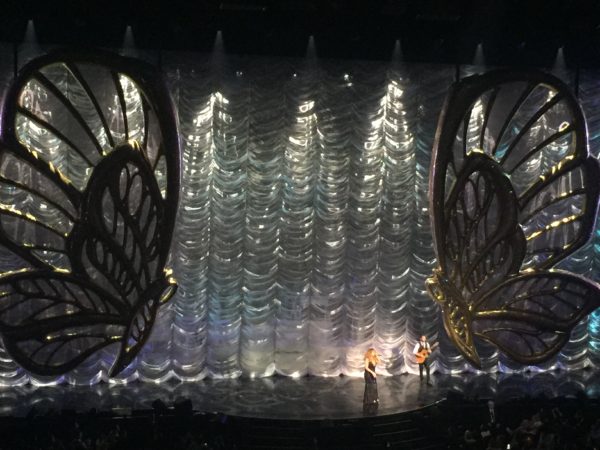 You could say Jennifer and I got really EMOTIONAL during the concert.

Mariah despite the critics questioning if her voice was strong enough and the YouTube video of her messing up (she was JUST going through a divorce, give her a break!) she hit every single ear piercing high note she’s known for and for one song came out doing it. So yes, Mariah can still sing it, and it’s phenomenal in witness in person. 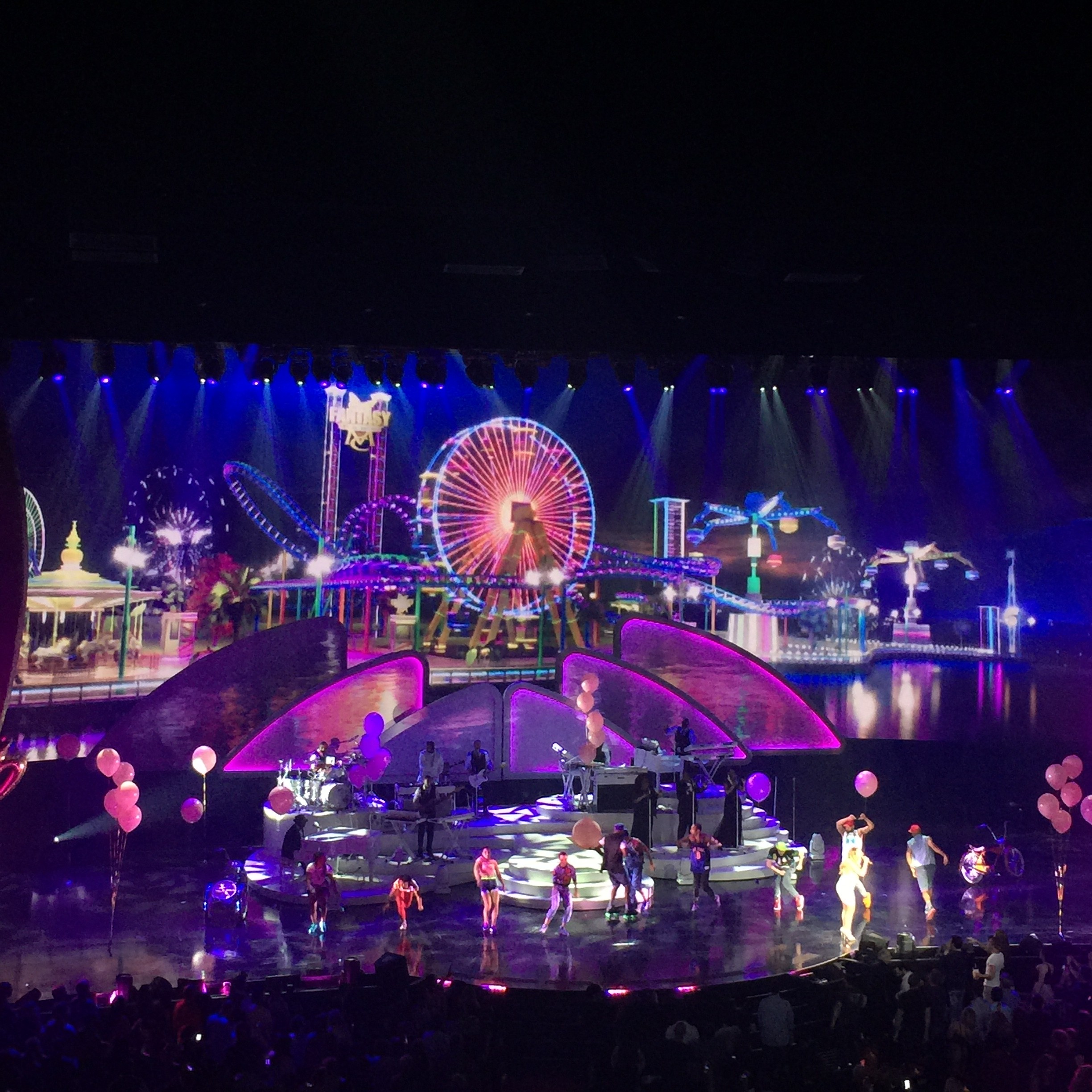 You know a handful of your Mariah Carey songs pop into your head – I mean the woman had 18 No. 1 hits! She sang 18 songs! 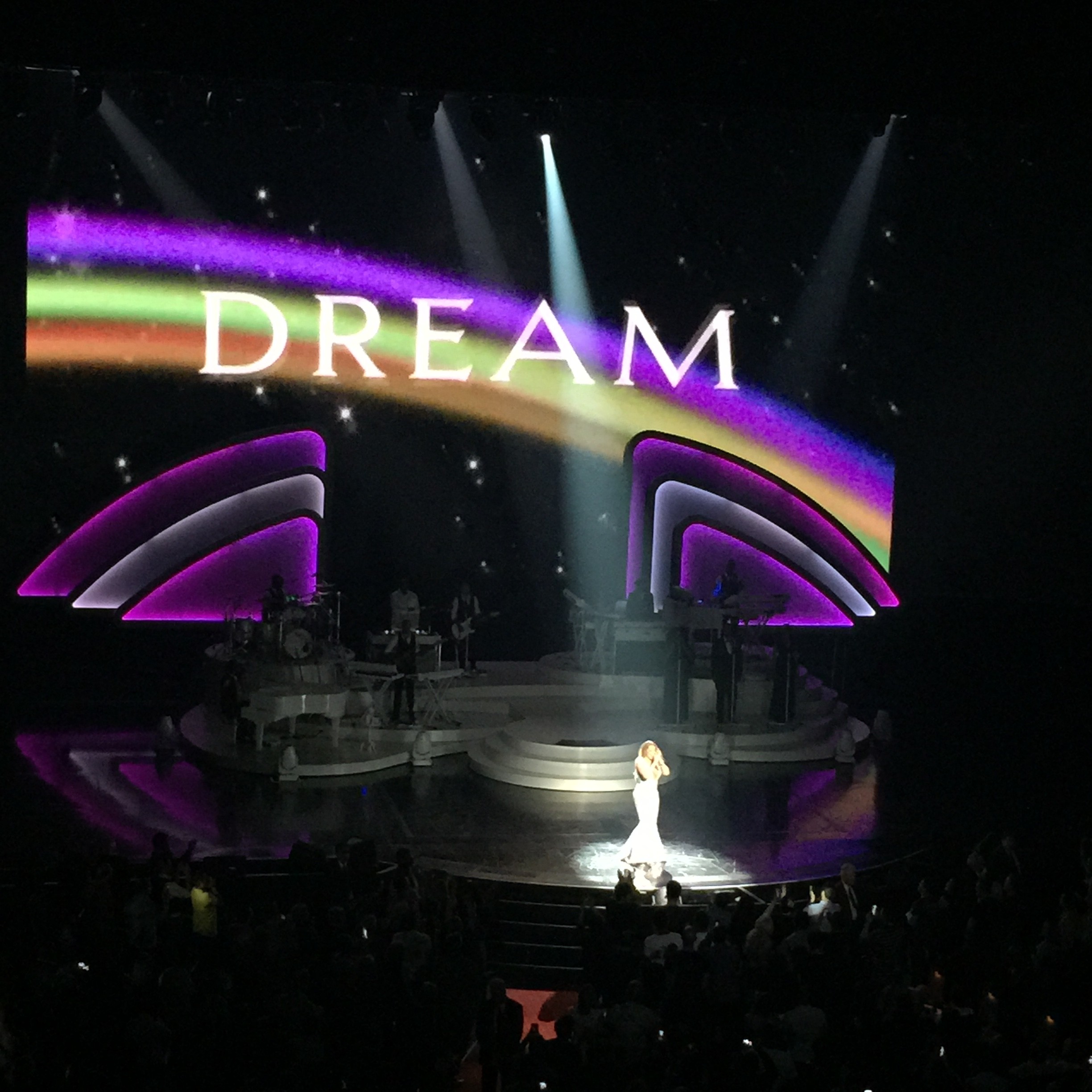 She ended the show with her new single, “Infinity,” listen here. My favorite line – “Everything you own boy, you still owe.” 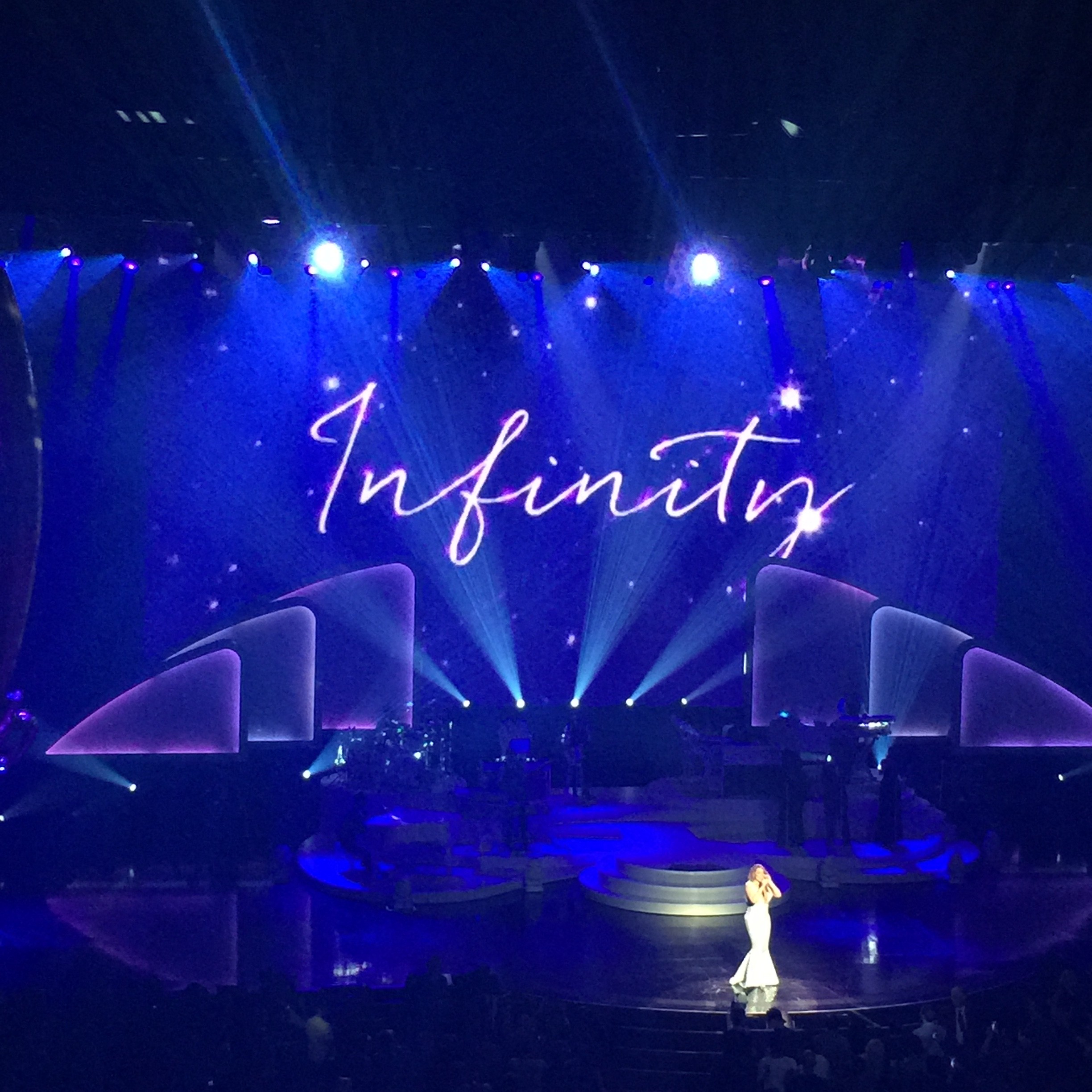 The closing – confetti falls from the sky. 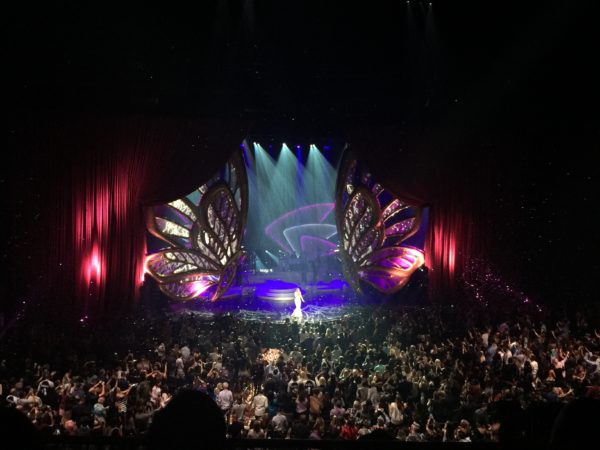 I have a hard time when shows come to an end. Correction – I have a really hard time when John Mayer plays his last set and Mariah Carey sings her last song.

Hope you enjoyed the quick review and tips on where to sit for Mariah’s concert. Are you a fan? Will you see her? What’s your favorite song?

There are 4 comments on Mariah Carey Las Vegas #1 to Infinity Concert Review + Tips.