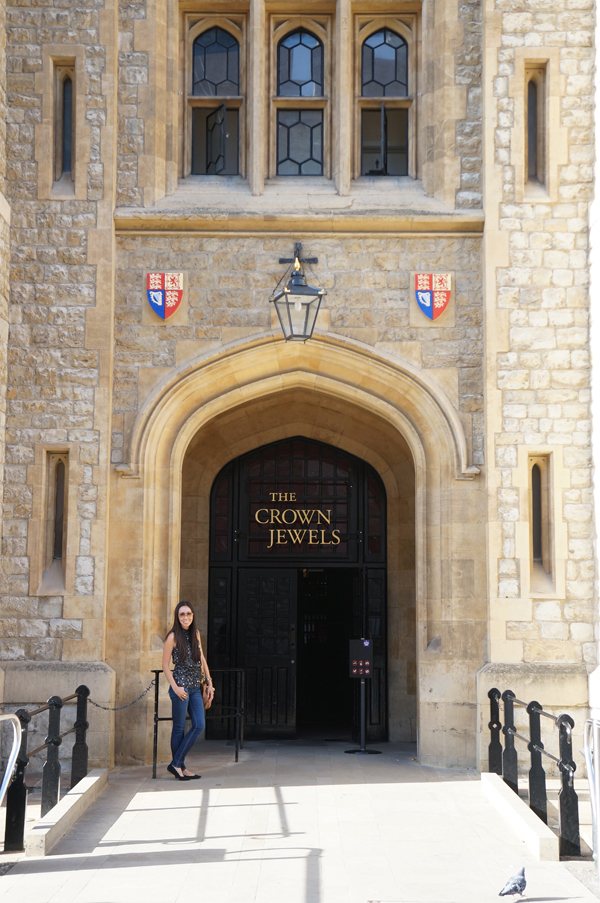 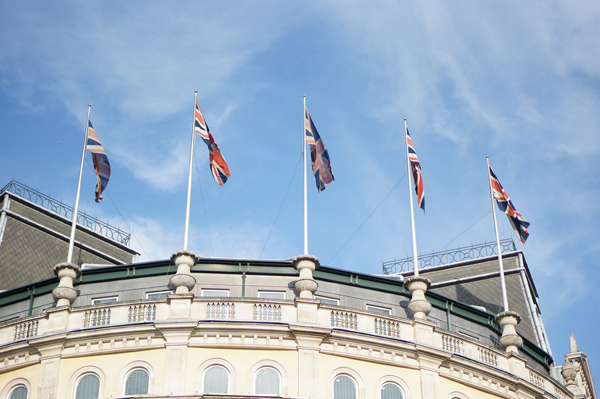 You call people English, not British, FYI, only Americans are the ones who call the Brits, I mean, English, British.  I was happy to return four years later, much sooner than I thought to enjoy this beautiful city.  London is just a 50 minute flight from Dublin so after our Ireland trip we decided to explore London since Melayne has never been.  If you fly into LHR, there’s the Heathrow Express train that takes only 15 minutes above ground and 20 pounds to take you into the train station at Paddington in London.  You can then get a cab to wherever you need.  Super fast and really affordable, the best way to go.

This is my friend Hitch, also known as James.  He is an Irish boy living in London, and a friend I met four years ago when I was in corporate marketing helping open up the London base.  He was spelling Fulham to me, and when he said the letter “H” it sounded like “Hitch” and I wrote, Fulhitcham.  A little confusion back and forth made us realize that he was saying the letter H.  And so, I gave him this name.  I adore old friends, even when they have the guts to ask if you’re wearing pajamas when you’re wearing flowy jogging pants.  That English bluntless, sheesh – wouldn’t sound as nice if they didn’t have a nice accent to get away with it. 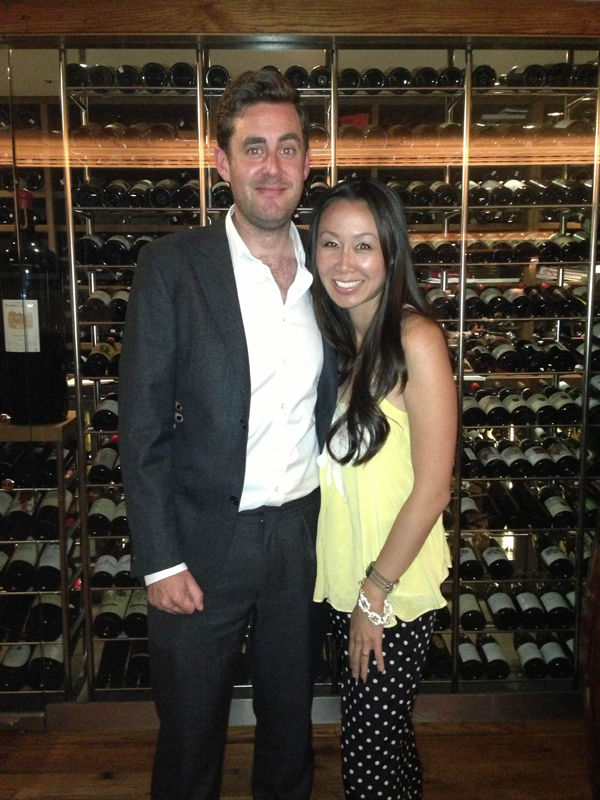 Melayne and I jumped on a double decker Big Bus Tour to enjoy the sights.  Your 24-hour ticket doesn’t start until you get on your first bus stop and they scan it.  We got the 48-hour pass. 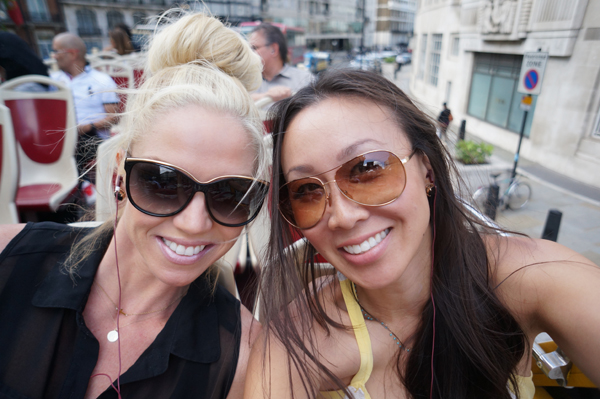 We were suggested by a sales person from Fortnum & Mason to check out Sketch.  Um, let’s just say the place is a trip, like Alice in Wonderland on acid.  The egg pods?  Oh, that’s the bathroom and that’s where you do your thing as a man talks to you and tells you what type of animal you are hatching into. 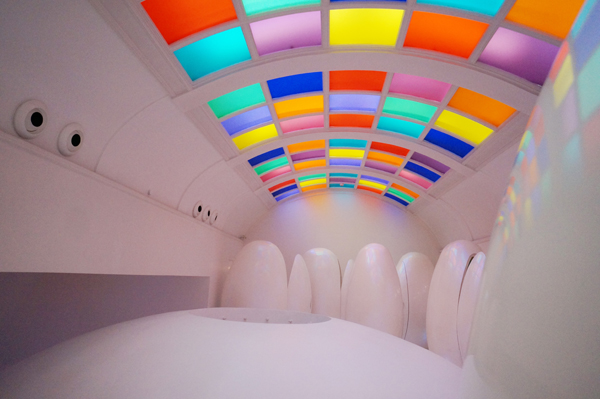 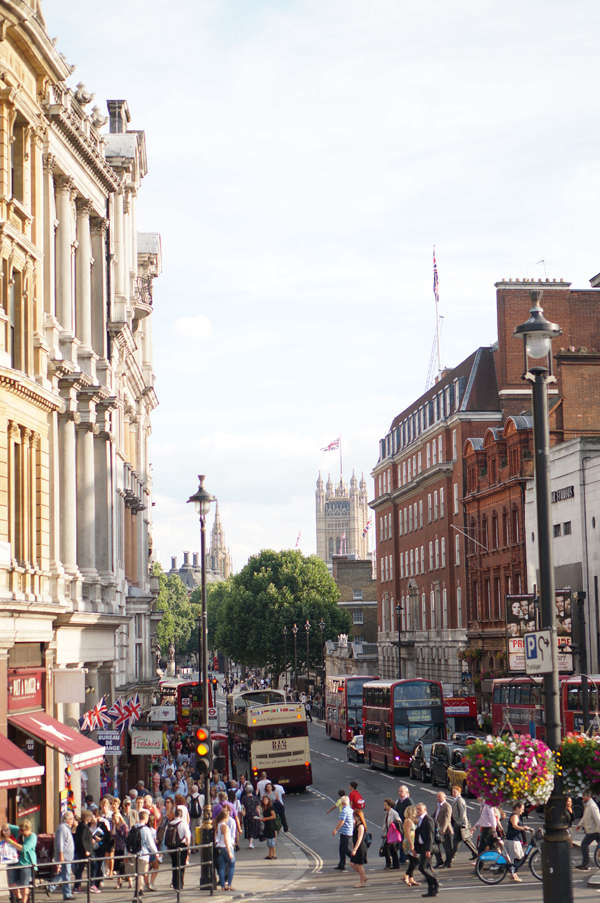 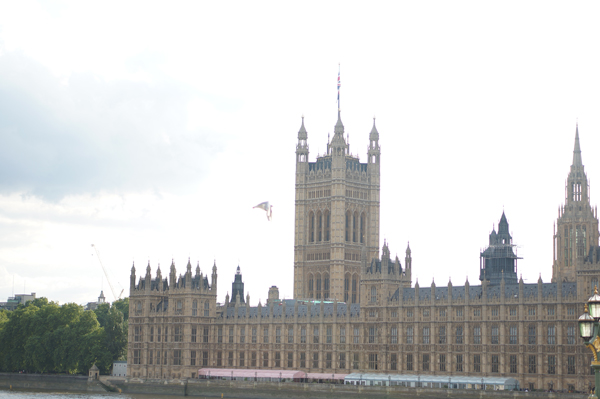 We also saw the changing of the guards at Buckingham Palace which I was thrilled to finally see.  When I went in October they had just changed the schedule, wasting my time of freezing my tush off as I waited at the gates.  Make sure you check the schedule and times before you go! 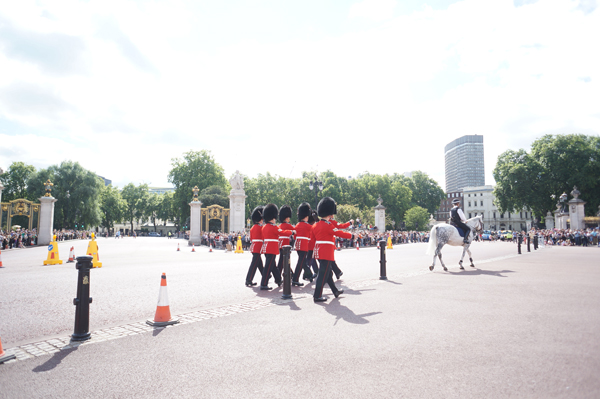 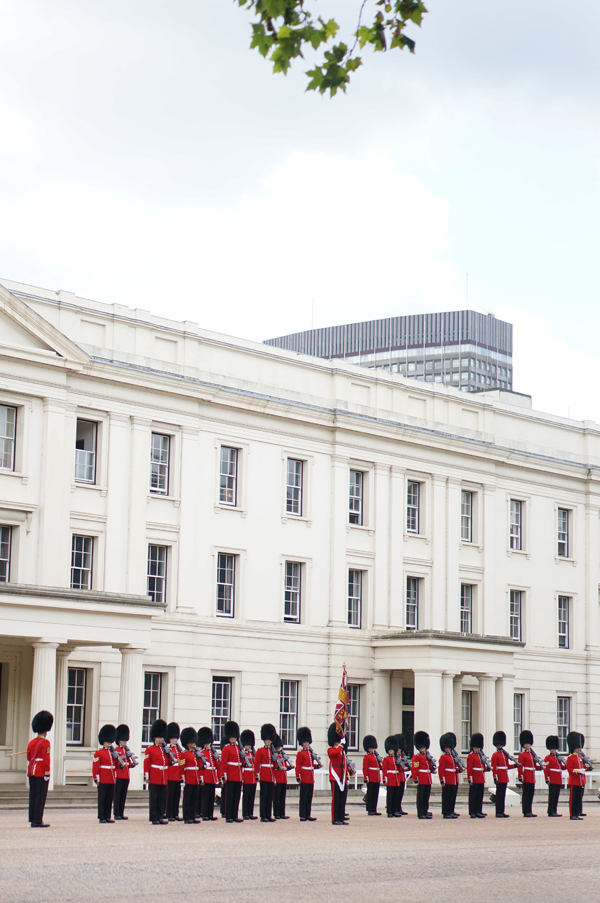 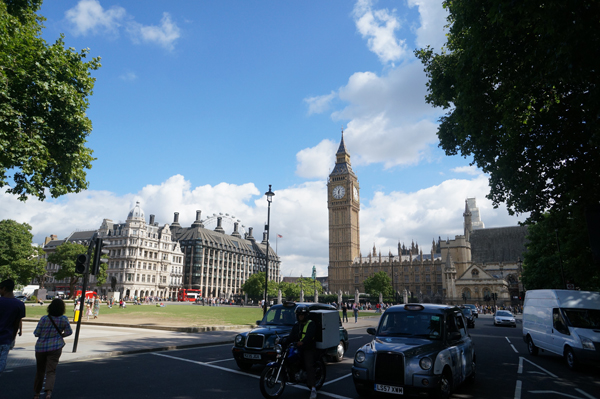 My favorite structure in all of London, Westminster Abbey.  I think I love it so much because of all the royalty happenings that have taken place here.  I love the royals! 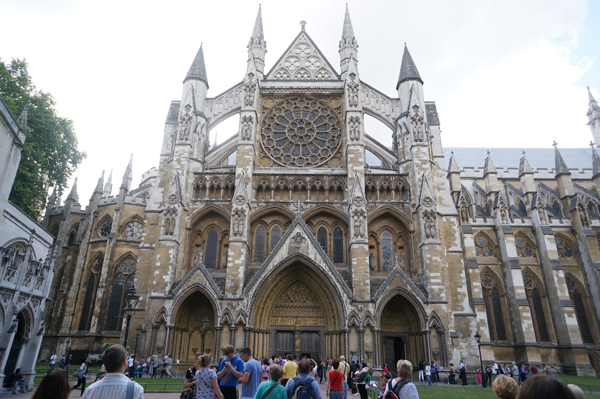 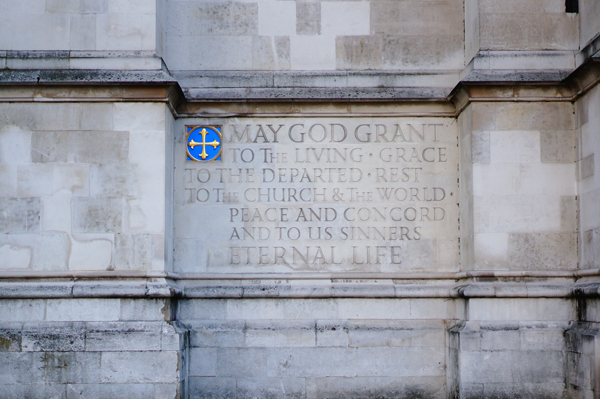 This is on the side of the building and I had to take another photo of it.

Melayne also had this thing with jumping in front of things – castles, structures, it was hilarious.  By the fourth time I had to time it, I nailed it and I could probably catch her in perfect jumping form by the first shot.  My speedy trigger finger helped especially in very busy situations when there were a ton of people observing us crazy Americans. 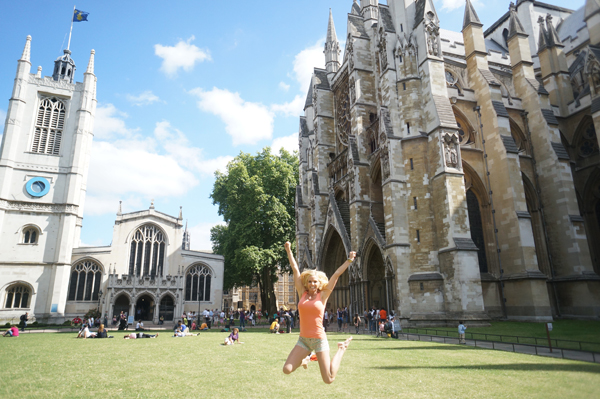 After hot dogs on the lawn of Westminster, we jumped on a little cruise that was included in our Big Bus Tour and headed over to the Tower of London.  Here’s the London Eye. 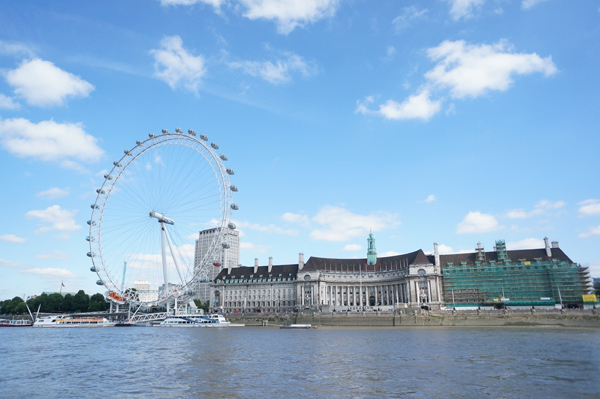 This is not London Bridge. I repeat, Americans, stop getting it confused.  This is the Tower Bridge, it’s beautiful. 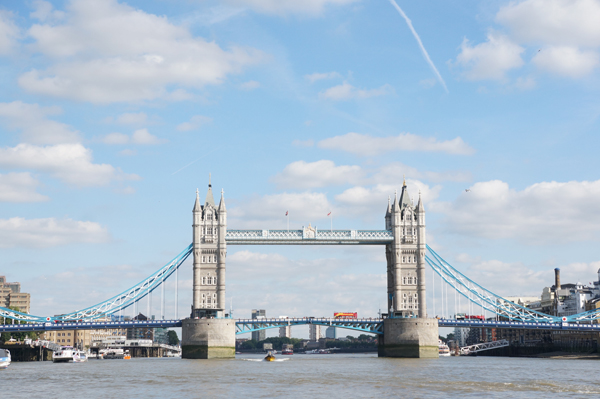 Now this is is the London Bridge.  Not so impressive right?  I know it seems suiting that a nursery song would be after the pretty bridge, but it’s not.  The bridge is even labeled probably due to people mistaking it constantly, can you see it below the arches? 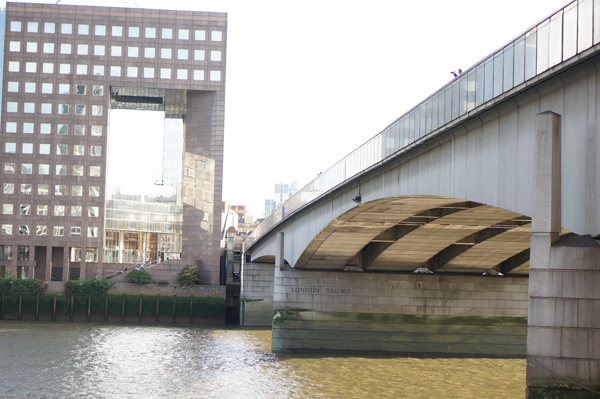 Behold, the Tower of London!  Where the kings and queens lived, beheaded people, where hangings occurred, lots of murders of royalty and well, home to The Crown Jewels. Built in the early 1080s, it’s been lived in by successful monarchs. It was spectacular to check out especially since I hadn’t done this the last time I was here. 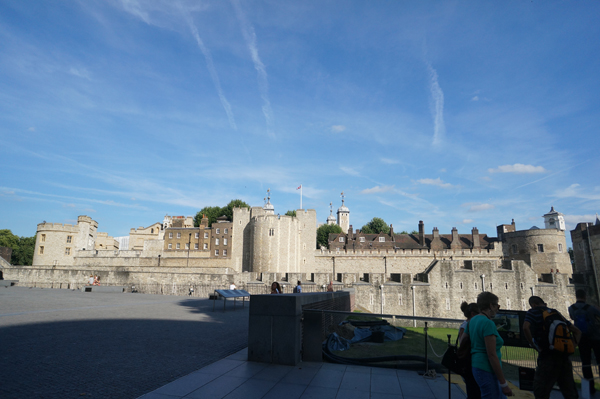 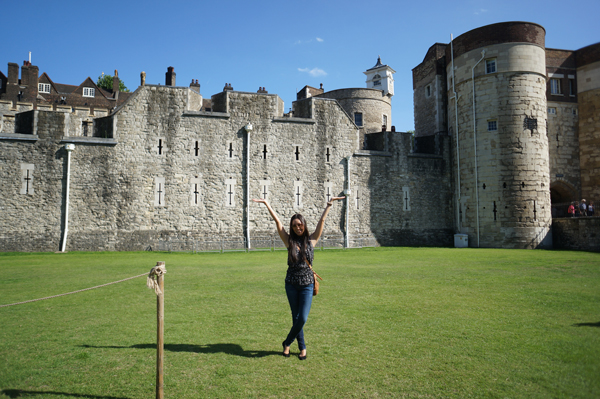 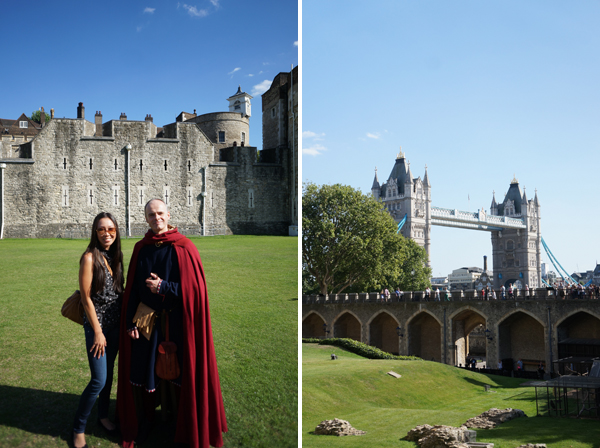 I was not allowed to take any photos inside – just incase I were to attempt to pull an Oceans Twelve. 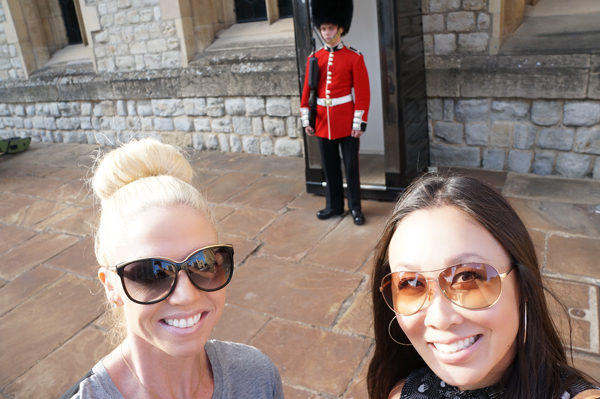 This guard was totally looking at our selfie screen by the way.  I’m sure he was super curious how my LCD screen flipped up on my Sony NEX-5R so we could see ourselves. I tell you, that selfie screen sure has come in handy!

We rode the tube and walked through Kensington Gardens, another favorite place of mine.  This is where lots of royalty have lived, including the late Princess Diana until her death.  It was closed by the time we got there, but you can’t do London in 3 days, there’s just too much to see.  We walked all the way through Kensington Gardens and into Hyde Park before shopping for the evening and retiring to our hotel, Flemings Mayfair. 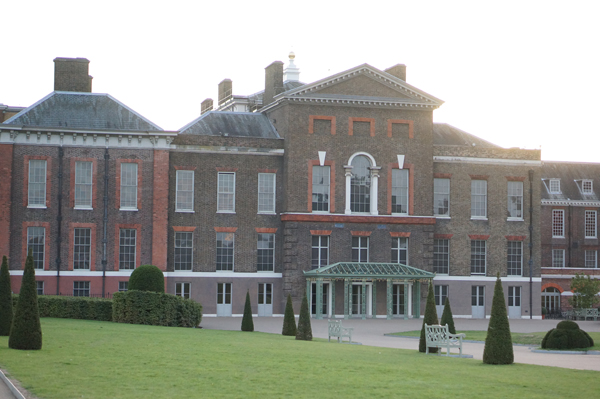 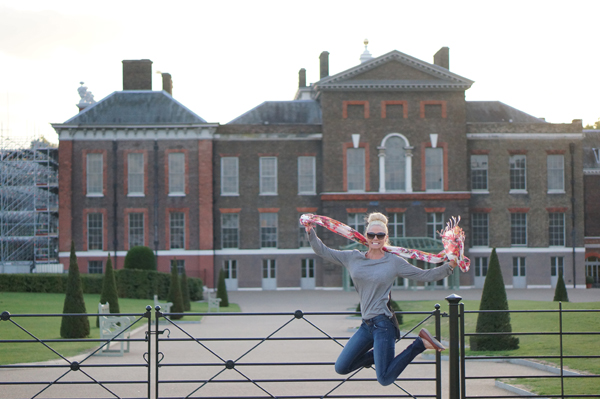 London, I hope to see you again real soon, you are just as lovely as I remembered.

Diana Elizabeth was told that Americans stand out because we are well manicured and groomed with good hair and makeup, and we also have straight white teeth.