Skip to the content
HomeLifestyleLASIK in the a.m., Movie by p.m. 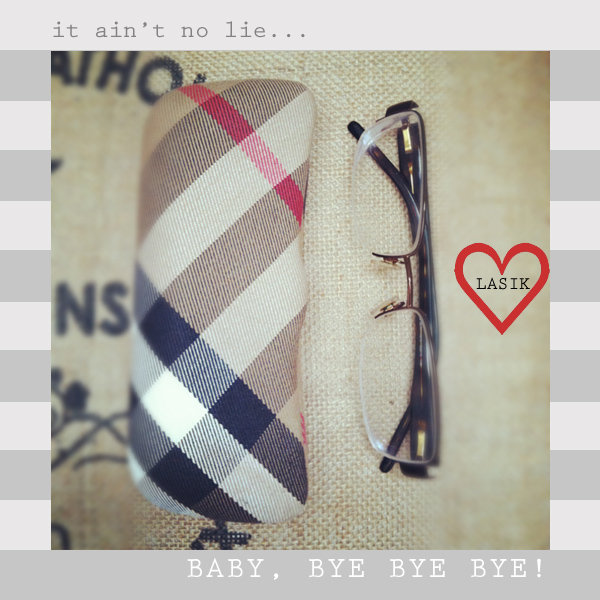 In preparation for my LASIK that took place last Friday, earlier that week I started tossing out my contact solution, contacts, and cases in the trash.  It was almost like I was moving on after a breakup, which if you think about it, I was.  It was just like one of those prolonged relationships where you fear so much of the future so you’d rather just suffer in the now and tolerate it, and you think you can’t live without them but you realize there is a better solution or fit out there that will make your life easier.  Wait, what were we talking about, exes or contacts?  LASIK, right.

I started wearing contacts at 15, my sophomore year in high school when I realized I couldn’t see the whiteboard very well from my seat.  Growing up I was warned by my parents that I’d have to probably wear glasses since my dad did – but I thought that was just to get me from sitting so close to the TV.  And when that day came, I physically and mentally made myself prepared to shove a contact straight onto my eyeball despite how some at my age couldn’t do it.  Cause you know, in high school wearing glasses isn’t really that cool – at least, not in my world.  I finally got glasses before I left to college since my dad made me in fear that I’d still need a backup should something go wrong in college.  I started off with a -1.25 vision which then gradually increased to -5.0.

I could only see maybe 12 inches clearly away from my face and anything past that was blurry, but it’s not like I’d walk into walls, I just couldn’t see facial expressions.  For the 20/20 vision photographers out there, I can explain in lens terms – focus on a subject 12 inches away from you at maybe F2.8, no more than f4.

I waited so long, 15 years later to finally get LASIK cause I’m cheap, and sorta lazy, and apparently complaining was easier.  Remember, Mr. Wonderful urged me to do it and it was because of him I got this even though deep down I have always wanted it.  And for the many of you who have expressed fear I’m going to explain a few things to you so you can make the right decision for yourself.  I also should remind you that if you touch your eyeball all the time, it’s not a big deal.  And, if you hate the whole blowing puff of air on your eyeball during yearly check ups like I did (and like Rachel on Friends – best video ever if you haven’t see it!), but you still do it, you can do LASIK and there is no puff of air and you never have to do it again!  Also, I am pretty certain there’s no death rate associated with LASIK, so you’re in the clear.

Due to the response of curiosity, I figured I’d do a LASIK walk-thru and educate you on what happens and my experience.

Again, it’s absolutely painless.  There is nothing to be afraid about.

The doc talks you through everything and as soon as I sat up, I could see so much clearer, not 100% yet, perhaps 20/30 at first and a little cloudy like you have Vaseline on your eyes.  Over the next few days it became better and clearer.  You are asked to sleep and nap in these ridiculously sexy eye goggles and that’s just to prevent rubbing your eyes and possibly shifting that top eye flap.

Afterward I was also so tired and I could barely keep my eyes open from the sun (so bring sunglasses or the place will give some disposables for you), and I slept for hours after from the Valium and my eyes were tired and a little sore but after a few hours, totally fine.  In fact, Mr. Wonderful and I saw Snow White and the Huntsman movie that night.  Thank goodness because that will hold me over until the fifth installment of the Twilight series this fall.  Anyway…

Thank you to my friend Michelle, another photographer, who told me to check out Barnet Dulaney Perkins.  They were down the street from my house in Phoenix which was awesome and they have the procedure room right there.  Dr. Perkins was the one who conducted the LASIK on me.  I’d say shop around for good pricing. I had two quotes but BDP had a special that put them $1,000 under the other competitor and so that choice was made for me.  If you’re wondering about costs I believe normal is $3 to $4k total for both eyes.  Insurance doesn’t cover it, so it’s straight up cash.  And again, no tax write off even though I’d love to explain to the government that I need my peepers to see clear in order to take a clear photograph, but whatever.  I guess that’s what auto focus is for.

If you have any questions, leave a comment.  For some they don’t mind contacts or glasses but I believe that if it bothers you enough and there is corrective help out there that you can afford, why wouldn’t you do it?  It’s a life changer for sure.  I feel like Jesus touched my eyeballs and healed me of my blindness, ha. No more stumbling to the bathroom in the dark while being half blind.  I now tell Mr. Wonderful that I have “better eyes to see you with, my dear.”  I know, creepy.  I didn’t say LASIK would make me normal.

Diana Elizabeth says it’s time to turn those Burberry glasses into fashion glasses, but realistically, she’s not sure she even wants to go for the glasses look unless it’s for an audition part! 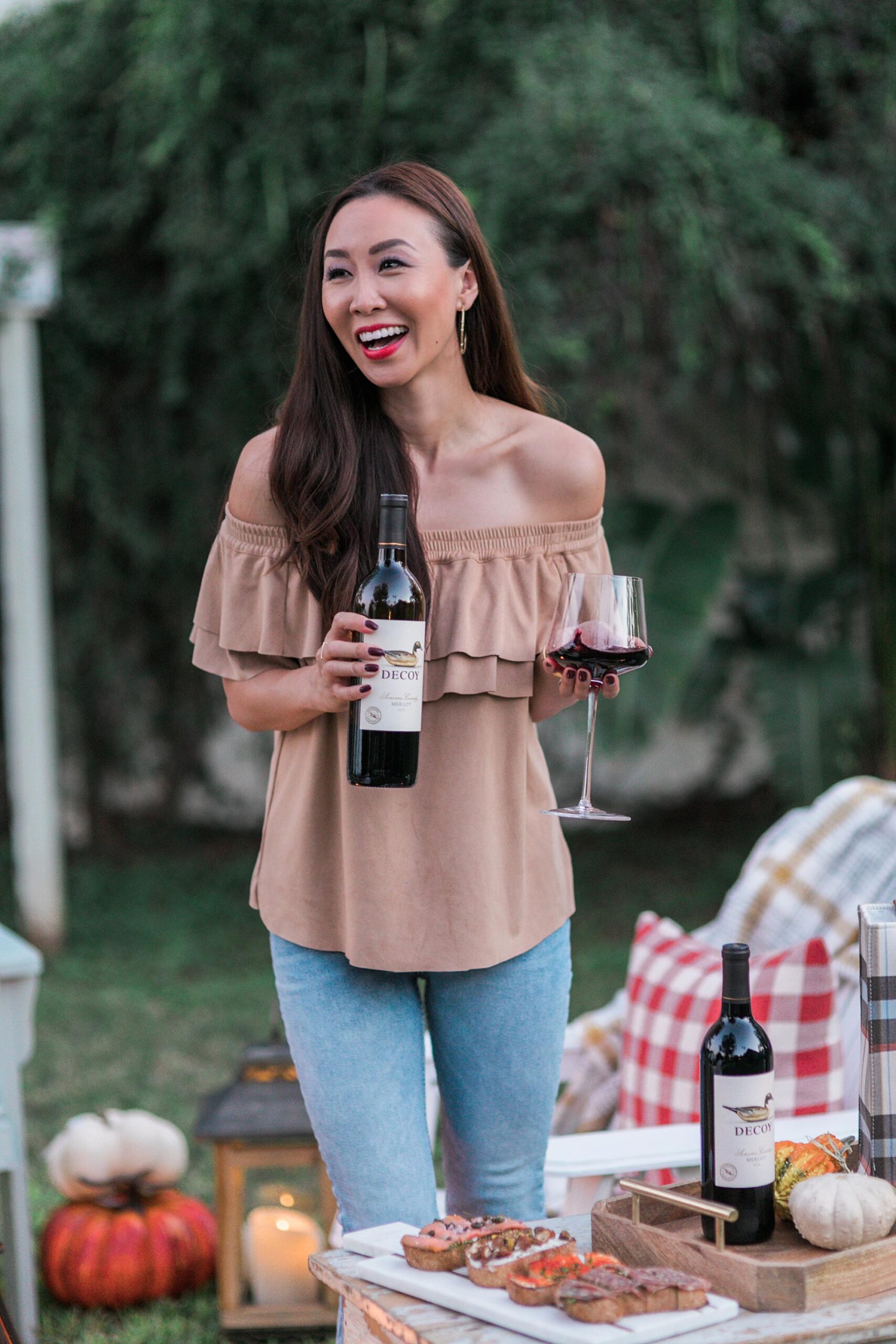 Fall for Merlot with Decoy – a Merlot Party

Yes, it is a Ryan Ray gallery in our home.  We’re newlyweds, wh

My 4-week Online Course in Review 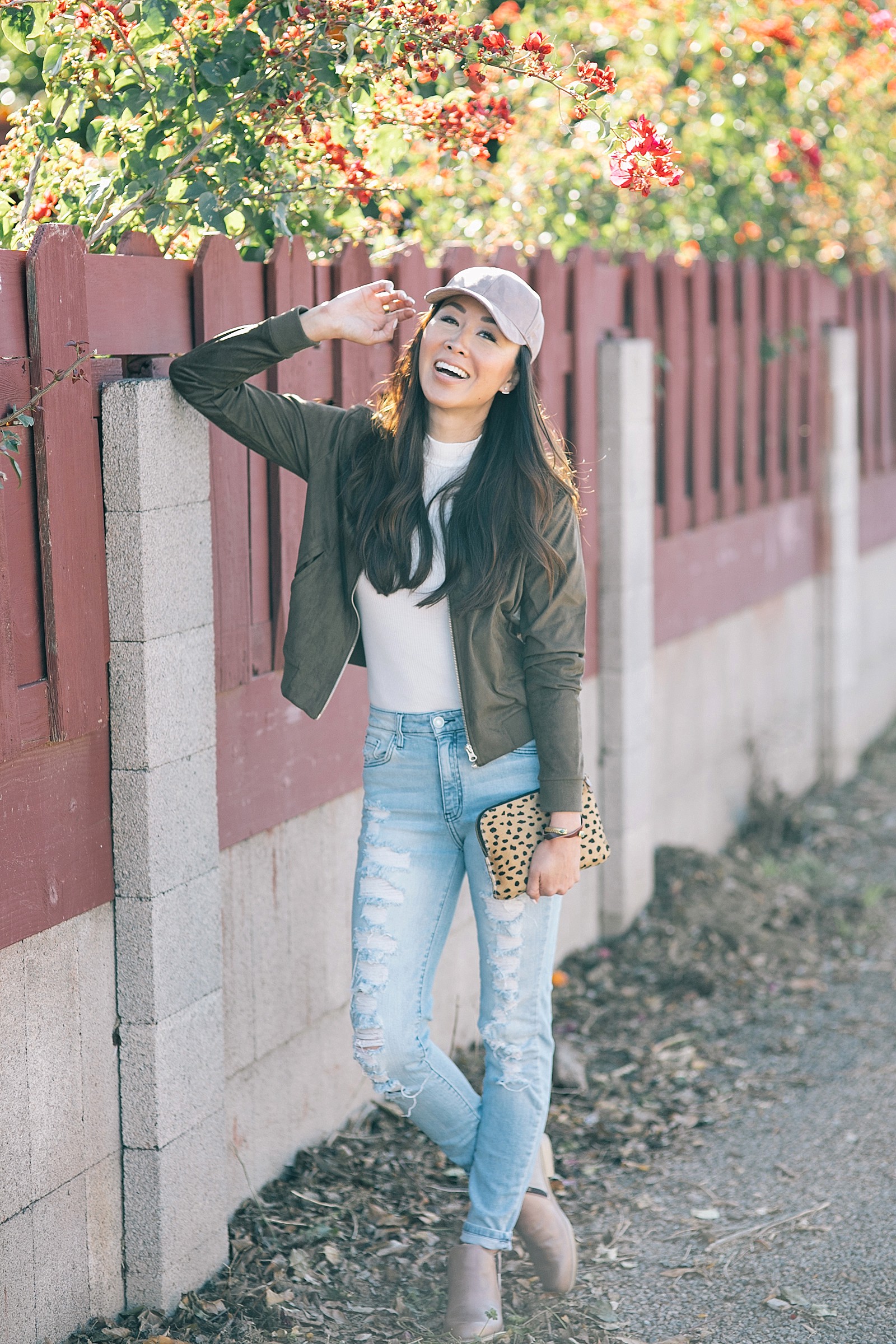 “I really don’t have that much stuff.  Everything I own,