The problem with an already done decorated house is… you try to find things to do.

I suggest we expand the home so I can have more rooms to decorate.  Our bank account says we need to save way way more because it would be a lot!

So the other alternative is to slowly replace things.  Tweak.  Move things from this room to that room.  Oh, you know, change clip on curtain rings to hooks. I’m now changing artwork from recognized catalogs to more one-of-a-kind stuff.  Warning: One-of-a-kind is freaking expensive.

Take for instance my need to replace this plaque in our dining room (iPhone pics):

Yes it’s from Ballard Designs and it’s for sale if you’re interested.  Come by and get it, it’s listed on Craigslist as well.

I found this beautiful oil painted, original, on eBay: 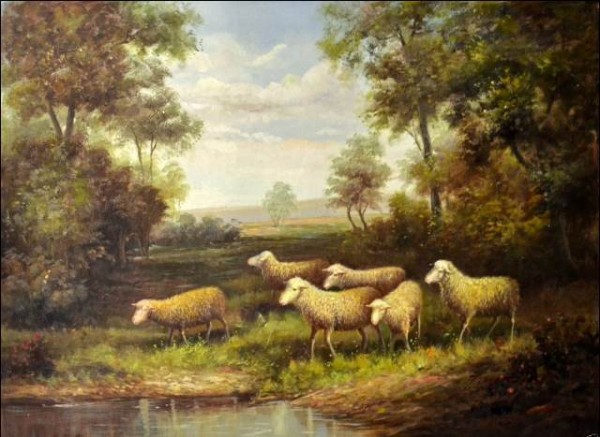 It reminds me of my time in Ireland.  So I bought it, duh.

Then I took it to Aaron Brothers and got it framed and the total was $2,000.  Yep.  No typo.  So I used a 50% off custom framing coupon.  And yeah, that still doesn’t take off enough 0’s for me.  But I did it anyway because I had no choice, I couldn’t just hang the artwork on the wall like a towel.  The art that came rolled had to be stretched on a frame and then I had to well, frame the dang thing.

And if you ever try to use that 50% off custom framing, note that it works for really cheap frames.  The ones you probably wouldn’t want to use or use for an art piece such as this.  So I bought the cheapest one as an outside layer and told them to throw it away.  Yep, that’s how you get around it folks – it’s legal, the gal suggested it to me.  I play by the rules.

So after three weeks we got it back and here is Mr. Wonderful holding it in place so I could snap a photo to show him what it looks like.

Ta-da.  So worth the $1k right?  Ugh.  Now do me a favor and leave me a comment to reassure me it was well worth it, and I also got reward points for using my credit card.

But I do love it.  And it will be a family heirloom because that’s what heirlooms typically are.  Over expensive pieces…

Diana Elizabeth is thinking of changing the white porcelain things out to something else.  Any ideas?

There are no comments on I overspent on a frame.