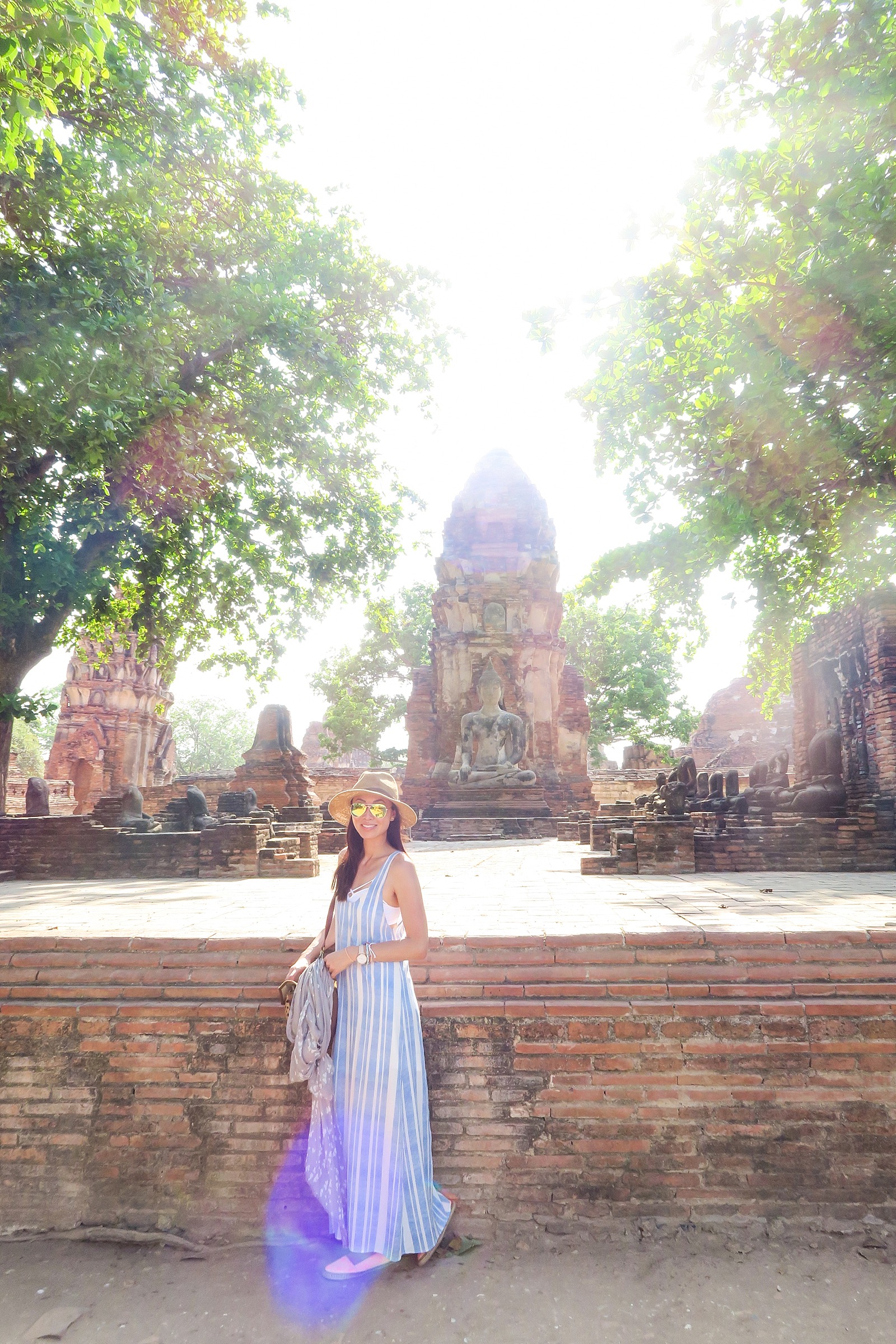 Sadly, this is the final post in a series of 5 blog posts dedicated to Thailand. I still have China coming up!

We continued driving to Ayutthaya, a home of a lot of Thailand (formerly Siam) history. You can see the old city ruins, from one of the wars with Burma (there were many). Also there is a gorgeous spot that resembled Europe which you know means I was in absolute heaven!

I felt right at home at Bang Pa-In Royal Palace, also known as Summer Palace – a mix of Asian and European architecture. This location is a palace complex formerly used by the Thai kings.

The palace had a very strict dress code for the entire grounds – not just the temple, and was checked upon entering. Thank goodness I wore a slip, they checked the sheerness of the dress and tied my scarf around my shoulders. I would have worn jeans and a wool sweater to see the grounds of Summer Palace – we rented a cart so we could cover the grounds quicker and get a breeze going. 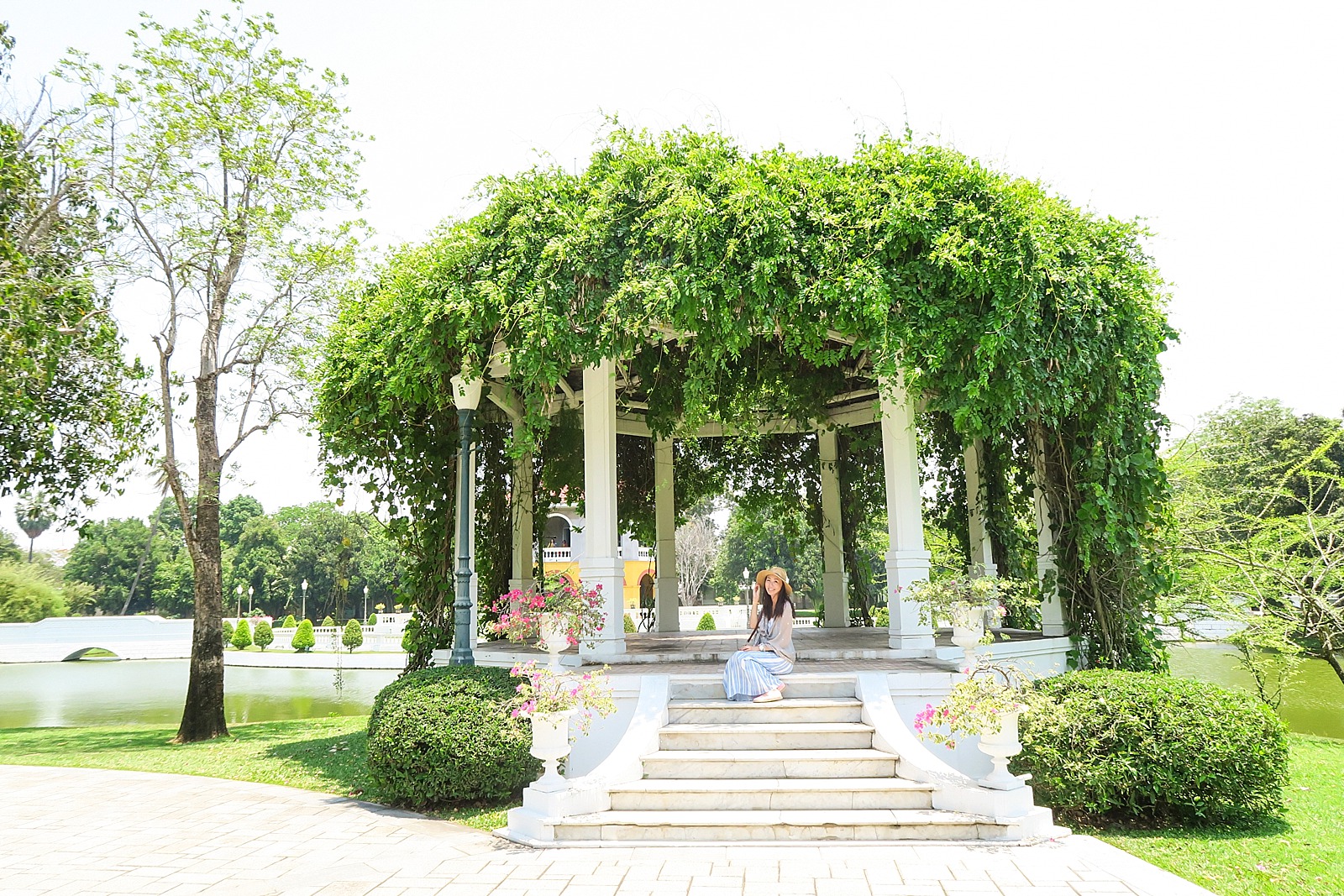 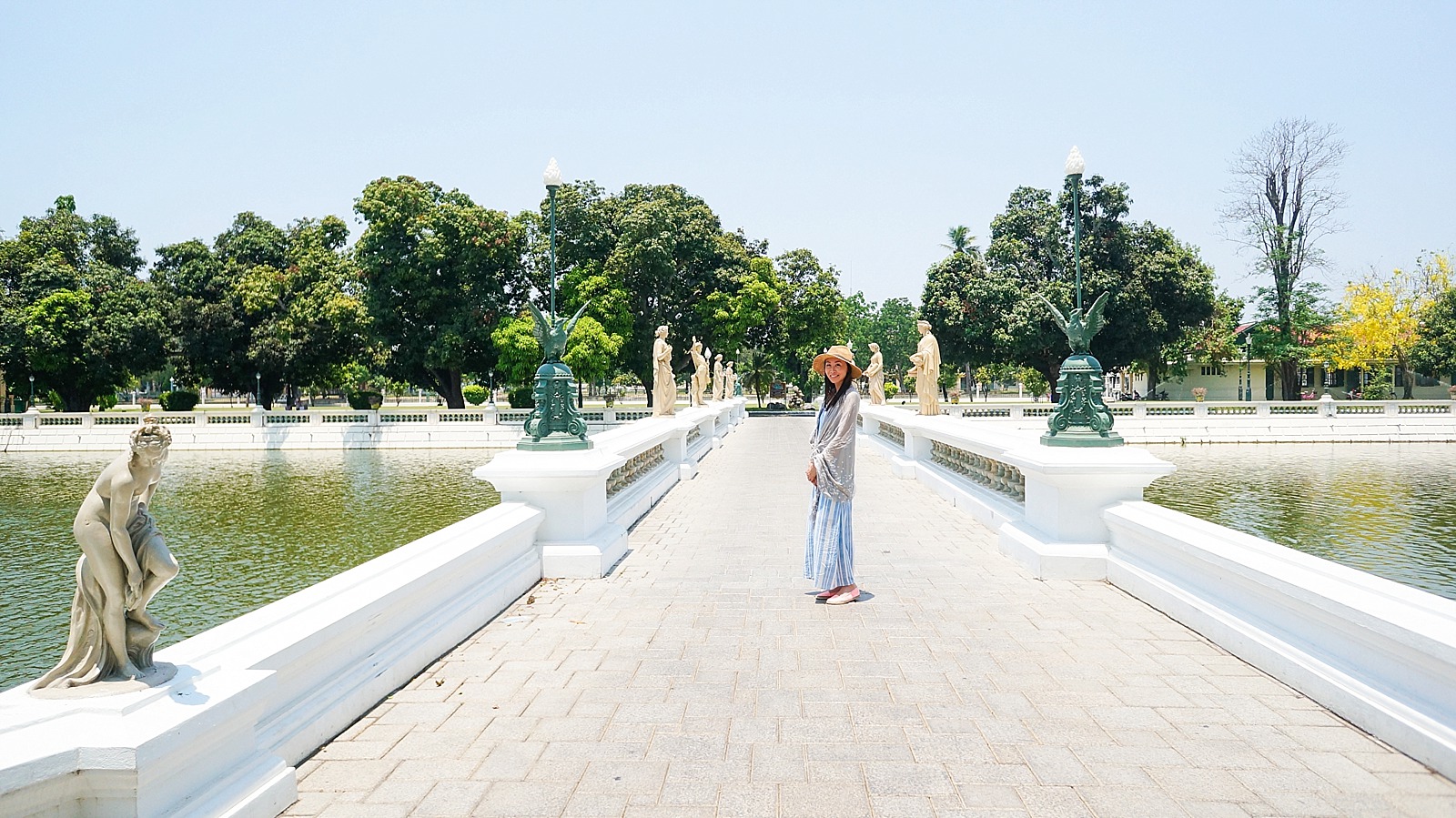 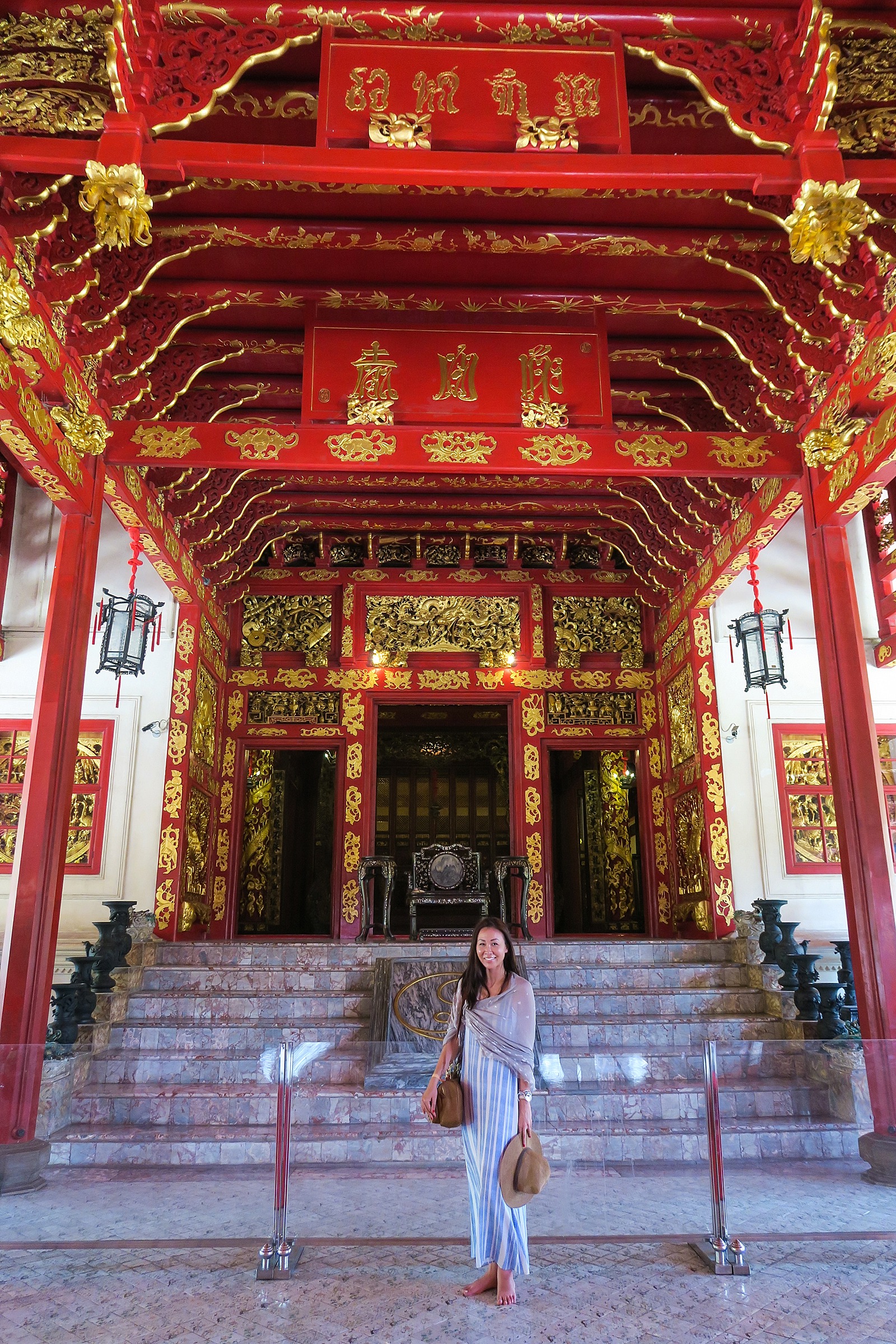 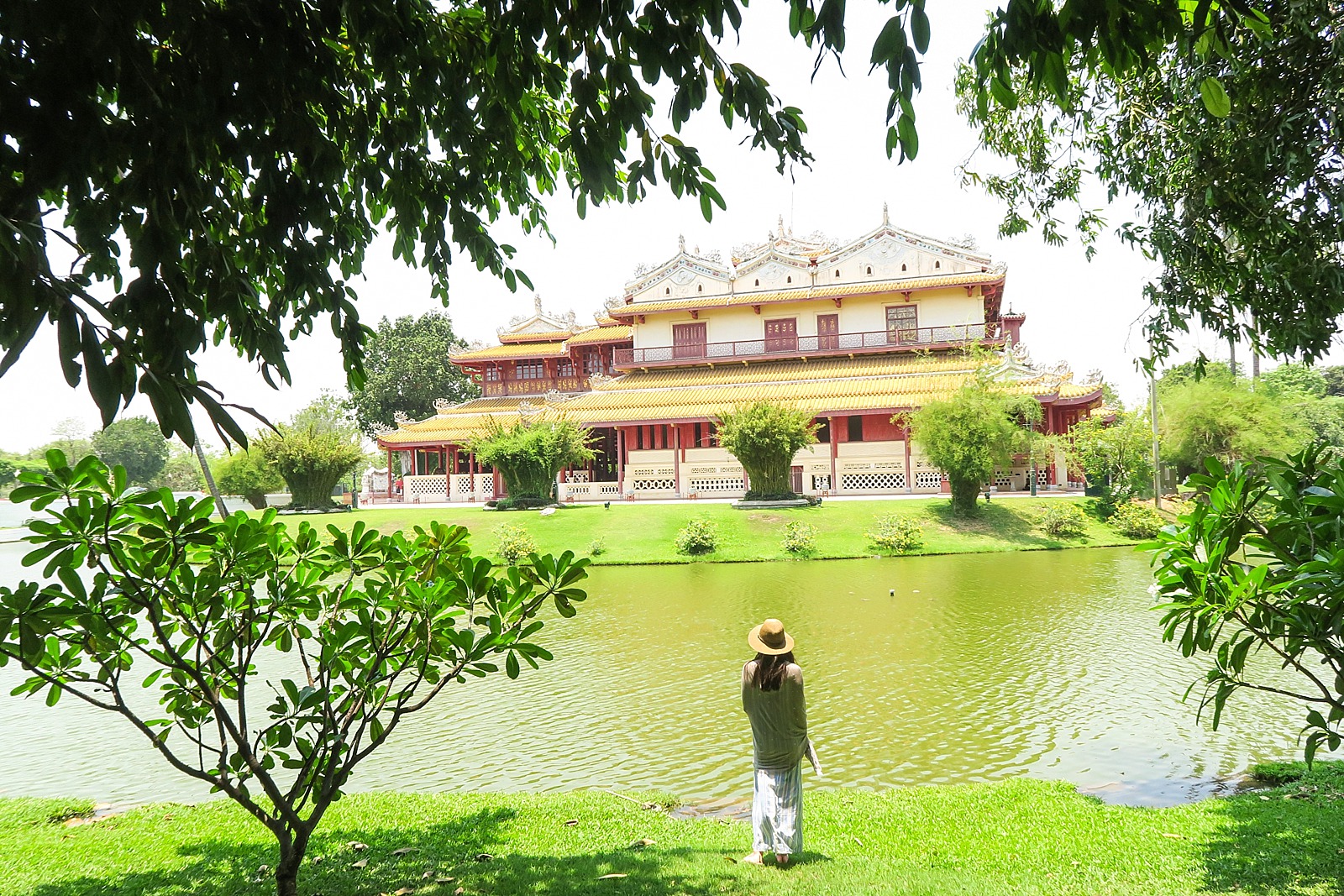 These are the ruins of the old city of Ayutthaya. The city was captured by the Burmese in 1569 and the historical park has a few park sites within. 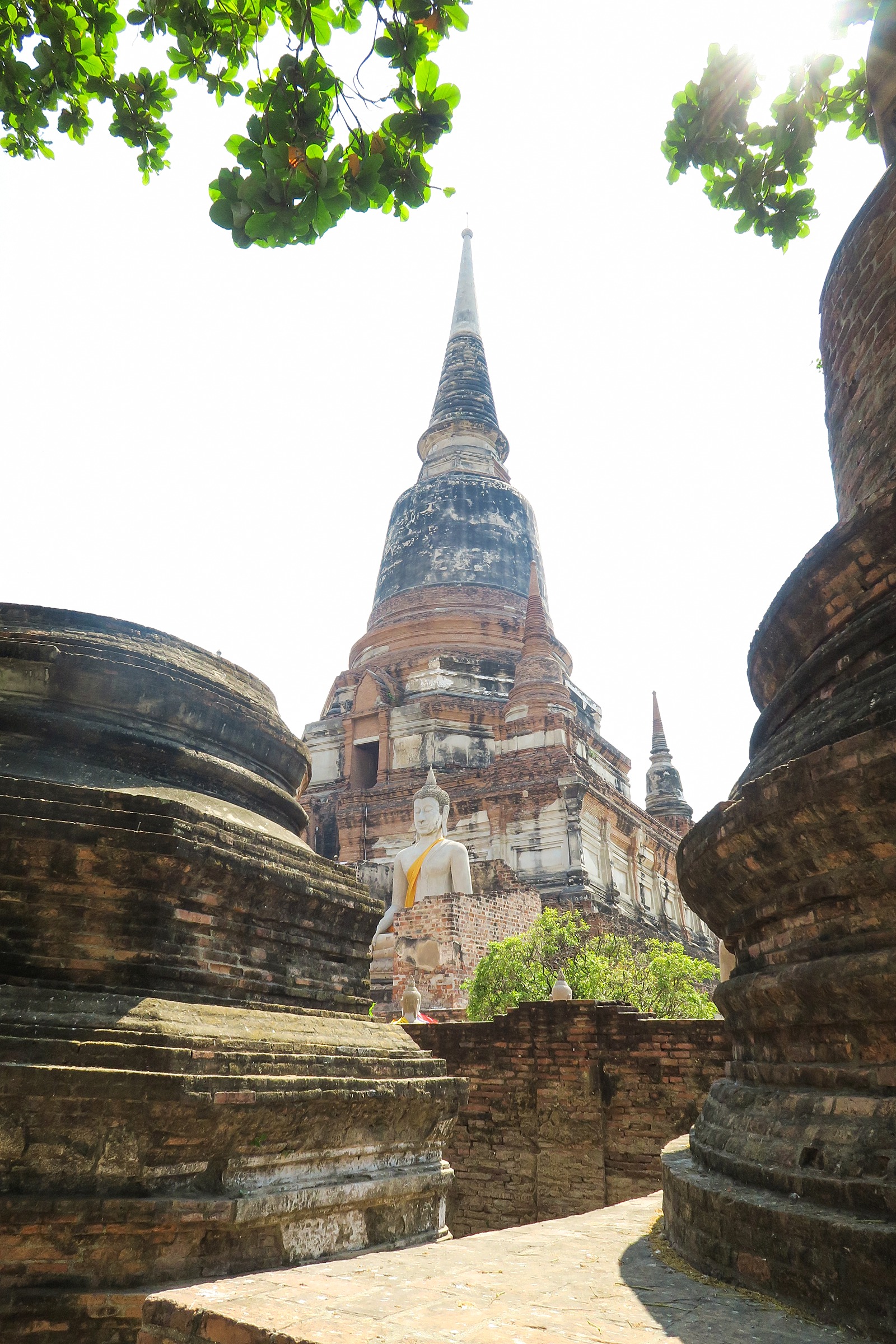 This one is Wat Phra Sri Sanphet – lots of stairs to walk up to see a few golden Buddhas.

This one is Wat Phra Sri Sanphet – lots of stairs to walk up to see a few golden Buddhas. Worshippers kicked off their shoes, paid for gold leafing to put on the Buddha statues.

Worshippers kicked off their shoes, paid for gold leafing to put on the Buddha statues. 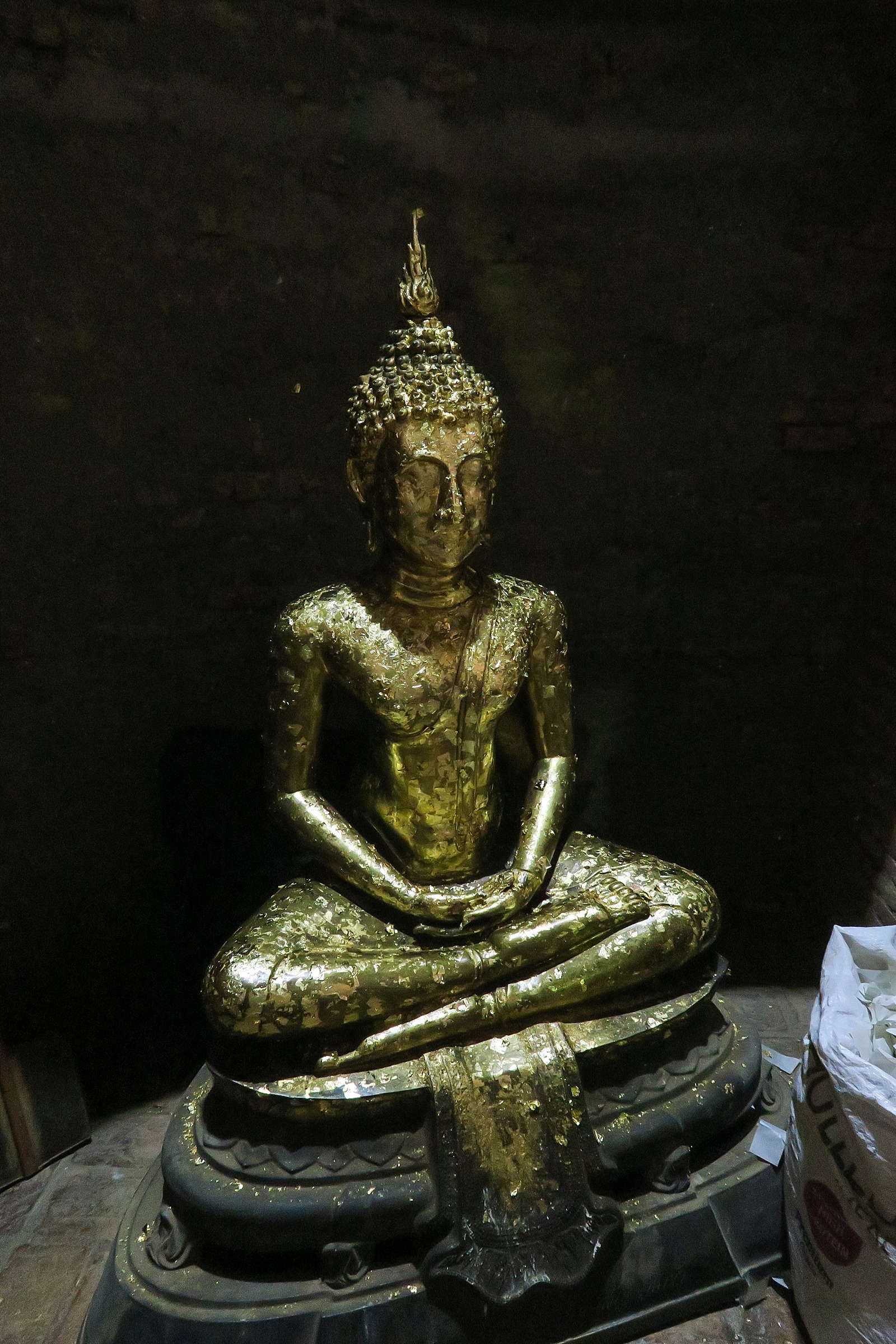 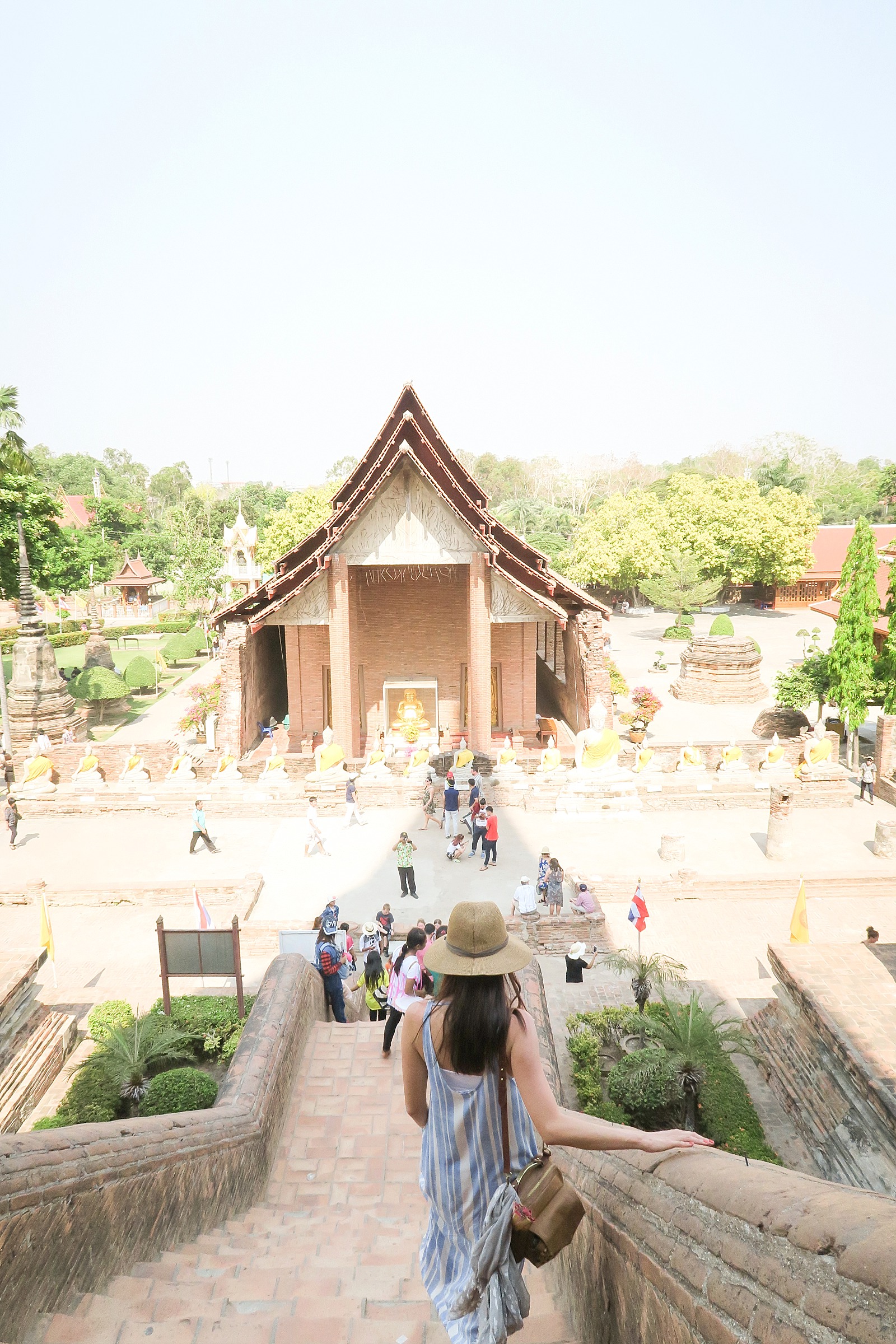 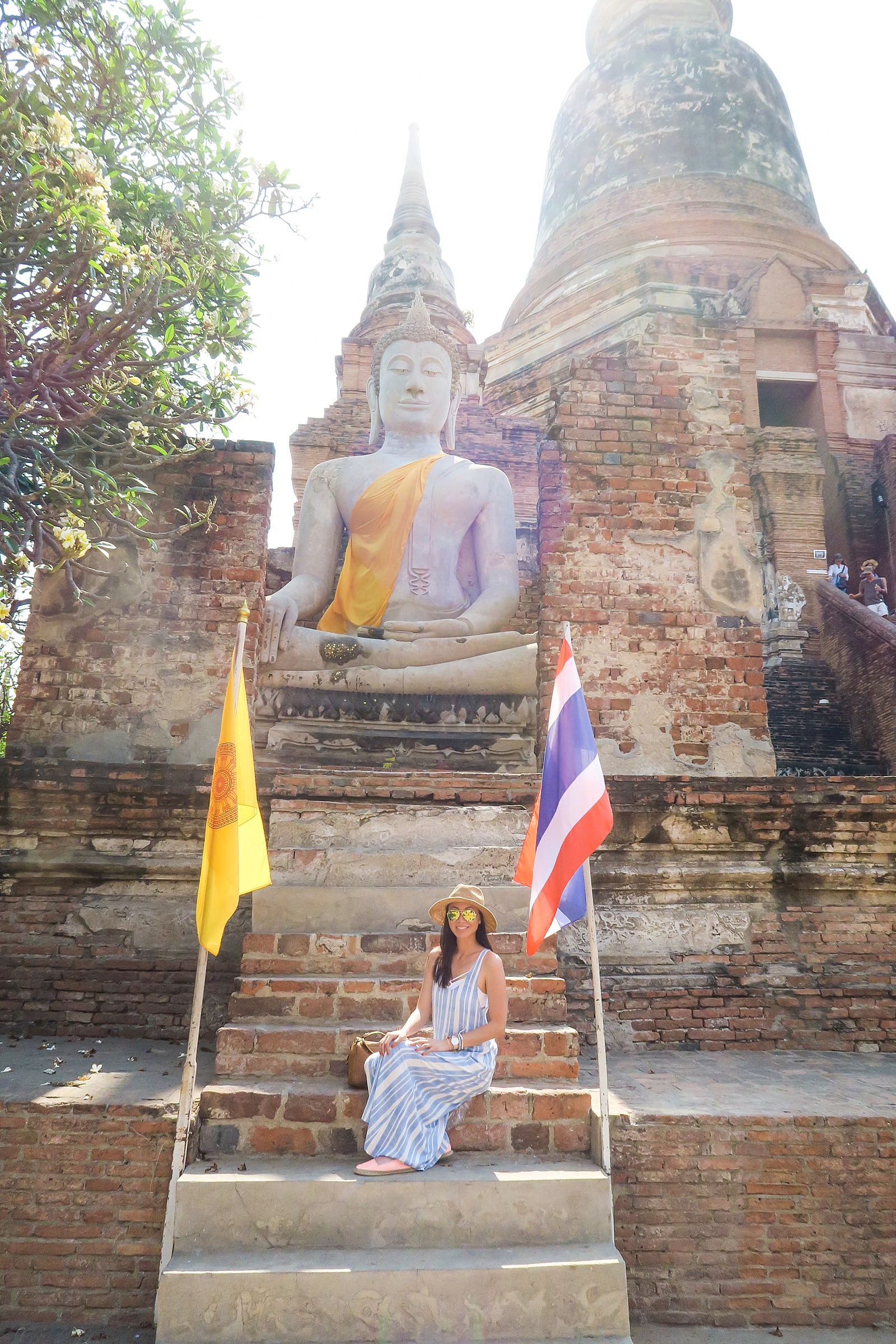 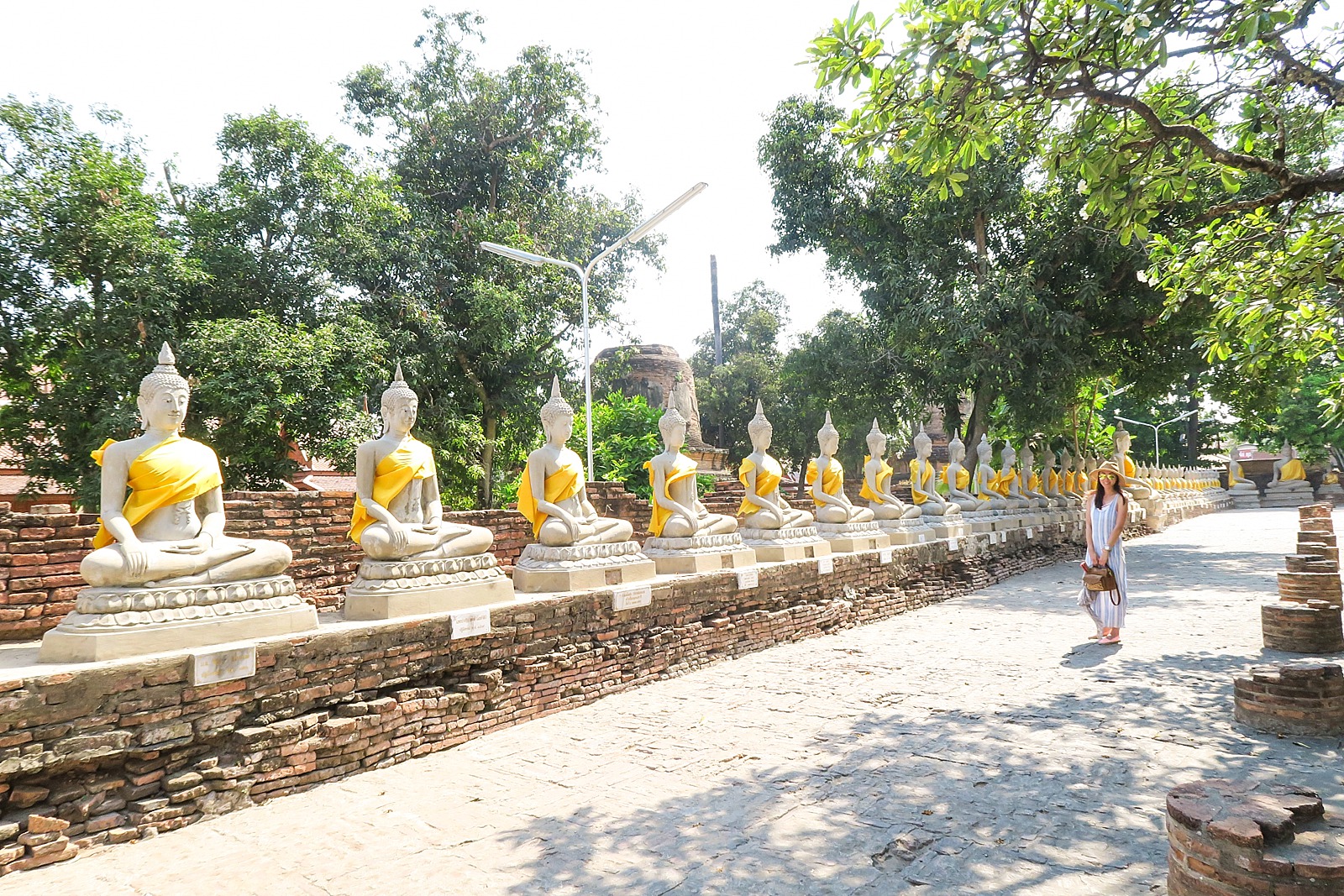 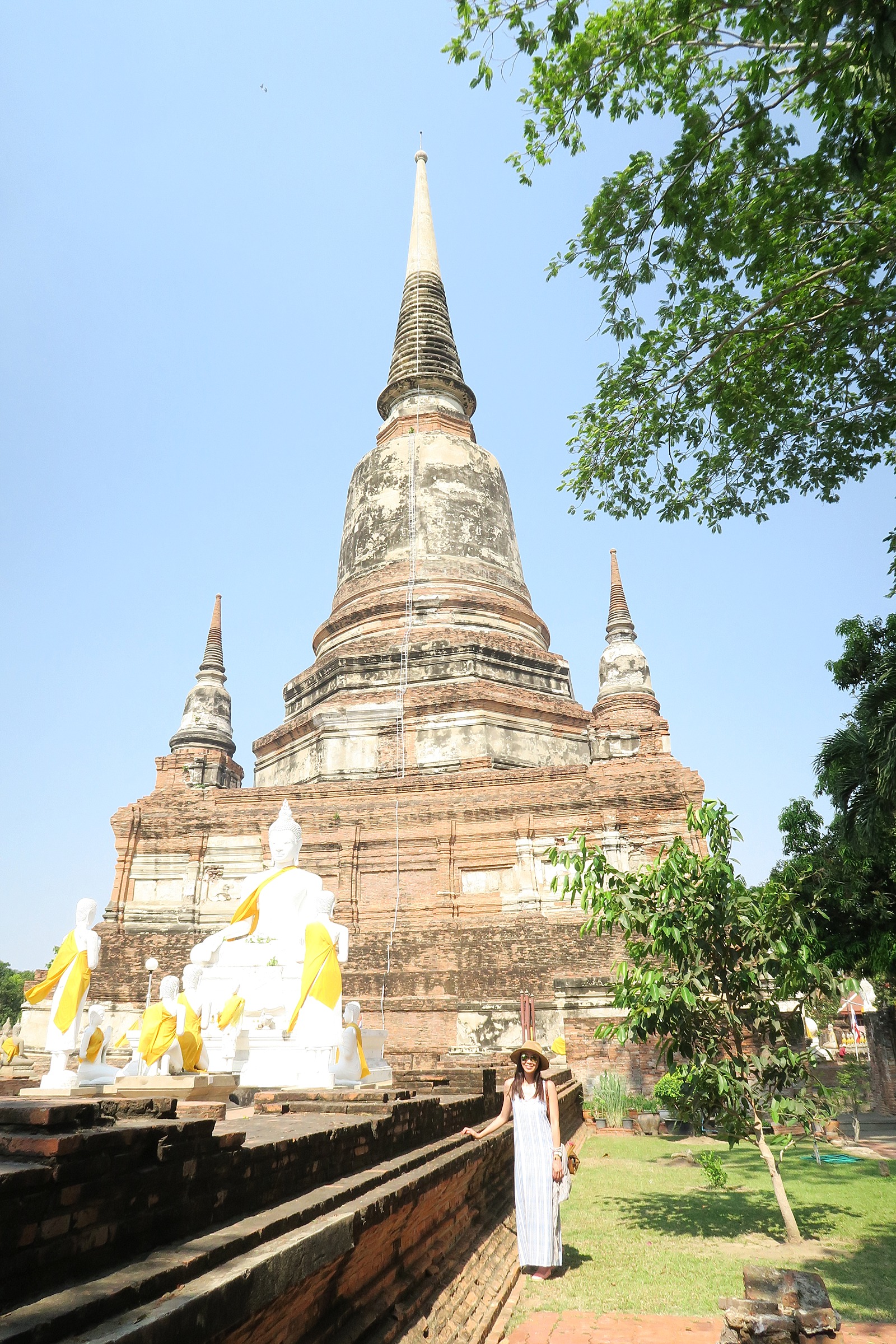 We jumped back on the bus to drive a short distance down the street to Wat Mahathat. 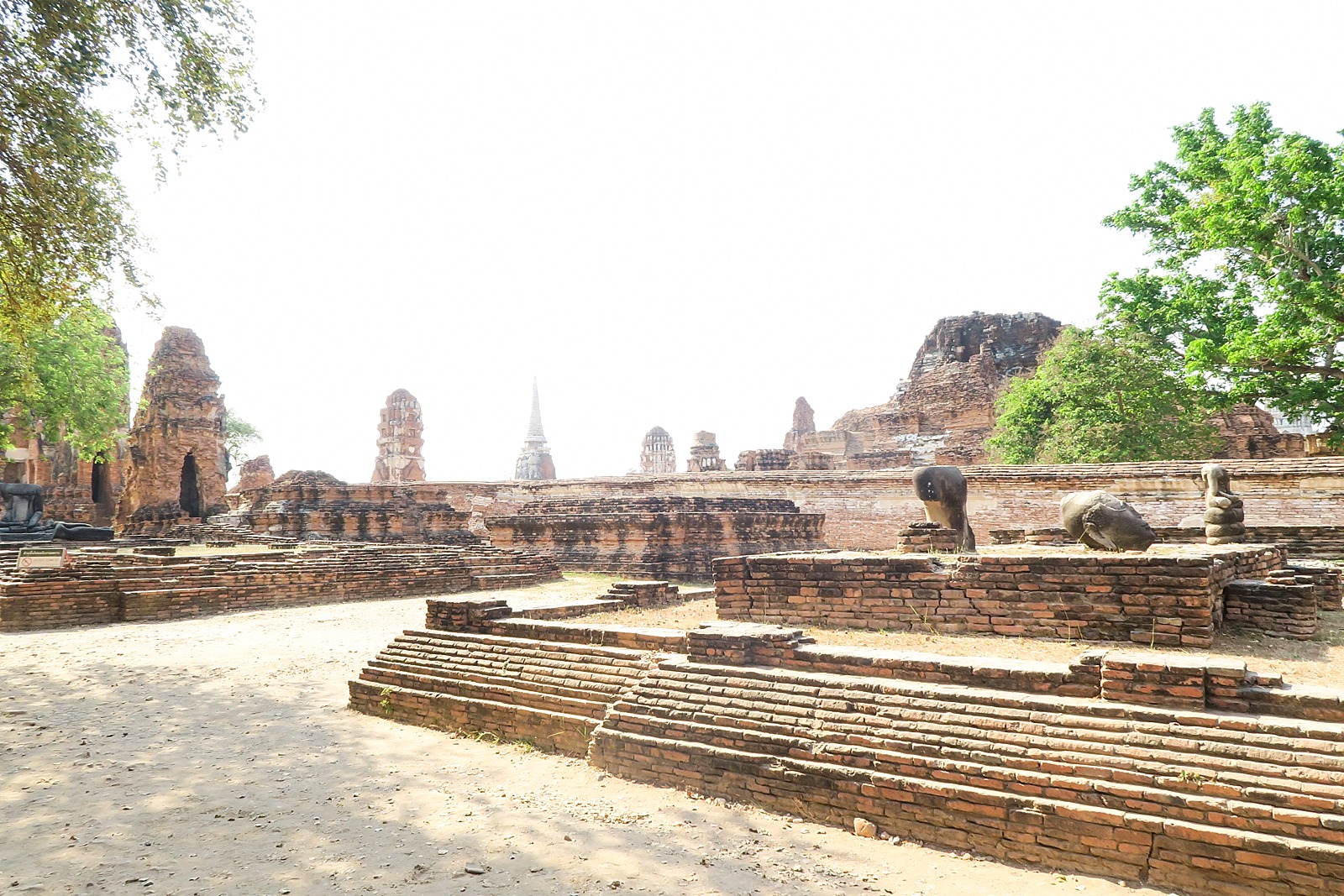 Check this out! The famous Buddha head in the tree roots! If you take a photo with it, you must kneel down as to stand over his head – there’s a sign that instructs you and there are also several workers on patrol to ensure you aren’t walking or sitting on the ruins and homoring the rules. 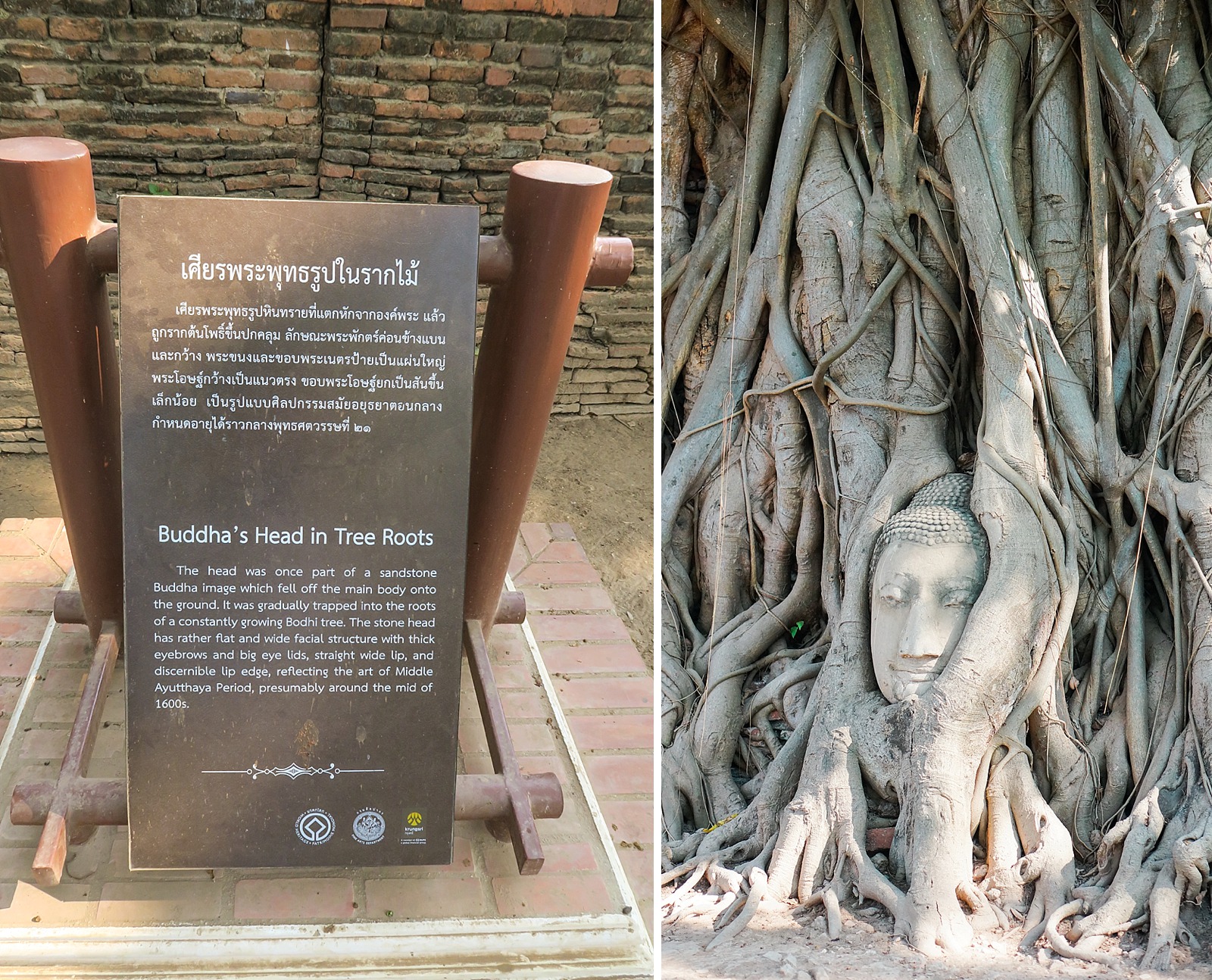 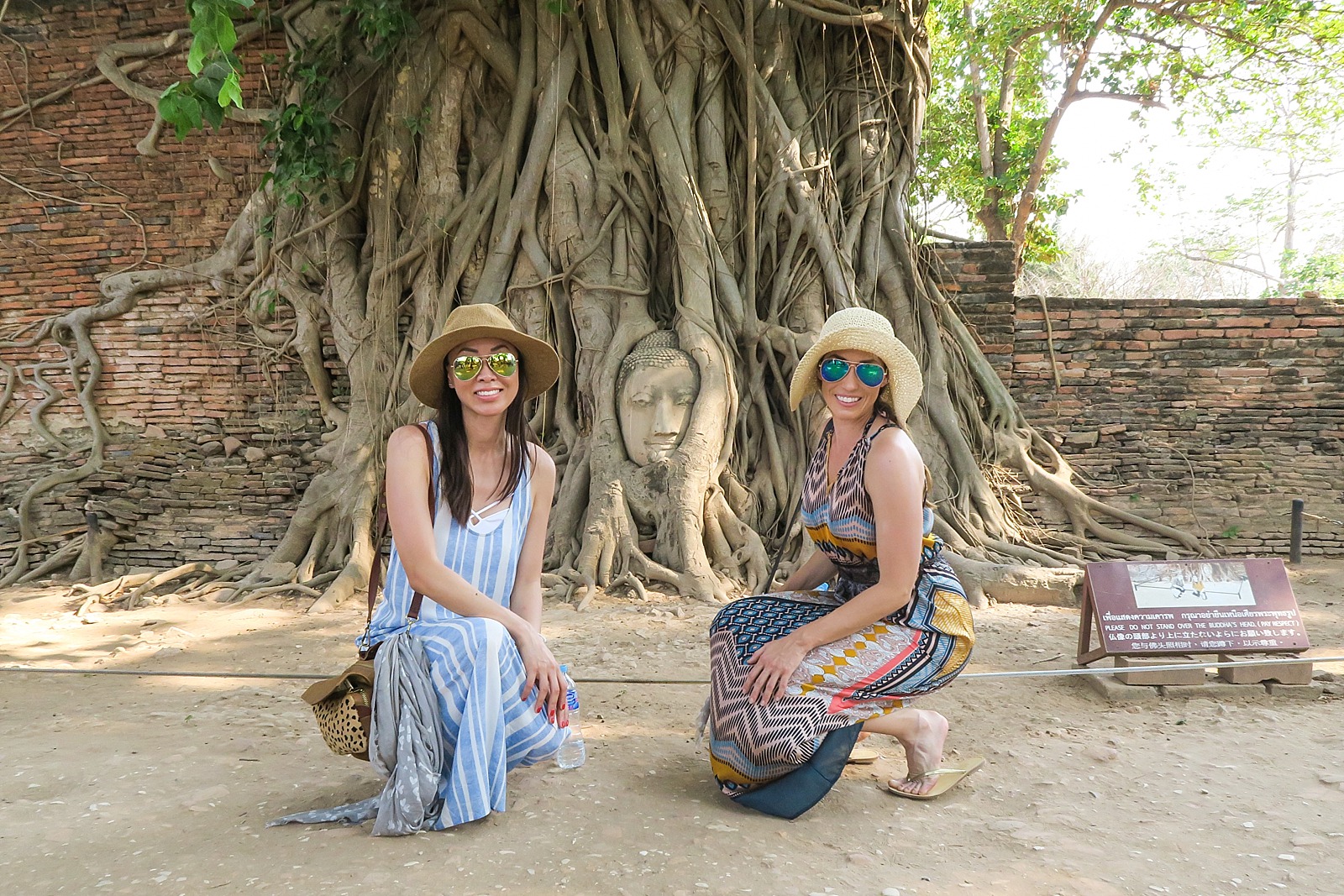 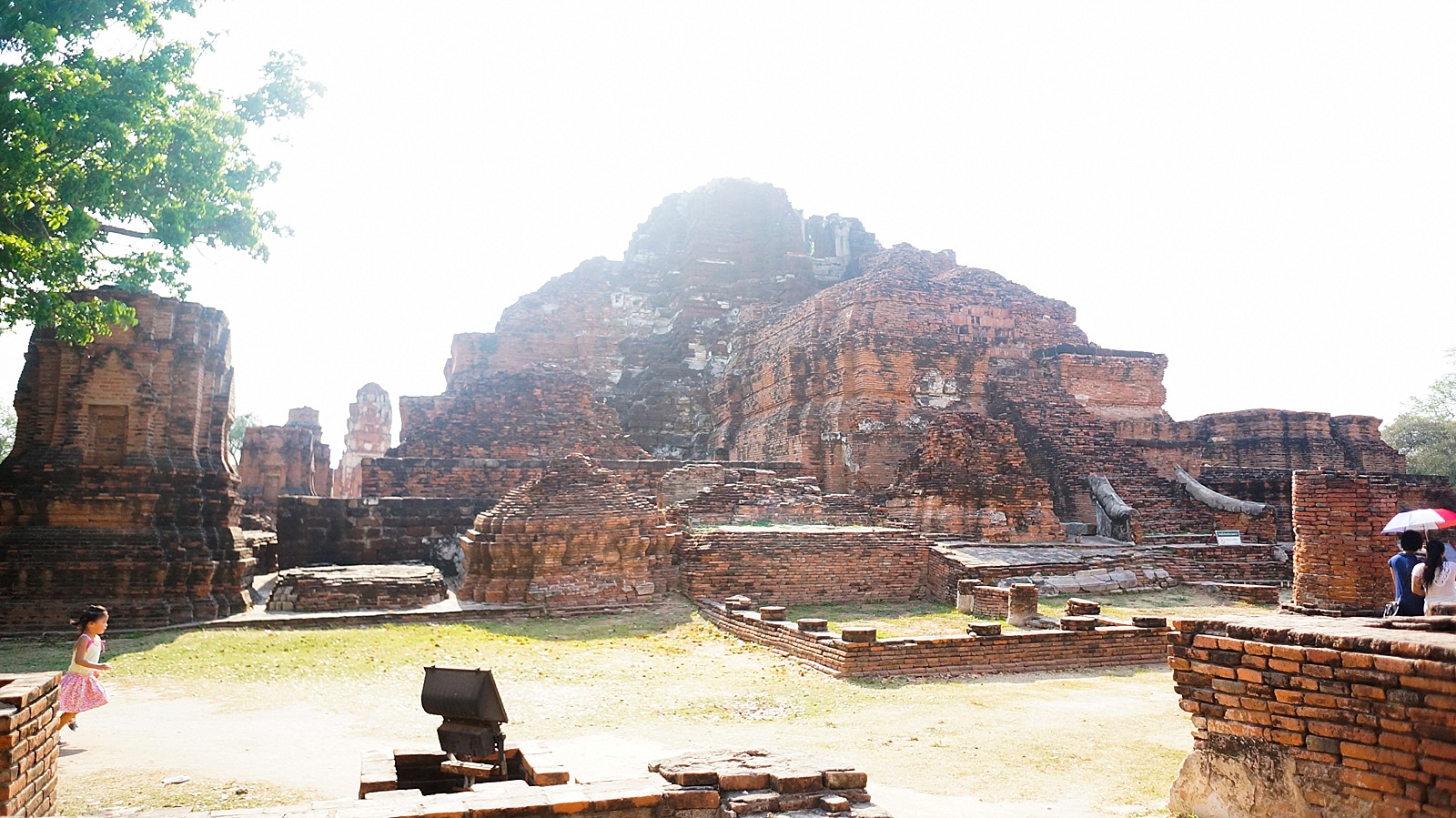 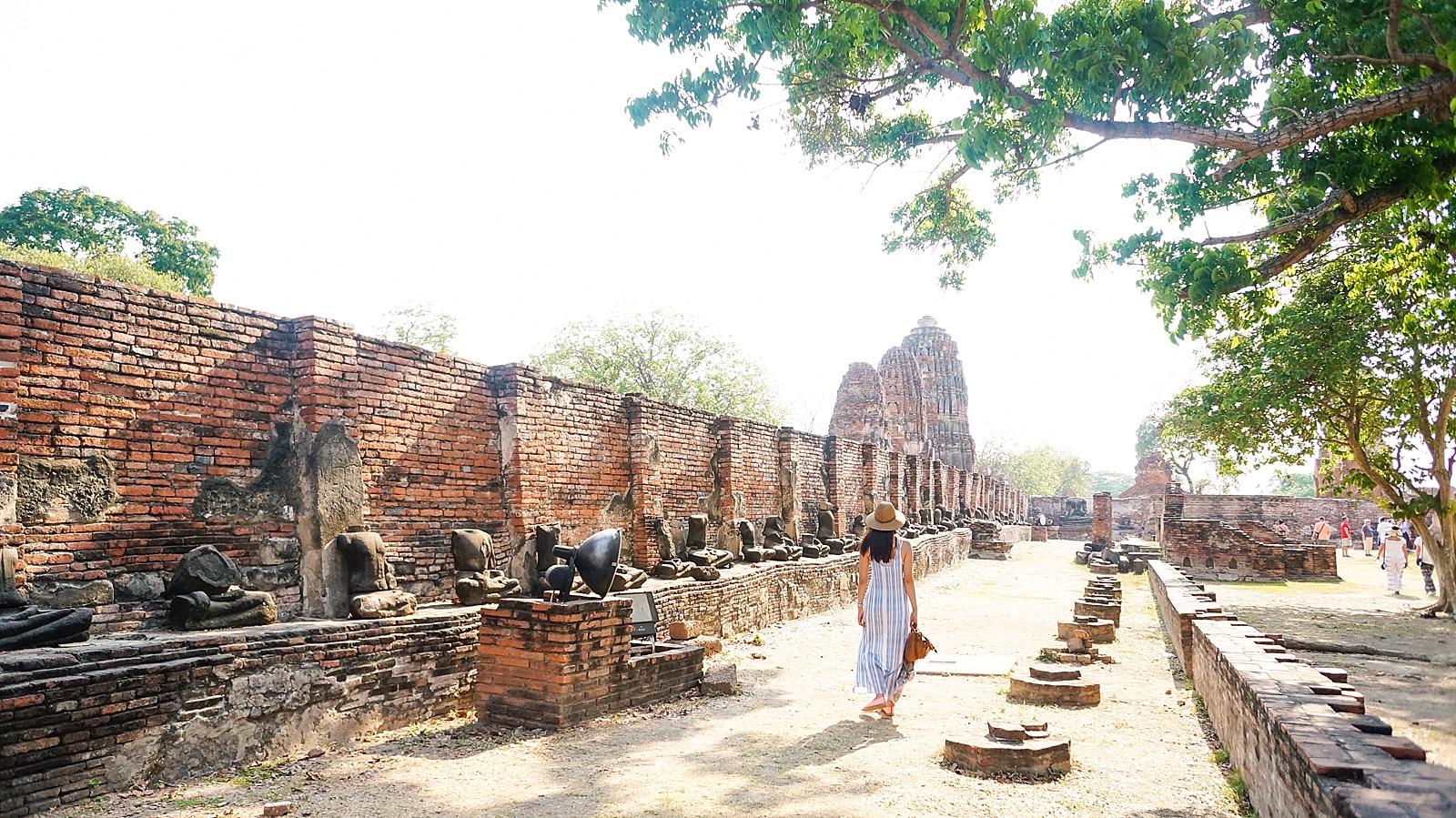 From the beaches of Phi Phi to temples and the market, there’s so much to do in Thailand. Overall I would suggest it, but I would advise not going in April since it’s the hottest month of the year and avoid wet season (which is rainy and miserable I hear).

The Thai are so kind, so welcoming towards tourists. Tourism is their second highest income for Thailand. China is the number one country who visits, with America coming in second – so keep in mind that you will see a lot of Chinese tourists and Thailand is Asia – it may be crowded (but if you’re an avid traveler you’ll probably be flexible and know cultures differ and to be easy going). The exchange rate is out of this world great for a US traveler, and to get an idea of our trip cost, we booked it through Groupon with Affordable Asia tours for $1200 out of LAX, flights and 10 days, hotel and breakfast included. Our Phi Phi island trip was a detour, well worth the extra $500 extra in expense. And spending money, I usually bring $700-$1000 to spend on miscellaneous, meals, taxis, excursions and shopping. This trip I spent about $600 but that’s extreme since most meals were $1.25 to $15.

I would especially encourage Thailand for the younger, energetic crowd, and for those who love Thai food, especially! Just be up for an adventure and embrace the culture. Be willing to get uncomfortable, try the unique food, eat the street food – it’s fine! Drink the Thai tea (or in my case Thai coffee) and enjoy your experience! I hope I encouraged you to put Thailand on your adventure list!

Photographs taken with a Sony NEX-5R and Canon G7 X.

There are no comments on Historic Ruins in Ayutthaya.