Now I know not all of you are 49er fans but I thought this would be a fun post for you to experience a little behind the scenes glimpse that I recently experienced.  This post is dedicated to my dad. 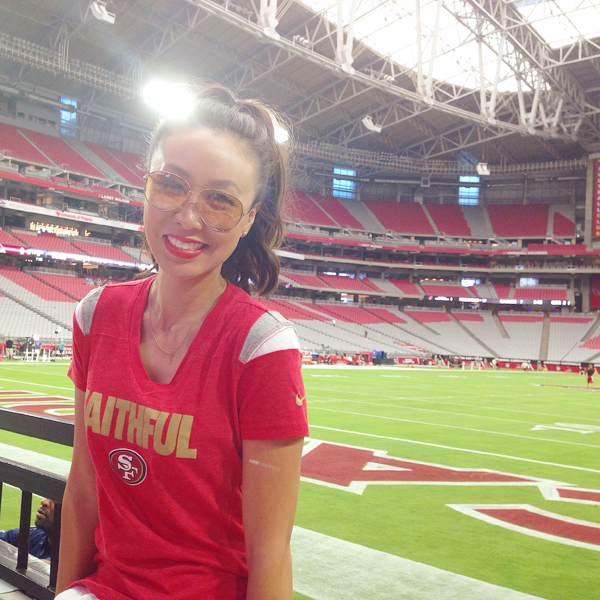 My love story with the 49ers is basically that I came out of the womb in a 49er cheerleader outfit.

My dad was born in SF, my grandparents immigrated and lived there, and summer camps used to be in Roseville (before they moved to Stockton) which was the town next door.  When you are from Nor Cal, you cheer for the Niners.  We have autographs, I have a photo with Terrell Owens, and we have a Niner wall upstairs in my brother’s old bedroom.  My dad is a die hard fan and before a game would start he would say, “Ask homework questions now because the game is starting and you cannot ask me for four hours.”  We were not allowed to talk to dad during a Niner game.  If we came downstairs and the game was turned off prematurely, we knew what that meant – and it was to remain unmentioned. 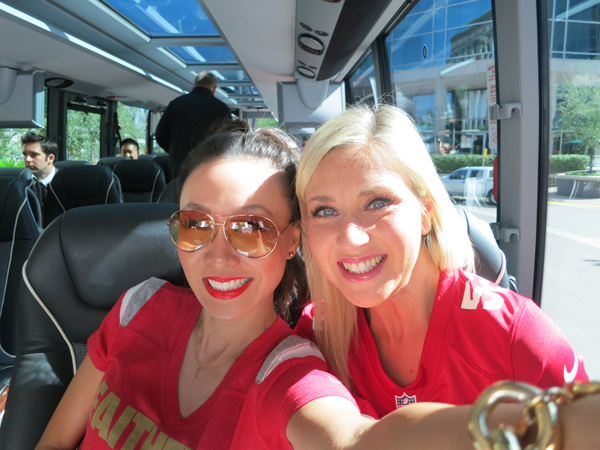 Today, my best friend from college Jackie, works for them.  Here we are on one of the team buses from the Ritz Carlton heading to the Arizona Cardinals Stadium.

They presented a unique opportunity for their employees-  if they attended a certain number of educational classes about the 49er organization which were optional, they would be sent to an away game and able to enjoy it (when there is a game day, all 49er employees work the game).  A handful were able to make time in their schedule (many were busy with the preparation of the new stadium), and one wasn’t able to make it so I was lucky enough to be invited to attend.  I’ve never been to an NFL game before – I’ve been to every other type of professional sporting event (even hockey, what?) but not NFL because there’s no team I’d want to see other than the niners which was near impossible given I now live in Phoenix.

But bestie was in town, the opportunity was a blessing, and here’s how the day went. 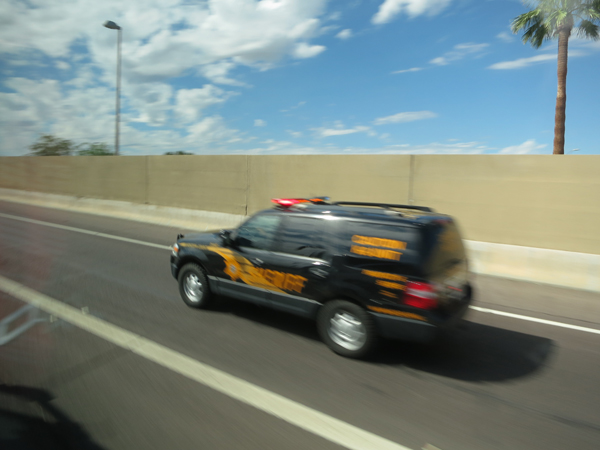 It starts with several buses on their way to the stadium, escorted by sheriffs.  The sheriff cars close down the streets, drive around us with their sirens on because there is no time to be late for a game.  You get a lot of stares of people looking like what the heck is going on?  And some fans, well, they know.  So you get 49er fans driving along side showing off their hats and all excited about the bus arrival.

Arriving at the Stadium 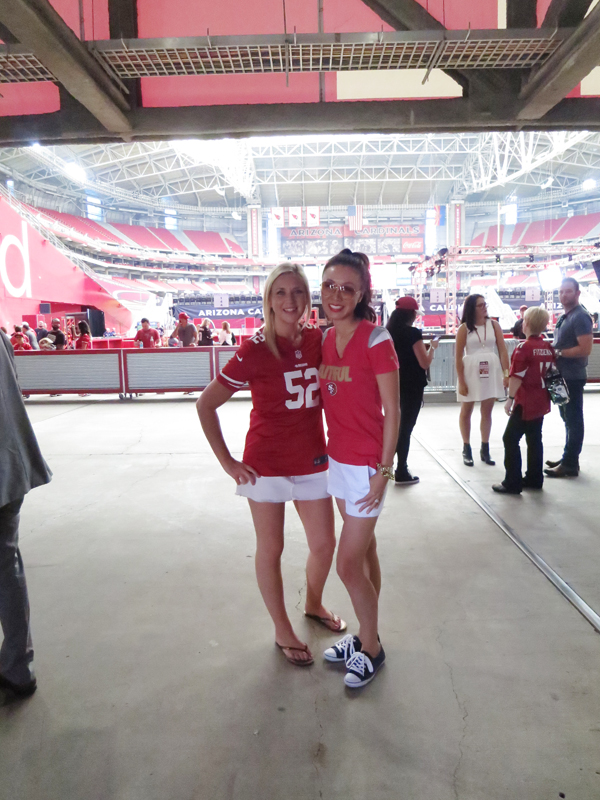 Here we are at the Arizona stadium.

Kids, we have been doing selfies before you were even in elementary school and before they were even called selfies. 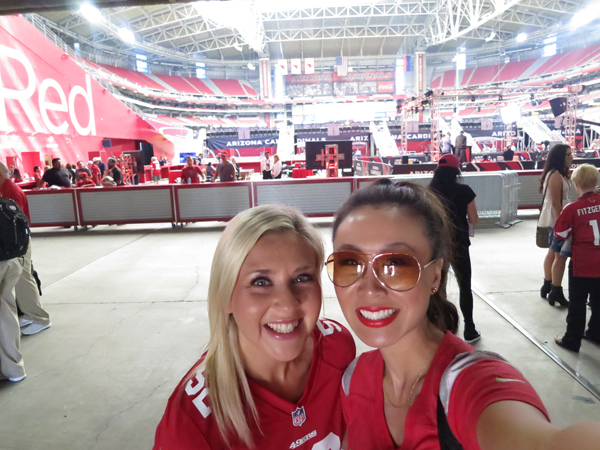 We arrived at the Cardinals Stadium around 10:30 a.m. and had quite a while until the game would start – 1 p.m.  So we sat and took a ton of photos and watched players work out and stretch.

Waiting for the game to start 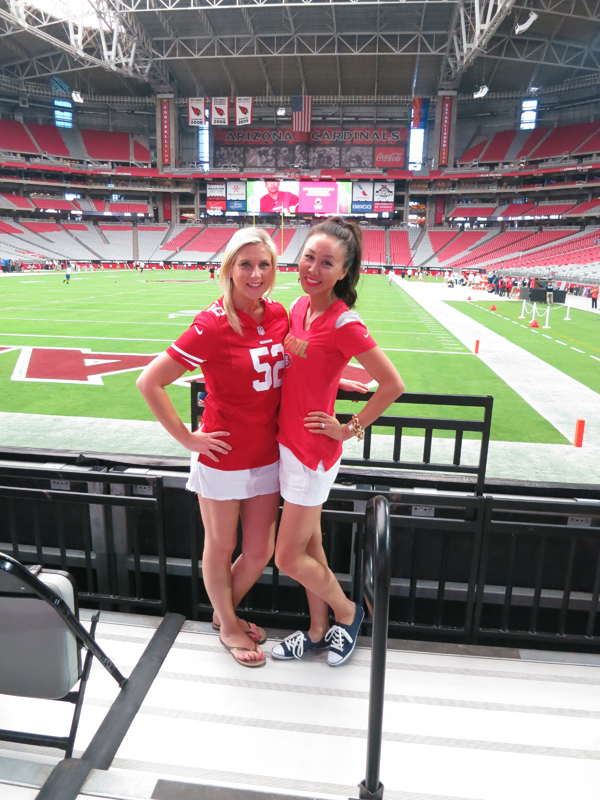 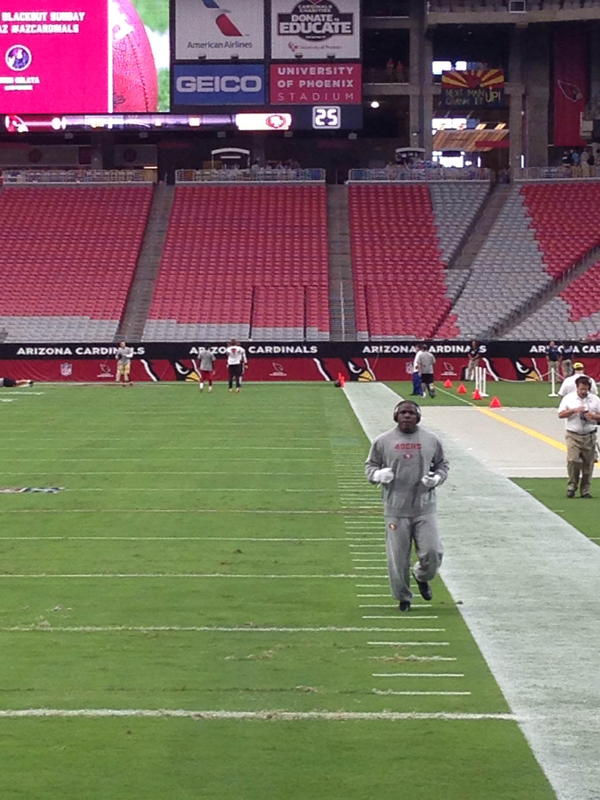 Look what my friends are taking photos of … those aren’t even Niners! 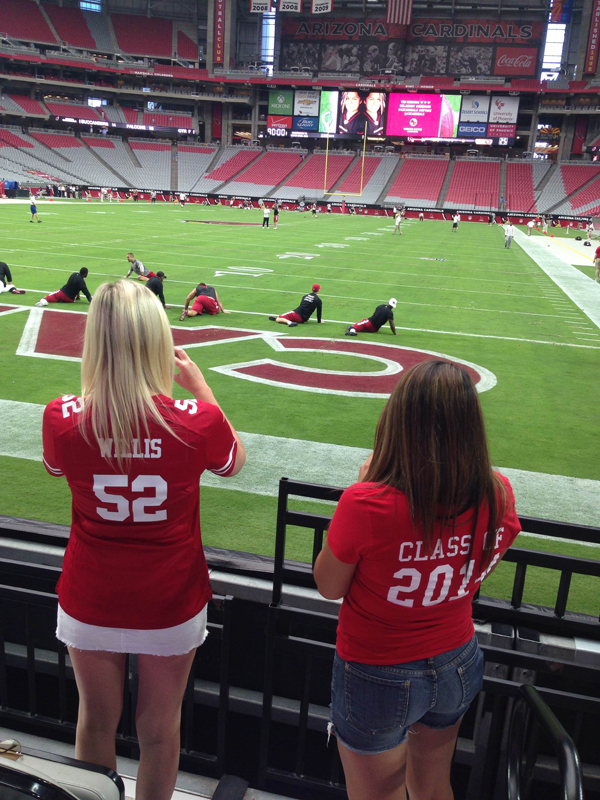 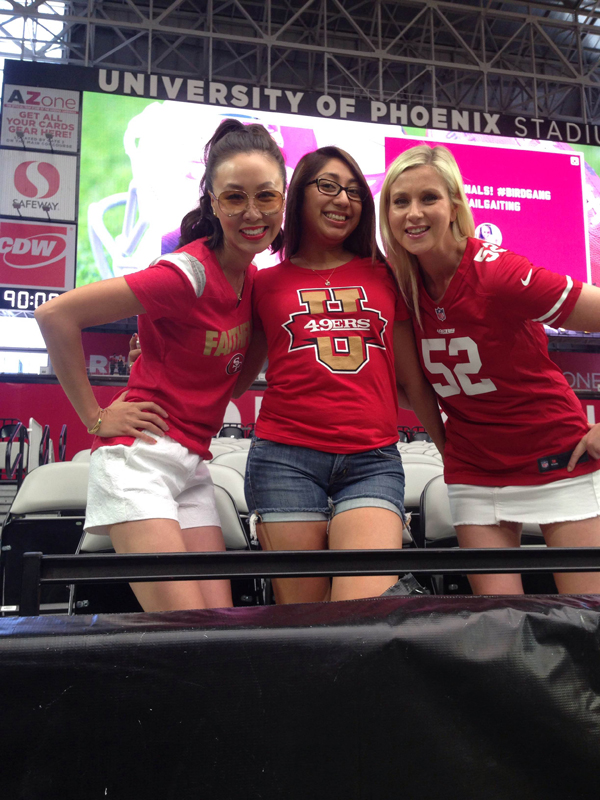 Even though I have no ties to Arizona other than going to college and living here, I cannot get myself to be a fan when there’s just no tie.  But the Cardinals Stadium is very cool – the grass rolls out and they did all this crazy fancy stuff to it since the team upgraded from their games at ASU’s football stadium.   I also know it’s not officially called the Cardinals Stadium but this is not a sponsored post so I don’t care. *wink* 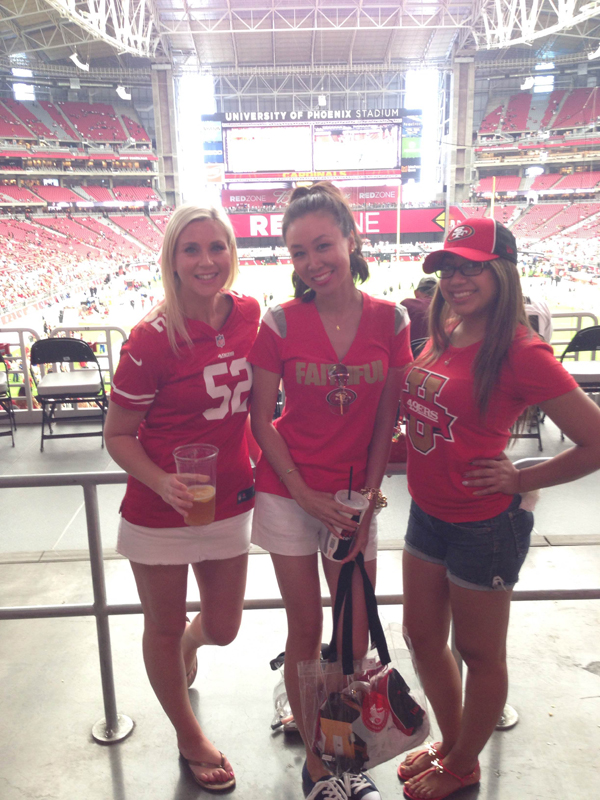 Jackie bought me all this 49er gear including the shirt I’m wearing.  Faithful is truth – been a fan even when the team wasn’t winning for years (crying emoji face).

Found our seats.  Any guesses how much these seats cost?  $100.  So mom and dad, I hope you enjoy your club seats/non birds eye view at the Levi’s Stadium I managed to hook up for you (thanks Belem!) next month.  Dad, you should get a jersey or polo at the team store at the stadium.

Can you see whose family I’m sitting behind? 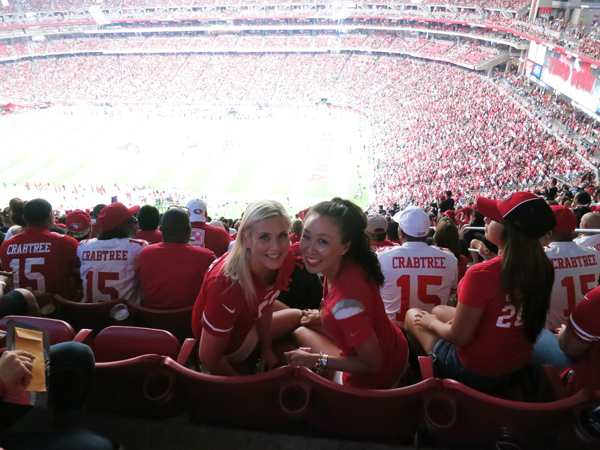 This Red Zone area is where I took a lot of those selfies I posted earlier – also that table area behind is where we went after the game.  It’s where the family of the opposing team hang out post game and say hello to their family.  Sure, I feel like I’m part of the family. 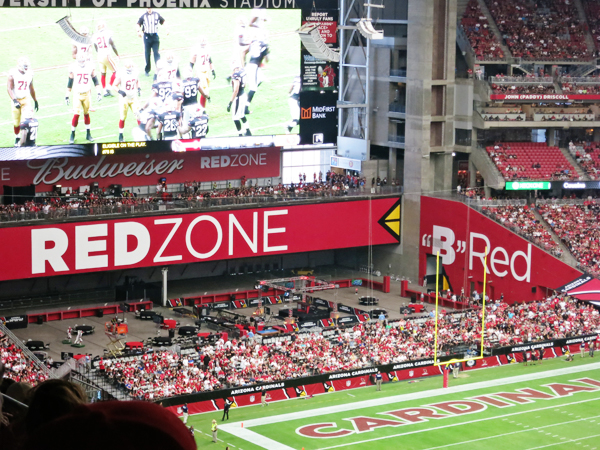 Sadly, we didn’t win.  I mean a win would have of course been better, but I still enjoyed the game and had lots of cheering for my team as they did do fairly well until the second half – yikes.  I blame a lot on the refs too – some were whack calls.  To cheer for my favorite team in the entire world in person is just the best. 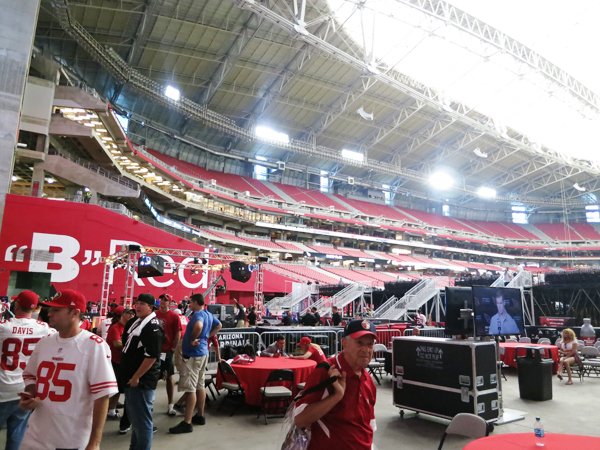 Live interviews take place here, 49er fans and family hang out (with a ticket that says you can).  I don’t think the players have much time before they hop on the bus.  TSA comes and they go through a pre-check screening so they can hop on their private plane back.

Then when it’s time, you load into one of the 6 buses headed to the airport.  Traffic? No problem, sheriffs have it handled.

I also want to mention that I saw so many “birds” flipped at us.  And while I know people who do that do not read my blog, sheesh people – one guy did an “L” sign and that’s just rude.  I think that says more about the person doing it than the person it is intended for.  I could go on and on about how many badly behaved people I saw from Cardinals fans, but I’m sure every team has their bad boys – and girls!  It just made me think players have a lot to deal with and fans are doing things for fun, but everyone has feelings. 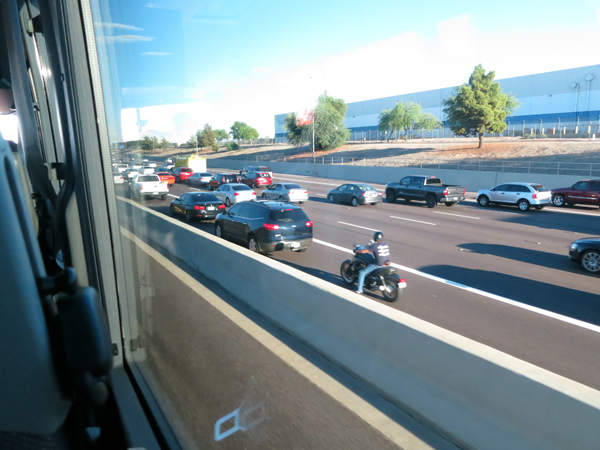 It was a great time, what a fantastic memory – this one goes down in the books!  Hope you all had a great weekend and your team won! 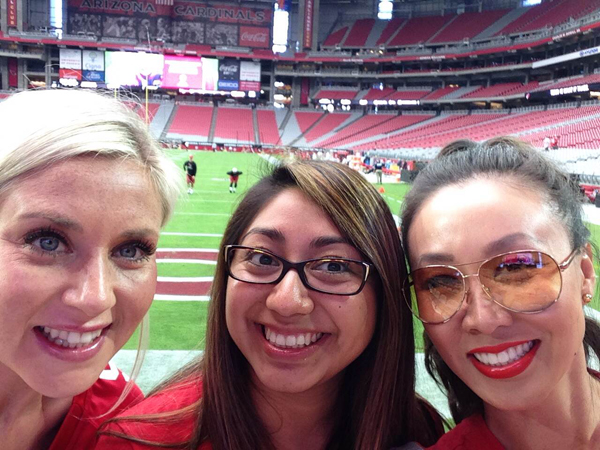 There are 2 comments on A Faithful Fan.