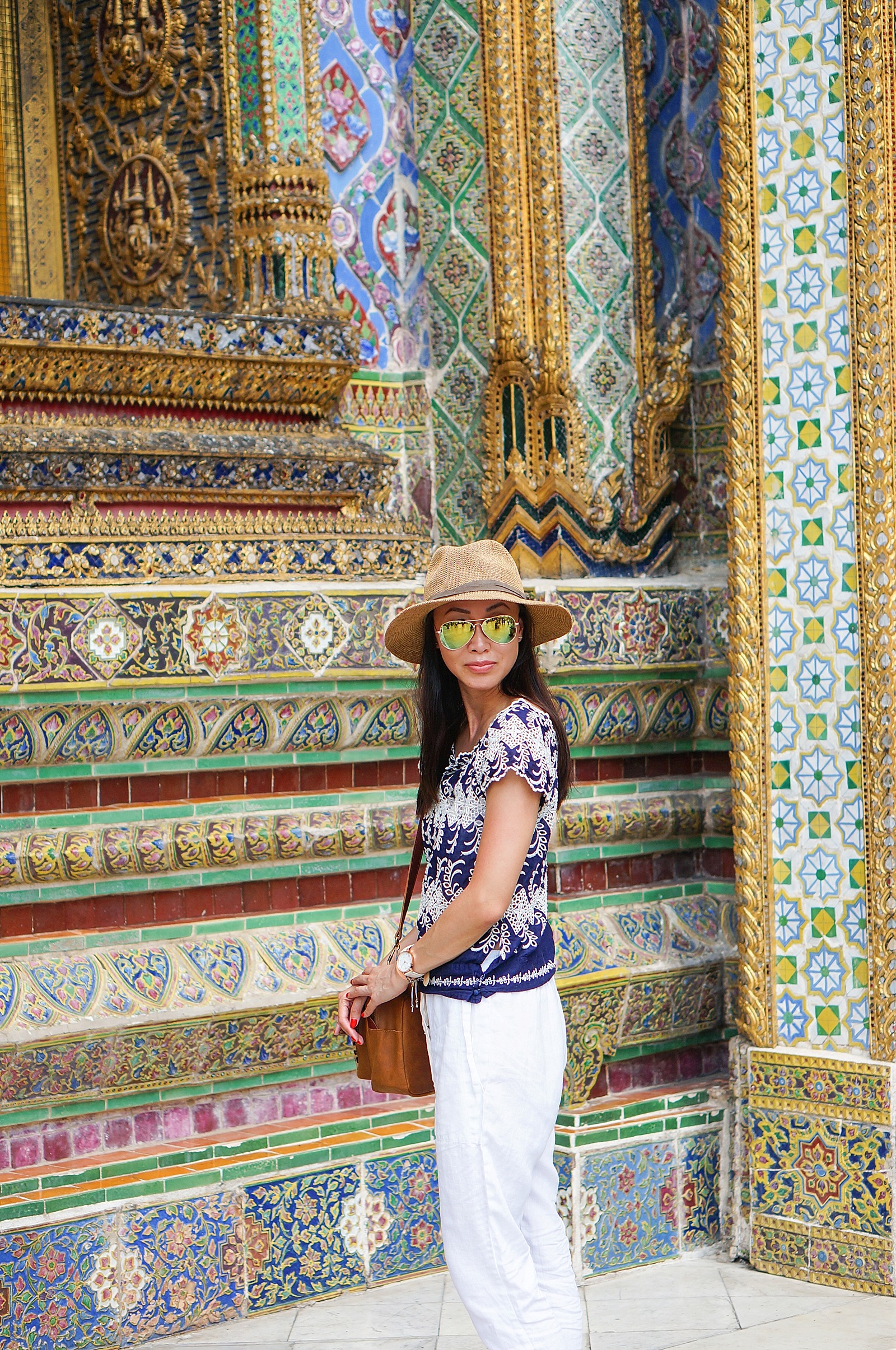 This is the second post in a series of 5 blog posts dedicated to Thailand.

The first two days in Bangkok we visited Buddhist temples. I enjoy seeing the ornate temples and the overall history – but man was it hot! First, you must cover up if you’re in the temple – so bring a scarf. April is the hottest month in the year so being covered up nearly killed me. I wouldn’t mind the heat if I could’ve worn less, but I understand we need to be respectful!

But I also can’t wait to show you my favorite part – the floating market! 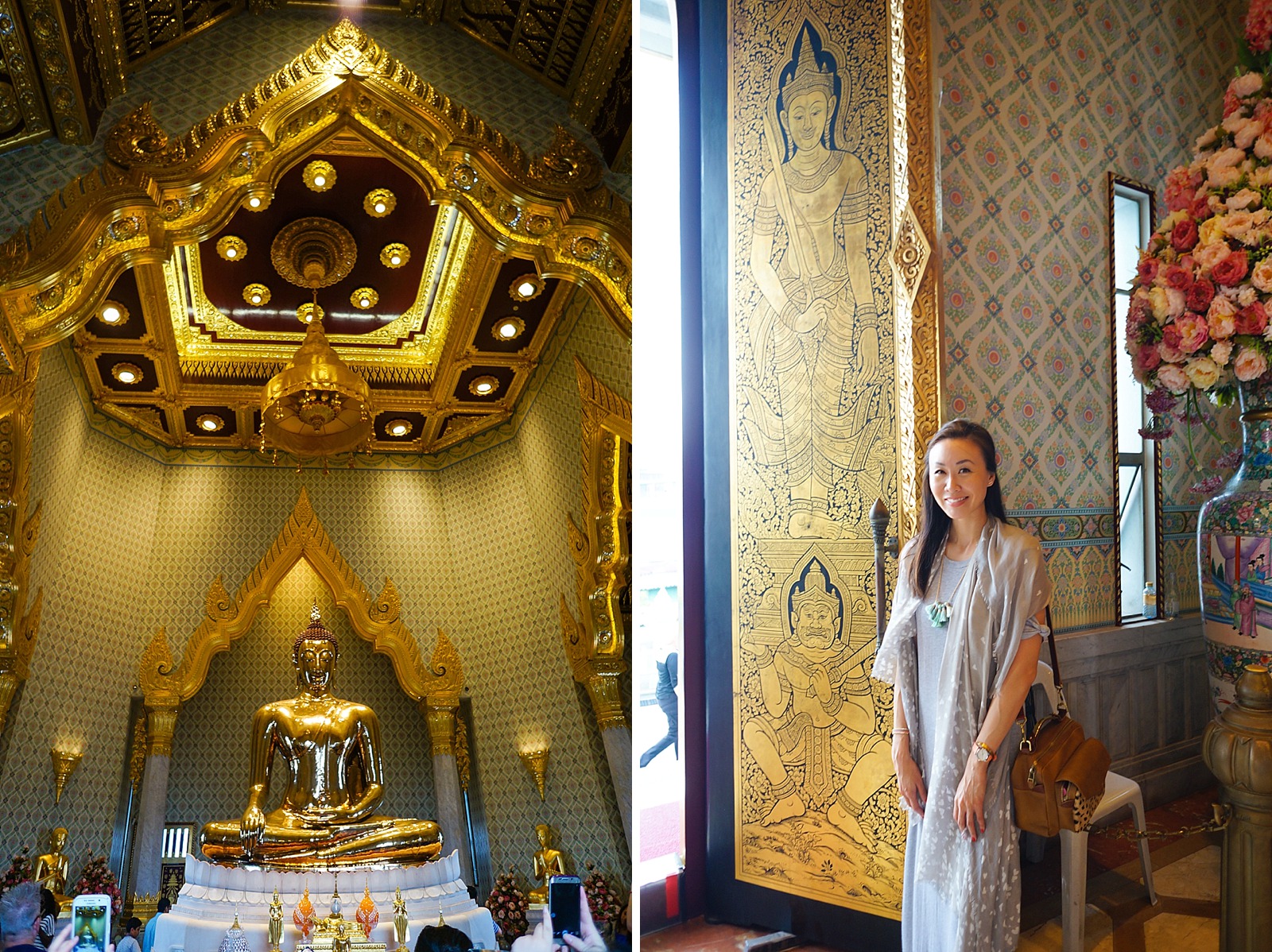 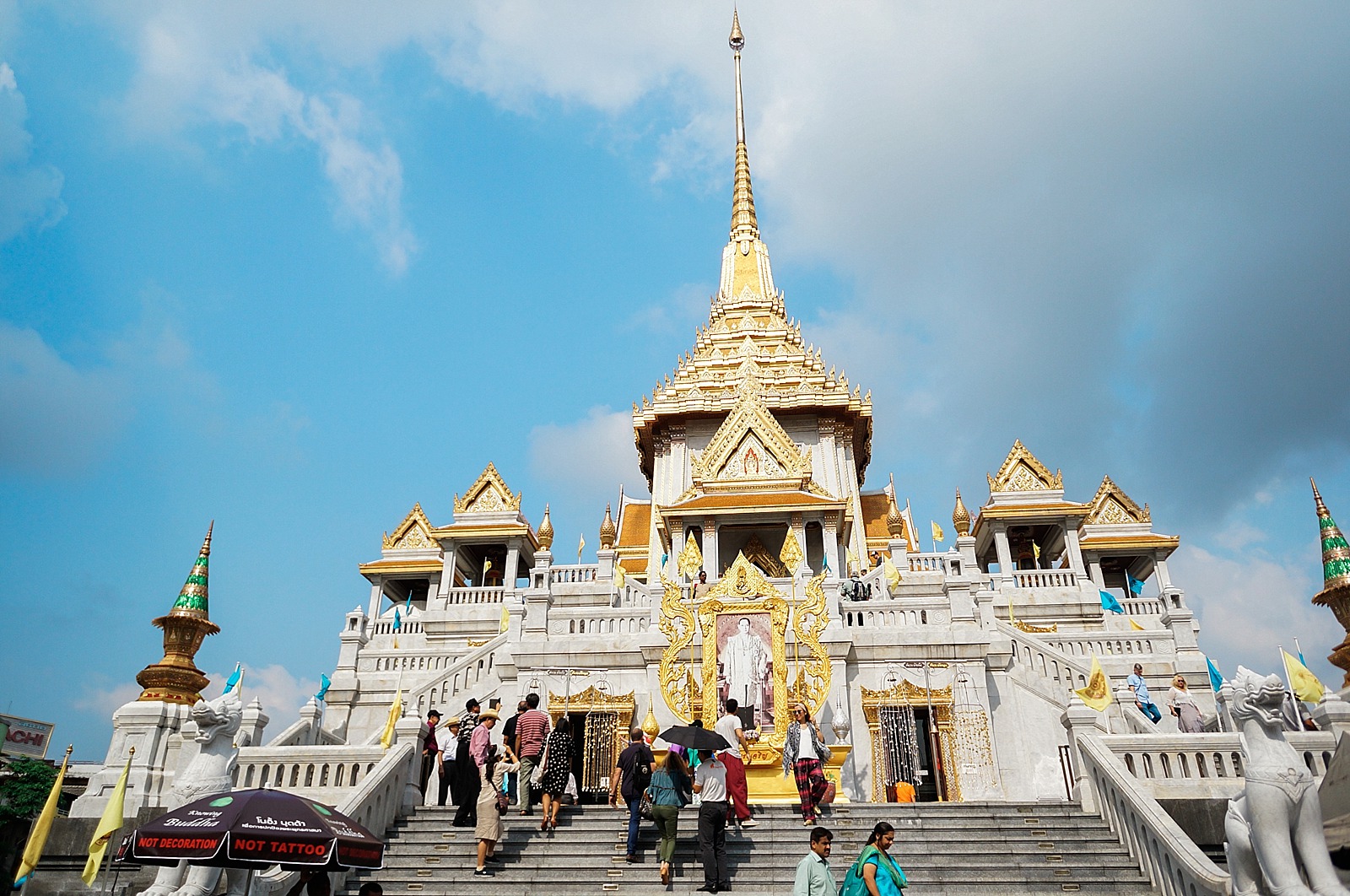 I am a legit nerd. When I read it was a reclining Buddha, I thought he was reclining like you would on a reclining chair, like in a La-Z-Boy.  When I saw him I was like, oh, he’s like sunbathing! Hee hee.

The wallpaper was gorgeous – and when you enter temples, you cannot step on the gold divider on the floor when you enter the room. It’s usually a gold step – you step over it, do not put your feet on it. 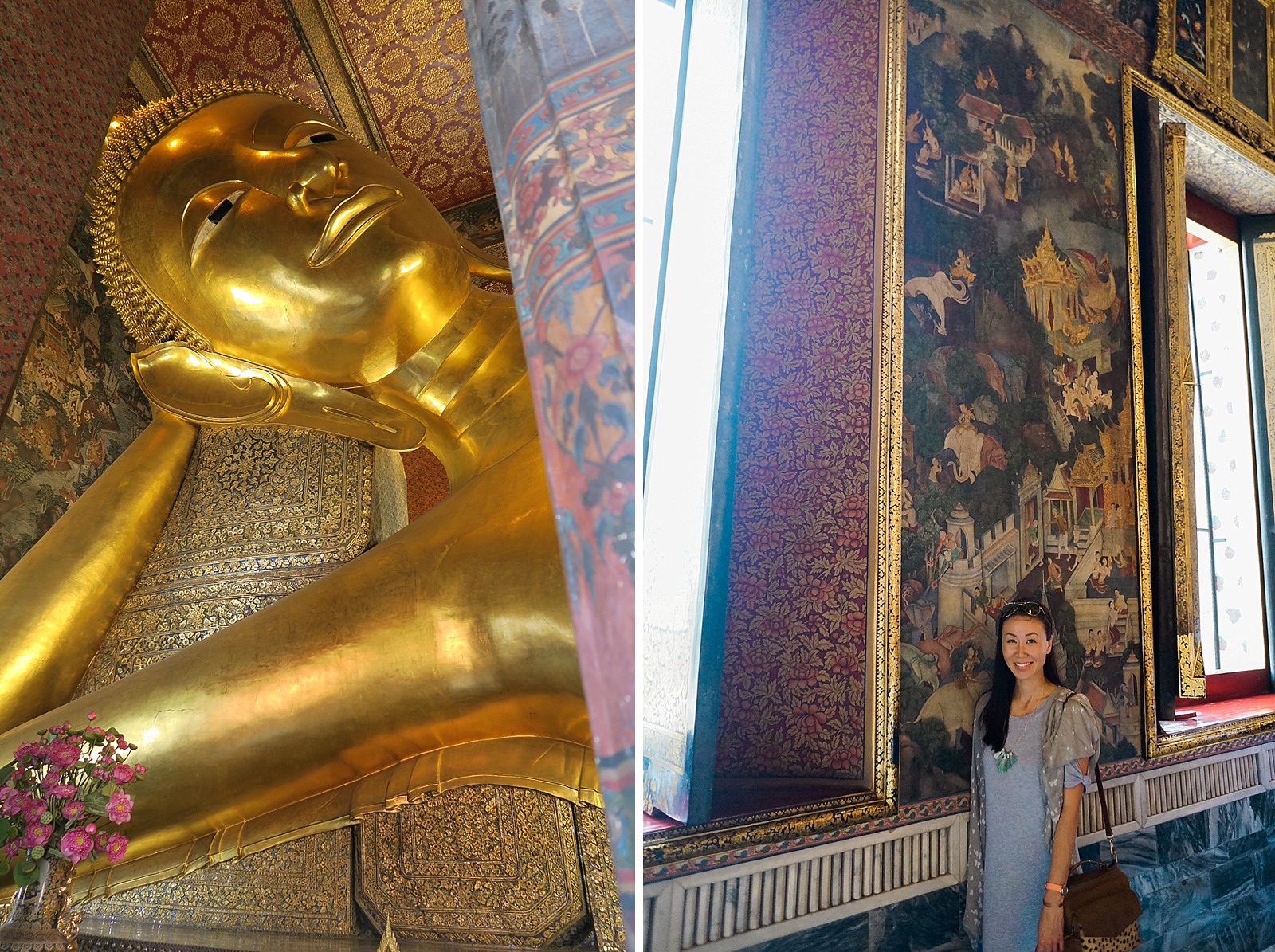 Temple of the Emerald Buddha

This was a very crowded spot but it was stunning – as a gold lover it was pure eye candy for me. A whole lot of tile and shiny gold, I thought about my high school ceramics class and thought that if I were ever to have helped assemble this thing, my building was surely lose all of its ornaments. 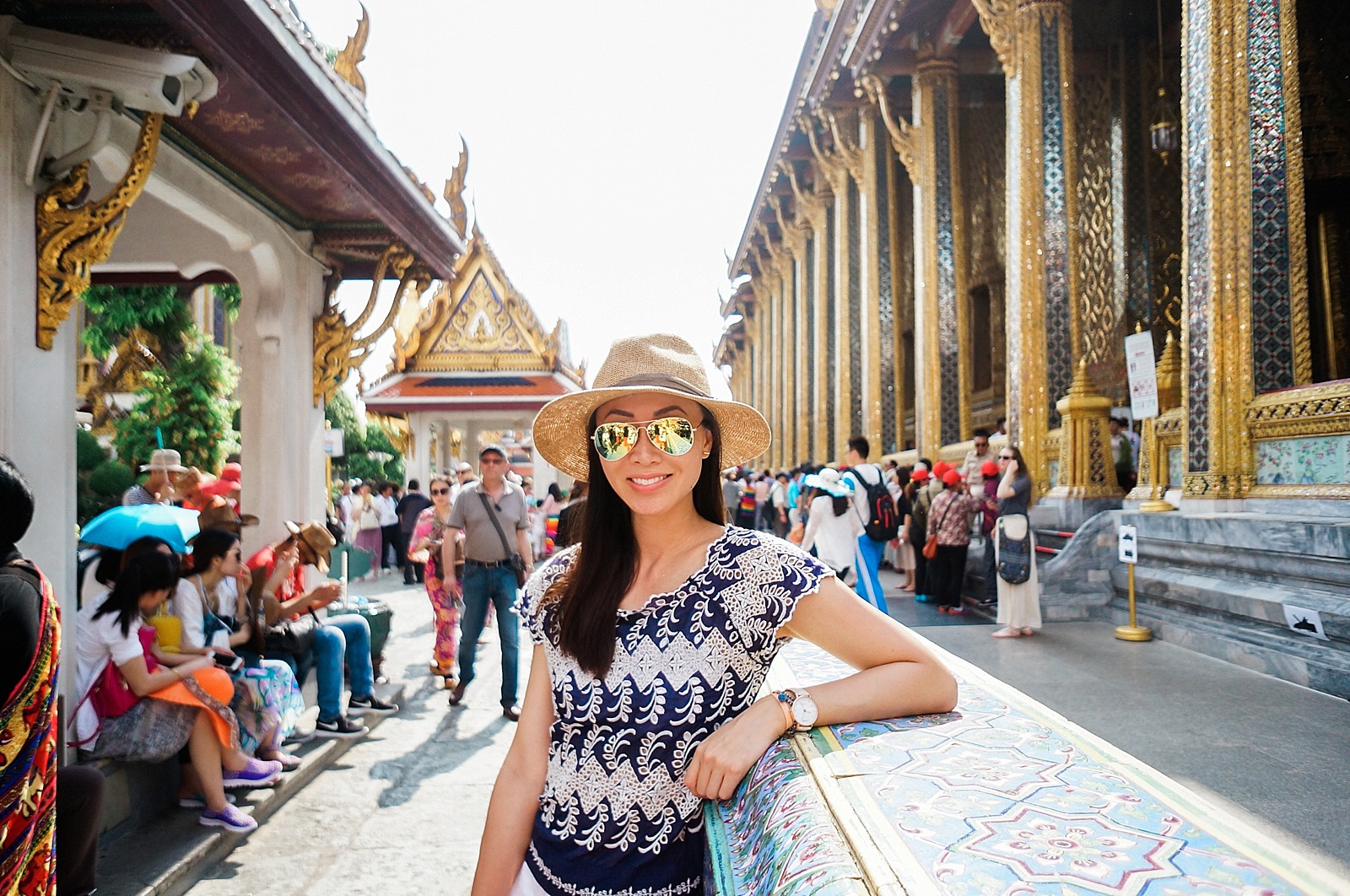 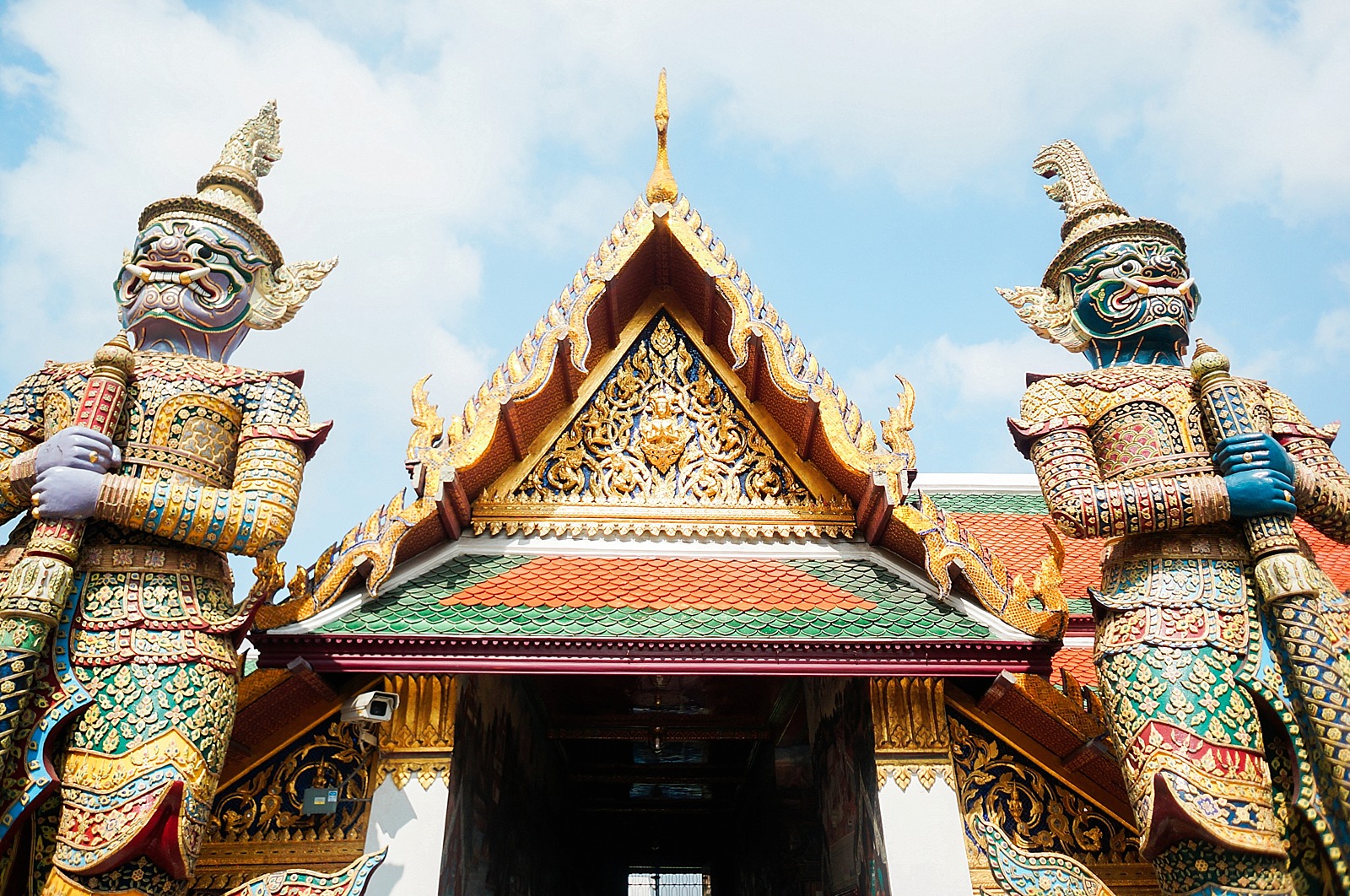 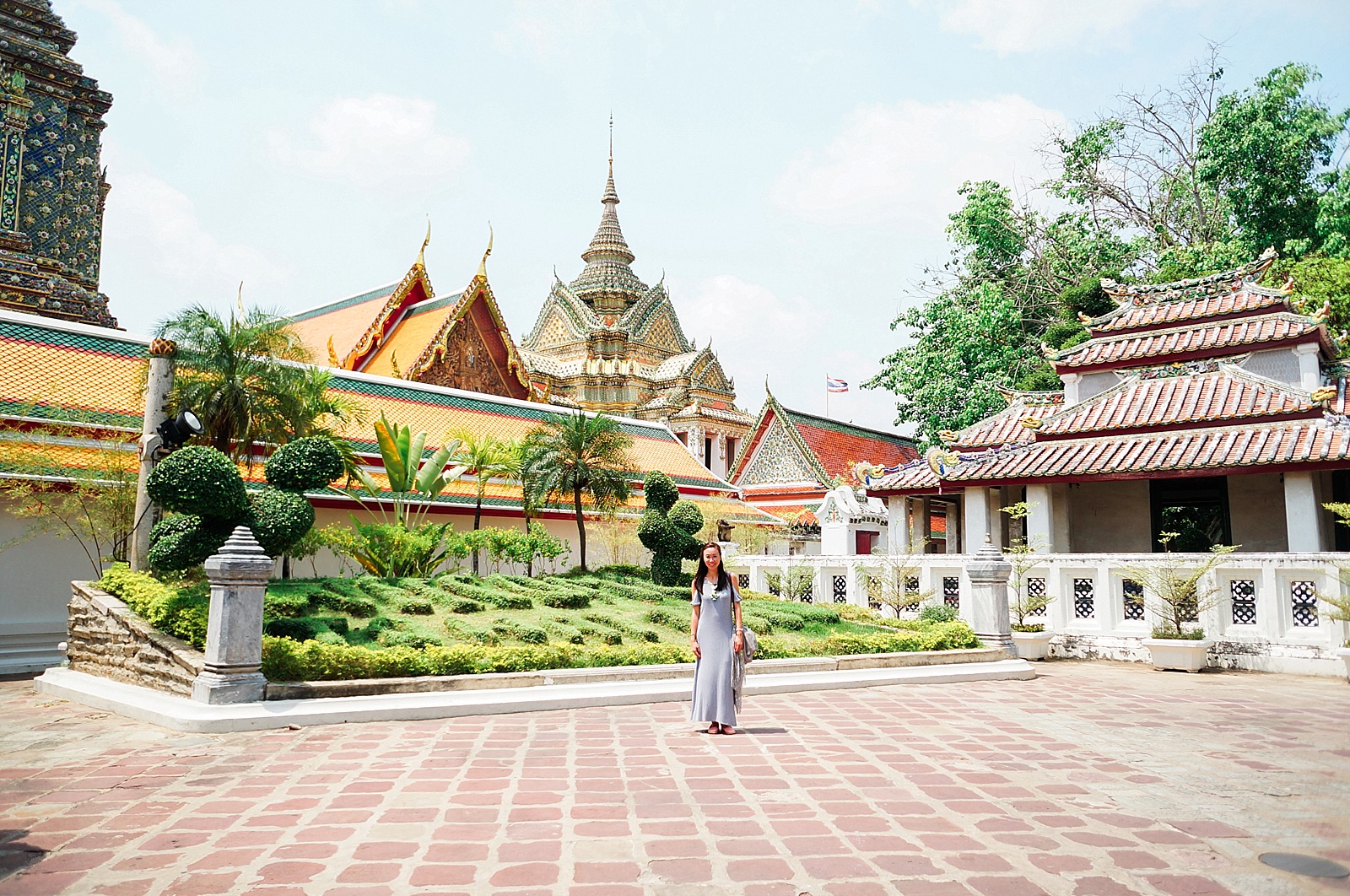 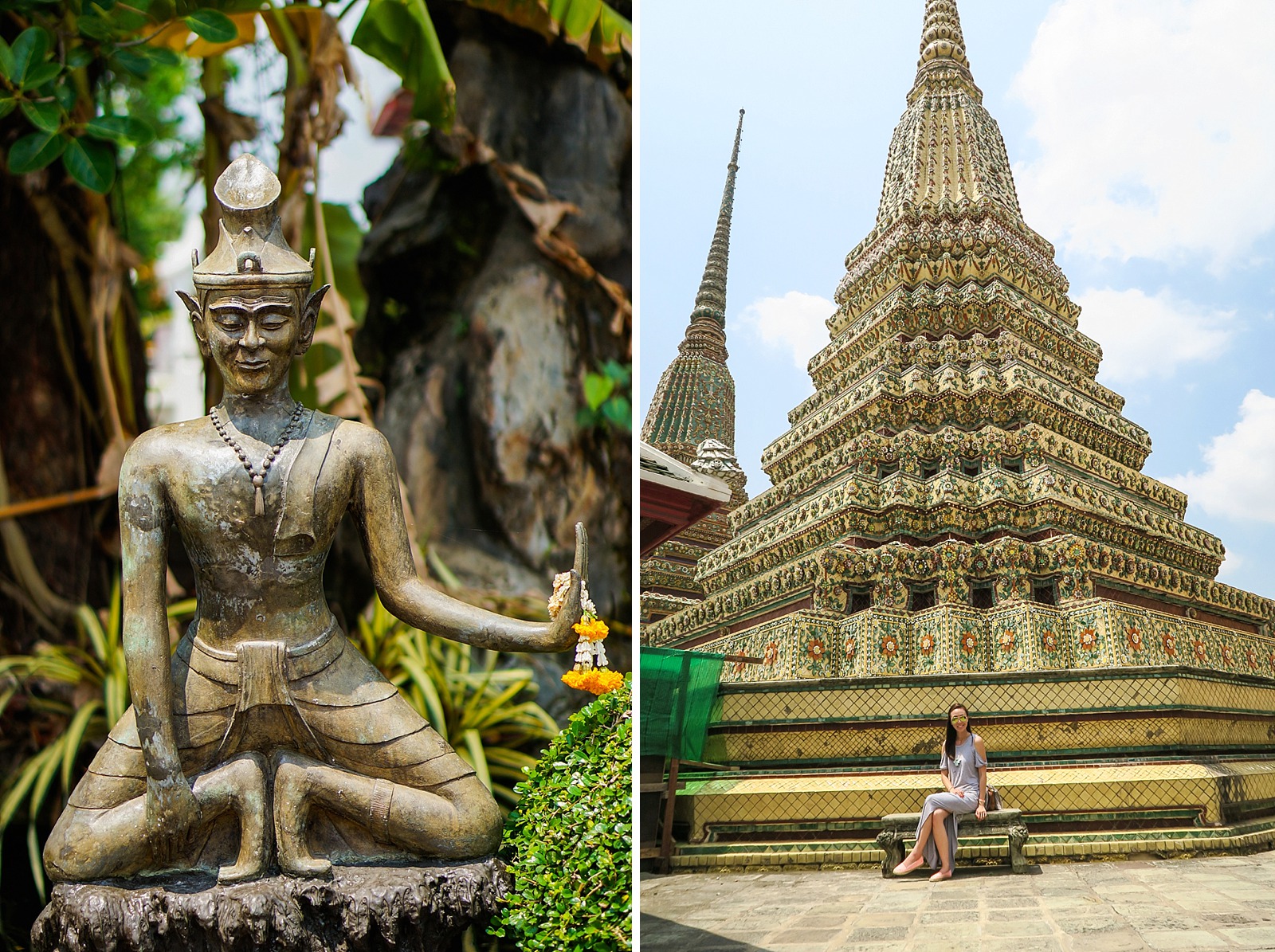 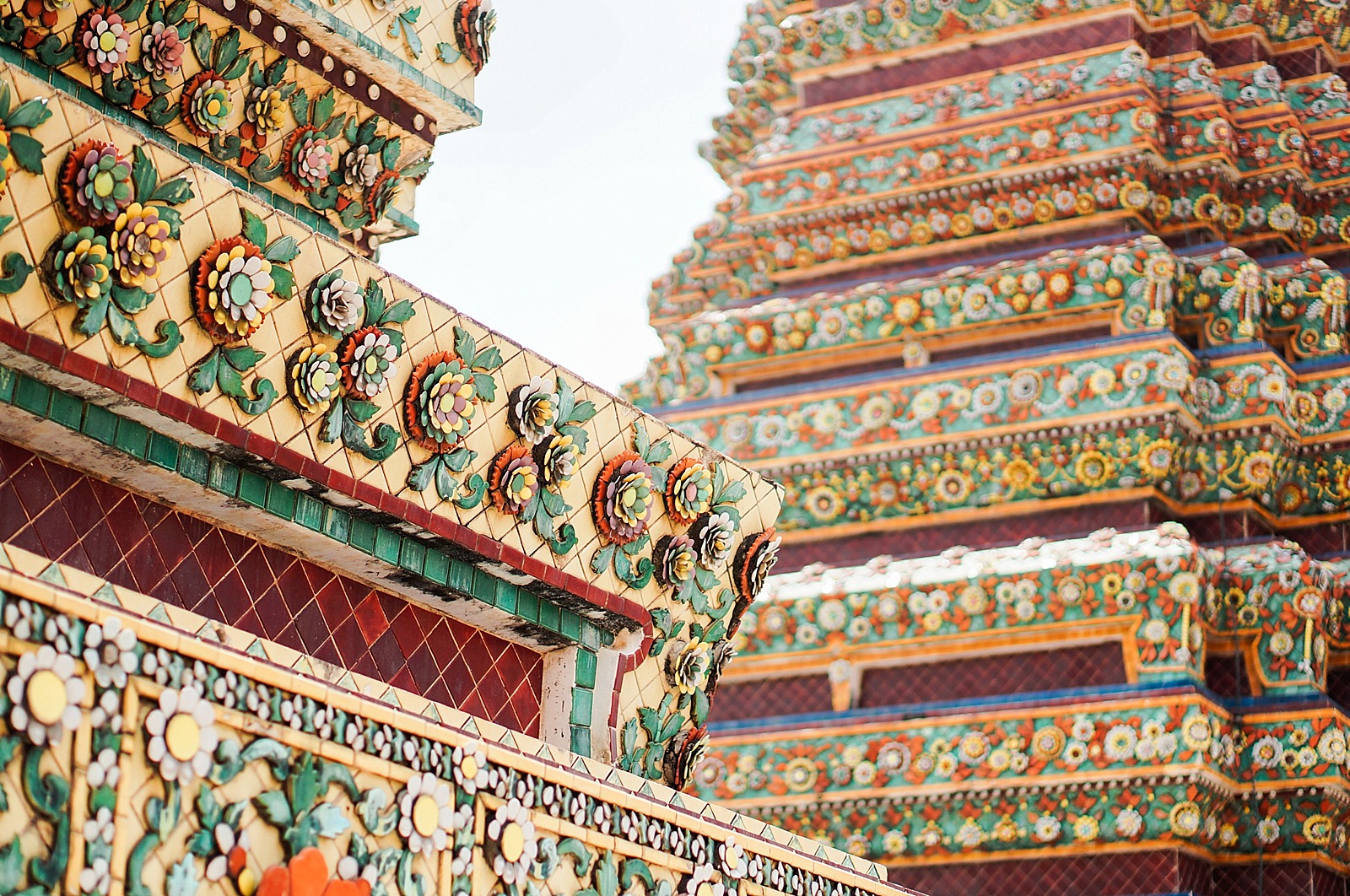 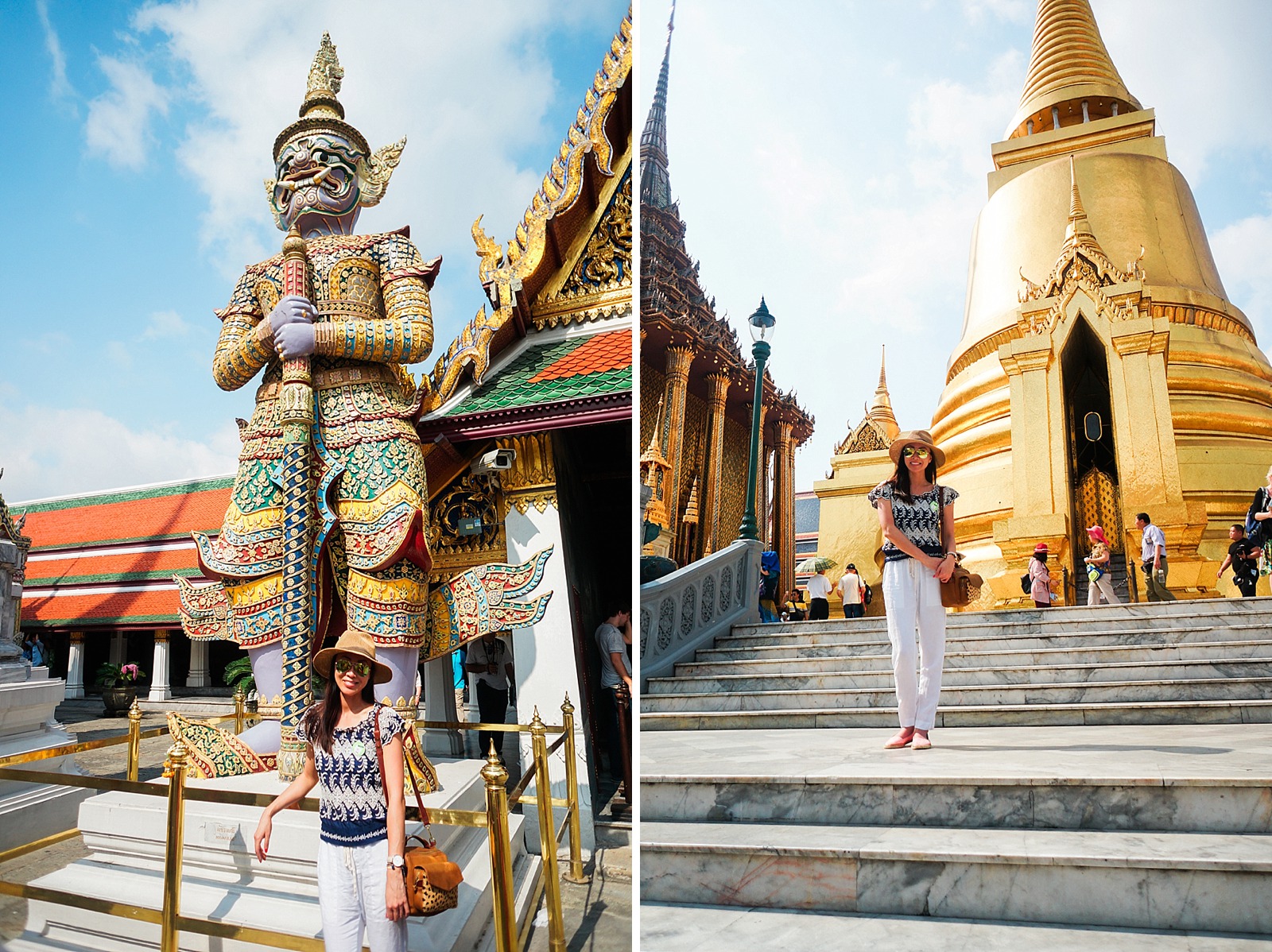 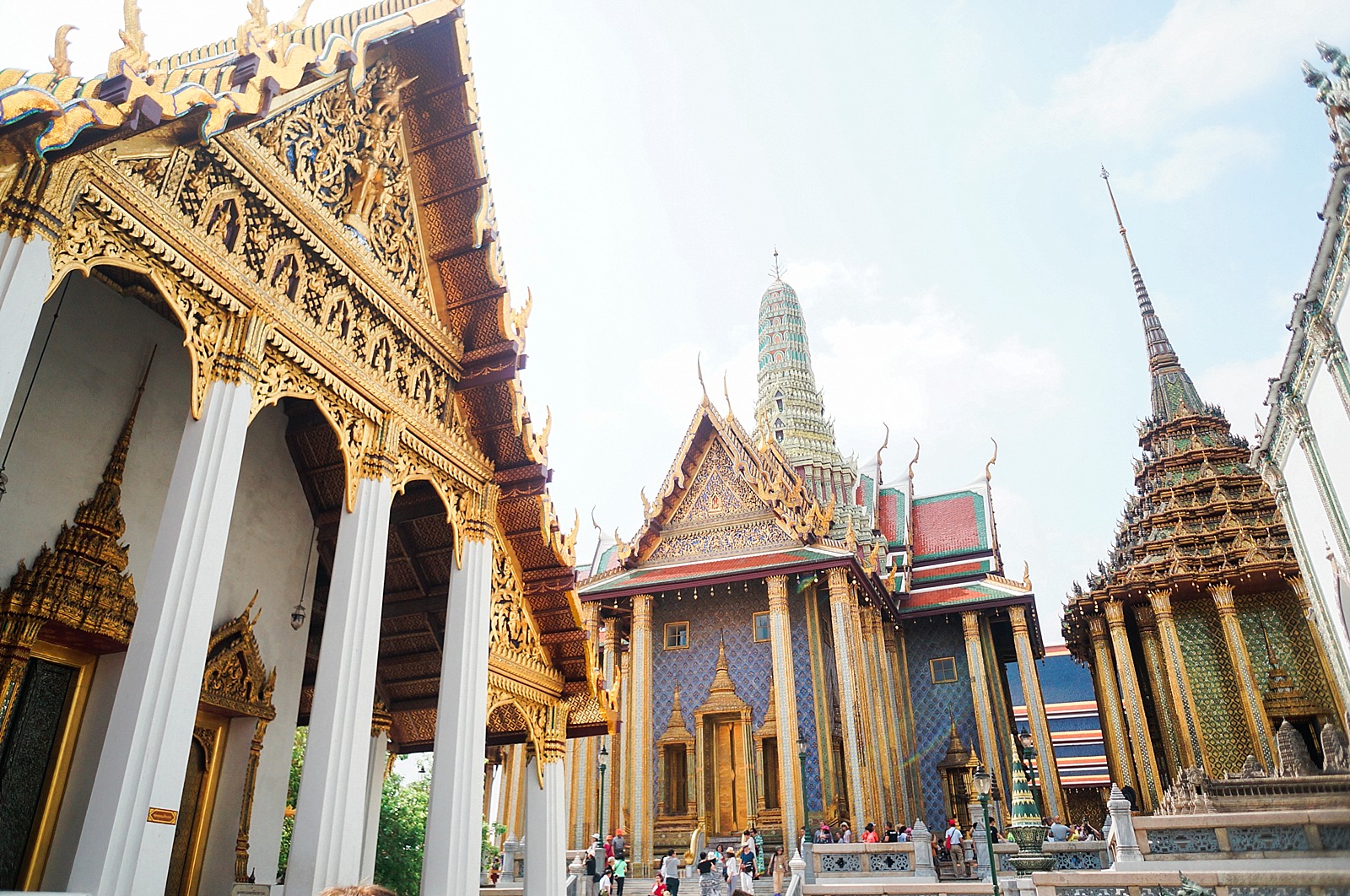 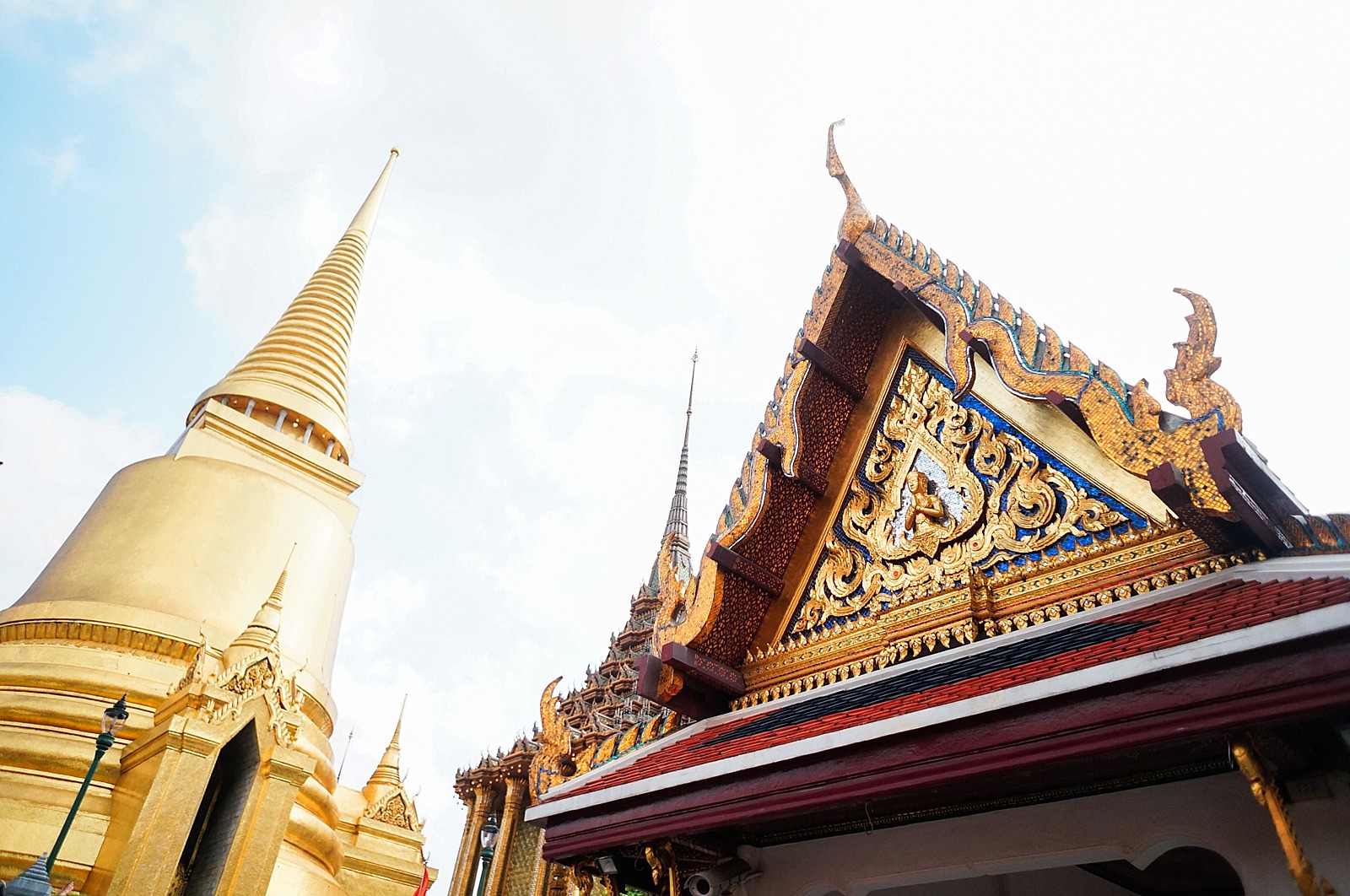 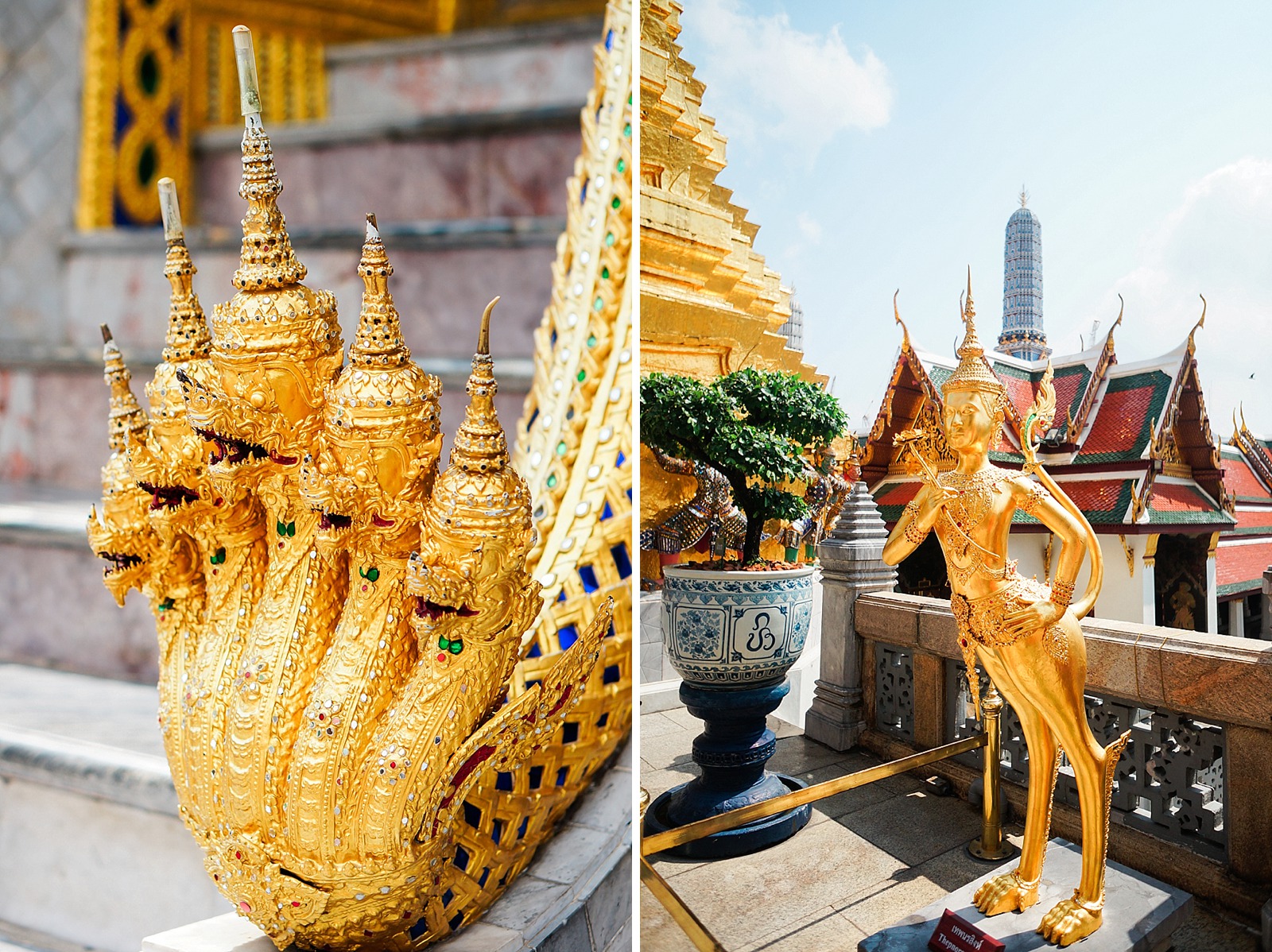 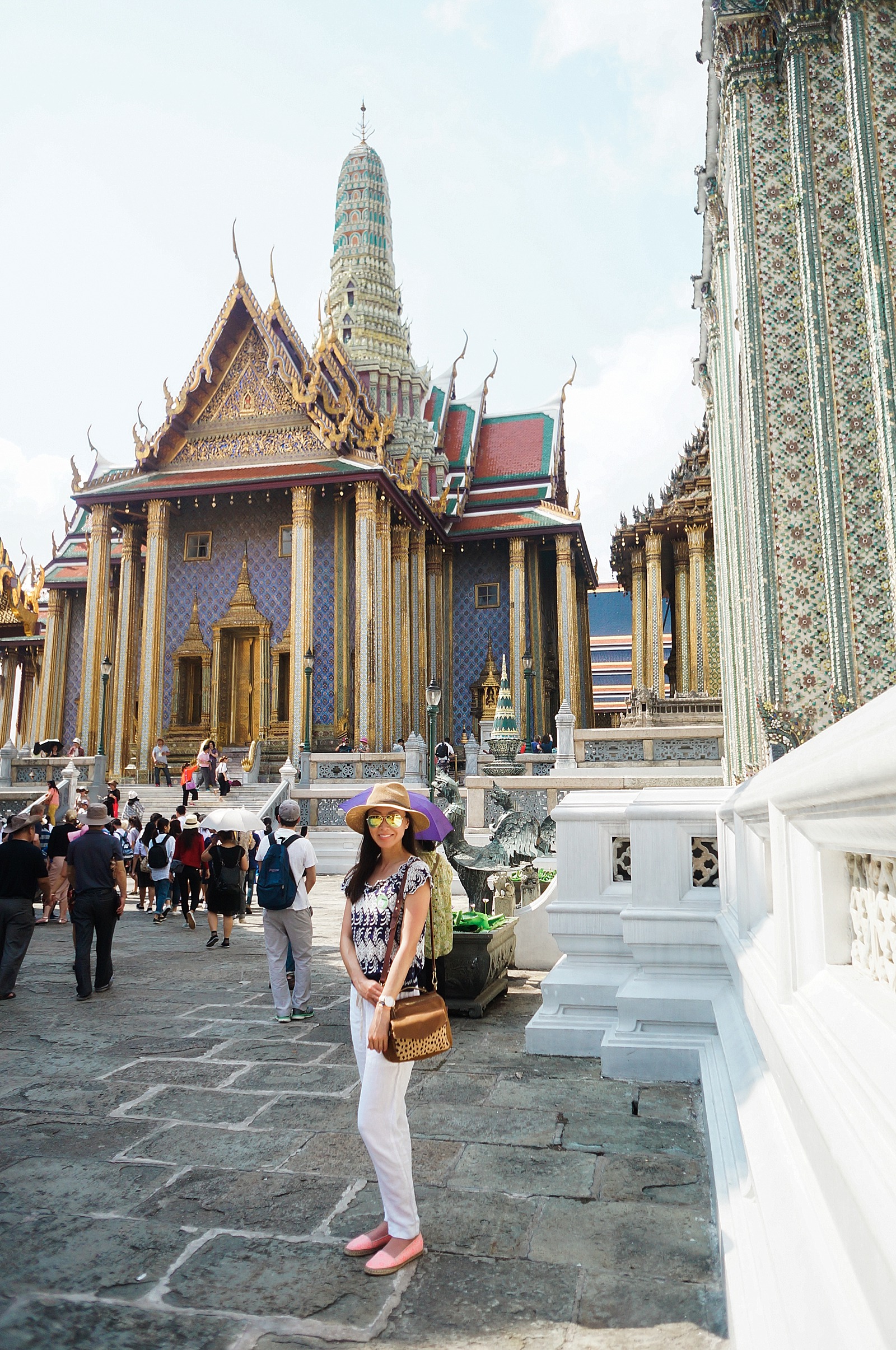 Incase you didn’t notice, I was sweating so bad, it was such a hot day and that temple was the most crowded that we had been in. I was quite irritable until I discovered – blueberry smoothies! I ordered them over anything else that was available, including Thai tea. I must confess I didn’t order Thai tea once, instead I went for the blueberry smoothies and the Thai iced coffee which was delicious!

Now look at that smile, before it was a sweaty frown! We then hopped on a river boat cruise to see more of Bangkok. 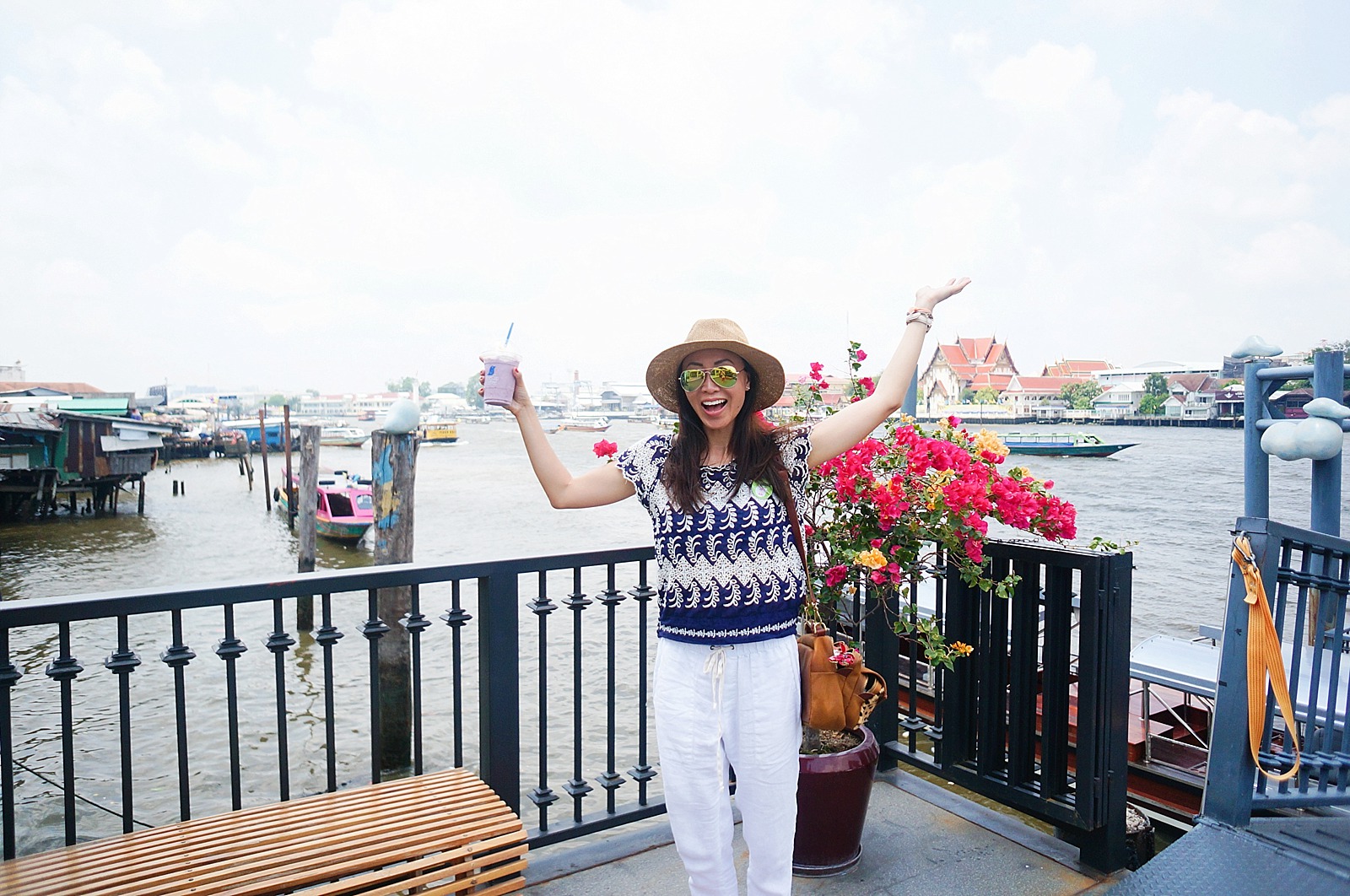 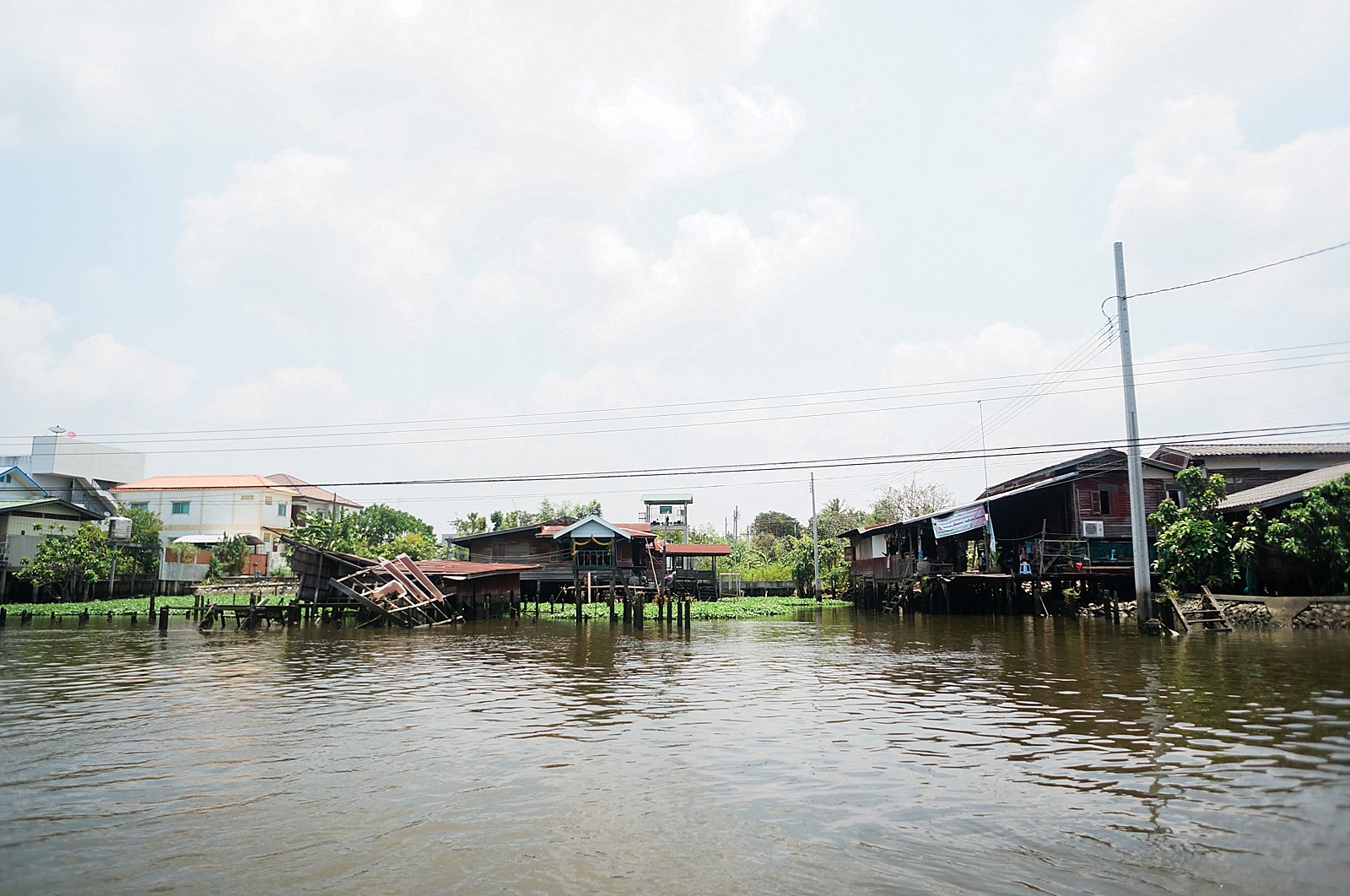 I paid 100 baat so I could take pictures with these magnificent royal barges that used to carry the king and his soldiers in war. 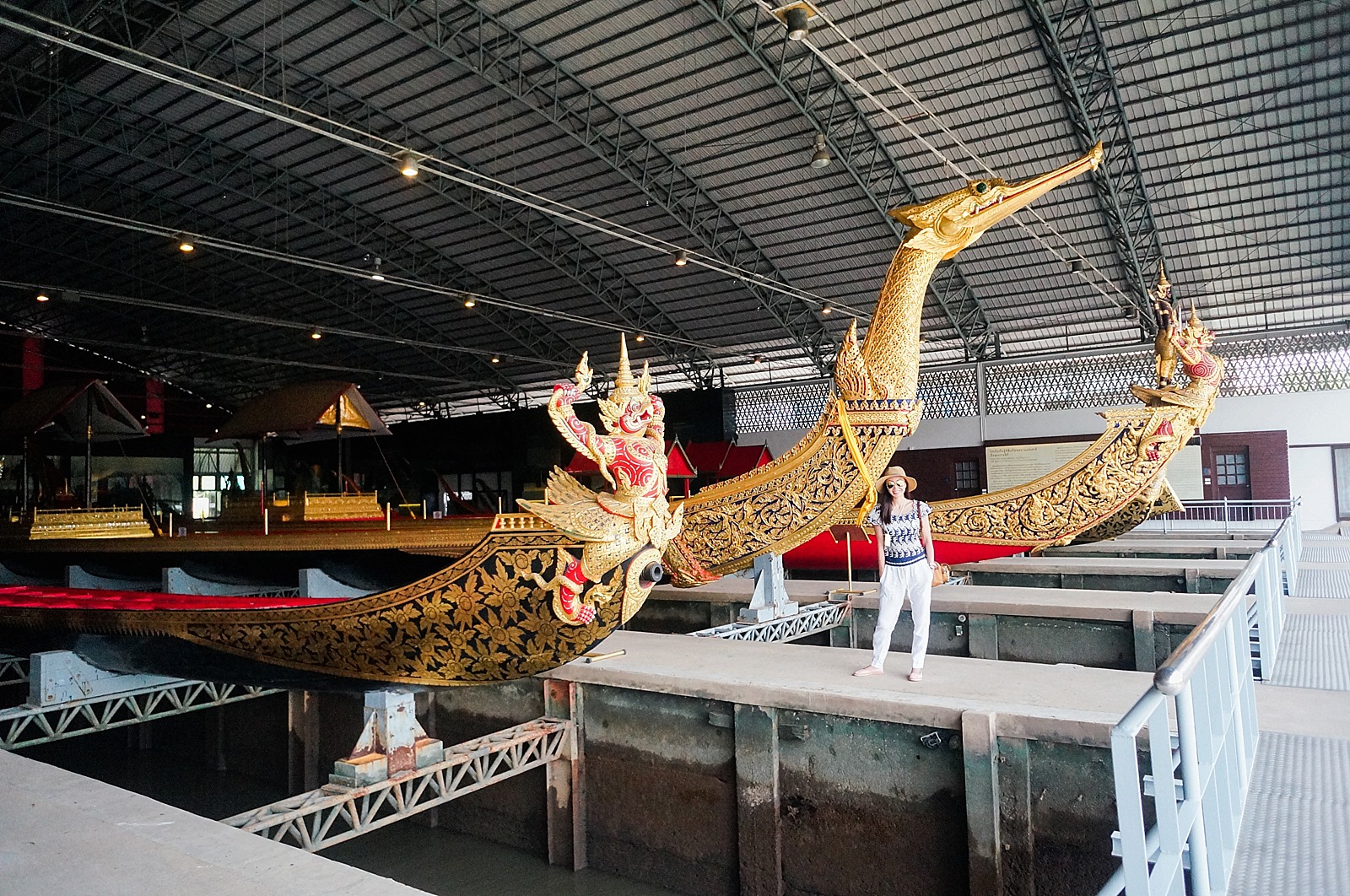 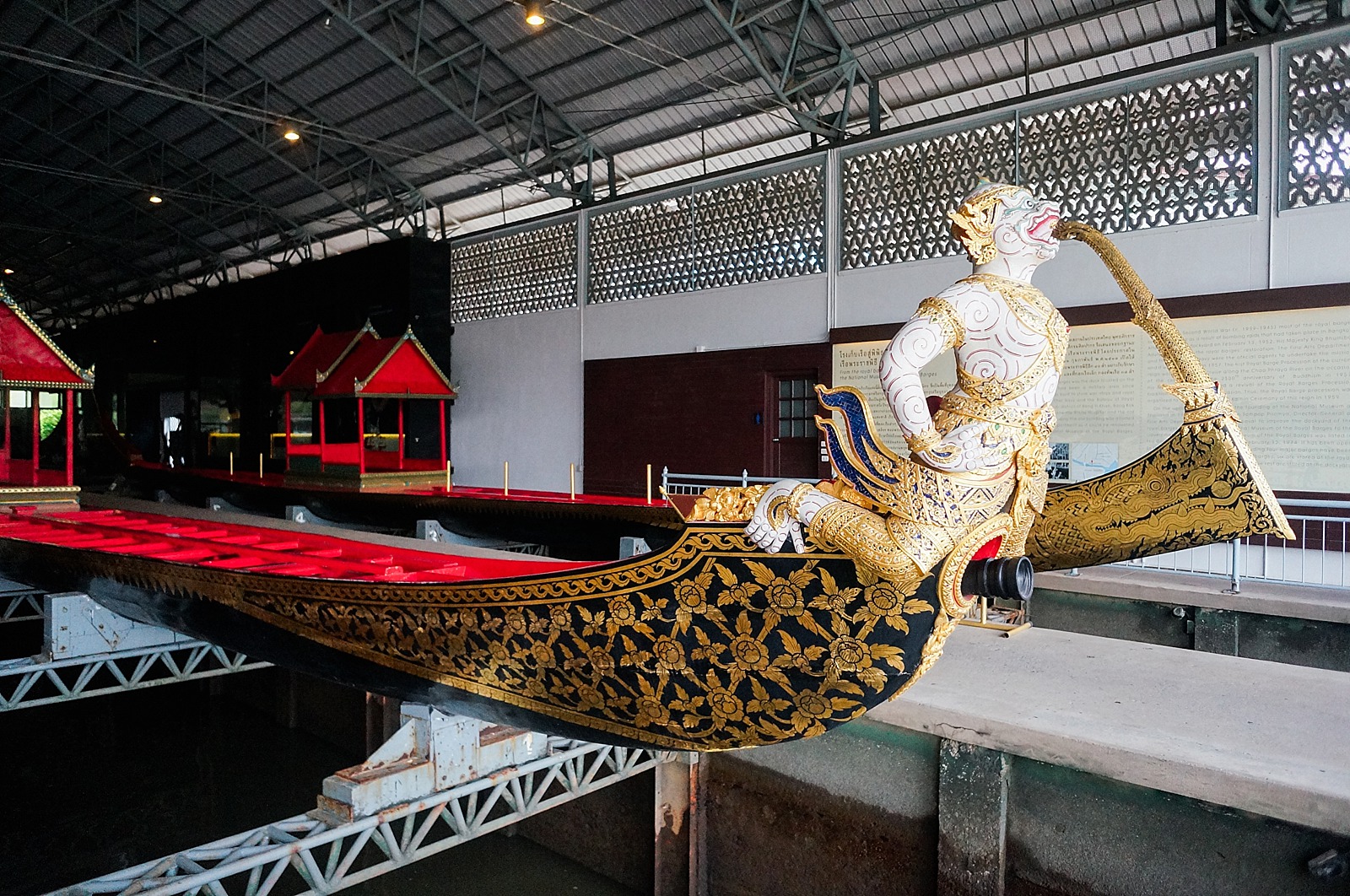 Then we ate some native fruit – rose apple and rambutan – What’s that you say Carlos? I’m too busy eating my mangos. Mangos were around $1 for an entire peeled one.

I made some new friends on this trip – I felt like it was almost like a cruise because you saw the same people every day and share the same passion for travel and exploring! A few people came alone (so awesome and brave) and Carlos was one of them and a few of us said we need to travel again in the future – we all clicked so well! 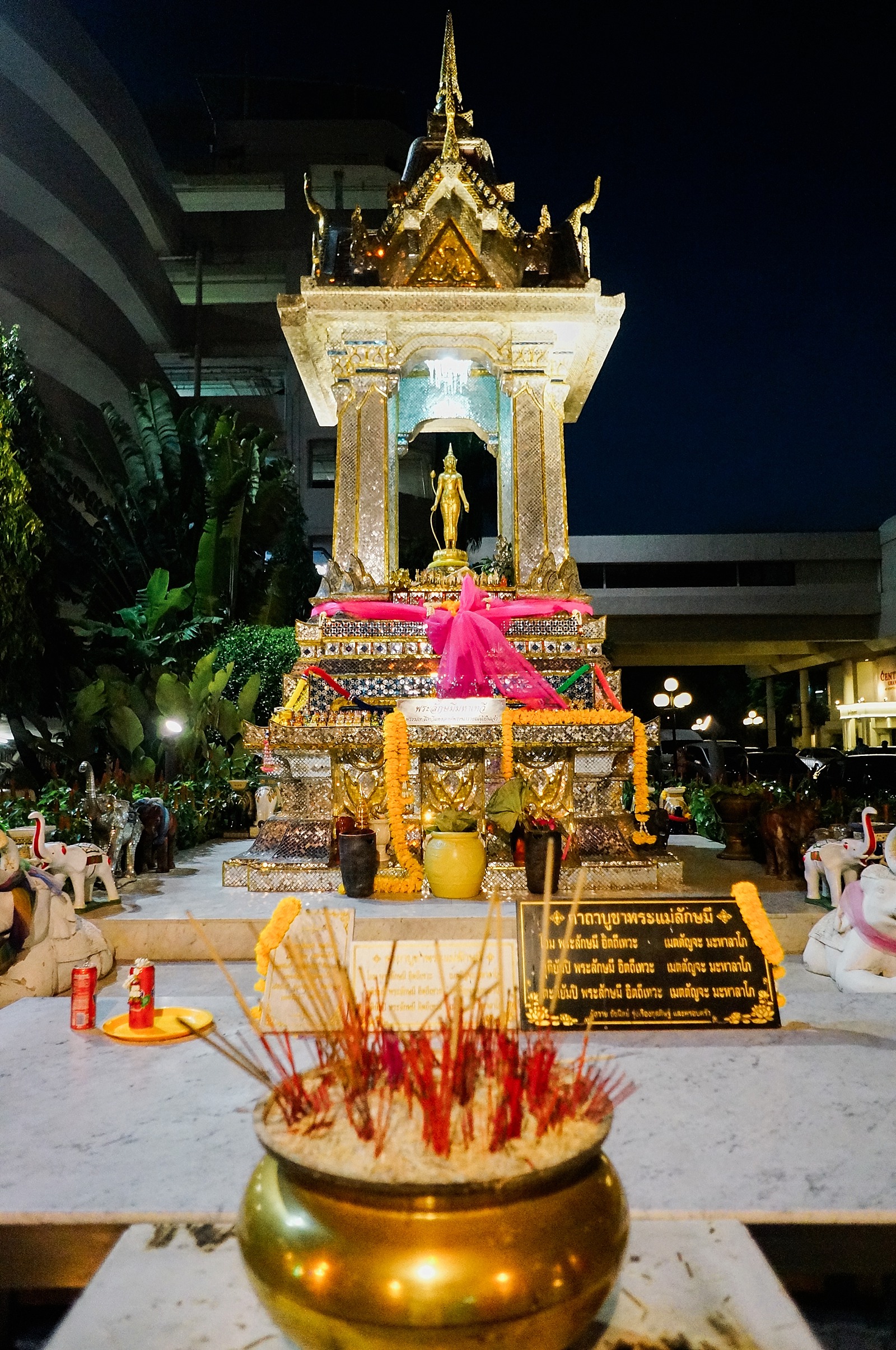 The Floating Market was so fun – the James Bond boat! We went to the Damnoen Saduak Floating River and it was a blast – to have the wind in my hair and see the pretty scenery along the way of homes and well, arrive at a fantastic tourist shopping area!

You can bargain with the locals – especially the first big market, the prices are higher than usual, you can typically ask for half of what’s marked. This is for the big major drop off market – then you will make your way through and see other stores that are better priced. Just remember, just because you see it once doesn’t necessarily mean you won’t see it again. 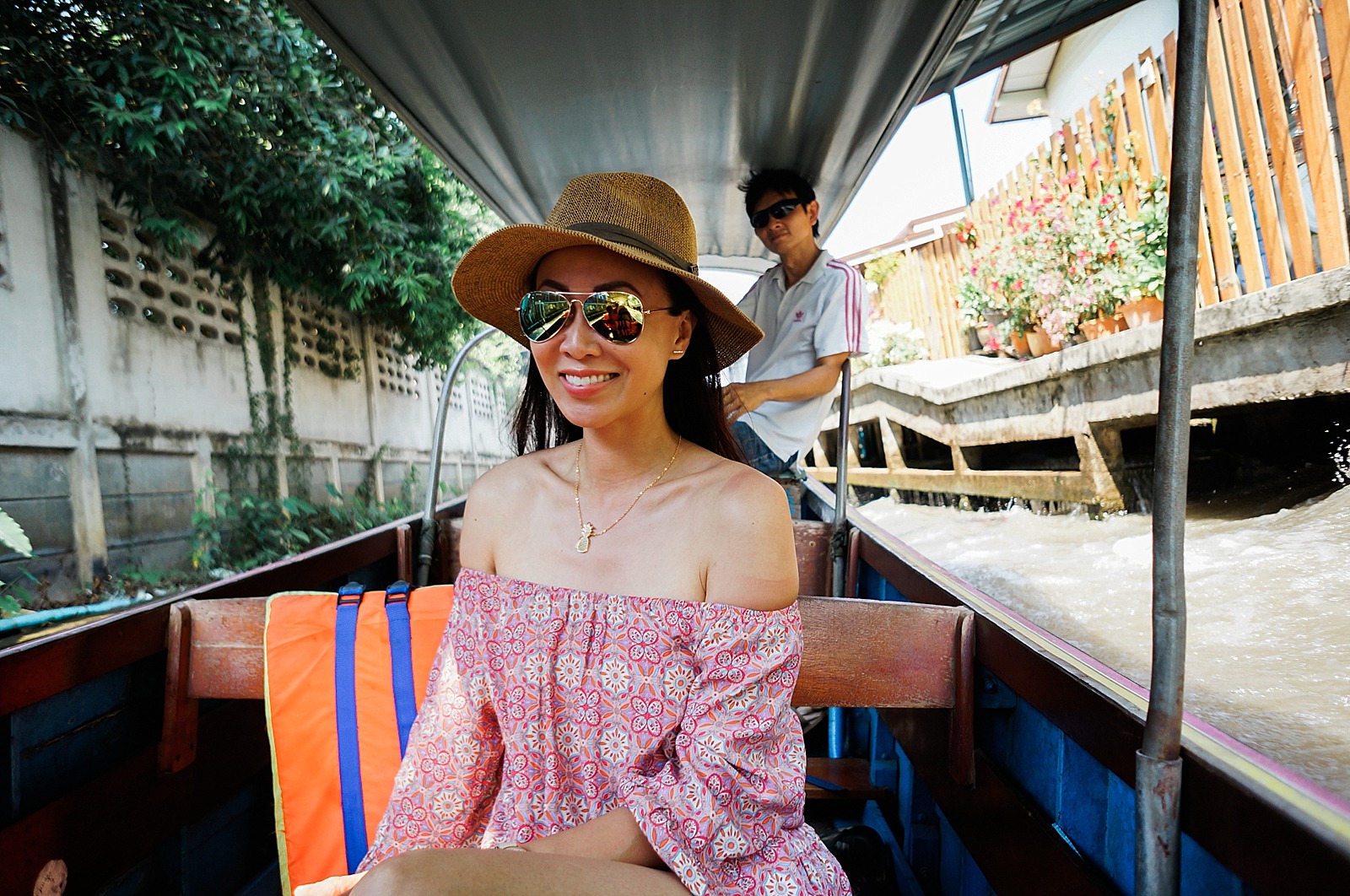 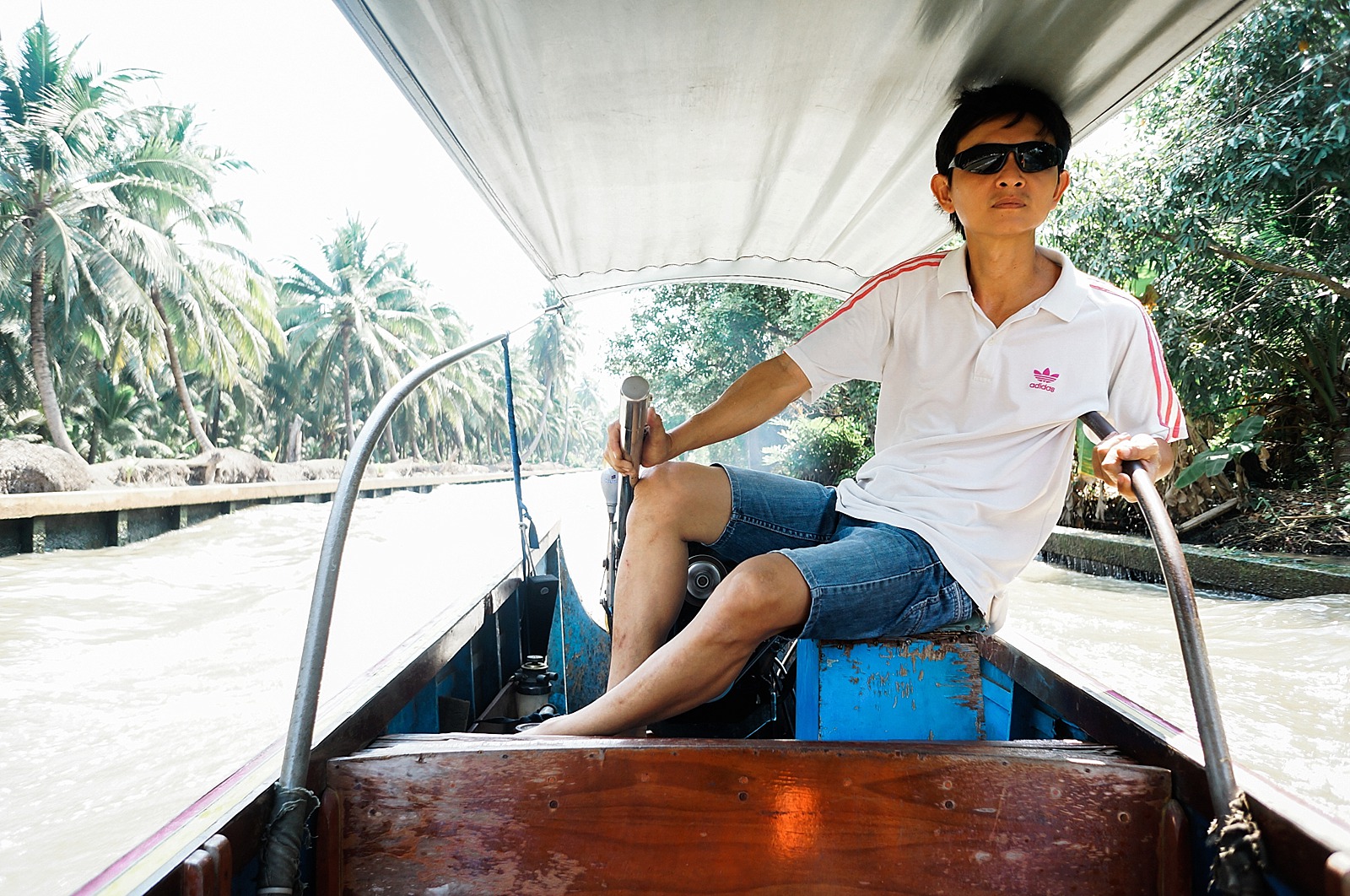 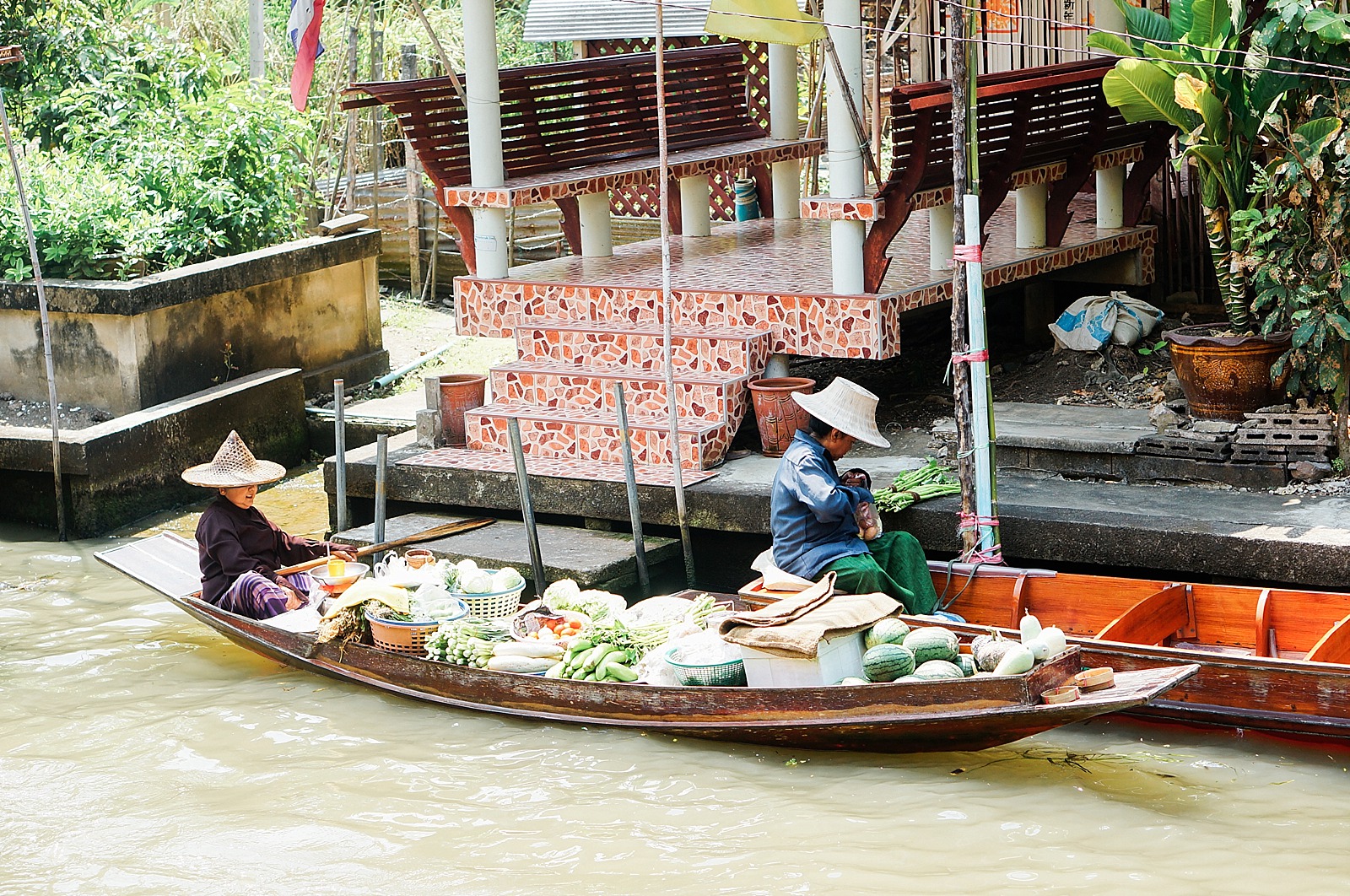 Highlight – holding a slow loris. Look at those eyes! He even looks like he’s smiling. He was a strong guy wanting to crawl and climb – with soft, padded feet. I only paid $3 to hold him. 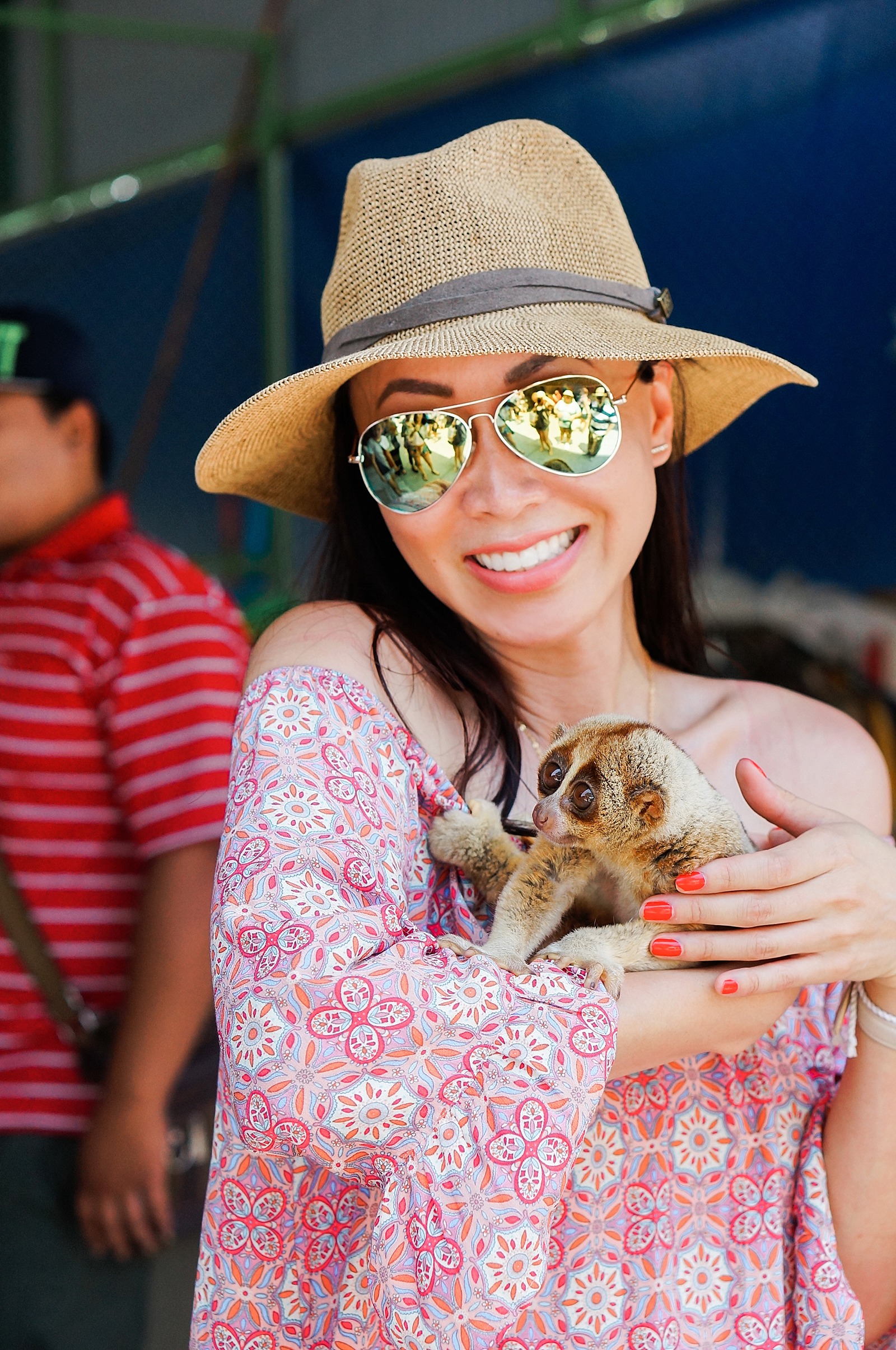 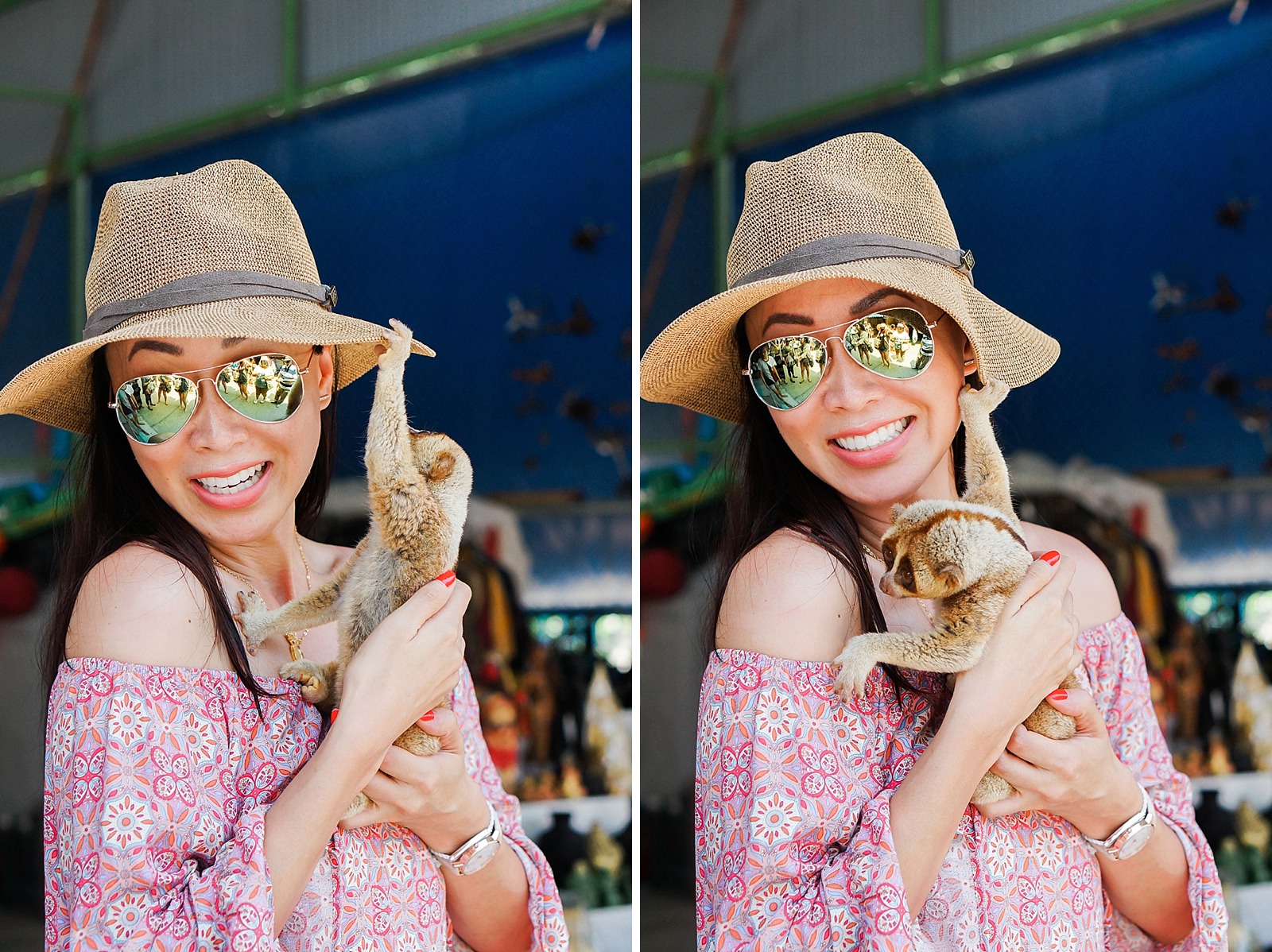 I decided to hold this monster – can you believe it? But wait, here’s why – when I walked by she held him and pet him super hard on the head and kissed his head like it was no big deal. So then I thought, hey, he must be pretty friendly so why not? I’m not scared of snakes. I’m fearful of bugs – if you saw on Snapchat I pretty much ran away from Rachel when a giant FLYING beetle landed by her. Bugs freak me out, snakes, not at all. 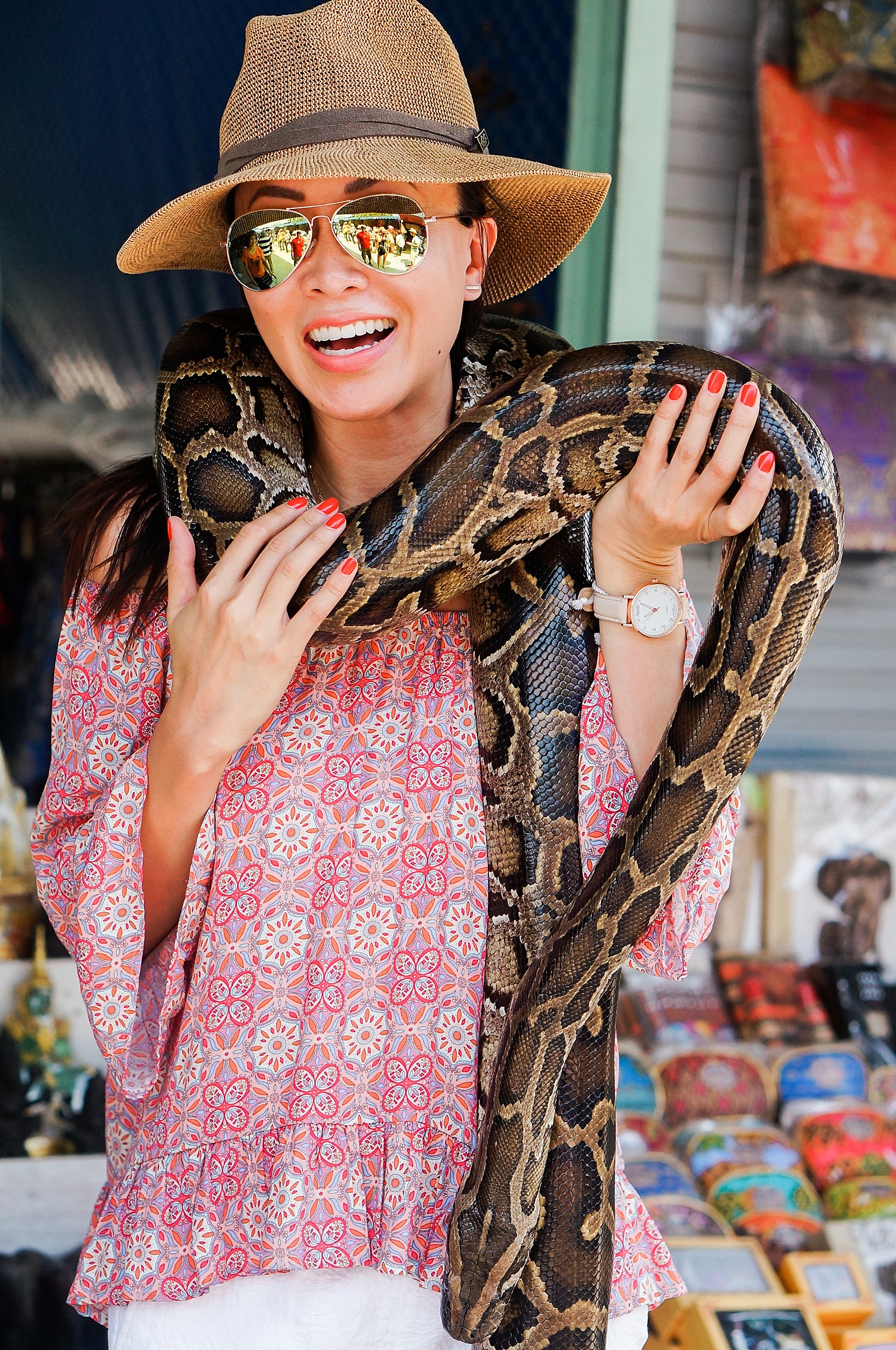 Riding in a tuk tuk

Kudos to Rachel for flagging down the tuk tuk. It was a little pricer than we expected (300 baht) but honestly, think about this, 30 baat is like $1. So are you really going to argue over 100 baht? It’s like $3. Your time is worth more than waiting for a cheaper one. Plus the experience is just fun and it might be best to beat the traffic back to your place! 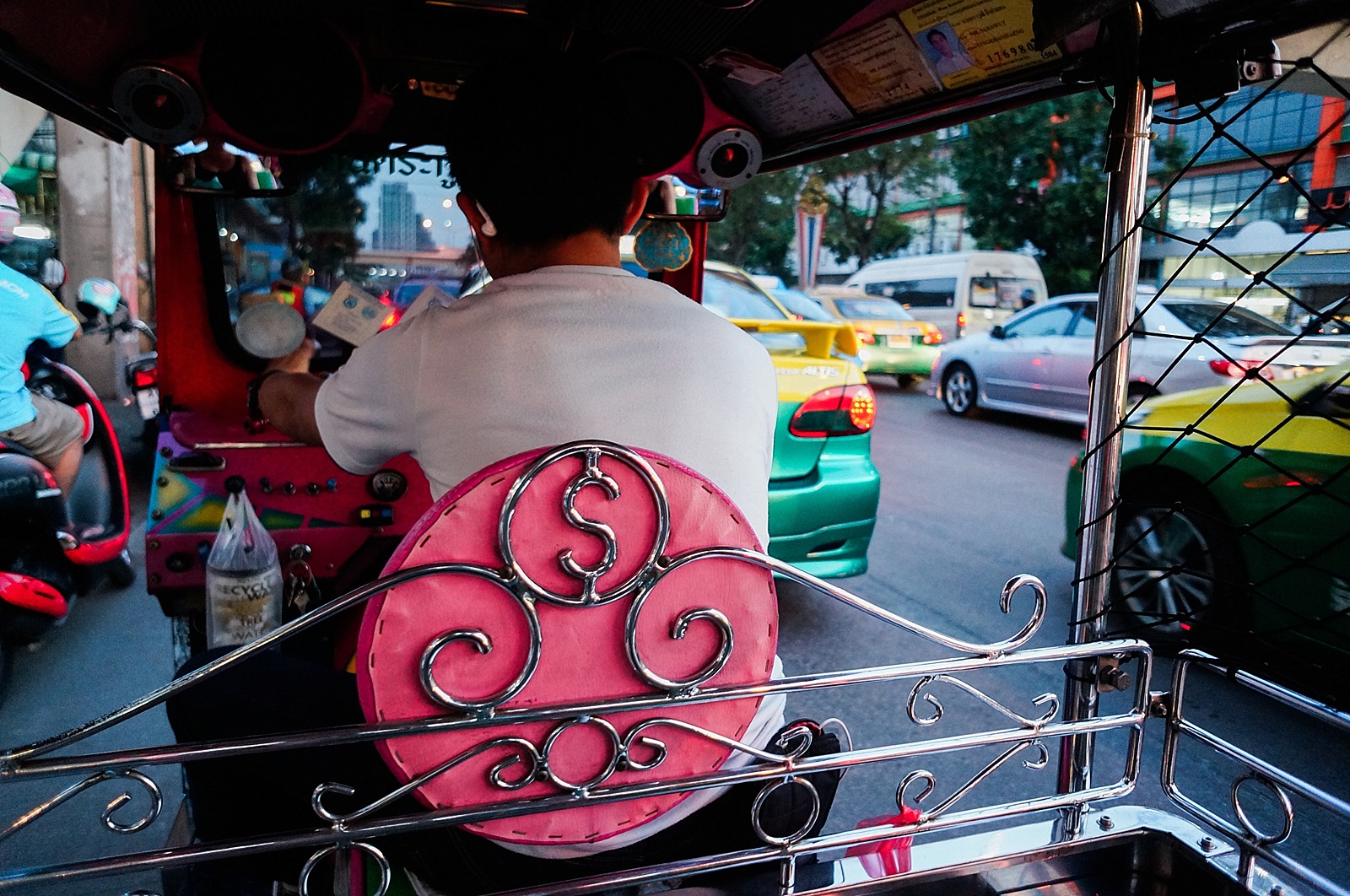 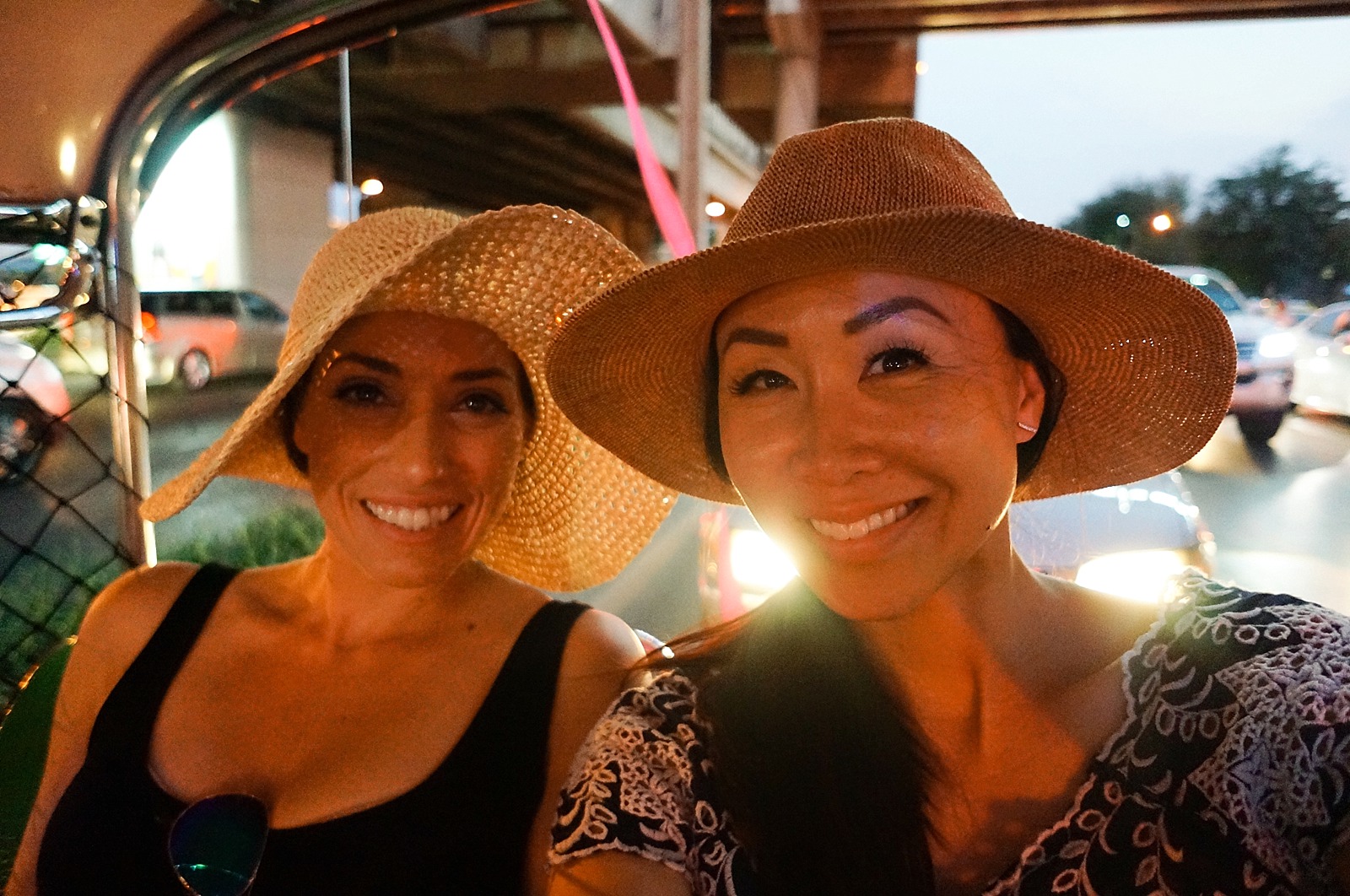 This stuff wouldn’t fly in the US – no seat belts or going fast on the freeway this way – so I’m glad I got to experience this in Thailand.

And I’m also really glad I got to witness this! 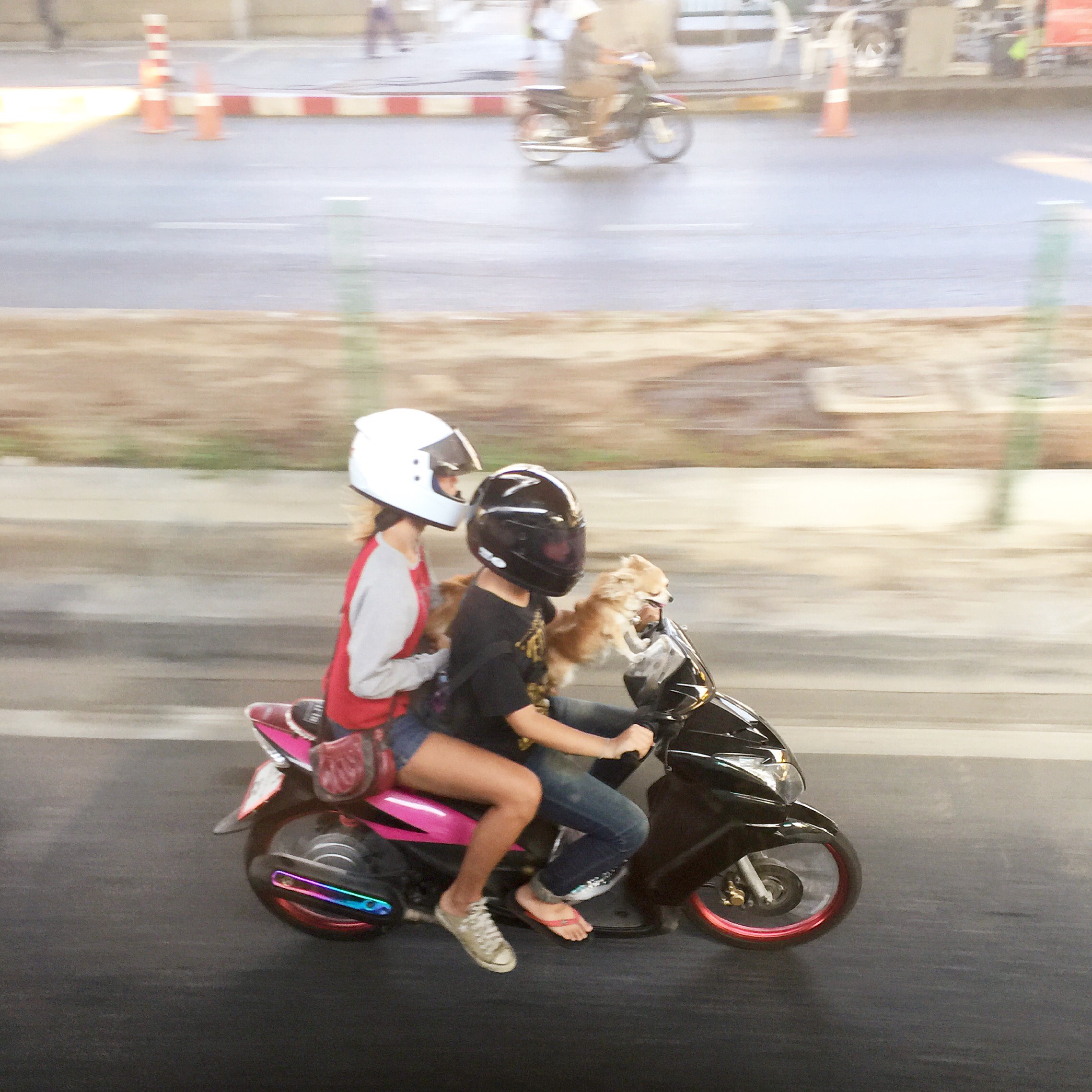 Photographs taken with a Sony NEX-5R and Canon G7 X.

There are 4 comments on Temples + Floating Market in Bangkok.