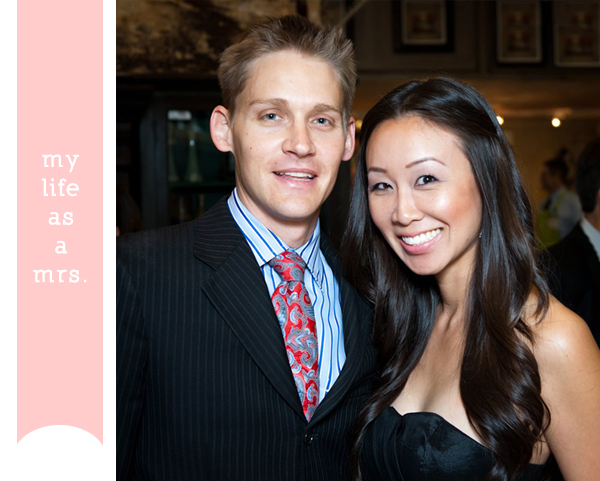 Our first photo together at an event, our third date on his birthday.  We were married six months later.

My best friend from college is convinced I need to write a dating book because of the blunt and humorous advice I give her. Here’s the thing – I’m not a dating expert, but I’m a girl who has dated a lot and has the most ridiculous stories as Jackie likes to constantly point out.  And when I say date, that doesn’t mean I kissed every person either, there were a lot of first dates and none that followed (thank goodness for Caller ID), and I’ve had long term relationships, long distance relationships, dated a celebrity in my early twenties, and I’ve had an engagement gone terribly wrong, until I found Mr. Wonderful.

There were lots of frogs.  Lots of jerks, lots of crazies, lots of…horrible dating stories, you get the point.  So while my bfforeverandever from college still bounces thoughts off me until she meets her Mr. Wonderful, I can’t help but give the single girls a little advice.  I have always given relationship advice even though my relationships were so wrong – I guess I was hoping in the middle of all my relationship column writing in college I would eventually find someone, but who knew I wouldn’t find him until I nearly gave up and almost married my house.

I can tell you that everything you ever want in a person is out there.  You’ll never have to feel like you’re settling, you’ll never feel like your heart is in a cage, and you’ll be accepted 100% for who you are – because that’s the way it’s supposed to be.  I want to remind you that you are a beautiful child of God who is made with your likes, dislikes, personality, interests, and disinterests for a reason.  You have skills and a gift that are to be used in this world for a very specific purpose and if anyone tells you that you need to change or something isn’t right with you, then you need to change your surroundings and boot them from your life.

Of course it’s very easy for me to tell you all the things a man should be – because I am a wife and married to my Mr. Wonderful.  But I also know what it’s like to be with someone who is emotionally abusive, degrading and a horrible human being.  I’ve had cigarette smoke blown in my face and told, “You deserve that,” by the jerk of a soap opera actor boyfriend, I’ve been given a list of things I was told I needed to change about my interests and personality by an ex-fiance, constantly called “Diane” by a college boyfriend’s mother, and I’ve been cheated on, and lied to by past boyfriends.  So while I have the perfect husband for me and who I know is my soul mate, I have been there just like every other married woman, that time in life when I’ve been annoyed with dating, annoyed with men, and annoyed with what little options I felt I had, convincing myself that this, was as close as I’d get to love.

So if you haven’t met your Mr. Wonderful yet, don’t be discouraged.  He’s out there.  And if you’ve had a horrible dating history like yours truly, even if there’s not one that comes close to marriage potential, remember it just takes ONE.  You’re just looking for that one to marry.  It’s not the one that comes close enough, it’s the one that’s an absolute, perfect Cinderella glass slipper fit perfect.  Don’t waste your time with someone you can’t see being your husband, who you don’t respect – and really focus and pay attention to the person in front of you.  When a person tries to show you who they really are, let them.  Don’t make excuses for their behavior, circumstance, or convince yourself that you can change them, or think marriage will make them better, or even that you need to change.  As much as a guy chooses you, ultimately you can choose him back, that’s why the guy asks the girl for her hand in marriage – she can say yes, or she can say no.

Hold tight to who you are and don’t let anyone change you because one day you’ll meet a man who will tell you that he hopes you’ll never change – it’ll be perfect, like God’s will.  Meanwhile, make a list of all your crazy stories, it can be pretty entertaining, like this post I wrote in 2011 before I met Benjamin.

There are no comments on Dating Advice.