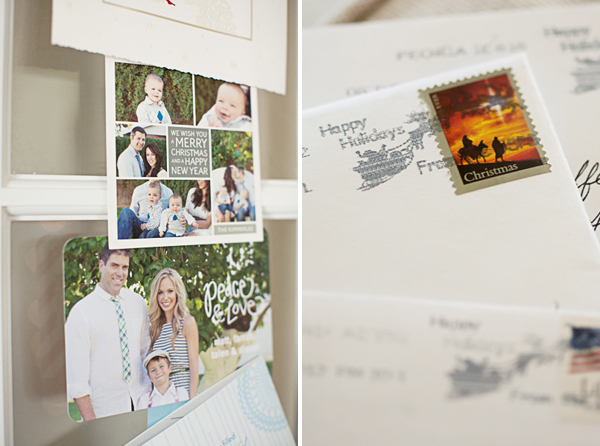 You can call me a paper freak.  I love the boutique paper lines, I have post-its with names of recipients I’ve already sent a boxed card to, you know, in order to avoid anyone getting a duplicate -the horror!

With that said, our Christmas cards have gone out to our 175+ on the list in multiple spurts since I’ve been waiting for envelopes and then cards, and then more envelopes.   Mr. Wonderful is still in shock that he inherited such a large group of friends.  It’s early December, yet I feel like I’ve already received more than half of expected Christmas cards, woah.

As you start to receive your cards, a few suggestions:

The new thing I’m loving lately:  Instead of a letter, the update on the family is on the back of the card.

Also, if you’re a photographer and you’re doing any mini sessions or Christmas sessions, do not post your clients photos on Facebook or your blog until you know their Christmas card has gone out.  Don’t tag them on Facebook in a sneak peek, in fact, don’t post them anywhere at all until you either ask them, or you know all recipients have seen the image.  Clients nowadays want to be the first to reveal their professional photos in a Christmas card.  It’s the new surprise thing.

Diana Elizabeth wants every friend who received her Christmas card to know that she may not be able to top it year after year, please relieve her of the pressure.  Or perhaps the pressure is just on herself.  *wink*