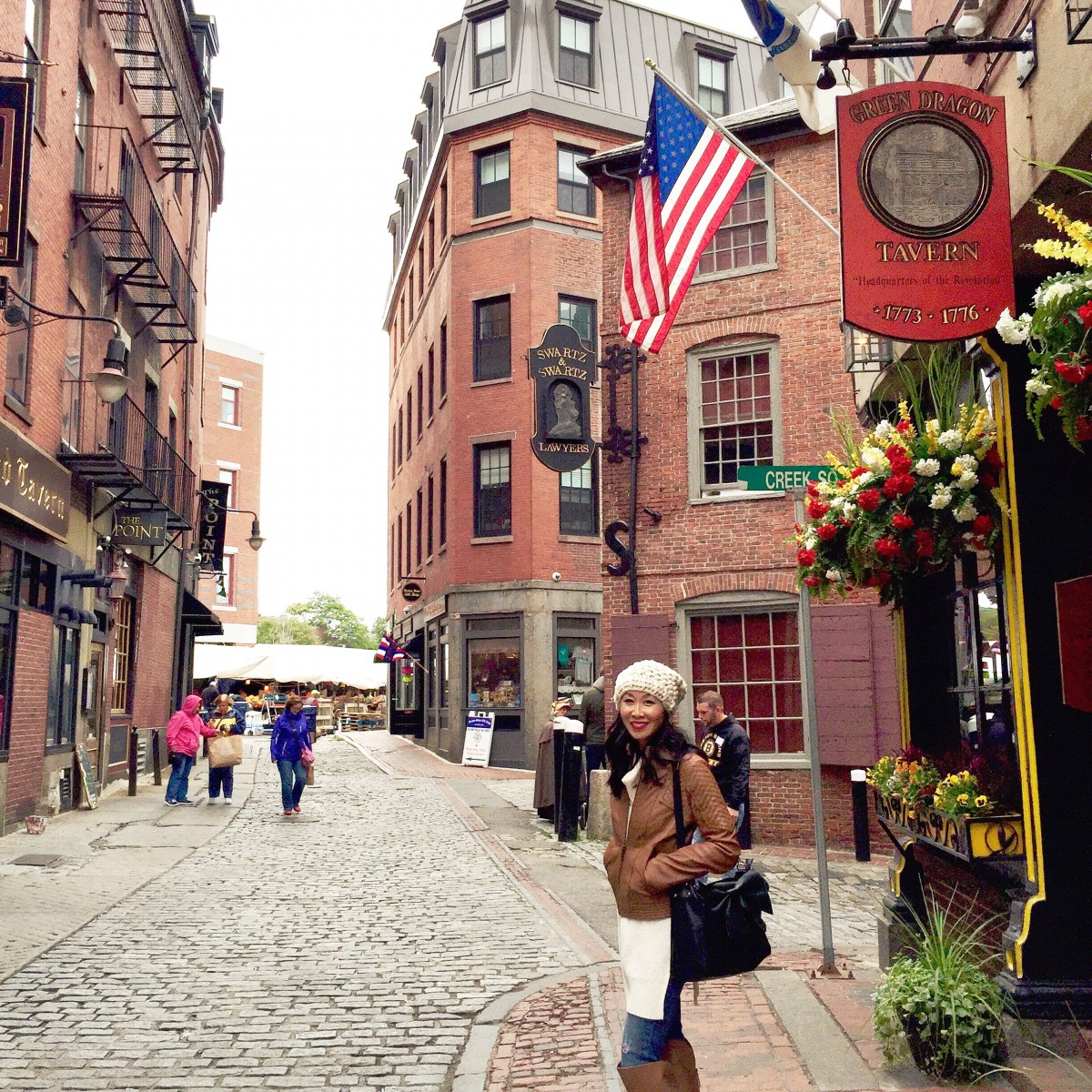 I have always wanted to go to Boston in the fall for as long as I can remember. I’ve been to a lot of the United States and East Coast but beyond NYC, DC, Virginia and Rhode Island, those little states between further up have been a harder mission to get to.

I went for the Wayfair Heart Home Conference for home bloggers, I’m also a Wayfair Homemaker Blogger and I figured that was a good excuse as any to get my butt on a plane and just go! Mr. had to stay at home to work, sales is always a tough thing with hitting monthly numbers, so I invited any girlfriend to come along since I had hotel paid for – and this babe, Sommer decided to be my parter in crime! Sommer is also a great traveling companion (it’s amazing to find out you’re both on the exact same page in speed and interests). Find her on IG @sommertimetravel. 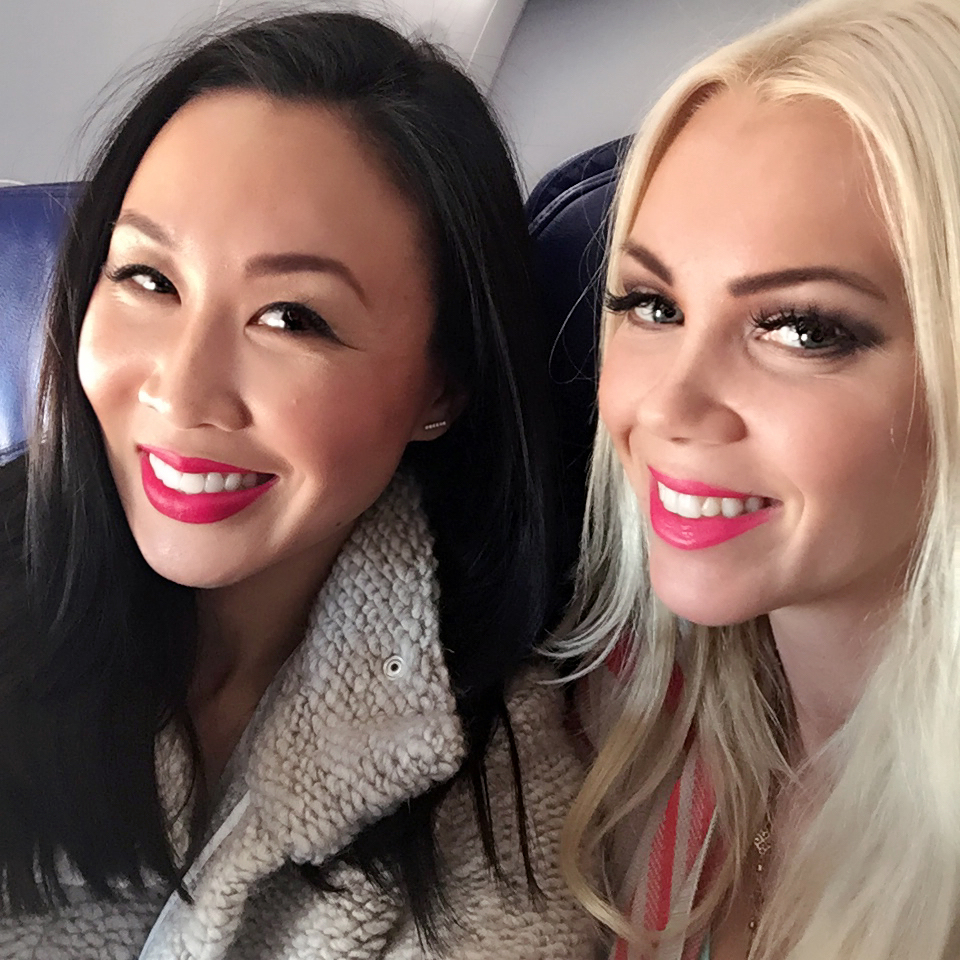 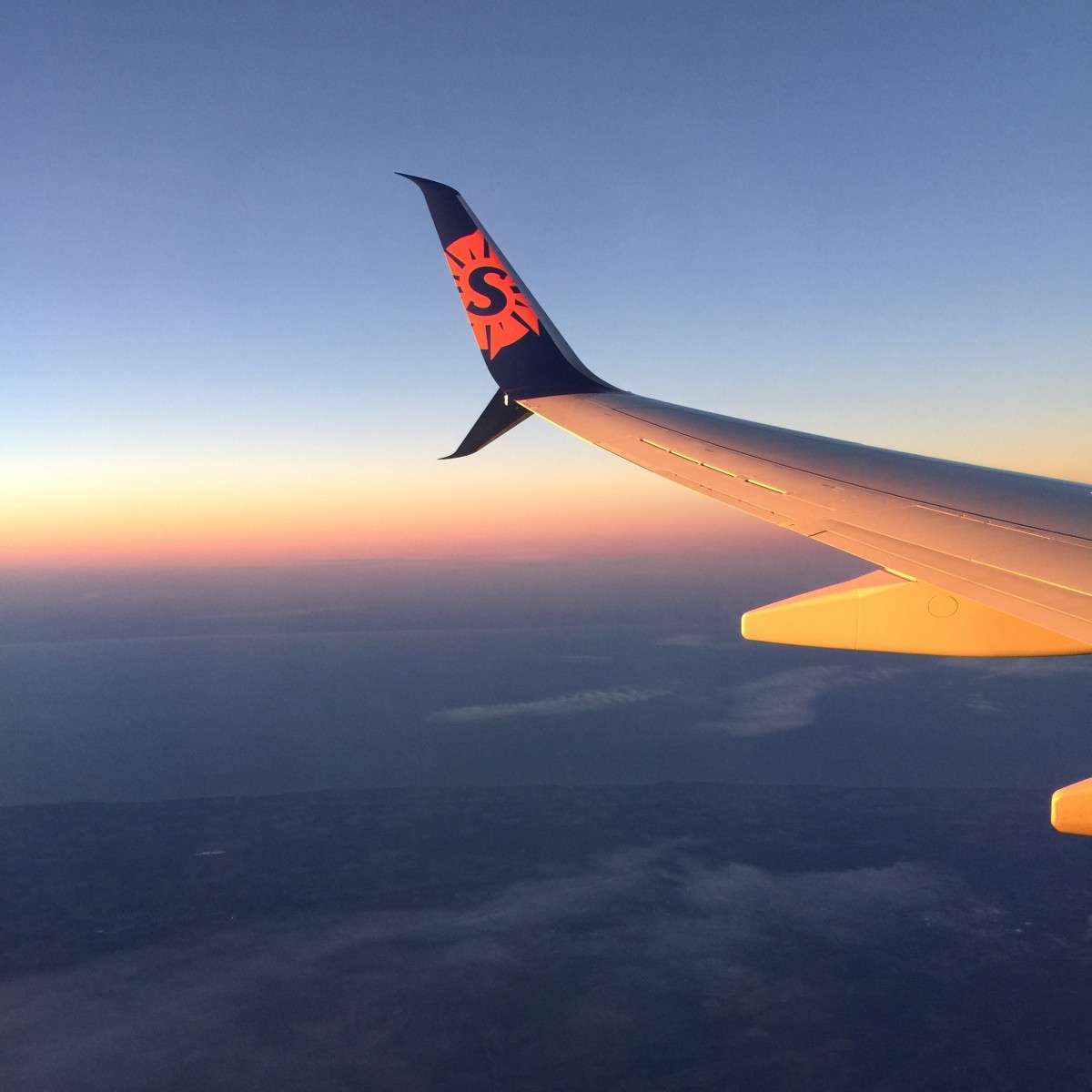 What airline is this? Sommer found a round trip from PHX to BOS for $250 on Sun Country Airlines! The layover was just in Minneapolis really quick. Once we landed in Boston our hair was blowing, and I realized, I should have packed a warmer jacket! 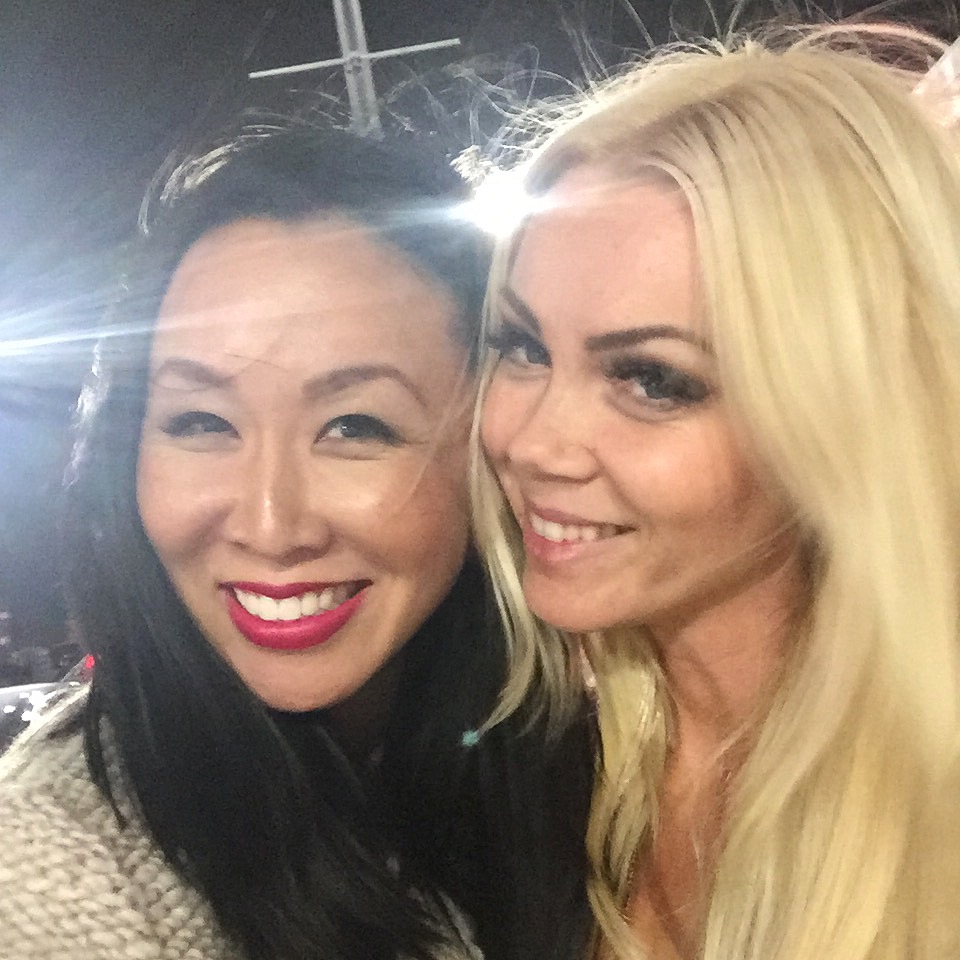 The next day, I attended the Wayfair conference – here I am at the hub in the Wayfair offices which was huge and absolutely gorgeous. I love everyone at Wayfair, they are just as cheery and happy as you would expect – they get to work in a beautiful office, you can tell the culture is wonderful too. 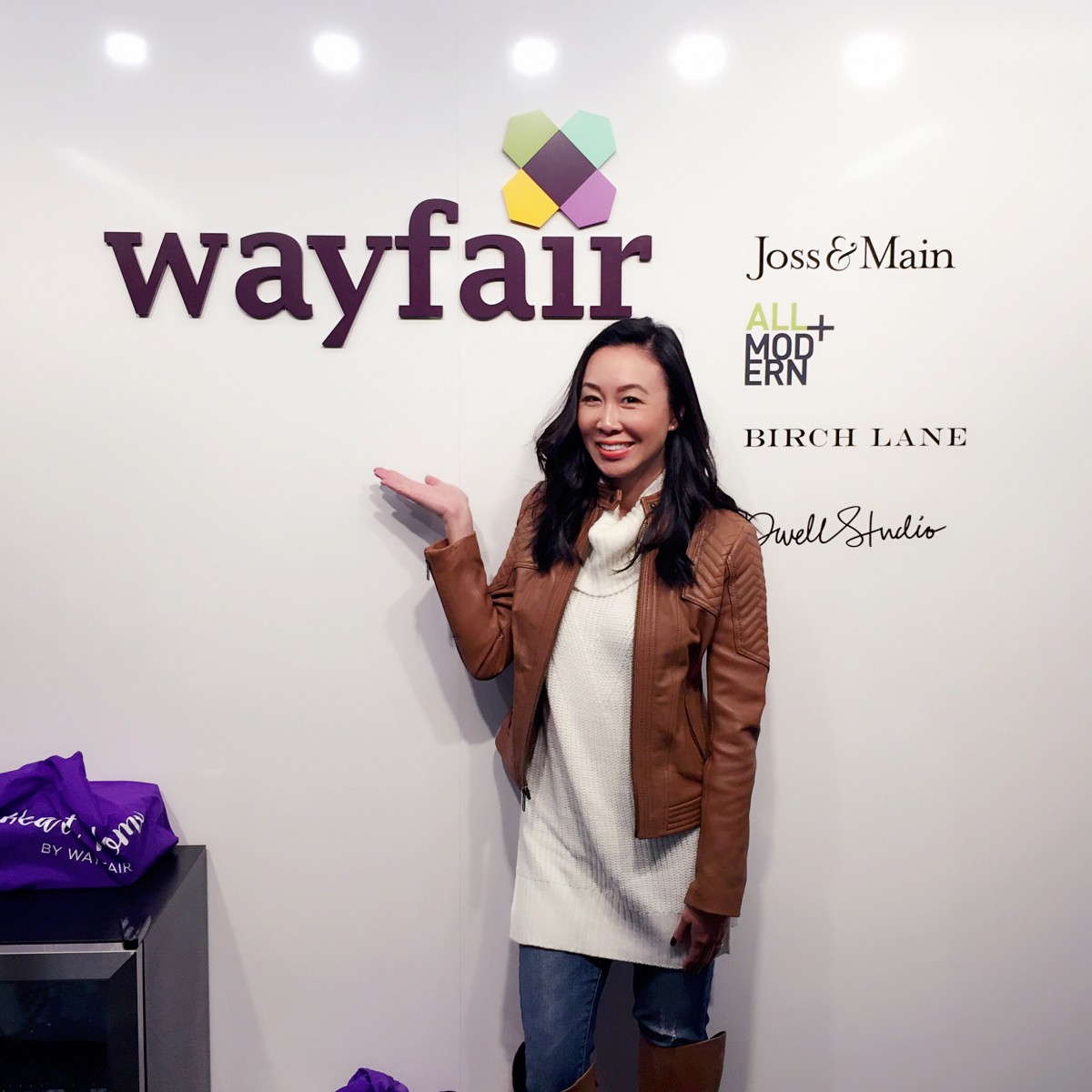 I met Maxwell Ryan who started Apartment Therapy – you’ve probably heard of that website and landed on it several times if you are into home decorating. He signed my book with my name *leap into the air*! He was the keynote speaker and gave such a great talk, the conference was packed with just amazing tips and tricks from experts and encouragement to blog about what we love – home decorating! 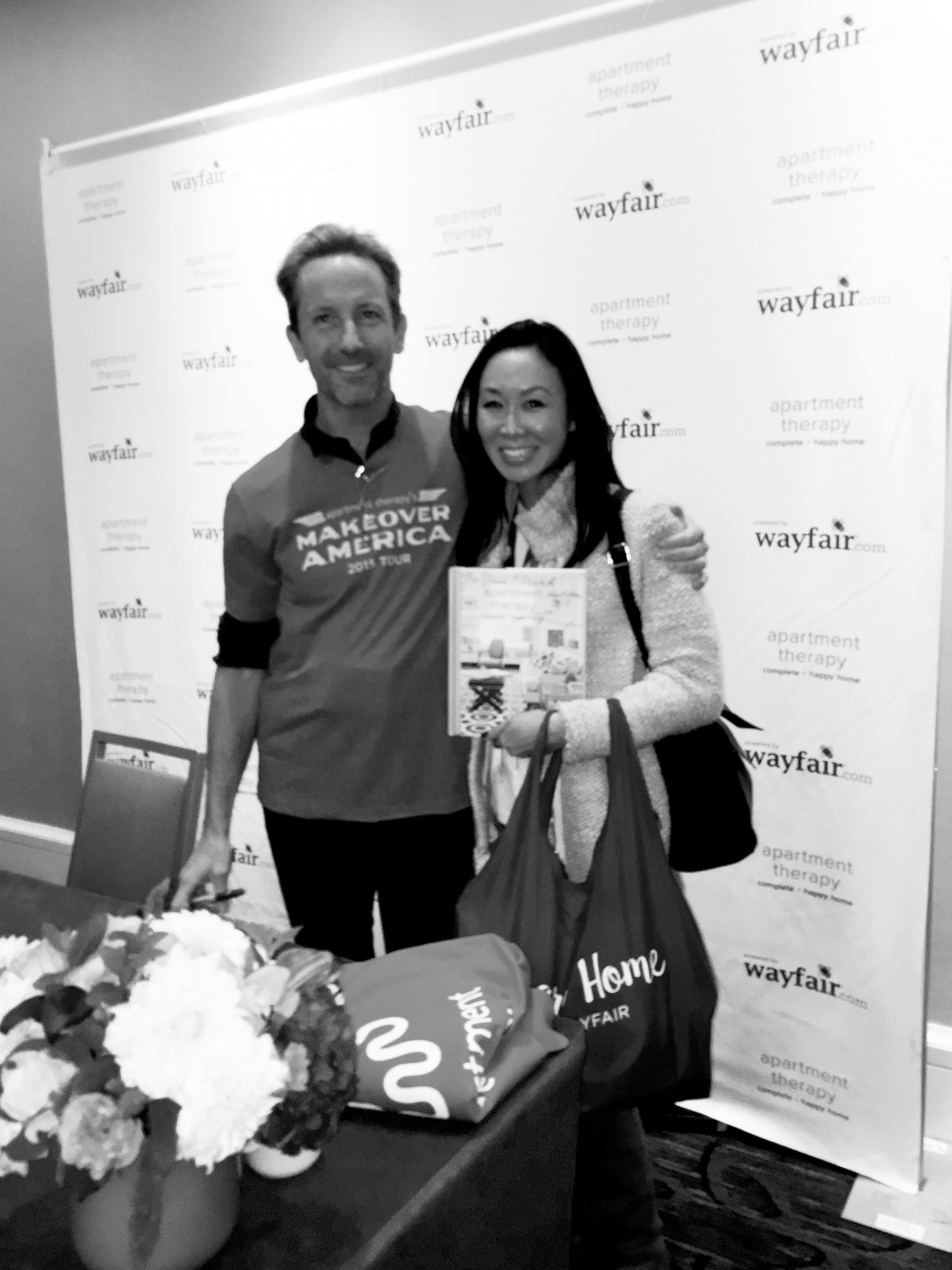 There were areas set up with companies and Joss & Main is a Wayfair company and challenged us to decorate the couch and take a picture. Well, I wasn’t surprised when I sat in there and saw that I blended right into the scenery. As my friend Emily said, “Where are you? I can’t see you!” 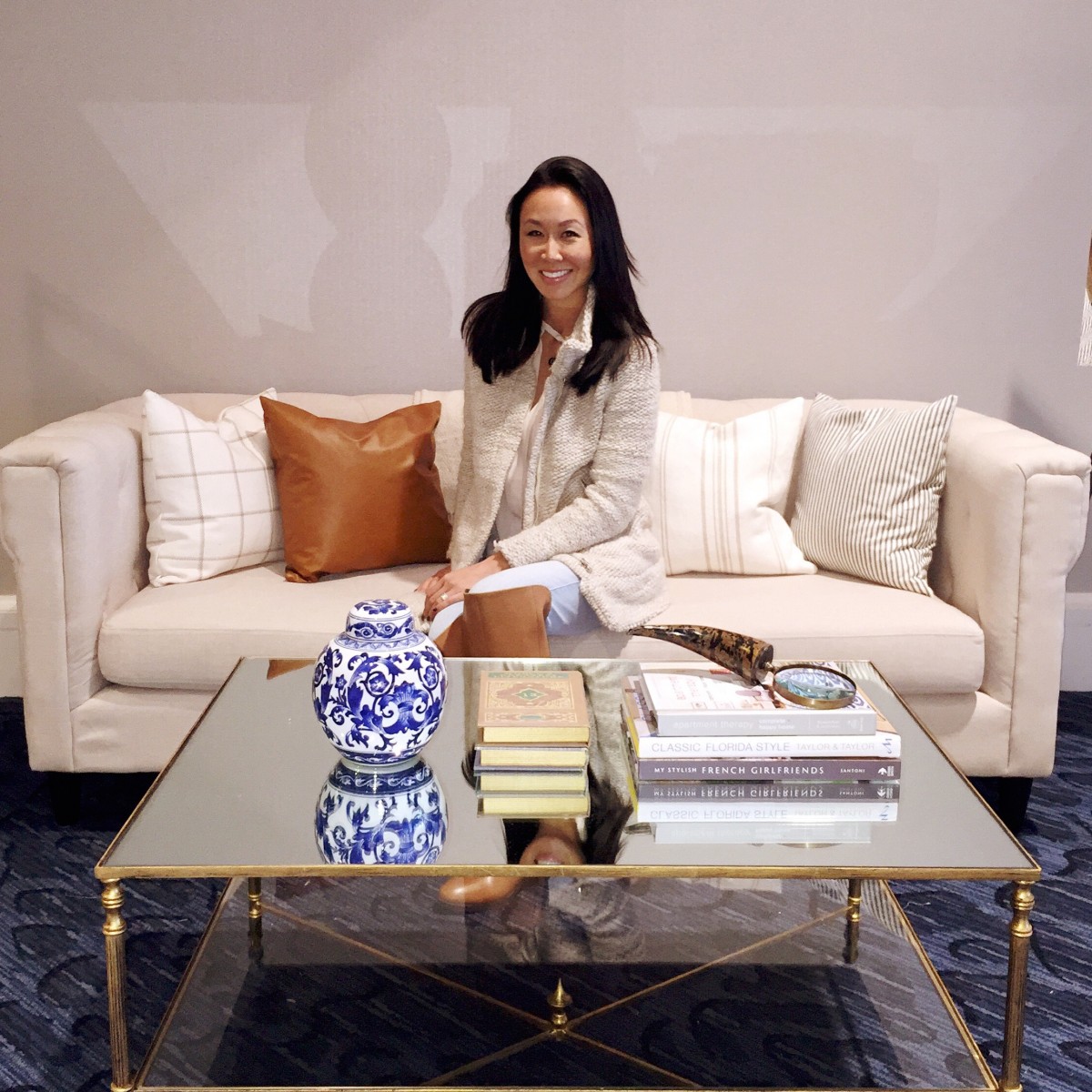 So while half of the day I was in class, Sommer did her thing and met me back with plans.

First, Gardner Museum! We took the T (subway). I am so thankful for Sommer planning and guiding everything, she was the absolute best! Yes, it was raining and I was loving it – see my smile? 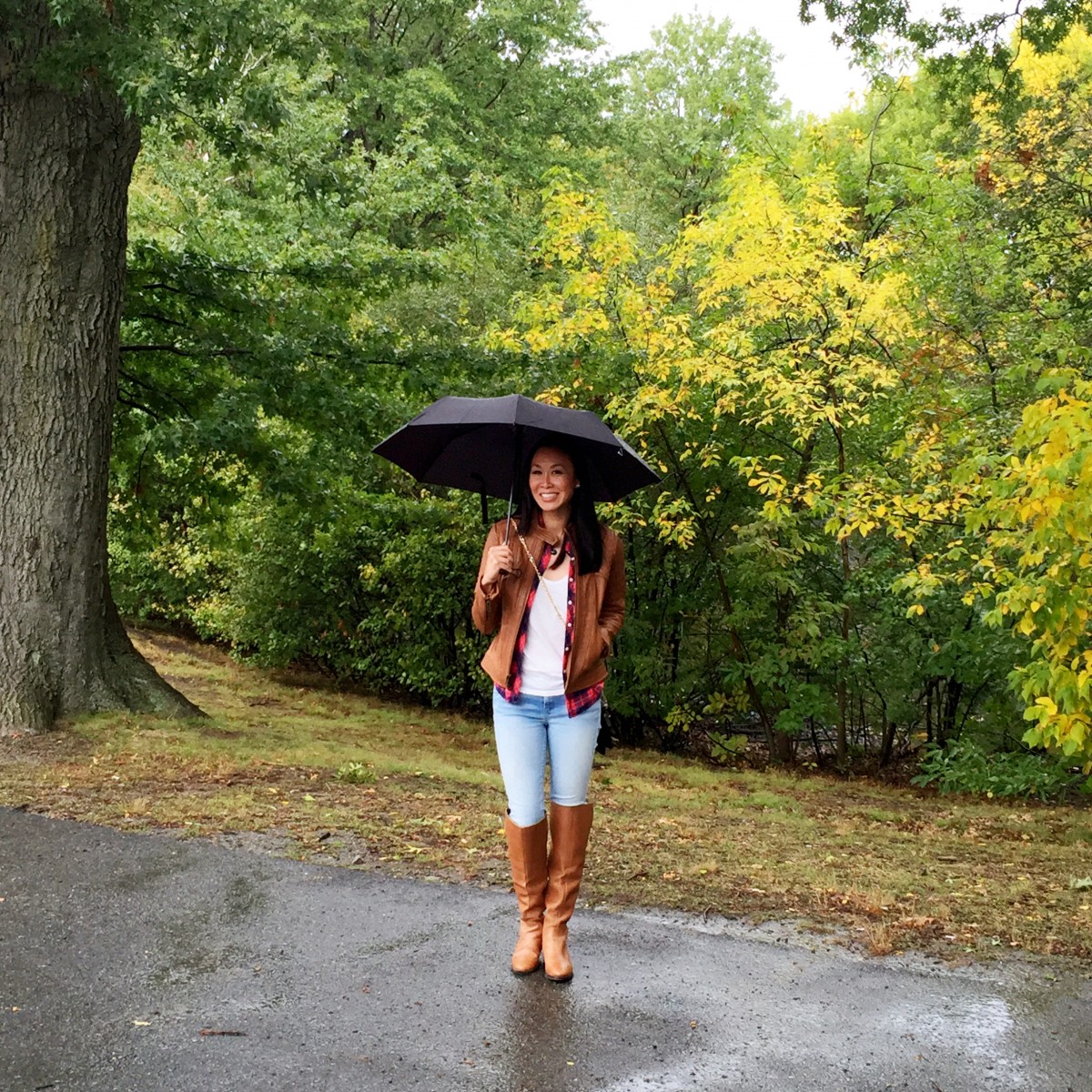 If your name is Isabella, or it’s your birthday, you get in free, just FYI ;) When Sommer stumbled upon the Gardner Museum I was all about it – even though it wasn’t about a garden, I saw photos of one and it looked spectacular! So off we went, $5 for students, $15 for adults. We had one hour to take a peek and we could only take pictures in the courtyard. We weren’t allowed to go outside in the garden because it was raining. 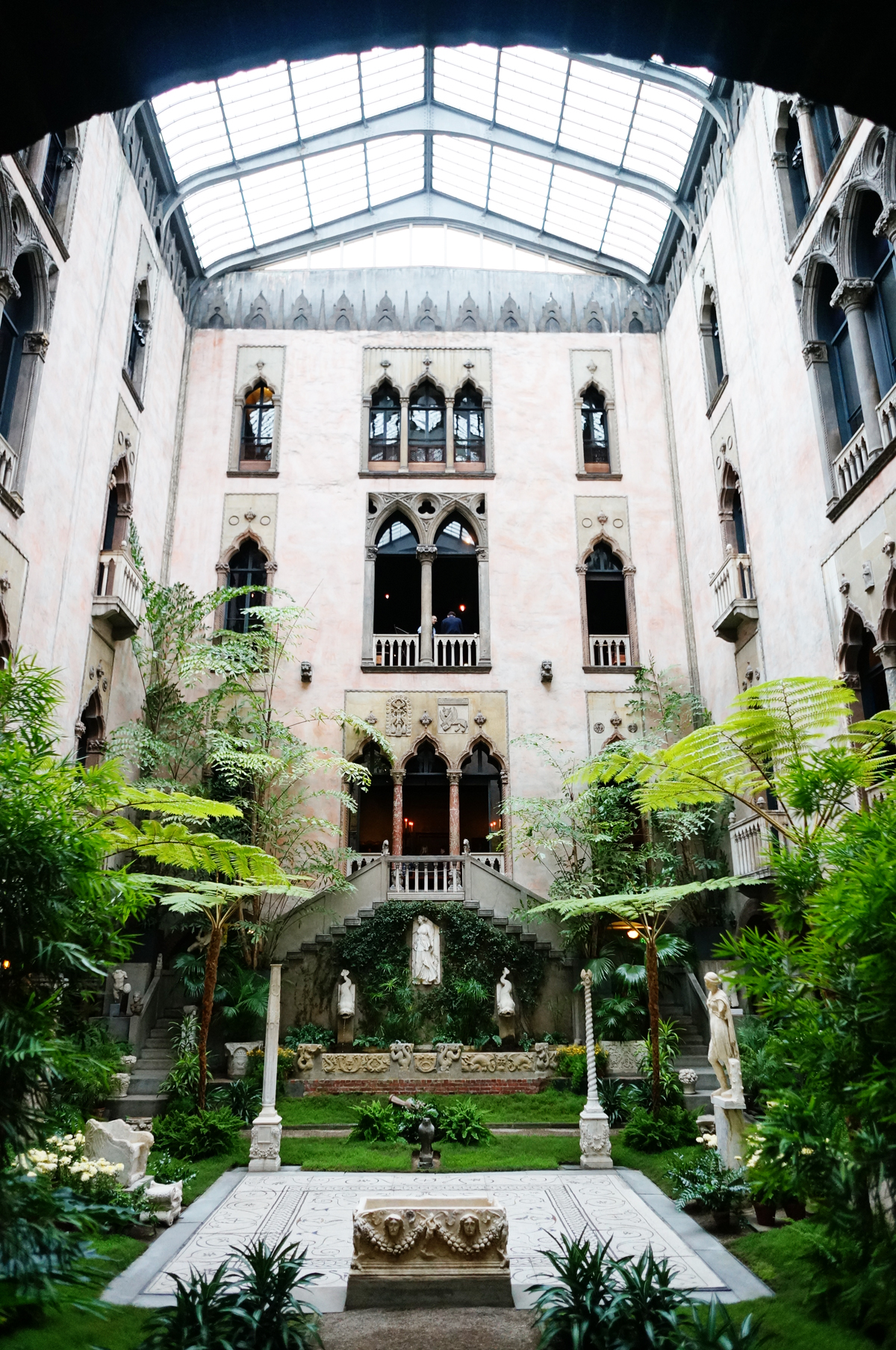 That was fine because Sommer and I just spent most of our time in the courtyard anyway. Umbrellas have to be in bags, you can’t use a selfie stick and if you’re carrying a coat make sure it doesn’t brush up against the artwork. There are a lot of rules and people in every room making sure you don’t disturb or accidentally brush up against the artwork or walls – I get it, it’s a museum.

Isabella Gardner was left her father’s fortune when he passed and was encouraged by friends to accumulate a beautiful collection and when it grew, she decided to build a place to house her collection – she called it Fenway Court (as you see) which opened in 1903. She hired an architect but she had her input on specifications. The three floors are breathtaking, you’ll just have to take my word for it and visit. 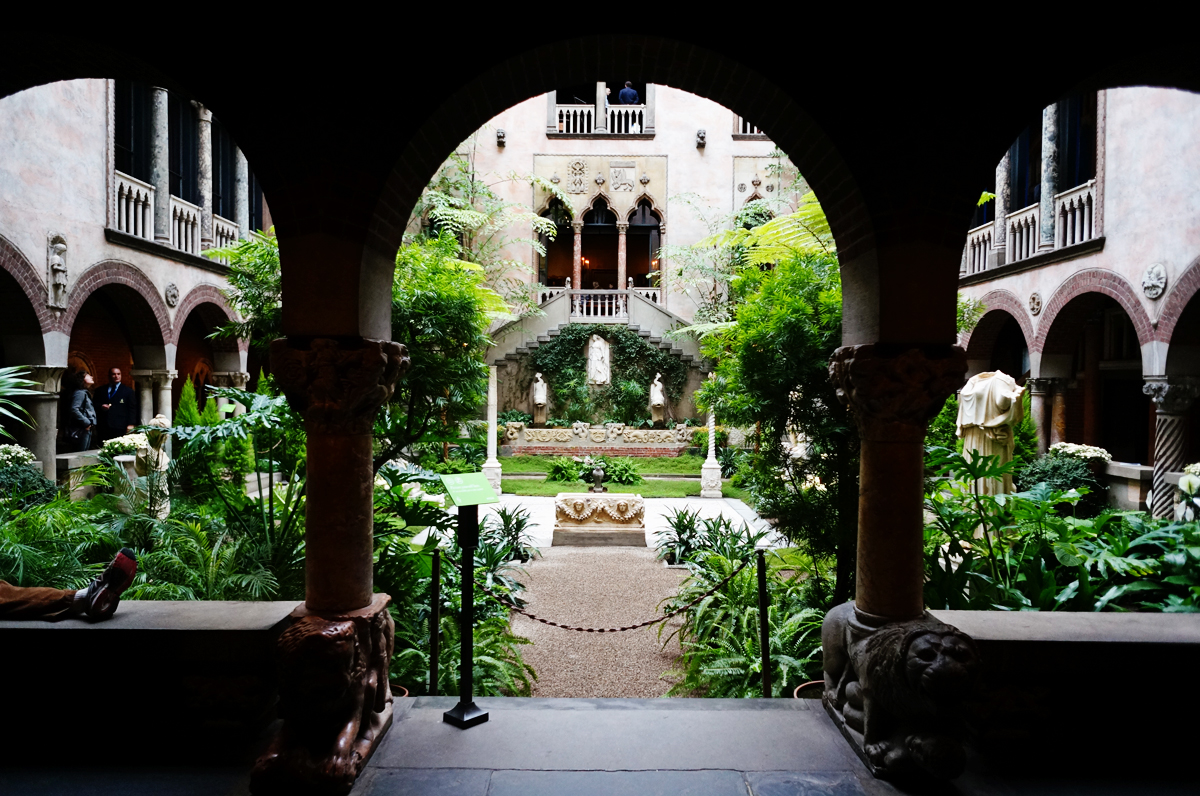 There was a wing off to the side of the courtyard we had permission to photograph because it was still almost outside – and the guard timed us and told us we had two more minutes before the museum closed. Pressure! 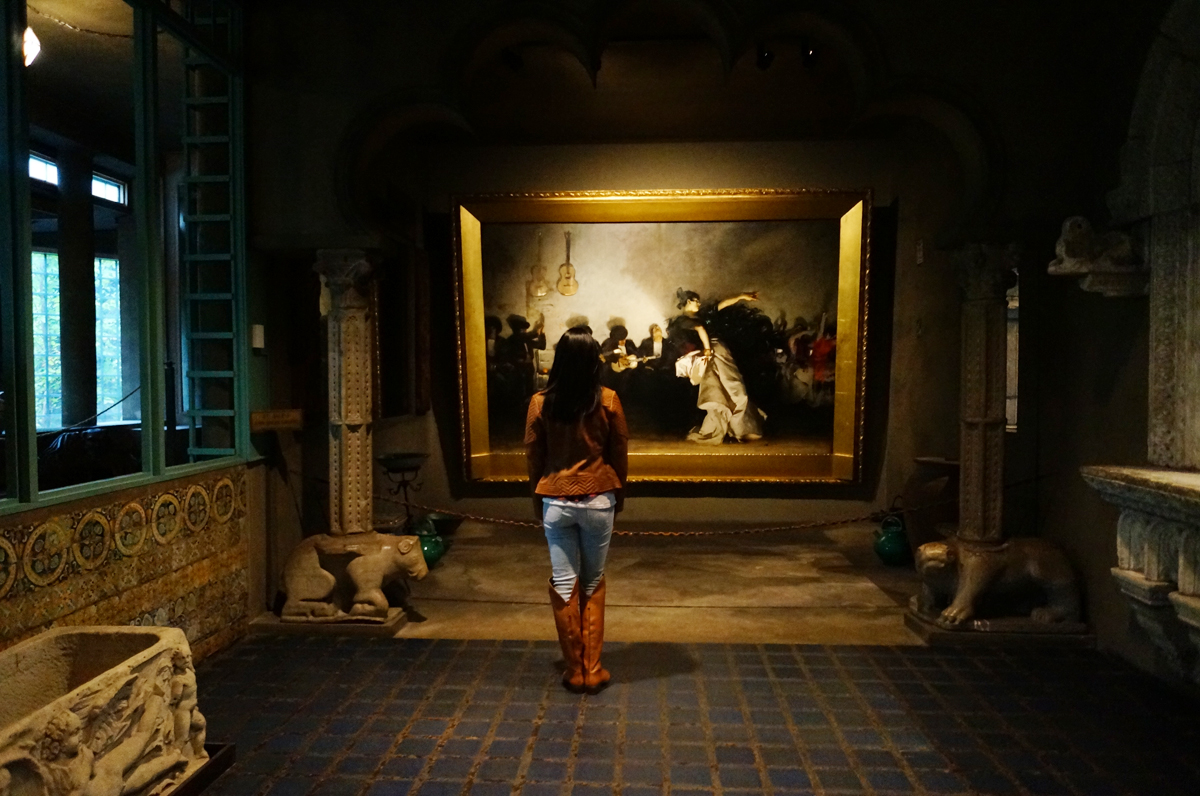 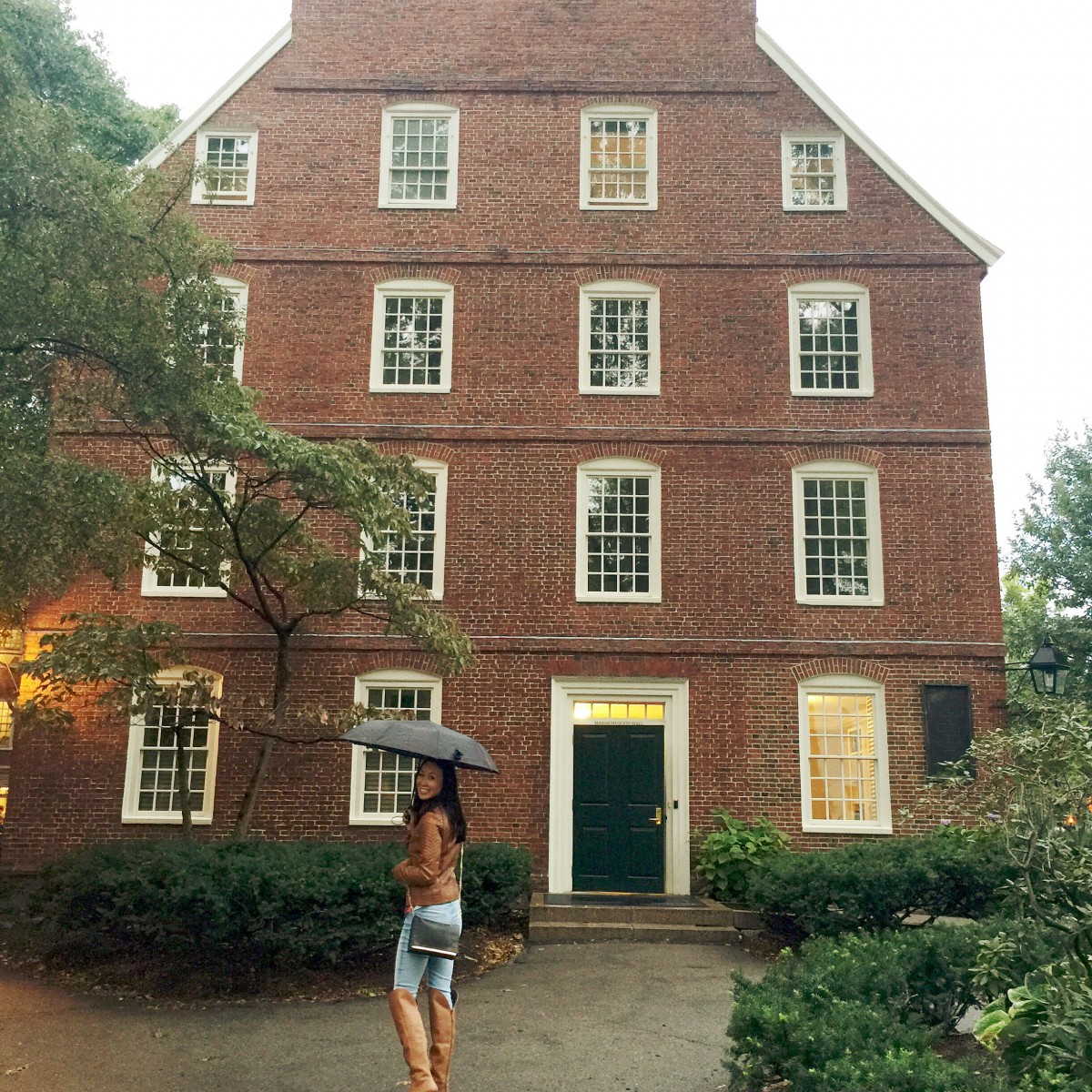 I’m so glad Sommer wanted to check out Harvard, I never thought about it since the greater Boston area has over 100 colleges and universities in the area – the crowd is young! But really the main ones are Boston University, Northeastern University and University of Massachusetts – Boston and Bunker Hill Community college. I remember watching HGTV and they said the median age was something like 26 in one area. Harvard is technically in Cambridge.

I should have studied harder in high school and went to Harvard, it’s gorgeous. Although the only person I knew who went to Harvard got a 1600 on her SATs and is an incredible lawyer today, a talented pianist and a former Miss Arizona America. Benjamin told me Harvard rejects a lot of valedictorians every year – so I guess that meant I would have never had a chance, bummer, but that also makes me feel better, kinda…? 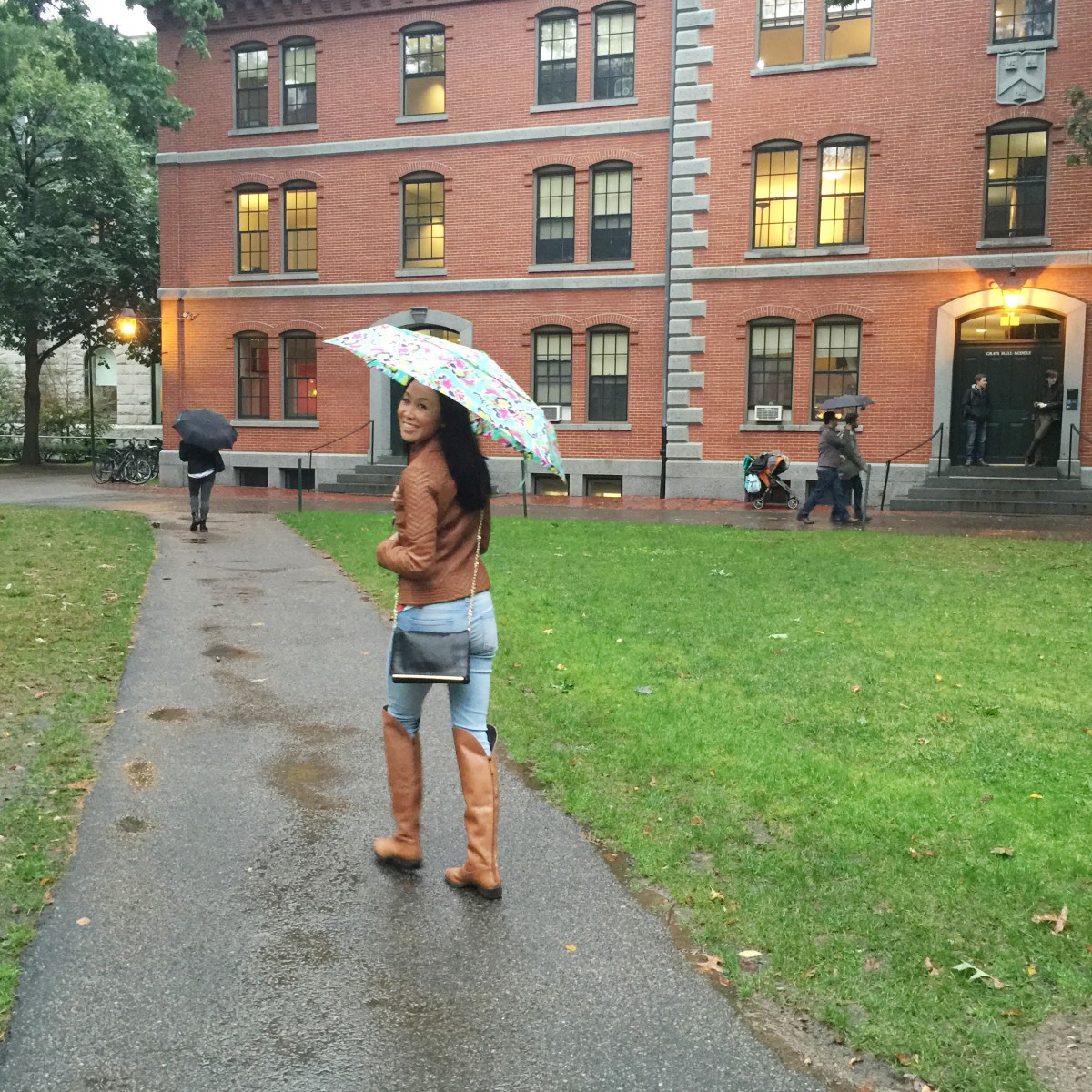 Sommer and I were hanging out in the student housing area and saw a wedding reception on the grounds in a giant covered tent. Can you imagine getting married at Harvard? Guessing they were graduates.

We asked a student who had quite an impressive mustache if he could point us to a bookstore, a Harvard one of course.

“We don’t really need books (as if it wasn’t already obvious we weren’t students), does it have Harvard stuff?” I clarified.
“Yes,” he smiled, “That’s the obnoxious thing about it.”

And now I have a Harvard tee.

We found some dinner – my side has the prosciutto on it, always a winner. 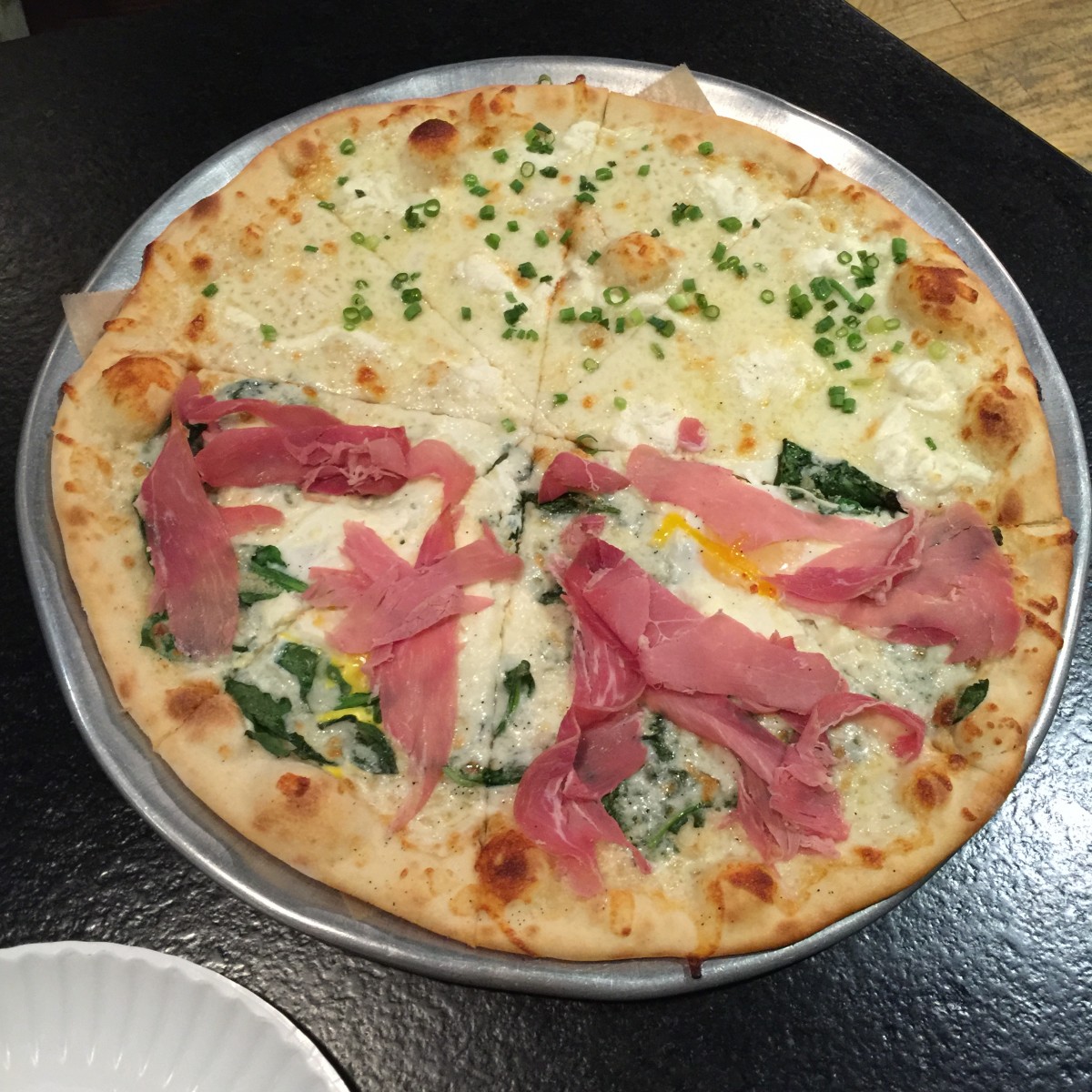 If I had all day, I would have started early morning and stopped to check out every historic spot along the Freedom Trail. The trail is marked by brick so you know if you’re going in the right direction. 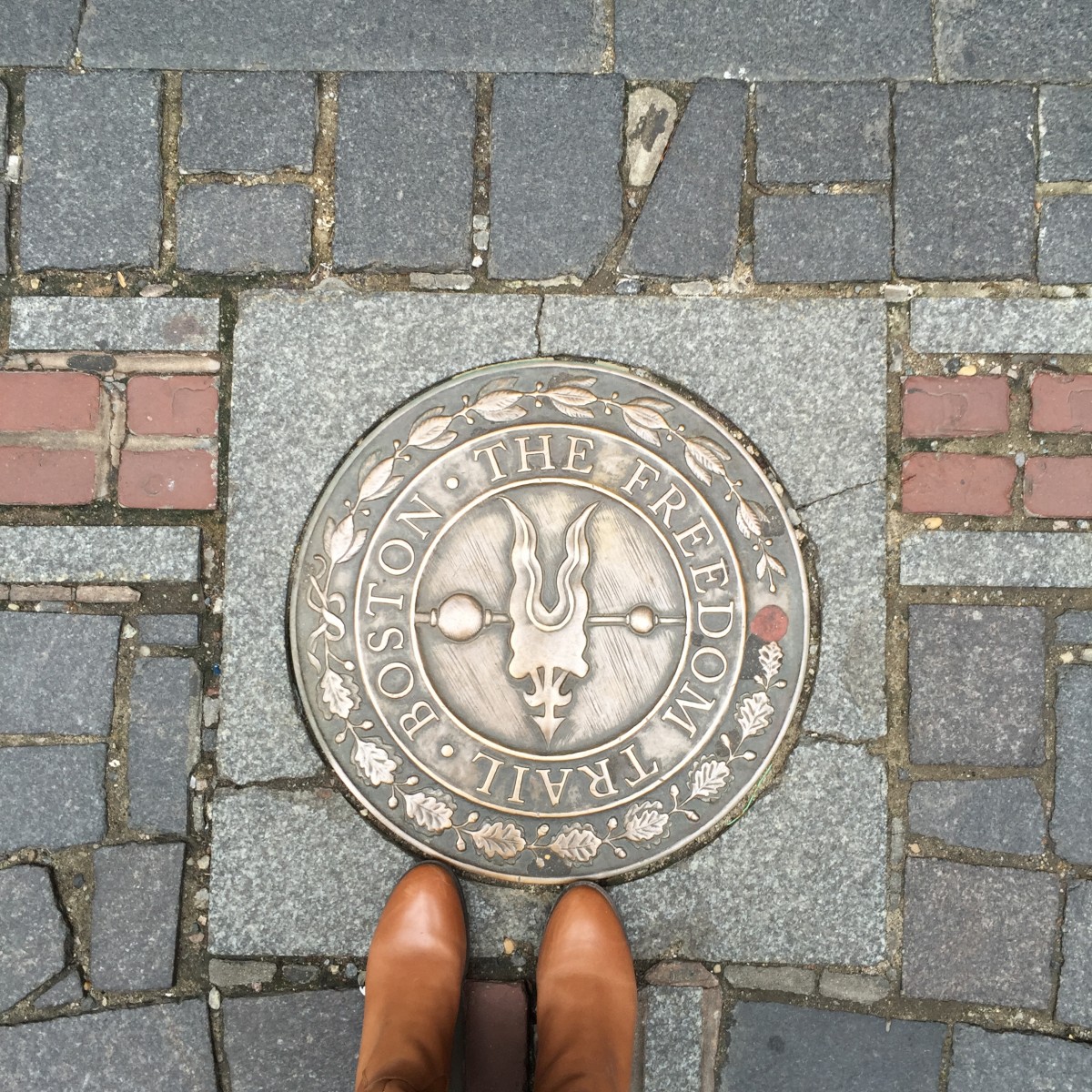 There were a few times we got sidetracked and had to go back and find the brick path. There’s s much going on it’s easy to get distracted. 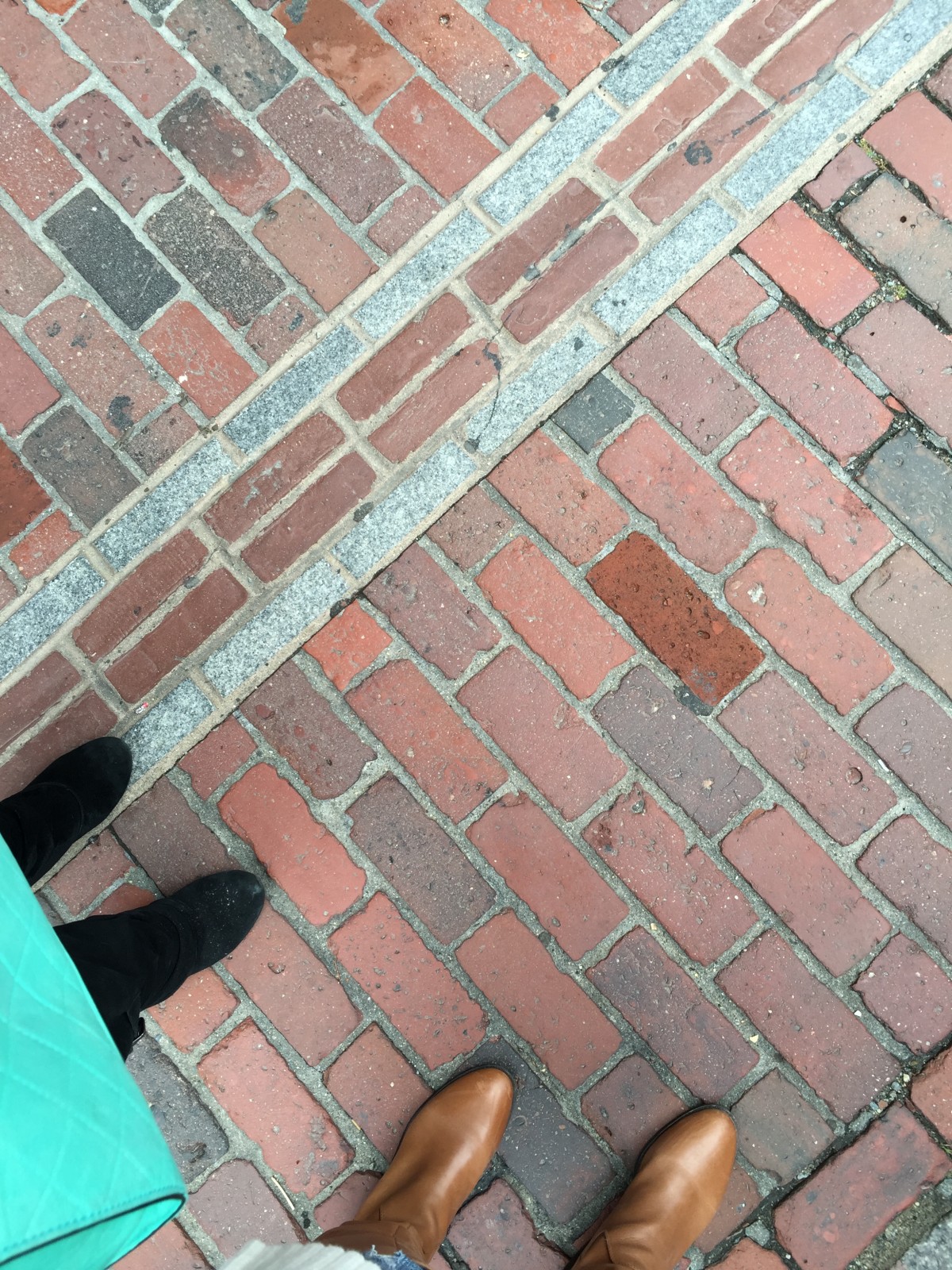 In effort to not totally jack up history because I could easily do that, let’s just say the Freedom Trail is a 2.5 mile path through downtown Boston that takes you through 16 locations that are significant to the history of the United States. 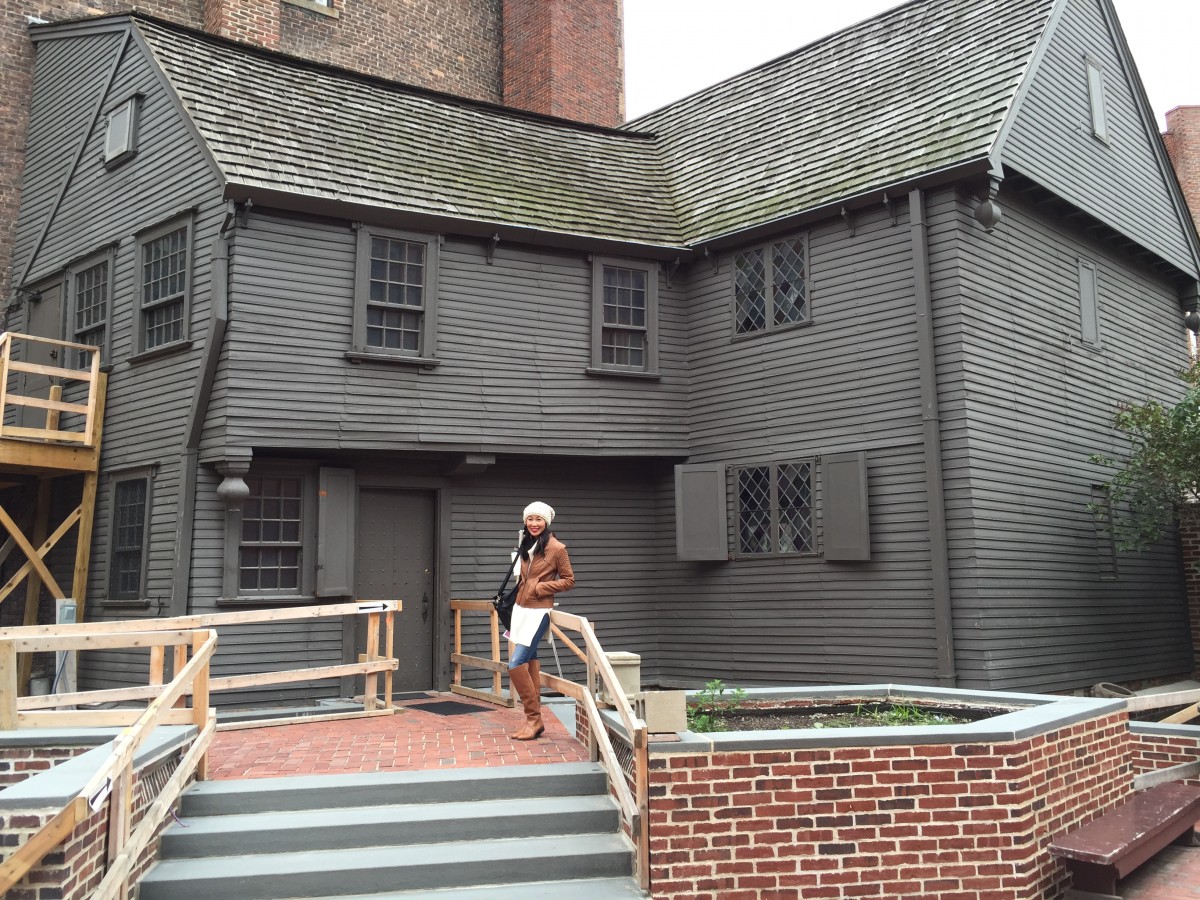 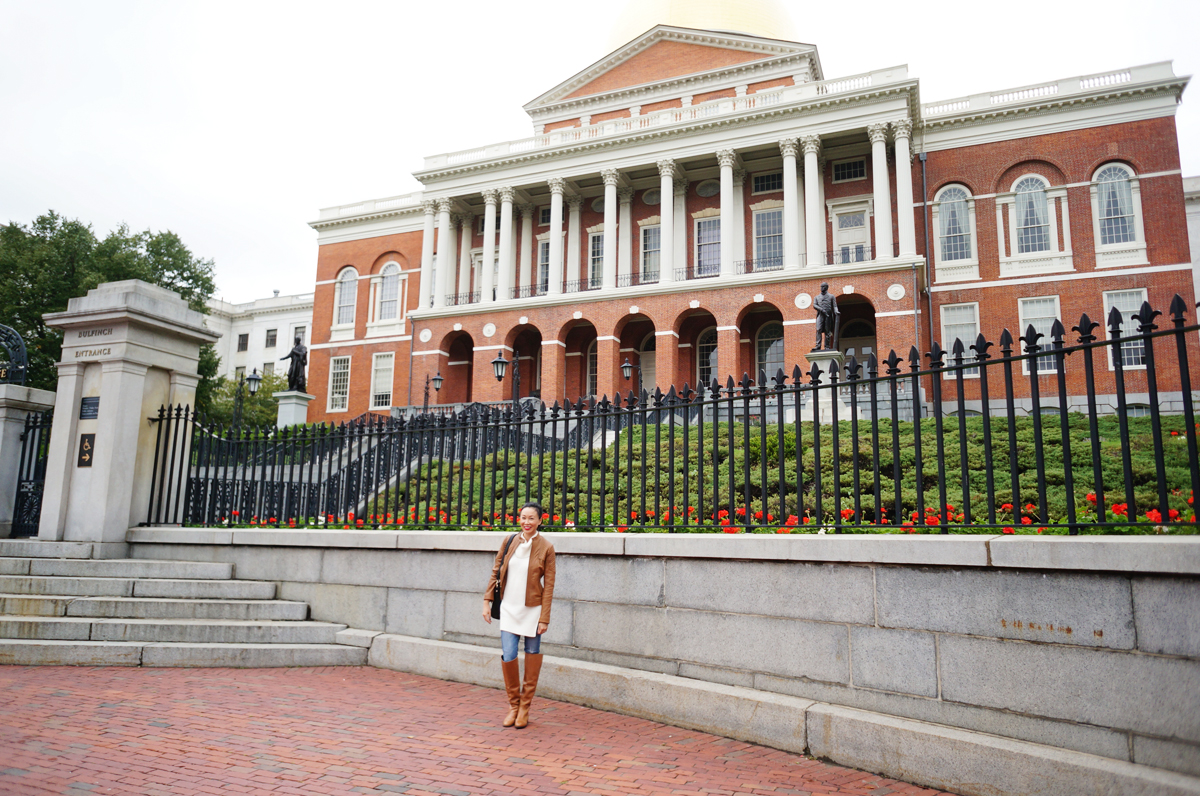 The Granary Burying Ground – established in 1660 and is the final resting place for Samuel Adams, John Hancock, Paul Revere and five victims of the Boston Massacre. 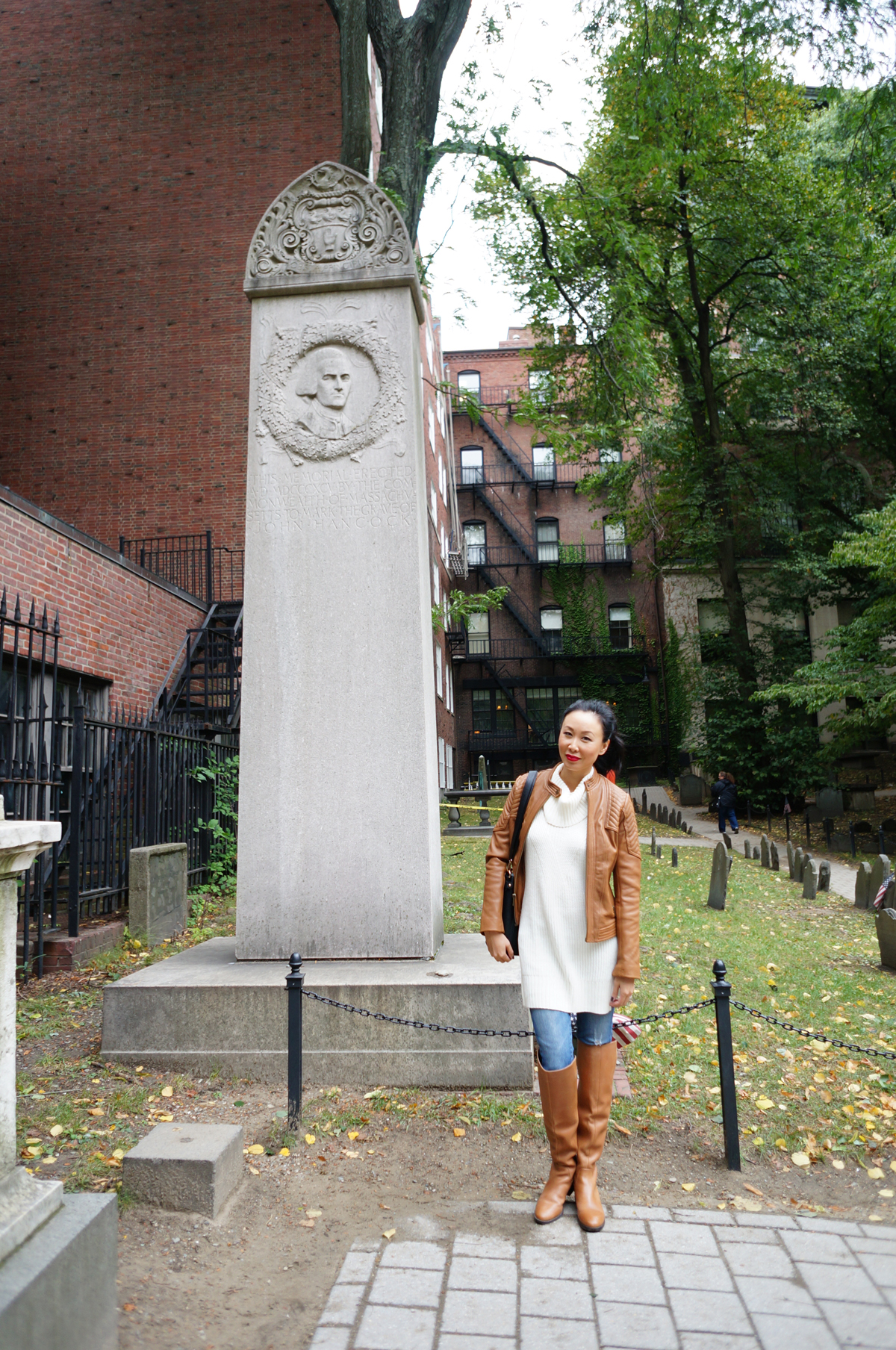 There I am by John Hancock’s grave. 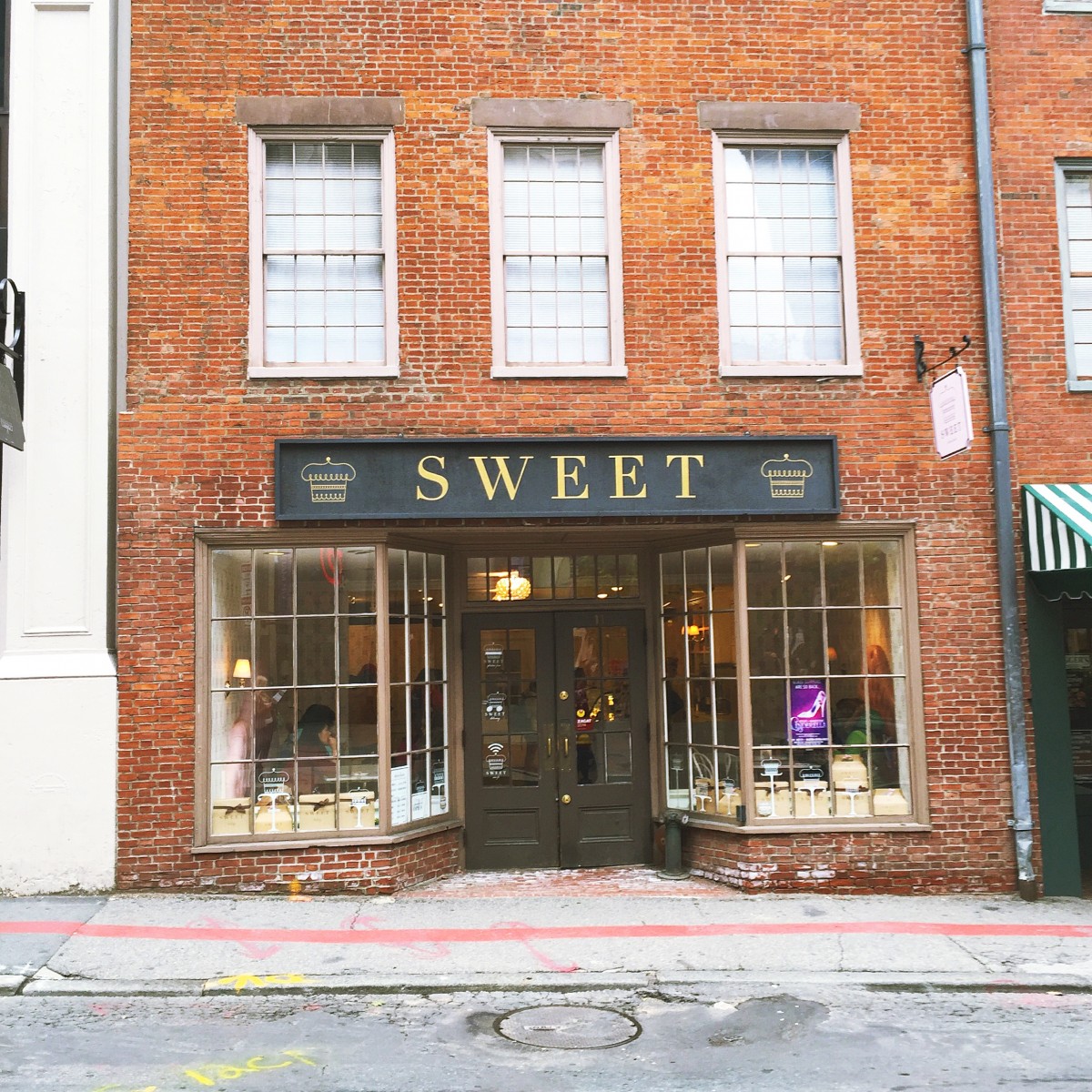 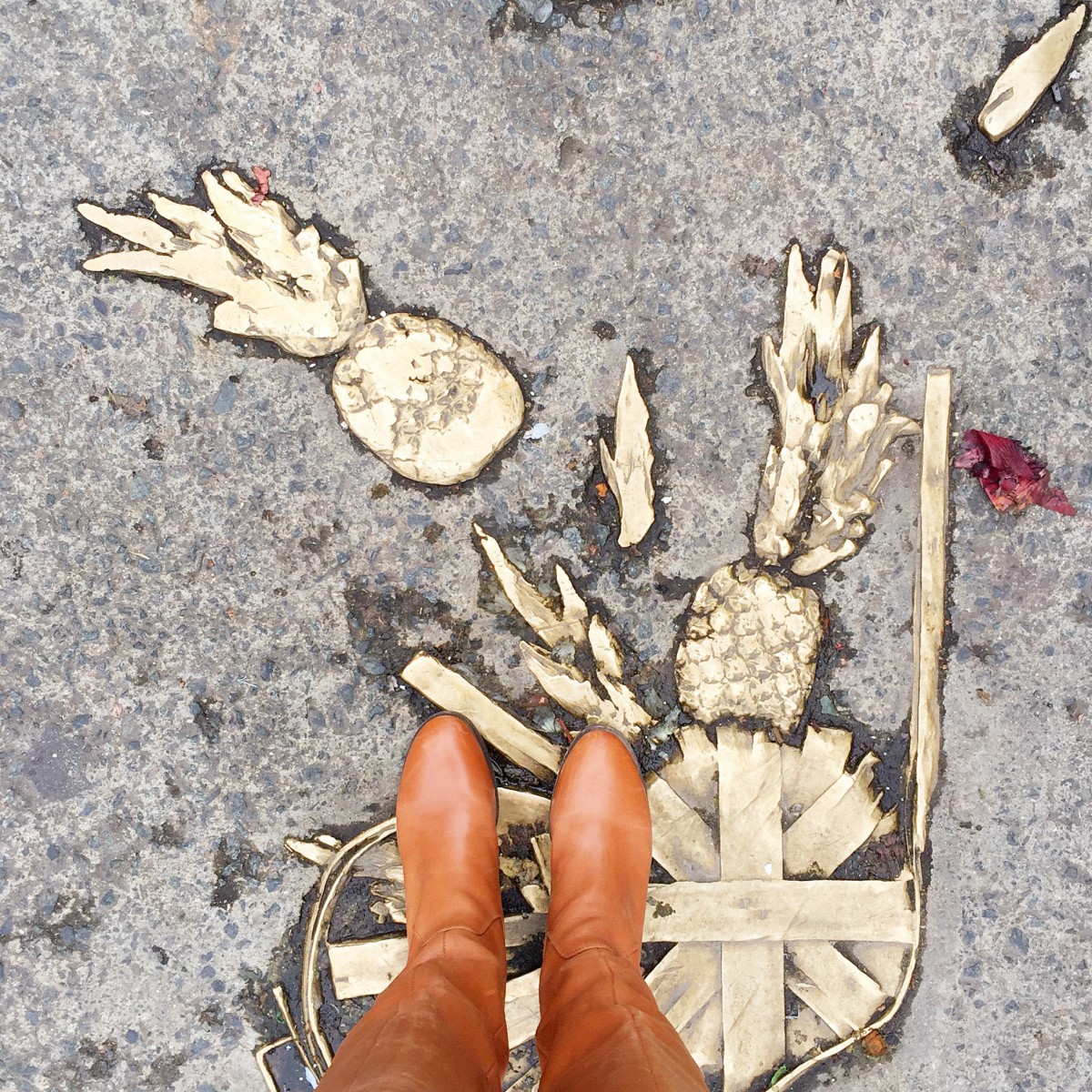 Next week I’ll share Salem because I think that deserves it’s own post! Until next time Boston, I hope Wayfair has a conference every year so I can go back – and maybe ride this? 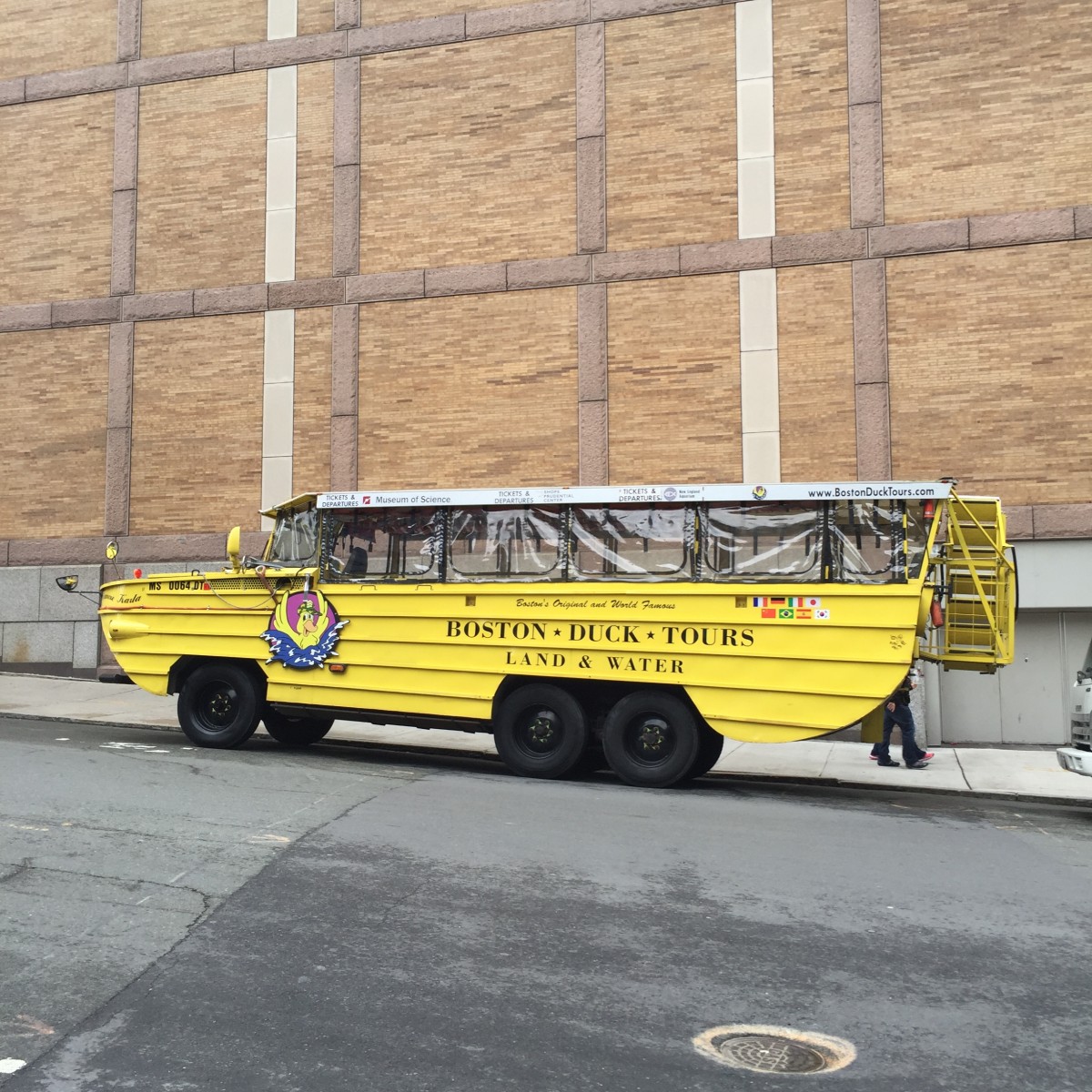 Have you been to Boston? What’s your favorite thing to do there?

There are 2 comments on Boston is the best!.